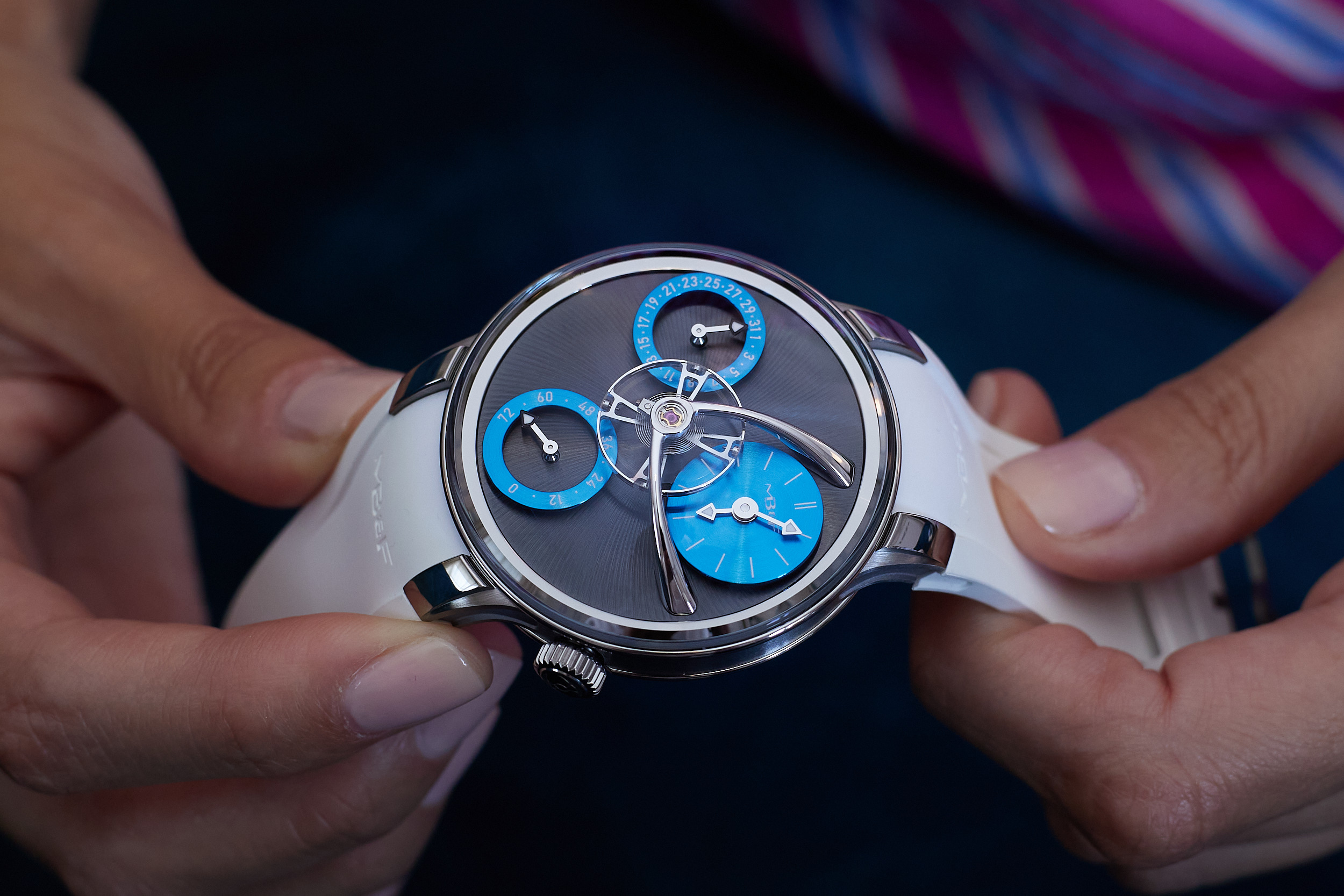 At the Geneva Watch Days, MB&F celebrated their amazing achievement of creating 20 calibers in 17 years as an independent watchmaker. They also introduced the icy-cool blue/grey LM Split Escapement EVO and a special edition for the Beverly Hills MB&F LAB opening soon.

The success of the last two years’ Geneva Watch Days has encouraged its organisers to hold the event once again in a very similar format: phygital, decentralised, self-managed and open to the public. The GWD 2022 brought together a group of some 30 brands representing the art of horology in various hotels, manufactures and boutiques across Geneva. This format gives the opportunity to the brands to showcase not only their novelties but in some cases, a snapshot of their own ‘world’ too.

MB&F is among the companies that clearly endeavour to present the identity and the mood of the brand beyond just watches. Their suite in the Hotel Beau-Rivage Genève this year got refurbished with more contemporary, Scandinavian and mid-century modern style furniture. Carpets in grey and in different shades of blue were laid down and great pieces from the M.A.D Galleries, such as the Swinging Sticks and other decorative kinetic objects became part of the interior decoration.

In one room they set up a little exhibition dedicated to their impressive accomplishment of releasing 20 different calibres from 2005, including several ‘Horological Machines’ and ‘Legacy Machines’. Lauding these calibres, MB&F published a portfolio booklet about the timepieces illustrated by different photographer friends of the brand.

MB&F has accentuated its strong identity with a lot of black and white materials since the beginning – publications, leaflets, boxes in black with white fonts. Now Max Büsser and his colleagues decided to lighten up the look with blue and grey/silver colours, aligned with the new M.A.D Galleries and new boutique configurations.

MB&F created the M.A.D.Gallery concept in 2011 in Geneva, in order to display their Horological and Legacy Machines in an appropriate setting (M.A.D. stands for Mechanical Art Devices). Since then, they have opened Galleries in Geneva, Dubai, Hong Kong and Taipei.

In collaboration with Voltige Design & Architecture, a highly experienced team with offices in Geneva and Lausanne, MB&F has redefined the interior design and architectural identity of its M.A.D Galleries in the past years – starting with the largest Gallery, located in the famous Dubai Mall. The fresh identity has also been applied to the growing number of MB&F shop-in-shops at the brand’s retail partners around the world and to a new retail format called the ‘MB&F Lab’. 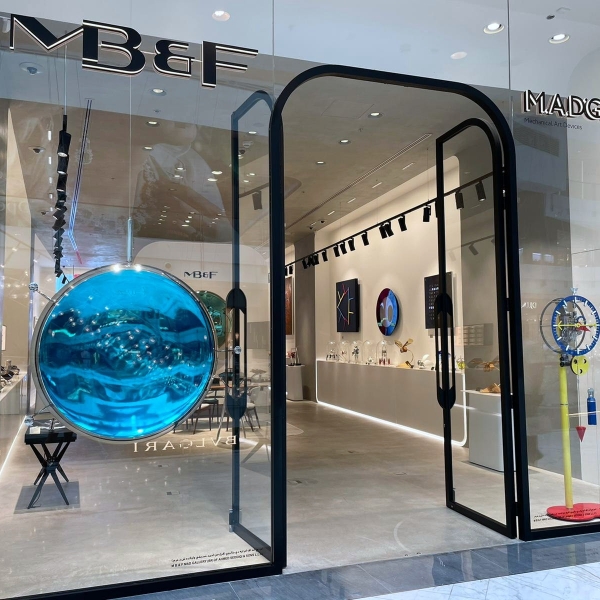 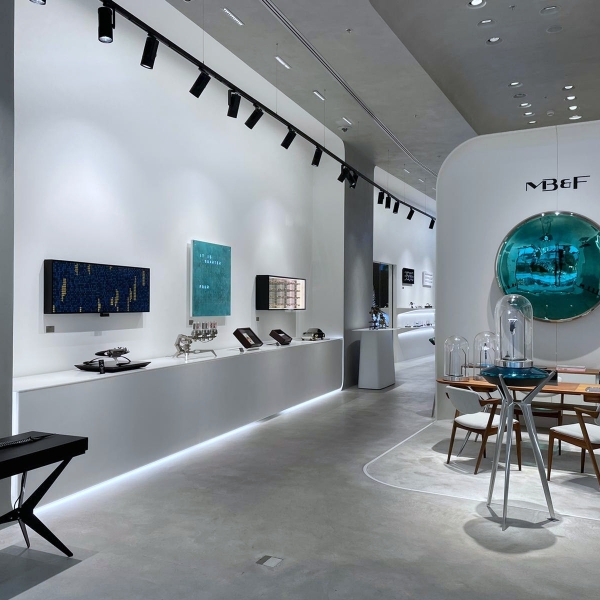 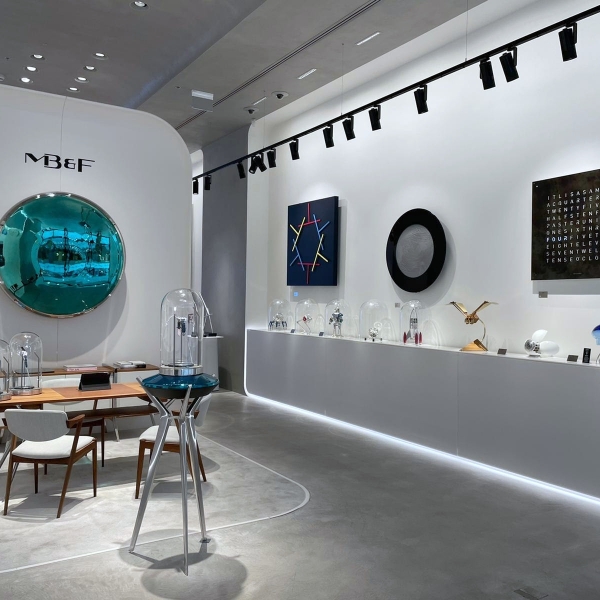 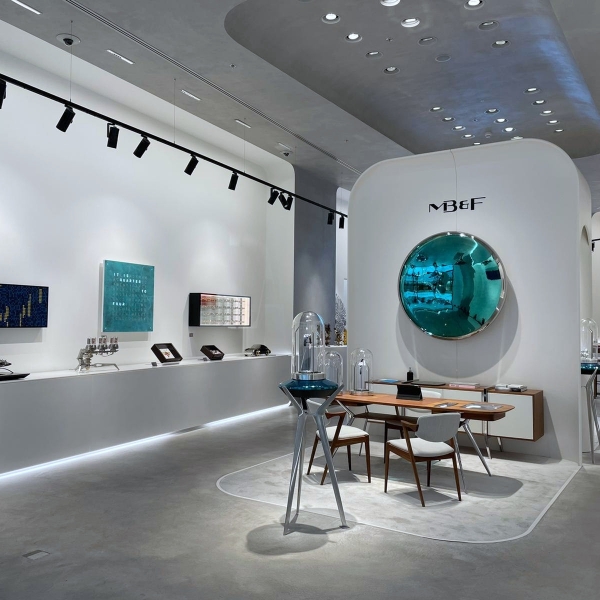 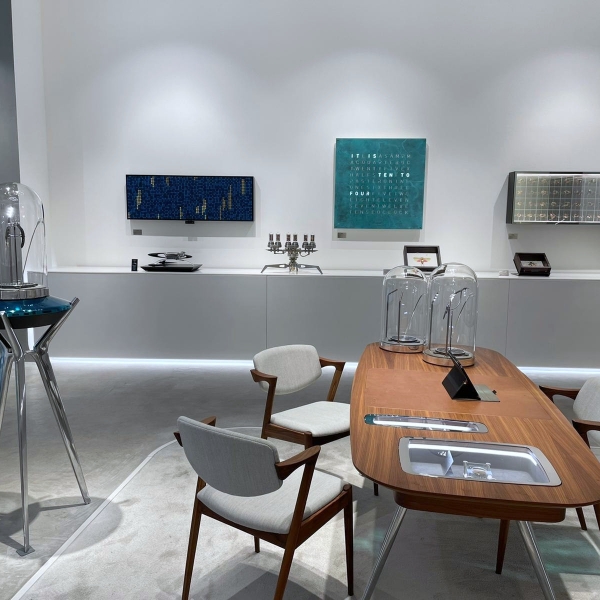 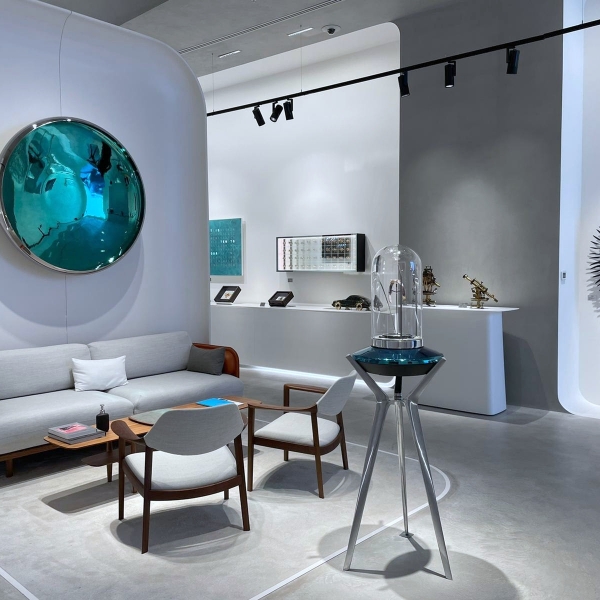 The new approach opts for spacious and bright surroundings with glass-domed showcases on steel tripods, mid-century chairs and sofas combined with tailor-made wooden surfaces and a bold central art piece (from a ceramic manufacture in France). As Voltige explains – ‘The result is an extension of the brand’s universe, with references to the golden age of science fiction and retro-futurism as well as an homage to the craftsmen and designers of the last century.’

The Dubai space reopened at the end of last year and the design concept will be visible throughout the other MB&F initiatives in the upcoming months and years.

The round cased Legacy Machine collection featuring iconic haute horlogerie complications á la MB&F celebrated its 10th anniversary last year. Since the first pieces, the line has made quite a buzz in the fine-watchmaking world. An important part of MB&F’s philosophy is to work with artists and watchmakers who they admire – this has been the case while creating the Legacy Machines and it is a great part of the success.

For some of the calibres (like the LM Perpetual, the LM Split Escapement or the LM Sequential EVO this year) MB&F teamed up with Stephen McDonnell (the independent Irish watchmaker and former head instructor at the WOSTEP watchmaking school). 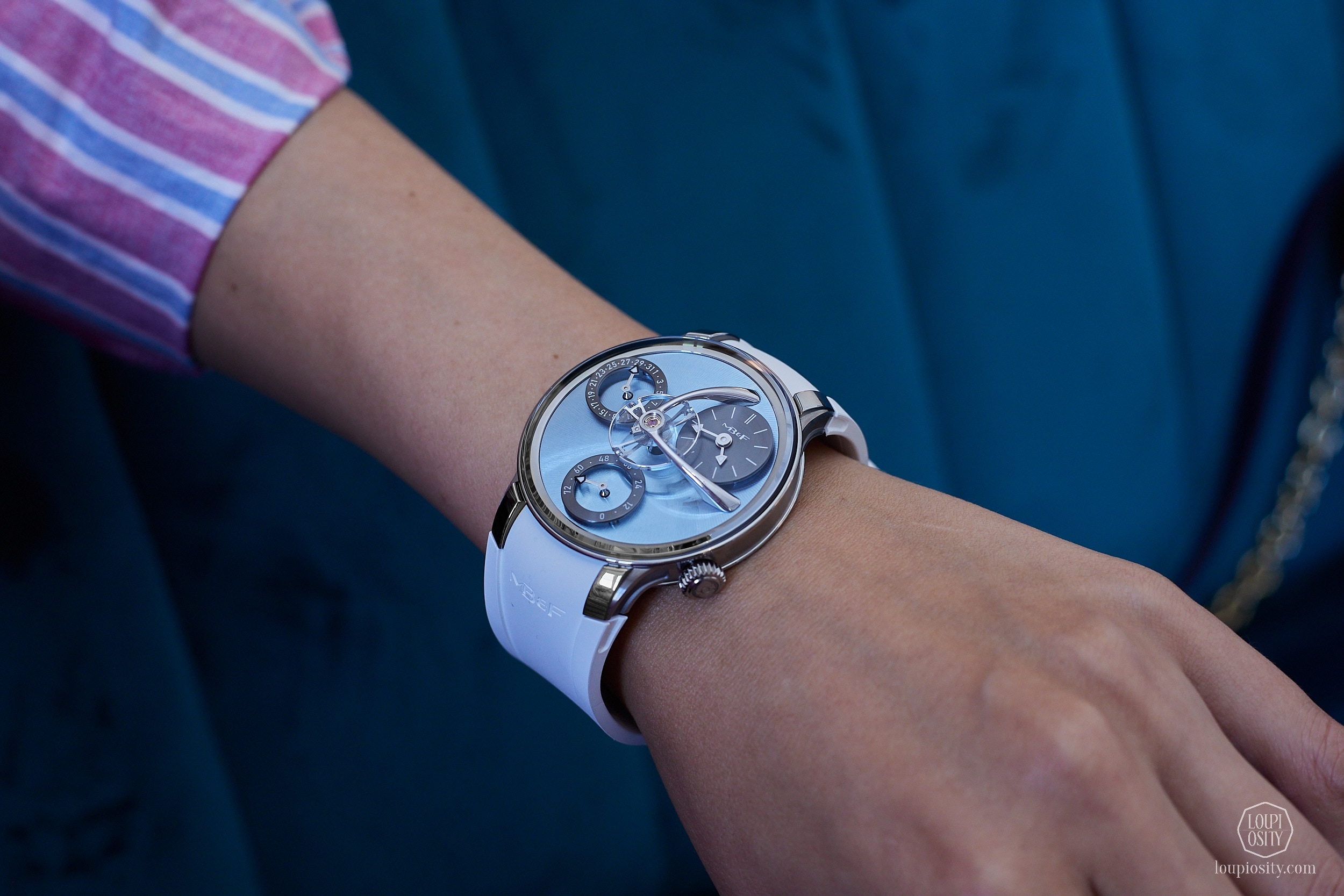 Released in 2020 and a variation of previous Legacy Machines cases, the EVO case provides enhanced wearability. These cases have 80-metres of water resistance, a screw-down crown, an integrated rubber strap, a bezel-free design and a monobloc shock-absorbing ‘FlexRing’ system.

The latest novelty, the LM Split Escapement EVO houses the movement developed for MB&F by Stephen McDonnell. He created a large balance staff that spans over the entire movement, leaving the large balance wheel on its own in the front of the watch, and moving the remaining parts of the escapement – the anchor and escape wheel – to almost 12 mm below, to the opposite side of the movement – hence the name ‘Split Escapement’.

The 44 mm timepiece is now available in two blue versions – the first comes in grade 5 titanium with an icy blue baseplate and slate grey dial, opened counters and darkened treatment on the dial side to underline the contrast with the very cool toned dial base.

The second version is the Beverly Hills edition – the first of a series of limited editions that will be reserved exclusively for the MB&F LABs. The Beverly Hills MB&F LAB is managed by the renowned American watch retailer Westime, combining MB&F timepieces with a limited number of art pieces. The limited edition of 25 pieces come in a grade 5 titanium case with black baseplate and striking blue dials. 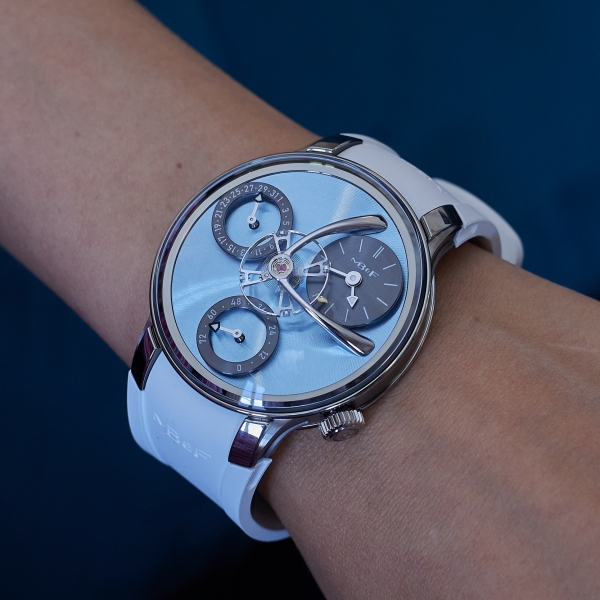 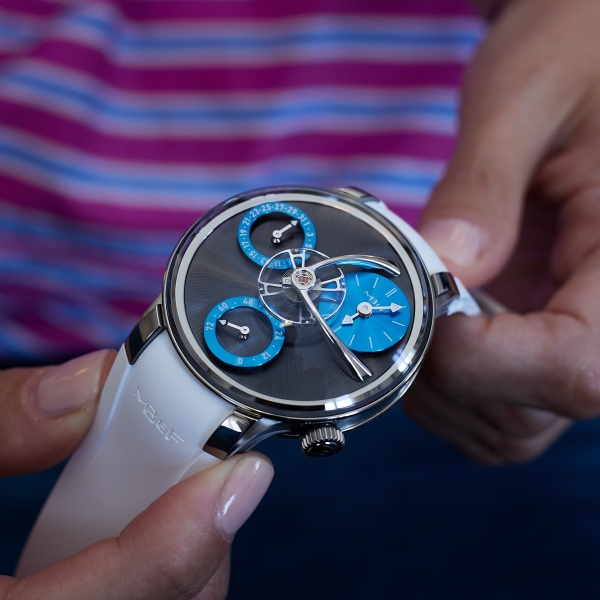 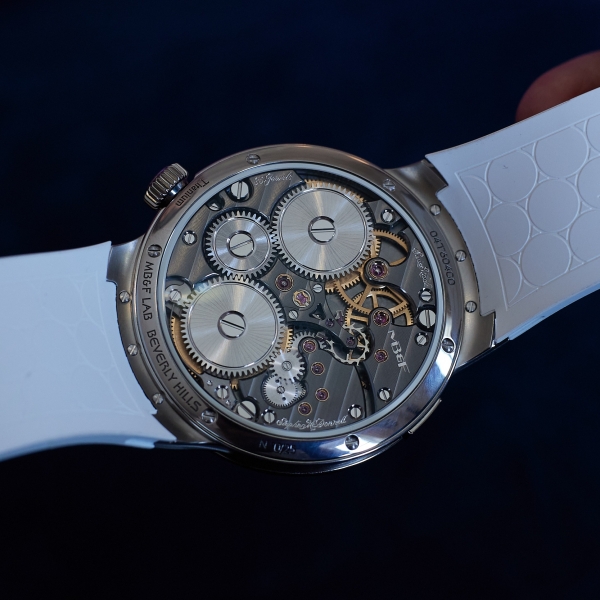 New views An overview about a few upcoming finewatchmaking events - hopefully all in real life - follow us along.Bernhard Lederer Central Impulse Chronometer One of the most pleasant meetings at the Geneva Watch Days revealed one of the most exciting horological masterpieces introduced at the event. Bernhard Lederer showed us his Central Impulse Chronometer at the Beau Rivage Hotel.George Daniels timepieces at the Phillips GWA XVI The late summer Geneva Watch Days gave Phillips Watches an excellent opportunity to showcase some of the world’s finest collectors’ watches to be auctioned this Autumn. The batch includes three fantastic examples by George Daniels.