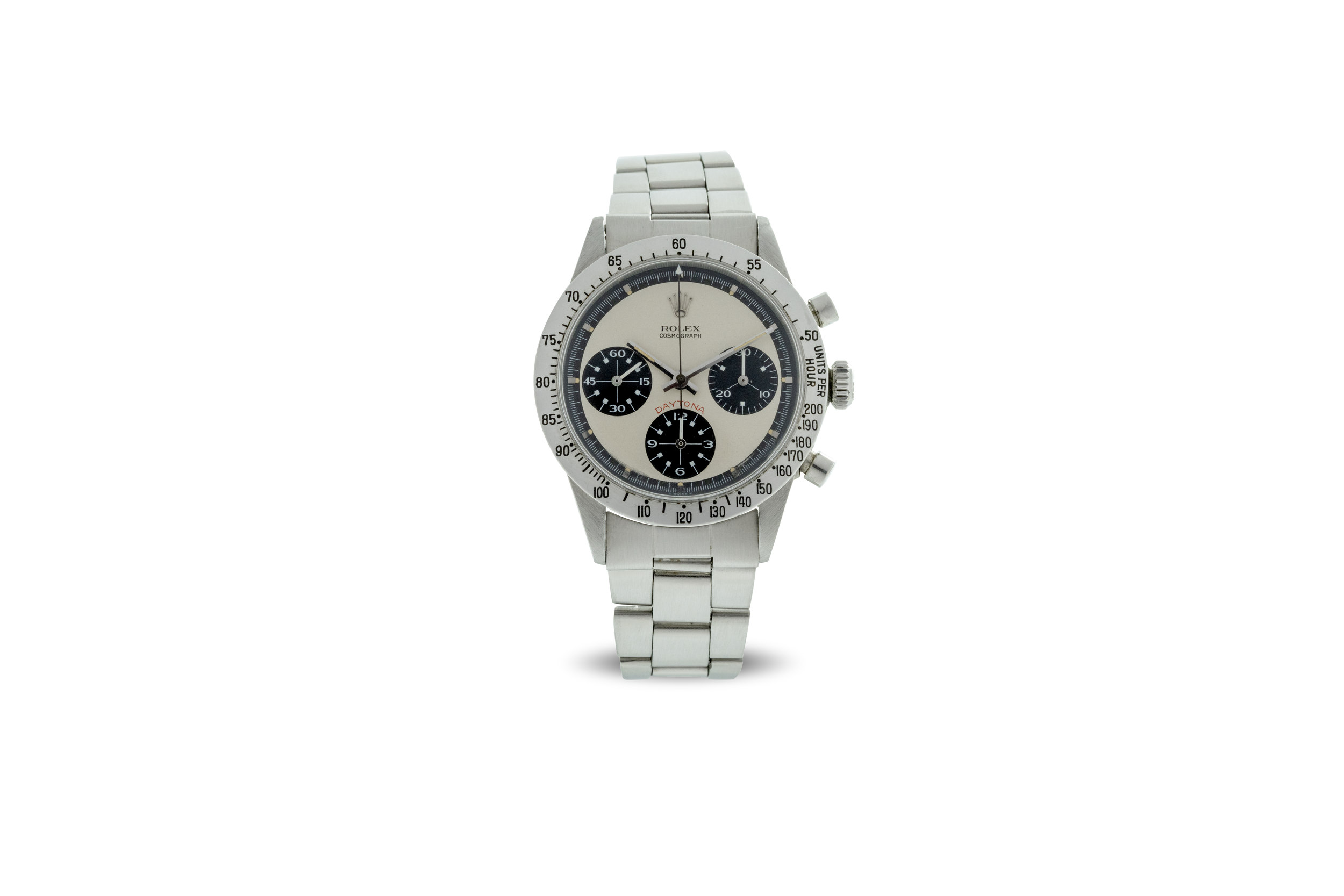 The OAK Collection, owned by Patrick Getreide, is part of the over 600 ‘One of A Kind’ vintage and contemporary museum-quality watches that include special orders, ultra-rare limited editions, the most valuable examples of particular models and the largest privately held ensemble of Patek Philippe pieces once owned by celebrated collector Henry Graves Jr. On 19 May, 162 fantastic examples embark on a four-stop exhibition world tour from the London Design Museum (19-25 May). 4 out of the 11 exhibition chapters are dedicated to pieces of Rolex and independent brands.

Beyond Patek Philippe rarities, Mr Getreide enthusiastically collects the finest examples of Rolex and independent brands’ timepieces. We introduced the OAK Collection and the Patek Philippe chapters here, this article provides an overview about the Rolex & independent chapters.

The exhibition is open for a limited time only: 19-25 May, 2022 in London. It will then move to the Bahrain National Museum, China and the USA later in 2022.

First introduced in 1963, Cosmograph Daytonas are probably the most sought-after Rolex models. They were initially intended for the fans of fast cars, yet their success was not always what it is today. Since 2000 the series has been produced with the calibre 4130 in-house automatic certified Swiss chronograph movement, which is famous for its reliability and precision. The interesting variations of dials and the classic 60s/70s look are highly praised by collectors.

The 1966 Cosmograph Daytona Ref. 6239 presented in this section is very special. Not only because it has the sought-after ‘Paul Newman’ dial (originally called the ‘exotic dial’, which Rolex only used during a short period of the model’s production cycle), but also because it was owned by NASA astronaut Walter Cunningham who piloted the Apollo 7 lunar module. 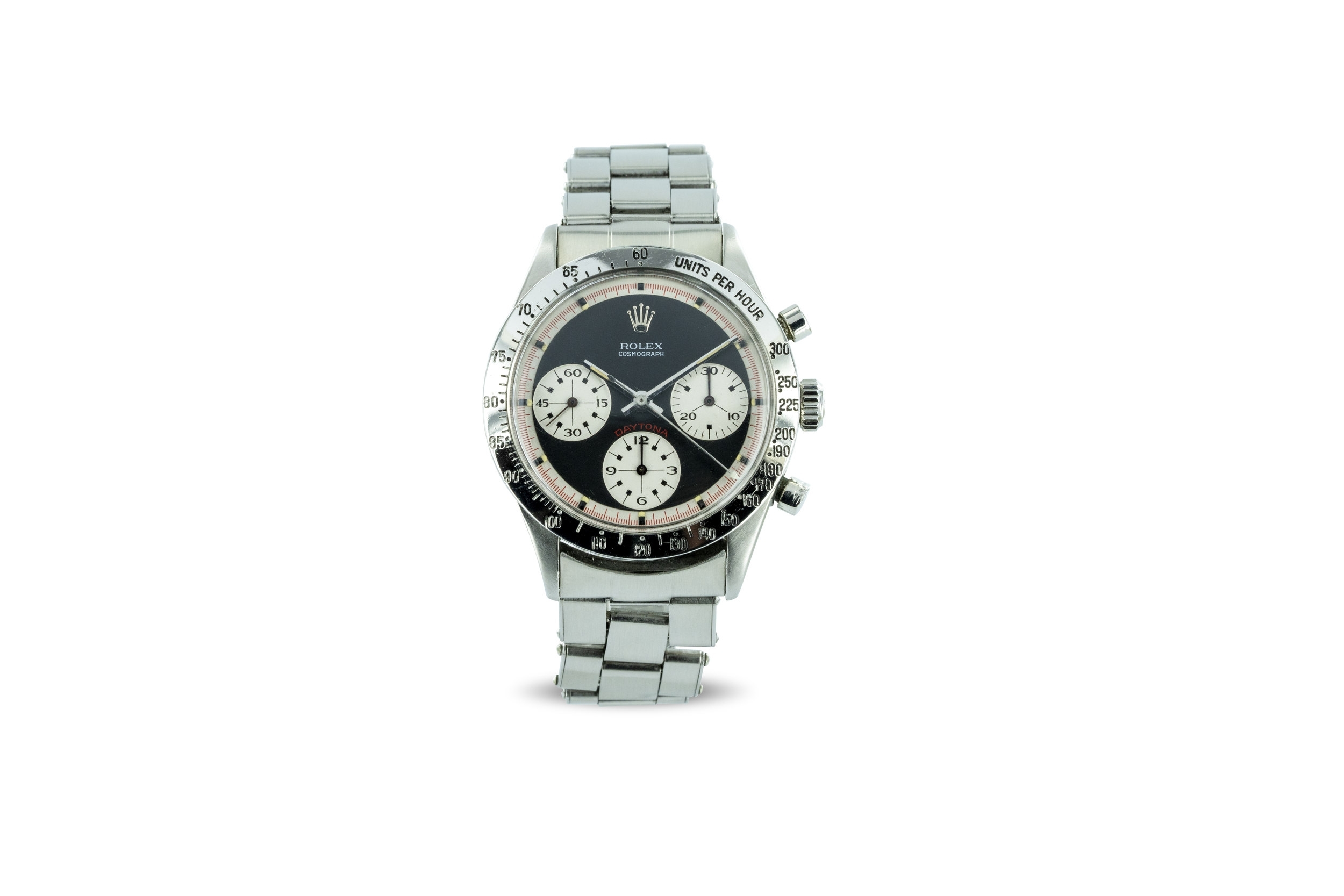 Other collector pieces are the ‘Big Red’ Daytonas, which feature a red ‘Daytona’ signature on the dial above the sub-dial with the hour counter at 6 o’clock. You can find these on the black and silver dials. The exhibited model is a Ref. 6263. For greater water resistance this model was fitted with screwed-down ‘millerighe’ pushers and the Oyster Twinlock 700 crown, which have brought unexpected success to the Daytona. 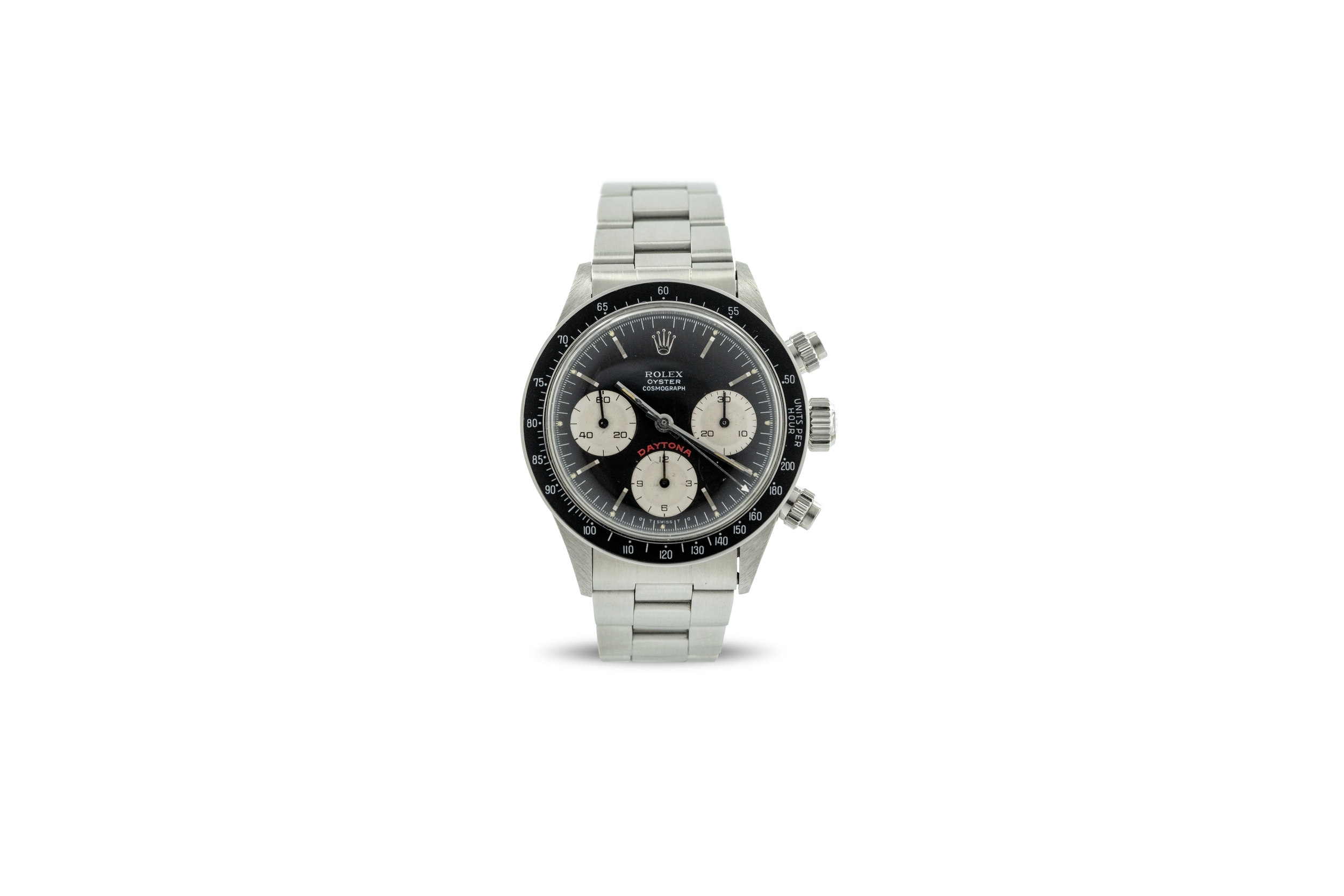 The Rolex GMT Master two timezone watch was originally developed upon the request of Pan Am in 1954. The airline wanted to provide a timepiece for pilots that allows the simultaneous reading of the home or reference time and the destination or local time. The red and golden arrow-ended hand points to the hour in the second time-zone. The bezel was made from steel with a Plexiglass insert, one half of which was coloured blue to represent the night and the other half red to represent the day. It was simple to set the 24-hour hand so that it showed the time at the destination on the bezel, leaving the main hour hand on ‘home’ time.

British actress Honor Blackman wore the Rolex Ref. 6542 GMT-Master in the James Bond Goldfinger movie, while playing the Bond girl Pussy Galore. This reference was made between 1954 and 1959. 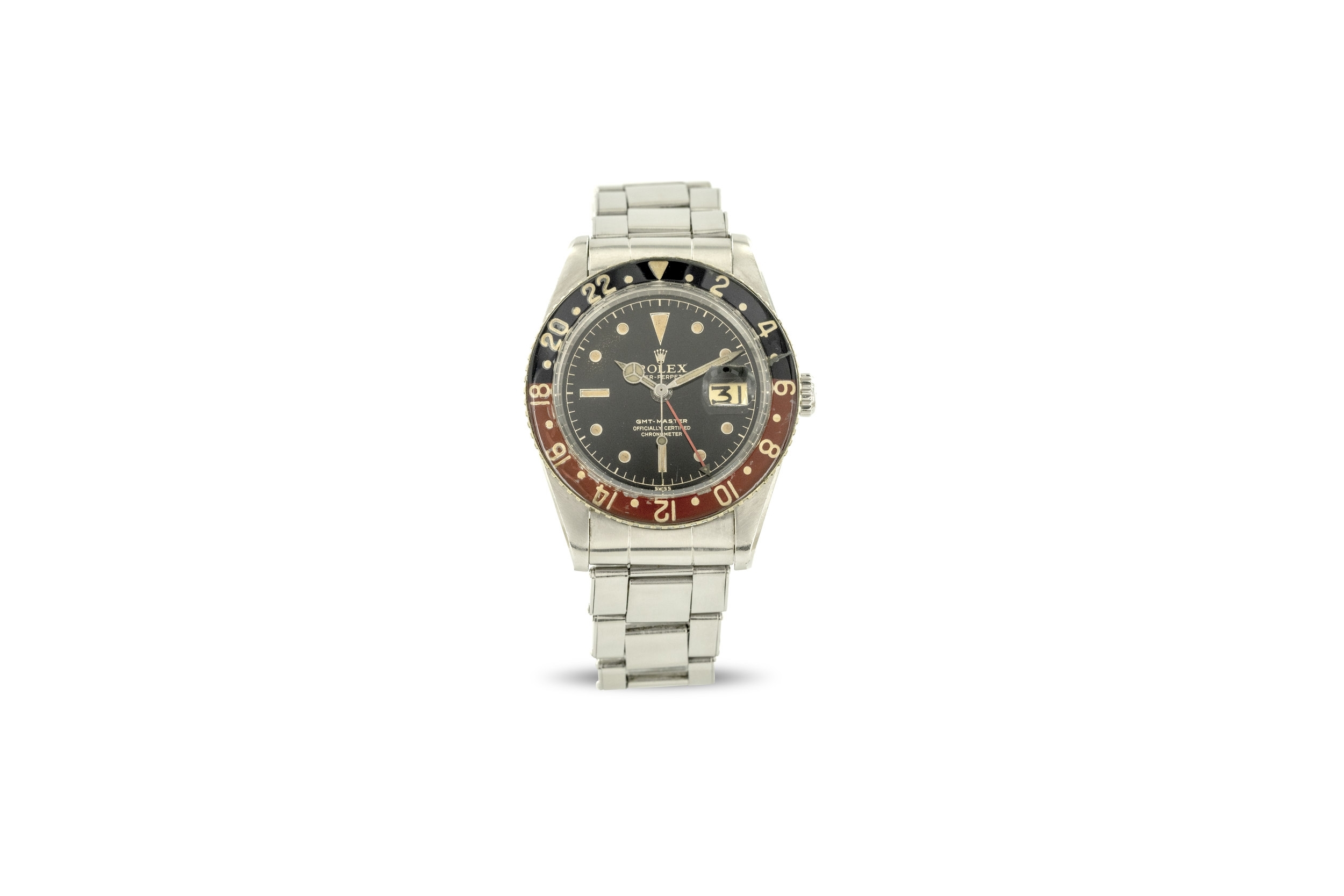 Sports watches are not destined to sit in safes, but instead for use even in rough circumstances. Naturally, it is very hard to find vintage sports watches in great condition. But from the OAK collection a nine watch selection represents several of the most coveted Rolex sports models made by the firm since the landmark ‘Explorer’ was launched during the 1950s – all in very good condition.

The first generation of Rolex’s diver watches was the Submariner, the first editions of which were issued at Basel in 1954. Several models were made of the Submariner, both chronometer and non-chronometer versions. Rolex have constantly pushed the boundaries in terms of certified depth mainly by developing the case further and applying the famous helium escape valve. This invention has been key to ensuring that the helium penetrating the timepiece is eliminated at a similar rate as from the human body – normally the gas dissolves from tissues faster than from a sealed watch. By using the valve, pressure gets equalised faster and the crystal does not pop out during decompression like in the early versions. Rolex has developed the valve with continuous real-life tests performed by Comex, the French industrial deep-sea diving company. Mr Getriede has an example of a 1972 version originally supplied to Comex.

James Bond significantly contributed to the success of the Rolex Submariners, showcasing it on Bond’s wrist in many films. This obviously meant that the watch was required to have resistance to Bond’s frenetic lifestyle while ruthlessly demolishing that of his conquests.

At the end of the 60s Rolex released the first Submariner with a date (in the recent Submariner collection of the brand you can find only one version without a date), the Ref. 1680. The exhibited piece is a Submariner from 1969 with an ultra-desirable red script and ‘tropical’ bezel. 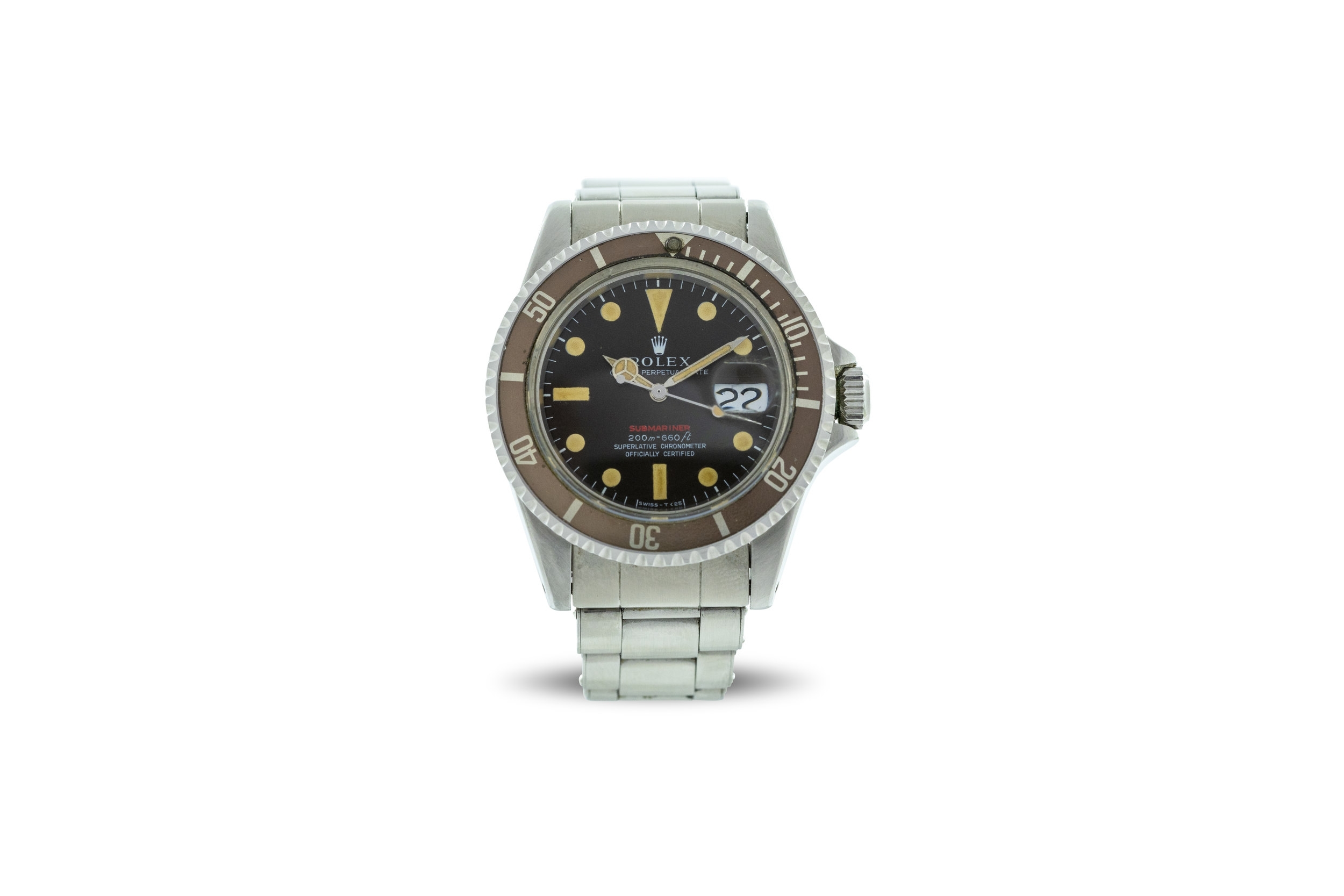 Patrick Getreide appreciates contemporary watchmakers and creations. During the eight editions of the biennial Only Watch charity auction, he bought 10 unique pieces from names as diverse as H.Moser & Cie., Chanel or Kari Voutilainen. From the latter he has five timepieces exhibited, all in pristine condition.

The OAK Collection exhibition will give visitors the rare chance to see the famous ‘Ruthenium set’ from François-Paul Journe, one of the most influential and eminent independent watchmakers of our time. The set comprises a Chronomètre à Résonnance, an Octa Calendrier, a Tourbillon Souverain, an Octa Chronograph and an Octa Auto. All date from 2002, a time when the maker’s excellence was only just beginning to gain recognition, and all have movements made from ruthenium-plated brass – making them extremely rare and hugely collectable. 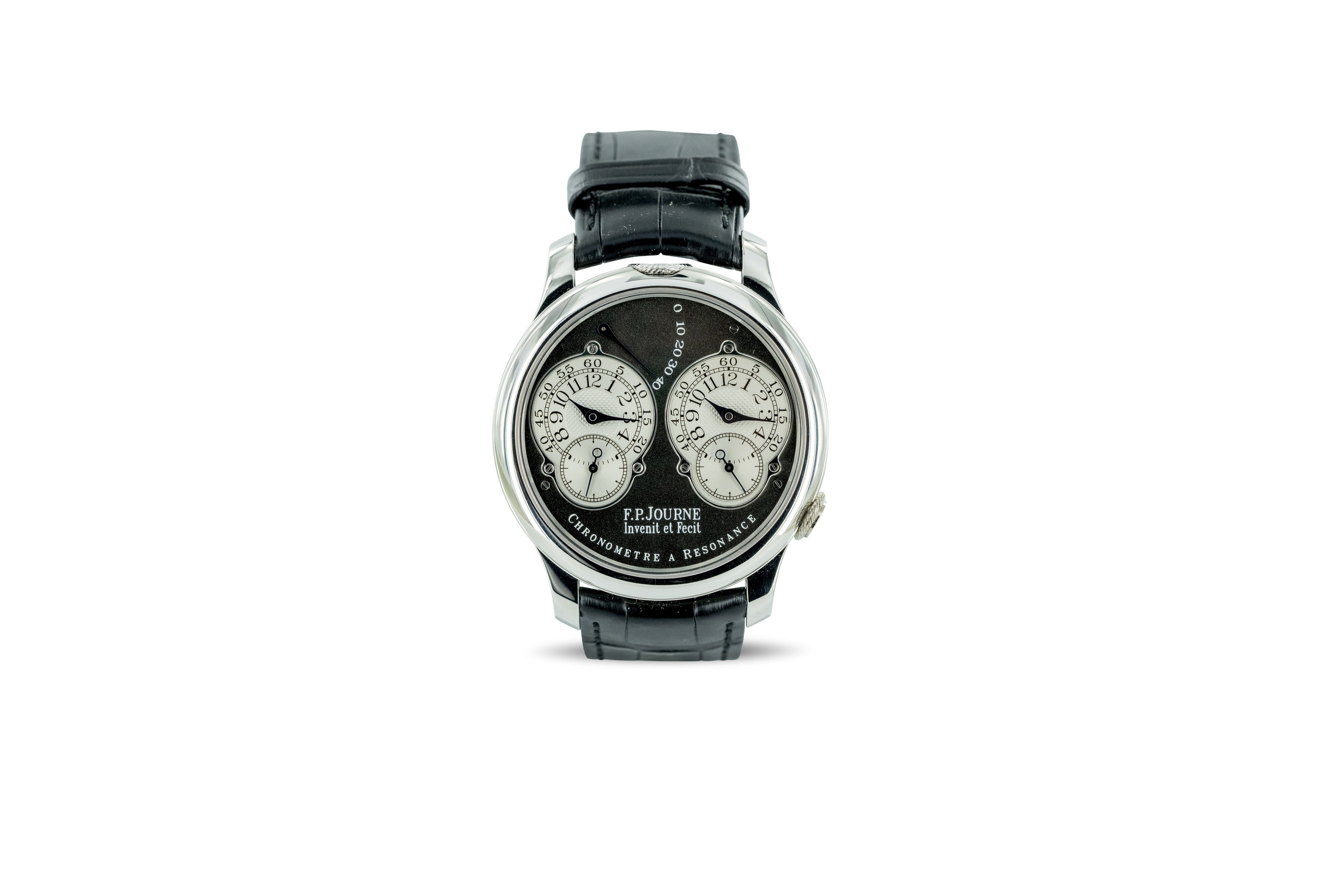 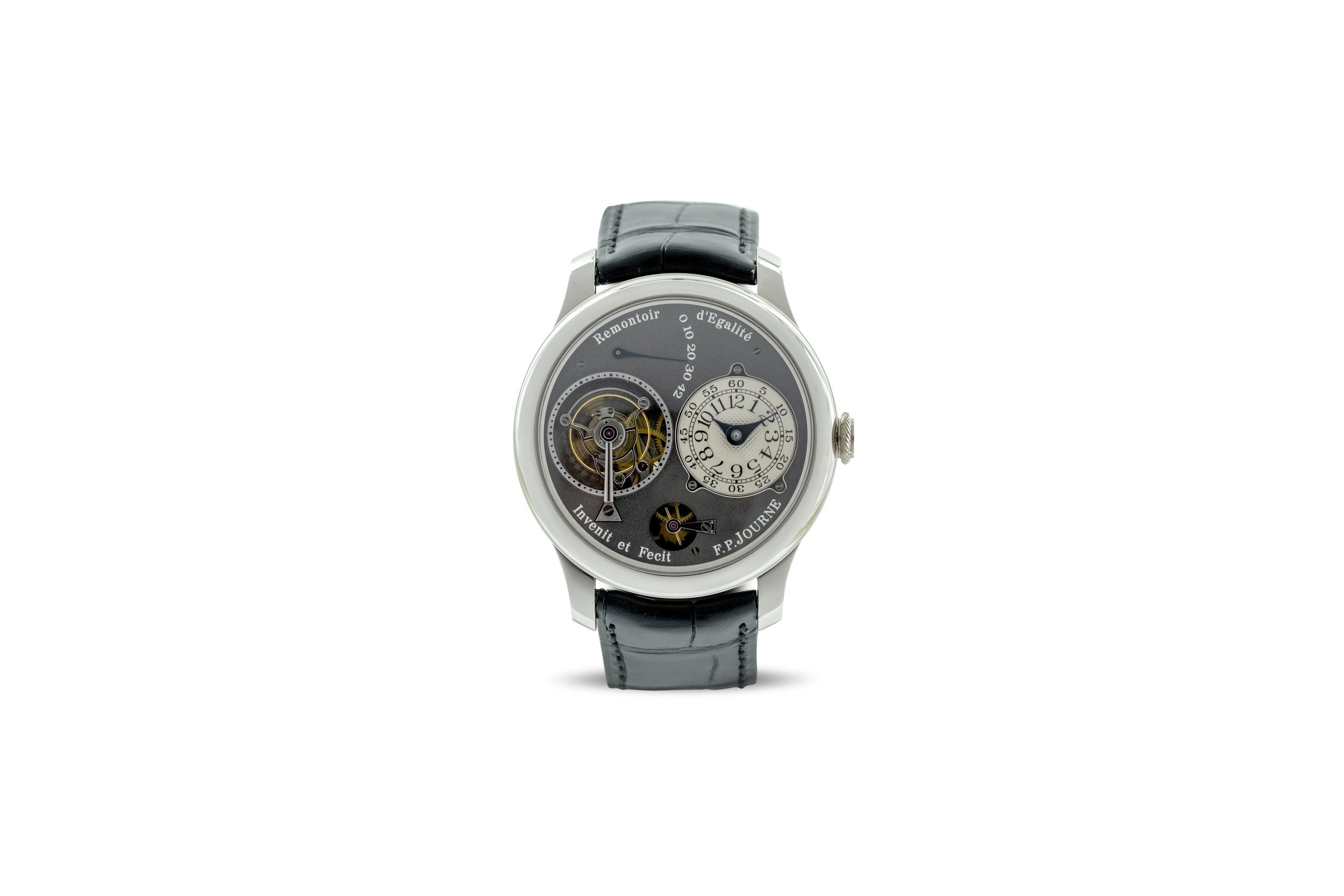 Photo credits: The OAK Collection
All registered trademarks are property of their respective owners.
All rights reserved.

The OAK Collection exhibition On 19 May, 162 vintage and contemporary museum-quality watches of the OAK Collection embark on a four-stop exhibition world tour from the London Design Museum (19-25 May). We sum up the 11 exhibition chapters and give you updates as we participate in the pre-opening ceremony on 18 May.The OAK Collection - Patek Philippe Chapters Astonishing Patek Philippe examples make up the two-third of the OAK Collection, also home of the greatest private holding of Patek Philippe for Henry Graves Jr. timepieces. Between 19-25 May, these and dozens of the rarest watches will be on show at the London Design Museum, the first location of a four-stop exhibition tour.Phillips - The Geneva Sessions Besides the brands, the watch department at Phillips auction house also showcased some of the world's finest collectors' watches at the Geneva Watch Days.