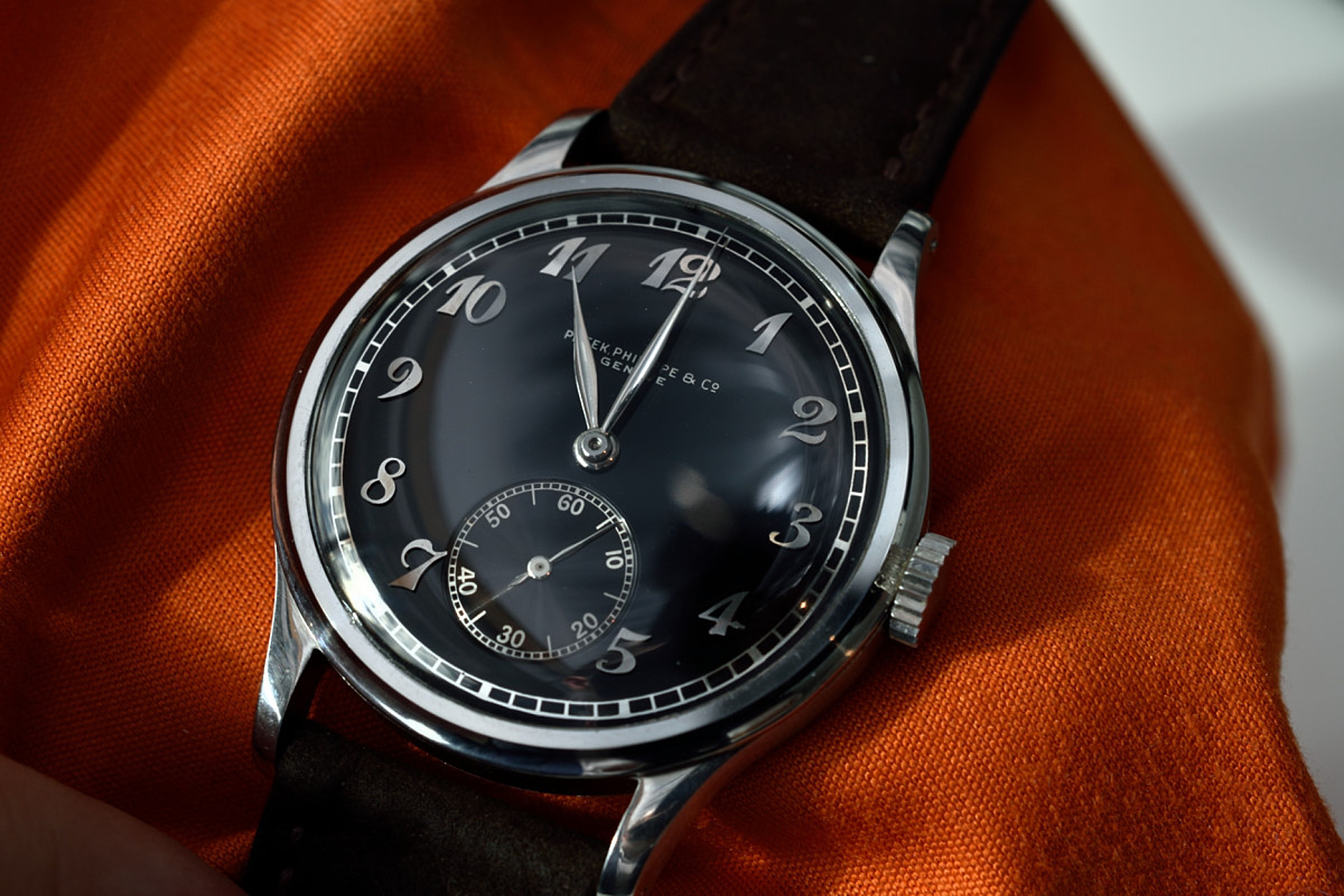 The OAK Collection, owned by Patrick Getreide, is part of the over 600 ‘One of A Kind’ vintage and contemporary museum-quality watches that include special orders, ultra-rare limited editions, the most valuable examples of particular models and the largest privately held ensemble of Patek Philippe pieces once owned by celebrated collector Henry Graves Jr. On 19 May, 162 fantastic examples embark on a four-stop exhibition world tour from the London Design Museum (19-25 May).  Seven out of the eleven exhibition chapters are dedicated to Patek Philippe pieces, which we introduce here.

The OAK Collection consists of a magnificent selection of pure Calatrava pieces as well as technically or aesthetically more complex examples. We introduced the OAK Collection and the Rolex & independent chapters here, this article provides an overview of the Patek Philippe chapters.

In fine watchmaking design and outstanding execution are just as important as the mechanical features. A good number of brands from Vacheron Constantin to Jaeger-LeCoultre accentuate their artisans’ work on the timepieces.

Patek Philippe is also very well known for their exquisite decorative creations. Hand-engraving, cloisonné enamel, miniature painting on enamel, flinqué enamel on guilloched backgrounds, paillonné enamel or wood micro-marquetry are all among the special skills of the manufacture. (Earlier this year Patek Philippe dedicated an exhibition to the topic in the Geneva boutique and it is on view in Paris until 22 May).

Patrick Getreide truly appreciates these pieces. His collection includes, for example, a Patek Philippe Ref. 2482 with a tropical landscape depicted in cloisonné enamel on the dial or a Ref. 2481 with a ‘Lighthouse’ in cloisonné enamel. The latter is one of only six known.

Patek Philippe created iconic pocket watches and dome table clocks. One of the many highlights is a gold and enamel pocket watch (the Patek Philippe Ref. 982/140G) with a beautiful geisha decoration on the reverse. 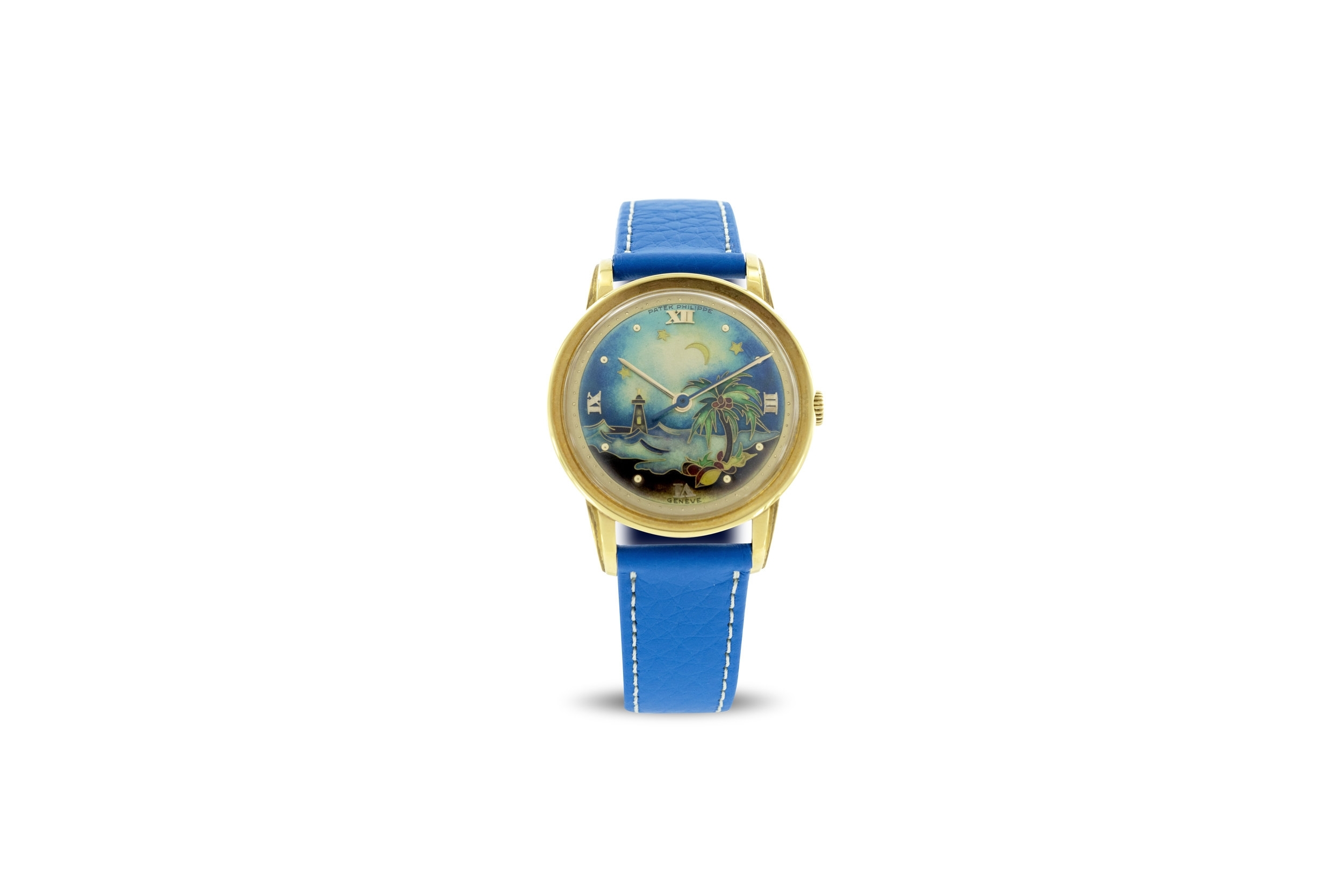 During ‘champlevé’, the moist powder enamel is applied to the engraved patterned metal surface, thus the enamel seeps into the patterns, and it is then fired. During the creation of the base metal pattern, extremely high quality requirements have to be met, because even the smallest unevenness can prevent the appropriate binding of the enamel. When the surface has cooled, it is polished with very fine sandpaper. The uncarved portions of the original surface remain visible as a frame for the colourful enamel designs.

The ‘cloisonné’ technique is similar, but in this case there are small strips added on top of the metal to create the enamel compartments. These strips are extremely fine (around 0.07mm) and they are bent and applied by hand to the dial, creating individual cells. Colours are then picked out for each cell in order to create the cloister effect. Multiple layers of enamel are applied to the cloisonné dial for more depth. 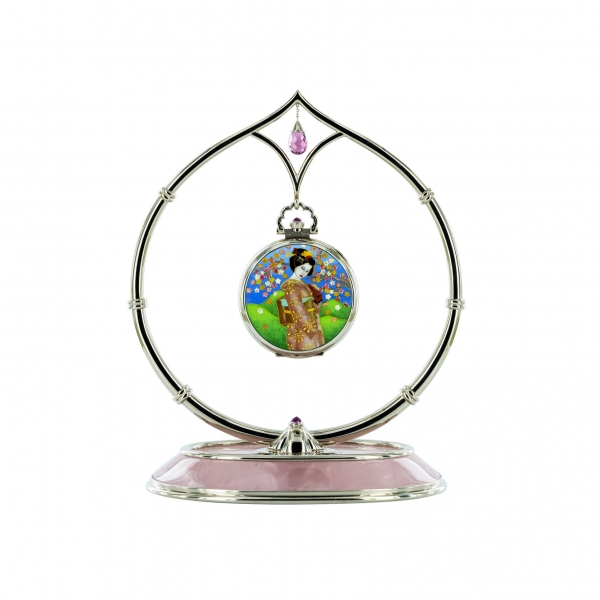 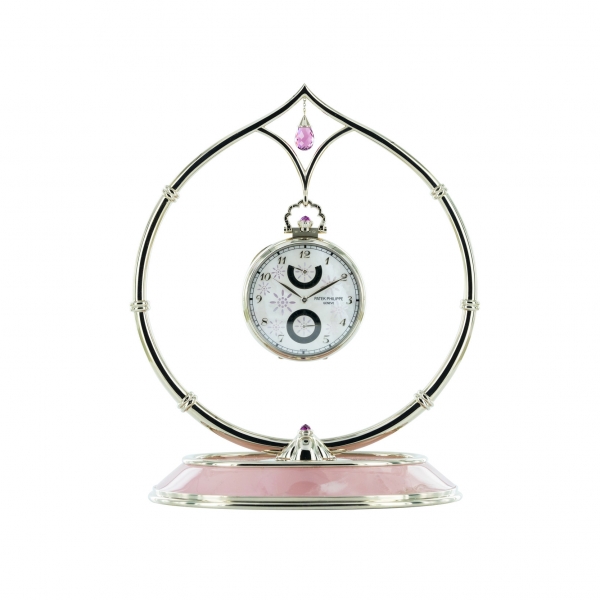 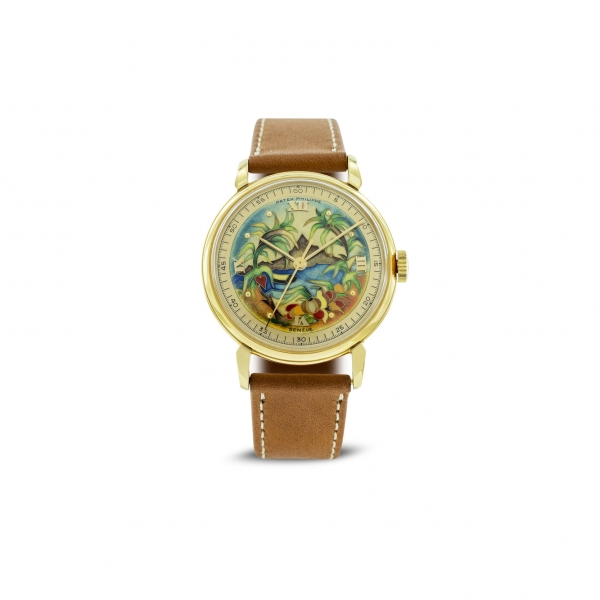 ‘Calatrava is recognised as the very essence of the round wristwatch and one of the finest symbols of the Patek Philippe style.’ – the manufacture defines the product line.

The first Calatrava (the Ref. 96) was created in 1932 – in the year when Jean and Charles Henri Stern purchased a controlling interest in the company and decided to have a watch which remained absolutely true to Patek’s tradition but would be popular for a wider audience. The timepiece was named Calatrava, referencing the symbol of the 12th century Calatrava Knights of Spain and Portugal.

The design came from English horologist David Penney and followed the basic principles of Bauhaus design. Bauhaus-style was created as a result of the influential early 20th century design and architecture movement named after the German school founded by architect Walter Gropius. The rational, functional design aesthetic is at the forefront of Bauhaus. With its purity, the Patek Philippe Reference 96 adheres to the philosophy of ‘form following function’ while promoting the importance of great proportions. As Aurel Bacs (Senior Consultant for Phillips, in association with the consulting firm Bacs & Russo) describes ‘the Calatrava is a Greek temple and the Acropolis, it is perfect’.

In 1973, Patek Philippe unveiled a little more ‘decorated’ Calatrava, the now emblematic Ref. 3520, featuring a bezel with Clous de Paris guilloche (or hobnail decoration) combined with straight and polished lugs. (You can find this element also on some Calatrava novelties this year).

Mr Getreide has an amazing Calatrava collection. Twenty Calatravas are on display in the exhibition, including what the collector calls the ‘Fantastic Four’. The unique 36.5mm Reference 530A in steel with a black gloss dial (cca from 1941), Breguet numerals and gold Feuille hands; the only known Reference 570J, a gold-cased Calatrava with indirect centre seconds; the Reference 570R in pink gold with a matching, two-tone rose dial and indirect centre seconds and the unique Reference 1504 in steel with a black dial and pink gold indexes. 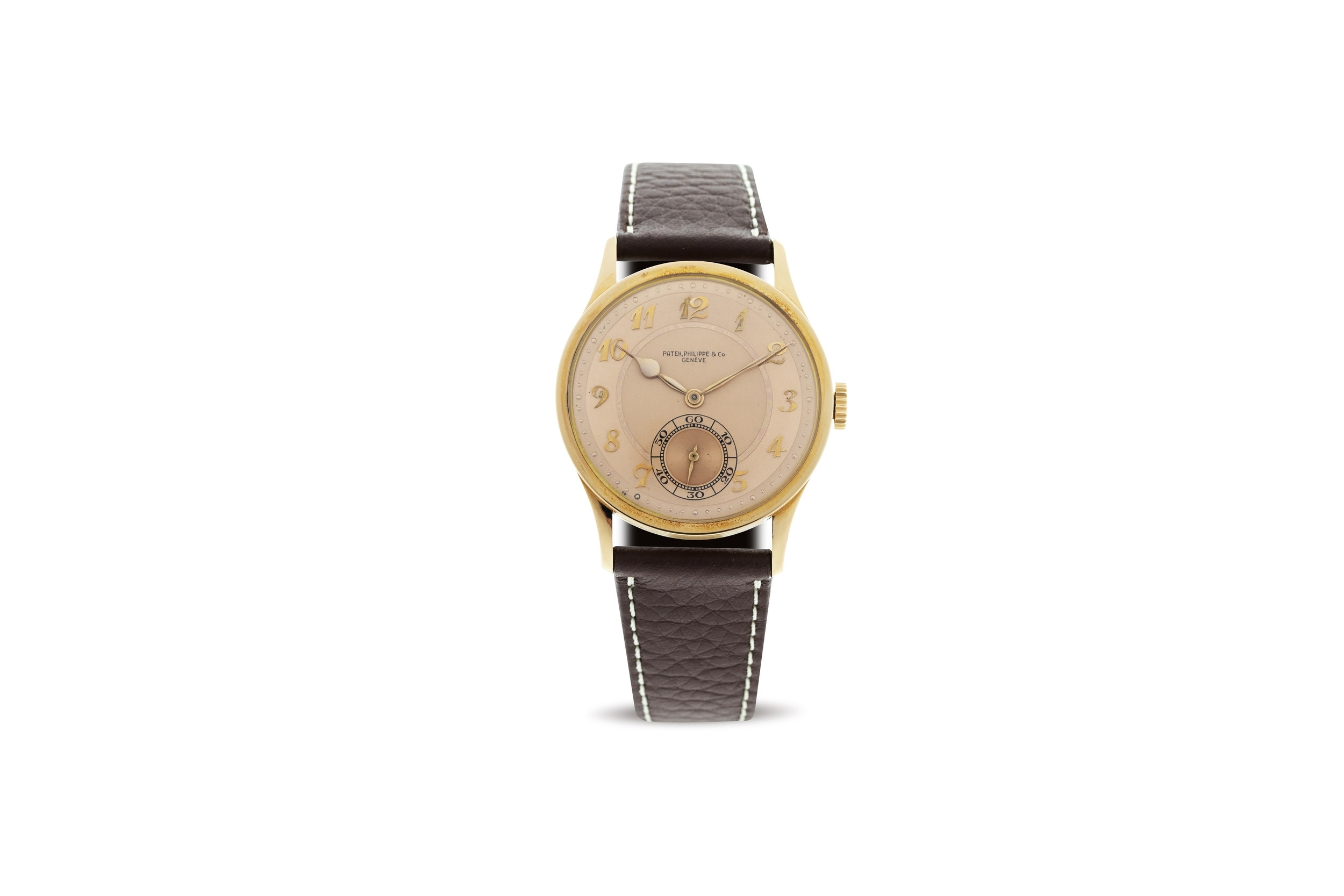 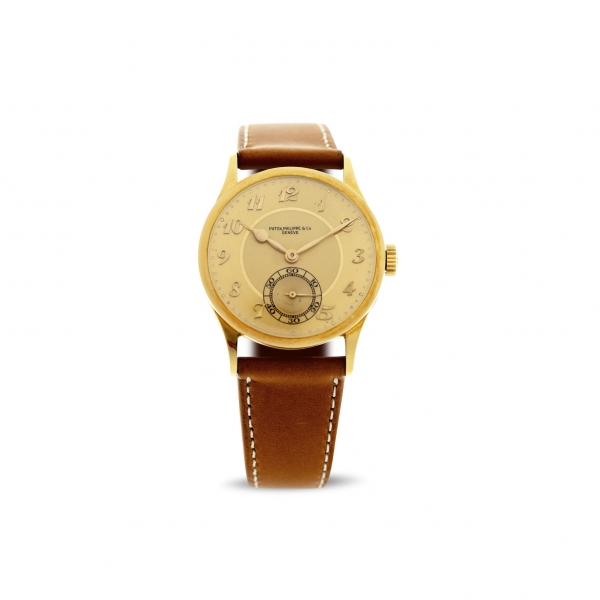 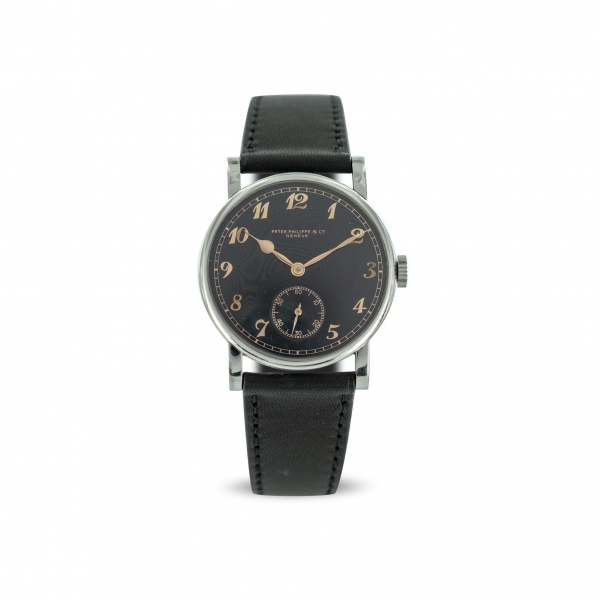 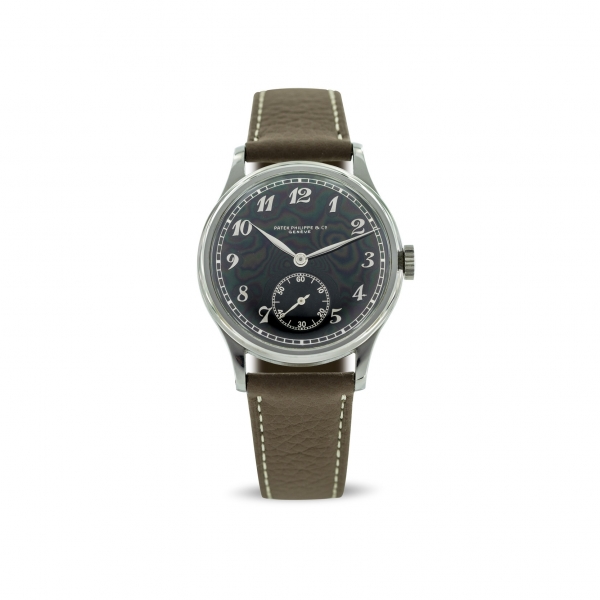 The Nautilus is another product that rose to iconic status in the fine watchmaking world.

The early and mid-70s brought along many ‘watch heroes’. In 1972, Audemars Piguet shocked the industry with the series designed by Swiss watch designer Gerald Genta and named after the ship of the British Royal Navy, the Royal Oak. In 1975, Vacheron Constantin briefly introduced the Royal Chronometer Automatic 2215 stainless steel. In 1976, Patek Philippe presented its first ever ‘luxury sports watch’, the Nautilus Ref. 3700, a stainless steel watch, with an integrated bracelet, a large case (42mm which received the ‘Jumbo’ nickname back then), also designed by Gerald Genta. As the story goes, he sketched the first version during his dinner in a hotel restaurant and brought it to the executives of Patek Philippe, who also happened to be in the same dining hall.

The ‘Nautilus’ name comes from the submarine featured in Jules Verne’s classic novel 20,000 Leagues Under the Sea, as the oval shape reflects the portholes on Captain Nemo’s submarine.

Throughout the decades, it has become one of the brand’s most sought-after watches, with crazy waiting lists for the new Nautilus editions and equally wild prices on secondary markets.

But Patrick Getreide was ahead of the game – he realised the significance of the Nautilus long ago, and now the exhibition includes 16 examples, such as the three early Reference 3700 models in different formats, like the 3700/1A in steel or the 3700/004, the Gobbi Milano in yellow gold with small diamonds around the outer parameter of the bezel and the only known Nautilus to have been fitted with a quartz movement on ‘special request’ (the Patek Philippe Nautilus Ref 3800/123A from 1984) and a selection of more recent models featuring chronograph and calendar complications. 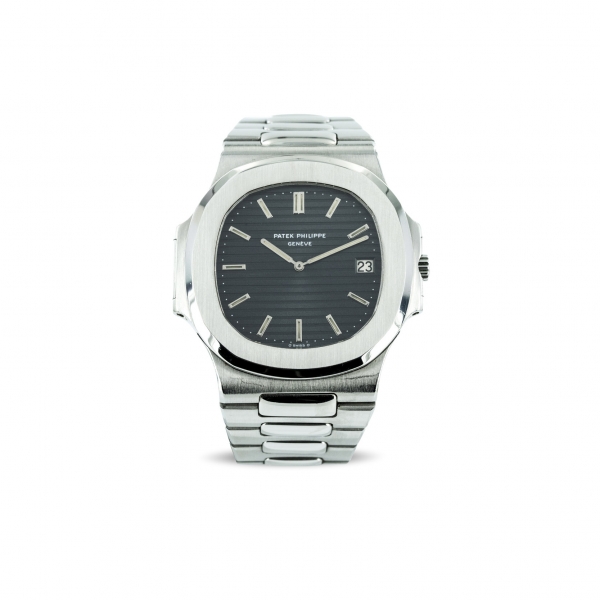 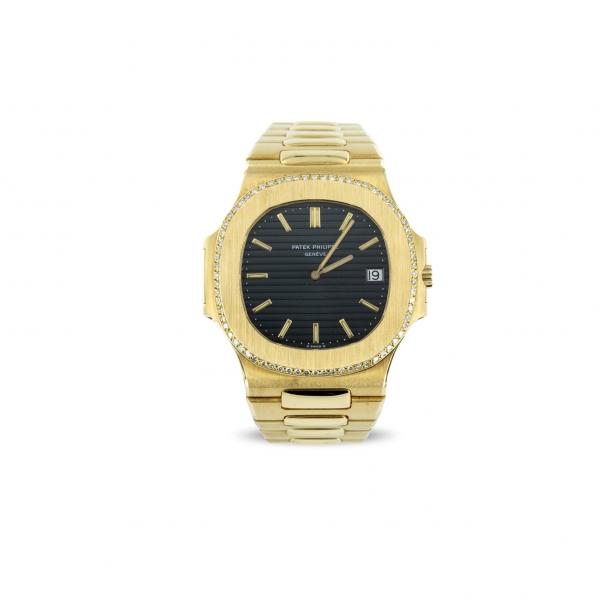 While the main attribute in the two above mentioned sections was the design, this section elevates the technical content to the spotlight. Timepieces in this chapter line up Patek Philippe’s finest perpetual calendar and high complication references.

The famous Ref. 1518 is Patek Philippe’s (and the world’s) first perpetual calendar chronograph wristwatch produced in a series. Only 281 were created over the course of a little over a decade (between 1941 and 1954), encased in various metals: yellow gold, pink gold and steel. The 1518 established the new class of perpetual chronographs and paved the road for later References, such as the 2499, 3970, 5970 and the 5270 introduced in 2011. 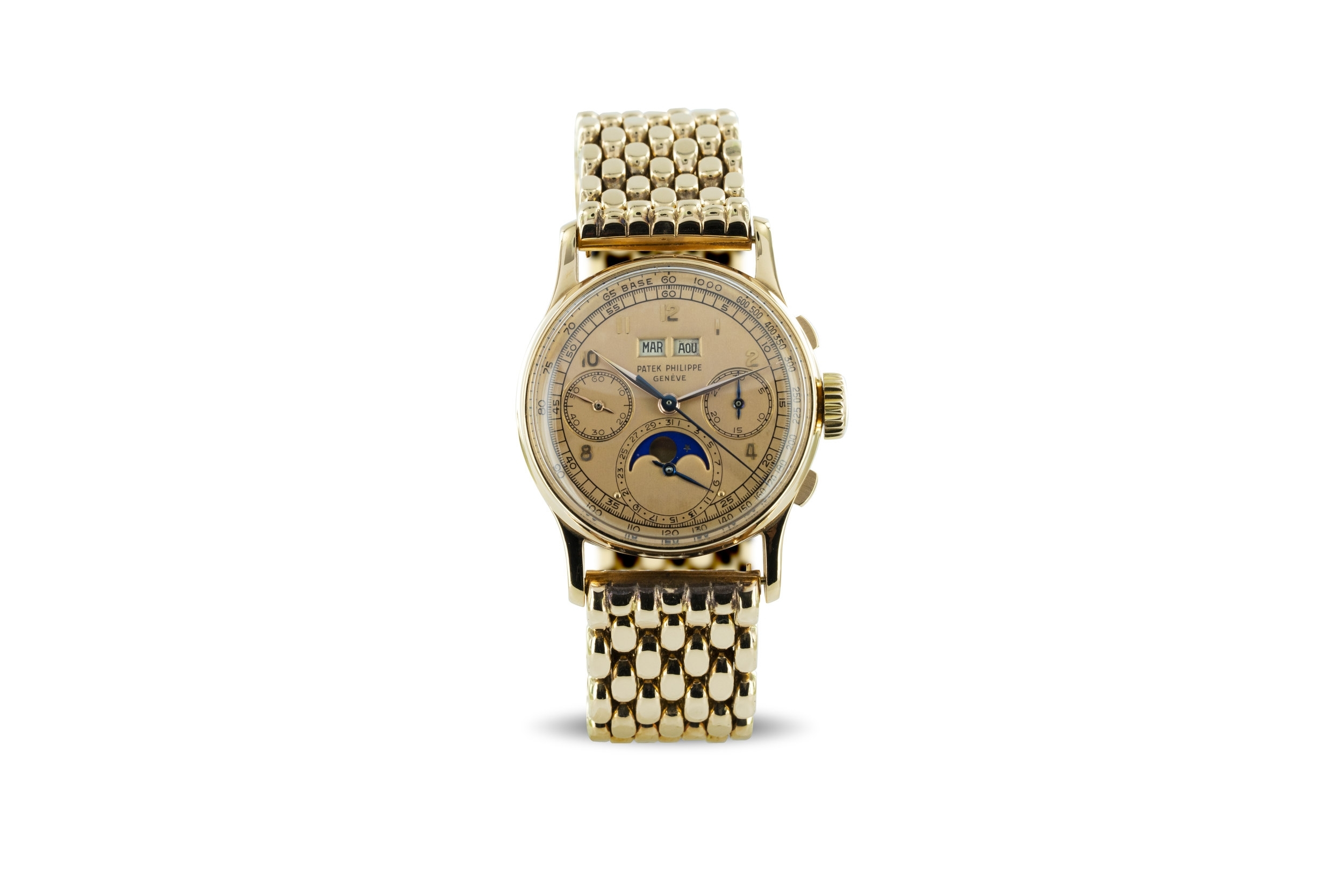 The Ref. 1579A steel chronograph is one of only 6 made with a tachometer scale, from circa 1950. Patek introduced this reference in 1943 with unusual, faceted lugs, a thick bezel and large opening to the dial. The dial is also preserved in an excellent condition and is fitted with applied Arabic numerals (12, 6) and square-faceted hour markers and an outer tachymeter scale.

This part of the collection also contains modern watches. The Reference 3970/2J was made in 2019 for a special commission (with a yellow gold case, matching bracelet and champagne dial) and very unique vintage ones. 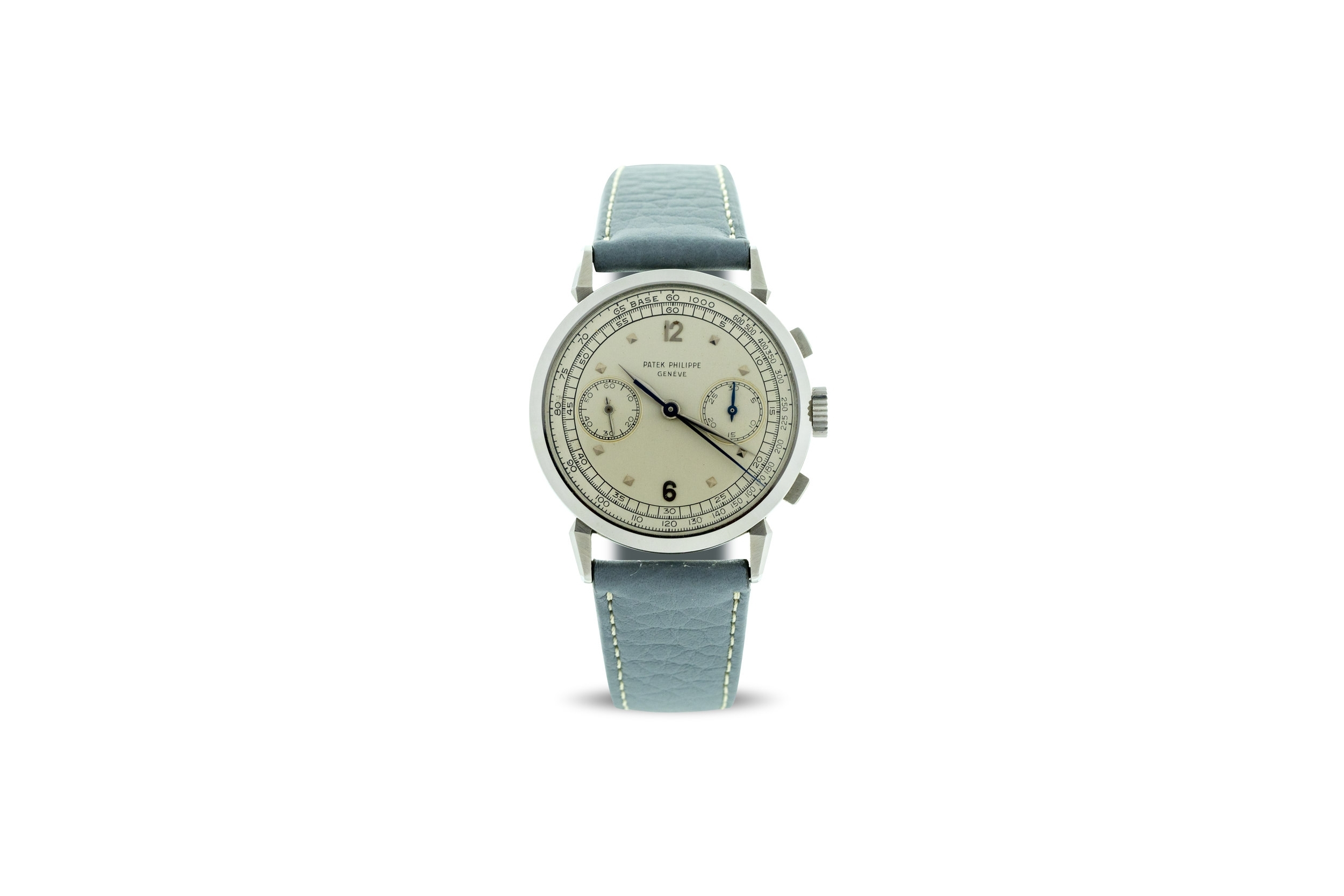 Henry Graves Jr. (1868–1953) was an American banker and – among other things – he is remembered for his superb Patek Philippe collection. Mr Graves began acquiring Patek Philippe timepieces in the 1910s, ultimately becoming one of the firm’s most notable patrons. He also owned the so-called ‘Patek Philippe Henry Graves Supercomplication’, designed and built by Patek Philippe as an ultra-complicated (24 functions) pocket watch for his orders. His grandson Reginald H. Fullerton was the heir to the Graves watch collection and also a distinguished collector himself.

One of the many unique elements of the OAK Collection exhibition is that it brings together watches owned by both men – five that belonged to Graves and two owned by Fullerton.

An eminent example is the ‘observatory quality’ platinum-cased tourbillon pocket watch that was created by Patek Philippe to take part in the Geneva Astronomical Observatory Timing Contest of 1933. The watch won outright, making it one of the world’s most accurate mechanical watches. The pocket watch has its own original case and ‘bulletin d’observatoire’ timekeeping certificate too. The timepiece is engraved with Graves’ family crest and their celebrated motto ‘Esse Quam Videri’ – to be, rather than to seem. The origin of ‘Esse quam videri’ is traced to a sentence in the essay ‘On Friendship’ (‘De amicitia’) by Roman statesman, lawyer, scholar and writer Marcus Tullius Cicero (106 BC- 43BC). Throughout the centuries it has been used as a motto by a number of different groups, including Graves’ family. 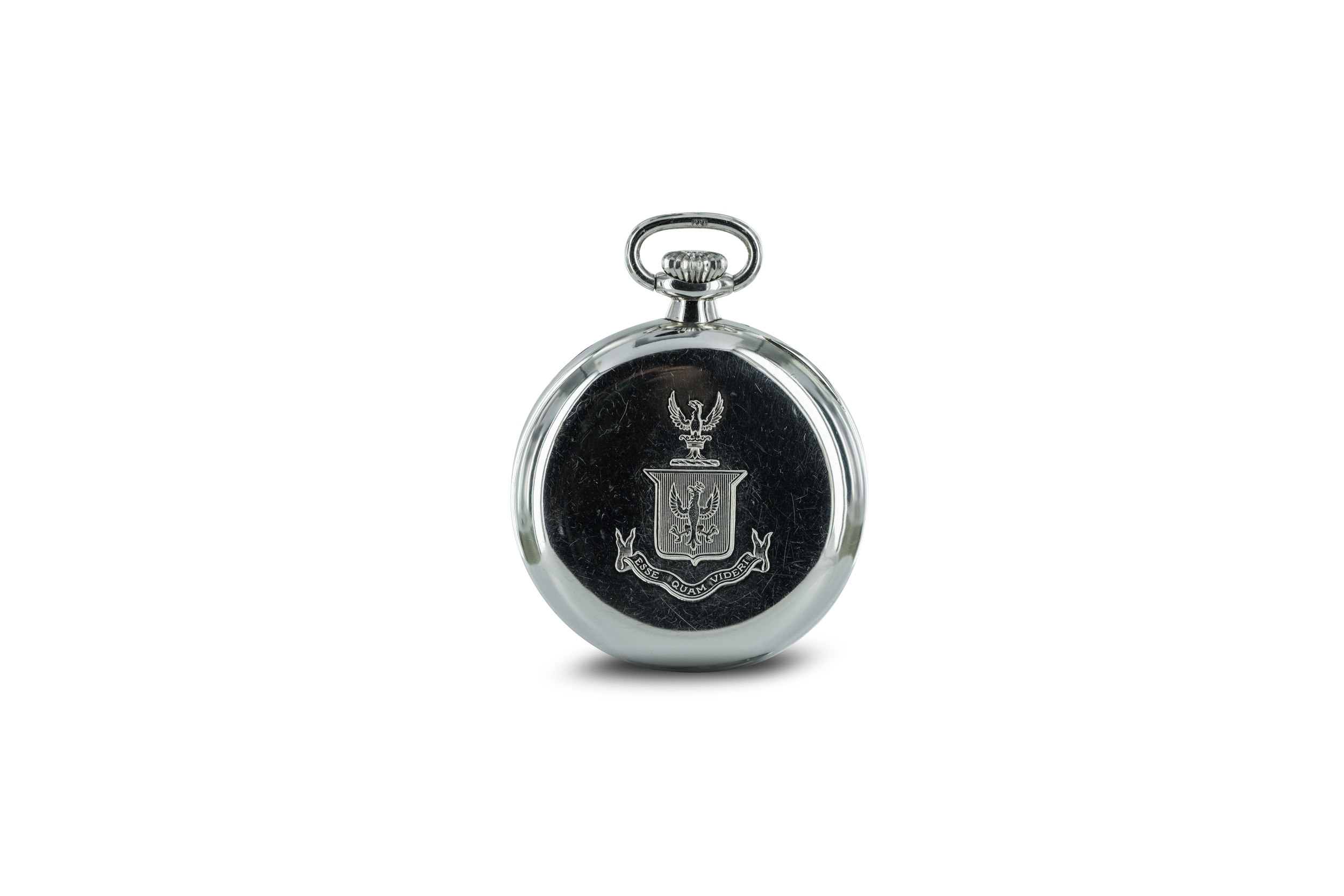 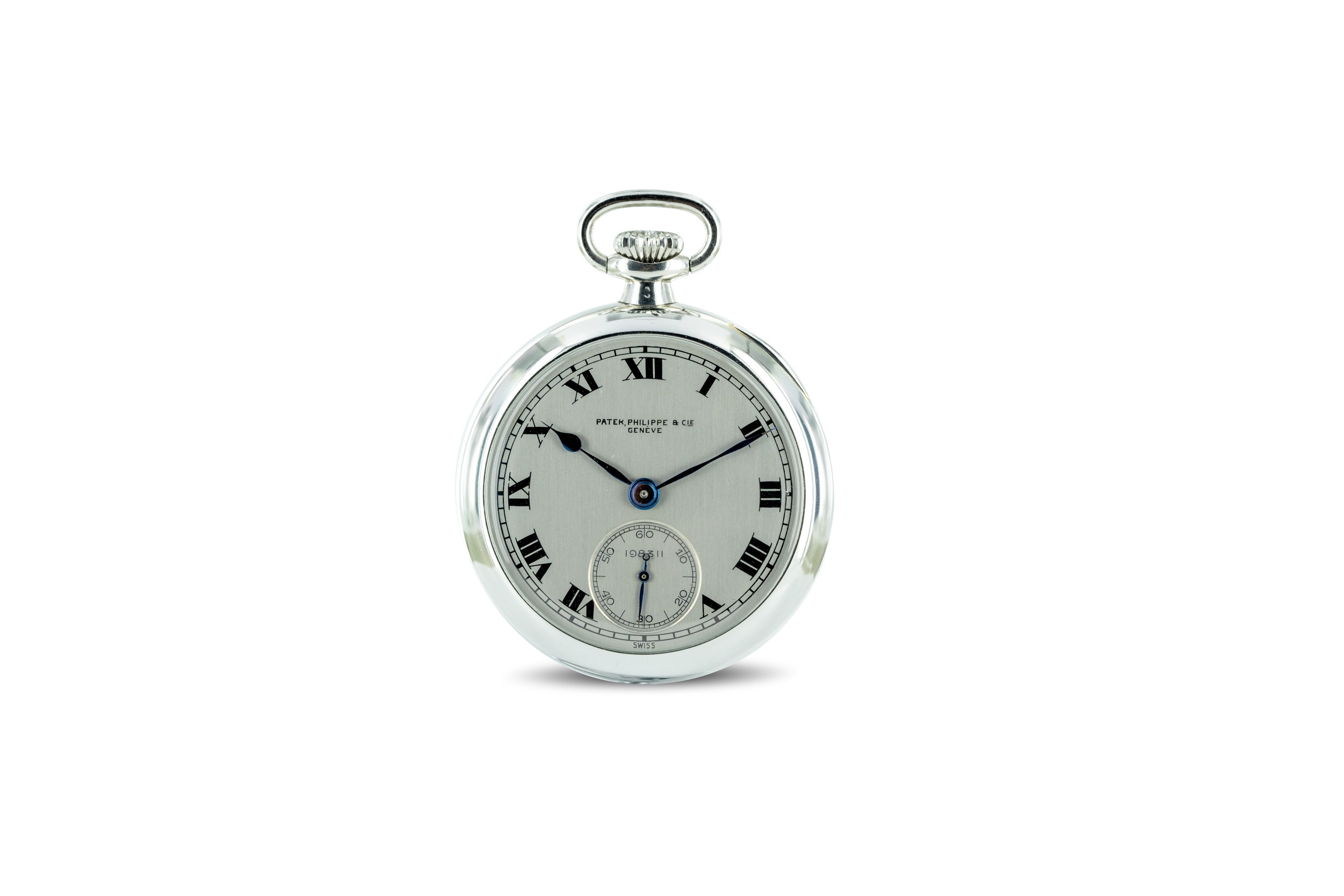 In 1931 a Swiss watchmaker, Louis Cottier, created a whole new movement showing the times of the 24 time zones with a rotating bezel on which the names of the cities of the different time zones were inscribed.

Patek Philippe introduced the Ref. 1415 world time wristwatch based on the mechanism of Louis Cottier in 1939. It was a single crown model with cities engraved on the bezel which could be adjusted manually. The model was in production until the mid-50s and then in 1953, the present Ref. 2523 was issued, which had the city disk control on the second crown at 9 o’clock. Not many were produced due to the moderate sales figures. The world timers were in production only until the end of 1960s.

There are ‘Heures Universelles’ models featured in the exhibition. The Ref. 2523J two-crown World Time is one of the just four known examples to feature a dial centre enamelled in polychrome blue – the collector’s favourite colour. An other World Time is an 1963 example of the beautiful Reference 2523 – in yellow gold, also with the double crown. 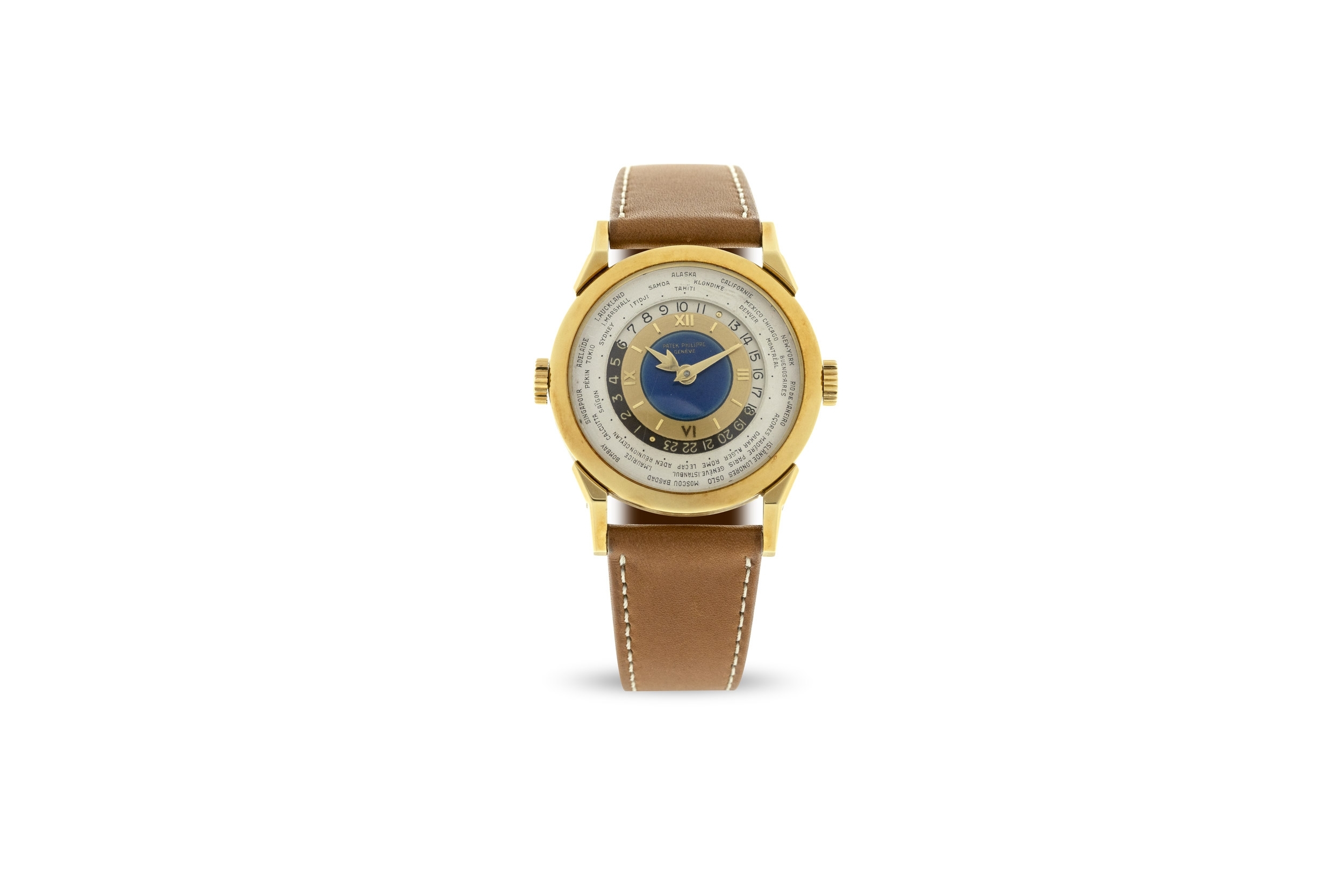 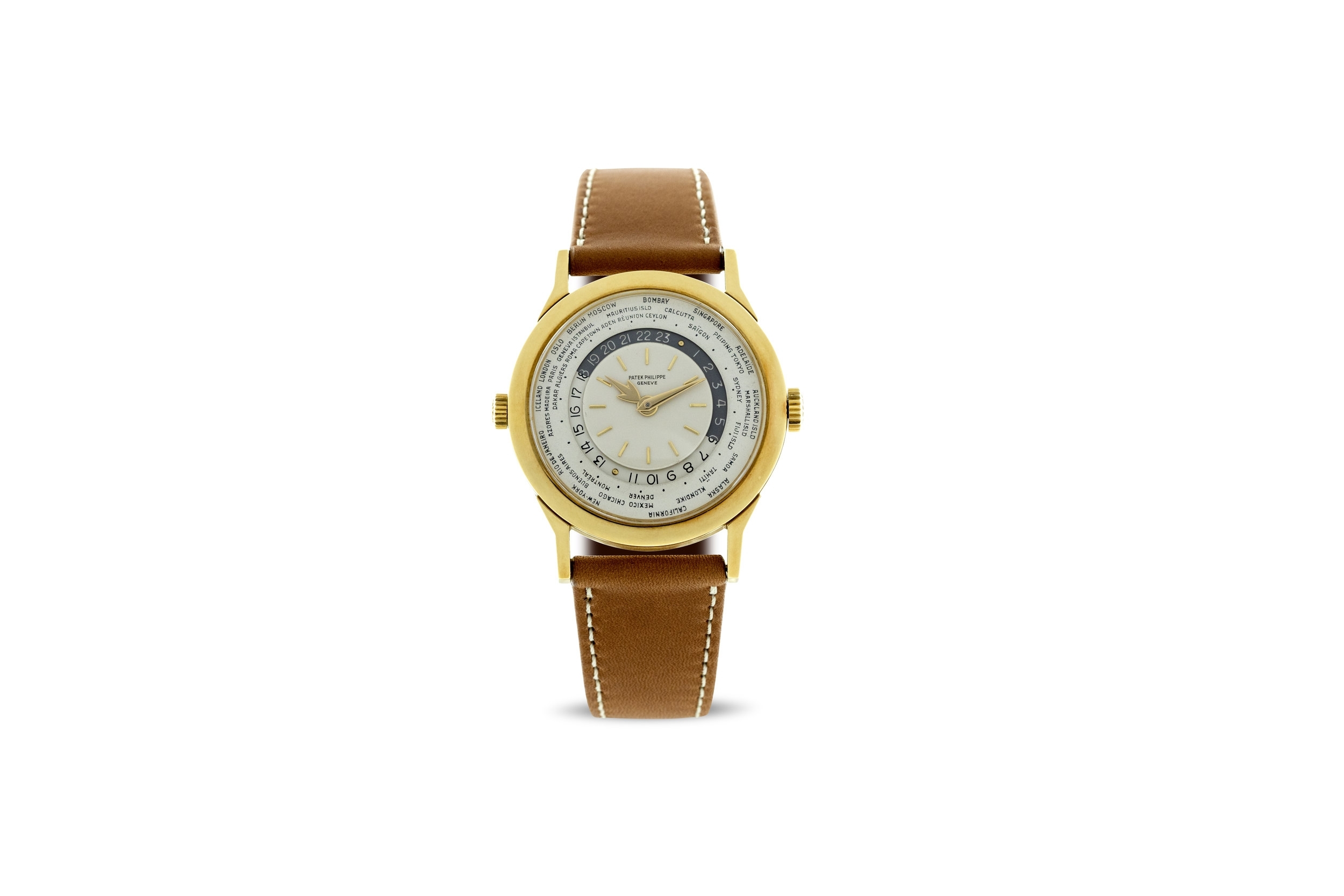 Photo credits: The OAK Collection. Loupiosity.com
All registered trademarks are property of their respective owners.
All rights reserved.

The OAK Collection exhibition On 19 May, 162 vintage and contemporary museum-quality watches of the OAK Collection embark on a four-stop exhibition world tour from the London Design Museum (19-25 May). We sum up the 11 exhibition chapters and give you updates as we participate in the pre-opening ceremony on 18 May.The OAK Collection - Rolex & Independent Chapters 4 out of the 11 chapters of the OAK Collection exhibition are dedicated to pieces of Rolex and independent brands. The vintage and contemporary museum-quality watches include special orders, ultra-rare limited editions and the most valuable examples of particular models. The four-stop exhibition world tour starts in the London Design Museum (19-25 May).Dubai Watch Week 2021 In the very long months of the pandemic - as any other sector - the luxury industry and the watch brands have been coping with virtual presentations and online product launches. Of course everyone is keen to return to the live events, real personal discussions and not-on-the-Zoom connections. The Dubai Watch Week welcomed a great number of visitors in the sunny…