Reuge at the Geneva Watch Days 2021 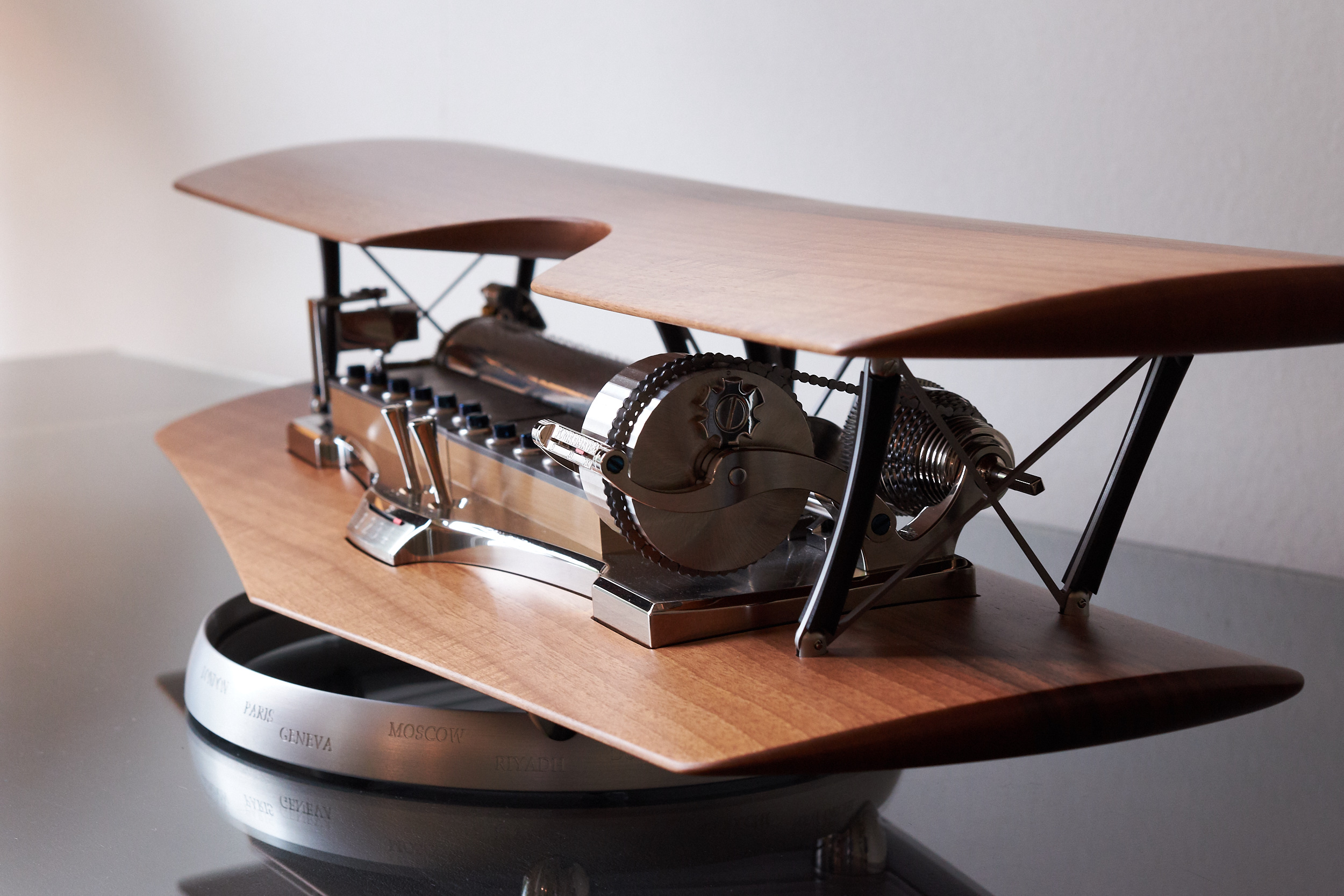 We visited the most musical suite of the Beau Rivage Hotel during the Geneva Watch Days 2021. Reuge filled the historic space with melodies played by stylish mechanical automations.

It was not the first time that I heard the tinkling sounds of music filtering out from the suites of the Beau Rivage. However, on this occasion I had to find its source and see it for myself. In Suite 123, tiny pins on rotating cylinders were plucking carefully tuned musical steel and brass combs in astonishing mechanical devices.

In historic times before the myriad of orientation points, such as wrist watches, always connected mobile phones and tweets giving updates of thoughts and happenings instantly, sounds had more importance. Clock towers signalled the passing of time to the inhabitants of villages even when working further out on the fields and clocks did the same in a single household. Clocks appeared in all kinds of forms, qualities, decorations and materials. First the privilege of a few, they became available to even lower social circles. In the Schwyz, Appenzell Ausserrhoden, Schwartzwald regions and around Davos, wooden wheel clocks many times with chiming mechanisms lived their heydays in the 17th-18th centuries. A local from Wienacht, Appenzell Ausserrhoden, Konrad Kellenberger collected many of these during his ‘Uhrenreisen’ between 1928 and 1976. He restored them in working condition and left his collection to the city of Winterthur – I highly recommend that you pay a visit to this museum!

Even before, curious minds have experimented with playing entire melodies to signal time or for joy played on-demand. The earliest known mechanical musical instrument (a hydro-powered organ playing interchangeable cylinders automatically) was made by the three Banū Mūsā brothers in the 9th century, in Baghdad. In the 12th century, Ismail al-Jazari created a musical robot band floating in a boat. It had a programmable drum machine with pegs (cams) that bump into little levers that operated the percussion. Moving around the pegs could result in different drum patterns. In 1598, Flemish Nicholas Vallin created a wall-clock playing on bells by a pinned barrel. Pins could be placed in different holes on the barrel, aka programmed to play a different melody. In London, Ahasuerus Fromanteel (1603-1693) and James Cox (1723–1800) also created musical clocks before the business of creating musical boxes started to flourish in Switzerland and the German Schwarzwald region. Pierre Jacquet-Droz and Jean-Frédéric Leschot invented the singing bird mechanism in La Chaux-de-Fonds in the 1780s in which the song was produced by a miniature pipe-organ requiring a separate pipe for each note. In 1796 Genovese Antoine Favre-Salomon introduced the metallic notes on comb replacing the bells. It was also the time when the Nord-Juran village of Sainte-Croix the music-box industry started to become the Acropolis of the musical-box industry, which at its heights was accounted for 10 % of Switzerland’s export.

Charles Reuge settled in Sainte-Croix in 1811 and created musical pocket watches with the combination of musical cylinders and comb. His son, Albert grew the business further and introduced the musical mechanisms in other objects of use, such as cigarette lighters. Under Guido Reuge, the 3rd generation of the entrepreneur family, the factory developed via acquisitions and diversification – in response to the 1929 crisis, he split the business between the luxury musical objects and small movements primarily fitted into bottom-range toys. He also took over the manufacturing and marketing of singing birds by acquiring Bontems in France (1960), Eschle in Germany (1977, singing birds), Mélodies SA (1985, Thorens disc boxes), Lador (1986, 18-note movements) and Cuendet (1991, cuckoo movements). Not having direct descendants, Guido Reuge sold Reuge SA to a group of Swiss investors in 1988, which was followed by a couple of other takeovers until today. 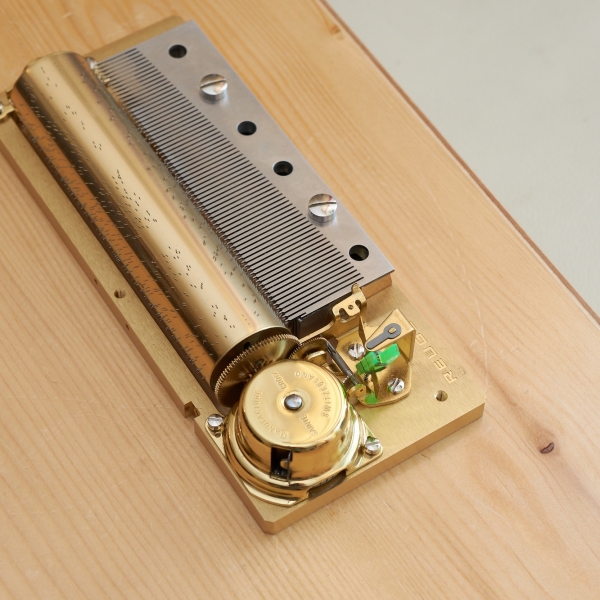 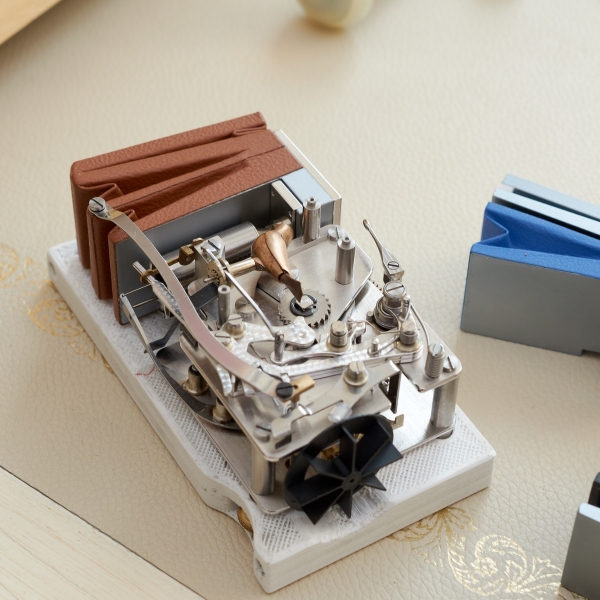 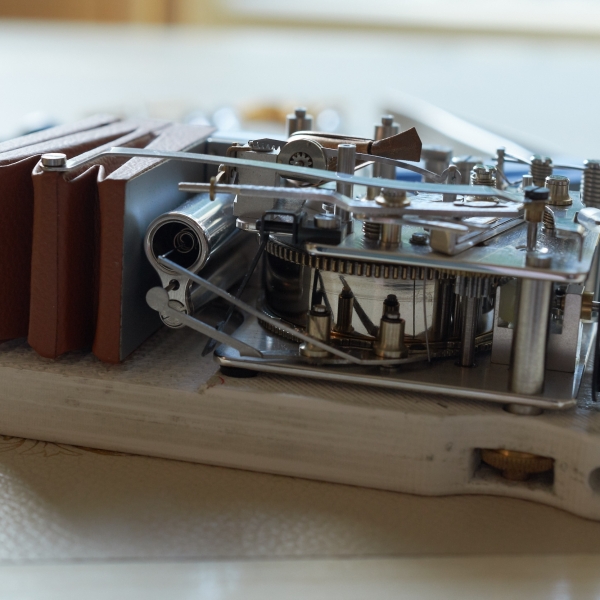 Reuge is probably the only manufacture producing high-end mechanical musical automations today. They are selling their high-end luxury devices and musical components to other businesses too.

Given that musical mechanical objects are an even smaller niche than mechanical watches, they have embarked on looking for new potential buyers. Reuge creates classically designed and daring modern pieces. As a very smart move, in 2012 they accepted Max Büsser’s challenge to create one of MB&F’s first mechanical art object co-creations, the Musicmachine 1. The futuristic design has put the mechanical melody concept in a totally new context. The sold-out 66 pieces were followed by the MM2 and MM3.

Metal and wood appear on many models and the latter can amplify the sound as a resonance box. The wooden casing and structures, let it be a traditional or contemporary model, are created by an Italian company Arte Intarsio, that Reuge had acquired in 2001.

The rich and clean vibrations of the notes are achieved with a series of steps. Each pin is sealed by a special resin from the inside of the cylinder. The comb is hardened under high temperature to have the precise stiffness and flexibility that produces the highest quality sound. The ‘roundness’ of the sound is established by the lead soldering under the bass notes. Dampers are equipped under the teeth to absorb unwanted vibrations. The frequency of each note is checked by a craftsman with sensitive ears before fixing the comb meticulously to the right position where pins are touching the teeth just perfectly.

Pieces displayed at the Geneva Watch Days 2021 included the Enchanting Birds in multiple colours (e.g. the new Green Canary), the ingenious Slightly Windy, which reminded me of the Coco Chanel exhibition celebrating the reopening of the Ritz in 2016, when Gad Weil turned the entire Place Vendôme into a wheat field. 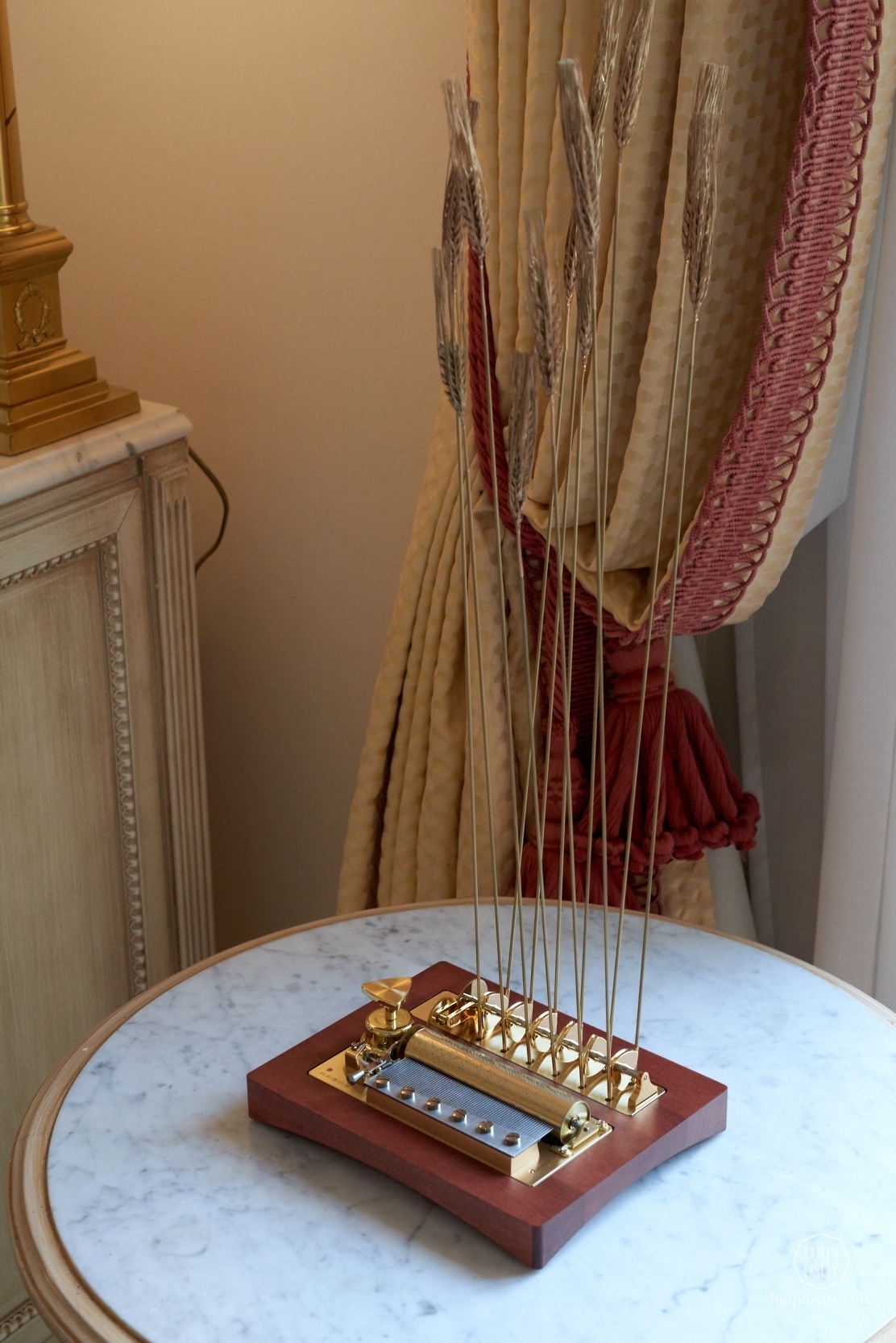 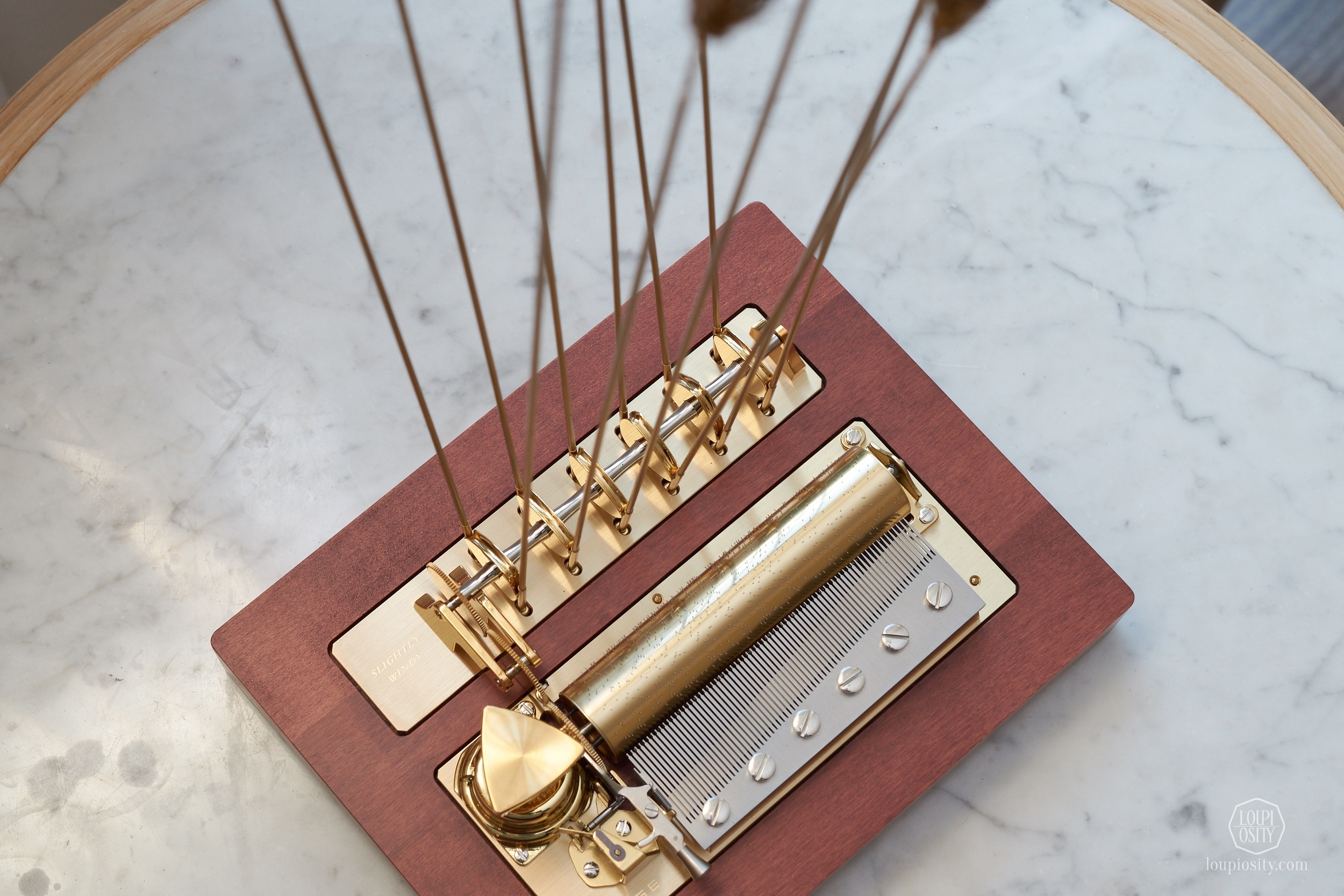 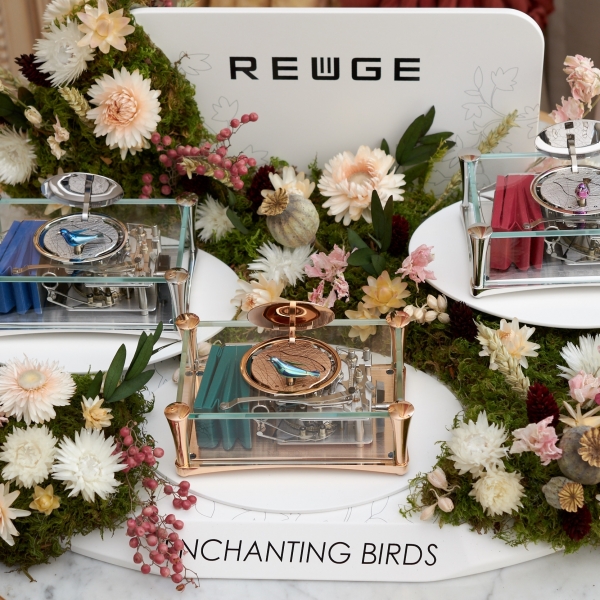 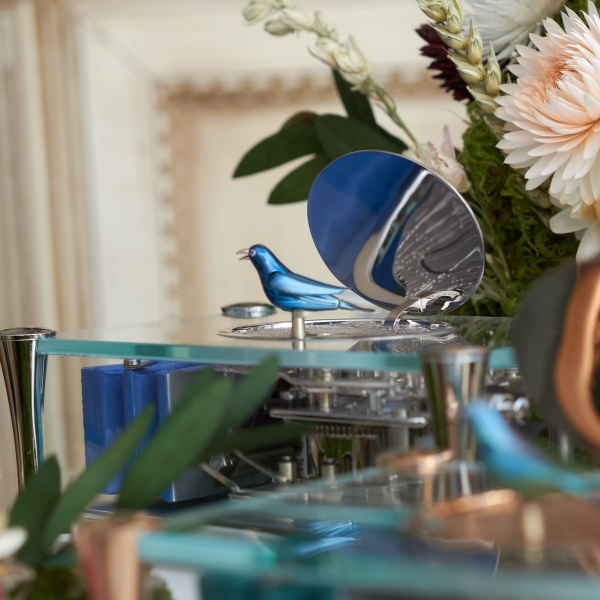 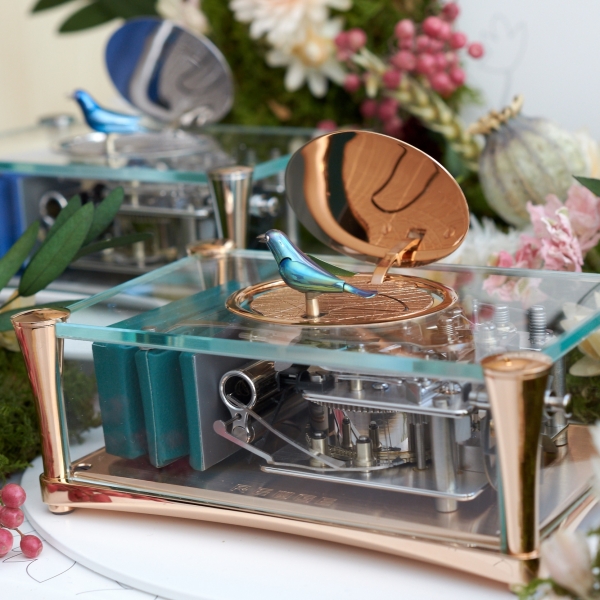 The more traditional Miliarius waves for the ancient Roman chariot races with a mechanical random-generator that breaks the predictability of machines before playing the hymn of victory on 144 notes to the winner. 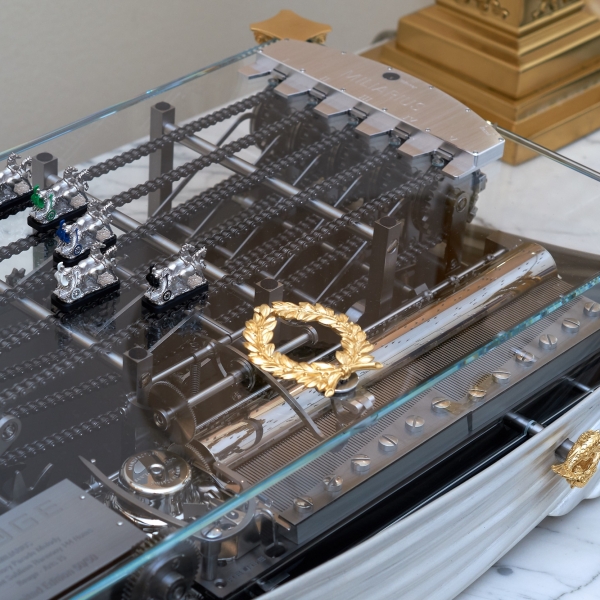 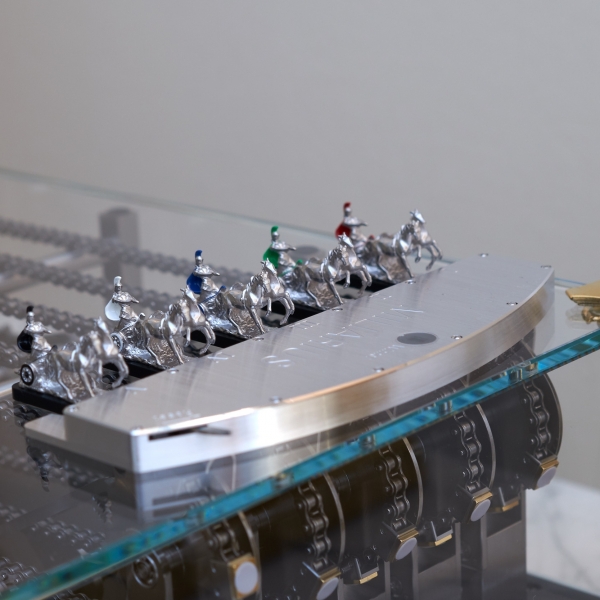 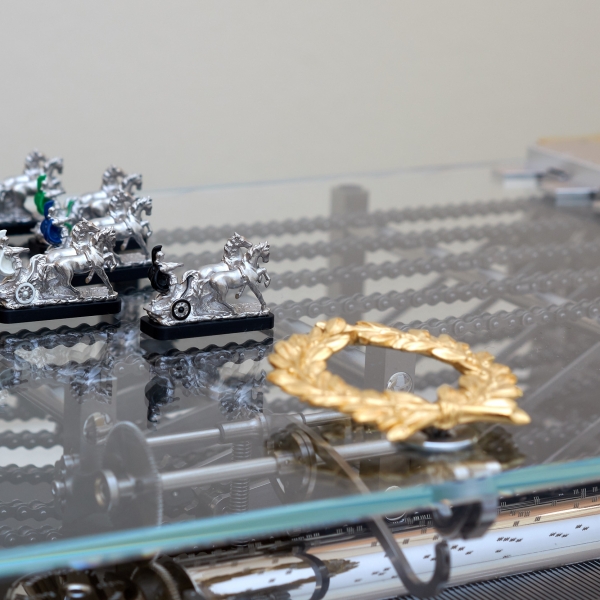 And my personal favourite called the Biplane Wood, was inspired by a very important aviation milestone: the bi-planes, which are fixed-wing aircrafts with two main wings stacked one above the other. The wings of Biplane are crafted from wood, pedestal from aluminium, with a Reuge manufacture movement (Fusee Cartel 4.144). It is tuned to play classics like Aeroplane from Red Hot Chili Peppers, again on 144 notes. The piece was set to play 4 songs by slightly shifting the cylinder on its horizontal axis. 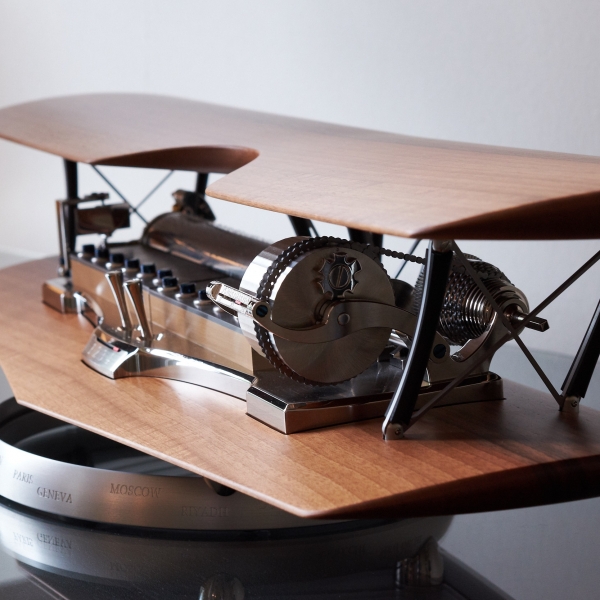 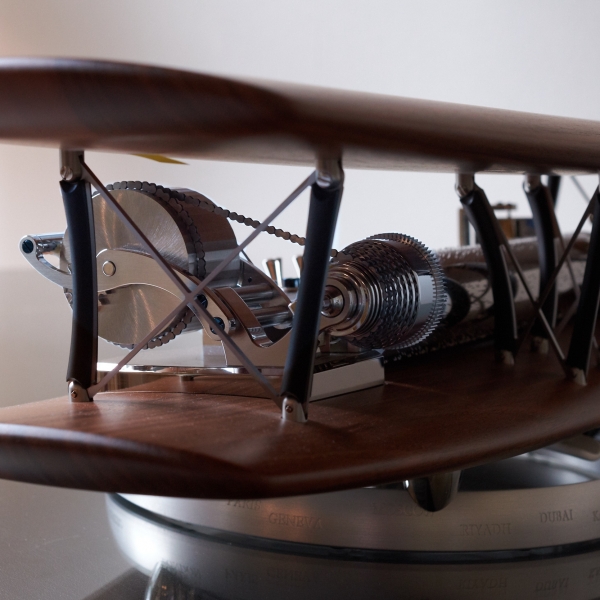 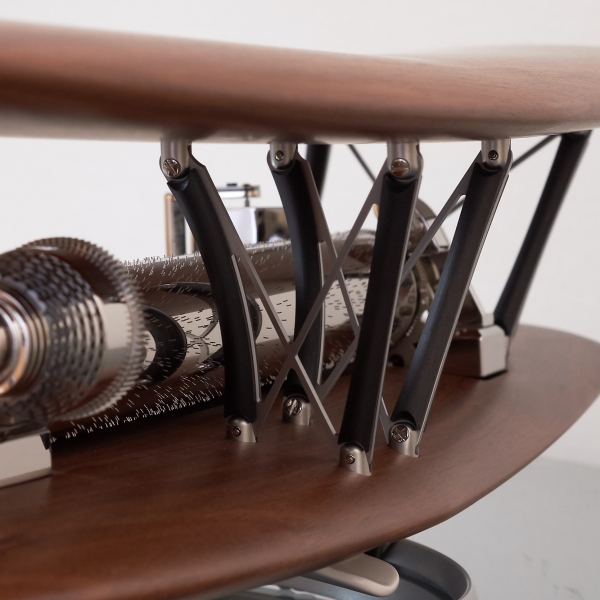 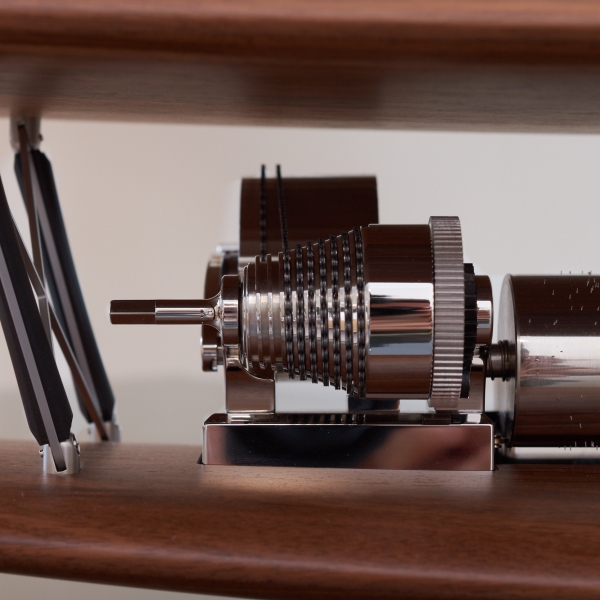 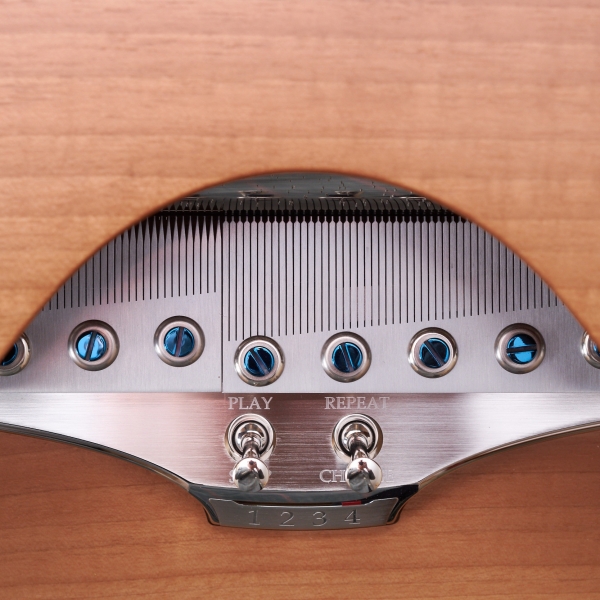 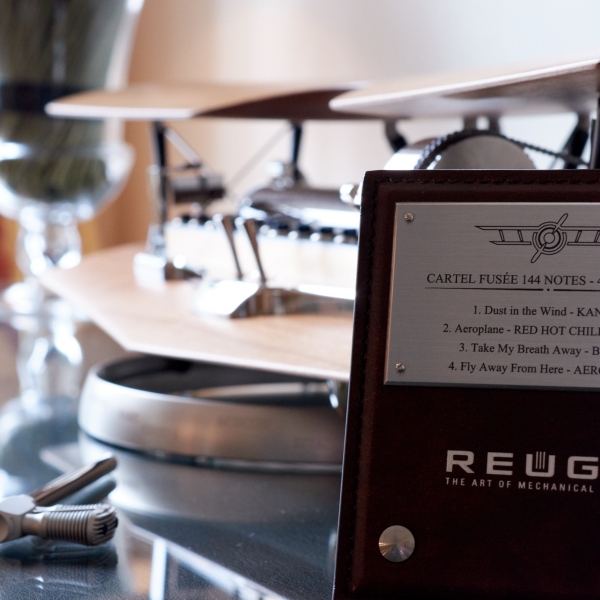