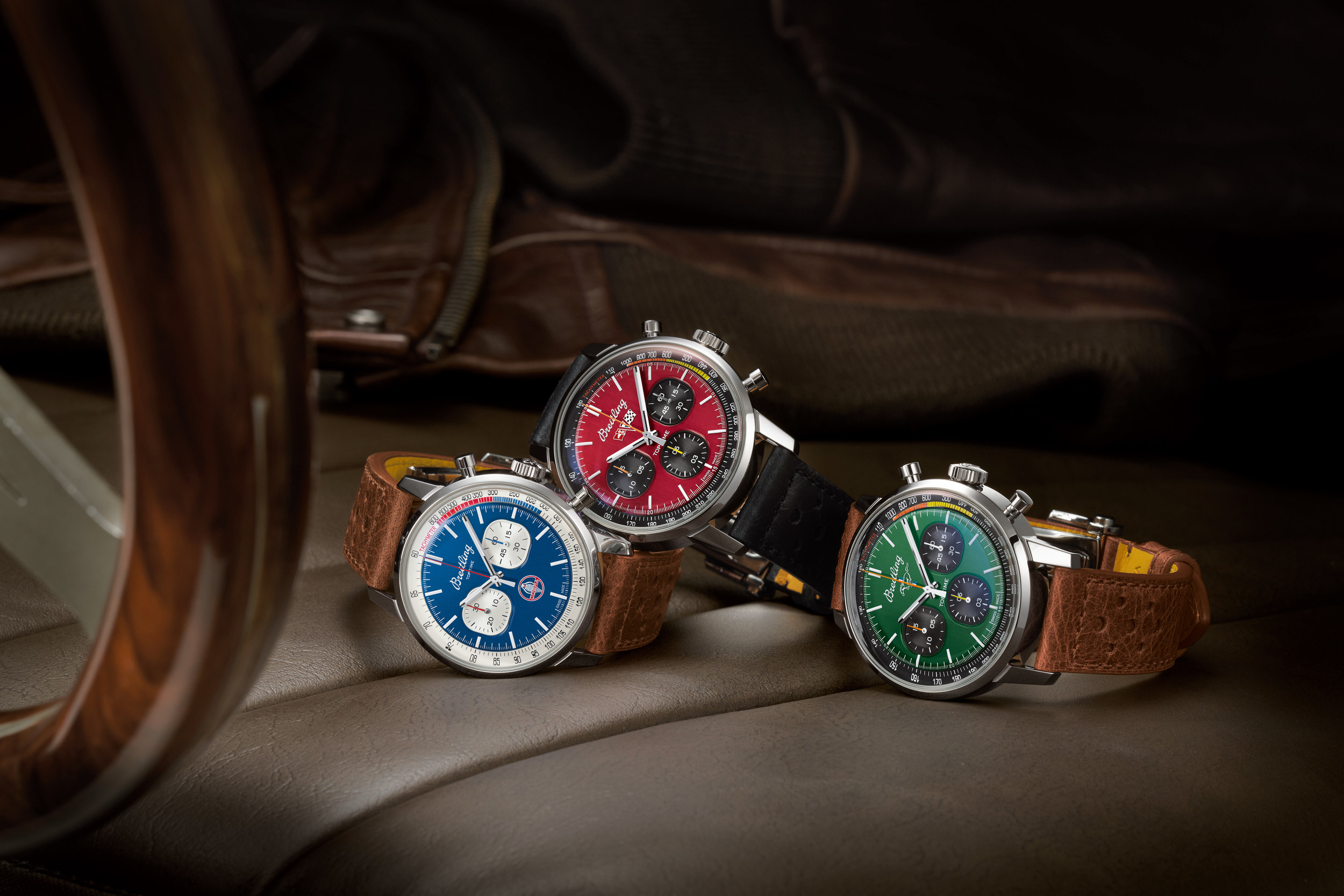 At the 2021 Geneva Watch Days, Breitling stole the show with an extraordinary presentation of their new car-inspired Top Time Classic Cars Capsule Collection. Screeching tires in a smoky hangar lead up the three new chronographs inspired by the racing classics of the ‘60s.

The three-hour booking in our calendar and the request to arrive dead sharp for the bus trip kindly whispered that something funky was going on at Breitling. We arrived at the well-known but unusually deserted building complex of the Palexpo. Instead of the business of the SIHH / Watches of Wonders or the Geneva Motor Show we found ourselves in a smoky, barely lit hangar with a centre building structure that rose above a tunnel and seats at its sides and in front of it. Strip paintings, chevron arrows on the concrete floor and carefully set spaces among the seating areas that resembled lanes left no doubt that not only cogwheels would turn here today. Less than a month ago Breitling and Bentley announced the cancellation of their 19-year partnership. So whatever comes out from the dark tunnel in front of us will be probably something new – and hungry for the massive hangar space.

After an intro by Georges Kern, CEO and shareholder, lights went off and the intensifying sounds of screeching tires elevated the thrill for a while before, smashing out from three corners, a red Chevy Corvette C2 Sting Ray, a green Ford Mustang and a blue white-striped Shelby Cobra appeared. Drivers played around before coming to a standstill, lights on facing the stage. The show continued with a panel discussion with auto journalists and enthusiasts Johann Philip Rathgen, Mai Ikuzawa, Ted Gushue and Breitling’s creative director Sylvain Berneron.

Establishing a new association between these design and lifestyle icons and Breitling’s way of life, the Swiss watch company revealed the 3-model Top Time Classic Cars Capsule Collection at the GWD21.

True to the racing spirit, all three models are chronographs. They evoke the daring designs and the high performance that the four-wheelers still represent today. The steel of the cases shines just like the chrome on the cars and the deep colours of the dials pumps up the blood just as the paint on these classic beauties does: Green (Mustang), Red (Corvette) and Blue (Cobra). The main colours are well complemented with black-white-orange accents and racing-themed black or brown calfskin leather straps. Interestingly, the light on the vintage-style domed sapphire crystals of the green Mustang and red Corvette versions shines in the colours of the rainbow, which is not noticeable on the blue (Cobra). All are double signed with the logos of the cars, which also appear on the case-back. 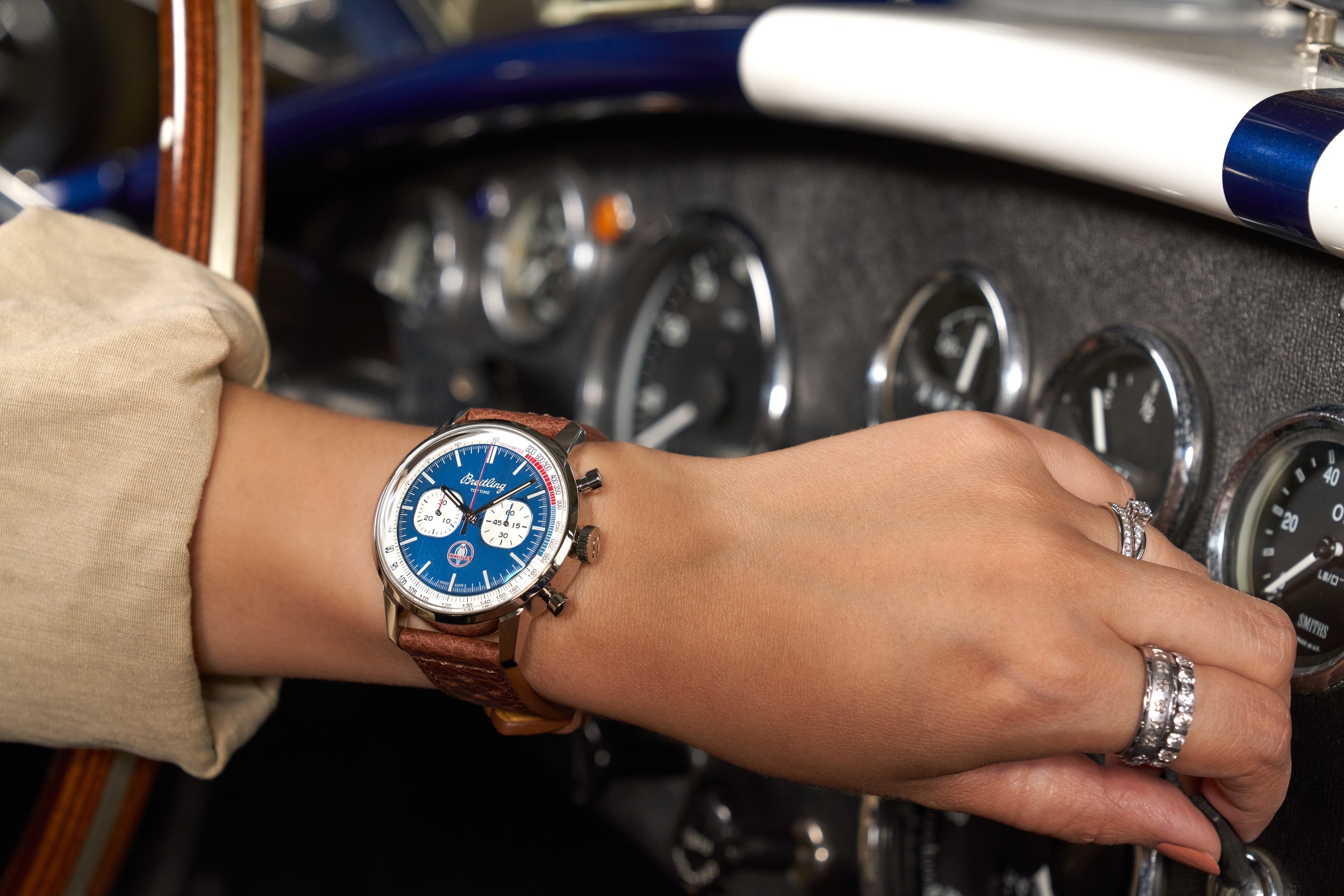 The red and green share the same 42mm case and 13.65mm thickness. The movement is the automatic Breitling 25 (4Hz, 42h power reserve, COSC) offering a 30 second central chronograph hand and a 15-minute and 6-hour totalizers. The blue is smaller, measuring 40mm in diameter and 13.30 mm thickness. The calibre 41 is inside with a 60 second centre chronograph hand and a 30-minute totalizer. 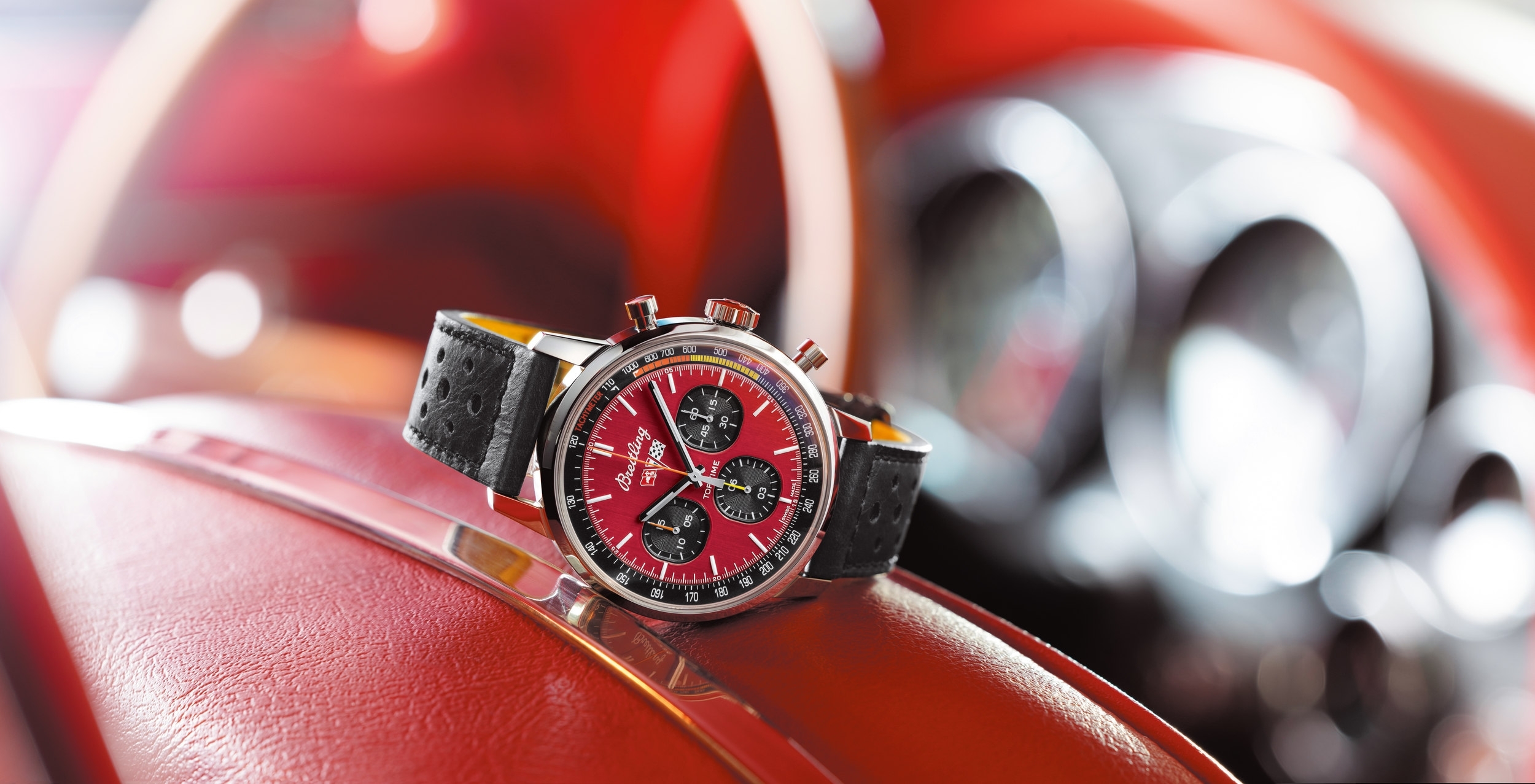 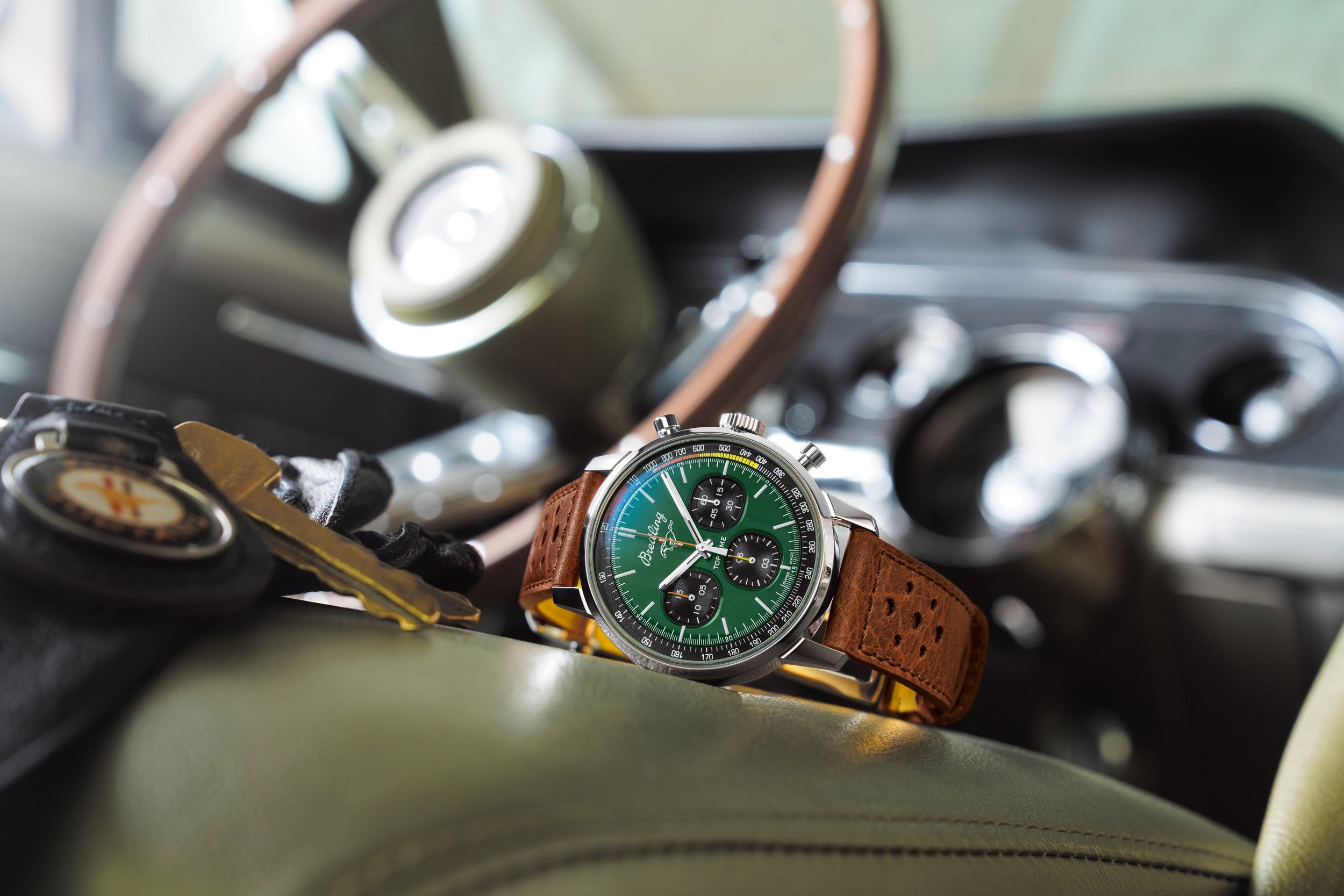 The ending of the Breitling and Bentley collaboration and the introduction of the new Top Time Classic Cars Capsule Collection Breitling is probably not a coincidence. With the new line Breitling is building on the emotional capital of these 60 year-old icons and is shooting at a new audience. The vintage-inspired and pleasingly executed Top Time Classic Cars timepieces have more character and at the same time are more accessible than the Bentley chronos (no in-house B01 movement).

According to Bloomberg, after receiving interest from potential investors, the majority shareholder of Breitling SA, CVC Capital Partners, is considering a potential sale of a significant minority holding in Breitling. CVC bought a majority stake in Breitling in a 2017 deal valued at more than 800 million euros ($952 million). CVC has not commented the information to Bloomberg as yet. 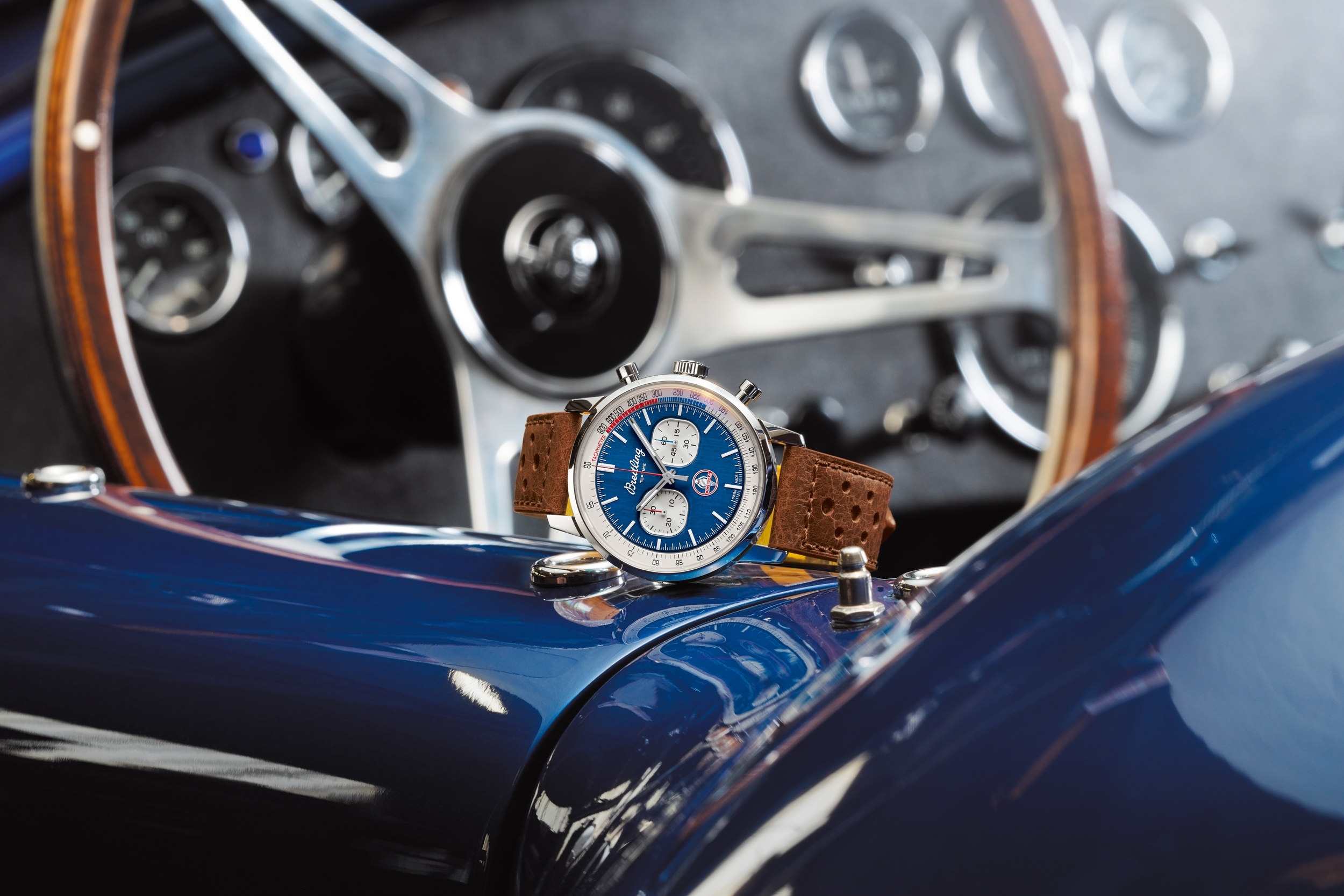 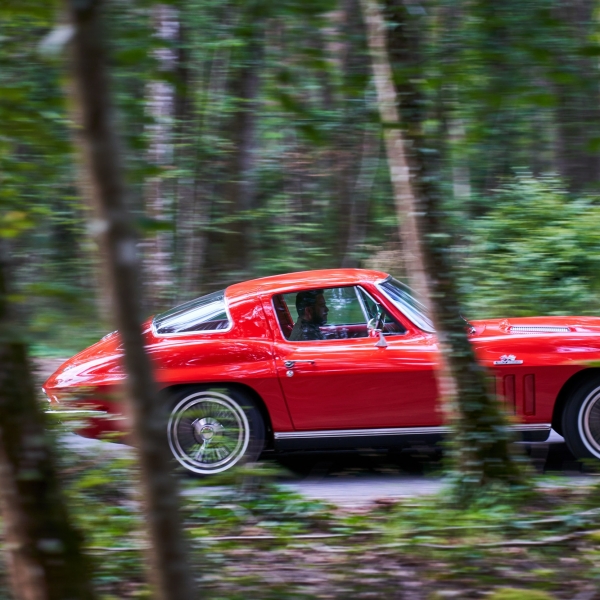 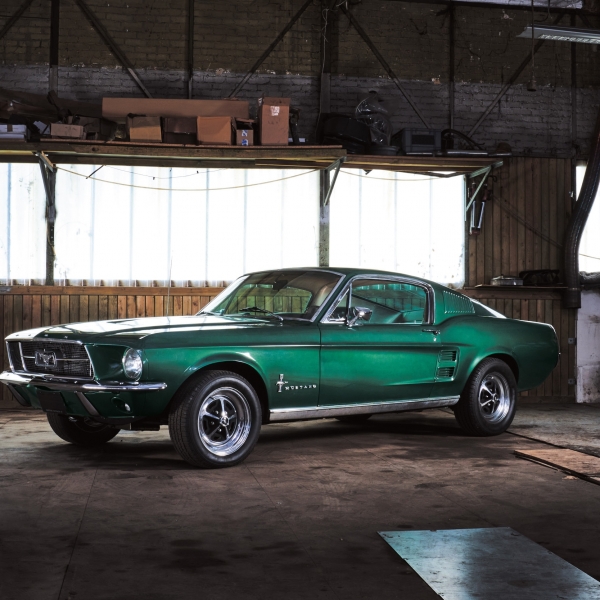 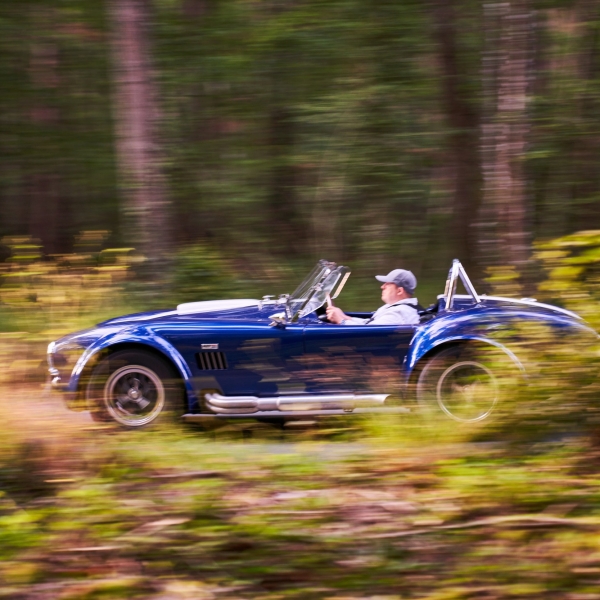 Photo credits: Breitling
All registered trademarks are property of their respective owners.
All rights reserved.

Breitling Superocean Heritage ’57 Pastel Paradise Capsule… Breitling wants us to finally enjoy a colorful life and summer - this June the brand launched the Superocean Heritage ’57 Pastel Paradise Capsule Collection for women.Breitling Chronomat for women We had the opportunity to preview the new Breitling Chronomat women watches in the Breitling boutique in Vienna.Live. Play. Repeat - Breitling Endurance Pro At the start of the Geneva Watch Days, Breitling organised launch events to introduce their Endurance Pro line at the Four Seasons Geneva.