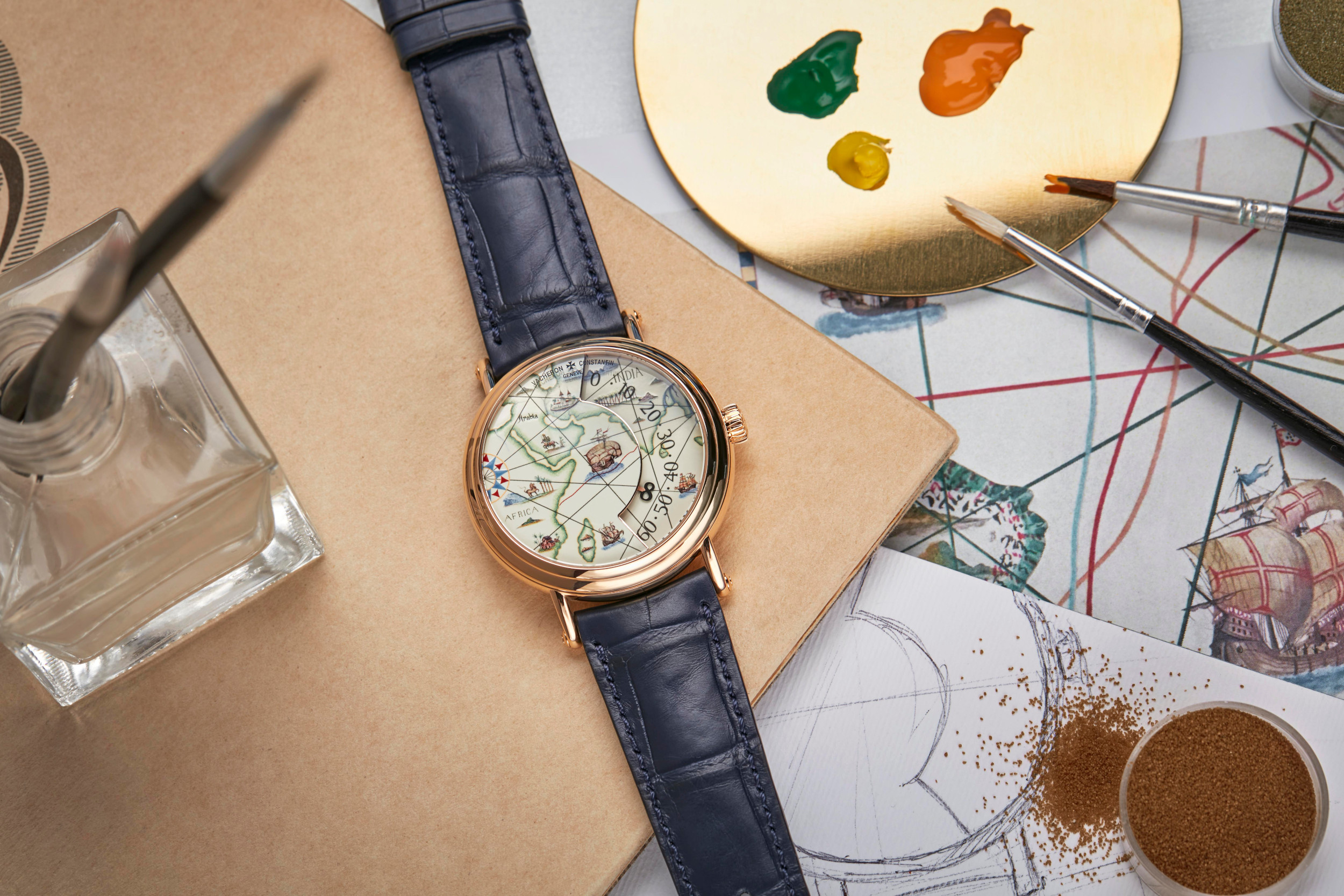 Vacheron Constantin presented a number of novelties under the motto ‘Classic With a Twist’ at the Watches & Wonders 2021. New Métiers D’Art creations have also seen the light with a discrete satellite time display as a twist.

I am fond of artistic pieces and Vacheron Constantin has been well known for their sensitivity in this space. They proudly present their skills at events like the Homo Faber in 2018, by issuing jaw-dropping pieces regularly, such as the Métiers d’art Les Aérostiers collection the same year or partnering with the likes of the Musée du Louvre in 2020 to reproduce a selected painting in the museum on a wristwatch for a unique auction. Their susceptibility for the arts goes back in time, which may be witnessed at seasonal exhibitions – like the one that took place at their Geneva boutique in 2014.

In 2021 Vacheron Constantin presented a three-reference series, entitled Métiers d’Art Tribute to great explorers. With the limited series of 10 pieces each, they pay homage to 15th century Portuguese noble explorers Bartolomeu Dias, Vasco da Gama and Pedro Álvares Cabral. A red line on a map inspired by the 1519 Miller Atlas marks the routes of the discoverers. 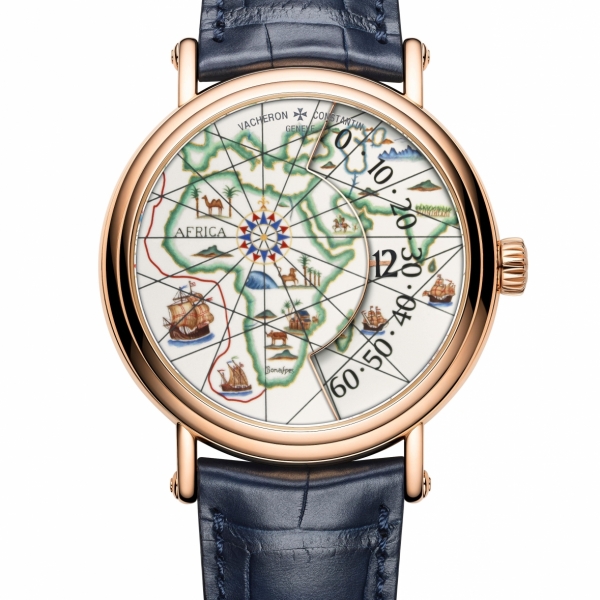 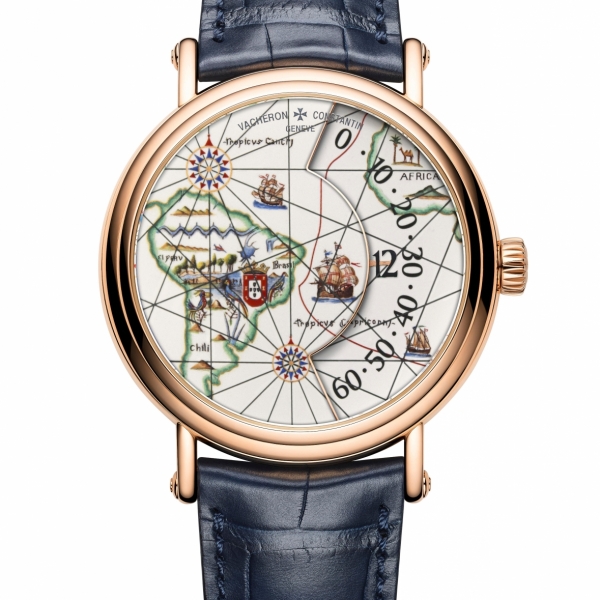 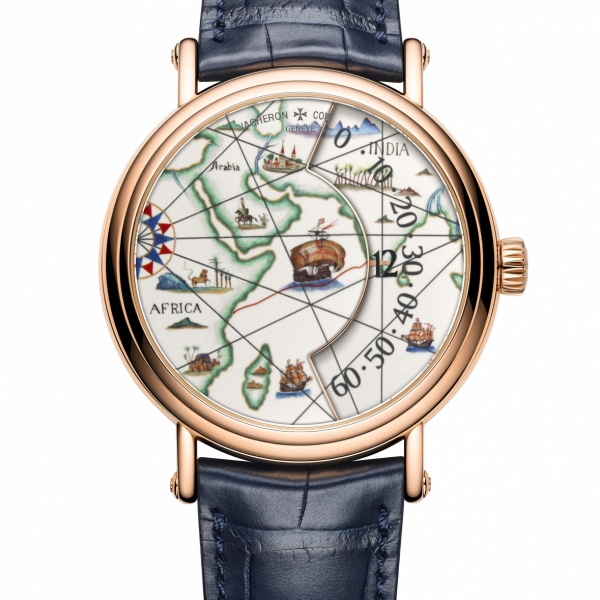 The Miller Atlas, also known as Lopo Homem-Reineis Atlas, is a richly illustrated Portuguese atlas dated from 1519, including a dozen charts. It is a joint work of the cartographers Lopo Homem, Pedro Reinel and Jorge Reinel, and illustrated by miniaturist Antonio de Holanda. It was acquired in 1897 for the National Library of France by the librarian Benigne Emmanuel Clement Miller, hence the name Miller Atlas.

Bartolomeu Dias (1450 – 1500) was from the Portuguese royal family who sailed around the southernmost tip of Africa in 1488. Dias’s expedition reached its furthest point on 12 March 1488 when it anchored at Kwaaihoek, near the mouth of the Boesmans River before he was forced by his crew to return to Portugal. The discovery led to Portugal bypassing the expensive middlemen on the overland spice trade route to India and the Far East.

Vasco da Gama (1464 – 1524) completed Dias’ journey and as the first European reached India by sea. Interestingly, Dias helped in the construction of the São Gabriel and its sister ship the São Rafael that Gama sailed with in 1498. He travelled three times to India altogether where he died of malaria on Christmas Eve 1524. Gama was responsible for Portugal’s success as an early colonising power.

Pedro Álvares Cabral (ca. 1467 – ca. 1520) conducted the first substantial exploration from Europe to South America in 1500. He departed with 13 ships on 9 March 1500 and landed in Brazil on 22 April, which he claimed for the Portuguese Crown. He sailed along the coast and from here he turned eastward to continue his journey to India. He reached it with major losses of both ships and lives. Cabral finally returned to Lisbon on 21 July 1501 with 7 ships, 5 of them filled with a cargo of spices. He later lost the favour of King Manuel I and retired to a private life in Portugal. 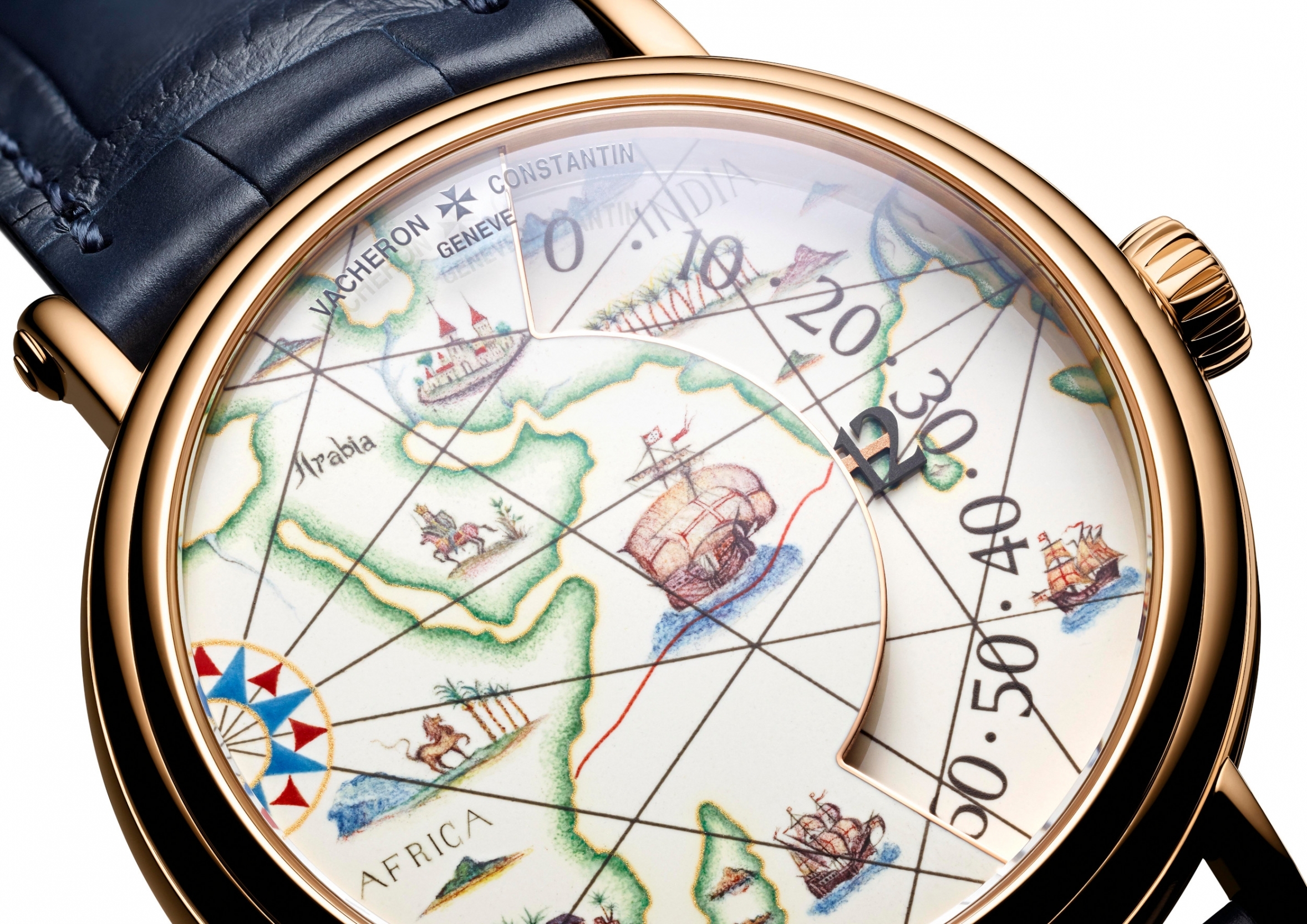 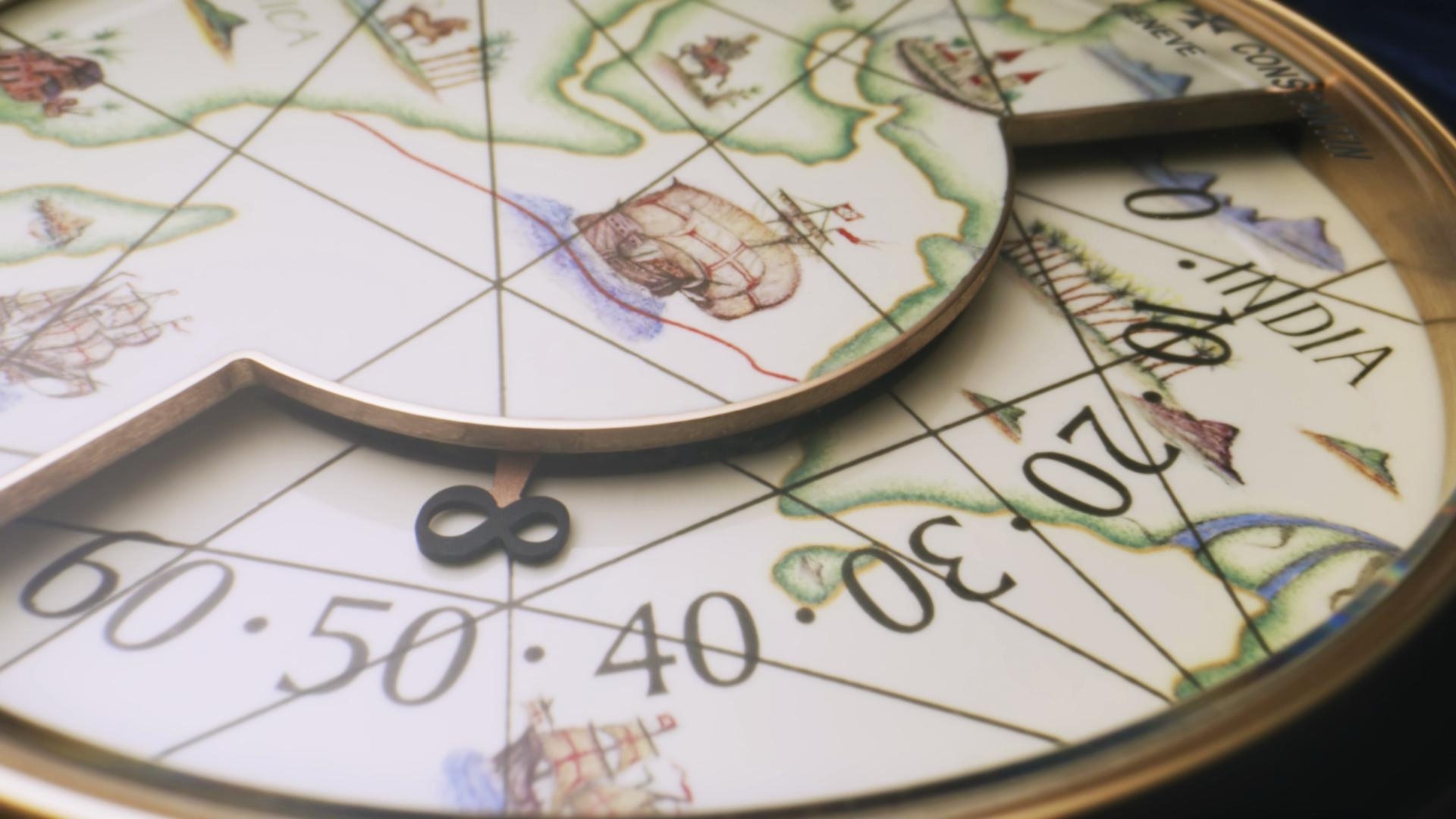 The beautiful Grand Feu enamel work is emphasised by the restrained time display. It is a similar satellite mechanism that appears in the aesthetically very different URWERK pieces, such as the UR-T8. Vacheron Constantin’s 5.45 mm thick Calibre 1120 AT incorporates three satellites with four enamelled numerals each. At any point only one is visible, pointing to the appropriate minute numeral via the 120 degree opening. The balance frequency is 2.75 Hz and the self-winding movement has a power reserve of 40 hours. The case is 41mm in diameter and is made of 18K 4N pink gold. 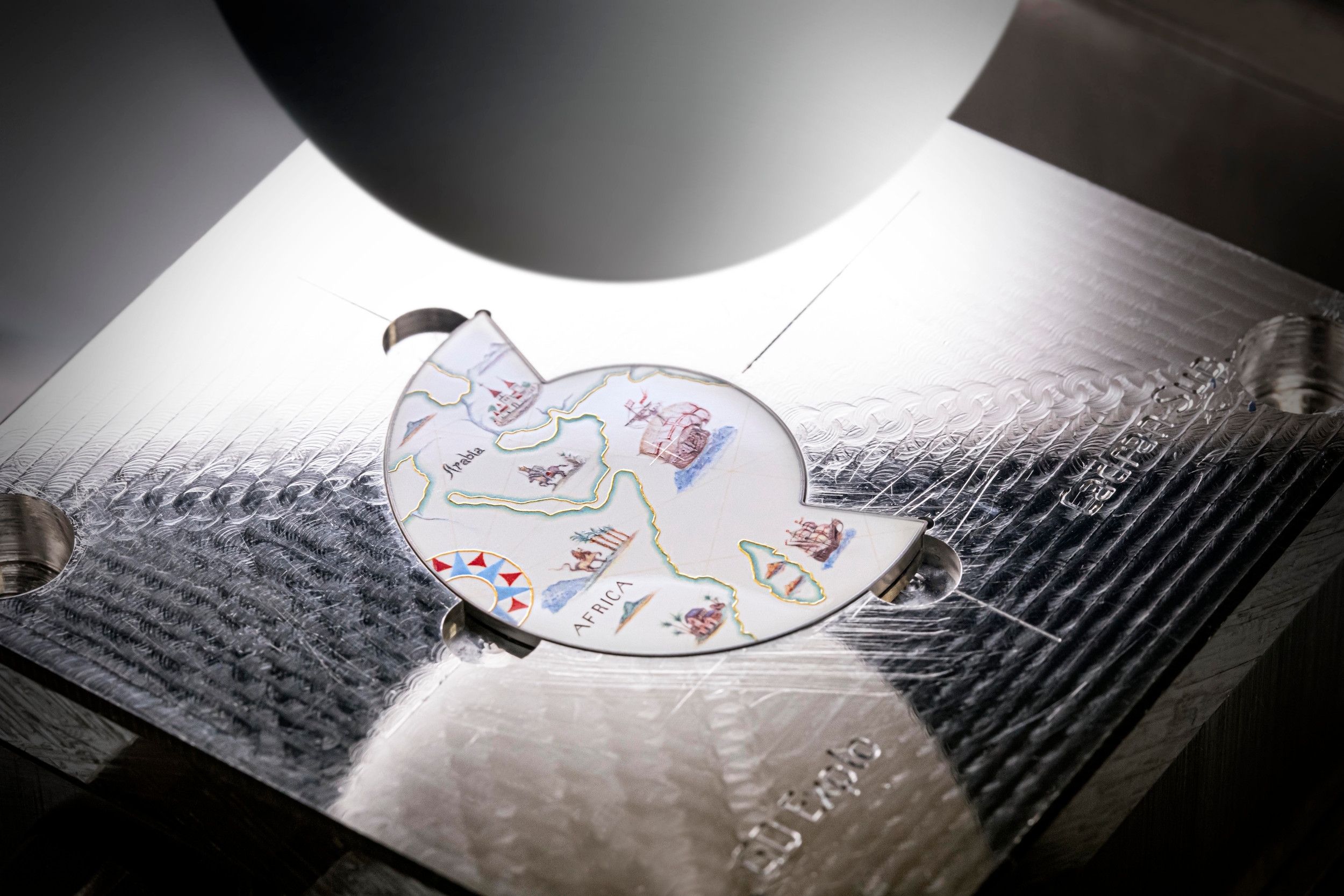 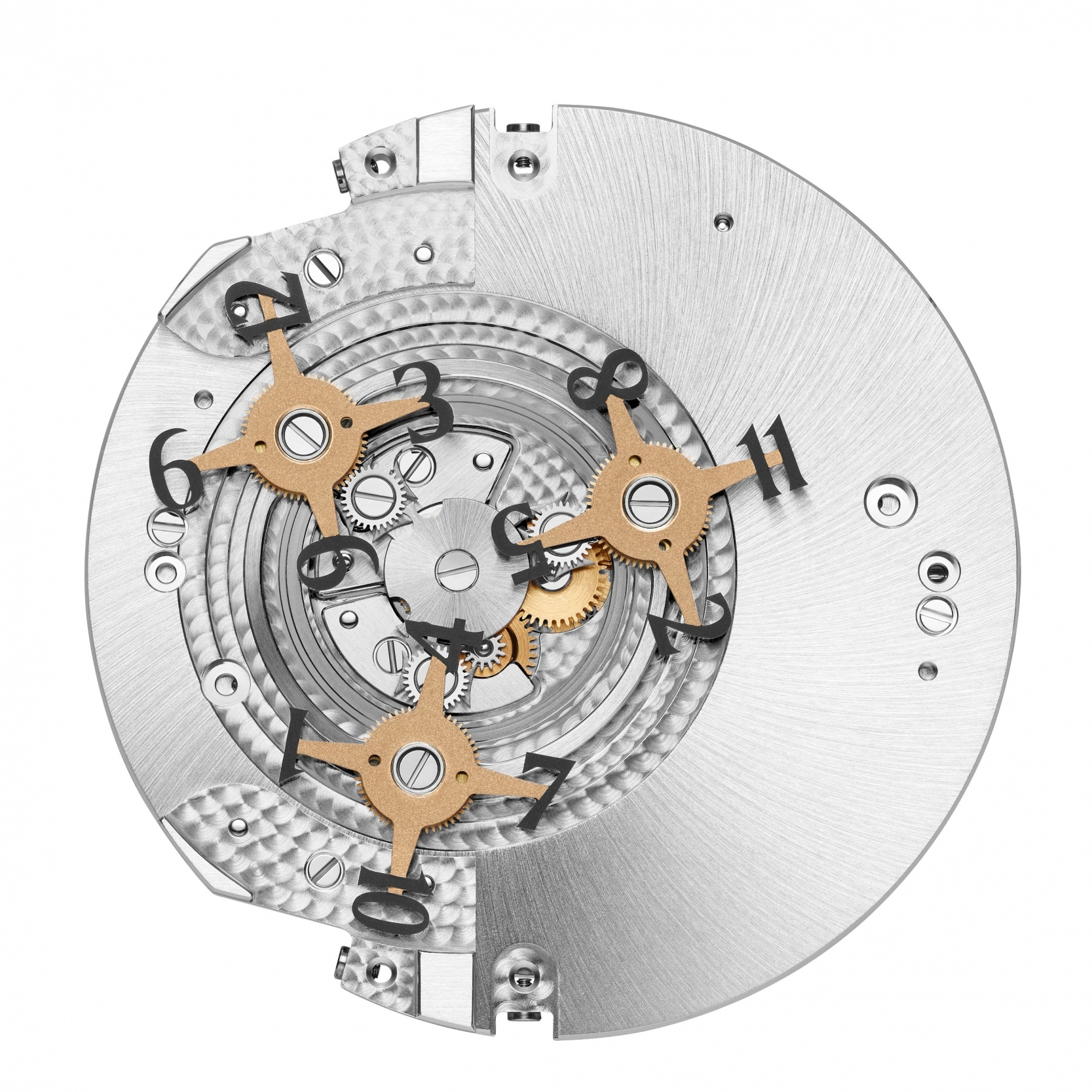 Photo credits: Vacheron Constantin
All registered trademarks are property of their respective owners.
All rights reserved.

A Masterpiece on your wrist Vacheron Constantin is auctioning a Les Cabinotiers watch at the ‘Bid For the Louvre’ auction organised online from December 1st to 15th by the Louvre Museum and Christie's, with the support of Drouot.Vacheron Constantin x Louvre at Homo Faber 2022 Vacheron Constantin is back to Homo Faber - celebrating artisanal talents in a wide range of disciplines, like fine watchmaking, enamelling or engraving. The Geneva Maison exhibited at the ‘Details: Genealogies of Ornament’ set in the Nautical School exhibition area at Fondazione Giorgio Cini.Vacheron Constantin - Watches & Wonders, Traditionnelle… One of the most captivating models of the digital Watches and Wonders 2020 has come from Vacheron Constantin’s Grandes Complications workshops. Let’s get to know the Traditionnelle Tourbillon Chronograph from the official visuals until we can hold it in our hands.