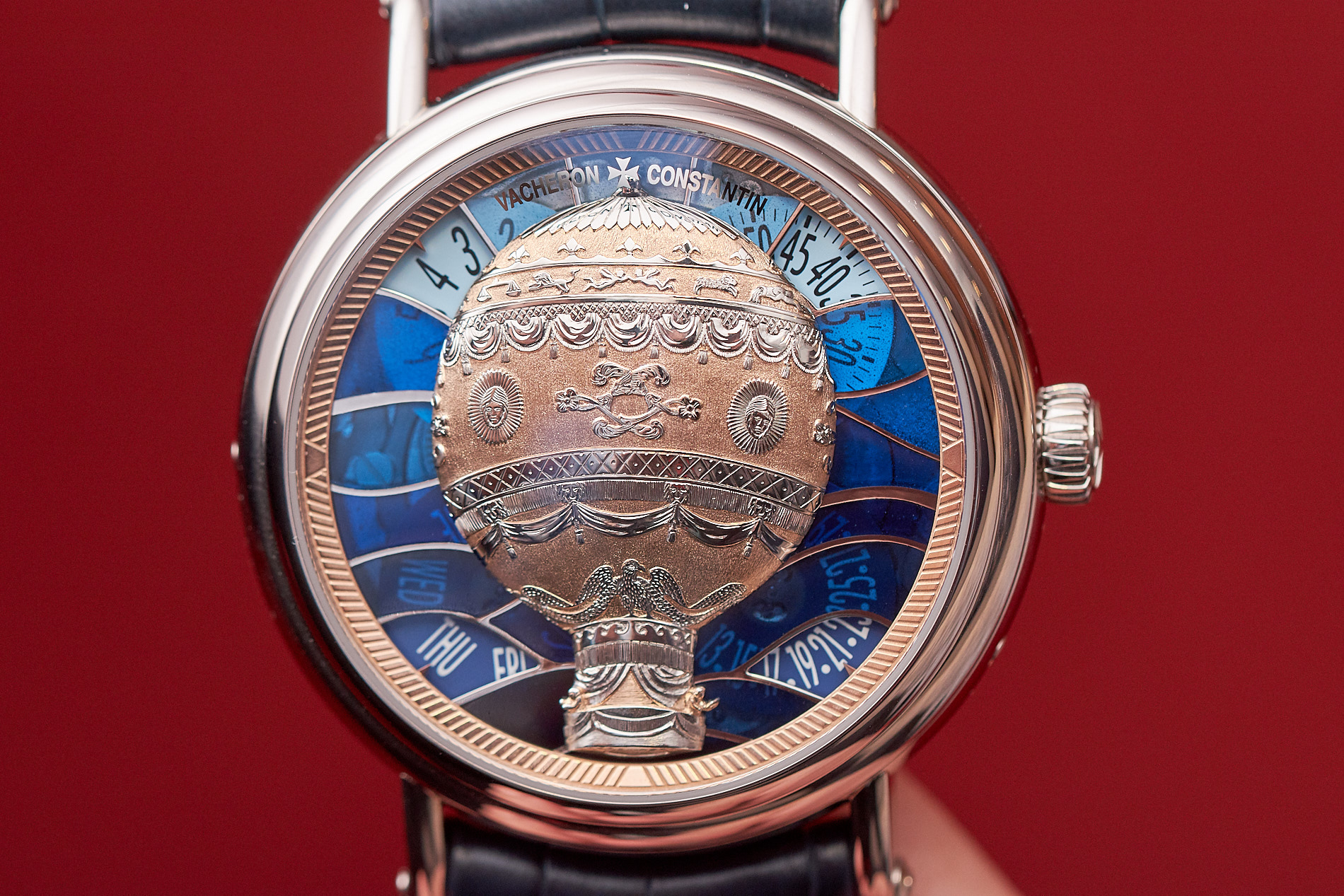 In the Métiers d’art Les Aérostiers collection presented, Vacheron Constantin paid tribute to the journey of fearless balloonists (aérostiers in French). We met the sculpted conquerors of the air floating in translucent ‘plique-à-jour’ enamel at SIHH 2018.

Five highly artistic hand-crafted timepieces tell the stories of five late 18th century hot-air balloon flights. For a more dramatic illusion, the technically challenging translucent ‘plique-à-jour’ enamel was used for decoration. This was the first time that the Maison applied this technique. The hand-engraved micro-sculpted gold balloons that float in the enamel air are the exact miniatures of the five balloons taking flight between 1783 and 1785.

In high jewellery and fine watchmaking there are many decorative techniques, including special enamel processes. In this case the artisans of Vacheron Constantin applied the ‘plique-à-jour enamelling method. It means ‘open to light’ in French and it was developed in France and Italy in the 14th century. The technique has been used mainly for making vessels and jewellery. The ‘plique-à-jour’ is similar to the ‘cloisonné’ and ‘champlevé’ technique, so to understand it a bit more, let’s overview these three techniques.

During ‘champlevé’, the moist powder enamel is applied to the engraved patterned metal surface, thus the enamel seeps into the patterns, and it is then fired. During the creation of the base metal pattern, extremely high quality requirements have to be met, because even the smallest unevenness can prevent the appropriate binding of the enamel. When the surface has cooled, it is polished with very fine sandpaper. The un-carved portions of the original surface remain visible as a frame for the colourful enamel designs. As mentioned above, the ‘cloisonné’ technique is similar, but in this case there are small wires added on top of the metal to create the enamel compartments. (See a video about ‘champlevé’ and ‘cloisonn’ from the master enameller of Vacheron here.)

‘Plique-à-jour’ enamel lets the light shine through the transparent or translucent enamel, like in the stained glass windows. This technique is similar to ‘cloisonné’ since the enamel is applied in cells but the material – usually an unattached little metal or mica surface – which was applied on the reverse of the enamel can be easily removed after the enamels have been annealed and cooled.

The special transparency of the ‘plique-à-jour’ enamel reveals the gear trains and discs of the Calibre 2460 G4/1 underneath.

The first ‘aerostatic’ flight in history was an experiment carried out by Joseph-Michel and Jacques-Étienne Montgolfier at Versailles in 1783. On 19 September with a self-made balloon, they made a sheep, duck and cockerel fly in front of Louis XVI (the last King of France before the fall of the monarchy during the French Revolution) and the royal family in Versailles.

The event is commemorated on the first piece in the Métiers d’Art Les Aérostiers line. Underneath the golden balloon animals in the basket are engraved in white gold. 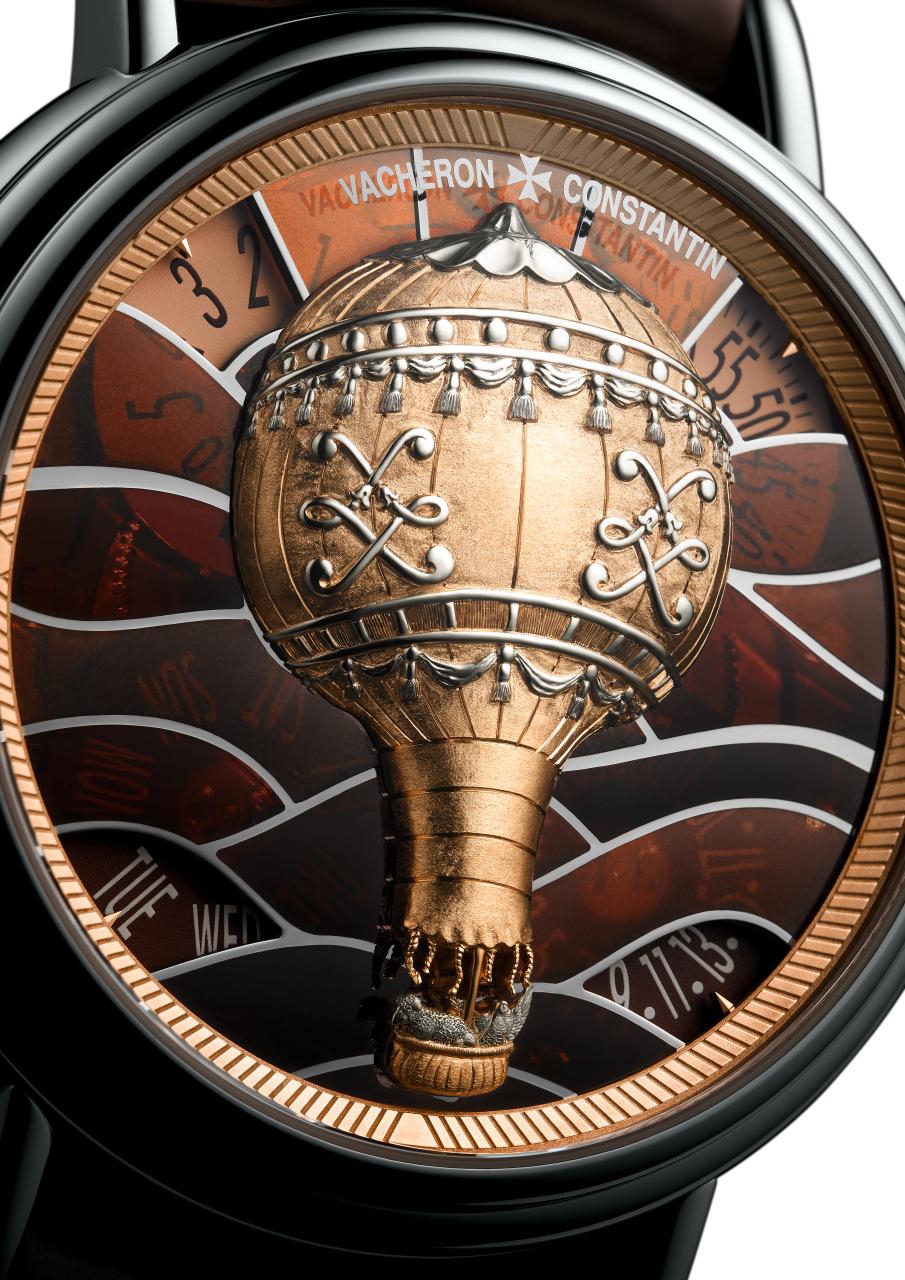 The Château de la Muette is located at the edge of the 16th century park the Bois de Boulogne in Paris. From the gardens of la Muette, Pilâtre de Rozier and the Marquis François Laurent d’Arlandes made the first successful manned flight in a hot-air balloon in November 1783. This balloon was also built by the Montgolfiere brothers. Interestingly, King Louis XVI ordered that two condemned criminals should take the risk of the first human balloon flight and was later persuaded to permit d’Arlandes and de Rozier to become the first pilots.

Over the sky blue enamel background, this splendid pink and white gold balloon is engraved with symbols of the sun, the zodiac, ‘fleurs de lys’ (a symbol also used by the French royalty including Louis XVI), garlands, insignia and an eagle with outstretched wings. The smooth flow of the delimiting metal in the enamel composition and the shades of its colours really evoke the feeling of air layers surrounding the balloon. 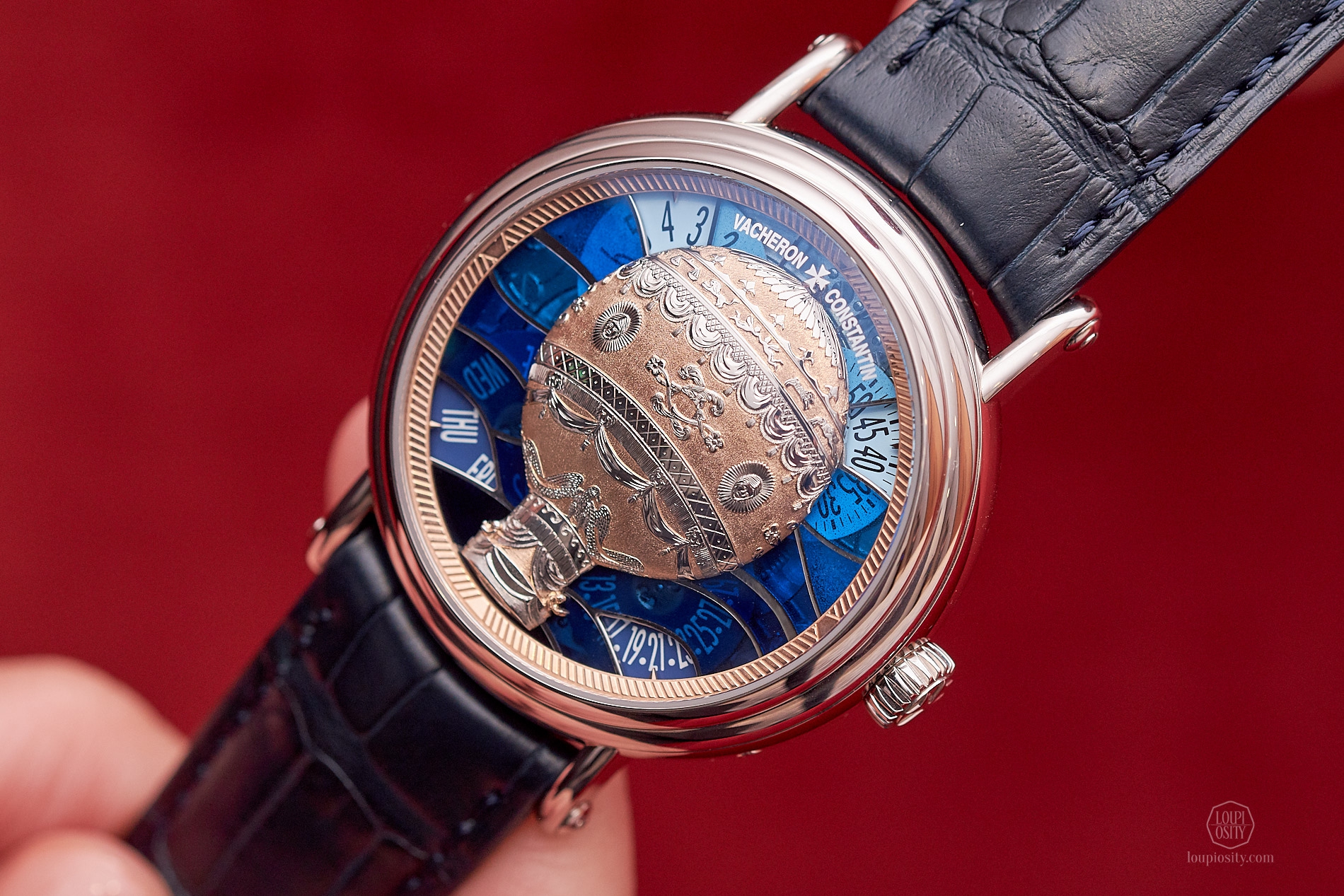 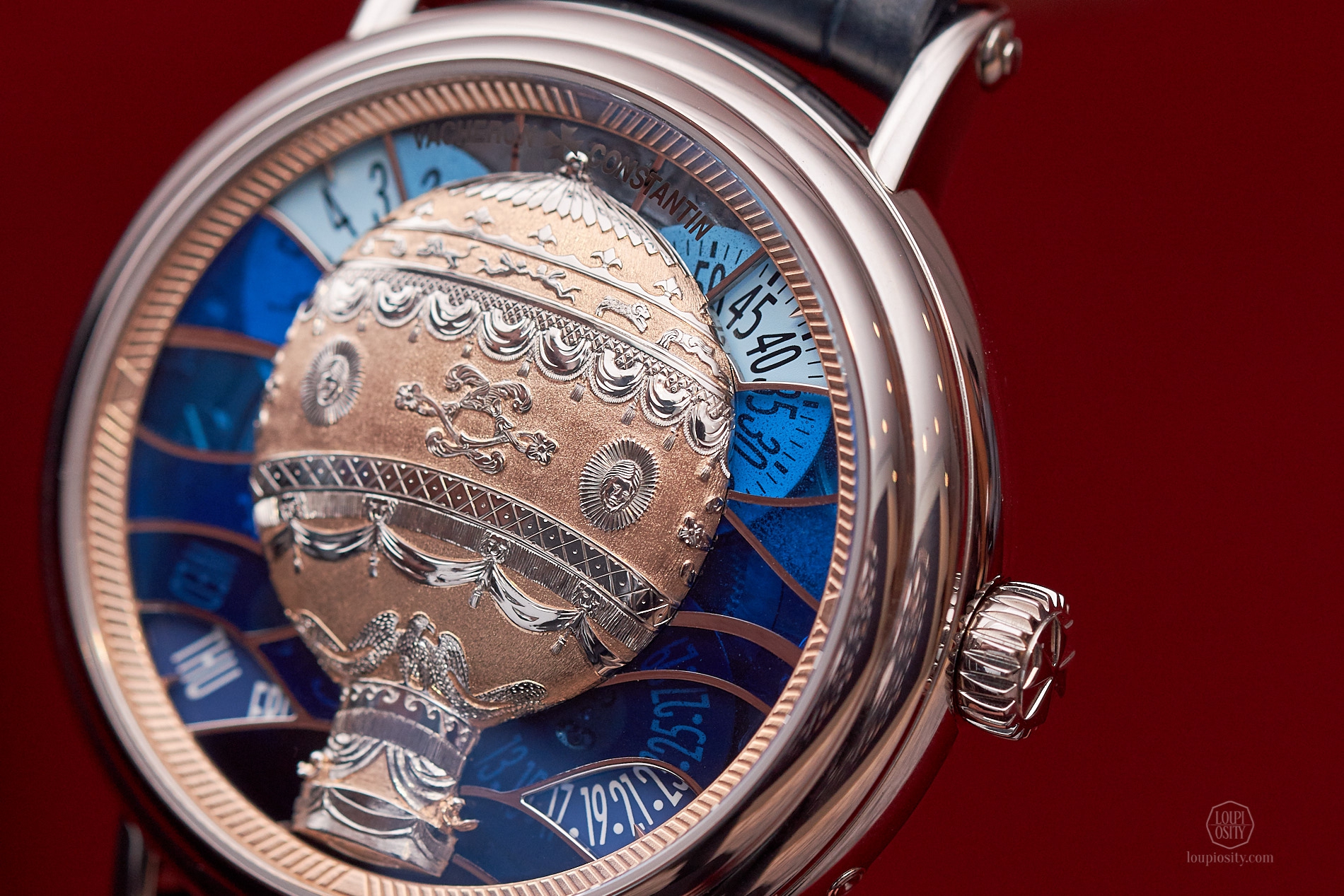 The French inventor Jean-Pierre Blanchard made his first successful balloon flight in Paris on 2 March 1784. He had imagined propulsion mechanisms for guiding a balloon’s trajectory (wings and windmill). On the green dial of this piece you can find the system of wings built for this purpose. He held the first flight records in many countries and even continents – being the first to balloon in the US. Blanchard also tested the parachute invented by Sébastien Lenormand first on a dog in 1785 and later on himself, when he had to flee from a damaged balloon in 1793. 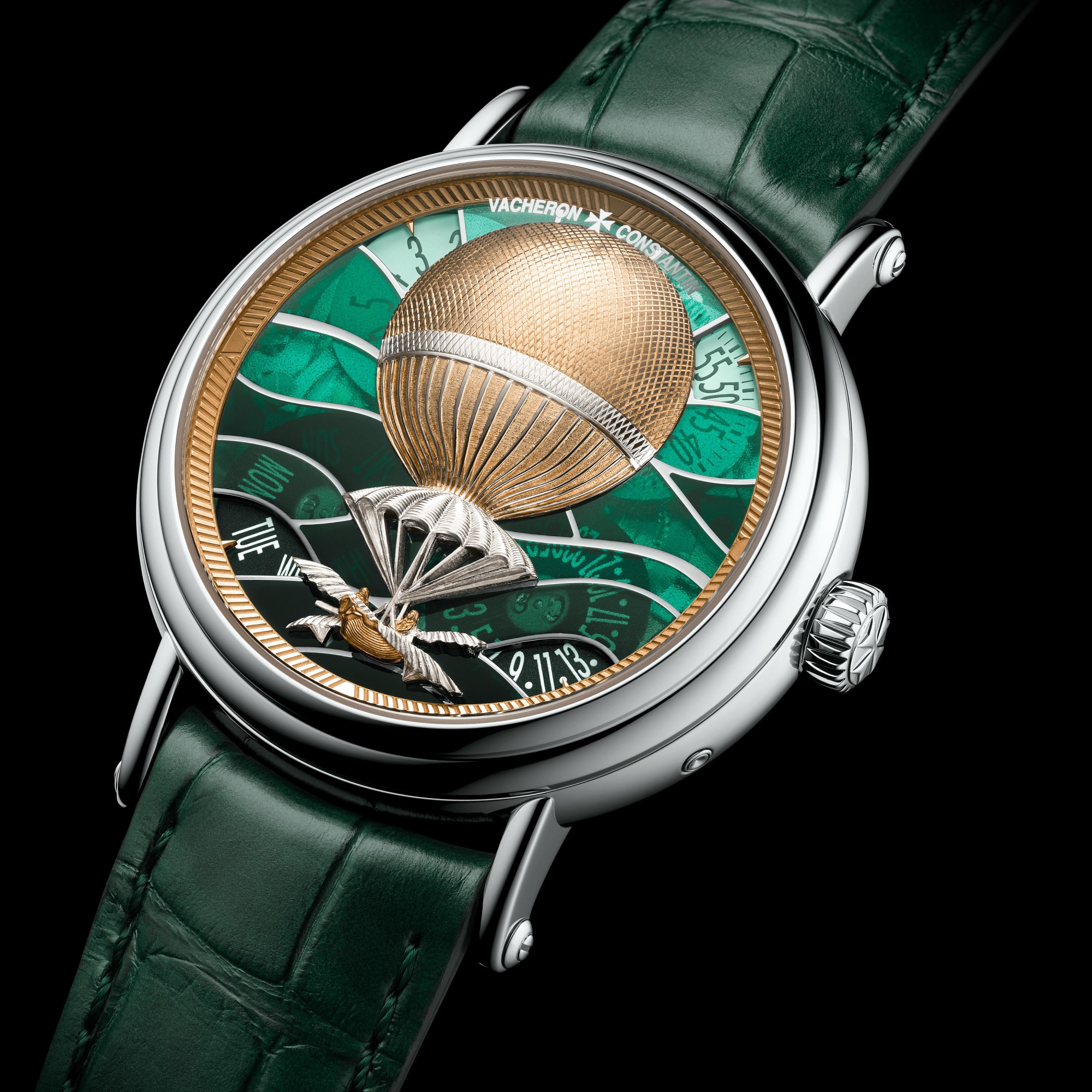 Balloon fever spread across the country (in fact even outside thanks to Blanchard). On 3 May 1784, the beautiful ‘La Bordelois’ (depicted by Vacheron Constantin’s timepiece) was scheduled to take off with Candide Frédéric Antoine de Grassi (a physician) and a perfumer called Périer from the Jardin public in Bordeaux. However, due to the bad weather conditions they could not fill the balloon and lift off. The public disappointment caused by the thwarted attempt ended up in serious unrest from the crowd. A month later on 16 June, Antoine Darbelet (a lawyer), Jean Chalifourt (an architect) and Jean-Baptiste-Alexandre Désgranges (a merchant) made a successful hot balloon flight with their own-built 66 foot Montgolfiere from the Hopital de la Manufacture that filled the elite with pride once again. On 26 July, they did a second flight with an enlarged balloon. (Source: The Imagined Empire: Balloon Enlightenments in Revolutionary Europe, Prof Mi Gyung Kim) 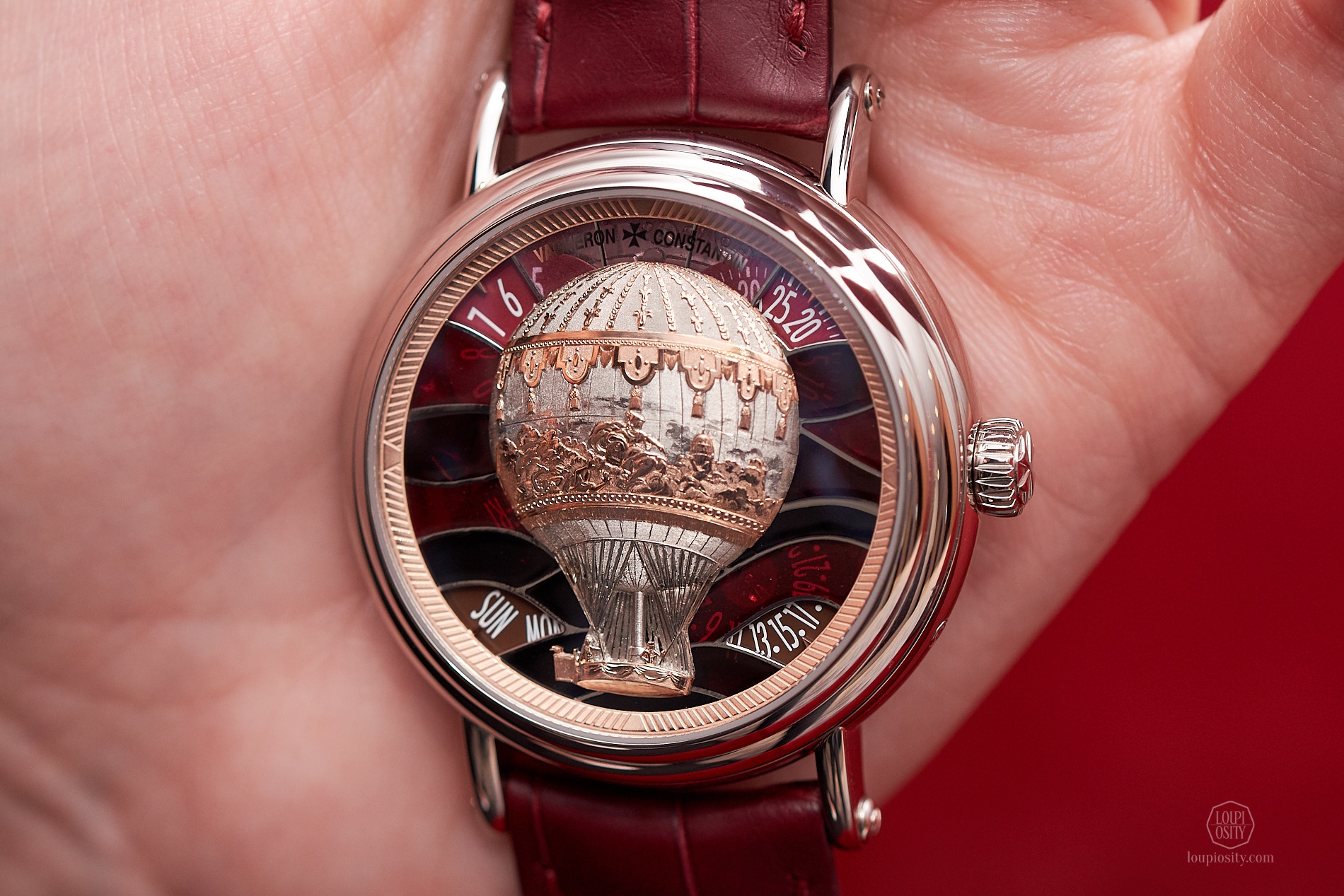 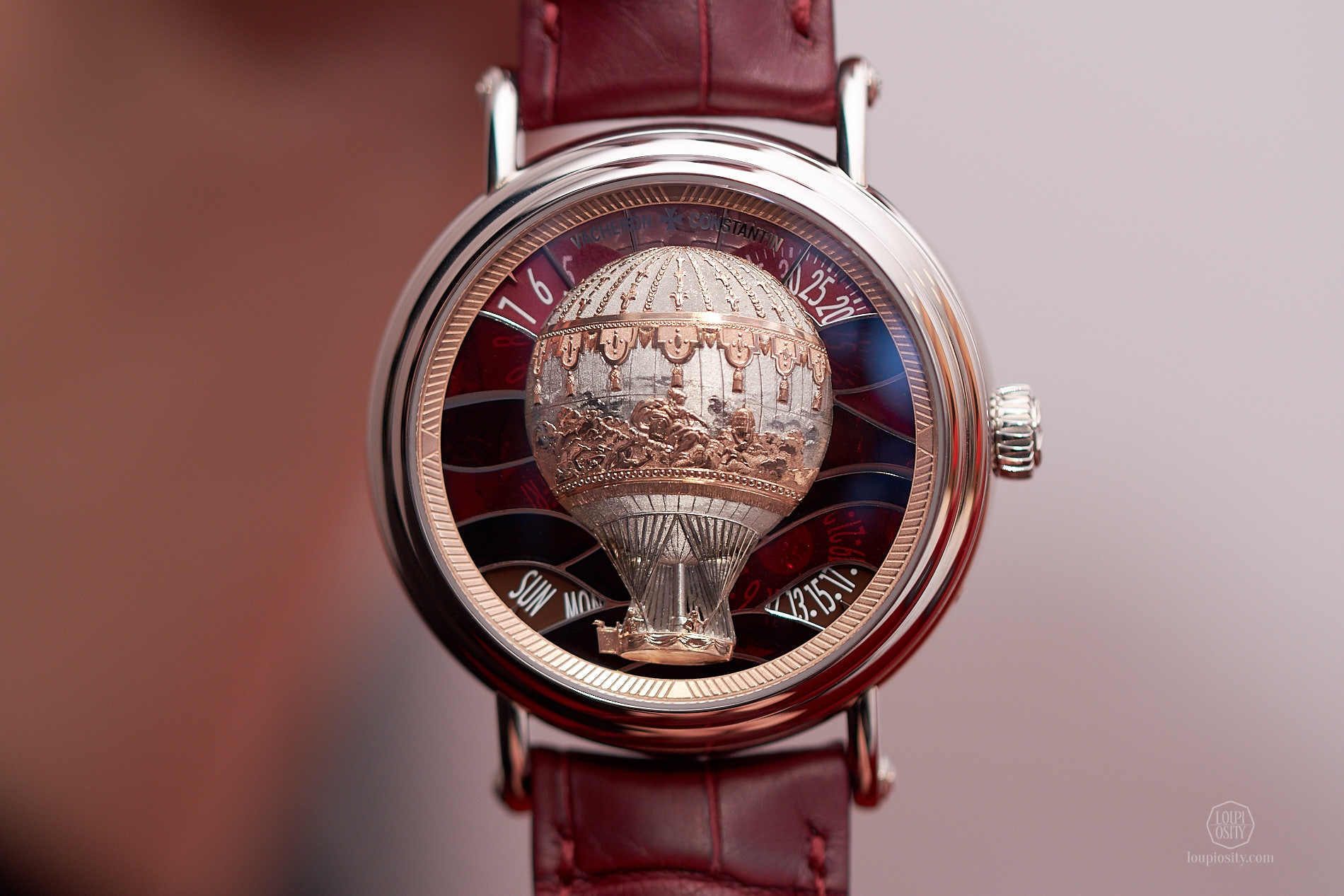 Jean-Baptiste Madier made a flight with ‘Lou Globo’ from Bagnols-sur-Cèze in 1785. On Vacheron’s timepiece this impressive balloon has a white and yellow gold surface and the blue upper part is coloured by electroplating.

All five designs will be available in five numbered editions. 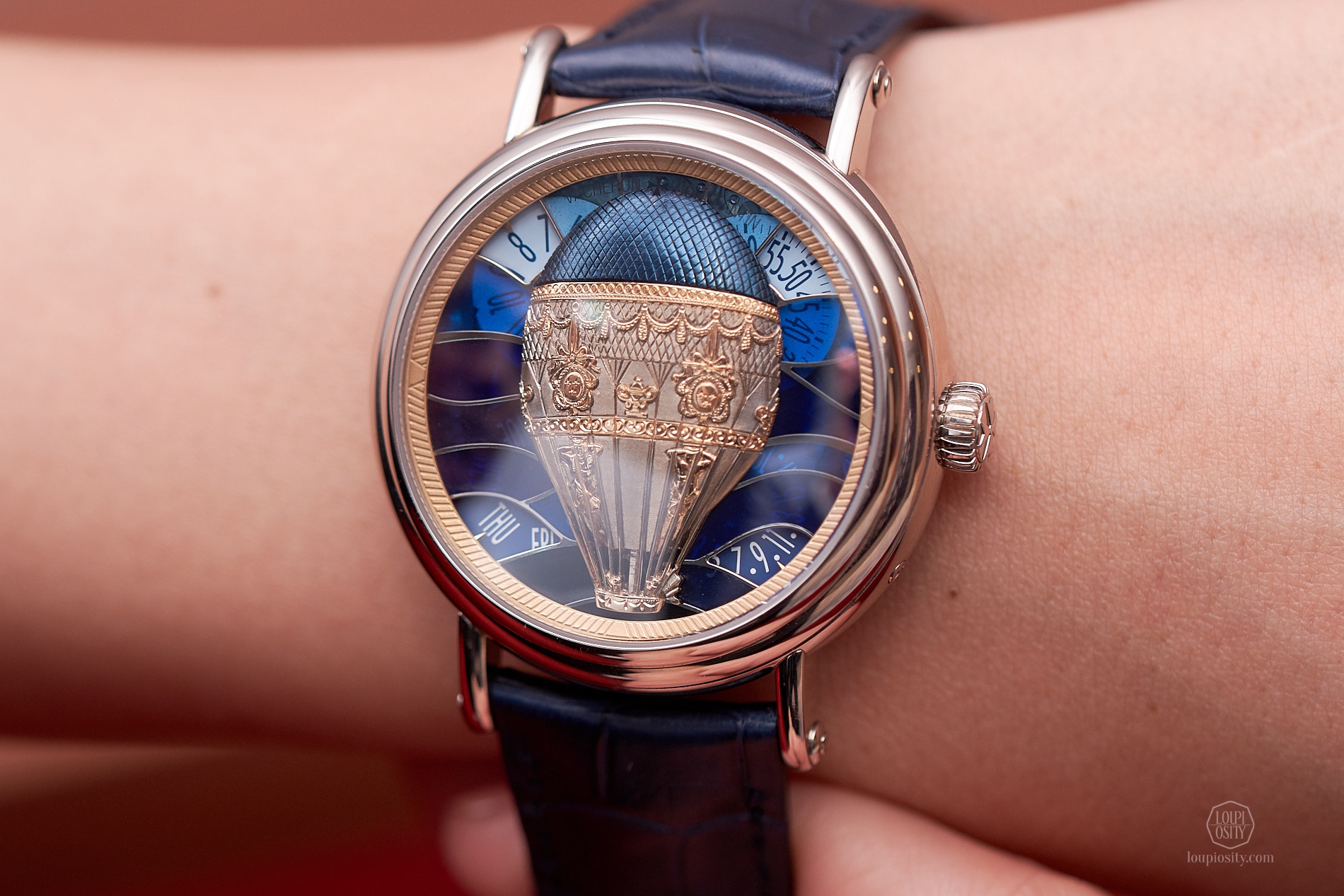 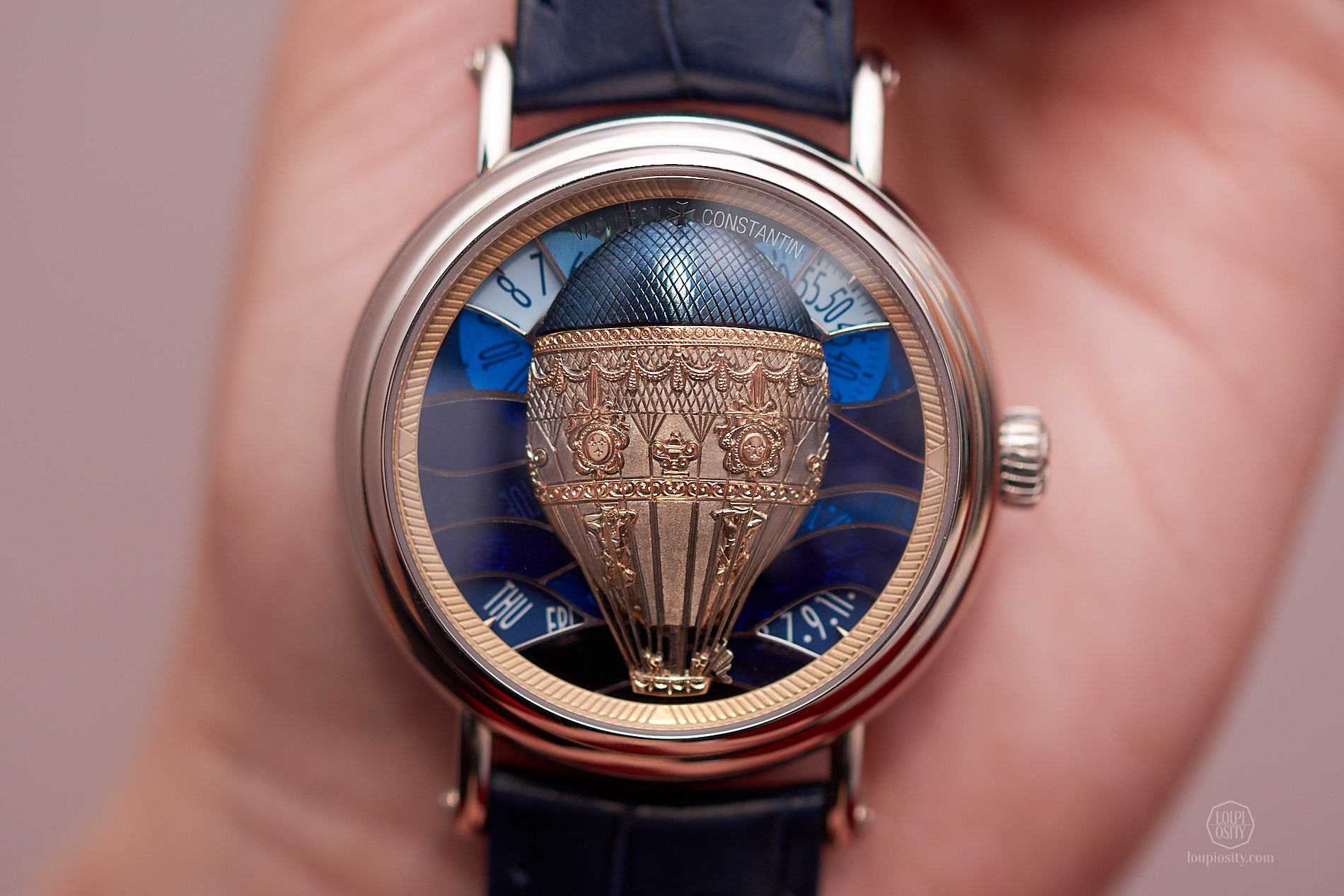