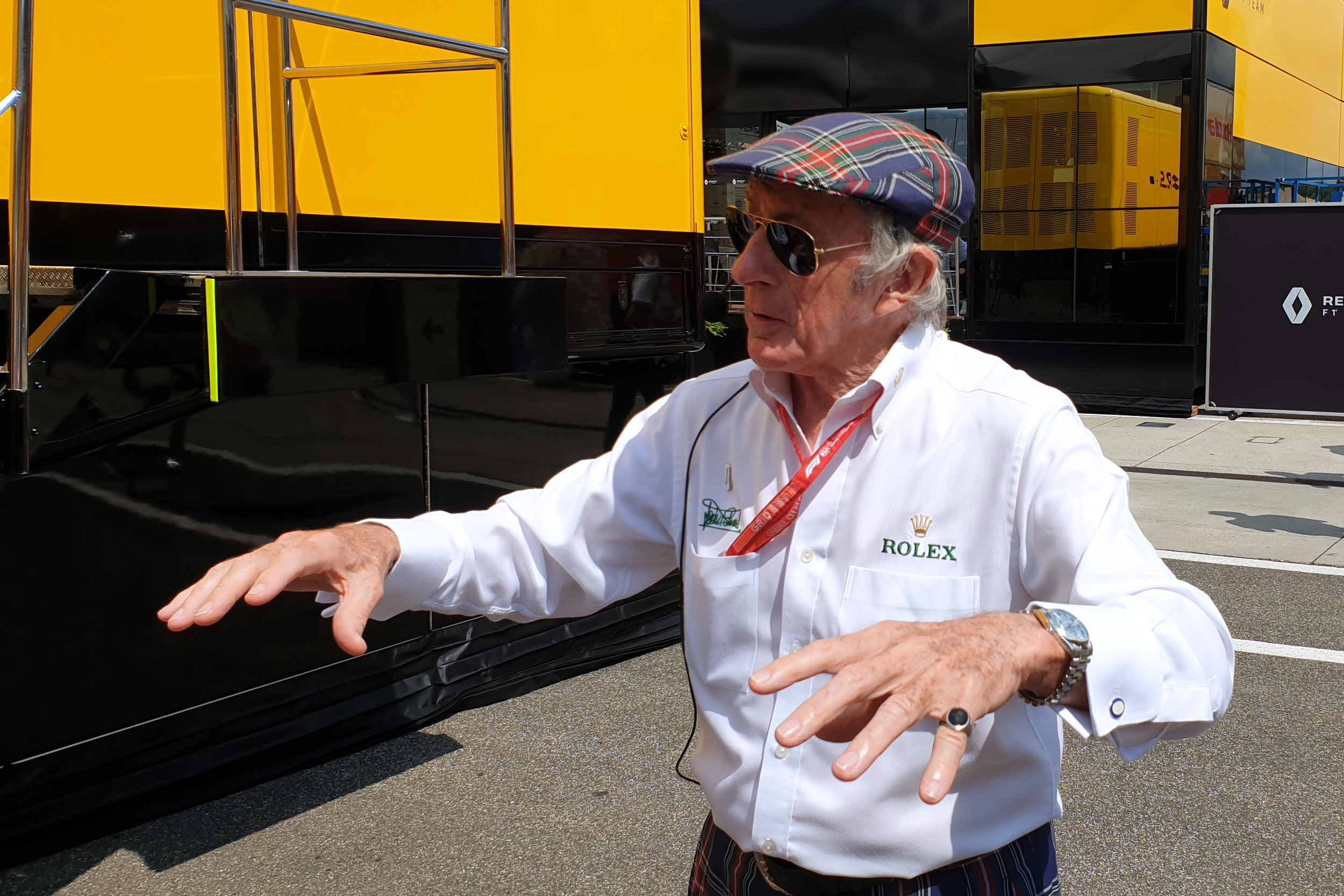 Sir Jackie is travelling with the F1 circus all over the planet tirelessly to entertain the guests of Rolex with his remarkable style and to promote his charity fund. He has been partnering with Rolex for more than 51 years now. We enjoyed his company at the Petite Genève Petrović boutique and in the Paddock of the HungarianGP.

‘If you do nothing, nothing will happen. So you gotta move.’

Sir Jackie Stewart has packed an awesome amount in his past 80 years, the turn of which he celebrated on 11 June 2019. He was active as a driver in a period when Formula 1 designs had shifted boldly between the extremes: from narrow tyres to wide slick and from no wings to aeroplane-like large blankets. All this in the same decade, when chances for a racing driver to survive for five years were one in three. His driving abilities controlled by his mature mind set and guarded by his lucky star have brought him through those years sound with 27 wins and 3 World Championships. 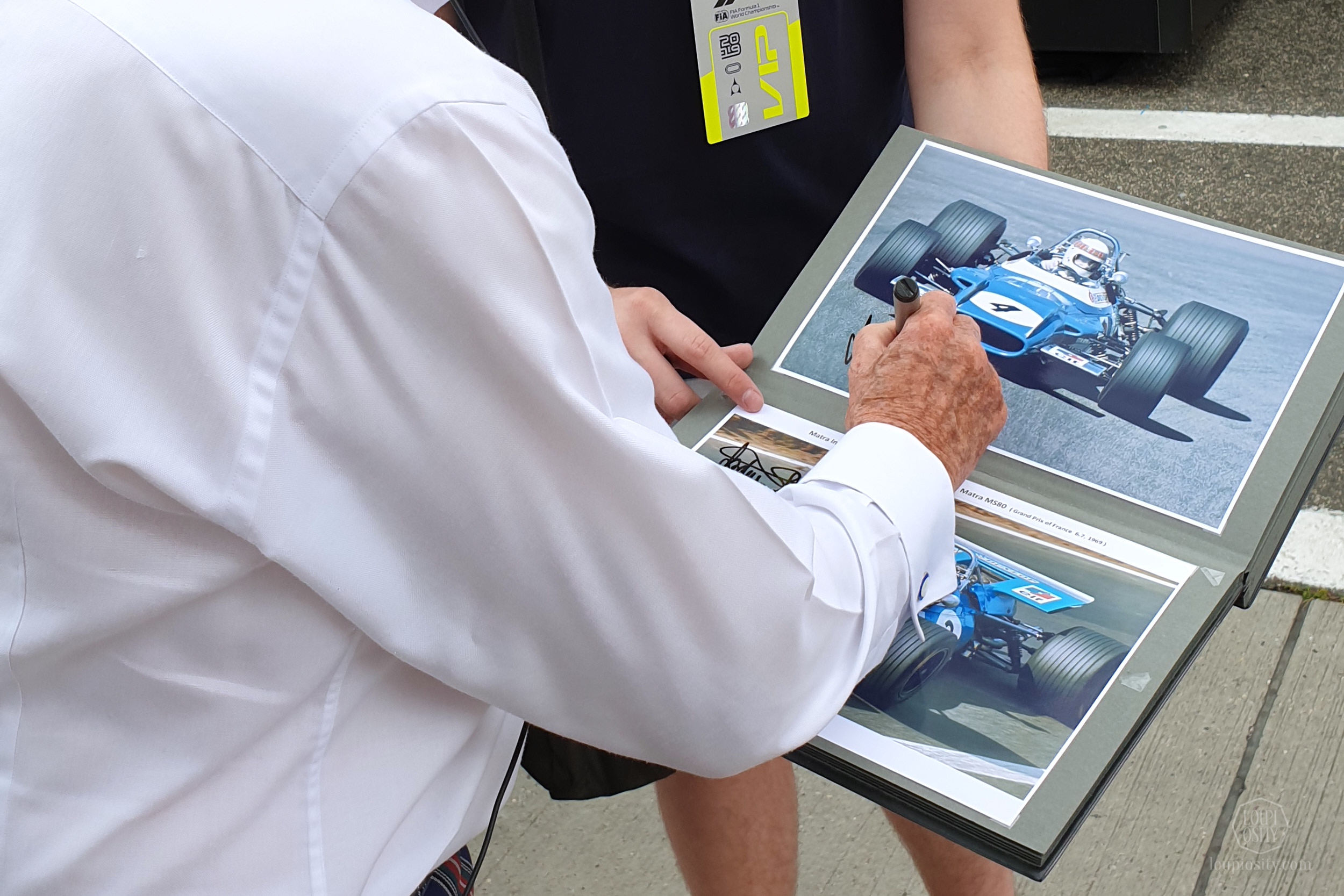 Jackie Stewart was born in Milton, near Glasgow into a car dealer family. Suffering from undiagnosed dyslexia he was exposed to jeer and shame by teachers and kids alike and finished his studies at the age of 15. He began to work in his father’s shop as a mechanic. His grandfather had a game farm where he started shooting rabbits and pigeons.

‘When you’re dyslexic and you find something you’re good at – whoo boy you work at it. In my particular case it was shooting. […] At the age of 14 I started shooting competitively. For the first time in my life, I was good at something. After my dad had thrown clay pigeons up by hand and I would shoot them, I went to my first competition at the age of 14 and won it. Why? Because it was in Scotland, on New Year’s Day. All the competitors were pissed, so Jackie won. What a big deal that was! […] it gave me something that I was good at. And then you focus.’

By working at the garage, he got involved in car racing in 1961 when one rich customer invited him – the mechanic of his cars – to test his abilities on the race track. His talent opened opportunities for him to compete in England. In the next 2 years Stewart won 14 times behind the wheels of Jaguars, Coopers, Marcos and Aston Martins. In 1964 he drove an F3 Tyrell and an F2 Lotus 32-Cosworth. He refused to enter the F1 until 1965, when he debuted in South Africa in the BRM team. In the same year he won the first out of his 27 career titles in Monza. Driving a Matra MS80-Cosworth (a French car run by the British Ken Tyrell’s team and backed up by Elf and Ford) he won the championship in 1969 which was a big feat by a team who had first entered F1 just a year previously. In 1970, he raced with a Ford engine March-701, which Ken Tyrell purchased while the Tyrell 001 was being shaped up in a wooden garage by engineer Derek Gardner. The 1971 season was taken home by Stewart with the Tyrell 003, a whole new development powered by a 3L Ford-Cosworth engine. In 1973, Stewart had already decided to retire from F1 and secured the World Championship for the year, when team mate François Cevert lost his life at a qualifier in the US. Jackie Steward decided to end his season immediately.


Sir Jackie Stewart about his time in the Formula 1 and the long-term partnerships he nurtures with Rolex and Moët & Chandon.

Due to the very low preventive and reactive safety measures in car and track designs as well as on-site life-saving services, such events were very common during this era. Drivers, sharing the enormous risk and relying on each other’s help in danger many times, had special relationships. It is interesting to see their appearances in contemporary television shows and movies. Or watch Jackie Stewart and Graham Hill talking about Stewart’s 1966 accident, when due to the lack of track safety workers Hill came to his rescue. Speeding at the limits with no facilities to manage risks made him one of the loudest and most persistent advocates of safety.

Along with F1 as it was customary back then, he attended races in other series such as the Tasman Series, 24 Hours of Le Mans, European Touring Car Championship, Can-Am or the Indianapolis 500. The Indy 500 attracted him for the financial rewards, which were considerably higher than those of F1 in Europe. His debut earned him the Rookie of the Year title as he had victory in his hands until a mechanical failure a few laps before the finish line (Graham Hill was also the Indy 500 rookie winner then). 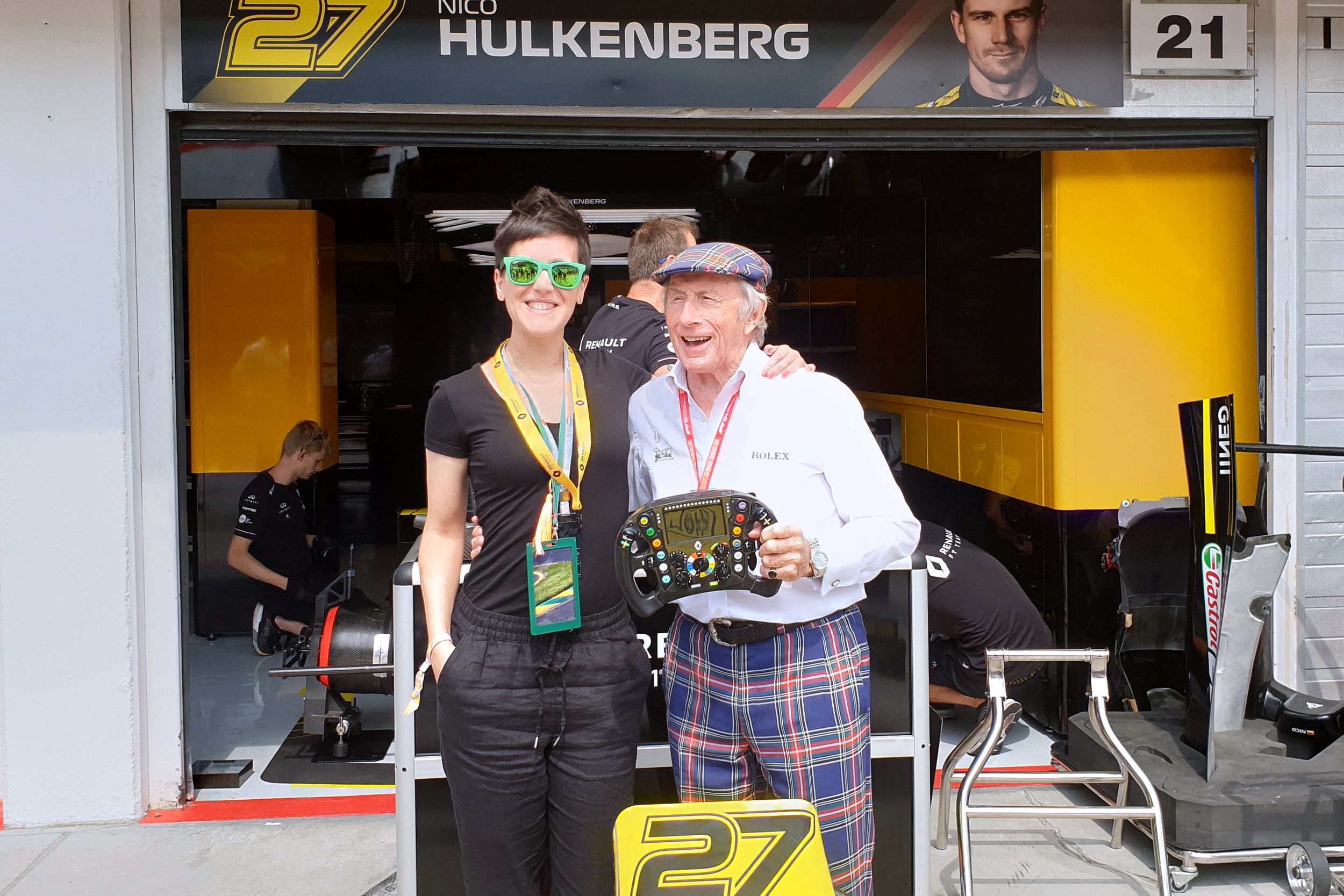 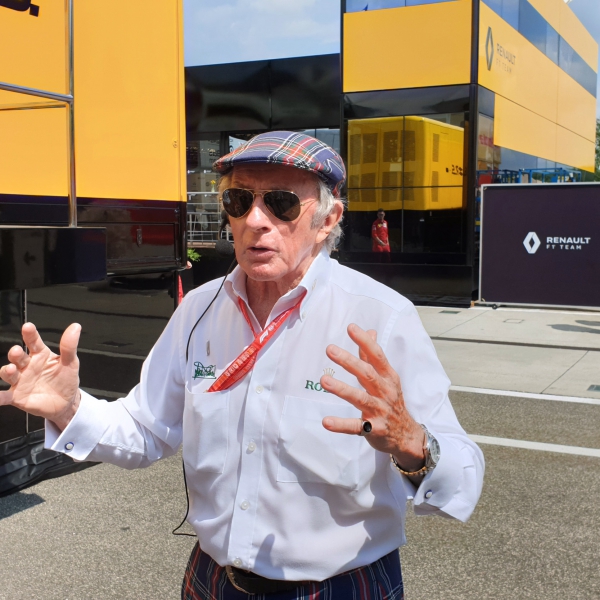 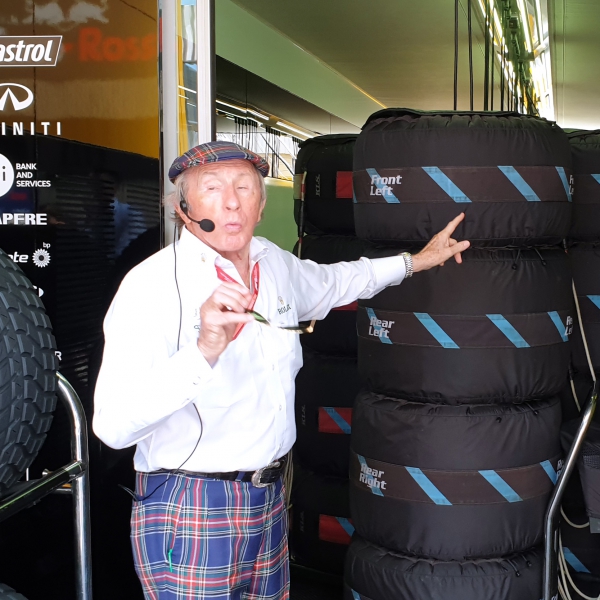 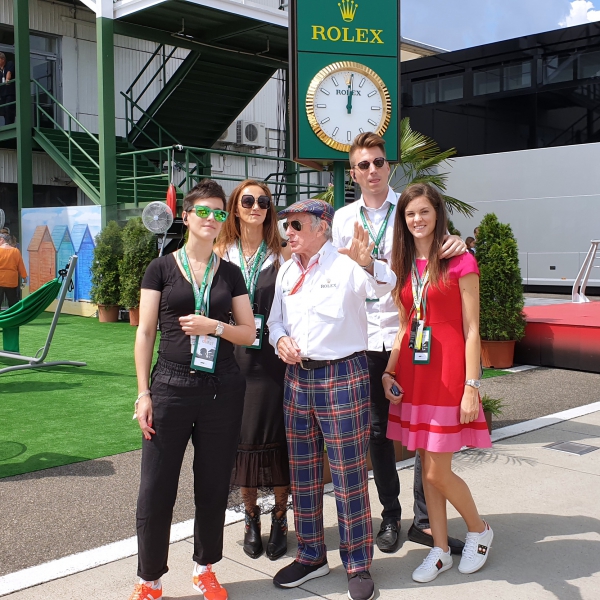 From his income at the Indy 500 he bought a Rolex 18k gold Day Date. This started a long-standing relationship with the watch manufacturer, who recognized the opportunity in the authentic Rolex fan. Sir Stewart commented on his partnership recently when addressing Oxford students in 2015 (we highly recommend watching the entire speech):

‘Rolex, 47 years, 48 come April. I’ve worked hard for Rolex, but I still work hard. Arnold Palmer, myself and a man called Jean-Claude Kelly, who won 3 gold medals at the Olympics in 68 – all three of us are still with Rolex. It’s a record I think, I don’t think it exists in any other corporation in the world. But we have delivered and Arnold is still delivering although he is now 85. He is still the most popular golfer in the world actually.’

Sir Jackie Stewart is working hard, indeed. Over 80, he is still at all the F1 races, visiting Rolex boutiques to share stories of the 51-year partnership, and beyond. He is at the track for the practice laps, the qualifiers and the trophy awards following the race. 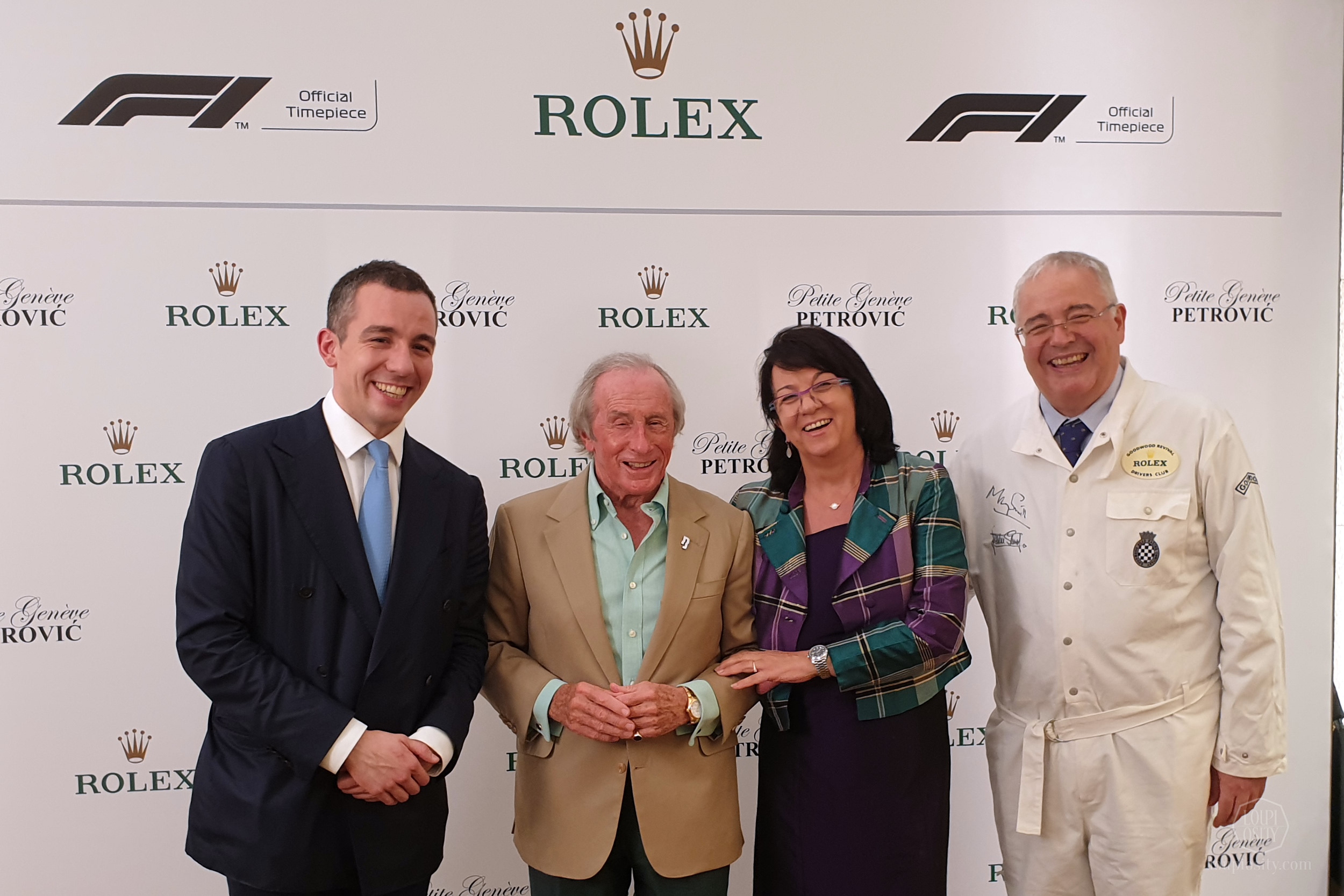 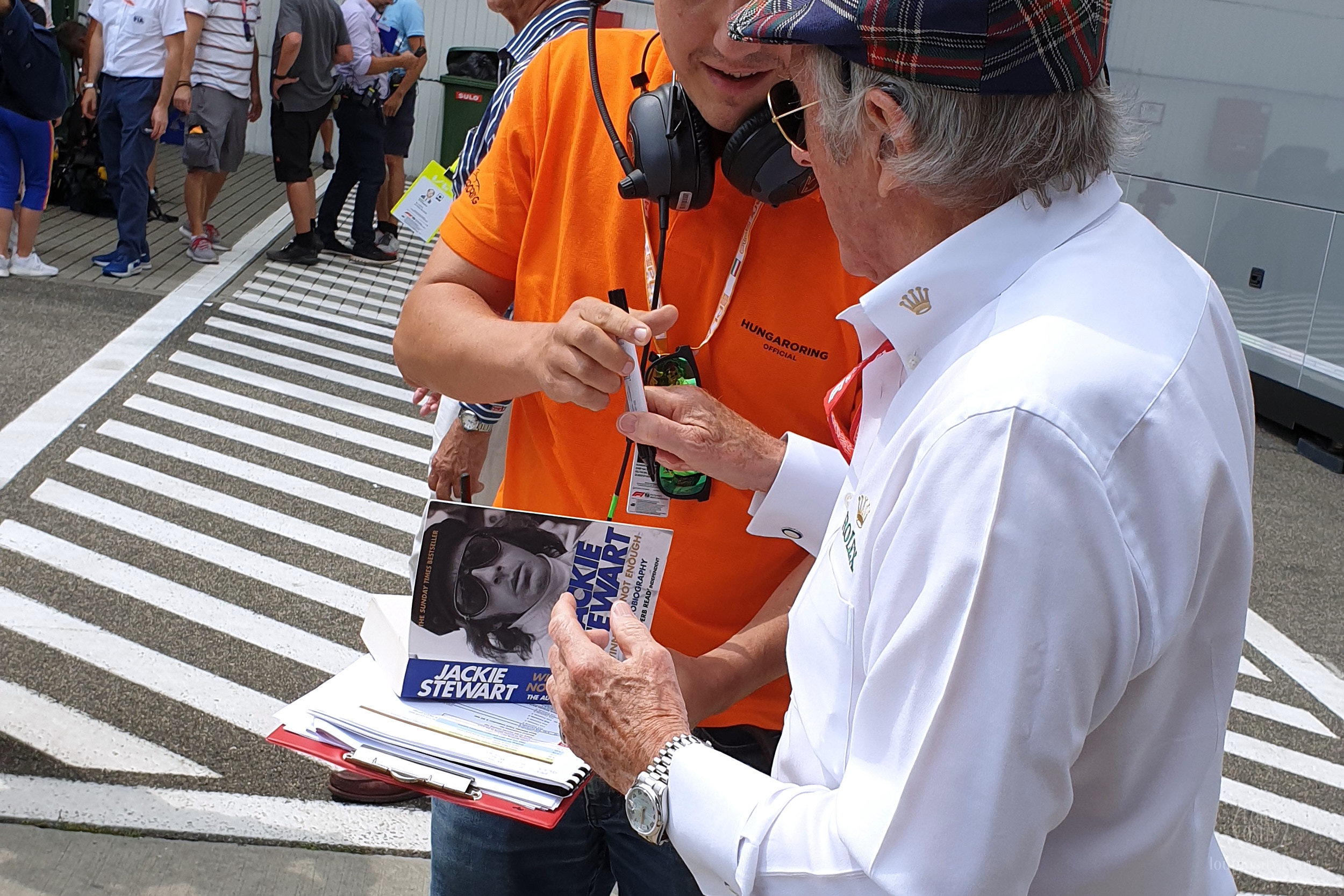 The Scotsman has been also using the attention he captures to raise funds for the race against dementia, a condition his family has been impacted by lately. In 1962 he married childhood sweetheart Helen McGregor. The woman who once kept Jackie on the top is now confronted by a disorder, currently with no cure.

‘There are 50 million people suffering from it – one in every three people born today will have dementia. Within 10 days of a grand-prix, teams introduce 6 major changes in the car, because they are desperate to win. We are desperate to win. And in the race against dementia we have got to do it at a different speed than we have done it before.’

Race Against Dementia has been founded by Sir Jackie and Lady Helen to find a breakthrough in the prevention or treatment of the disease. Their goal is to discover the biggest scientific talents and catalyse their research by the innovative thinking and technologies of Formula 1. Additionally, Sir Jackie has been actively raising funds to enable the disruptive thinking.

F1 Paddock Club with Rolex I enjoyed the buzz of the pre-holiday Formula 1 Hungarian GP weekend in the Rolex lounge - the brand is the Global Partner and Official Timepiece of Formula 1 since 2013.Rolex Fastnet Race & SailGP at Cowes Rolex has been involved in yachting for over 60 years. SailGP and Rolex Fastnet Race in Cowes is coming up in August, where the 2019 Yacht-Master 42 will be a common face to meet.Rolex at Baselworld 2019 Standing tall at its signature Baselworld spot Rolex brought exactly what the company is a master of: consistency. No ground-breaking novelties this year, instead fine tweaks in shapes and details characterise the 2019 portfolio.