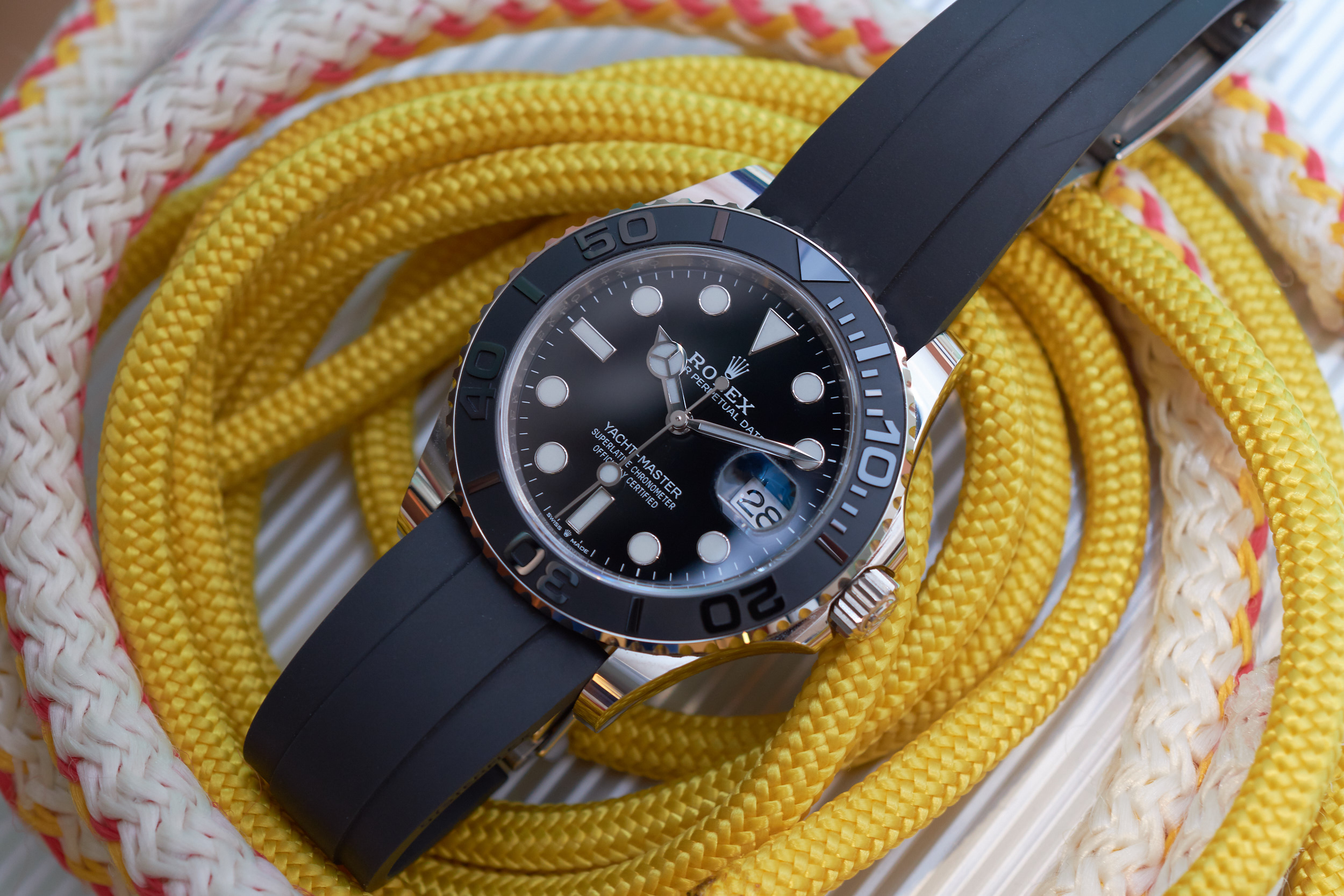 Sailing fans from all over the world flock to the small town of Cowes in the Isle of Wight for the August yachting week. The dwelling with 10,000 souls doubles in population during the racing events. The Rolex Fastnet Race, one of the most important biannual offshore sailing competitions, will take place between 3-8 August and the super modern F50 catamarans of SailGP will foil in the Solent one week later. The lush green terrain will naturally accommodate the green-gold Rolex logo throughout the event. The company which celebrated the sixth decade of participation in yachting last year is the Title Sponsor of Rolex Fastnet Race and Presenting Partner and Official Timepiece of the SailGP.

Rolex entered yachting in 1958 when they formed a lasting partnership with the New York Yacht Club. Founded in 1844, the NYYC held the America’s Cup trophy between 1857 (when the syndicate that won the cup donated the trophy to the club) until 1983 (when for the first time out of 25 trials it was defeated by Australia II of the Royal Perth Yacht Club). In the ‘80s, Rolex extended its cooperation to clubs on European waters, namely the Royal Yacht Squadron, UK in 1980 and the Yacht Club Costa Smeralda in Porto Cervo, Sardinia in 1984. In the past two decades relationships with other clubs in the Mediterranean were established such as with the Royal Malta Yacht Club, the Société Nautique de Saint-Tropez, Yacht Club Italiano, Yacht Club de Monaco and the Royal Hong Kong Yacht Club in Asia. 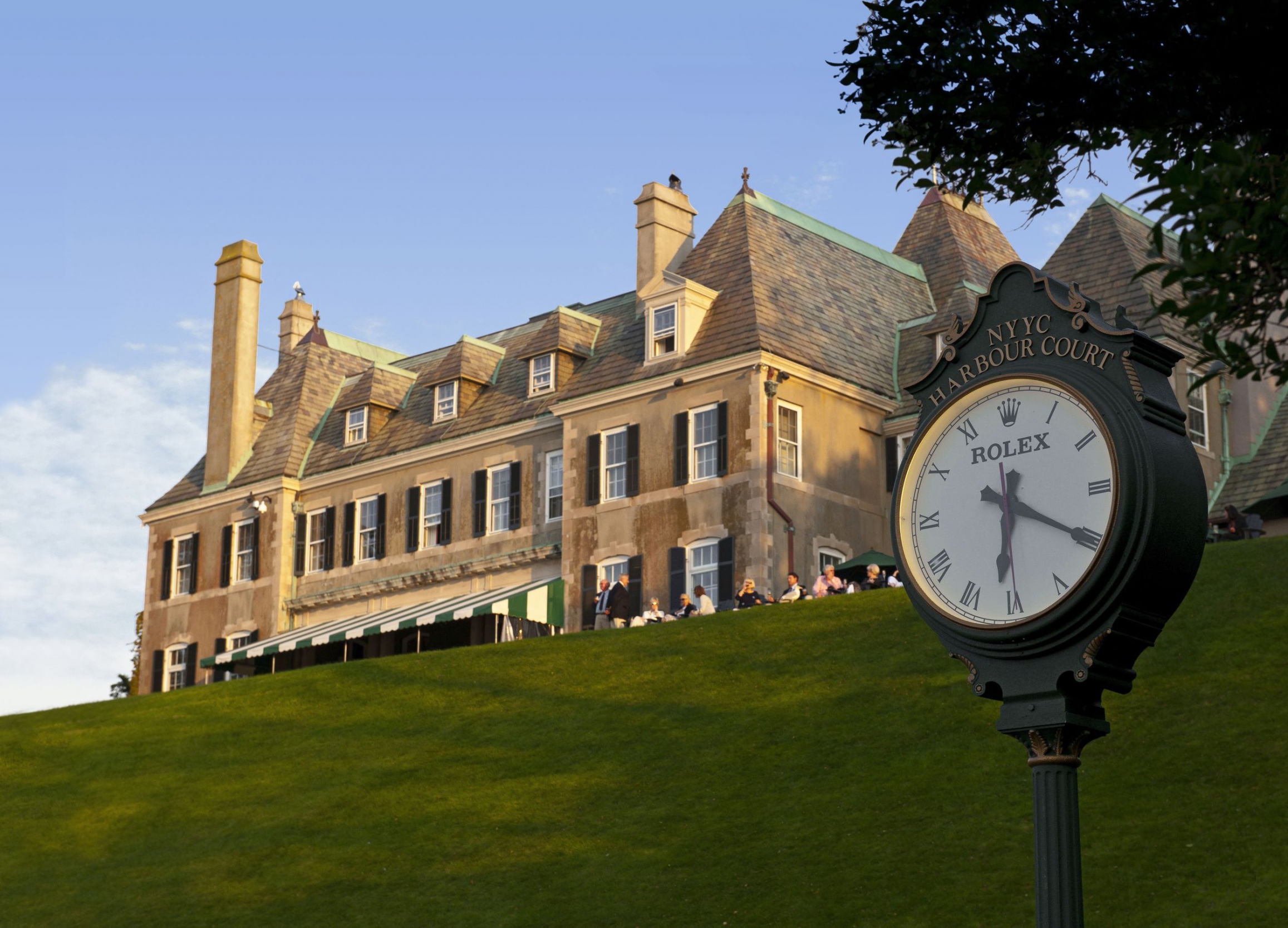 Clubs have been holding challenges to showcase the excellence and technical superiority of their members. One of the oldest regattas is the Cowes Week that has been held by the RYS since 1826. It fostered famous contestants and even inspired artists like Joseph Mallord William Turner famous for his expressive and violent marine paintings. He depicted the ships mooring in the firth of the River Medina in 1827.

Beyond clubs Rolex sponsors individual races too; two of them will take place before and during the Coves Week in the first half of August.

The Cowes Week is not just historic, but it is still one of the most important gatherings for yachting that lines up boats of all classes from traditional to high-tech. For the first time ever, the highly anticipated biannual Rolex Fastnet Race organised by the Royal Ocean Racing Club since 1925 will be held before the Cowes Week. The RORC was founded in London ‘to encourage long distance yacht racing and the design, building and navigation of sailing vessels in which speed and seaworthiness are combined’. 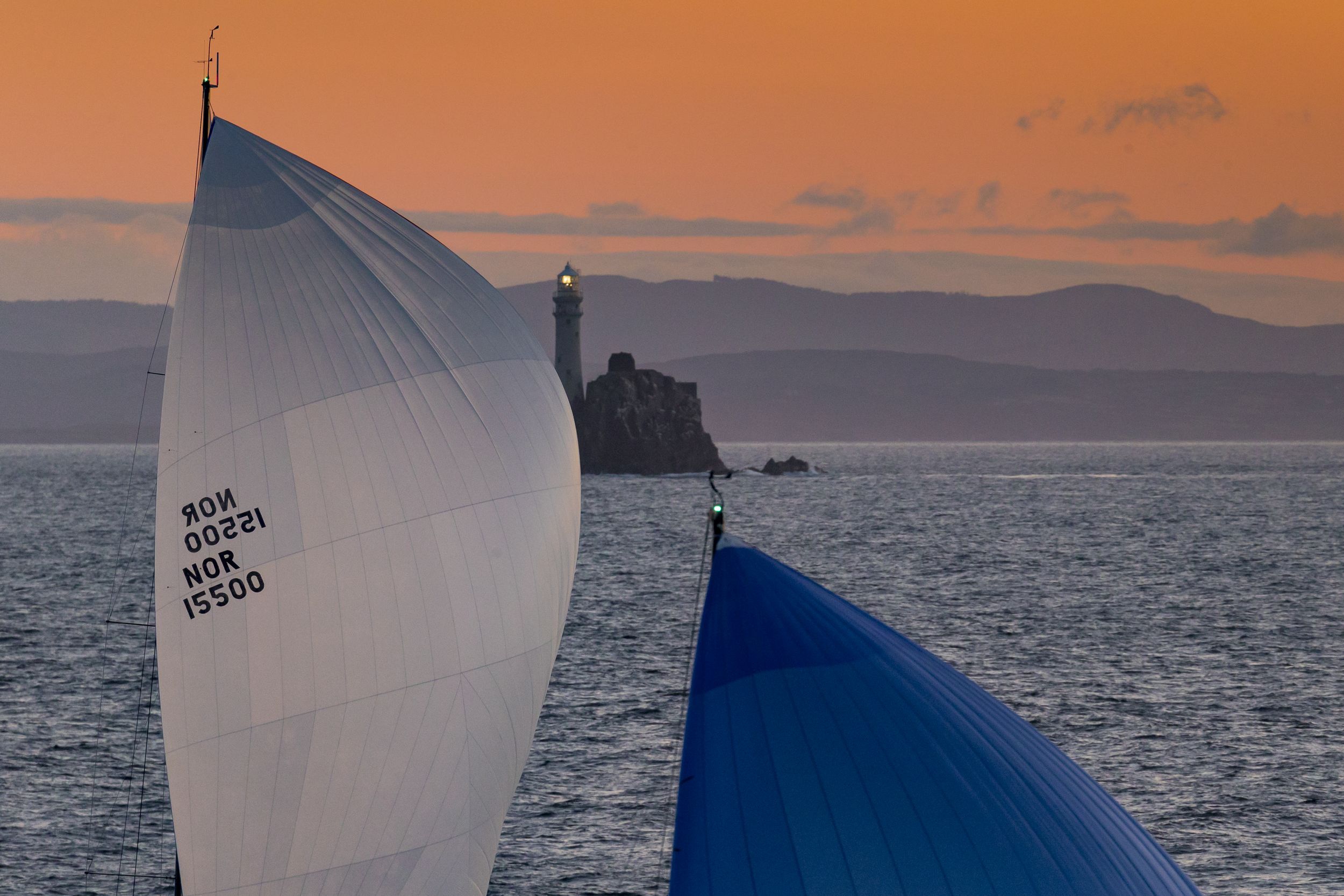 The popularity of the Rolex Fastnet Race is well demonstrated by the fact that for the 48th edition (3-8 August 2019), registrations for the 340 IRC boat places came within 4 minutes and 37 seconds after the online registration opened – only 13 seconds later than the record set in 2017.  The line up includes 340 IRC yachts in 5 classes and monohulls such as 25 Class 40s and 27 IMOCA 60s among others. 3, 100ft Ultime trimarans, capable of flying at over 35+ knots – weather conditions permitting-, will also line up at the start.

IRC is a rating rule to handicap different designs of keelboats allowing them to race together. Class 40s are high-performance racing boats, designed principally for single-handed or small crew offshore competitions. The IMOCA 60s are used in the single-handed non-stop around the world race, the Vendée Globe.

The record fleet of around 400 boats and over 3,000 crew are sailing the 605 nautical miles (1,120 km) non-stop. The leg across the Celtic Sea to (and from) the Fastnet Rock is known to be unpredictable and challenging. The competitors are exposed to fast moving Atlantic weather systems and the fleet often encounter tough conditions, which in 1979 tragically cost eighteen lives and only one-third of the boats finished the race.

The crew includes professionals and amateurs and even boats supporting special causes. The French Libertalia Team Jolokia is campaigning for diversity by having the 12 crew chosen from different slices of society: ‘Whether beginner or certified skipper, disabled person, female senior citizen or foreign national, everyone has the chance to embark on this great human adventure,’ says Marion Pennaneac’h, the team’s Communication and Project Manager. The most high profile Sam Davies’ IMOCA 60 Initiatives Coeur raises attention and money for Mécénat Chirurgie Cardiaque, a humanitarian organisation that helps children suffering from heart defects. Charity Ausome-Lyra of London gives the opportunity for nine autistic people to compete on-board of a Swan 431. 10% of the crew are women, which doubled in the past 20 years. 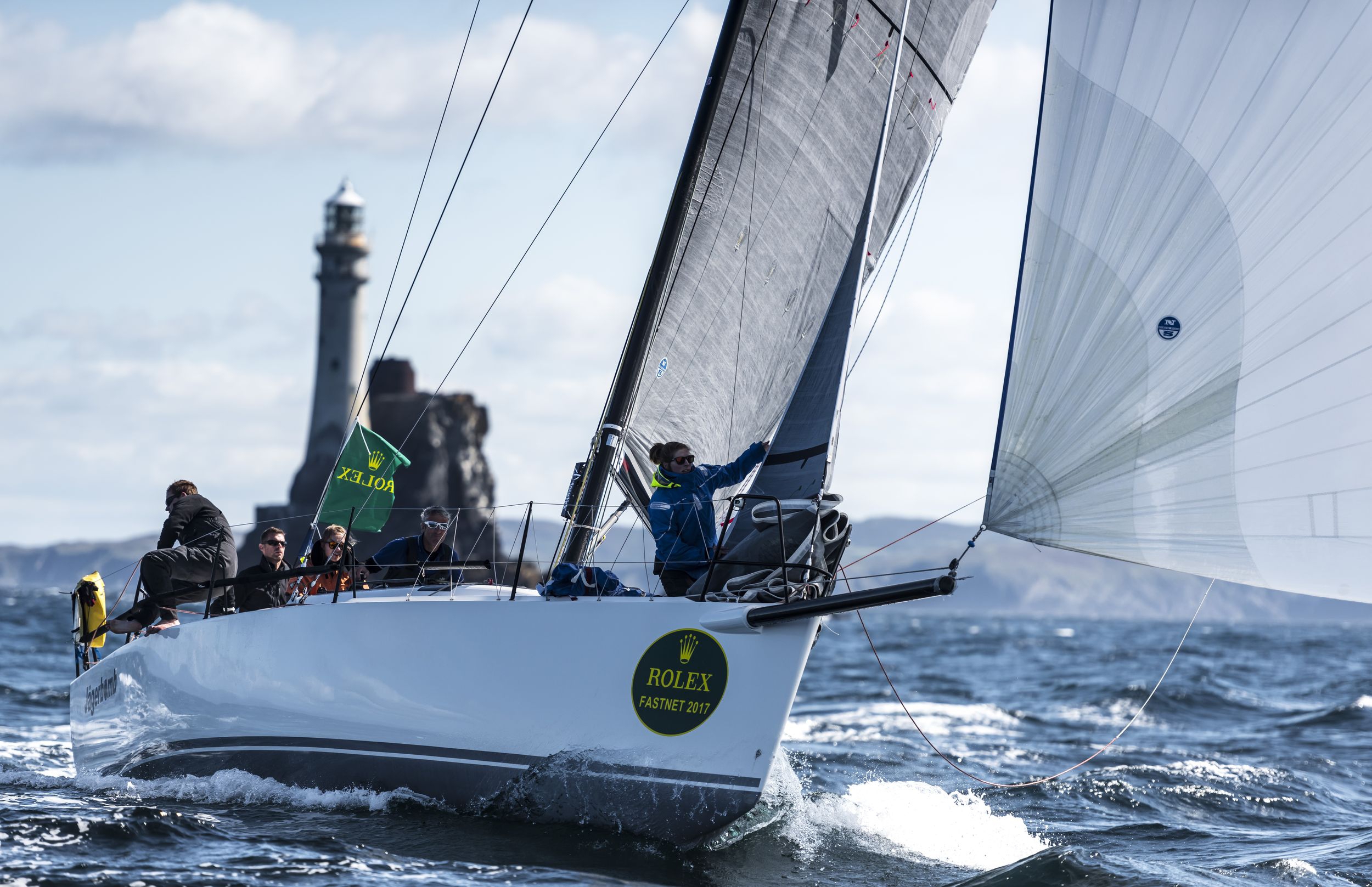 Rolex has been sponsoring the Fastnet Race since 2001, and awarding a special watch to the Cup winner and another to the line honours monohull winner have been customary.

Tapping into the top on-water speed and entertainment Rolex announced its partnership with the new-born SailGP series in February 2019. F50 wingsailed catamarans, the world’s fastest race boats will clash in the designated track in the Solent just off the Medina firth North-West. These light, technical boats are capable of hydrofoiling at speeds of 50 knots (92 km/h) and they’re identical for all the 6 teams participating. 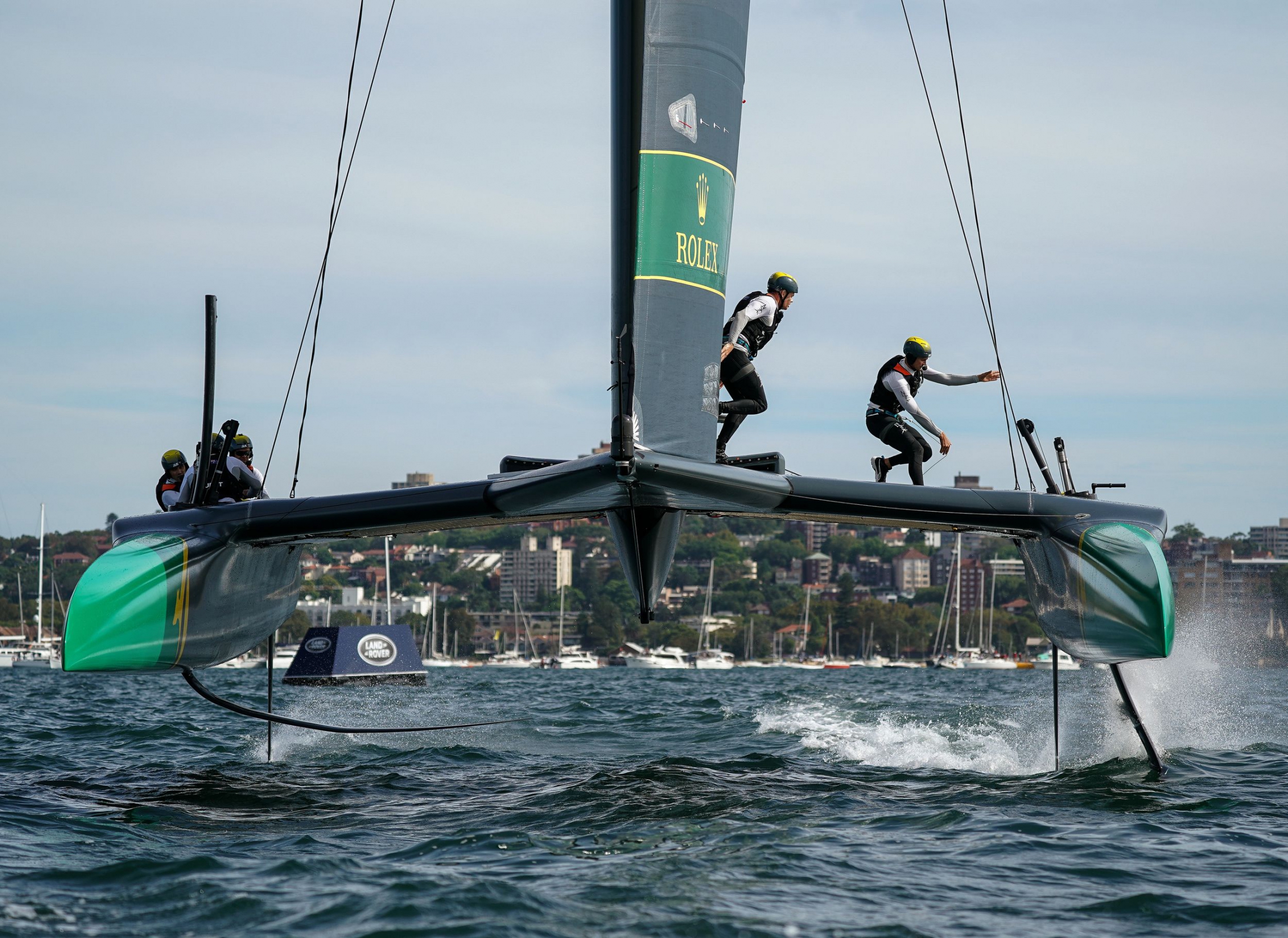 The SailGP was founded last year and launched the initial season in 2019. The season contains five racing weekends in famous harbours or straits such Sydney (15-16 February), San Francisco (4-5 May), New York (21-23 June), the Solent at Cowes (10-11 August) and Marseilles (20-22 September). The series will be extended by one location per year over the next five years. It has a novel format aiming to provide a condensed thrill for online streamers. Races will take place on both days of the weekend: three 16-minute fleet races on Day 1 and two fleet races and one 10-minute match race between the two highest ranked from the weekend on Day 2. 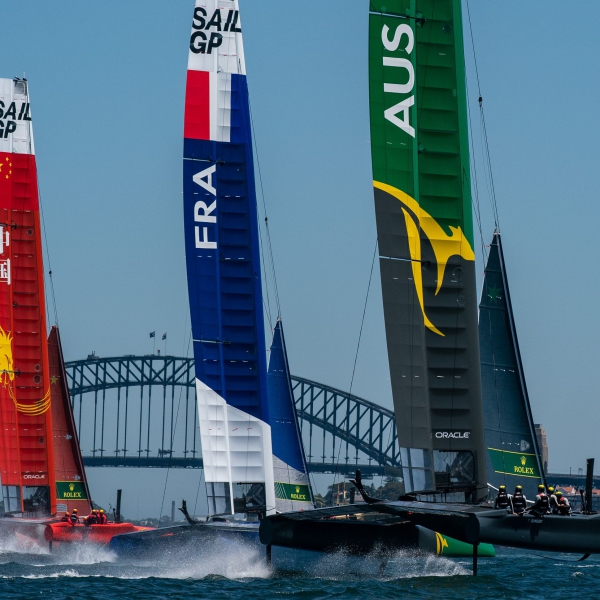 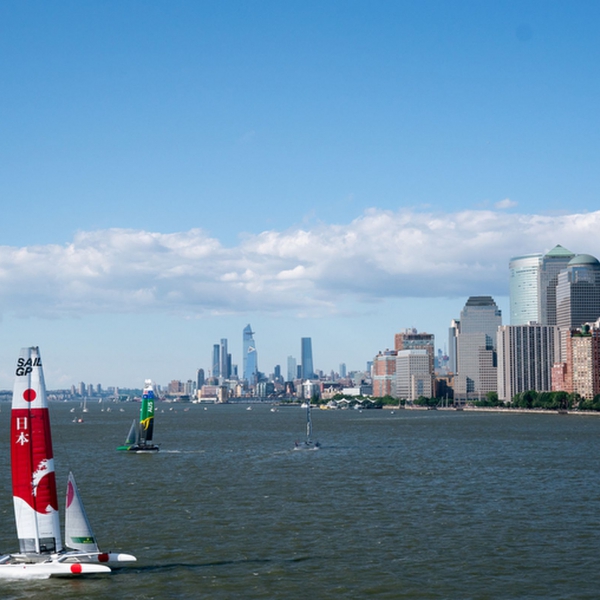 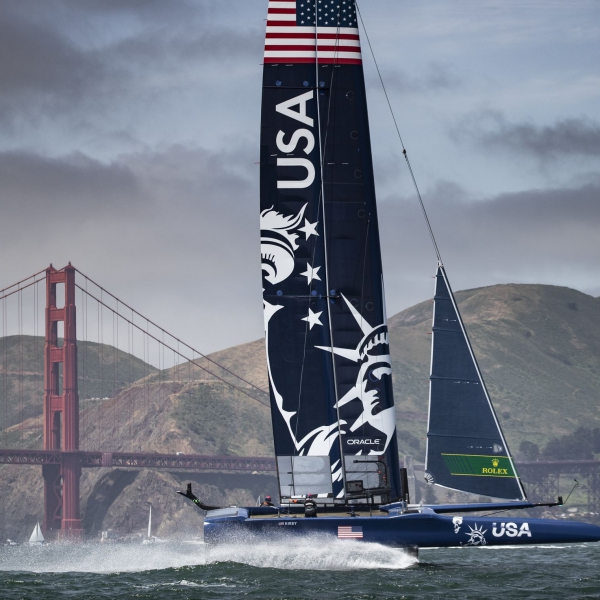 Boats are equipped with 1,200 sensors fuelling the broadcasts with imaging and telemetry from all possible angles, providing unprecedented live on-board entertainment for viewers over the Internet and at the race locations.

The GP kicked off with 6 national teams with 5 athletes on-board each: USA, Great Britain, China, Japan, France and Australia. In season one, China and Japan have been designated as developing teams, and started with a 40% nationality requirement, which will increase by 20% annually. The plan is to add one more team each season over the next four years.

Behind the SailGP is Oracle founder Larry Ellison, who has made a commitment to underwrite its first 5 seasons with a budget of USD 7m / season for each team. His financial commitments also extend to the central services all teams receive, which include design, shore logistics, boats and equipment transportation and other business services.

Rolex is associated not only with races and clubs, but with people who have stood out in their dedication and performance as individuals and team players.

Some sportsmen in the SailGP have already received the World Sailor of the Year Award sponsored by Rolex. The only woman in the series is Marie Riou of the France SailGP Team who is the current holder of the prize, which was previously won by Tom Slingsby (AUS, 2010) and Sir Russell Coutts, five times America’s Cup winner and CEO of SailGP (NZ, 1995, 2003).

Earlier in 2019, one of the most well-known sailors, the British Sir Ben Ainslie also became a Rolex Testimonee. Aged 19, he won a silver Olympic medal in Atlanta in 1996, followed by four gold medals in Sydney (2000), Athens (2004), Beijing (2008) and in London (2012). He is the nine-time European and eleven-time World Champion and with an astonishing comeback in the 2013 34th America’s Cup he claimed the win as the member of team OTUSA.

Rolex Yachtsman of the Year in 1998 and Rolex Testimonee since 2000, the American Paul Cayard has had an amazing sailing career spanning over 30 years. He has won seven world championships, and participated twice in the Olympic Games and seven times in the America’s Cup. In 2002 he was elected into the Sailing World Hall of Fame.

Brazilian sailor Robert Scheidt is one of the most successful Olympic racing sailors, having won two gold, two silver and one bronze medals in five Olympics. He is also 13-time world champion in the Laser and Star classes. He was named World Sailing’s Rolex World Sailor of the Year in 2001 and in 2004. Robert Scheidt has been a Rolex Testimonee since 2009.

Until the Rolex Yacht-Master appeared in 1992, Submariner models had been positioned for sailors.

The Yacht-Master came out in 1992 with a rounded 40mm Oyster case to avoid snagging rigging or sails. In 2015, Rolex presented the Oysterflex bracelet (on a 37mm model), which is composed of two flexible metal blades – one for each bracelet section – over-moulded with high-performance black elastomer. At the 2019 Baselworld the company introduced a 42mm version with the new generation Calibre 3235. The new model arrived to Petite Genève recently.

The Yacht-Master II is a regatta chronograph with a programmable countdown function. Racing contestants are able to set the countdown according to the particular start sequence of the regatta. It is done by rotating the bezel 90 degrees and setting the countdown timer with the crown. At the starting gun, the skipper can start the countdown. When the preparatory signal is given at e.g. 5 minutes before the start, the countdown seconds can be synchronised on-the-fly by the pusher at 4 o’clock, if needed. The function is provided by the novel complication in Calibre 4161, which is based on the chronograph calibre 4130 developed in 2000 for the Cosmograph Daytona. 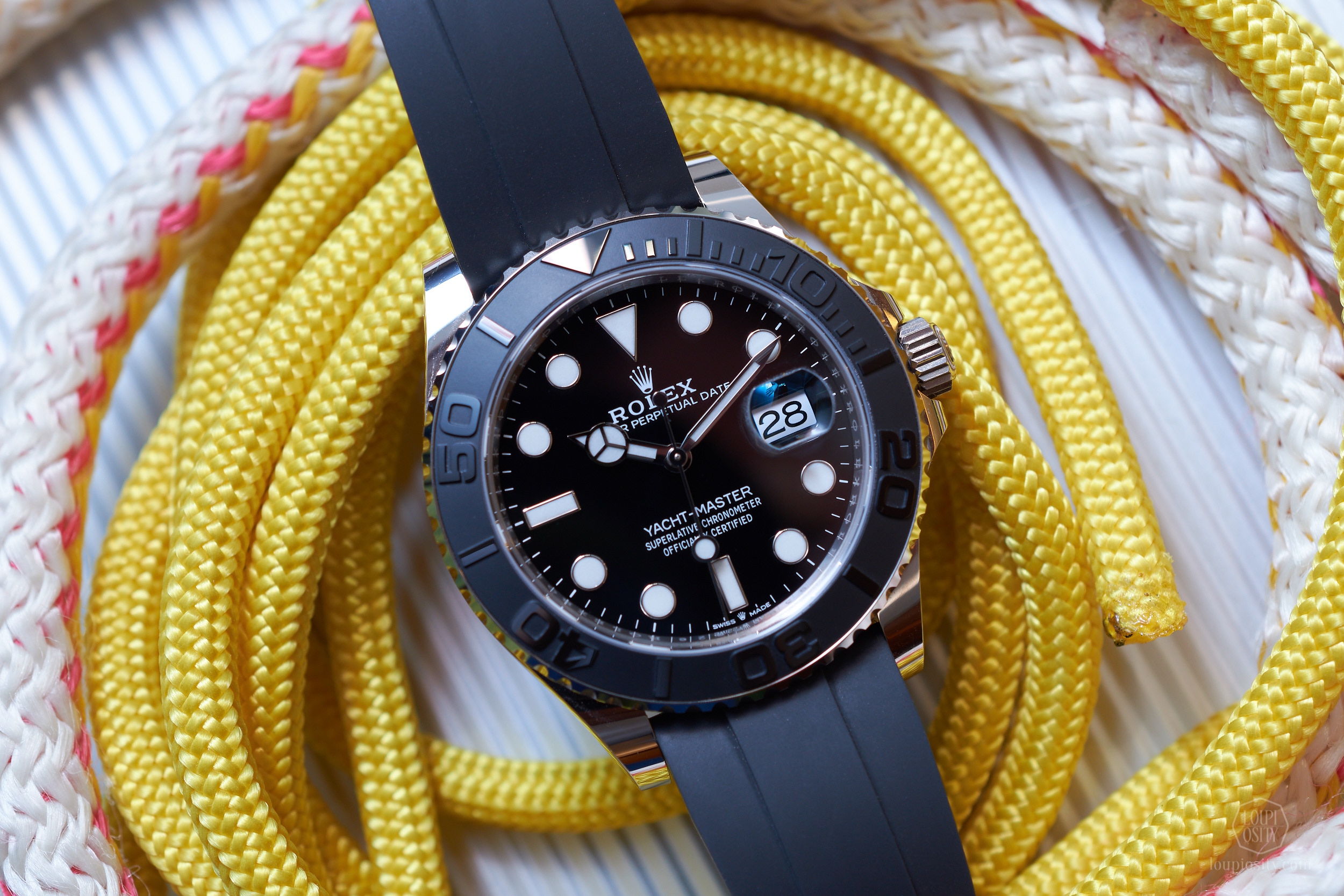 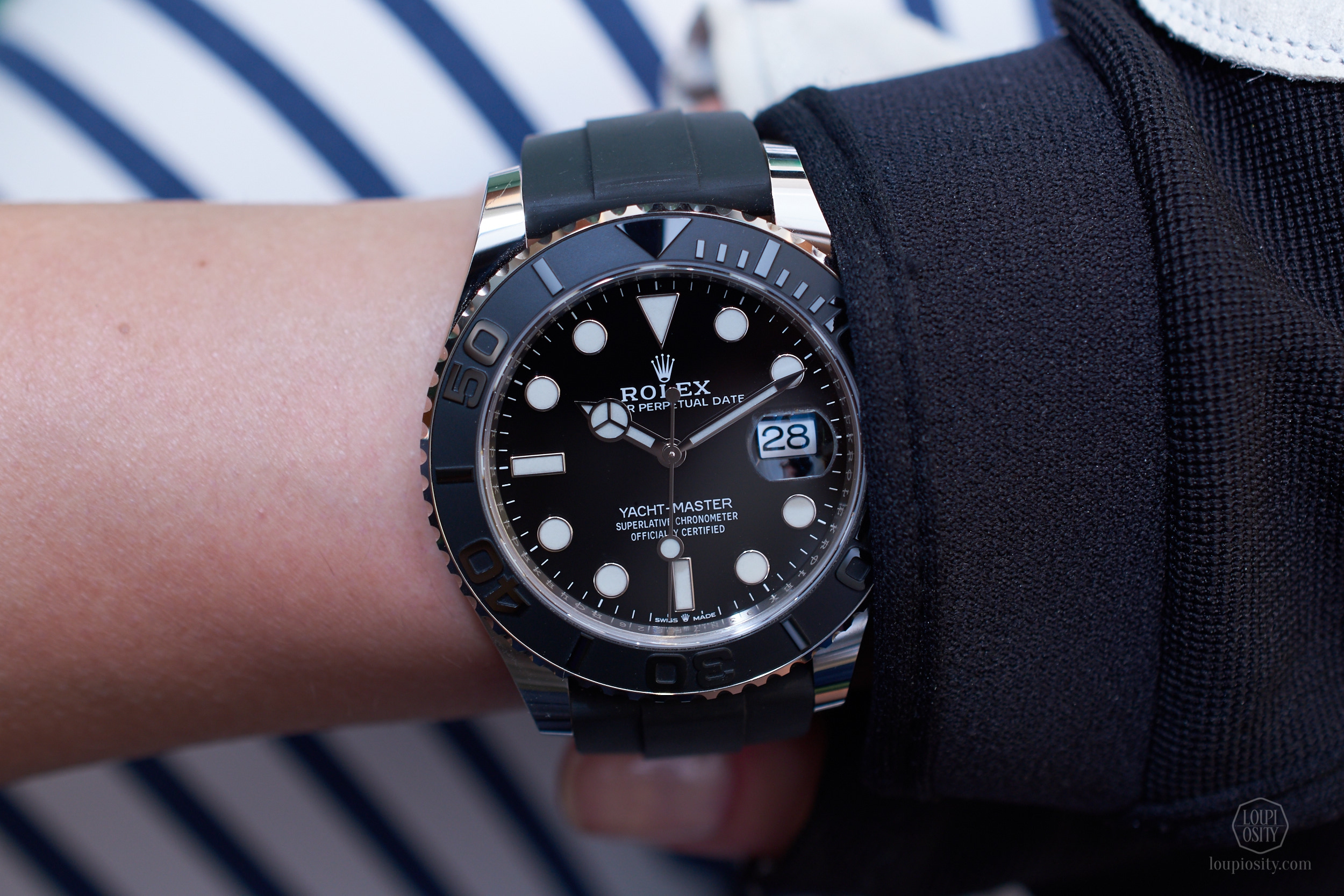 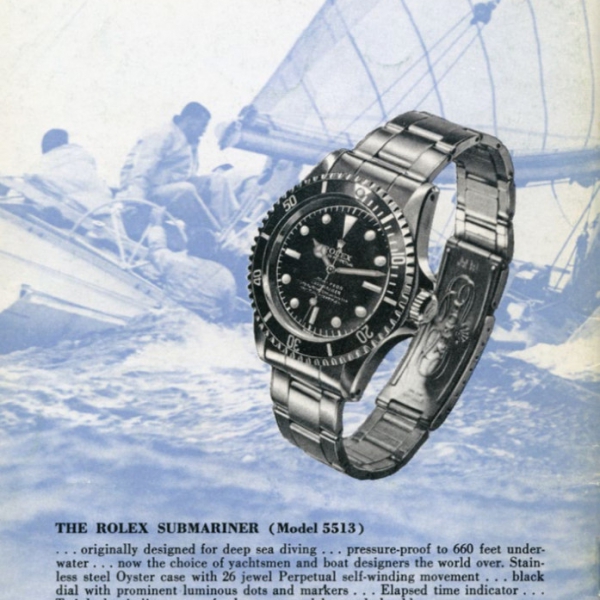 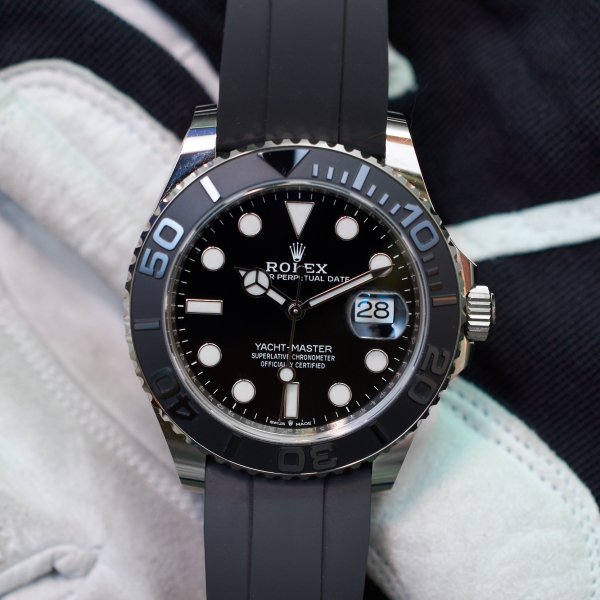 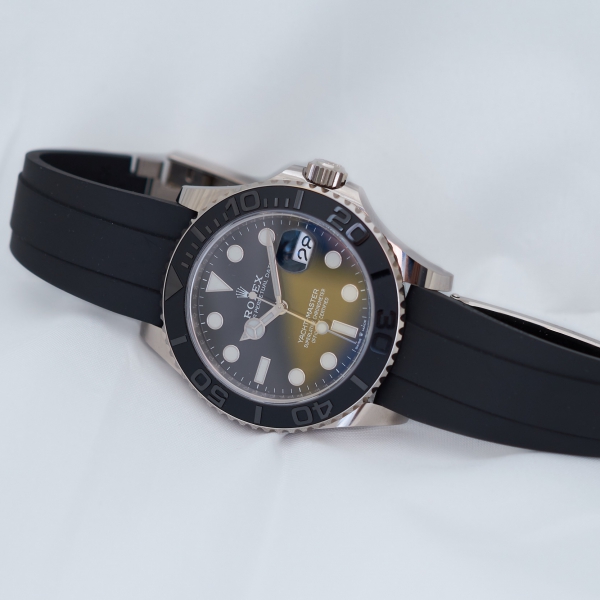 The Ocean Race x Ulysse Nardin In addition to its role as 'Official Timing Partner', Ulysse Nardin is also the 'Time to Act Partner' of The Ocean Race, committed to the responsible use and conservation of the world’s oceans.Audemars Piguet at the Dubai Watch Week 2021 Audemars Piguet took part in the 5th edition of the Dubai Watch Week from 24 to 28 November 2021 at the Gate in the Dubai International Financial Centre with a booth and exhibition space, dedicated mainly to the Royal Oak Offshore.Dubai Watch Week 2021 In the very long months of the pandemic - as any other sector - the luxury industry and the watch brands have been coping with virtual presentations and online product launches. Of course everyone is keen to return to the live events, real personal discussions and not-on-the-Zoom connections. The Dubai Watch Week welcomed a great number of visitors in the sunny…