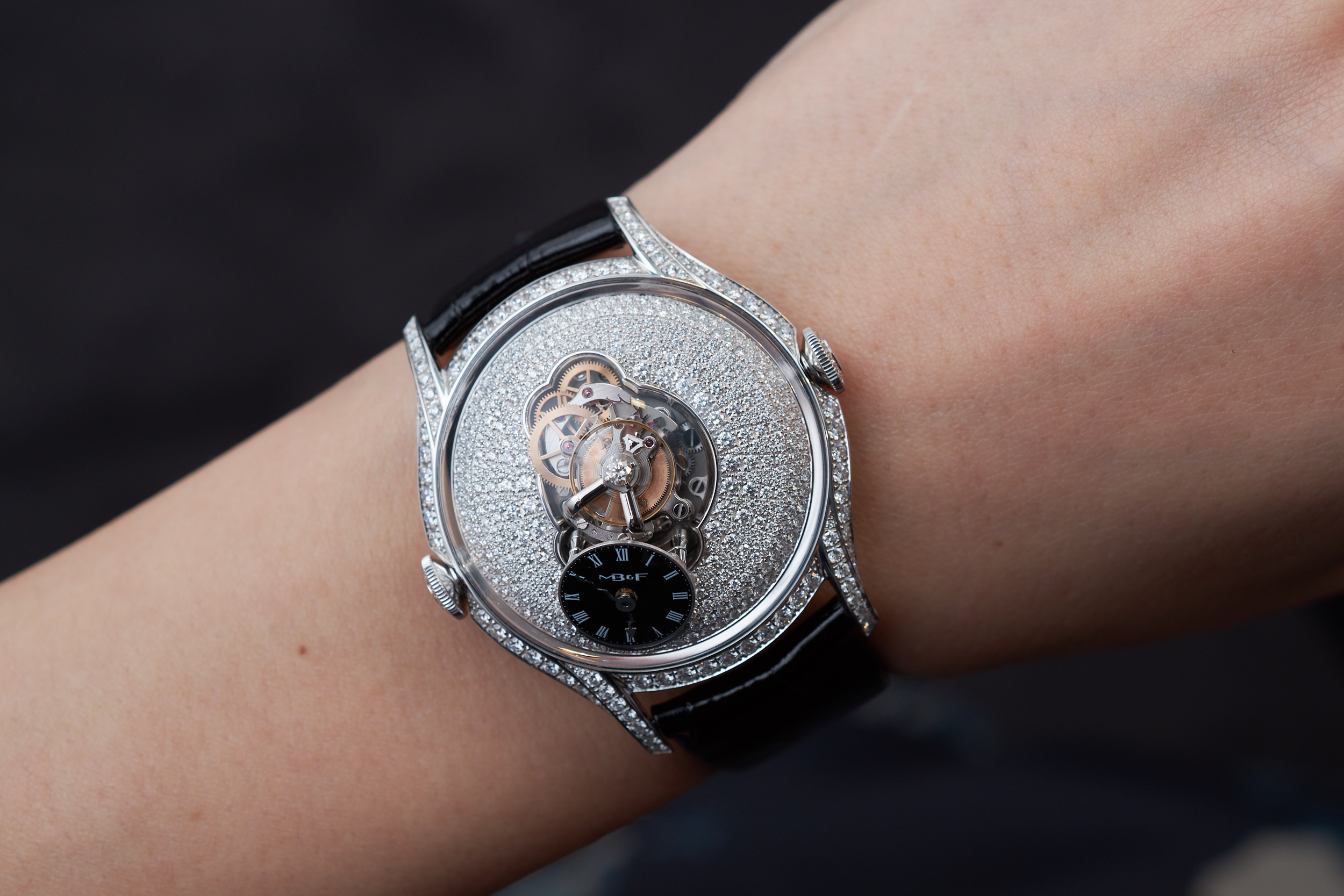 In this series we showcase mechanical and artistic wonders that were especially designed for women and others originally for men that come alive on spirited ladies’ wrists. 2019 brought new options for women demanding artistic and technical excellence in a timepiece. I selected a few from those presented at Baselworld.

At shows such as the SIHH or Baselworld I normally get a healthy overdose of timepieces. Being a very visual person my brain combines watches immediately with real and imaginary wardrobes like some sort of augmented reality – and that is exhausting. When the curtain comes down, it takes some time to digest what I’ve seen. This chapter is dedicated to Baselworld novelties.

Jacques Helleu (1938-2007) joined the house of Chanel at the age of eighteen. In 1965 he took over the responsibility for promotion and later served as the artistic director. He was behind the house’s iconic ads and visuals. As Maureen Chiquet, Chanel’s former CEO put it…‘His larger-than-life personality, immense talents and unique vision have defined Chanel as the ultimate house of luxury, with an unparalleled global presence.’

Inspired by two of his passions automobiles and sailing, he decided to create a watch. He admired the chassis lines of racing cars and the regal silhouettes of the America’s Cup racing J-class yacht. The latter became the eponym for the J12 watch. Although he designed it for himself the J12 has been super successful in ladies’ circles.

The J12 has also been the model Chanel selected for producing in high-tech ceramic. Back in 2000 when the black edition and later in 2003 when the white emerged, ceramic was barely used in watchmaking, at least not to this extent. The fashion company brought this material in vogue and has kept it in production ever since. J12 has seen many variations, colours, surface treatments and one-off editions.

Such an icon is not easy to develop further. Arnaud Chastaingt, director of the Chanel Watchmaking Creation Studio gave the J12 a makeover by preserving the identity that has built its success. He refined the bezel and redesigned the numerals that are now also in ceramic. The indexes and the inner railway were also touched. The hands have the same width and both are filled with Super-LumiNova – black on the black J12 and white on the white J12. 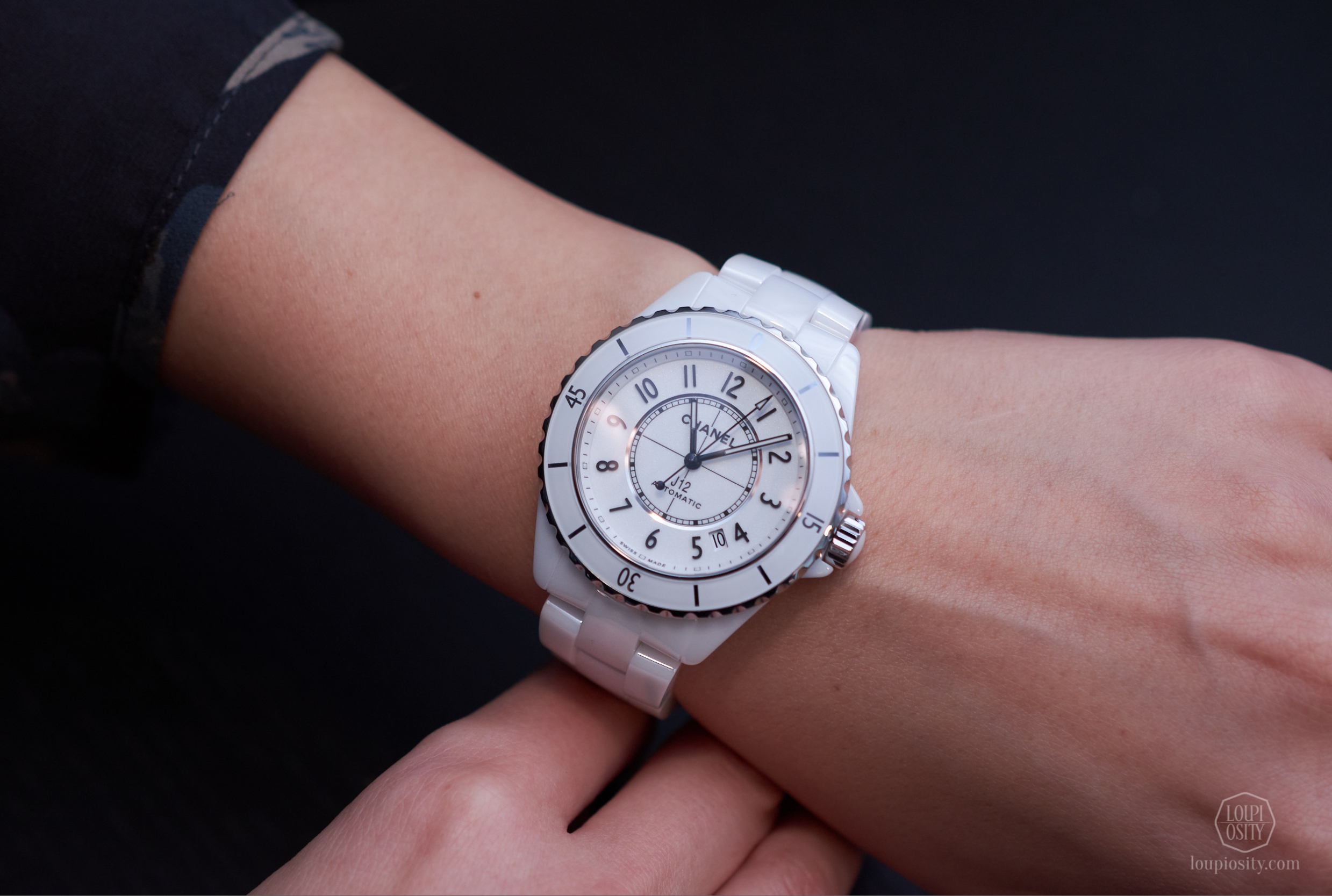 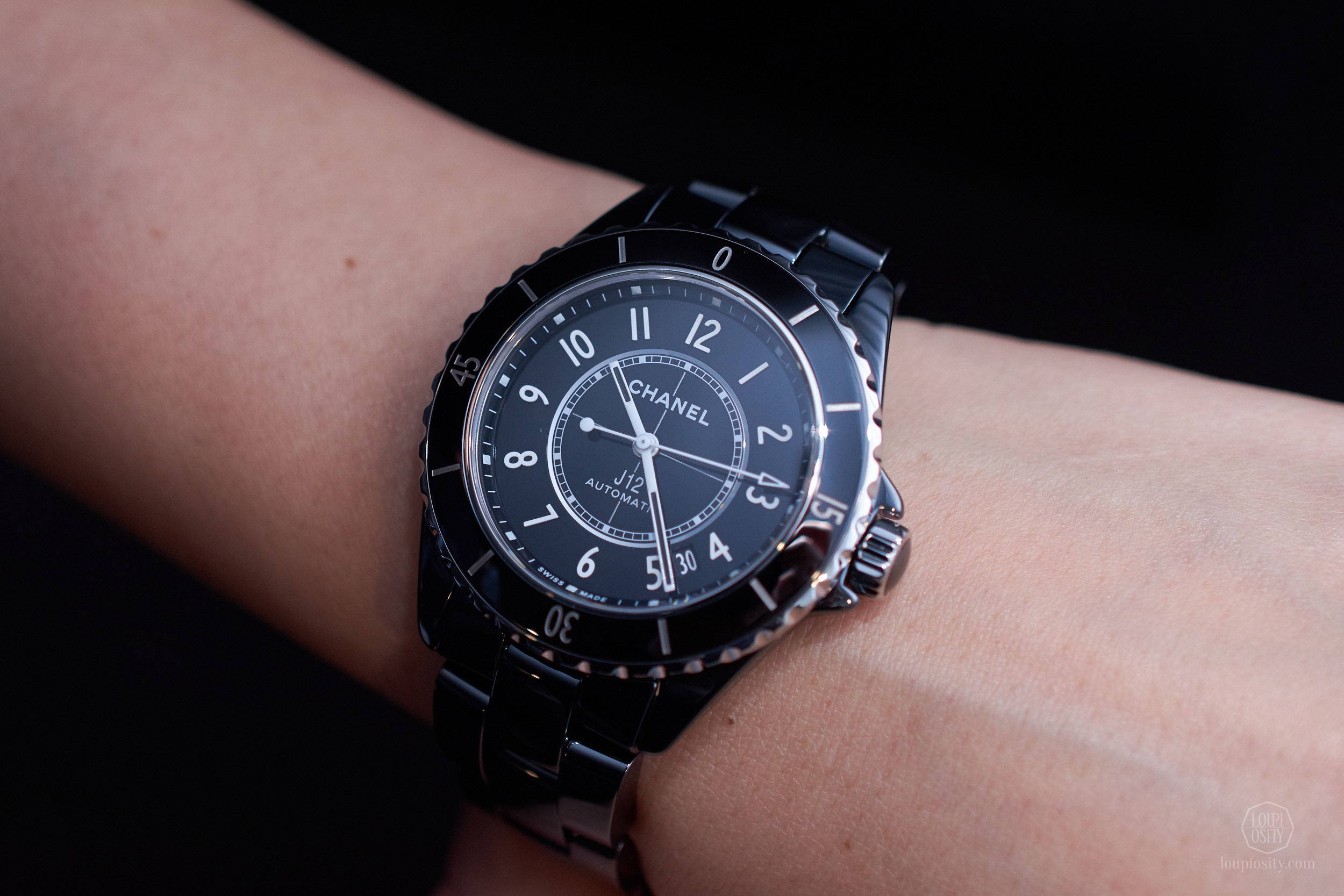 The case is made of a single piece of ceramic letting a glimpse to the new automatic calibre 12.1 through a sapphire crystal back. The movement is developed by Swiss watch parts maker Kenissi, the fashion house has acquired a 20% share of in late 2018.

Chanel has been investing in its watchmaking production lines. Having worked on various models with Romain Gauthier, the company bought 20% of Montre Journe in mid-2018. Kenissi will move from Geneva into a new building in La Locle in 2021 which co-hosts the production lines of Tudor too.

The watch is light and sits perfectly on the wrist with its soft and rounded profile.

Earlier in January I was one of those listening intently to Max Büsser, looking back over his 14 years of on-going adventure with MB&F at the SIHH Auditorium. He is among the rare birds in this industry who can express themselves through shapes and words with ease. The fans of his genuine ‘horological machines’ reach well beyond those who can afford it. For his intellectual style any audience even outside the sector goes along with his stories as long as they roll (check out the replay from January here). It was interesting to hear about how the expectations (his and those of the market) have urged him to constantly discover his limitations.

In Basel Mr Büsser shared another such experience. He has always designed watches he would love to wear. Being surrounded by women in the family at one point he felt that it’s time to step outside from the comfort zone and design a watch for women. ‘And then I realised that I have no idea what a woman wants. So it was a big deal to create something that way. Finally, what really made it, was that I stopped thinking what they would they like, and I projected on this piece what I love in the women of my life […] energy and elegance.’ 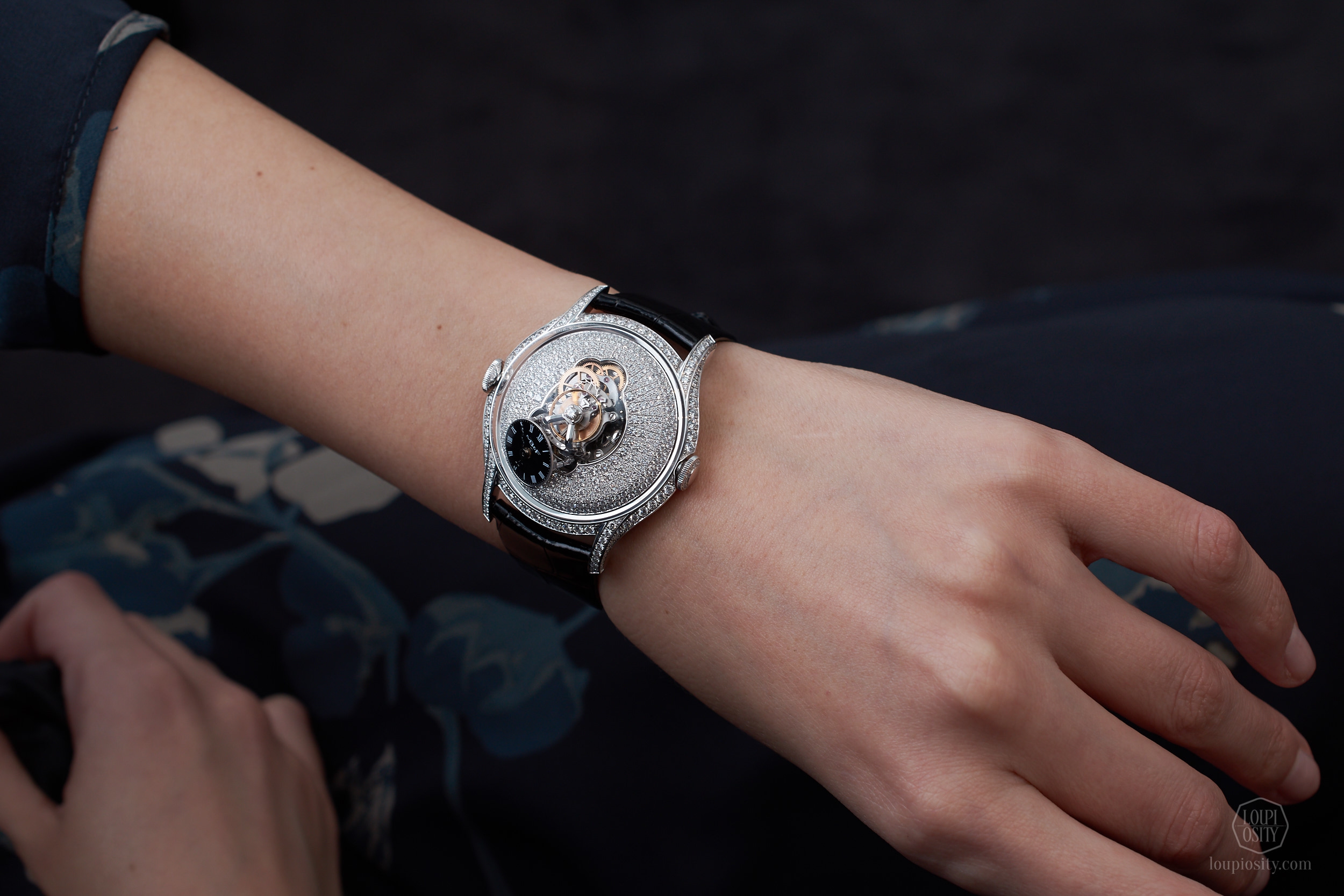 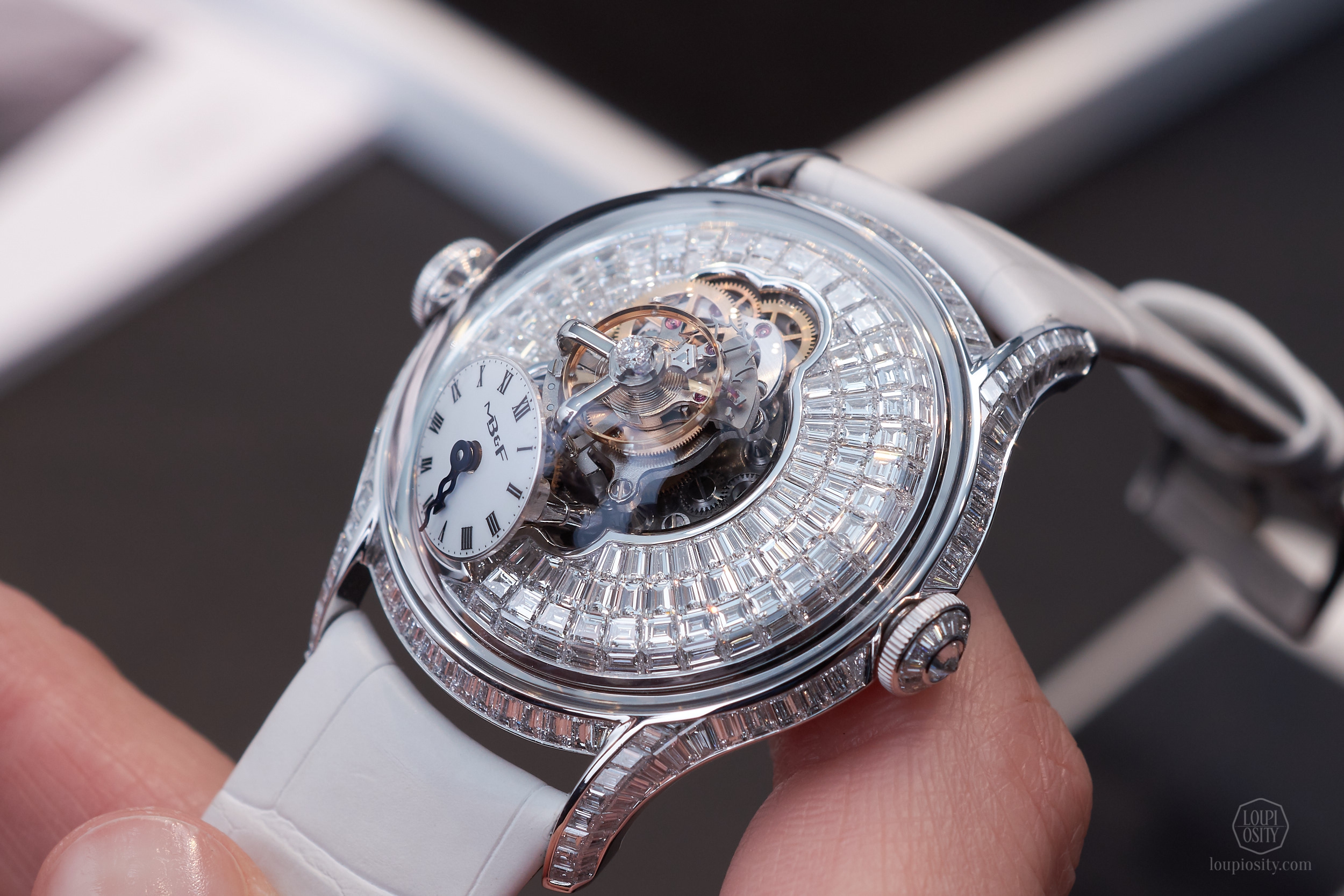 My surprise was great and my sigh was honest upon seeing the piece at last. It looks like the last treasured ‘legacy machine’ of humankind got encapsulated under a sacred crystal dome. The co-axially built machine elevates from the diamond or black lacquer pond (depending on the edition) with a flying tourbillon at the top with nothing to cast shadow on it. Even the dial stands aside inclined at 50 degrees facing the wearer. If feels as if it’s counting your time, only in full privacy.

All the three editions are set with diamonds. ‘We had a lot of debate internally whether we should have them with diamonds or without diamonds.’ – he adds. ‘We are putting it with diamonds because we say that this is the first woman’s dedicated MB&F. We didn’t want to hear any idea saying that oh, this is a unisex watch. I wanted it to be a declaration.’ 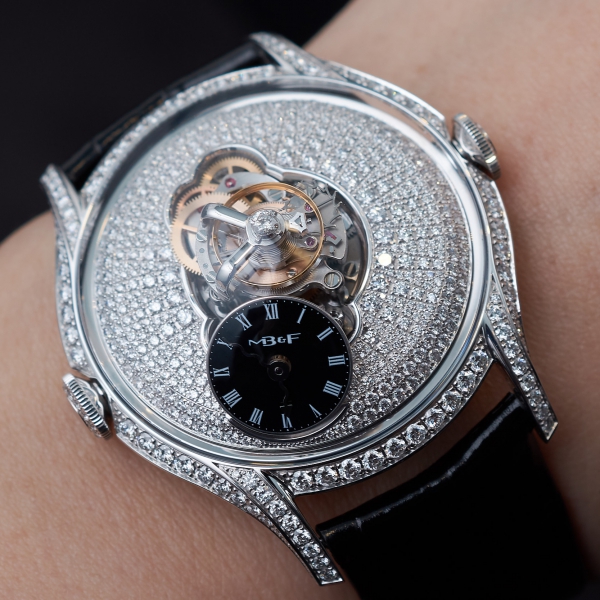 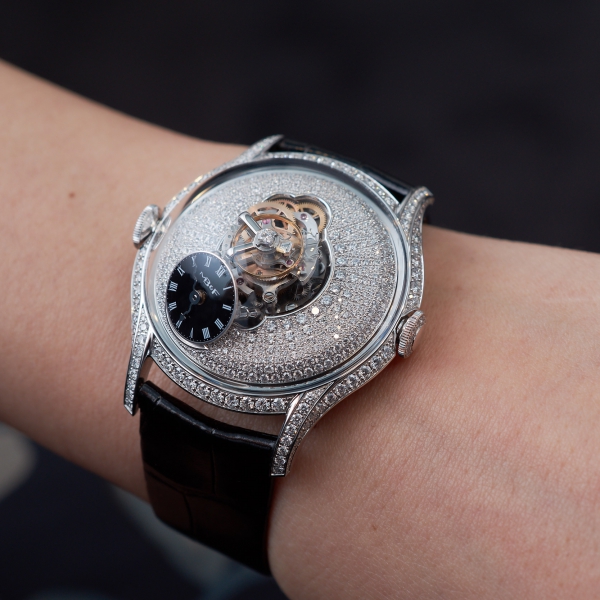 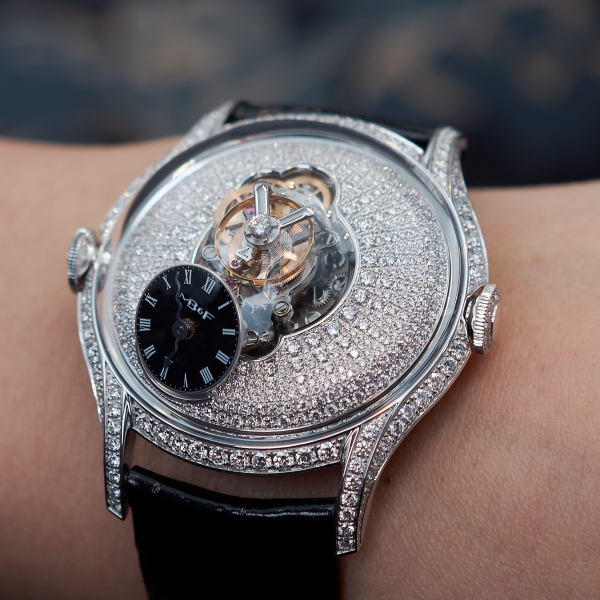 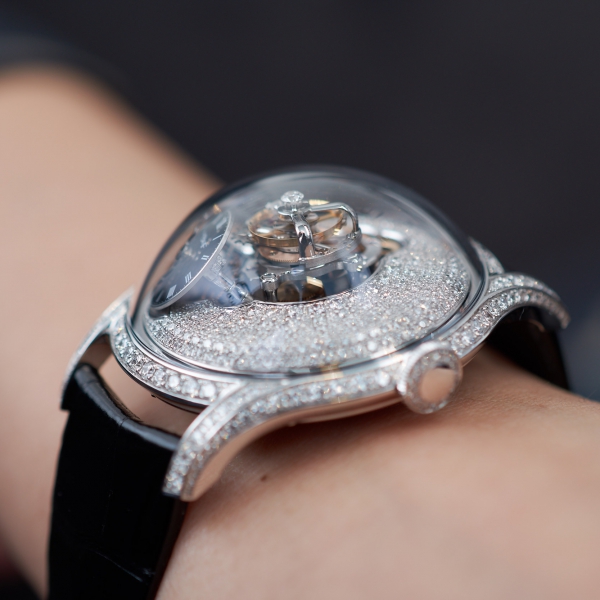 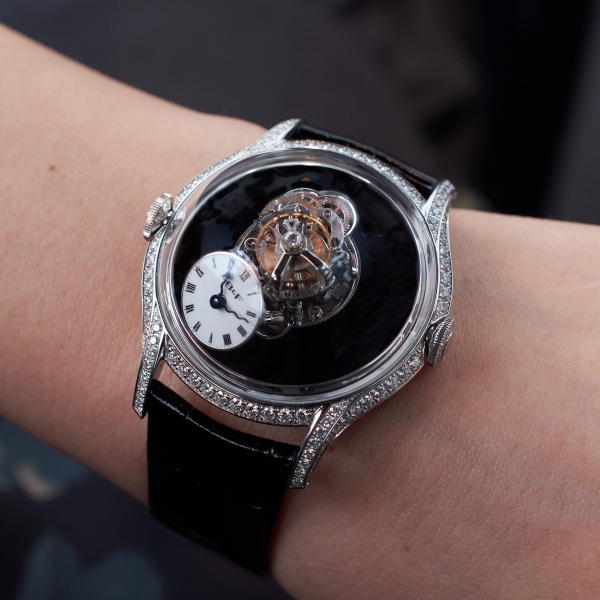 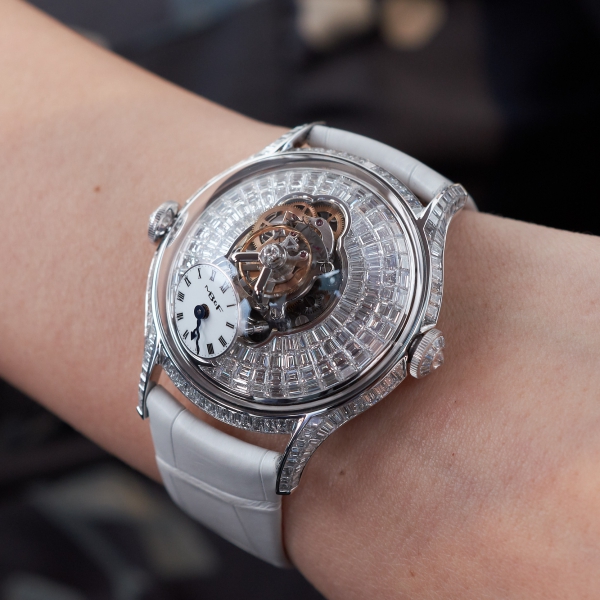 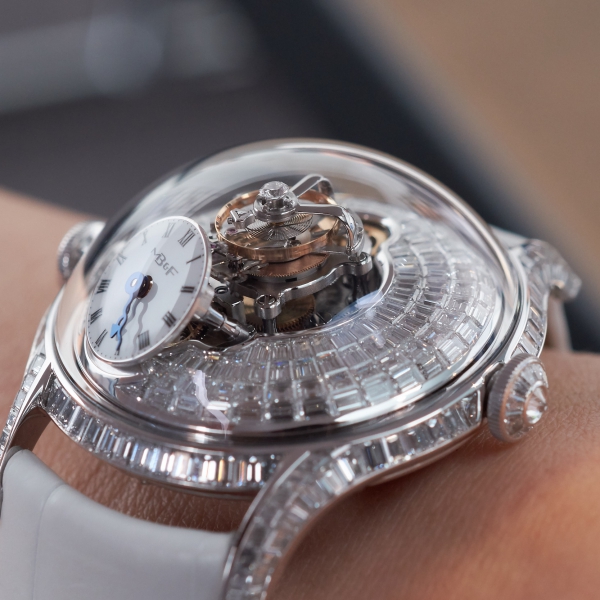 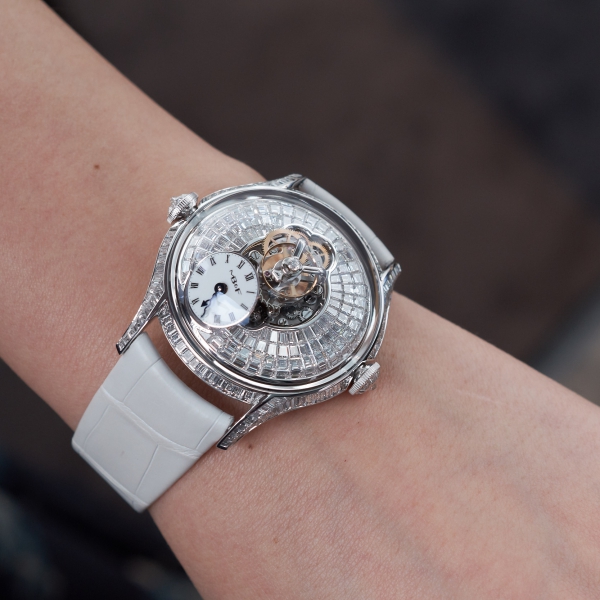 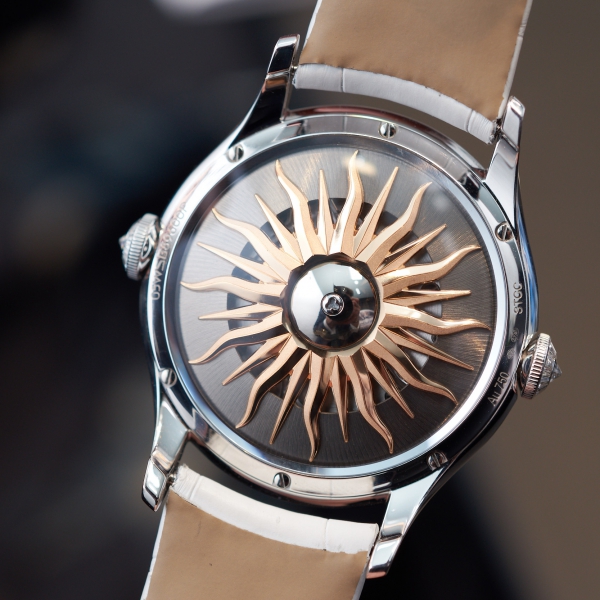 This was the first time that we visited Arnold & Son, but instantly found something to include into this selection. Their generally elegant and refined men’s watches can find their way also over to gentlewomen.

The original Nebula was introduced at Baselworld in 2016. Its skeletonized and complex construction, the pretty symmetrical layout and the A&S5101 movement created for this watch won hearts for sure. The watch is named after an interstellar cloud of dust (Nebula is a Latin word for ‘mist’ or ‘cloud’). Originally it describes any diffuse astronomical object. The name reflects the design of the watch face reminiscent of an explosion. The seven bridges on the dial side radiate from the centre toward the perimeter and give an impression of a stellar blast to the sculptural movement.

This year the Manufacture presented a 38mm case version with 8.91mm thickness designed for smaller wrists. It is not just comfortable, but the composition feels more condensed and more impressive to me. You can see the two mainspring barrels, the small seconds and the oscillating balance wheel and bridges on the dial side and the skeletonized and chamfered main plate on the back side.

The 50-piece limited edition comes with a hand-stitched brandy or grey alligator leather strap and a red gold case. 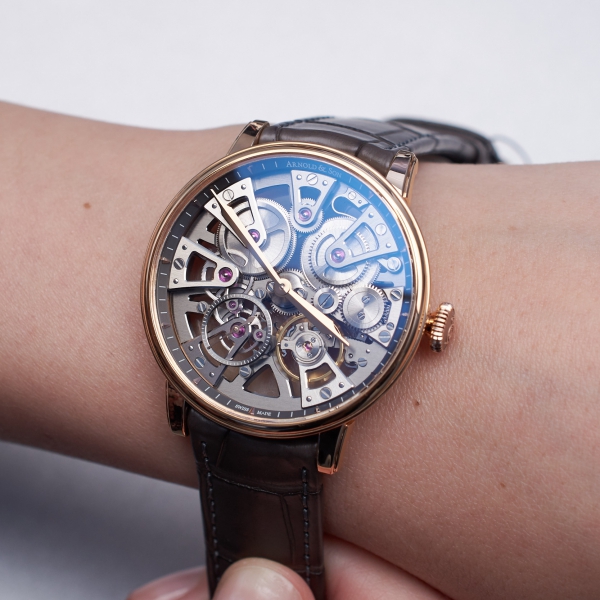 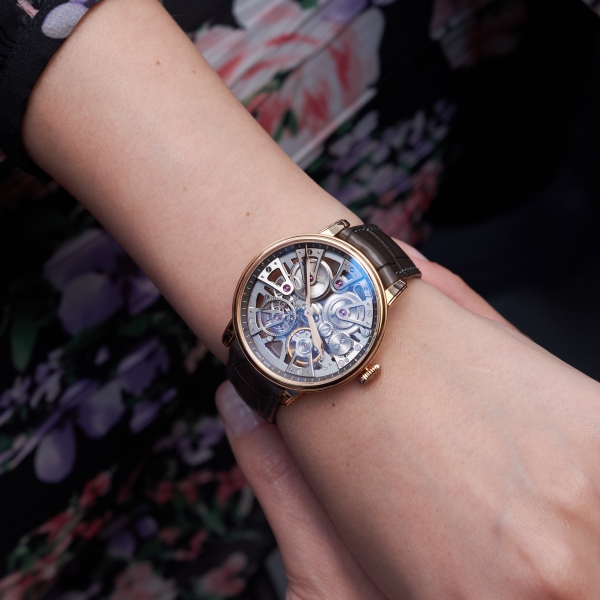 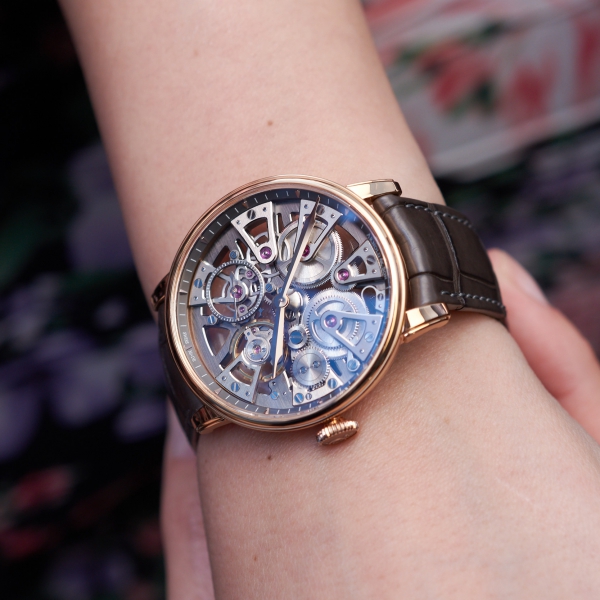 Well before women’s tendency to wear masculine pieces, Rolex was a choice for many self-conscious minds to have something stronger and dominant on the wrist.

The Datejust models were originally introduced in 1945 to celebrate the 40th anniversary of the company. With this line Rolex was the first to present a self-winding watch with a date window which changes overnight automatically.

The Datejust collection is one of the oldest line of the brand still remaining in production – Rolex fine-tunes the line consistently. The Rolex Datejust is available in a wide variety of different metal combinations, dial, bezel, and bracelet options – targeting a broader target segment than any other Rolex timepieces. The two new Datejust releases are also kind of ‘forever pieces’ which never go out of style. 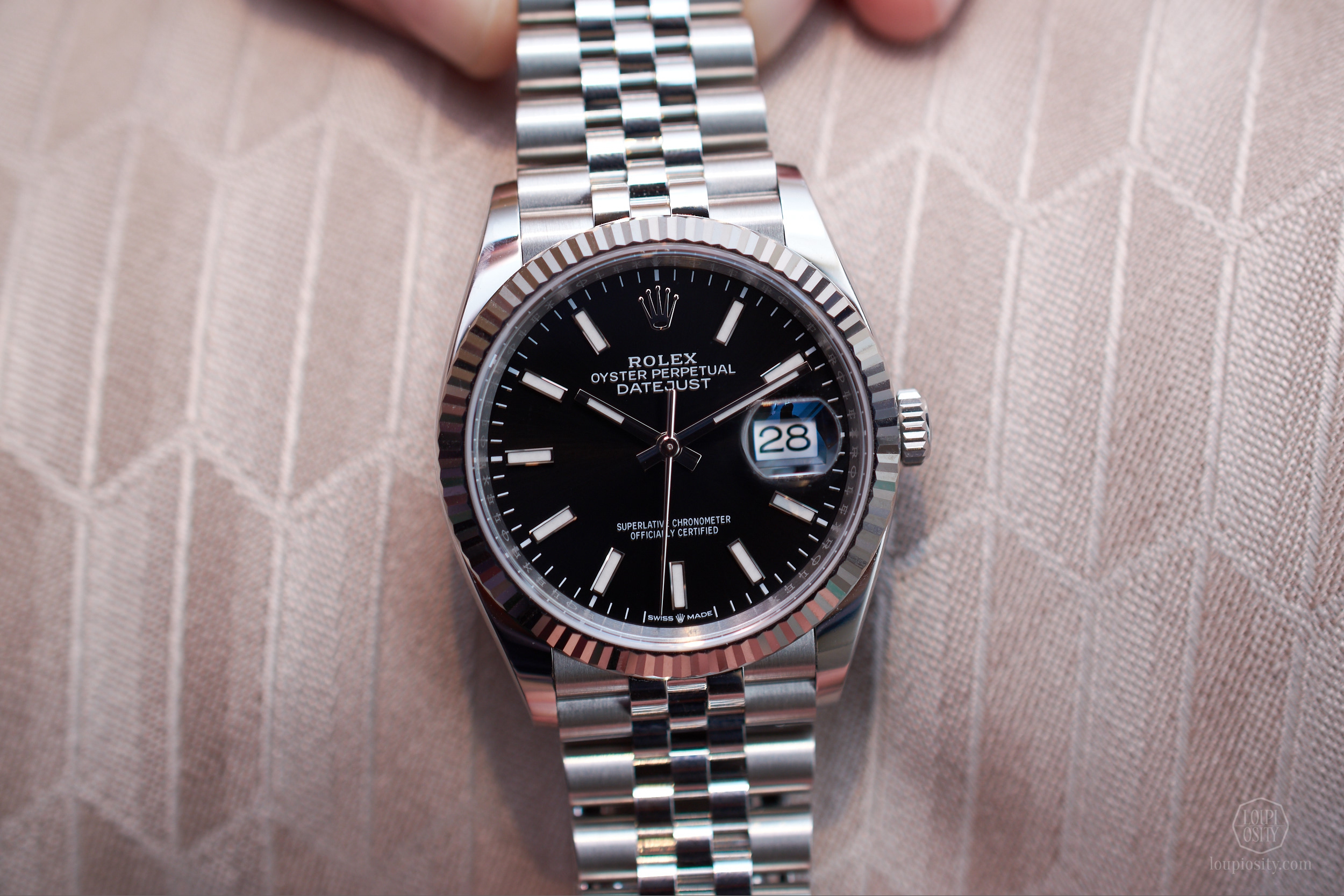 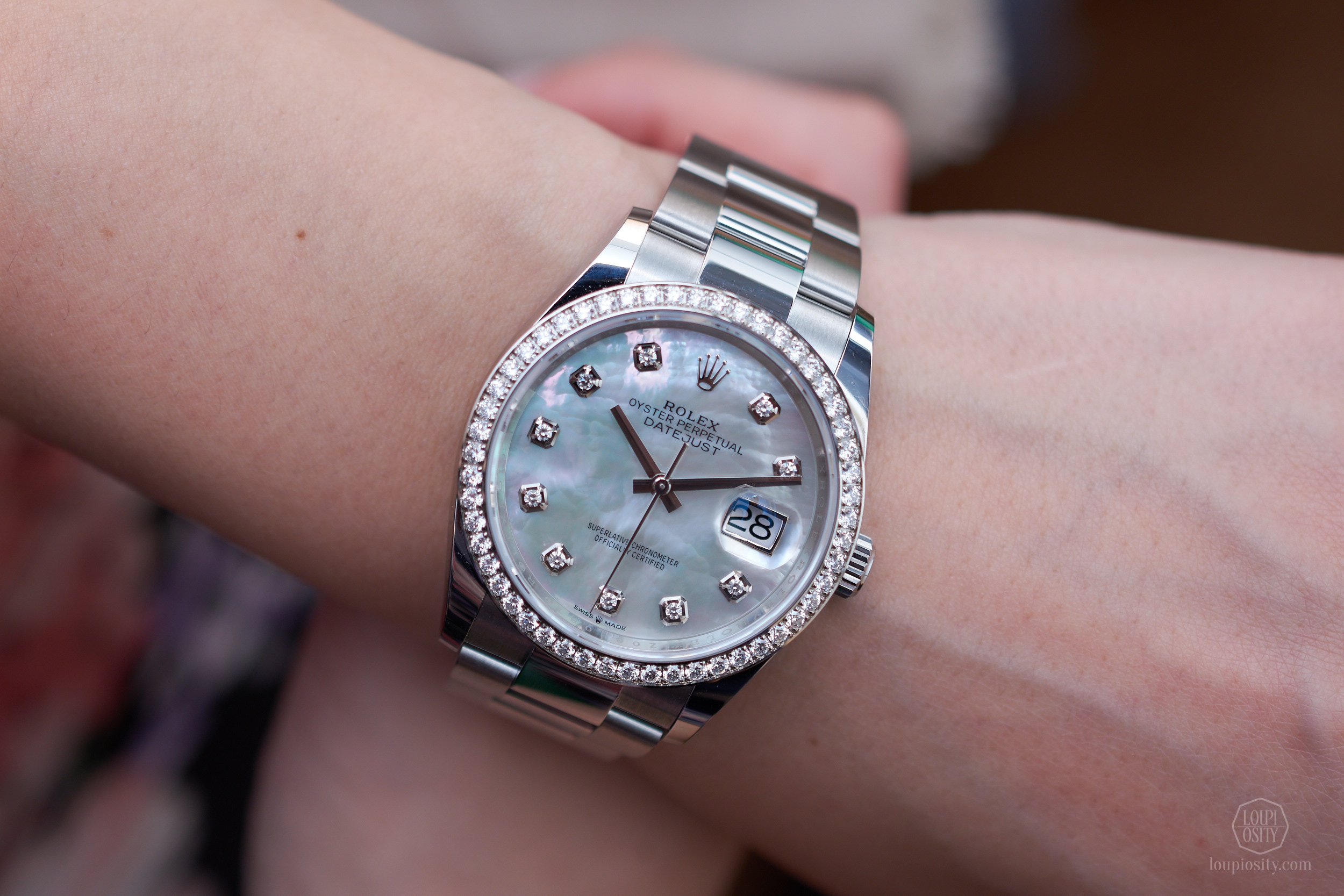 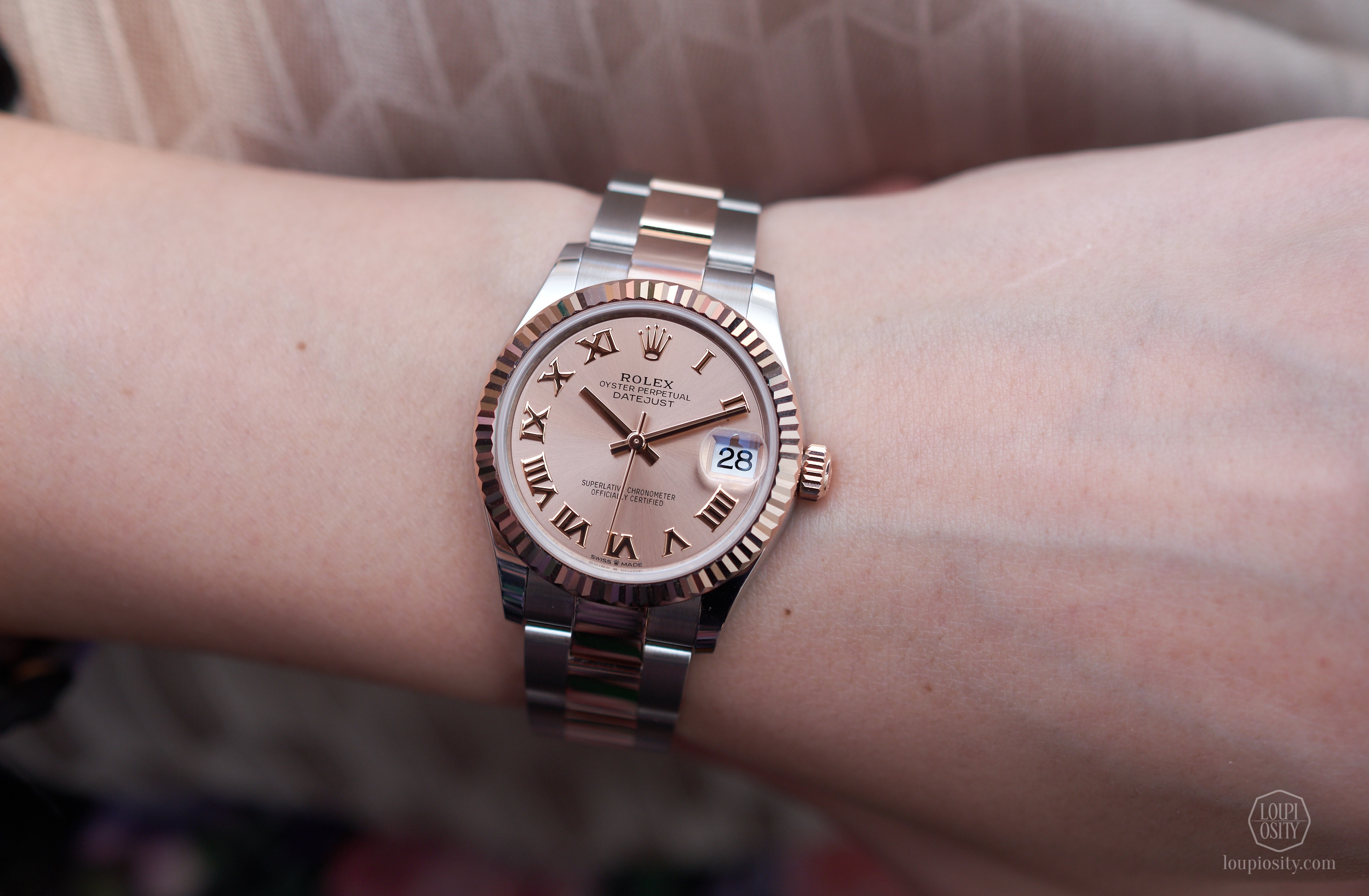 The first 36mm version has a black sunray-finish dial and fluted bezel. It comes with the five-piece links Jubilee bracelet. The case is Rolesor, a patented metal combination by Rolex – here Oystersteel and 18k white gold. I could add it to my outfit in so many styles – this model is my favourite.

The second model combines a white mother-of-pearl dial with 10 diamond hour markers in white gold settings and a bezel set with 52 brilliant-cut diamonds.