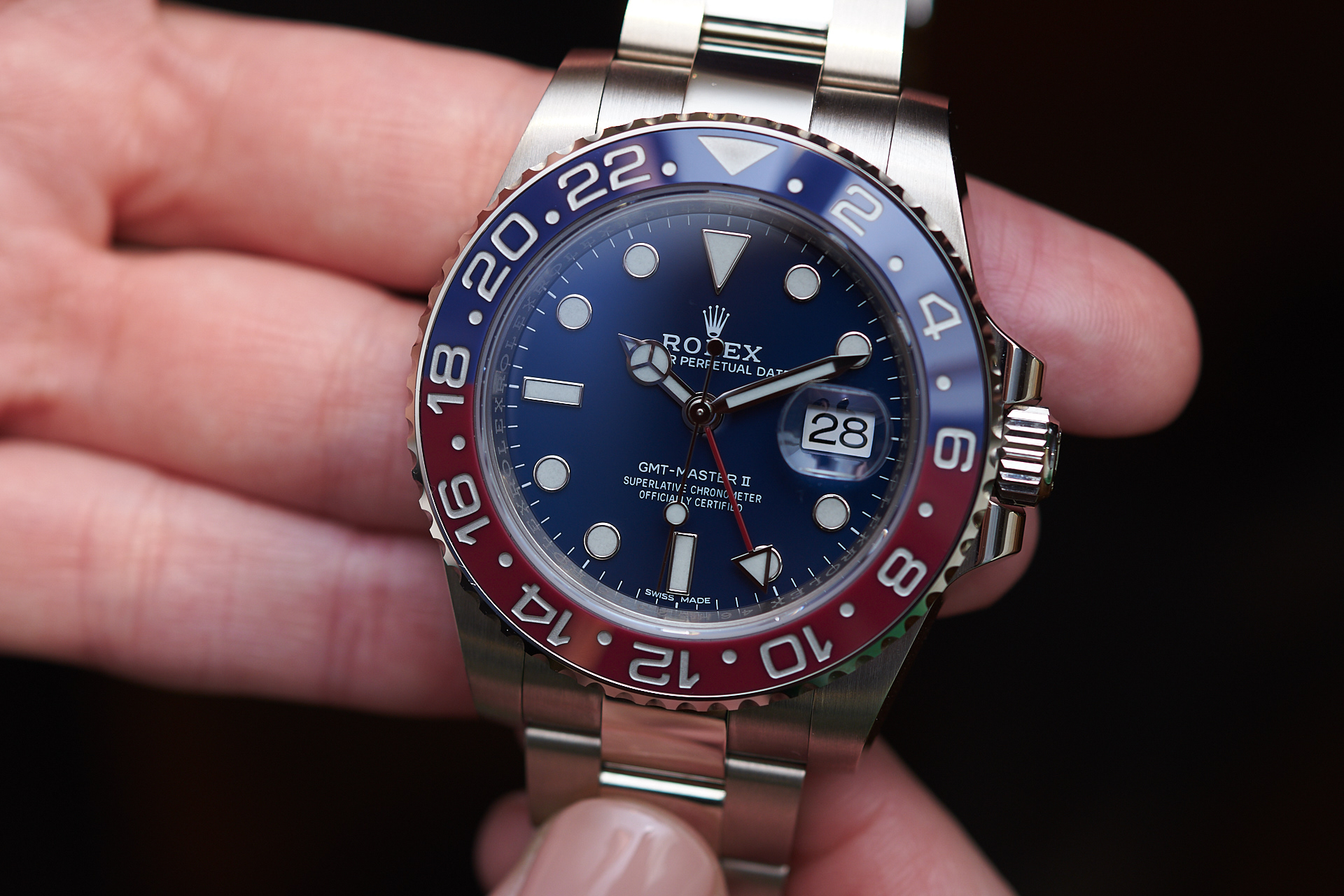 The greatest watch-debate and guessing game before every Baselworld is around Rolex. Rumours and predictions from the community about the upcoming novelties from Biel appear with even visual illustrations that are just products of the imagination of course. Rolex usually quietly awakes the fire from the background by posting unrevealing videos on the social networks.

The day had finally come to see what the company brought to the show in Basel. Yet again, I had to realize that although the predictions of hard-core Rolex aficionados are amusing to read, they do not necessarily coincide with what Rolex actually presents. The company manages to handle the product information in utmost secrecy.

The 2018 edition of the GMT-Master II came in a ‘Pepsi’ colour combination and a brown-black ‘Root beer’ version, but the real novelty was inside, the calibre 3285. In this article we focus on these.

Many people expected a new GMT-Master in 2018, as the last GMT Rolex was released four years ago (the GMT-Master II in white gold with a ‘Pepsi’ blue-red Cerachrom bezel).

The family, launched in 1955, already had the characteristic two-toned bezel for representing day and night time pointed by the second time-zone hand. That time it was made of Plexiglas. In 2005, the company introduced Cerachrom, a highly scratch- and UV-resistant ceramic material, which made its way onto the GMT-Master series too. Rolex has been a pioneer in colouring ceramic; what’s more, the company developed a process to combine colours on a single ceramic insert.

Ceramic is created by a series of firing a mixture of powdered compounds. Rolex’s ceramic is based on zirconium dioxide. Mineral pigments are added to the powder to colour the ceramic by interacting with the oxides in the zirconia. For the red colour, they had to change zirconia to another base material as no pigments could nicely colour it to red. They use another mineral oxide, alumina, mixed with chromium oxide to obtain red. It results the red translucent ‘synthetic ruby’ used for movements. In order to get an opaque red, Rolex adds magnesium oxide too. The entire process is described by the figure below. When creating two-coloured ceramics, at a certain stage when the material is absorbent (step #4), they apply metal salts dissolved in an aqueous solution on one-half of the ring. This interacts with the colour pigment and results in black on that area. The aqueous solution has to be applied evenly in order to get an even colour. Again when working with red ceramics, the aqueous solution will be different, containing cobalt that changes the red pigments to blue.

The numerals are engraved in the ceramic with diamond tools and coated by the Physical Vapour Deposition (PVD) process. During the process, the ceramic is completely coated in a one-micron-thick layer of metal, depending on the material of the watch. Finally a delicate polish removes the metal from the surface of the ceramic and gives the bezel its shine. The precious metal coating on the numerals, graduations and inscriptions remains. 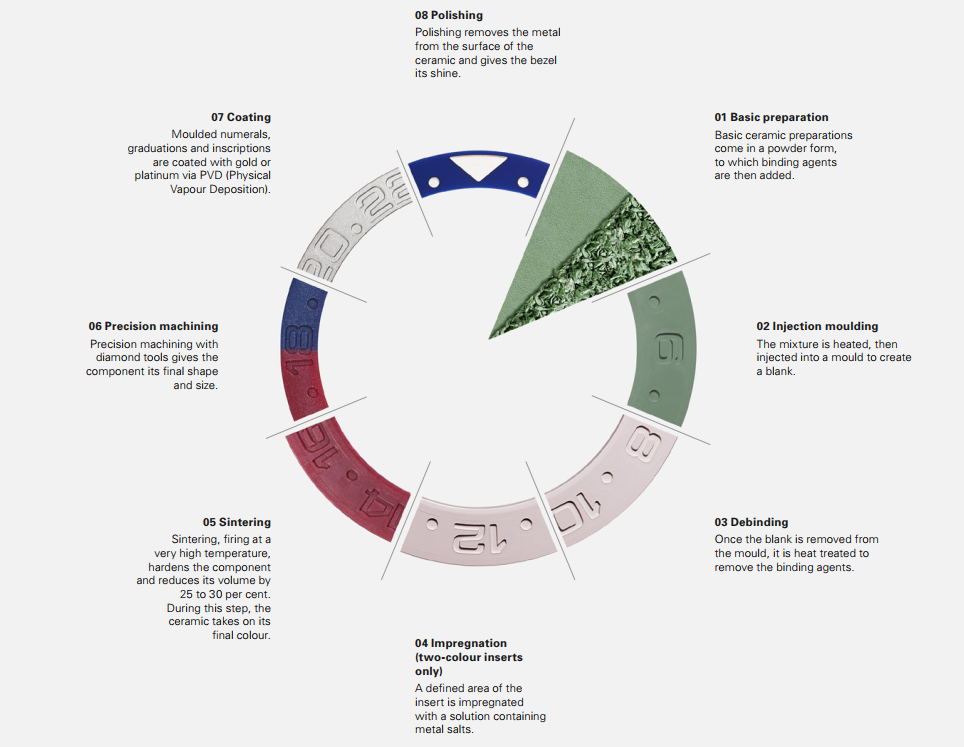 Three new versions arrived to Basel. One in Oystersteel, which is the new name of the 904L highly corrosion-resistant alloy with nickel, chromium, molybdenum and copper used by Rolex. A red-blue Cerachrom insert is placed on top. Two warmer versions use Everose gold and a nice brown-black ceramic bezel. One is in fact entirely Everose gold, the other is combined with Oystersteel, called Everose Rolesor.

Rolex wouldn’t be Rolex without the distinctive attention to details. The new watch is equipped with the brand’s Jubilee bracelet and the Easylink rapid extension system. The Jubilee is a five-piece link metal bracelet designed for the launch of the Oyster Perpetual Datejust in 1945. It marked the company’s 40th anniversary. Instead of the customary Crownclasp, the Jubilee bracelet on the 2018 GMT-Master II comes with the more robust Oysterlock.

The Oyster Perpetual GMT-Master has had the Oyster case since its release, but it has been modified slightly too. The lugs were adjusted to fit perfectly with the Jubilee bracelet (the current Oyster bracelet would not suit this watch). 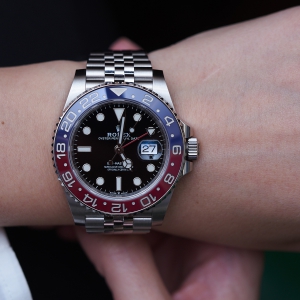 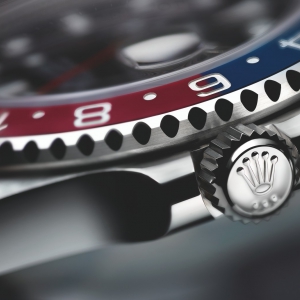 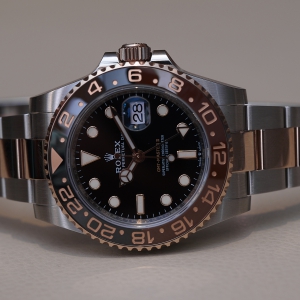 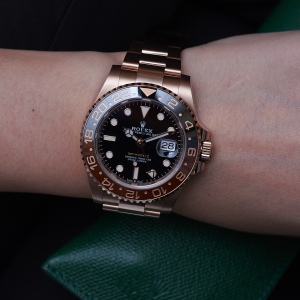 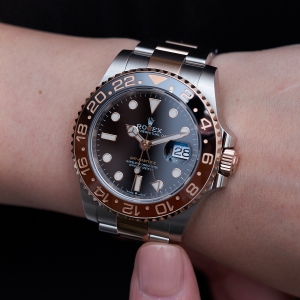 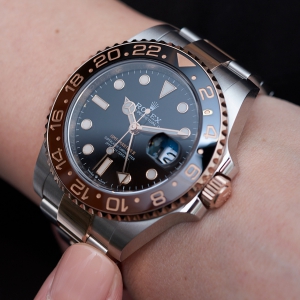 The main idea of the GMT has not changed – it allows globetrotters to read the time in two different time zones simultaneously. The conventional hour, minute and seconds hands display the time at your current location. If you travel, you can set the new time with the hour hand ‘jumping’ from hour to hour thanks to a mechanism operated via the winding crown. The adjustment can be made independently of the minute and seconds hands, and without affecting the 24-hour hand.

However, a completely new generation movement provides the function.

In 2015 Rolex presented its new generation movement, the 3255. Rolex arrived to a milestone with it by increasing its physical performance in many dimensions compared to its predecessor. The precision is twice as good as the COSC requirement for chronographs – somewhere between 2-3 seconds +/- a day – and it has 50% extended autonomy up to 70 hours. (Discover more about this calibre here.)

The self-winding Calibre 3285 follows these footsteps exactly. It includes the Chronergy escapement and many other developments queuing for patent granting. The redesigned Swiss-lever escapement improves the relay of energy from the gear train to the oscillator by 15%. It is due to multiplying the lever effect caused by offsetting the escapement from the escape wheel slightly that allows greater distance between the thinned pallet fork and the wheel. The escape wheel also has a cut-out design to decrease inertia. The pallet fork and escape wheel are made of nickel-phosphorus materials, which make them insensitive to magnetic interference.

The oscillator features the blue Parachrom hairspring, which was introduced in 2005 in the GMT-Master II and the Cosmograph Daytona. Being crafted from a paramagnetic alloy (including niobium, zirconium and oxygen) it is unaffected by magnetic fields and is 10-times more resistant to shocks.

GMT has a huge fan base, so the three new models will certainly find loving owners. Most possibly through signing up on the waiting list… 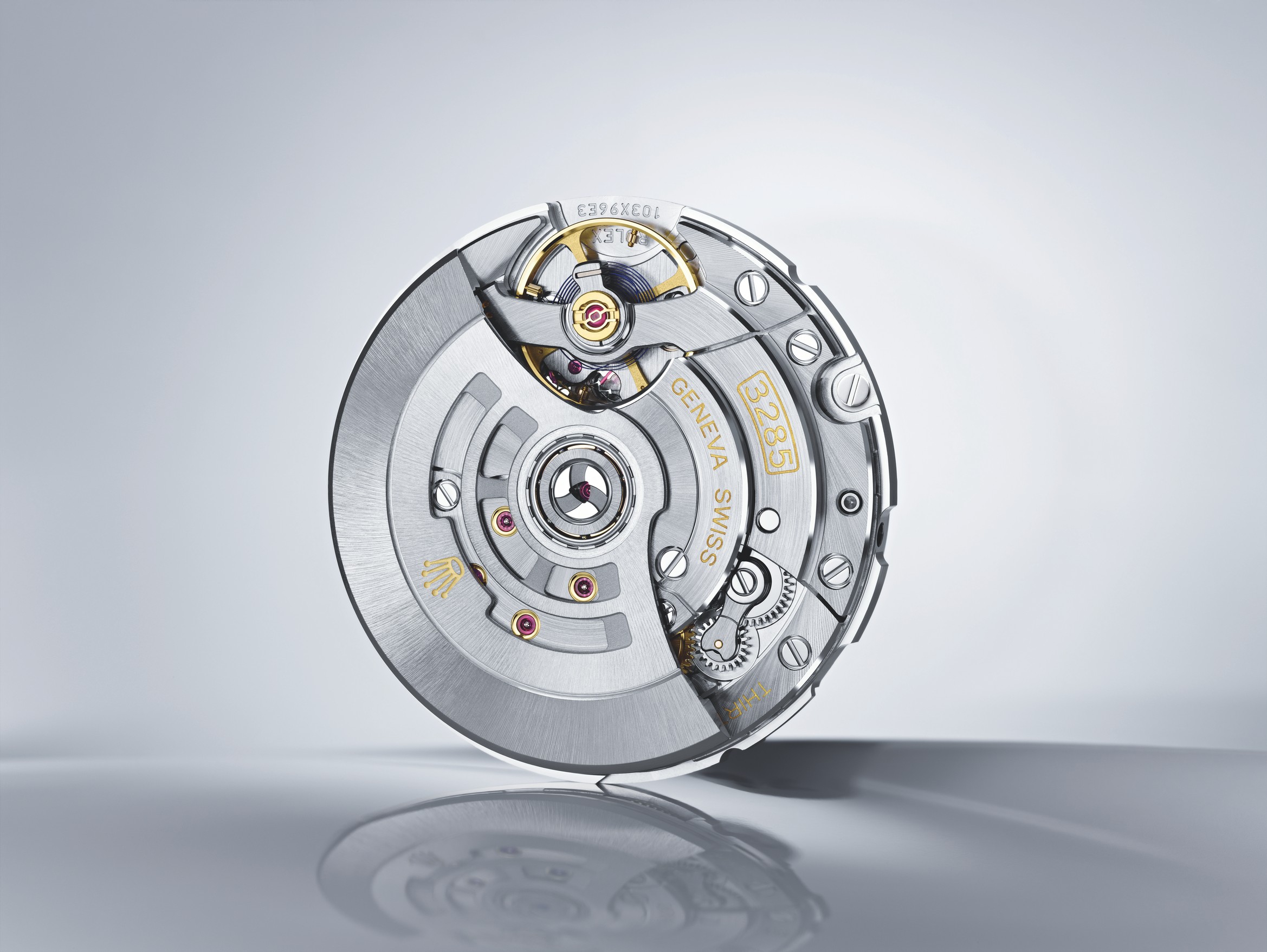 Game Changers - Phillips Watches Phillips' Game Changers auction will be held in New York with iconic timepieces from equally iconic individuals. We previewed the two highlights of the sale in Geneva.Rolex at Watches and Wonders 2022 At its first Watches and Wonders Rolex unveiled its latest collection of new watches for this year, which includes the platinum Day-Date 40, latest version of the Air-King or the 'southpaw' GMT-Master II.The OAK Collection - Rolex & Independent Chapters 4 out of the 11 chapters of the OAK Collection exhibition are dedicated to pieces of Rolex and independent brands. The vintage and contemporary museum-quality watches include special orders, ultra-rare limited editions and the most valuable examples of particular models. The four-stop exhibition world tour starts in the London Design Museum (19-25 May).