“The Excalibur pushes the pedal to the metal” 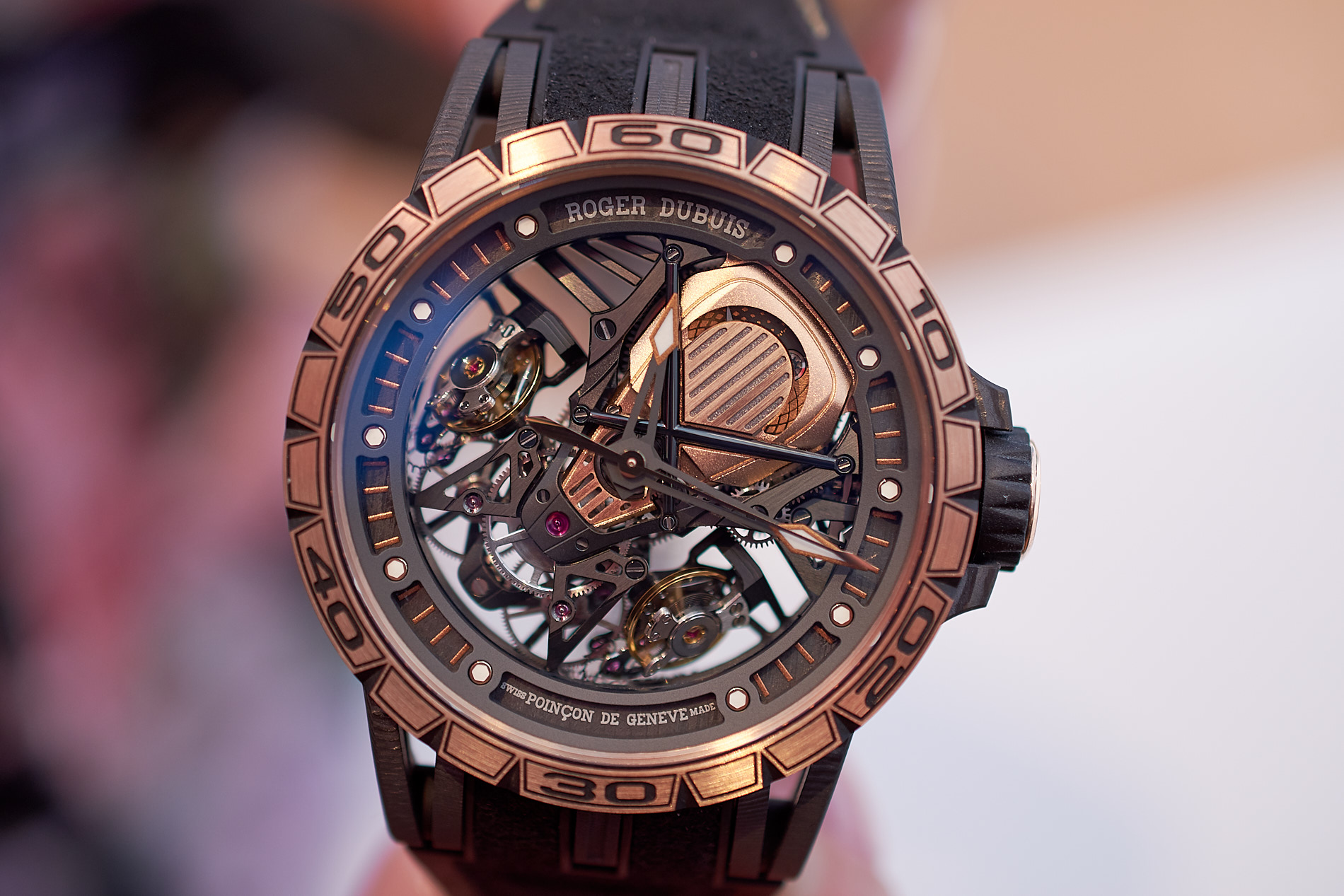 The collaboration between Roger Dubuis and Pirelli continued in 2018 with the launch of the Excalibur Spider Skeleton Automatic Pirelli. The adrenalin rush reaches new heights with the new Aventador S models. We visited Roger Dubuis at the SIHH 2018.

Roger Dubuis introduced its road-burning alliance with Pirelli last year. The partnership is part of the Pirelli Design project which arrived to a new chapter in 2018.

The Excalibur Spider Pirelli collection welcomes the Excalibur Spider Skeleton Automatic Pirelli in black titanium with a choice of deep blue or white accents, both limited to 88 pieces. The 4 Hz calibre RD820SQ moves the hands precisely, sourcing energy from the front-facing micro-rotor.

The 45mm of the case is covered with black DLC titanium featuring vulcanised rubber details (in blue or in white). The strap has inlays made of rubber from a set of certified Pirelli tires that won a race in the last season. You can find a unique Pirelli tyre pattern on the inside of the strap, plus an important feature, a quick release system for easy interchangeability. 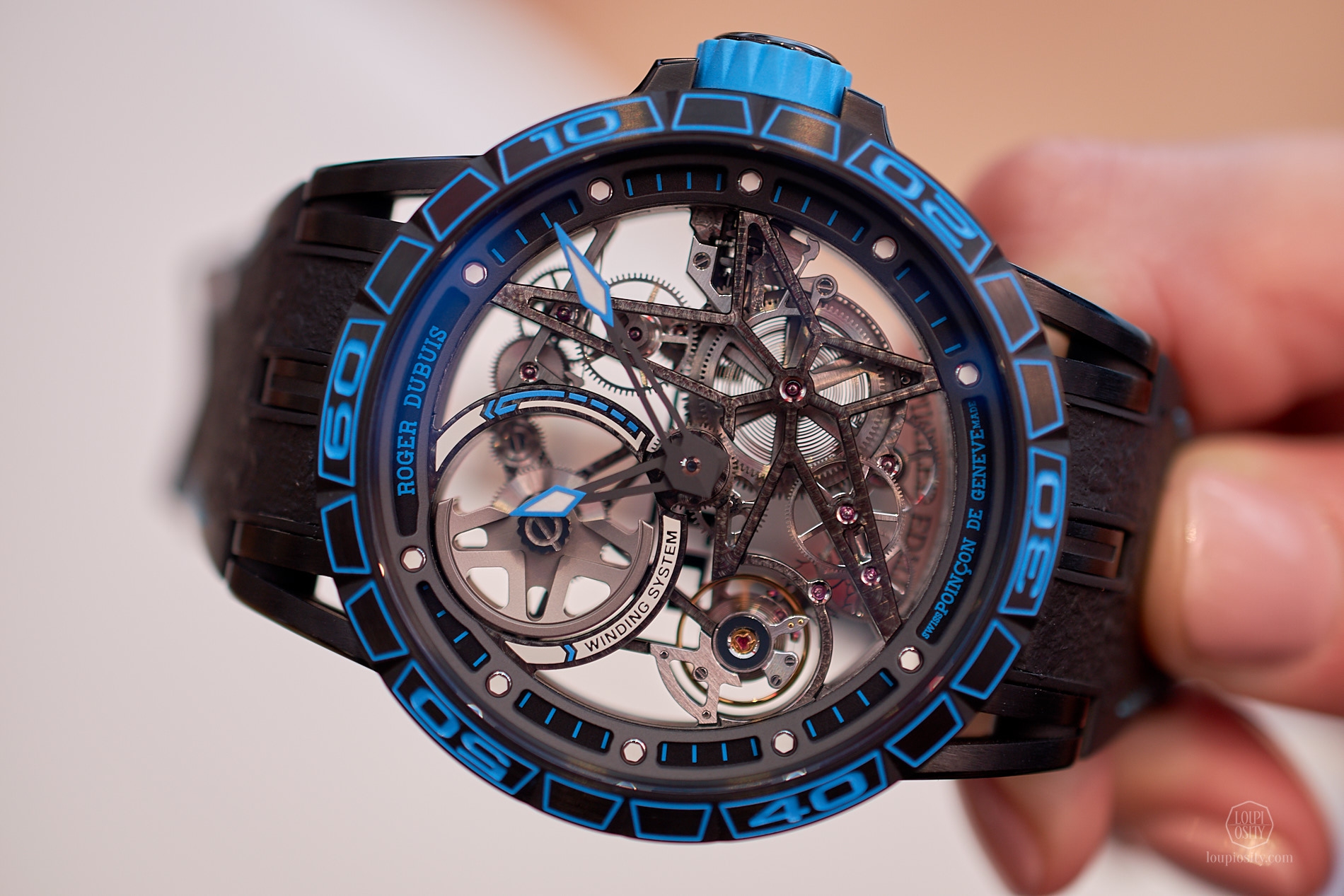 “Powered by Raging Mechanics” – the partnership with Lamborghini

Roger Dubuis launched a partnership with Lamborghini, one of the most famous Italian brands and manufacturer of luxury supercars – they actually say “We are not supercars. We are Lamborghini.”

Because of their sharp and bold designs, their quest for innovation, the unquenchable thirst for challenges and the lifestyle they convey, the two brands inevitably resonate with each other.

The 45mm case is crafted from titanium and so-called C-SMC carbon.

Many different technologies are used in composite manufacturing. SMC (Sheet Moulded Compound) is both a process and a reinforced composite material. SMC is characterised by a very high productivity, excellent part reproducibility, cost efficiency and the possibility to realise parts with complex geometries and integrated functions, e.g. inserts or colouring. The technique can be used with glass fibres or carbon fibres – the latter case we call C-SMC. The material is intended for a range of lightweight parts and subsystems for the automotive, aerospace, commercial truck and other markets. Over the course of its history, Lamborghini has devoted increasing efforts to the research on composite materials. See more here.

“Power watches” need “a power movement” – the RD103SQ calibre with hours, minutes, jumping second function and power reserve indicator. The new skeleton double balance wheel movement works at a 2 x 4Hz (28,800 vph) frequency. The balances are placed inclined and in a 90 degree angle to each other – setting in angle reduces the effect of the gravity on the spring. The Excalibur Adventador S Pink Gold has a fluted 18k pink gold bezel, crown, hands and bridge cover. A new feature was the quick release rubber and Alcantara strap fastened with a black DLC titanium folding buckle. 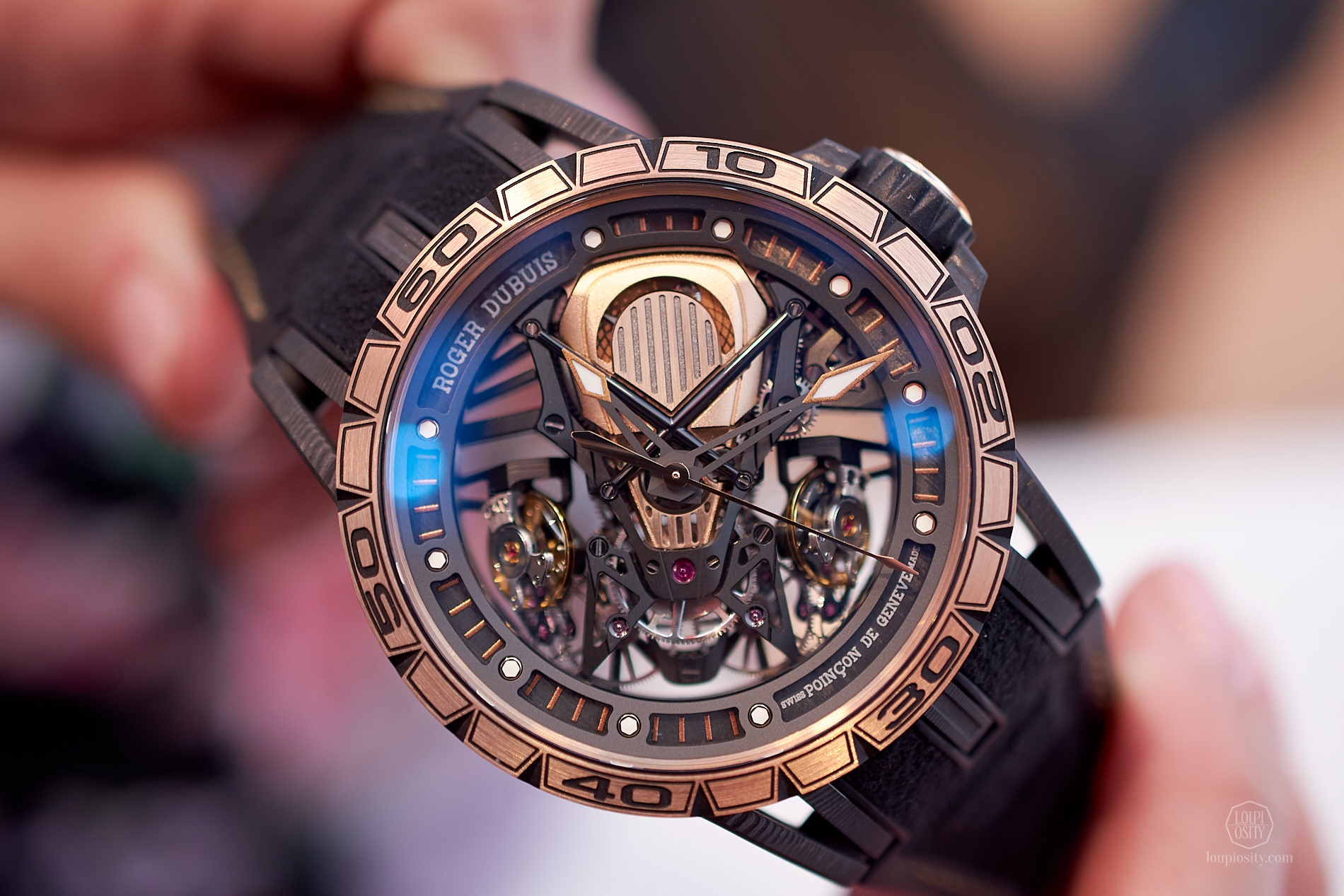 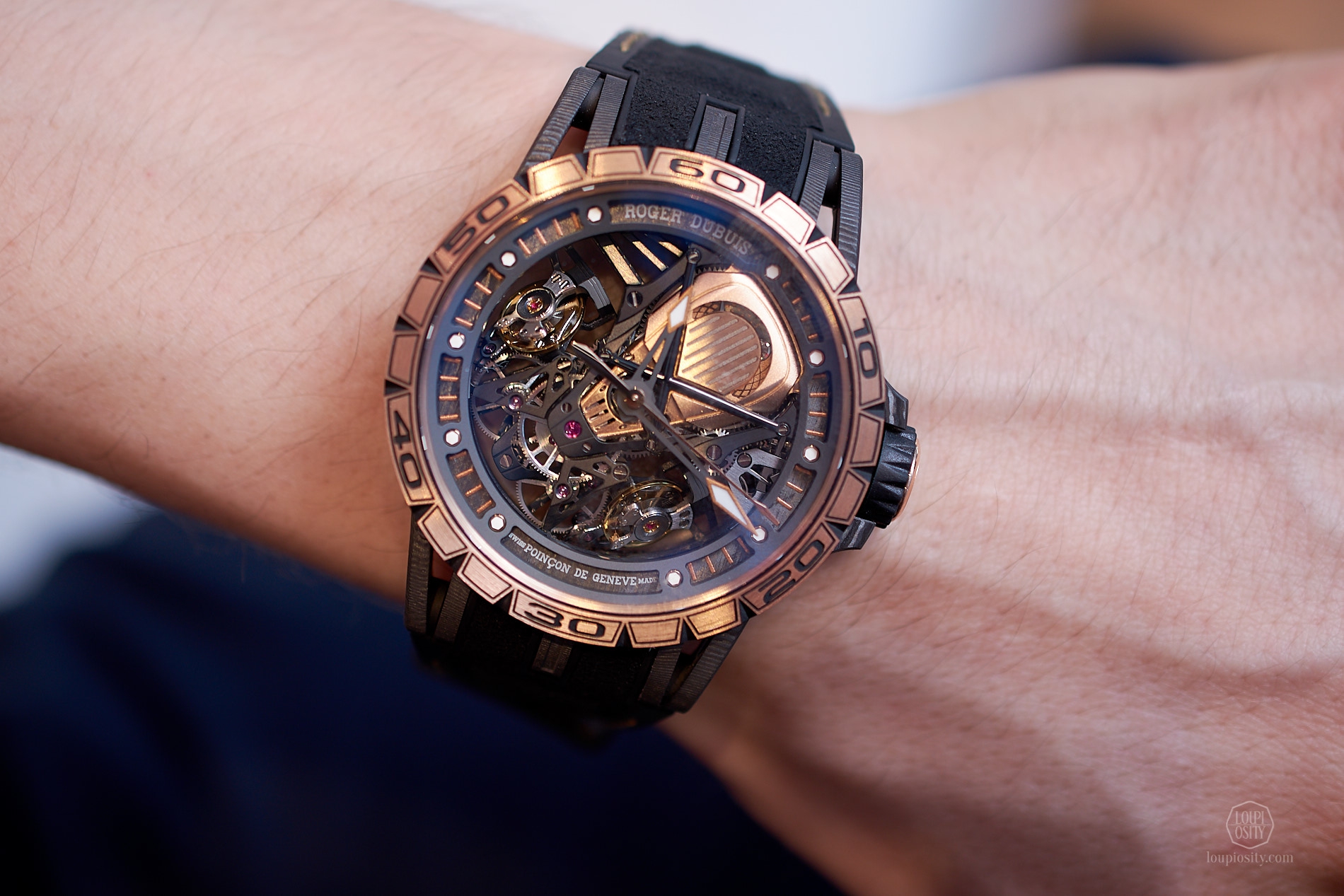 Both Lamborghini and Roger Dubuis have a strong focus on the personal relationship with their clients. Jean-Marc Pontroué (Roger Dubuis current CEO who is taking on the CEO role at Panerai in April 2018) underlined that the special experiences they organise for their clients raise an emotional bond and turn customers to true believers.

Roger Dubuis - Knights of the Roundtable Roger Dubuis presented new additions to the Knights of the Roundtable series. This time, the extreme finishing is paired with extremely detailed knight miniatures frozen in motion and an appealing play of light on Murano glass.Girls don’t just wanna have fun – Part 23, Watches and… In this series we showcase mechanical and artistic wonders that were especially designed for women and others originally for men that come alive on spirited ladies’  wrists. We participated at the Watches and Wonders 2022 and we browsed a few novelties. Panerai at Watches and Wonders 2021 At this year’s Watches and Wonders Panerai presented new Luminor and Submersible timepieces and with their new IOC-UNESCO cooperation the Neuchâtel-based manufacture reinforces its commitment to a sustainable environment and a healthy ocean.