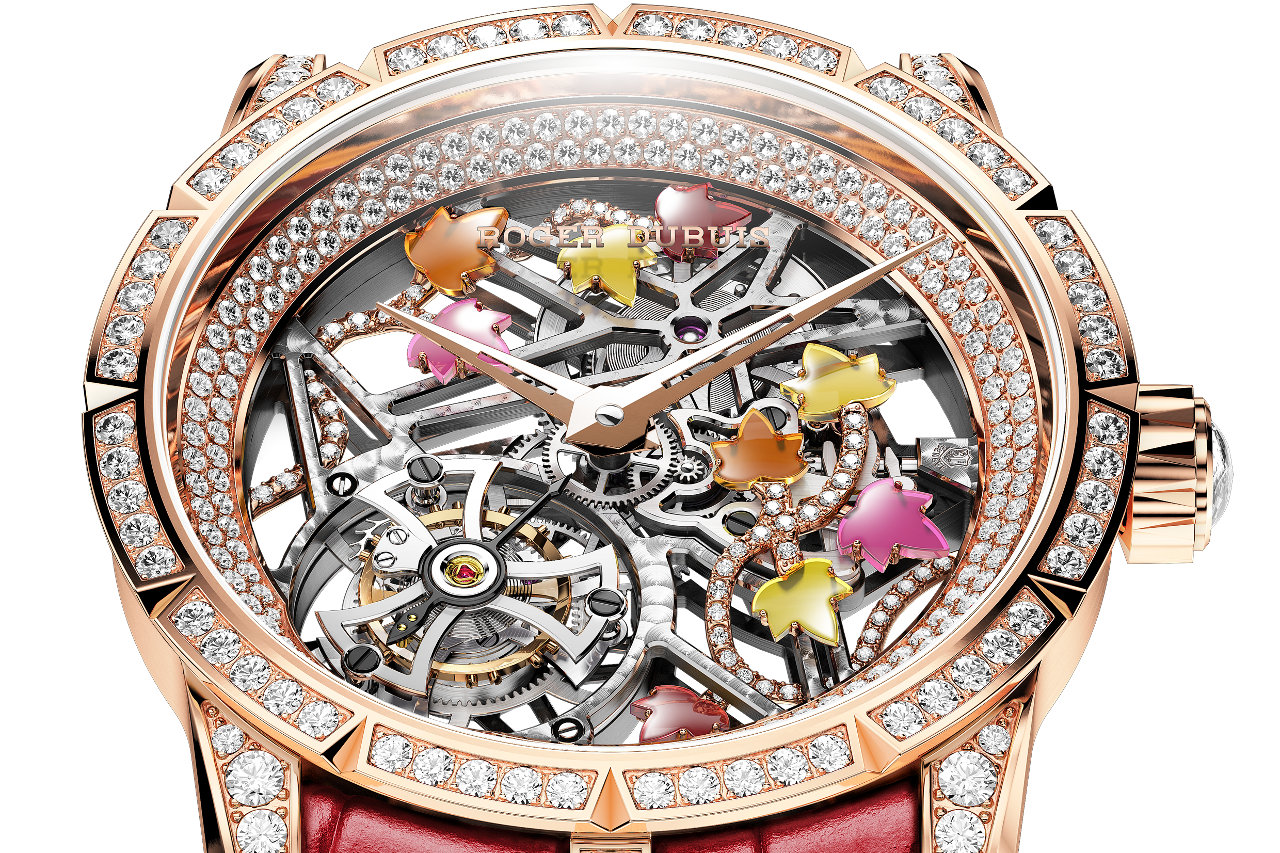 In this series we showcase ticking objects of love that we like to see on ladies’ wrists. They may be specially designed for women or be the female versions of masculine timepieces, or just macho watches getting elevated to the next level when worn by a tough chick, we’d like to bring them to you.

In this part we have it all: one of the purest beauties ever created for women, the Piaget Traditional Oval; based on the as*kickin’ manly Excalibur skeleton watches the Roger Dubuis Excalibur Creative Skeleton Brocéliande which in this version have been chased through the forests to come out with ivy leaves on its forehead; and the gem-set Parmigiani Fleurier Tonda 1950 with a mother-of-pearl dial – from smooth operators directly onto lady wrists.

See what is your style.

The name of the legendary forest Brocéliande first surfaced in the chronicles of the 12th century; it is found somewhere in Bretagne. As all legends, the exact location of the forest is unknown; nowadays most people suspect it to be the forest of Paimpont near Rennes… The forest appeared in King Arthur’s legends, and according to superstitions, Merlin, one of the world’s greatest sorcerers rests also here. Since then many fantasy novels and films have been inspired by the forest.

Excalibur is King Arthur’s mythical sword, which is usually paired with magical powers. According to certain legends, whoever pulls the sword from the stone will become the warrior who will protect the country from attacks. Inspired by the Arthur Legends, Roger Dubuis created the Excalibur collection, which bears the slashes of the famous sword either in the form of straight and stretched roman numerals or in a similarly shaped skeletonized movement. Enhancing the rough look further, the bezel of the entire collection has triangle-shaped cutouts from the heavy blade. The special skeleton movements are important parts of the Geneva watchmaker’s identity; immediately recognizable examples of these are the Spider Skeleton Double Flying Tourbillon and the Spider Skeleton Flying Tourbillon. 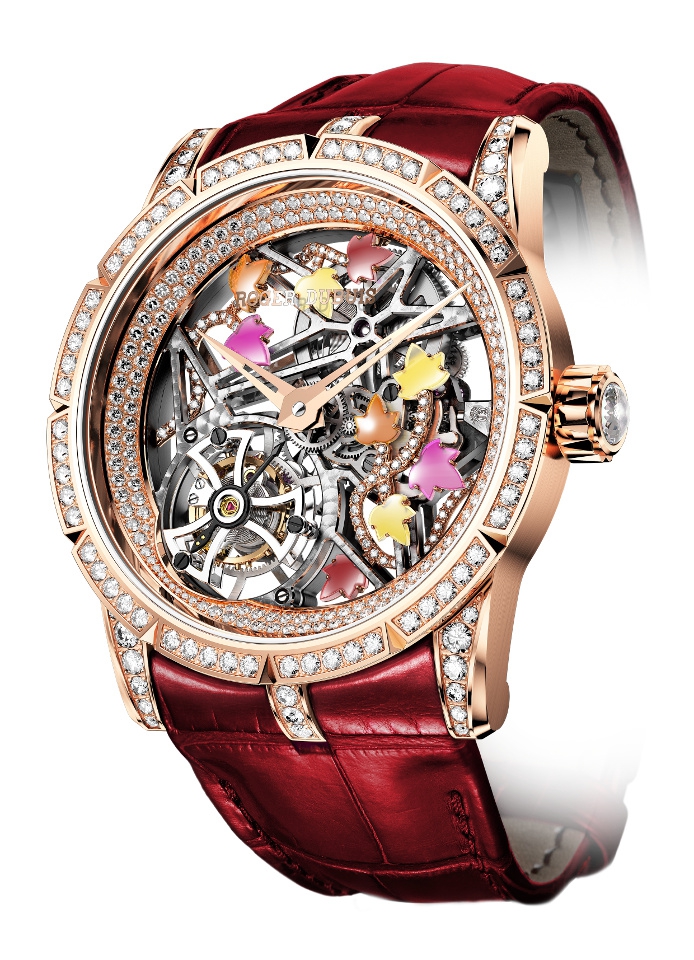 Ivy is a recurring motif in literature and mythology. Popular poets were crowned with wreaths woven from ivy leaves. Bacchus (Dionysus in Greek mythology), the Roman God of intoxication and revelry, whose saint plant was the ivy, was portrayed wearing a wreath of grape vines and ivy leaves. Ivy has also been a symbol of fidelity for centuries. Greek priests used to hand a bunch of ivy to the marrying couple. Nowadays it continues to be a frequent accompaniment of weddings, as a symbol of conjugal love and loyalty.

Although it is a feminine timepiece, it still carries the trademark “Roger Dubuis” traits: the skeleton flying tourbillon, the “wedged”, reasonably sized 42mm watch case, but it’s decorated with diamonds and ivy leaves (semi-precious stones) in autumnal colours and the strap is ruby colored alligator leather. The gem setting work is remarkable especially on the tiny ivy stems winding in the movement. Just as other movements of the brand, the RD505SQ hand-wound calibre operating in this timepiece received the Hallmark of Geneva. It is limited to 28 pieces. 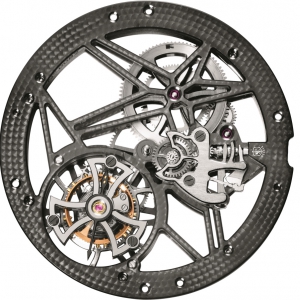 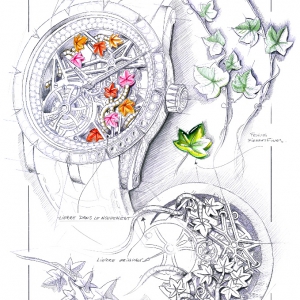 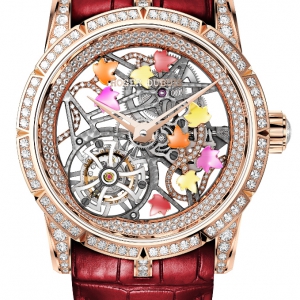 Piaget re-thought many classics before, most recently the Black Tie Vintage Inspiration – the original of which was made famous by Andy Warhol. (Actually he had quite a good taste in watches; he was often seen wearing a Rolex and a Cartier.)

The Piaget Traditional Oval – originally from the 60s – was also given new life. The jade dial version with emerald accents was also worn by Jackie Kennedy. This is an extremely feminine, fine and refined piece that can even be worn as jewellery. The horizontal oval dial and the precious metal strap are particularly characteristic. According to a slogan from the 70s: “At Piaget time is measured only in gold.” The gold strap’s fabric-like texture is very interesting: it consists of small parts, and is thus quite flexible and fine; it is extremely comfortable to wear. This hand-engraved, so called “palace” finish gives the bracelet an almost iridescent effect. The classic silver dial is also available in white and rose gold versions, both are set with 24 brilliant-cut diamonds. My personal favourite however is a piece from the “Extremely Piaget” collection: 18k pink gold with natural turquoise dial, set with 20 diamonds and 4 natural turquoise cabochons. 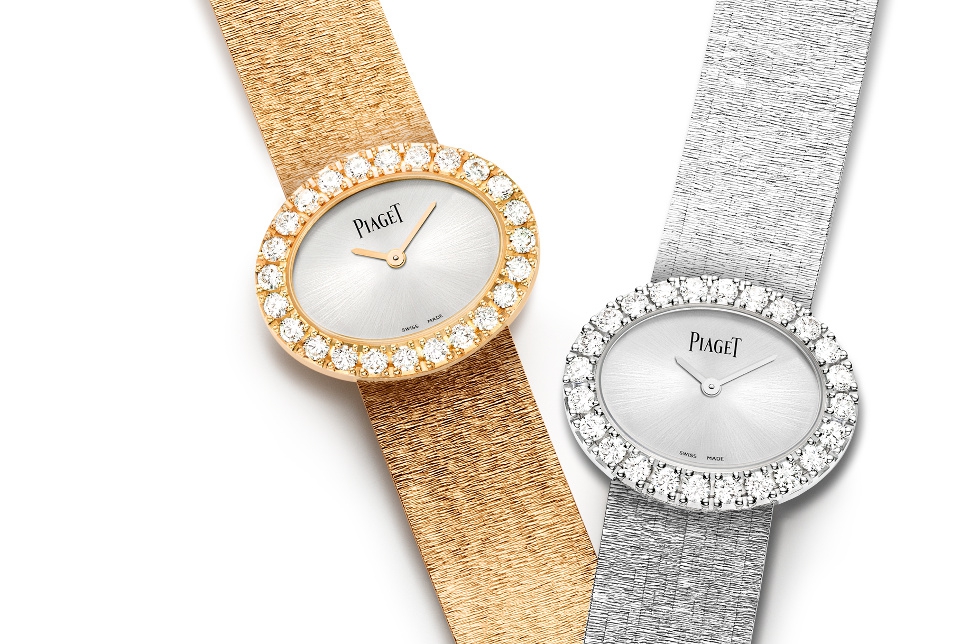 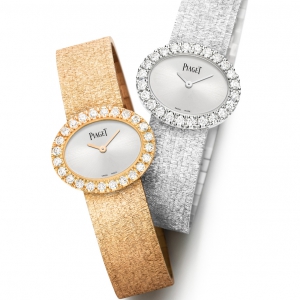 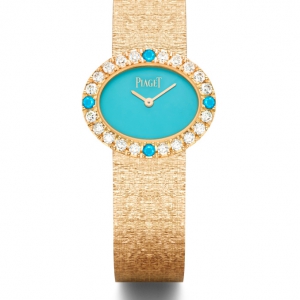 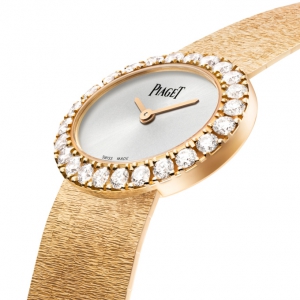 Parmigiani Fleurier offers traditional styled timepieces, such as the Tonda 1950, haute horlogerie pieces like the Toric models or the Ovale Tourbillon to the avantgarde Bugatti Super Sport, based on the Bugatti Veyron supercar. Their pieces incorporate Vaucher movements tailored and decorated. The Tonda 1950 is set with diamonds and the Tahitian white mother-of-pearl dial is no exception, it houses an ultra-thin automatic calibre with 42 hours power reserve. The metal strap of the latest model reminds one of the Metropolitaine versions’ straps, but it does not encase the watchcase. Consequently, and thanks to the workmanship of the rose gold, the watch is very comfortable, we can hardly feel that we are wearing it due to its shape and weight. Naturally this does not apply to the appearance of the watch. It fitted extremely well with my black suit and white shirts… 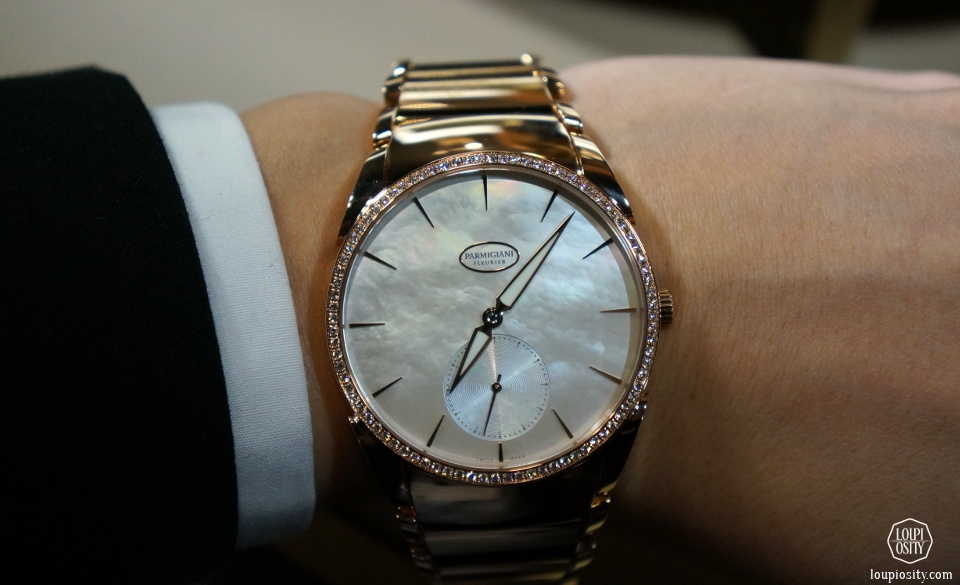