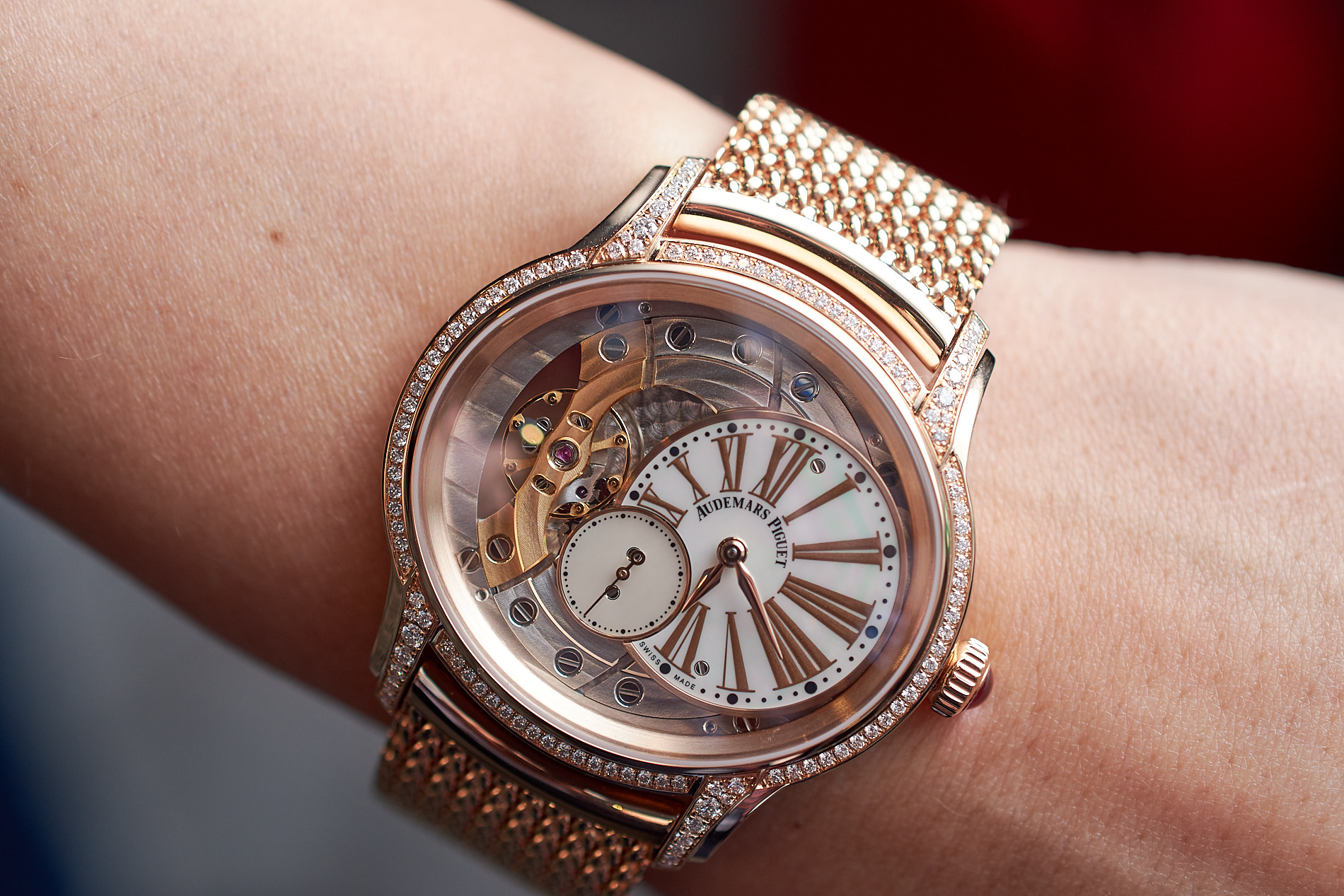 In this series we showcase mechanical and artistic wonders that were especially designed for women and others originally for men that come alive on spirited ladies’ wrists. SIHH in January always brings new options for women demanding artistic and technical excellence in a timepiece. We collected some from the latest exhibition that might interest you too.

Female watch connoisseurs could find a number of tempting pieces at this years’ show. It is rather refreshing to see that brands consider many types of ladies during the designing process. Very delicate, feminine models are present just as more technical and simply cool urban watches.

To me, the A. Lange & Söhne press conference is certainly among the most anticipated ones at SIHH every year. Not only because of the marvellous timepieces the clean Glashütte air produces, but also for the lively performance of Anthony de Haas, Director of Product Development. This year the brand showed us seven new pieces, including complications (like the Triple Split and 1815 “Homage to Walter Lange”, more on these later).

I’m drawn by the Little Lange 1 line, but we covered it last year, so let me focus on her stablemate, the Saxonia Thin in Copper Blue. While A. Lange & Söhne excels in high-end complications, they are also on the top of the game in simplicity. Saxonia Thin is the family that represents the essentials of watchmaking according to A. Lange & Söhne. Nothing more than pure and precise timekeeping would be encased in precious metals. For this reason (and not for the quest as they emphasise it), the L093.1 movement of Saxonia Thin timepieces is a mere 2.9mm in thickness and the finished timepieces are in the 5-6mm range.

Purity and comfort make these models so enjoyable to wear for women who also look up the mens’ shelves when buying a timepiece.

The dial of the white gold novelty looks like it was aventurine hardstone, but in fact it is crafted from solid silver and coated with a thin layer of exquisitely shimmering goldstone. The microscopic copper oxide crystal flecks in the coating recall the midnight sky on your wrist. The proportions, the contrast of the deep blue and white gold indexes make you to easily fall in love with the watch. Matching to its face, the hand-stitched alligator leather strap is dark-blue too.

The manufacture calibre includes a flat mainspring barrel which delivers a maximum power reserve of 72 hours despite its compact size. 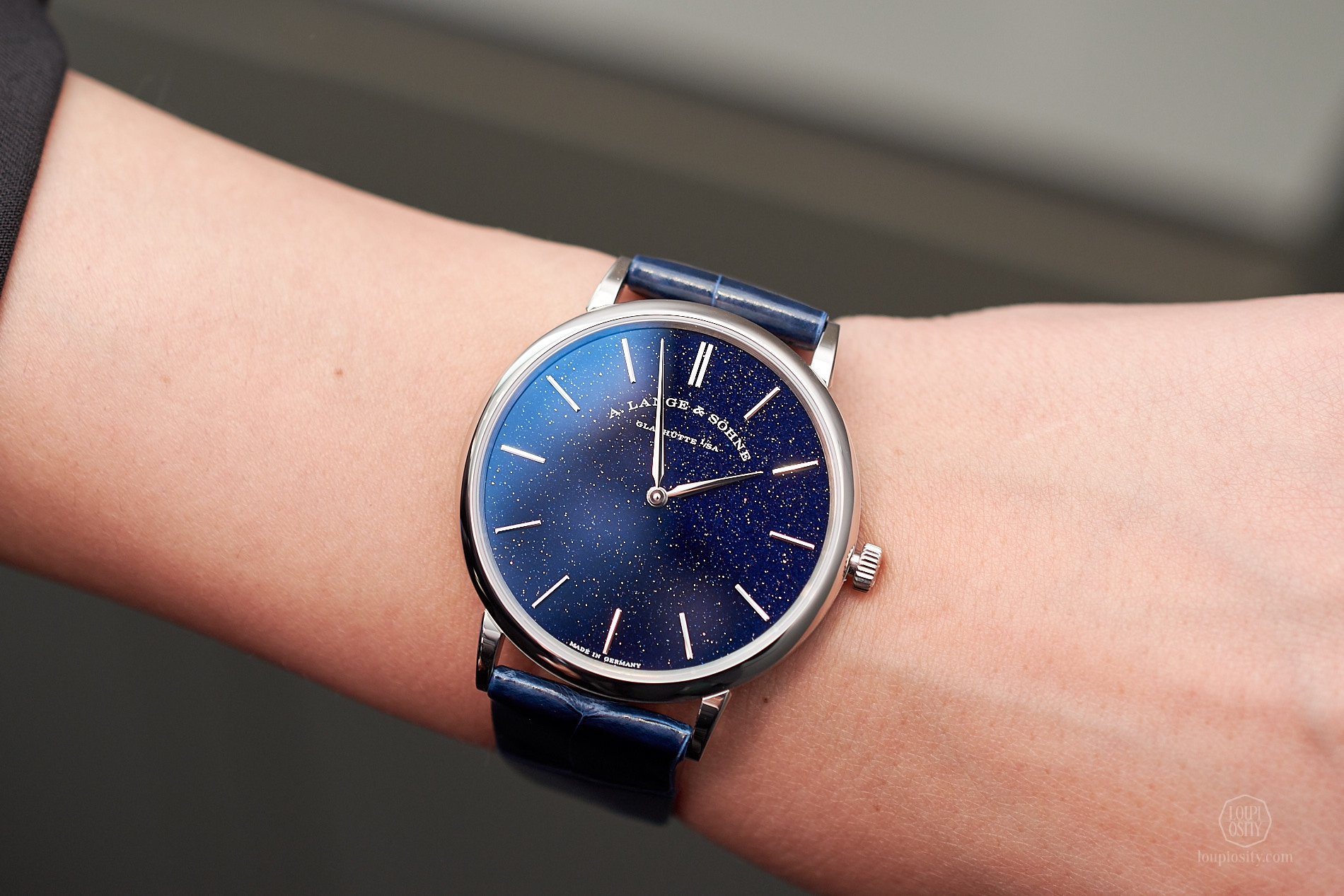 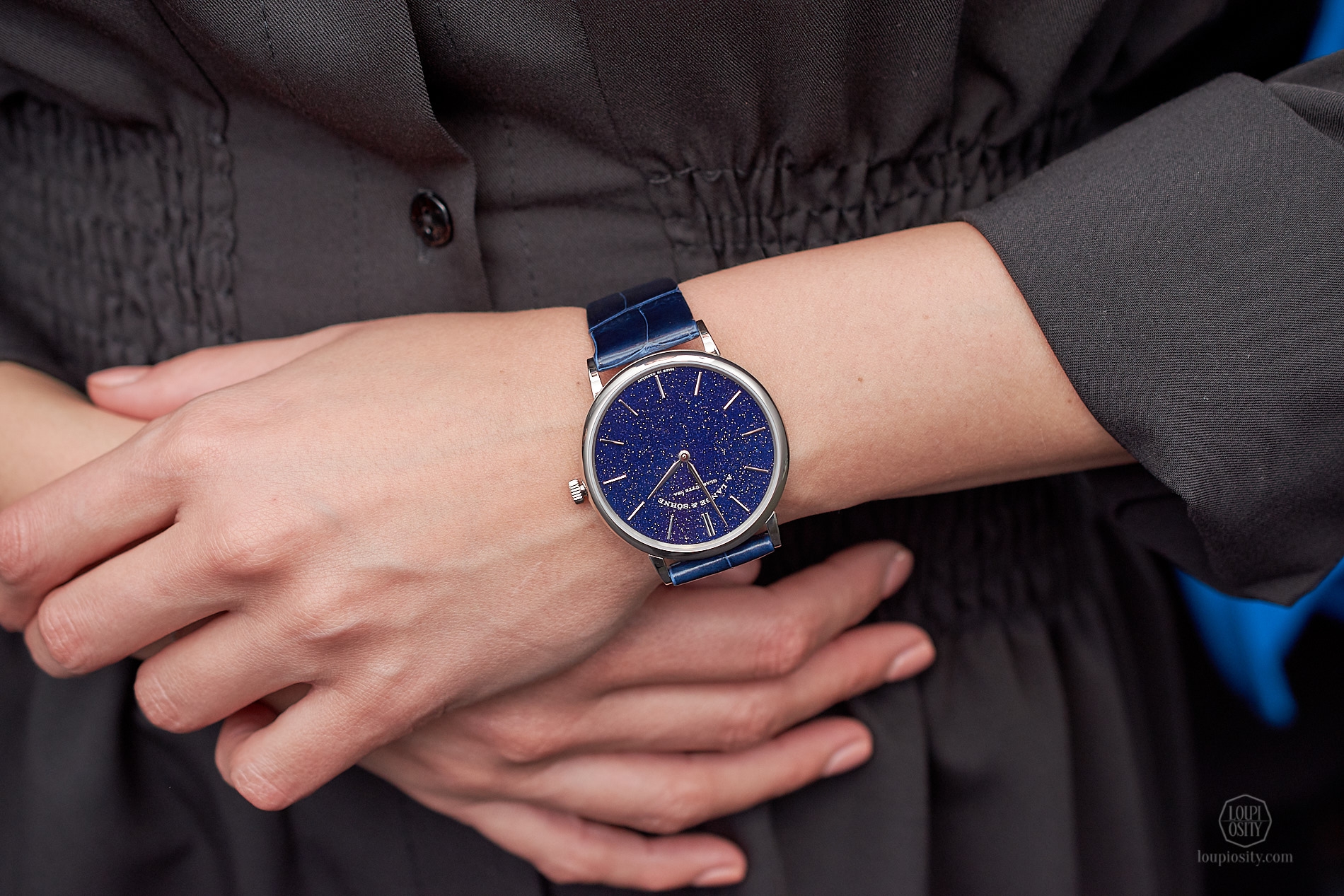 At Audemars Piguet product presentation we heard already a few times one of the biggest questions of all time; what do women want? Of course AP has an answer, at least for watches. In 2013 the company released a campaign with the cool Belgian model Anouck Lepère, in 2016 they created a video series around the Millenary entitled “When Artistry Meets Beauty” and at SIHH 2017 the Royal Oak Frosted Gold debuted, which was co-created with Florentine jewellery designer, Carolina Bucci.

Besides the exceptional Royal Oak Concept timepieces AP introduced this year, women are targeted with three new Millenary watches. Two models come with mother-of-pearl dials and diamond-set bezels and lugs – one of them is white gold the another is pink gold. The third pink gold piece is adorned with the “frosted gold” finishing (just like last year’s Royal Oak). The technique was demonstrated by an artisan at the presentation, watch this:

The shimmering of the frosted metal continues on the dial thanks to the characteristics of the opal applied.

A new metal strap, the Polish woven gold bracelet has been made available for all three models. The appearance of this bracelet is similar to the popular Milanese bracelets, but due to the angles of the links they are more comfortable. In order to achieve a solid but supple surface, the goldsmith weaves a series of threads around an axis; the first directed to the right, the next one to the left and so on. AP also offers the strap browser function on their site launched last December with a rich 19 colour selection for the Millenary.

All models are powered by the hand-wound Calibre 5201, which was designed specifically for the watch’s oval shape. 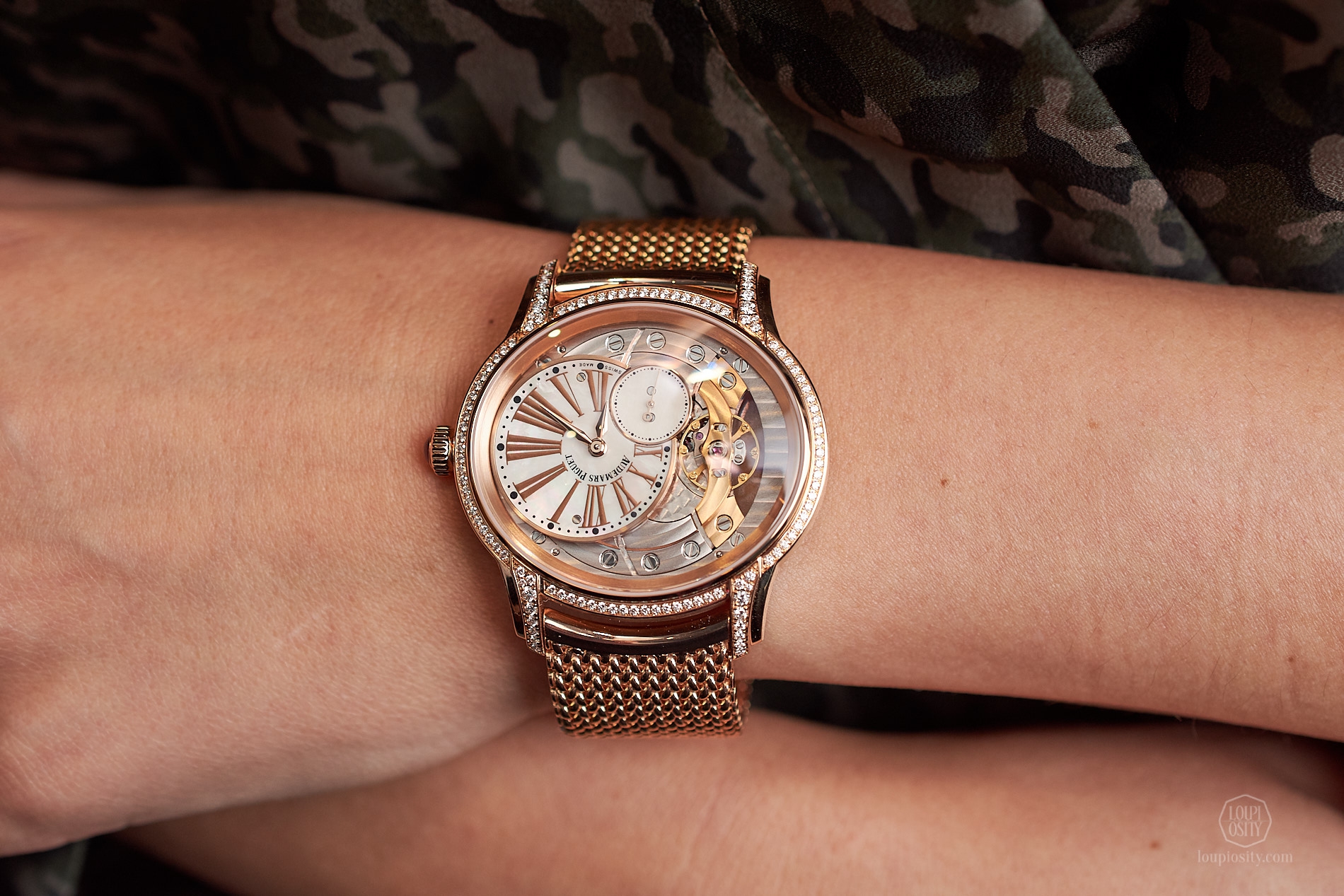 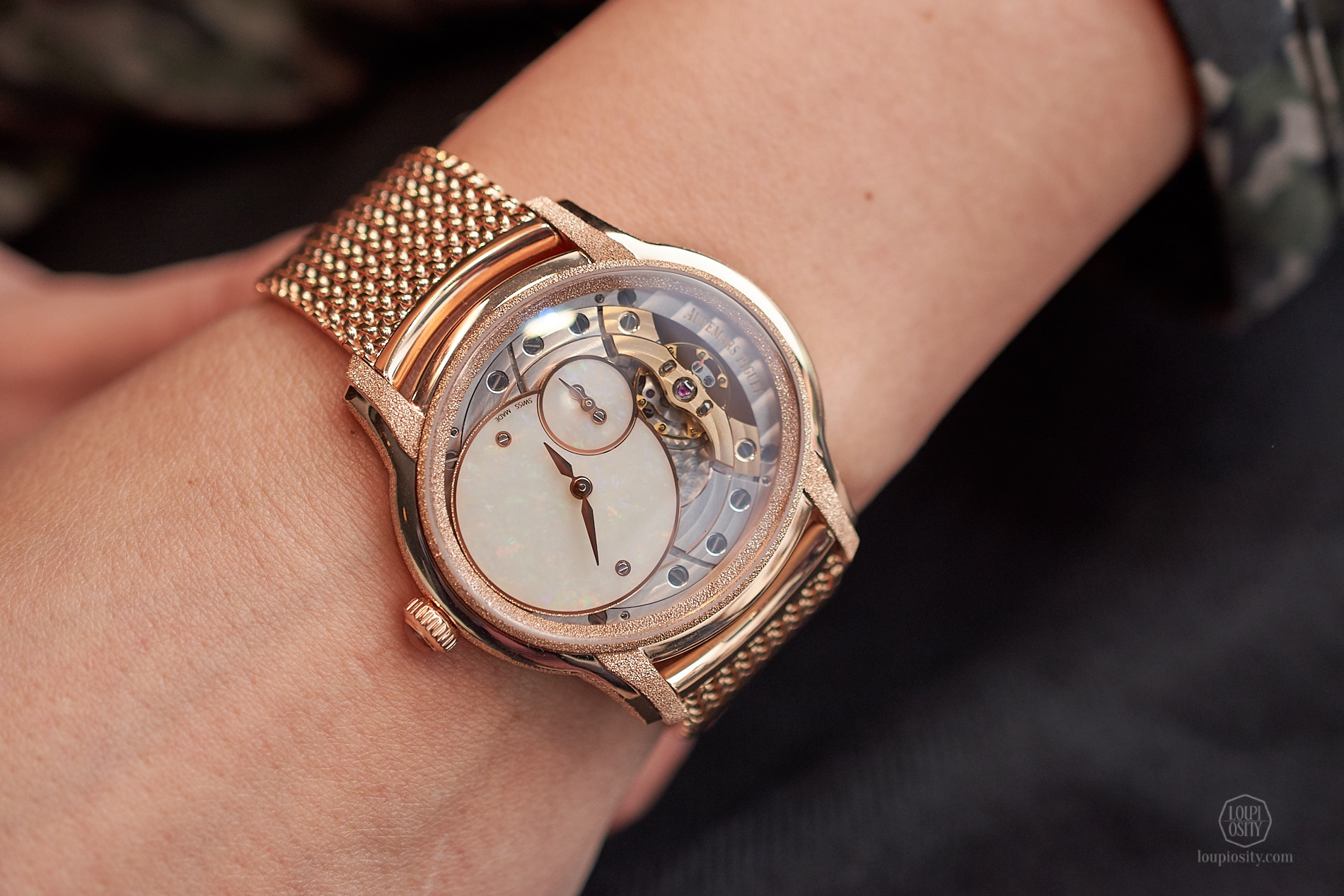 I guess it is fair to say that having Hermès in the house raises collective excitement and guarantees a good amount of fun, too. Genius designers with playfulness in their blood, such as Henri d’Origny have managed to smuggle a smile or two into any object the company creates. A scarf, a bag or a timepiece – they get you in the game and capture your heart.

This is what happened to me when the new chronograph of Hermès rode in the meeting room. The Arceau line (designed by Mr. d’Origny) received a new titanium timepiece with twisted numerals and rounded beadblasted edges. It is lightweight and the assymmetrical stirrup-inspired lugs make it even more pleasure to wear. The black embossed Barenia calfskin strap looks and feels perfect.

The swirling white numerals on the Galvanic black dial together with the rounded case and pushers ease the seriousness of the chronograph – I love this concept.

By the way, Hermès declared 2018 as the year of The Game. 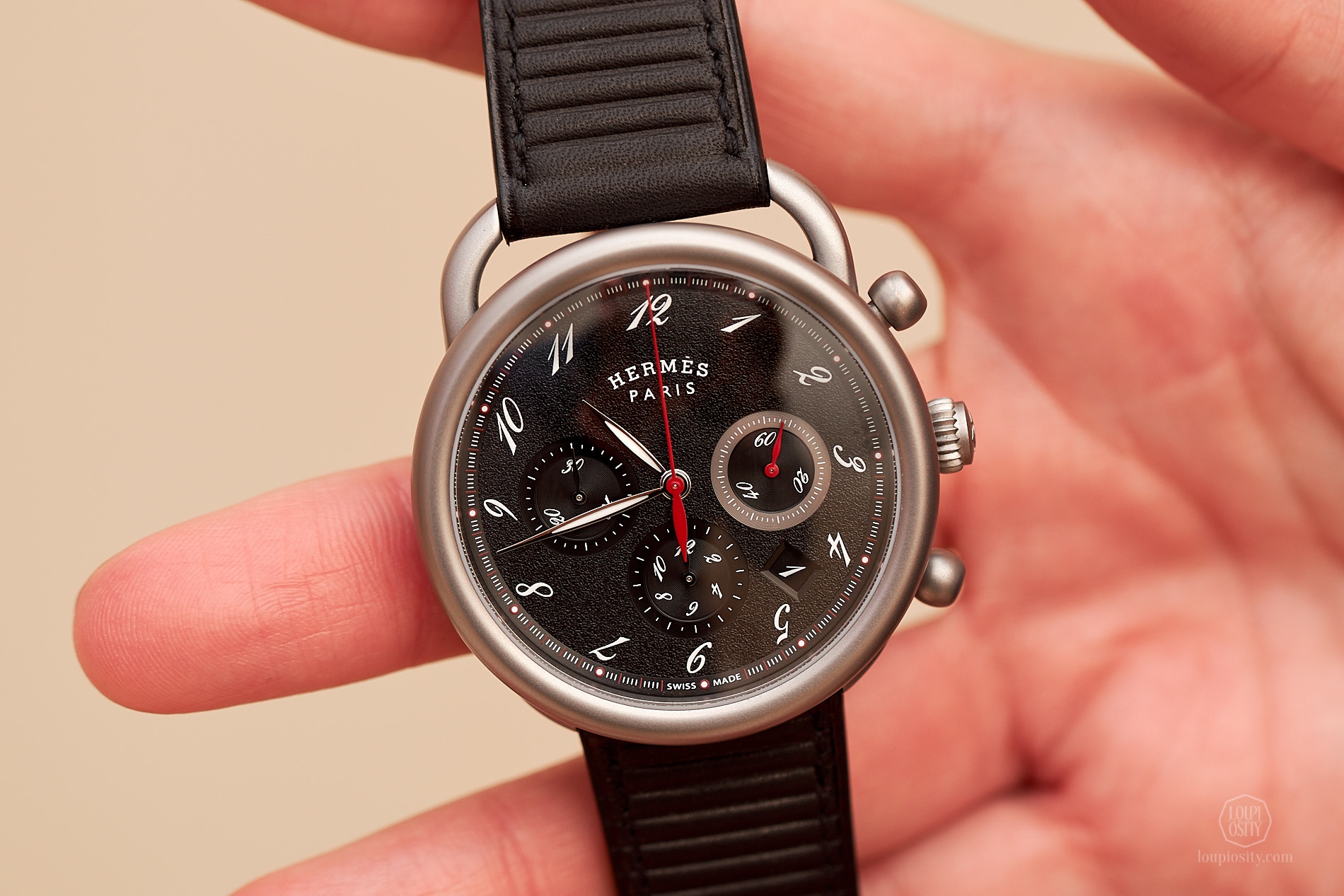 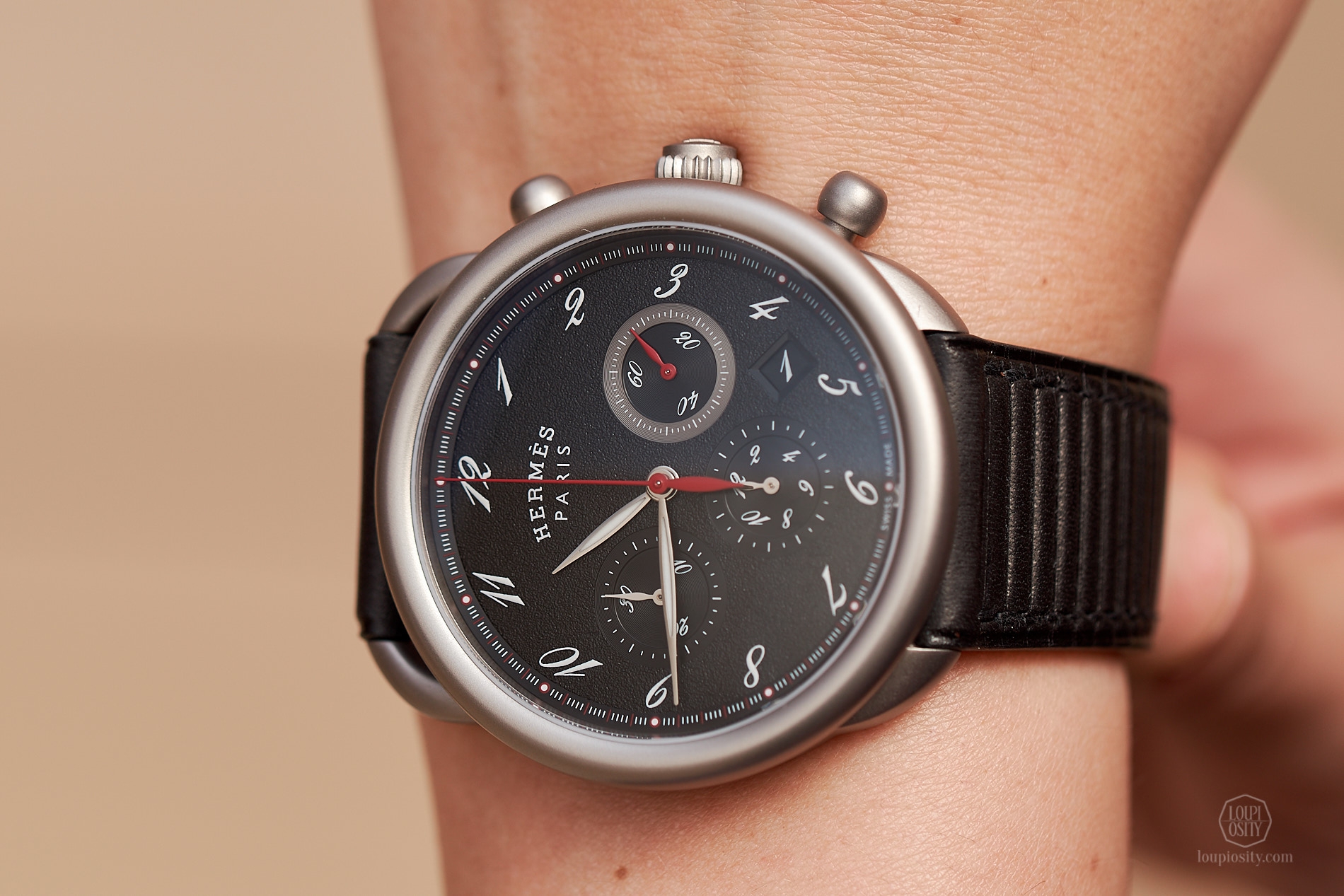 A total of 148 watches were on display during SIHH at Montblanc. The company presented new pieces from the 1858 Collection inspired by mountain exploration, the more classical Star Legacy and the racing infused TimeWalker watches.

The #SpiritofExploration permeates the 1858 Collection which include everyday watches with a touch of vintage look. The newly introduced 40mm steel-bronze Automatic with a fluted crown is a bit smaller and more sophisticated than the 2016 bronze editions. I guess, that’s why I like it so much. It is operated by the MB 24.15 4Hz calibre.

It comes with the option of a black or a smoked champagne dial. You have the choice of cognac-coloured, aged calf leather with beige stitching coming from the Montblanc Pelletteria (which based in Scandicci, in the outskirts of Florence) or high-quality black “NATO” strap. 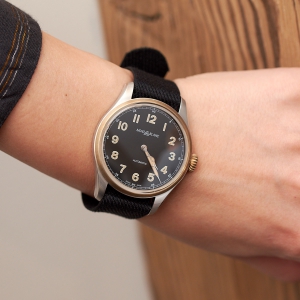 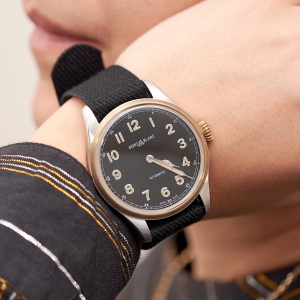 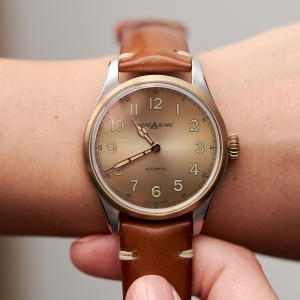 “To be lucky, you must believe in luck” – as Jacques Arpels liked to say. He was the nephew of Estelle Arpels, founder of the Maison with her husband Alfred Van Cleef. Jacques Arpel’s father was Julien Arpels, Estelle’s brother.

The first collection with one of the most emblematic motifs of Van Cleef & Arpels, the Alhambra, was made in 1968 and therefore it celebrates its 50th anniversary this year. It was inspired by the quatrefoil elements of Islamic palace in Andalusia (Granada, Spain) and by the shape of the four-leaf clovers. They were so popular that it soon became one of the icons of the jewellery house. The pieces are the jewellery representatives of a good luck charm said to bring love, health, fortune, and luck to its owner. The famous fans of Alhambra pieces included Princess Grace of Monaco, Françoise Hardy (French singer-songwriter) or Romy Schneider (German-French actress).

Throughout the years the Maison has been crafting these from precious materials, such as diamonds, turquoise, malachite, carnelian, mother-of-pearl or onyx.

A new watch appeared in the collection this year created from an alloy of gold, copper and silver unique to Van Cleef & Arpels. The models include versions with mother-of-pearl, lapis lazuli, malachite and my favourite, turquoise. 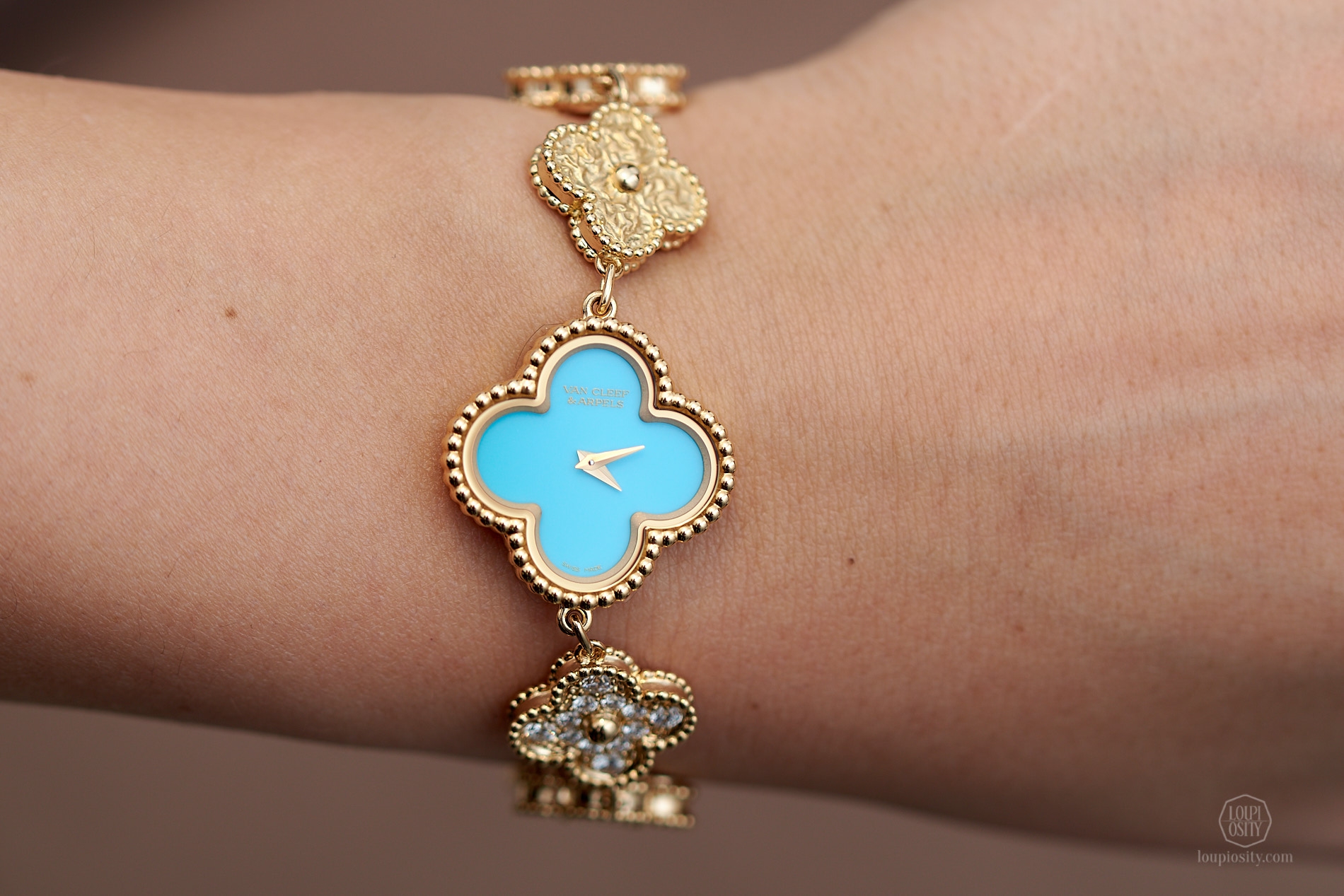 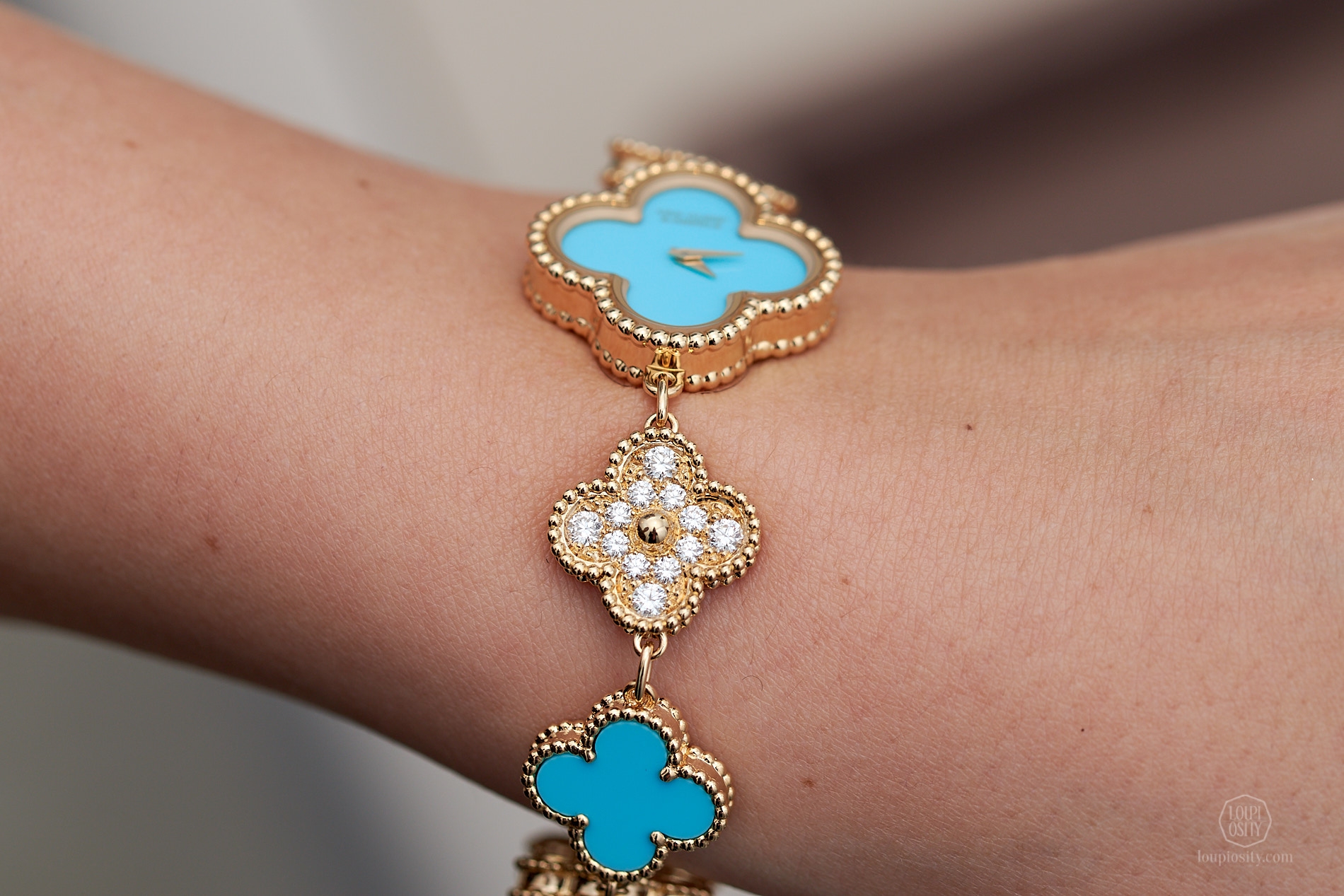 Girls don’t just wanna have fun – Vacheron Constantin, Part… In this series, we showcase mechanical and artistic wonders that were specially designed for women and others originally for men that come alive on spirited ladies’ wrists. Vacheron Constantin presented wonderful novelties to women at the online Watches and Wonders event in April. Finally, we were able to try them on.Breitling Chronomat for women We had the opportunity to preview the new Breitling Chronomat women watches in the Breitling boutique in Vienna.Zenith Watches & Women This October Zenith puts extra emphasis on women with two meaningful releases - the Chronomaster Original in a new version and the DEFY Midnight Pink Ribbon edition. Discover them with us.