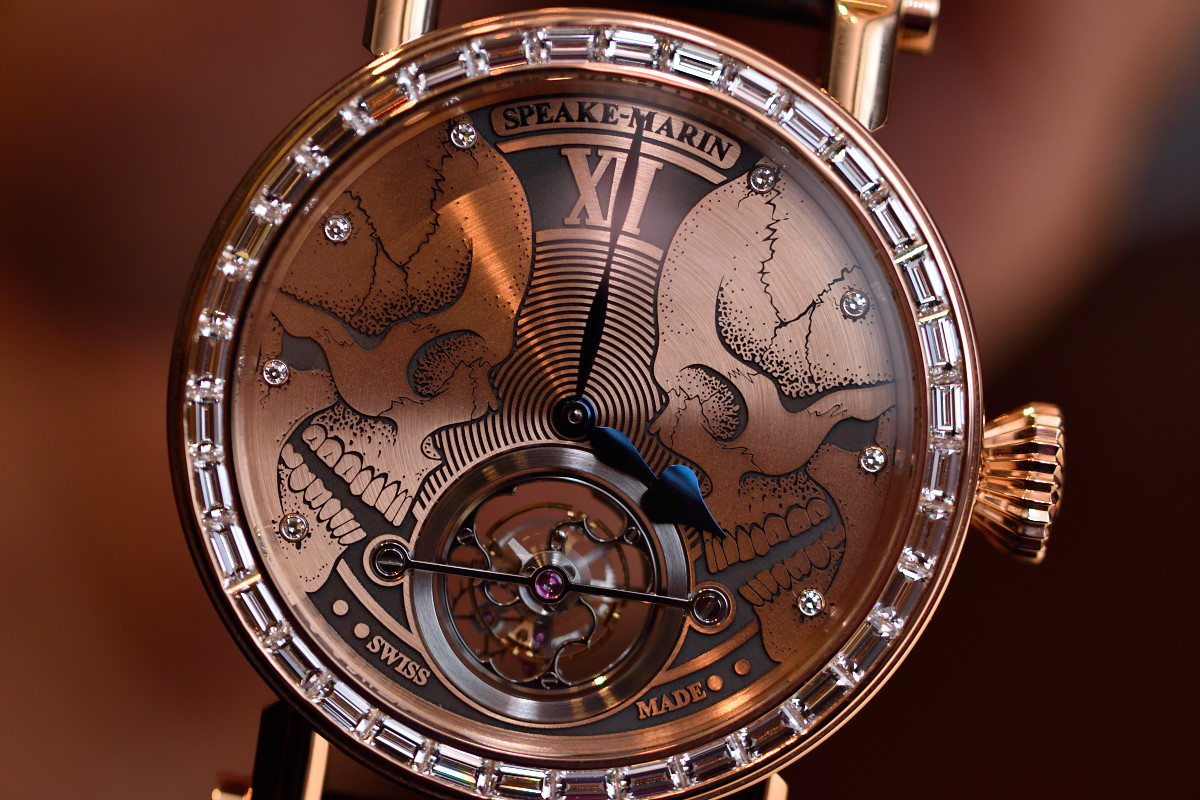 A few weeks ago I spent long minutes staring at a photo at the exhibition entitled, Vogue 100: A Century of Style at the National Portrait Gallery in London. It was a strange experience with thoughts zigzagging in all possible directions, leaving me speechless for that evening. Alexander McQueen and the skull that was to him a friend, fabric patterns and fate were smoking stolidly from the floor to the ceiling.

The unmistakable shape that used to be once the mind’s cage seems to carry a message even if no one inhabits it anymore. And so it does even if it never belonged to anyone, but was just painted somewhere – like on the scarves McQueen created. Or on the flags of pirate’s ships. Or if it’s sewed with a nail under the skin as a tattoo, they all talk.

The impact in the Museum was so intense (certainly thanks to Tim Walker whose lenses captured the moment forever) that I had to revisit them on the way out for some kind of weird goodbye.

Skulls have always accompanied the living one way or another. Times, cultures, locations, attitudes and circumstances have given the symbol a different meaning, but in most civilizations skulls have been messengers. They have helped the living to contact the dead and gods, they have provoked fear, signified danger or diseases, were reminders of mortality, underpinned wisdom and superiority over others. They appeared on paintings from the Venetians to the Dutch, or as a skull-watch, or on the shelves of healers – and who knows where poor William Shakespeare’s skull ended up now that it has proven to be missing from his grave at Holy Trinity Church, Stratford.

The reason why someone would wear a skull-figured accessory today could not be more diverse either. Peter Speake-Marin told me that for him the skull is a reminder to enjoy life, because it is short and you need to use it wisely. On a side-note, he seems to have taken it seriously and in the past two years he has managed to reset the balance again to his favour: more watchmaking, less administration.
He likes the skull motif and his Cabinet des Mystères has already hidden the Skull Mirror and the Face-to-Face timepieces. The new version introduced at Baselworld sits in a red gold Picadilly case, set with baguette diamonds around. The cracks on the skull motif as well as other details such as the hypnotic circles were created by a delicate chemical-etching technique in thin 1.0mm 18k gold. Each skull is set with 4-4 diamonds and they frame the tourbillon at 6 o’clock. 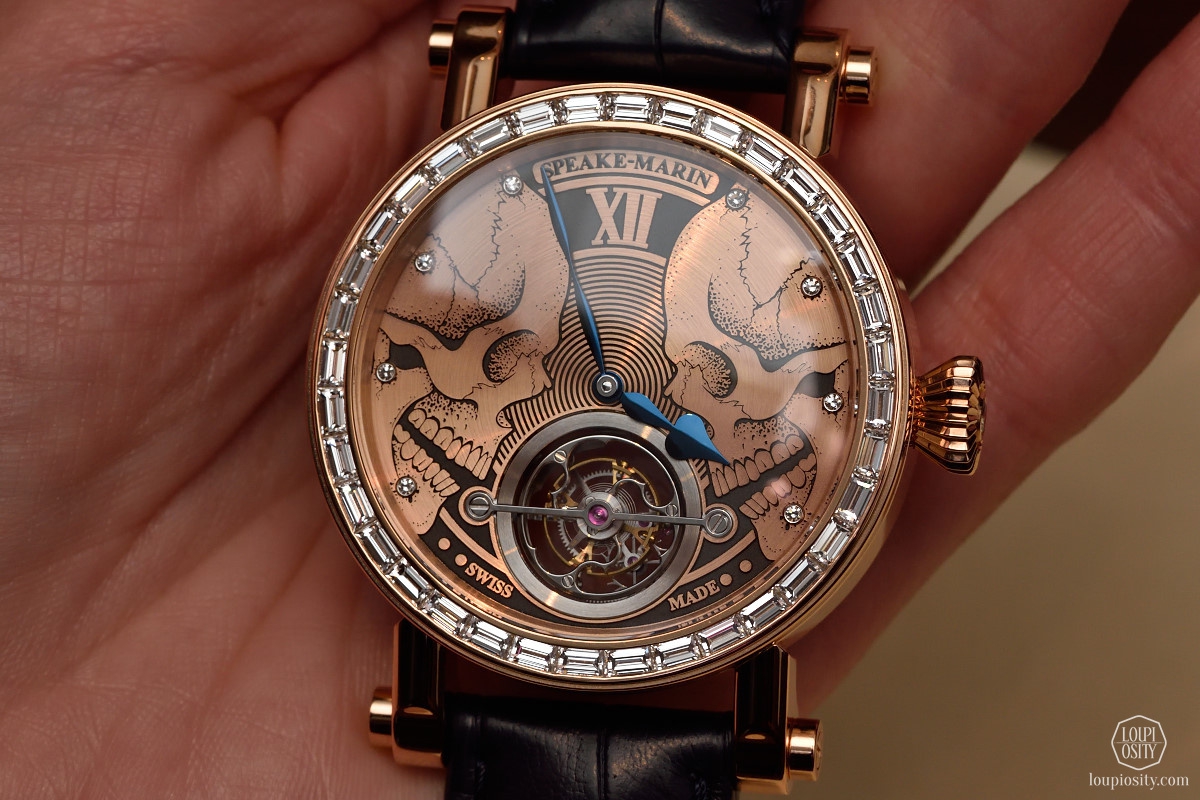 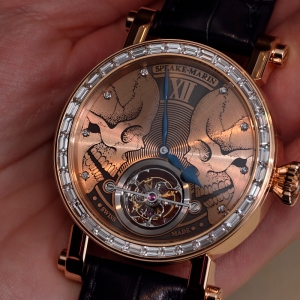 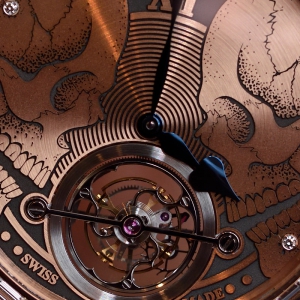 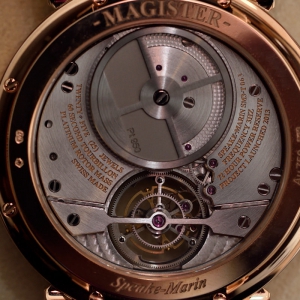 Watchmaking is a craft that requires long years of studying and practicing – just like in Peter Speake-Marin’s example. However, I always find it particularly interesting when someone who is an “outsider” brings whatever she or he has into a craft like this. These “disruptive” minds necessarily look at traditional watchmaking from another perspective. They originate from the seeds of a great idea and start to explore what it takes to realize it. Solution to obstacles on the way might be different due to the difference in the professional background or experiences, and lack of contacts or information. Whoever manages to keep up the courage and find supporters, could end up with the idea realized. Now, this does not mean that you made a fortune, in fact you can be closer to bankruptcy, but refreshing new concepts may be born out of these efforts.

Fiona Krüger applies fine arts on watchmaking and she has gone the hard way by building her own brand. Her taste is a mix of her Scottish roots and her Mexican years spiced with a touch of attraction to skulls, refined by her studies in Fine Arts and Design. In recent years she turned drawings into soulful working time-objects and she obtained supporters too, such as Peter Speake-Marin or José Arbona and Kari Voutilainen.

Her skull watches are a bit grotesque and expressive at the same time with a definite desire to communicate to people. She uses colours, engraving (done in Comblémine, the workshops of Mr. Arbona and Mr. Voutilainen), 3 dimensional layout and the infinite movement of watch parts to reflect and arouse emotions. Details, such as the cog-wheel on the forehead suggesting human intellect, or the shape of the cut-out on the back-head showcasing the “brain-work” of the rotor, make it lovable. 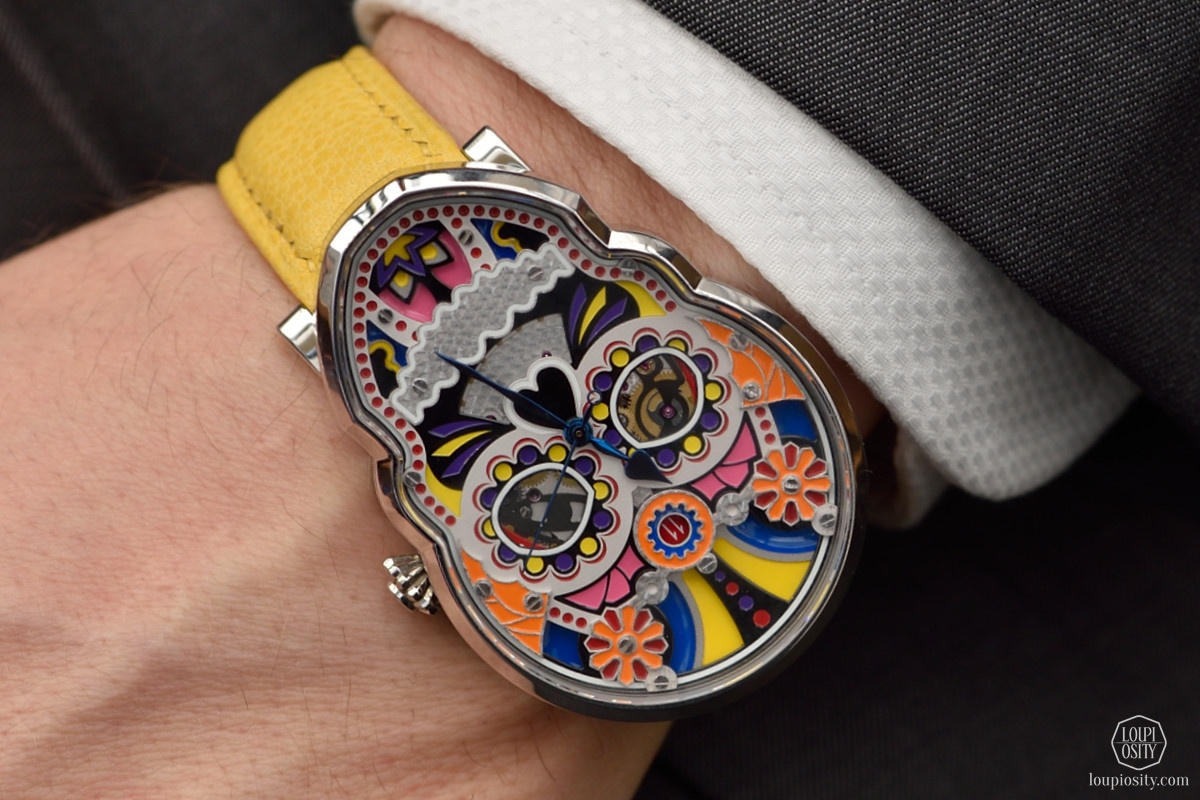 The Celebration Skull was inspired by the Día de los Muertos, a holiday renowned throughout Mexico. Its roots can be traced back to the pre-Columbian times in South Mexico. (Here is an interesting site you might want to visit if you are interested in the topic.) Seven colours have special meaning in the Mexican feast: blue-trust, yellow-death, purple-grief, red-life, white-purity, pink-celebration, orange-sun and black-mortality. These colours and typical shapes and patterns appear on the dial. The silhouette of the skull is painted with Superluminova to scare off your enemies.

The Petit Skull line currently has three stainless steel models: the Silver, Blue and Black, each a limited edition of 18 pieces. All have different “faces” due to the different guilloché patterns in the various areas, such as the “Ecailles de poisson”, “Soleil 24 Divisions” or “Traits droits en Soleil” guilloché. The patterns and their positions increase the three-dimensional effect of the jaw and the forehead. The moving balance wheel and the mainspring give “lively” eyes to the skull. The three models received matching hand-stitched salmon leather straps. 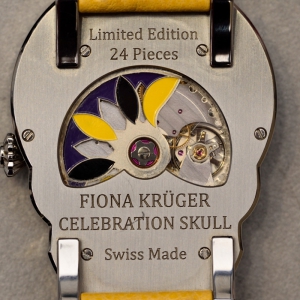 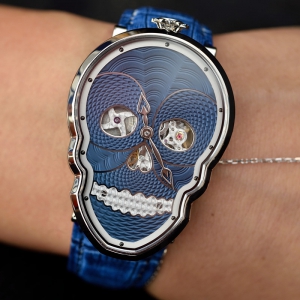 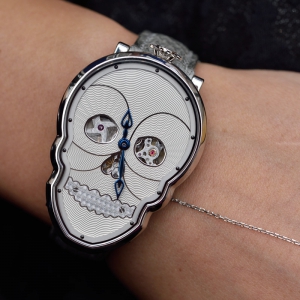 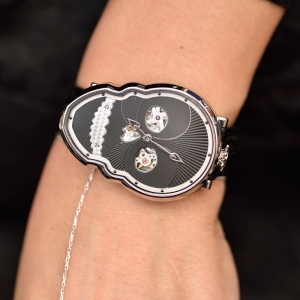 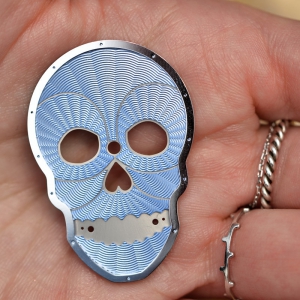 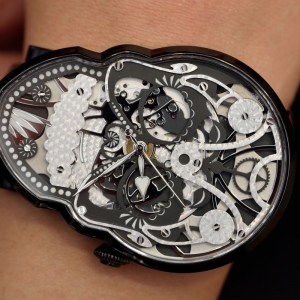 The complexity of the skull’s symbolism could not be conveyed more clearly than on the works of Fiona and Peter. They allow everyone to sit face-to-face with its own mirror image…and re-think.

…Something we all ought to do every now and then.

Cartier 'Rare Watches' exhibition in Geneva Cartier Geneva had a special treat for watch lovers last weekend - the Rare Watches Exhibition included more than 30 exciting timepieces at the La Résidence space in the Rue du Rhône boutique. The showcase was open to the public for just two days. We were lucky enough to browse around some amazing Cartier icons. YVES SAINT LAURENT AUX MUSÉES exhibitions This spring, six famous Parisian museums honour the 60th anniversary of the first Yves Saint Laurent runway show. Some of the special showcases at the Louvre and at the Musée Yves Saint Laurent Paris will remain open throughout the supper until mid-September 2022. Check out what’s inside.Zenith x Fusalp Zenith x Fusalp - two alpine stars came to together in Zurich to present their new collaboration, including two Zenith Defy Classic watches and a Fusalp clothing capsule collection.