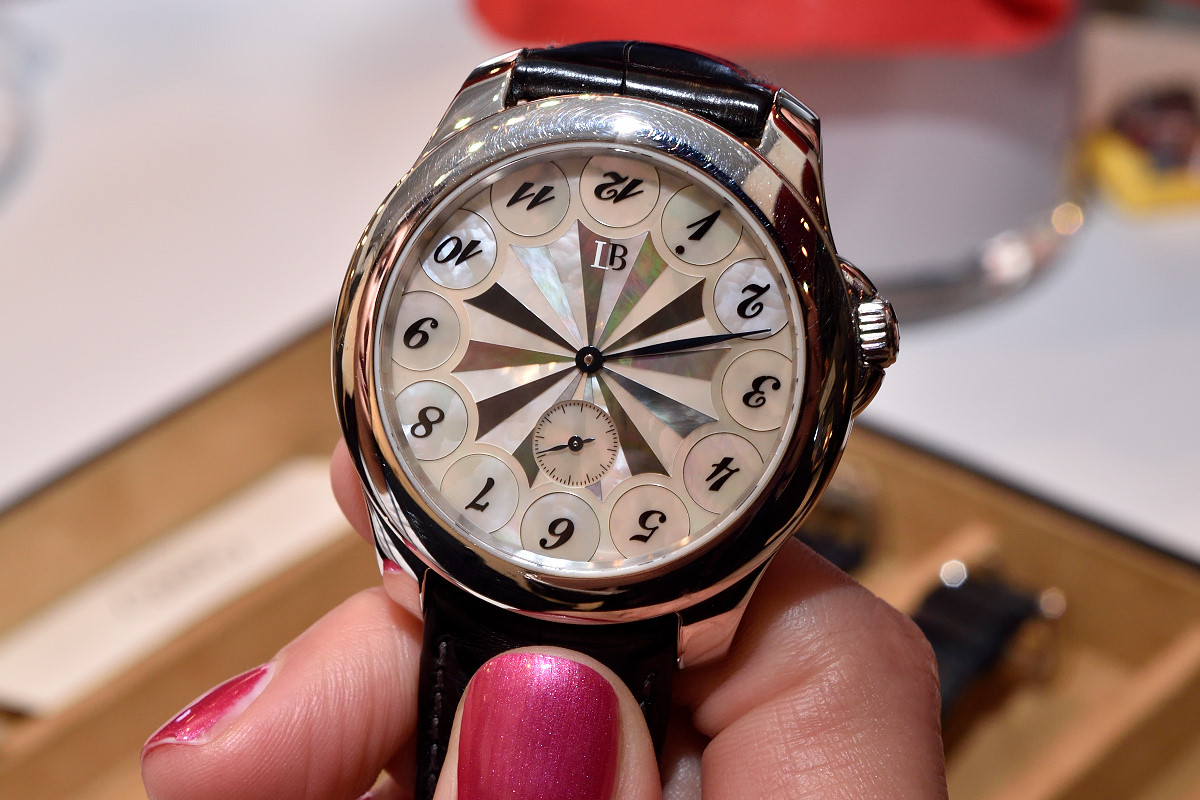 Like the crowd you see from your city office window standing at the traffic light during light rain – this is what I pictured immediately when I looked at the face of Ludovic Ballouard’s Upside Down. 12 guys surrounding one with an umbrella open, each turning one-by-one to have a private chat with the central figure. The play is cast in mother-of-pearl marquetry.
I loved this timepiece instantly – there’s some kind of humour in it, but still what’s inside is serious mechanics at its best.

Independent or niche brands offer unparalleled excitement for “haute horlogerie” freaks: being considerably smaller than their big brothers they have more personal relationships – AHCI has put it this way: “At the AHCI you can touch the watchmaker who makes your watch”. These ateliers want to be niche with the desire to grow limited sized, but loyal and zealous fan clubs.

AHCI (Academie Horlogere Des Createurs Independants) was started by Vincent Calabrese and Svend Andersen in 1985 (they celebrate their 30th anniversary this year) with the intent of preserving and encouraging the pure craft and highest level of creativity in mechanical watchmaking. As the name shows, the members of “Academie” are independent watchmakers, nominated and selected by the committee. The organization has external partners too, helping to promote independent fine watchmaking as well as deliver mentorship programmes for young talents.

The organisation introduced itself in 1986 at Baselworld. AHCI members have received 17 Grand Prix d’Horlogerie de Genève trophies altogether so far, including the Special Jury Prize for the AHCI’s outstanding contribution to fine watchmaking.

The contribution goes even further this year as the Académie together with F.P. Journe have partnered to launch the Young Talent Competition. They jointly offer watchmaking apprentices the opportunity to demonstrate their skills.

Since the launch AHCI has 35 members and 4 new candidates as of today (one of which is Eva Leube, the first lady in the gang). Another new entrant is Ludovic Ballouard.

Ludovic has French and Dutch origins, he was born in Brittany (France). Fascinated at an early age by small components he constructed model airplanes as a child. This hobby finally led him to watchmaking and he finished his schooling in Rennes. At the end of the nineties he moved to Geneva, to follow his passion in fine-watchmaking and ended up working for Franck Muller and F.P Journe.

In 2000 Mr. Journe began work on his sonnerie and Ludovic was also involved in the assembly of this piece. Grande sonnerie is a complication in a watch that strikes the hours and quarters in passing and repeats the hour at each quarter, which can triggered anytime on demand. Due to its complexity only a few brands create such sonneries today. The Sonnerie Souveraine won the Golden Hand Grand Prix at GPHG in 2006.

In 2009 Ludovic created his own company and the aforementioned Upside Down was his first timepiece in the brand. The model has various versions: case in platinum or red gold with different dials such as the special edition with “nacre marqueterie” (pearl marquetry). The Upside Down is a very elegant timepiece. It indicates the time with a jumping hour mechanism – the 12 numerals sit on 12 discs, every hour 1 right side up and the rest upside down. According to this album Count Philippe de Nicolay, director of Paris Orleans PA (a French investment bank belonging to the Rothschild family) received the initial piece. 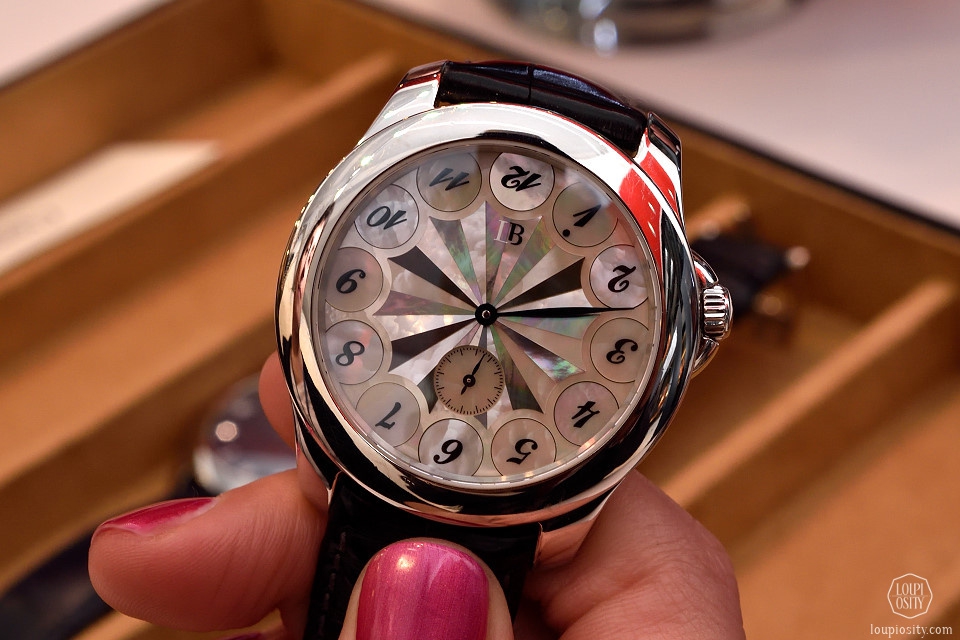 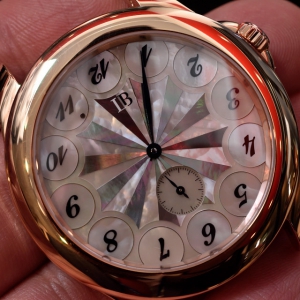 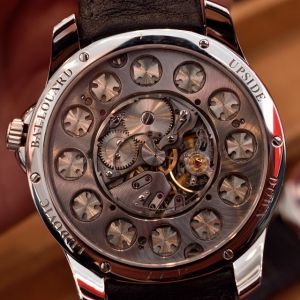 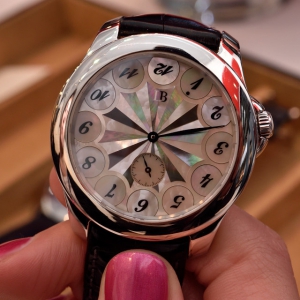 In 2012 Ludovic designed another model called Half Time and yet again played with the display. He placed the Roman hour numerals on two disks, by cutting them horizontally into two. One disk contains the upper halves of numbers, the other disk the lower. One rotates clockwise while the other anticlockwise. With the help of the special movement (including a patented mechanism designed to rotate the disks instantly) only the current hour is complete at the top, with minutes displayed on the bottom dial on an arc. The Half Time is available with Chinese markers too. 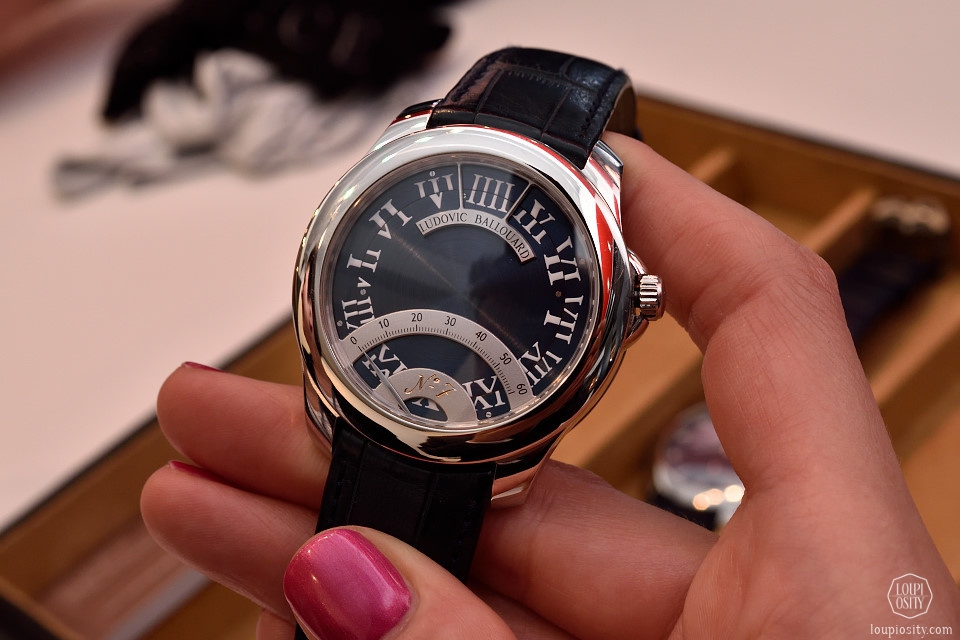 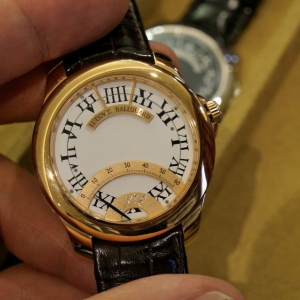 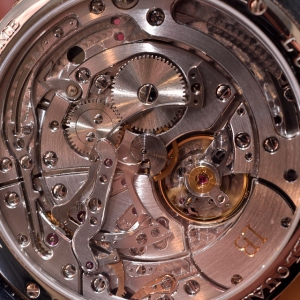 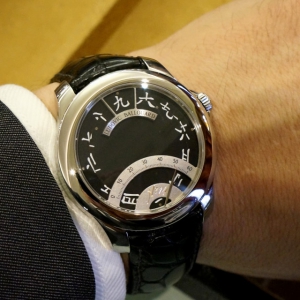 In 2013 he collaborated with Harry Winston on the Opus XIII. The mechanism is the result of a great creative journey of Ludovic. Fifty-nine pivoting minute hands, eleven rotating triangles for the hours and a sliding trapdoor perform a slightly psychedelic show where minutes and hours appear or vanish instantly to tell the time.

AHCI showcases itself and the work of the members at various shows. From 6th June to the 27th September 2015 you can meet them, including Ludovic Ballouard at the Musée international d’horlogerie in La Chaux-de-Fonds.