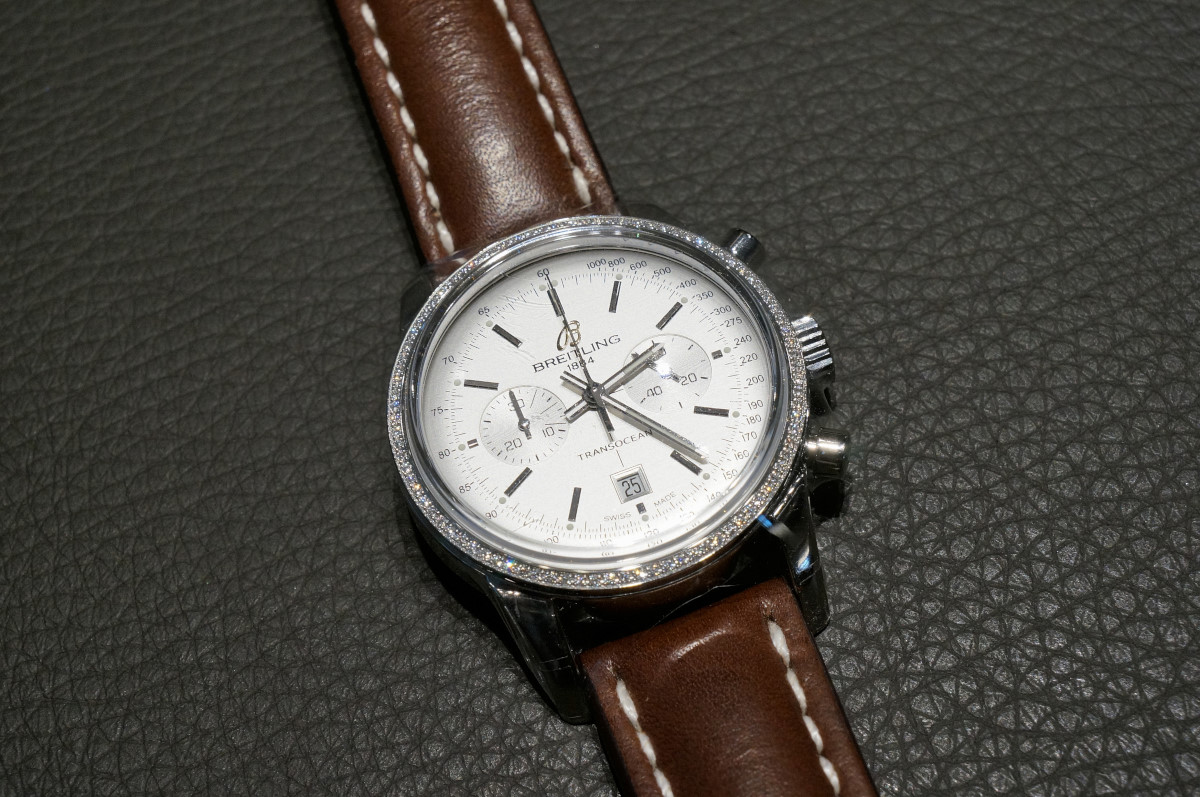 The watches of certain brands are instantly recognizable even from a distance and are prominent parts of the brand’s history, characterized by classic lines and balanced proportions. I have selected a few that fit this bill in this part of the Girls don’t just wanna have fun series.

At first glance the Breitling Transocean Chronograph is reminiscent of the chronographs of the 1950s and 60s, in a current, elegant and stylish interpretation. In addition to a self-winding mechanical movement the watch also carries a chronograph function: it measures 1/4th second, 30 minutes.  Breitling was among the first to develop the automatic chronograph in 1968 (they actually created the first independent chronograph push piece in 1915, and then perfected it in 1923 by separating the stop/start functions from that of resetting.)

A curiosity of the dial is the fact that instead of the winged Breitling logo used nowadays, it features the classic B initial. Without a shadow of doubt the timepiece has a vintage vibe; it evokes trans-Atlantic flights and distant lands for those women who can identify with a more adventurous lifestyle. 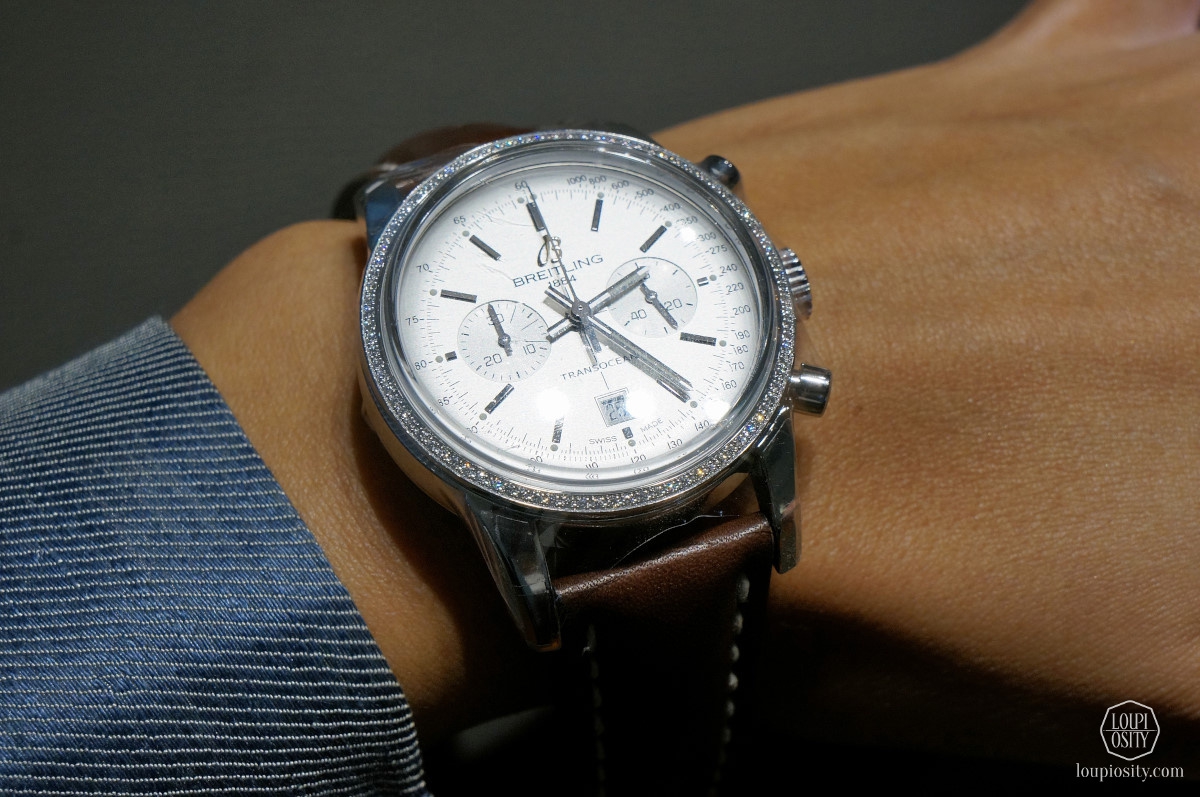 Everyone is familiar with Cartier’s Tank models. Louis Cartier created this watch in 1917, and gifted the first piece to American General Pershing, who was the general officer leading the American Expeditionary Forces in World War I.  It soon became immensely popular. Several versions have been made since then, for example the Tank Américaine or the Tank Française. The Tank Anglaise is also a re-thought version of the original Tank model, having the winding mechanism seamlessly incorporated into the case. The ladies model also has several variants, pictured is a white gold version set with diamonds on both sides, with a silvered and lacquered flinqué dial (flinqué is a unique engraving technique, whereby intersecting straight or wavy lines are created on the metal). Naturally the medium-sized women’s Tank Anglaise features a self-winding mechanical movement (caliber Cartier 077), but the essence of this piece is still the characteristic exterior of the watch.

The Tank is so iconic that to quote Andy Warhol: “I don’t wear a Tank watch to tell the time. Actually I never even wind it. I wear a Tank because it is the watch to wear!” 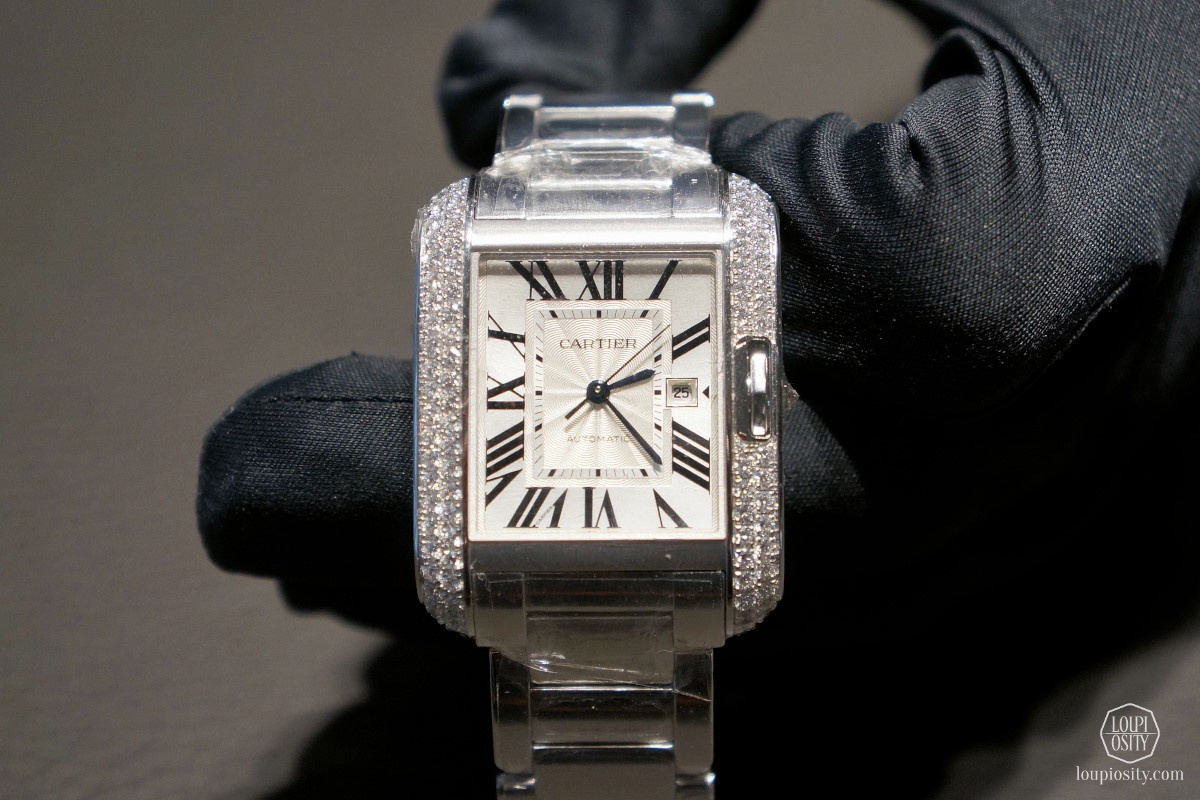 There’s a brand whose every single creation makes me think that they are so ethereal as if the entire piece had been painted with a fine brush. I love the clean, far from ostentatious, yet characteristic lines of Jaquet Droz, that make every piece unmistakable from other brands. This year the Maison presented a very feminine series in Basel, the Lady 8. In the case of the Lady 8, the brand’s traditional figure 8 is reflected in the shape of the watch and not on the dial. Here I would like to introduce a watch with a slightly larger diameter (39mm) that evokes the classic Jaquet Droz models: the Grande Seconde Circled from the Legend Geneva collection. The Legend Geneva was inspired by an 18th century pocket watch, the result is a beautifully designed sophisticated timepiece with self-winding mechanical movement, double barrel, and 22-carat white gold oscillating weight.  The dial is white mother of pearl, set with diamonds all around, and the sub-dials (hours and minutes-, large seconds sub-dial) in the shape of 8 are also set with diamonds. The concept and the visual image of this watch is dedicated to elegant, high minded and sophisticated connoisseurs. 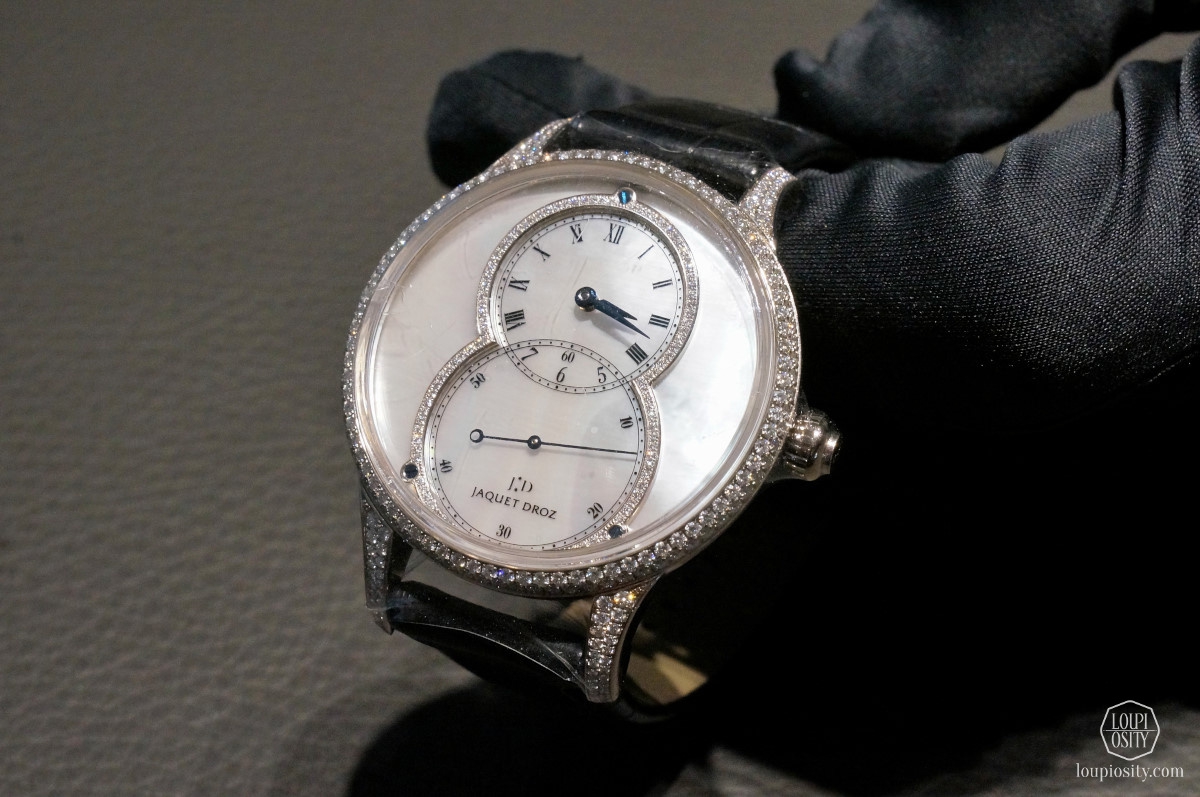 “To break the rules, you must first master them” –is how Audemars Piguet characterizes the Royal Oak collection, and rightly so.  In 1972 they astonished the industry with the series named after the ships of the British Royal Navy.  It was not only the size that was far larger than what was in vogue at the time, but the models also came in an unusual shape.  The main characteristics include a hexagon-shaped case and eight hexagon screws, a tapisserie-patterned dial (“Grand Tapisserie“) and deeply bevelled edges. The self-winding, pink gold ladies model is 26.6mm in diameter but is just as effective and is a true signature piece like the men’s version. It is a real statement watch. 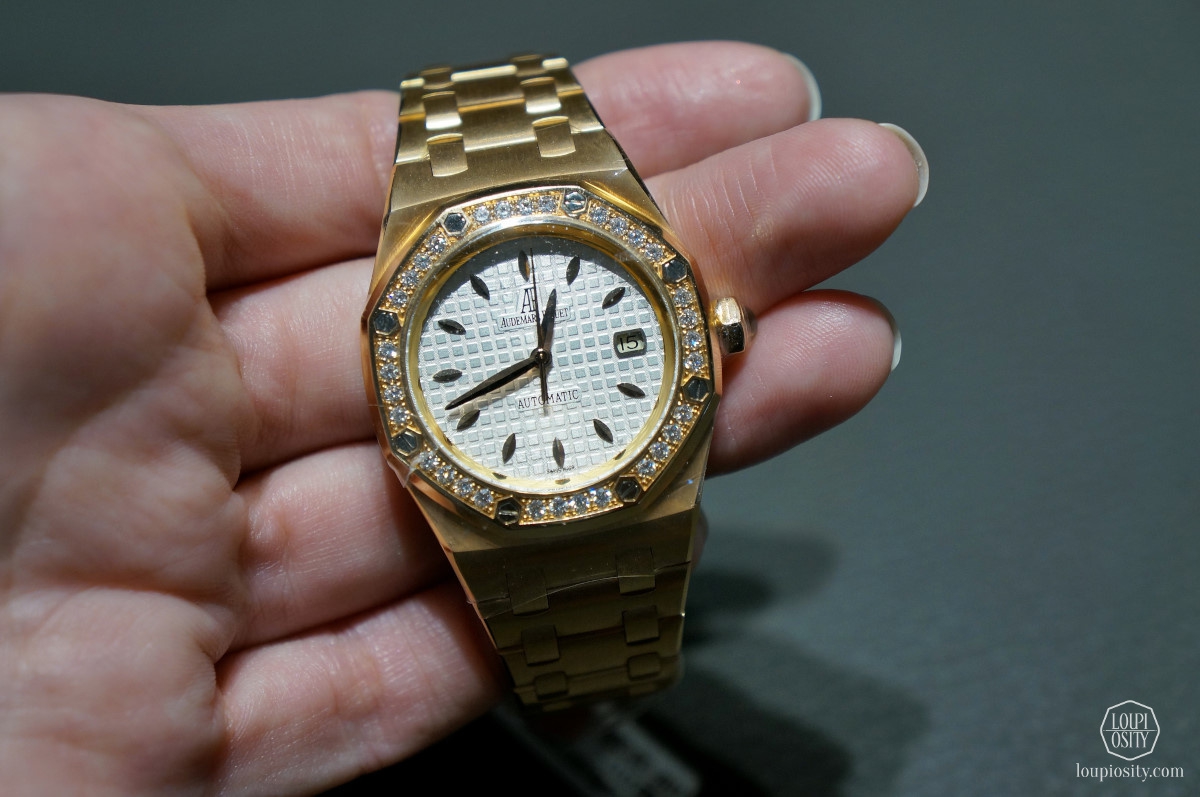 Following years of research the Bovet manufacture introduced the Amadeo convertible case in 2010. The essence of the mechanical solution is that with a simple motion the piece can be turned into a pocket watch or even a table clock, moreover ladies can wear it around their necks on a chain. Certain items from the Fleurier collection can be worn on both sides (the time can be read from the reverse side too) by turning the straps around. This 18K red gold version of the Amadeo Fleurier 39 is nobly simple, only the power reserve indicator and the sub-seconds dial are visible on the white mother of pearl dial featuring Roman numerals. 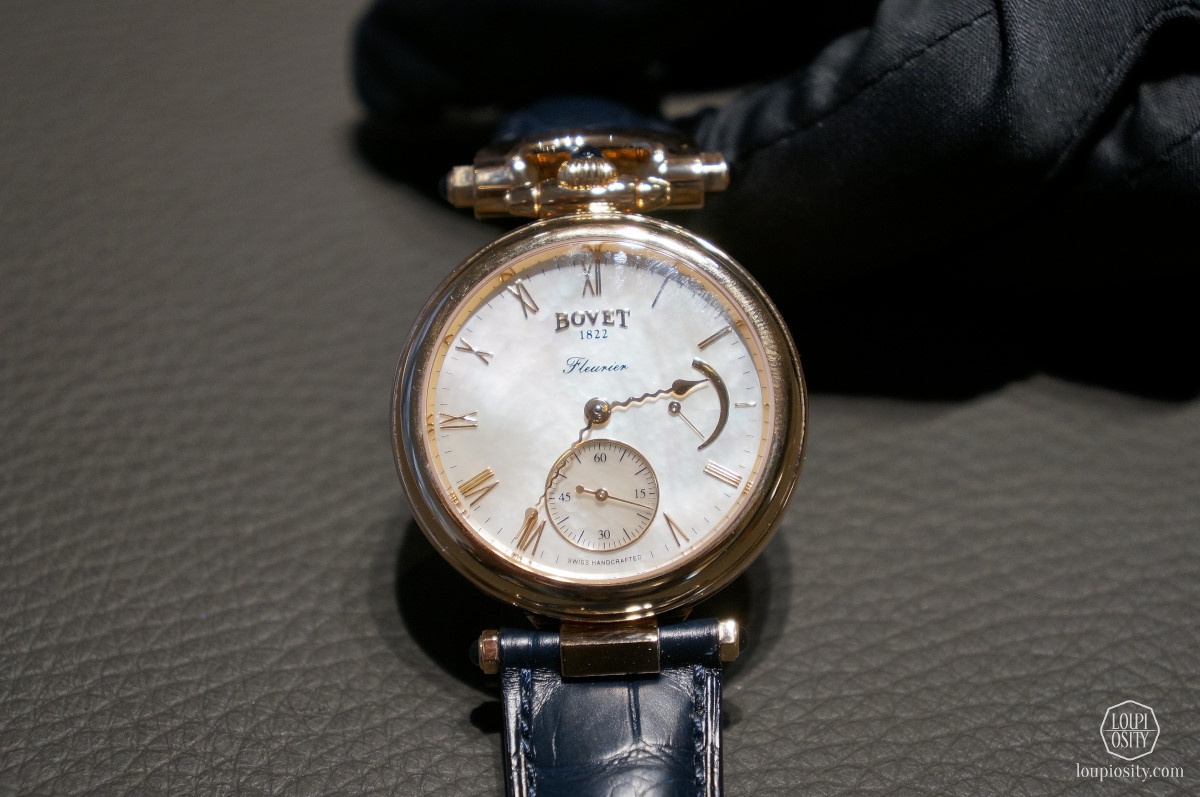 I appreciate the professional guidance of Les Ambassadeurs in making this series happen. Thank you gentlemen!
Photo credits: Loupiosity.com.
All registered trademarks are property of their respective owners.
All rights reserved.

Breitling Chronomat for women We had the opportunity to preview the new Breitling Chronomat women watches in the Breitling boutique in Vienna.Breitling Superocean Heritage ’57 Pastel Paradise Capsule… Breitling wants us to finally enjoy a colorful life and summer - this June the brand launched the Superocean Heritage ’57 Pastel Paradise Capsule Collection for women.Live. Play. Repeat - Breitling Endurance Pro At the start of the Geneva Watch Days, Breitling organised launch events to introduce their Endurance Pro line at the Four Seasons Geneva.