Posted by Eszter on 4th October 2022 in Events
Tags: EBEL 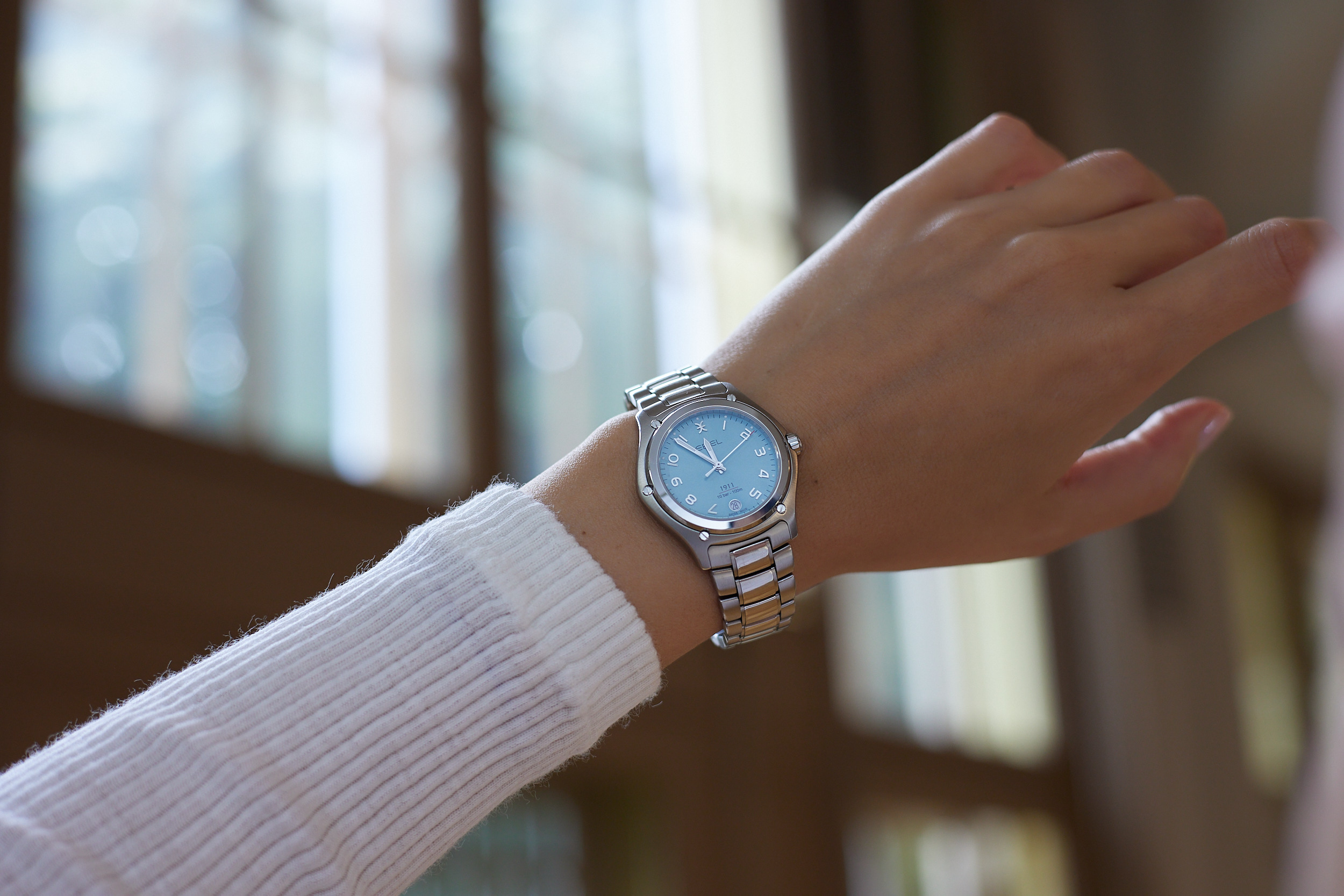 At the end of September EBEL relaunched the EBEL 1911 collection in the gorgeous Villa Turque in La Chaux-de-Fonds. We visited the Villa for the first time – follow us along to discover EBEL and the iconic building.

Throughout its 111 years of existence, EBEL has had a mix of highly successful and pathfinding times. The manufacture was founded in La Chaux-de-Fonds 1911 by Eugène Blum and Alice Lévy and the brand name is an acronym for ‘Eugène Blum Et Alice Lévy’. Alice was responsible for the design and aesthetic, Eugène as a watchmaker for the technical developments. Throughout the years EBEL became one of most popular choices for women – thanks to the interesting but sophisticated design and reliable movements. The company received the gold medal at the Swiss National Exhibition in Bern for its patented ring watches in 1914. Ebel was also awarded with the ‘Diplôme commémoratif de Grand Prix’ for jewellery watches presented at the International Decorative Arts Exhibition in Paris in 1925.

Their son, Charles Blum took over the management of the company in 1929. He expanded the sales network and during the years of the economic depression supplied bigger watch companies with calibres. During the quartz-crisis in the ‘70s, one of Charles’ sons Pierre-Alain Blum was in charge. He started to develop and manufacture quartz movements, which not only made their way into the EBEL timepieces, but helped him secure a contract with Cartier in 1975. Through a joint venture, they produced the les Must de Cartier-line, which became highly successful. The deal gave EBEL the resources to expand its own collection and they introduced the Sport Classic line in 1977 with the now emblematic ‘wave’ bracelet. From the tennis court to race tracks and TV shows, celebrities including Boris Becker, Stefan Edberg, Yannick Noah, Alain Prost and Don Johnson wore EBEL pieces. With great intuition once again, Pierre-Alain Blum approached Zenith for the El Primero Cal400 movements (an old uncased stock) to bring his EBEL Sport Classic Chronograph automatic to market in 1986. The watch became an object of desire on Don Johnson as James ‘Sonny’ Crockett in the Miami Vice TV series (together with its wearer).

1986 was an important year from another perspective too. EBEL was celebrating its 75th anniversary and for this reason they launched the 1911 model in the Sports Classic family and nested in a newly acquired historic building, Le Corbusier’s Villa Turque in La Chaux-de-Fonds (more on that later).

The story turned rather chaotic in 1995, when Pierre-Alain Blum sold the family company to the Bahrain-based investment group Investcorp. The move was unrelated to EBEL’s performance, but more due to unwanted twists of other ventures he pursued. In 1999, EBEL changed ownership again and was acquired by the French luxury concern LVMH, who finally sold it to the Movado Group Inc. in 2004.

Flavio Pellegrini, President & Managing Director of EBEL (and another MGI Group company Concorde) has been working to shine the old light of the brand in the new age. He has headed EBEL since 2014 in the Middle East, the Middle East and India since 2016 and EMEA since 2020. Mr. Pellegrini is keen to establish a coherent vision and brand strategy with his team – well defined products in comprehensible collections; clear target segments and delivering articulate messages about the brand which are true to EBEL’s heritage but contemporary at the same time.

In 2017, EBEL relaunched the Sports Classic collection with the distinctive and really flexible wave bracelet. This autumn, the 1911 line returned with new quartz models and an automatic marine-inspired model. 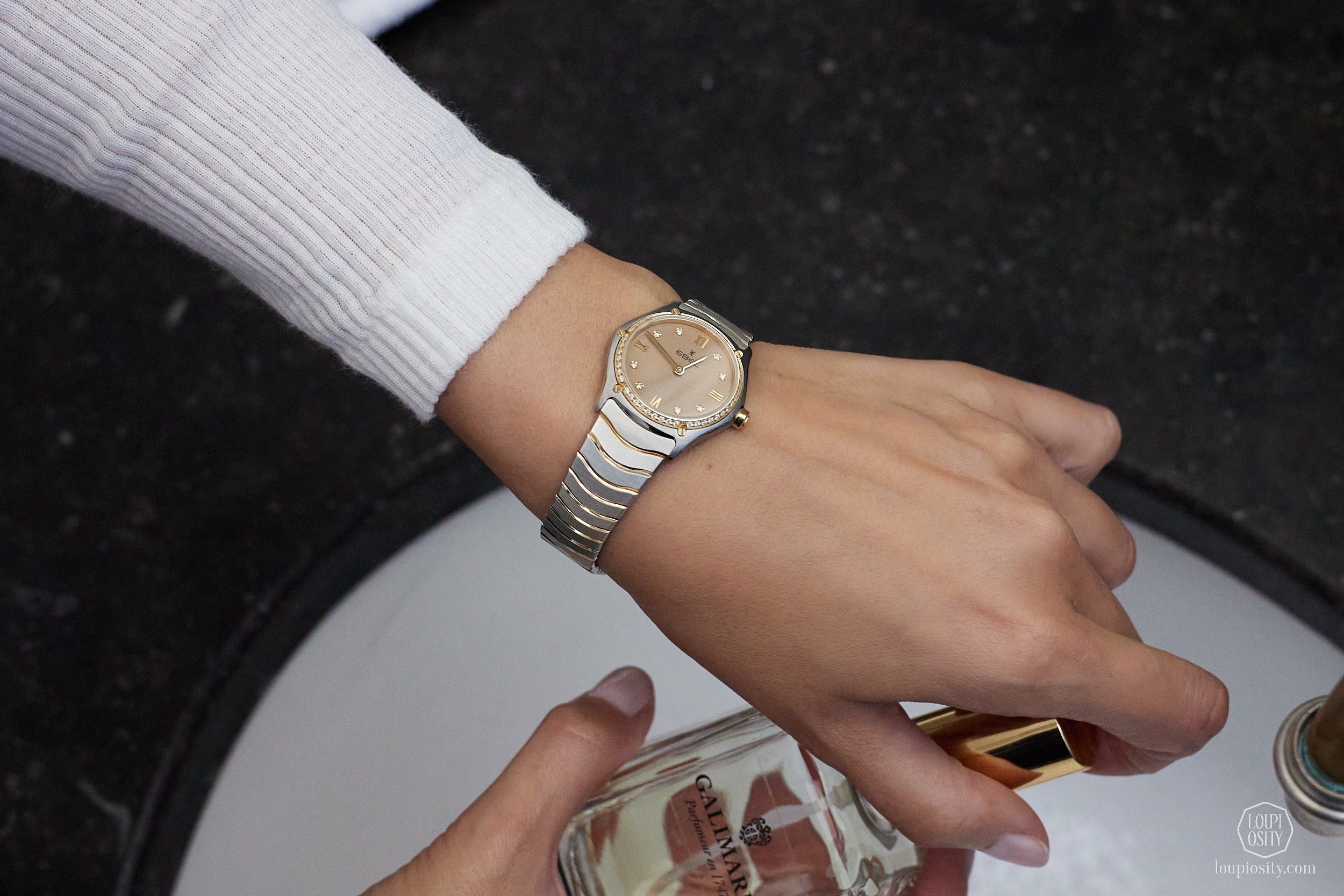 Novelties in the relaunched 1911 collection

The EBEL Wave collection is already known for its sleek and sophisticated lines, great wearability and classic look.

The just re-launched 1911 line keeps the classy style but brings in a slightly sportier design – the most important visual codes are the hexagonal case shape, balanced proportions and the integrated five-link metallic bracelet, which is – similarly to the EBEL Wave strap – pretty smooth and comfortable due to the smaller and more rounded links compared to many other brands’ metal bracelets.

We tried on different models from the collection; my favourite was the full stainless steel 34mm.

EBEL 1911 Grande with radiant blue or lively green galvanic dials. The rhodium-plated Arabic numerals and the manufacture symbol ‘kissing E’ are applied on the dial, giving a nice shiny contrast to the colours. You can find a round date window at 6 o’clock. The brushed and polished stainless steel bracelet is changeable without tools for a fabric strap made from up-cycled ocean-bound plastic and cork. EBEL is working with #tide, the company creating the ‘tide ocean material’, a premium quality recycled plastic made of 100% ocean-bound plastic. 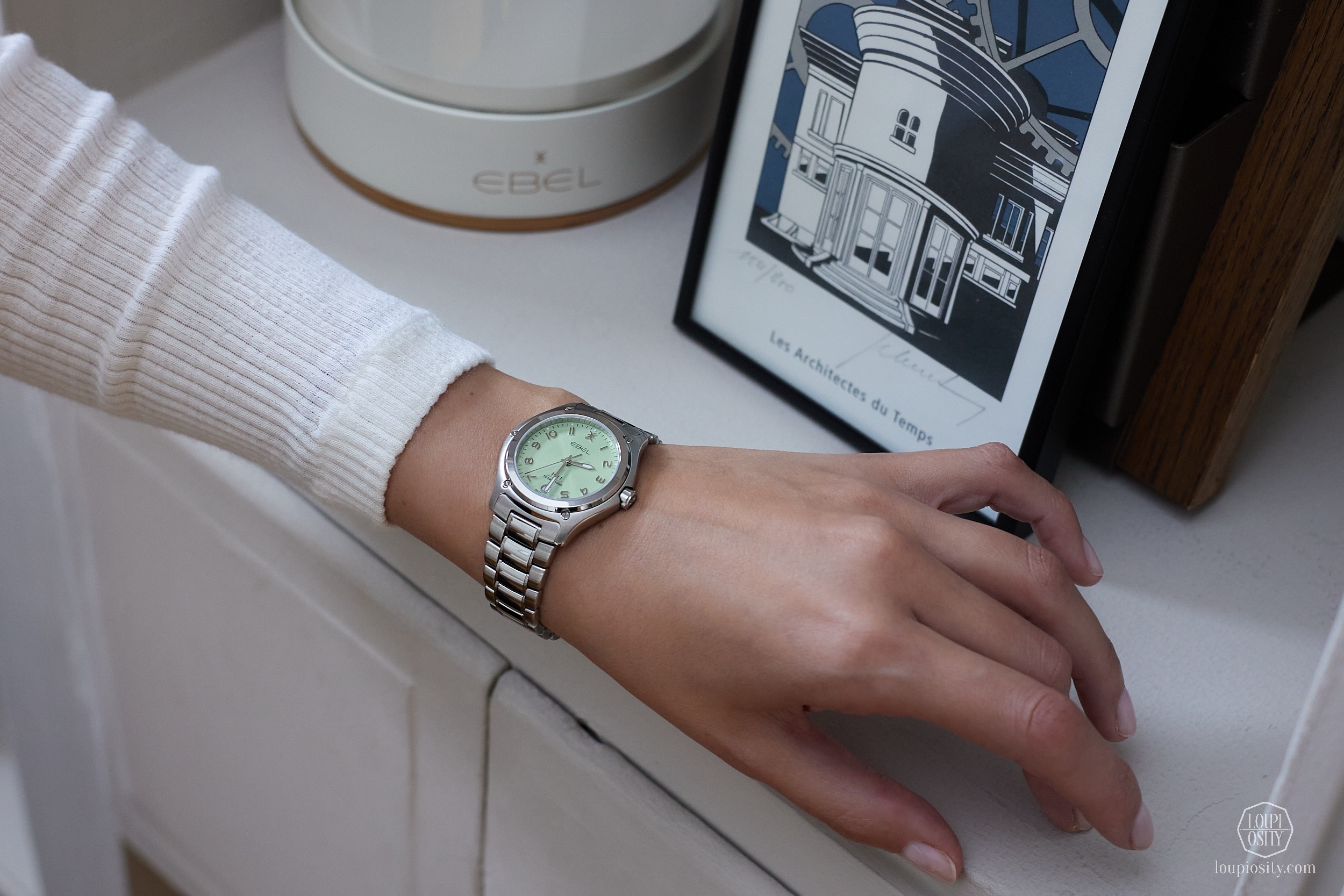 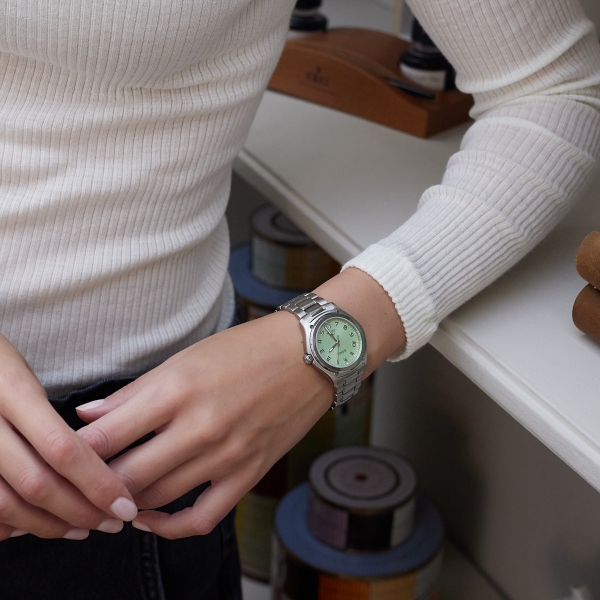 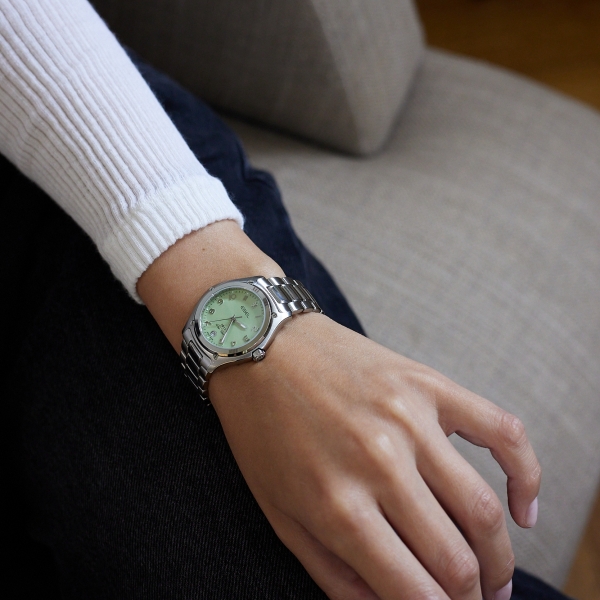 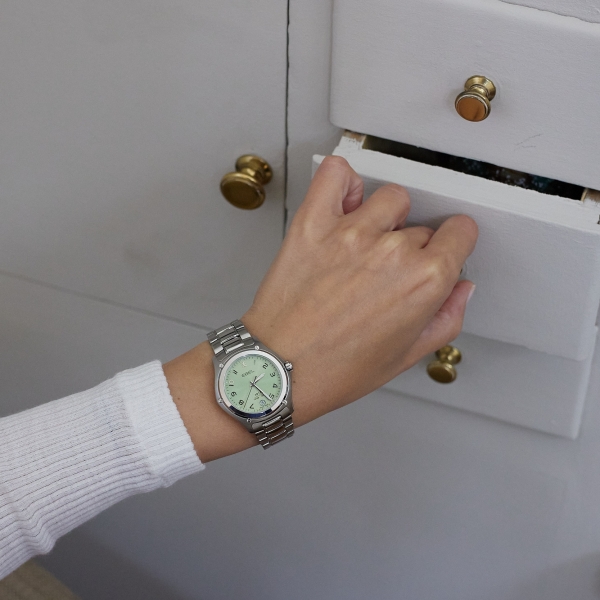 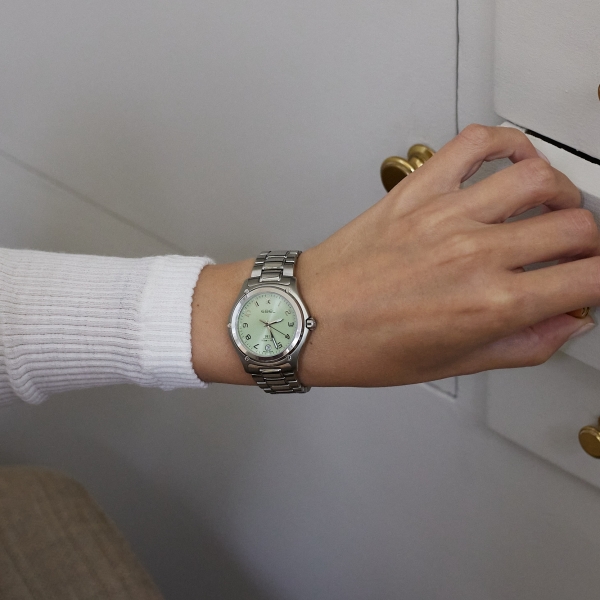 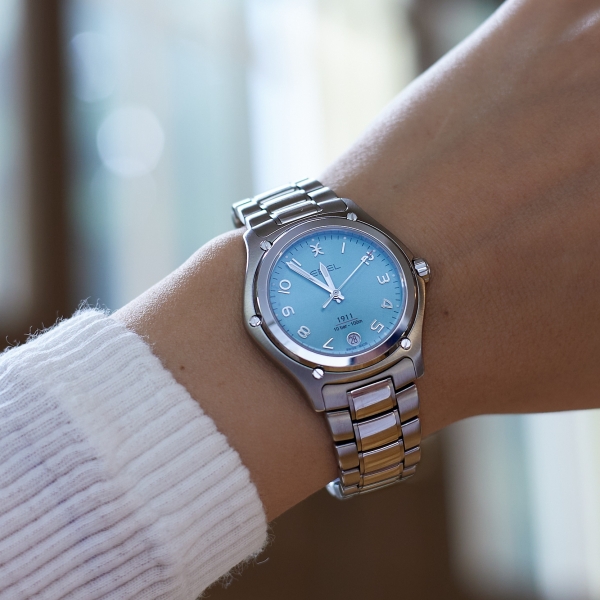 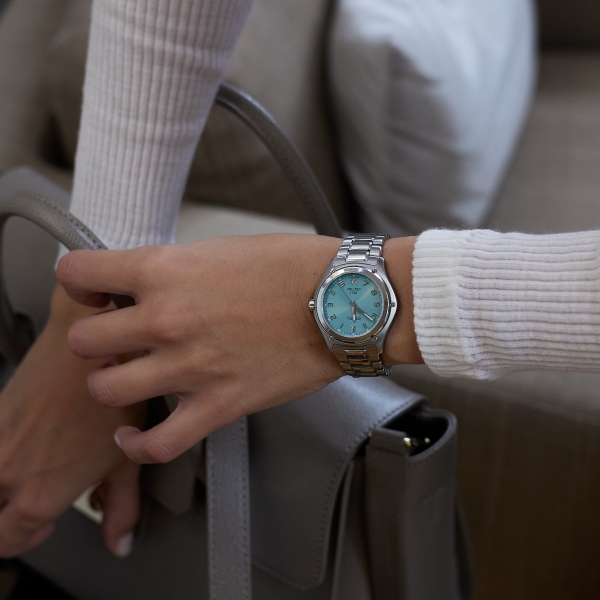 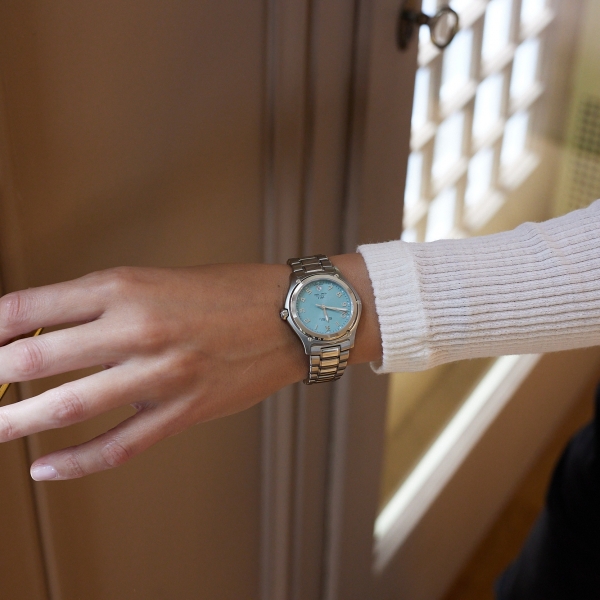 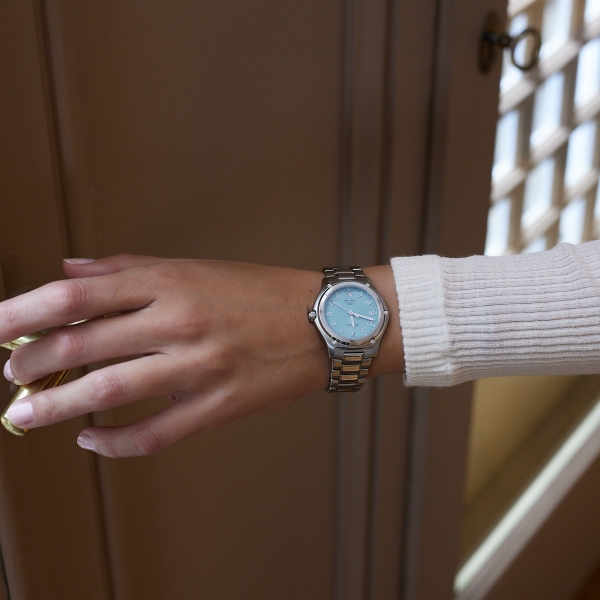 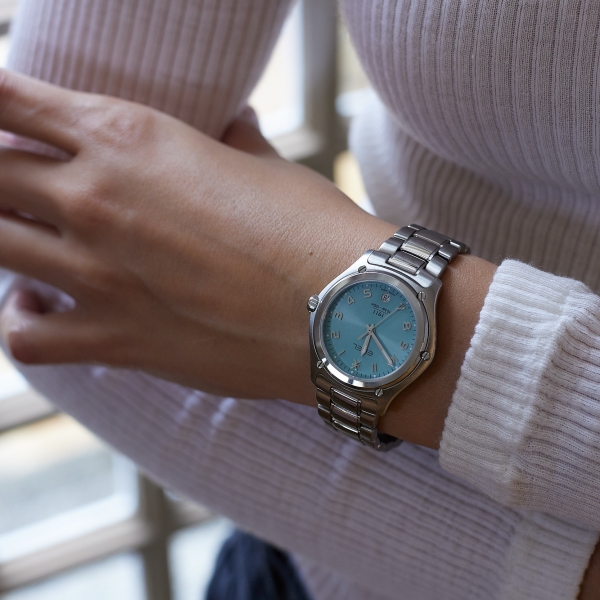 Of course EBEL catered to the brilliance lovers as well – the 1911 line has steel and yellow gold bi-metal versions with different mother-of-pearl dials, diamond hour markers or even with a diamond-set bezel. 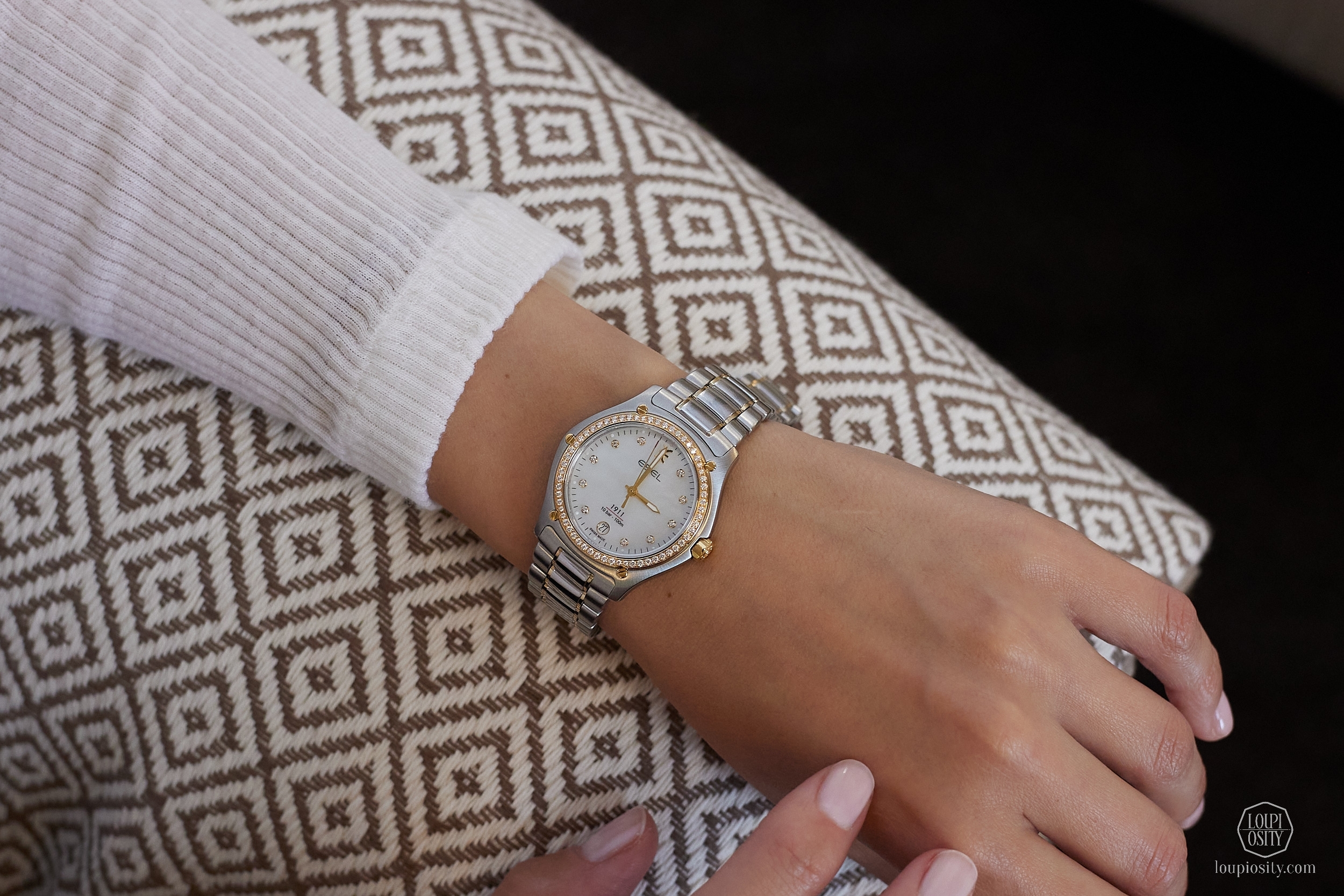 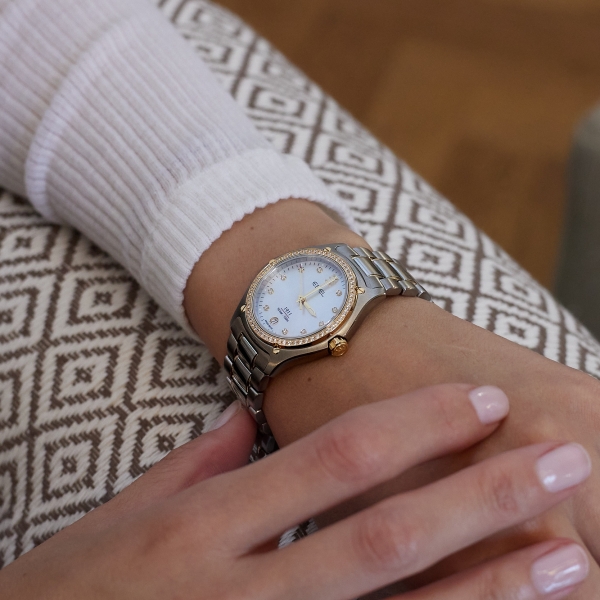 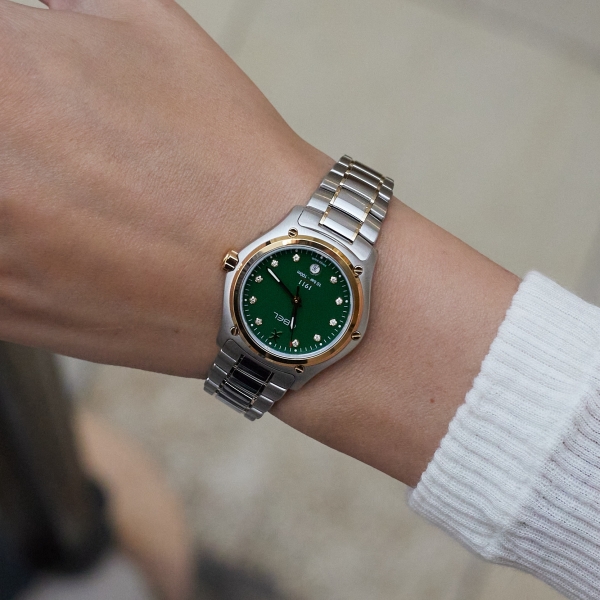 The new 42mm steel EBEL 1911 Marine edition has a galvanic black dial and a unidirectional rotating bezel with black aluminium ring. The model has an automatic movement, the Sellita SW300-1 working at 4Hz with 42 hours of power reserve. The 1911 Marine also has an interchangeable bracelet, you can opt for the black fabric strap made from up-cycled ocean plastic during your water sports too – the watch conforms to the 20 ATM / 200m water resistance. 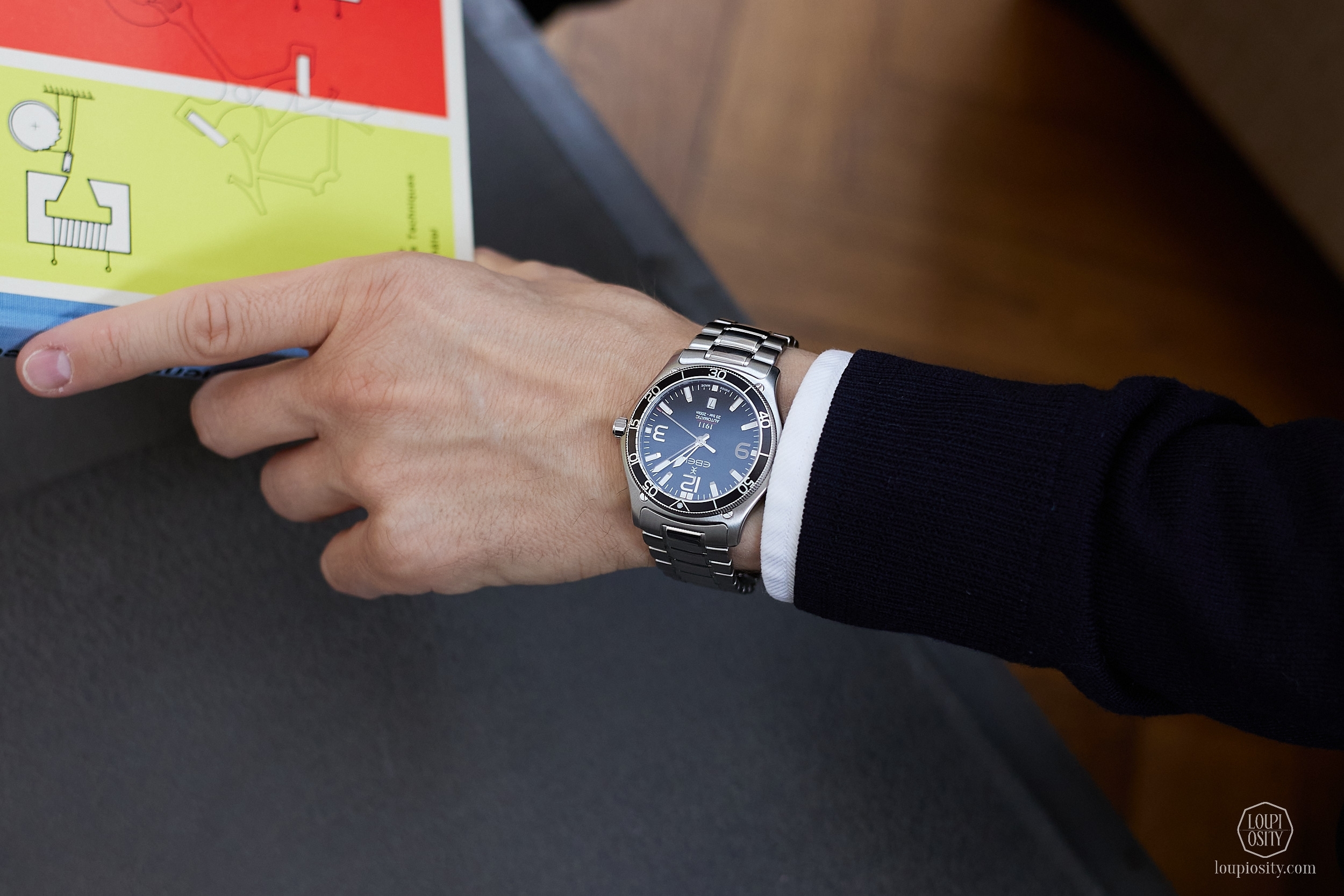 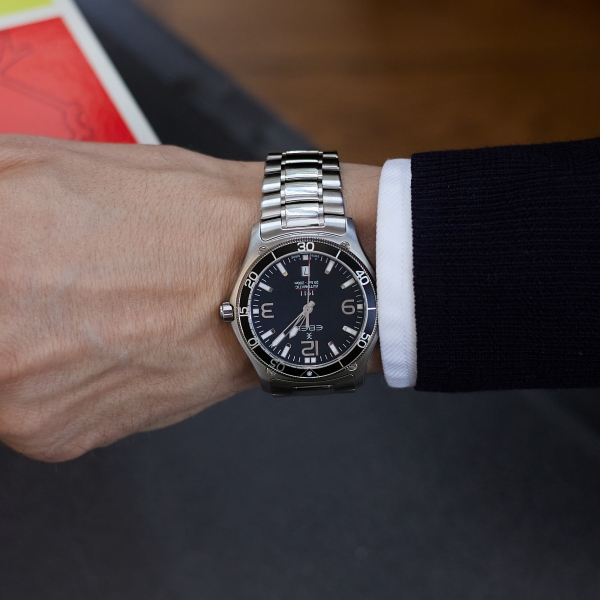 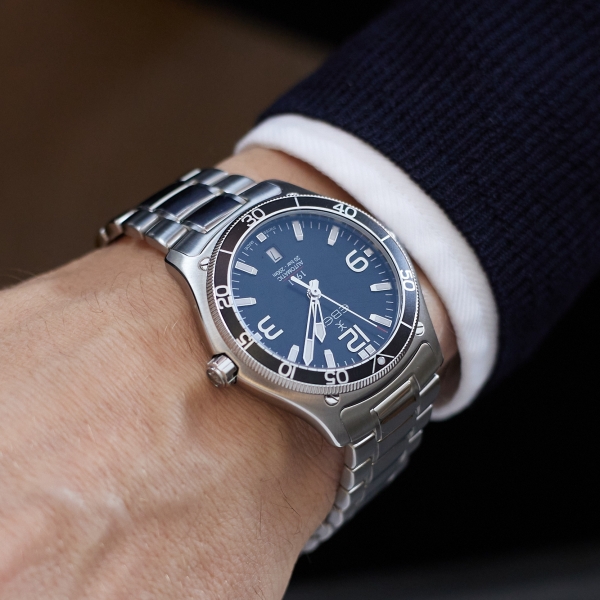 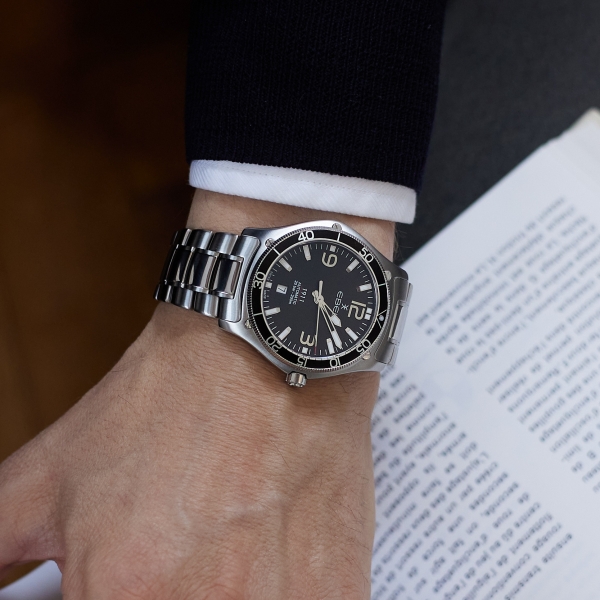 Fine watchmaking is often associated with beautiful places and great surroundings. As a bow to the cradle, historic corporate buildings are sometimes even depicted on timepieces. I love to visit and discover these sanctuaries that brands call home. For over 35 years, EBEL has had an outstanding venue for organising receptions, showcasing the latest collections or just to chill after a workday. The presentation of the new 1911 models happened in this astonishing Le Corbusier building, which deserves a word or two.

Le Corbusier was a contemporary of Eugène Blum (1875-1959) and born in the same city, La Chaux-de-Fonds.

Le Corbusier, originally Charles-Édouard Jeanneret (October 6, 1887, La Chaux-de-Fonds, Switzerland – August 27, 1965, Cap Martin, France) was an internationally influential Swiss architect, city planner and interdisciplinary artist, as he created impressive works of art – paintings, sculptures, drawings and collages, enamels, tapestries as well as engravings too. In 1920 he adopted the ‘Le Corbusier’ name as a pseudonym from an altered form of his maternal grandfather’s name, Lecorbésier.

He is considered as one of the most important architects of the modern age. He shaped the perceptions of modern architecture and of modernity itself. His books about city planning and architectural principles or his Architectural Polychromy (architectural colour keyboards) are still on the bookshelves of many influential architects today. In 2016, 17 of his architectural works were named World Heritage sites by UNESCO (United Nations Educational, Scientific and Cultural Organization).

The Pavillon Le Corbusier in Zürich-Seefeld at Zürichhorn is not far from where I live. The last building designed by Le Corbusier (around 1961-62), it is not only a famous landmark but it hosts a nice museum dedicated to his work. Although Le Corbusier was most interested in architecting places for larger populations since the beginning, he was also well known for his visionary (sometimes controversial) projects and the villas built on private commissions during the pre-war period. La Chaux-de-Fonds, where he begun his life, gives home to some of his earlier works, including Villa Fallet from 1906, Villa Jeanneret-Perret (or Maison blanche) from 1912 and Villa Turque completed in 1916.

La Chaux-de-Fonds has a unique character for several reasons. After a great fire in 1794 which destroyed the city almost completely, it was rebuilt following a grid street plan – the streets of the city stretch in a south-west to north-east direction. According to city policies, buildings cannot expand above a certain height to leave enough light for all the houses queuing up on the hillside with huge windows facing the sun. The area is also known as the ‘Watch Valley’, the most important centre of the watch-making industry – these circumstances served the watchmakers well in order to enjoy the most natural light possible during their working hours. The town developed a significant Art Nouveau heritage, which can be observed in tiles, windows, stairways, interior and exterior decorations.

By stepping into the Villa Turque, it was fascinating to see the spaces the architect in his late twenties designed – and how EBEL interpreted it as the ‘House of EBEL’. The Villa Turque (or Villa Schwob) had originally been a private commission by Anatole Schwob, a watchmaking industrialist from La Chaux-de-Fonds. As the ‘Fondation Le Corbusier’ describes it ‘is the best-known and most remarkable of Charles-Edouard Jeanneret’s creations in La Chaux-de-Fonds. Rich in symbols, and with elaborate technical and aesthetic aspects, it is his most accomplished work before leaving for Paris. The ochre brick-work associated with concrete accentuates the oriental character of the house.’

EBEL commissioned a further renovation of the Villa in 2011 as part of a wider campaign to highlight its cultural importance. The renovation work, guided by the Fondation Le Corbusier, reflects the house’s original spirit and chimes with EBEL’s brand slogan: ’beauty marries function’. 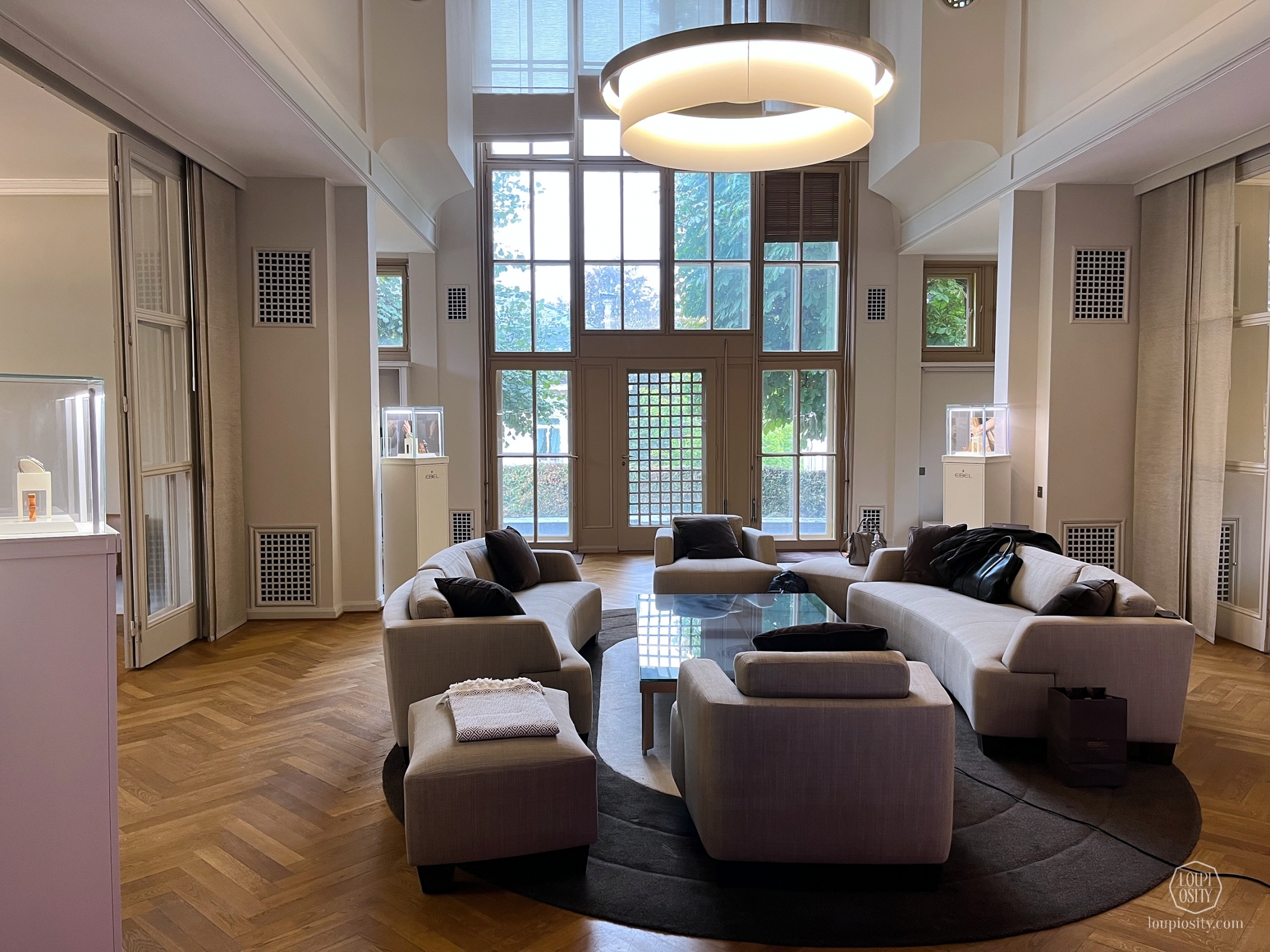 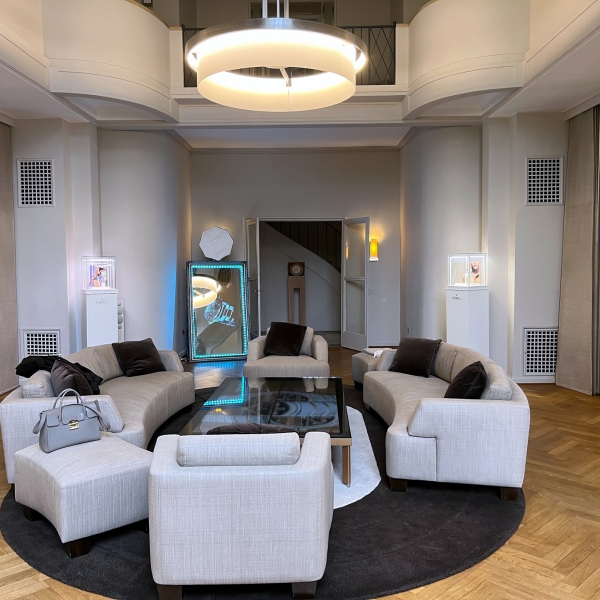 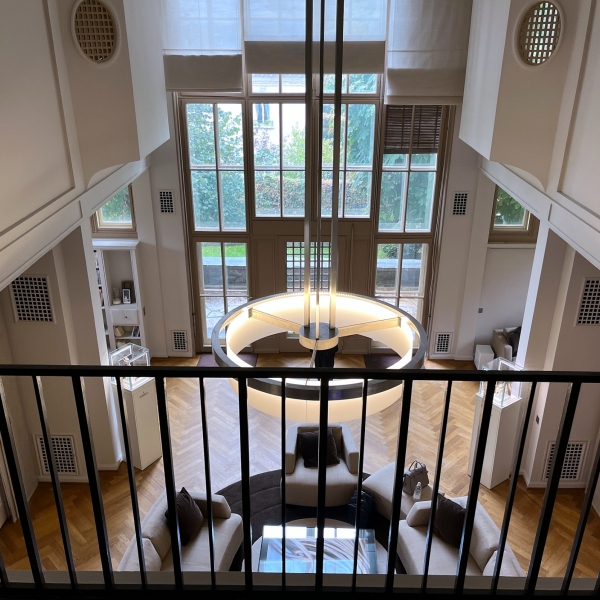 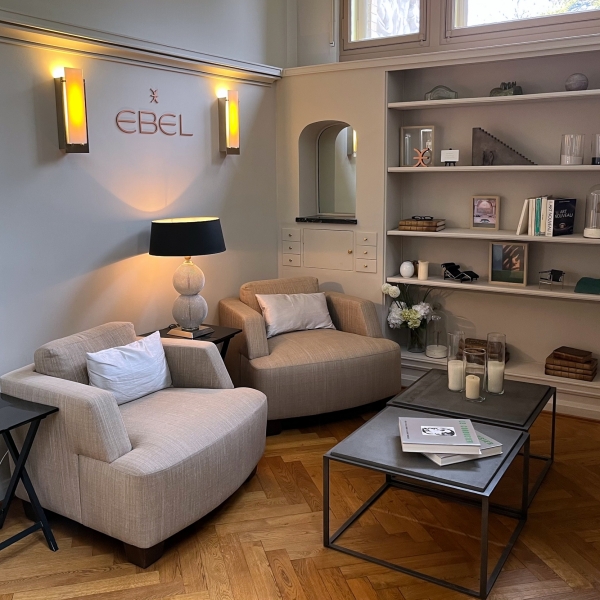 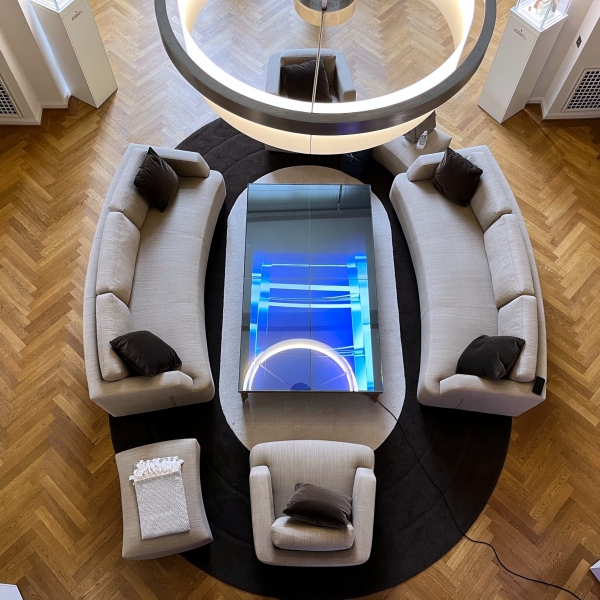 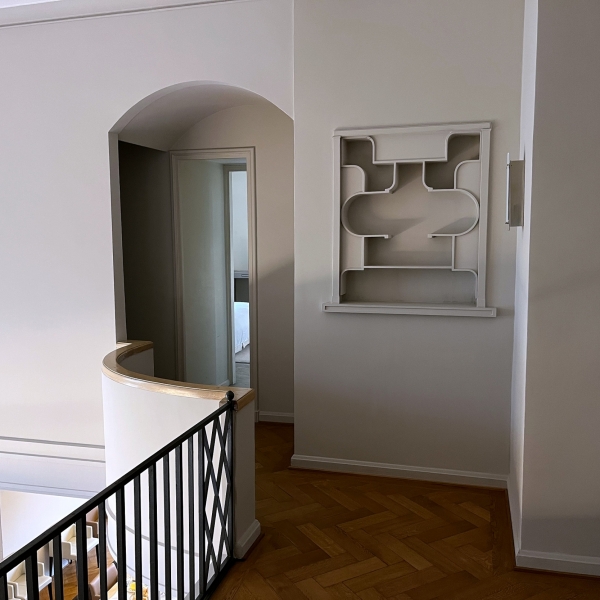 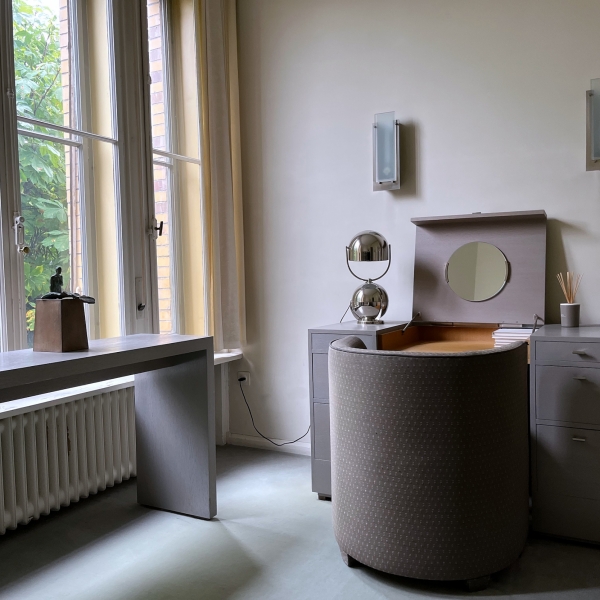 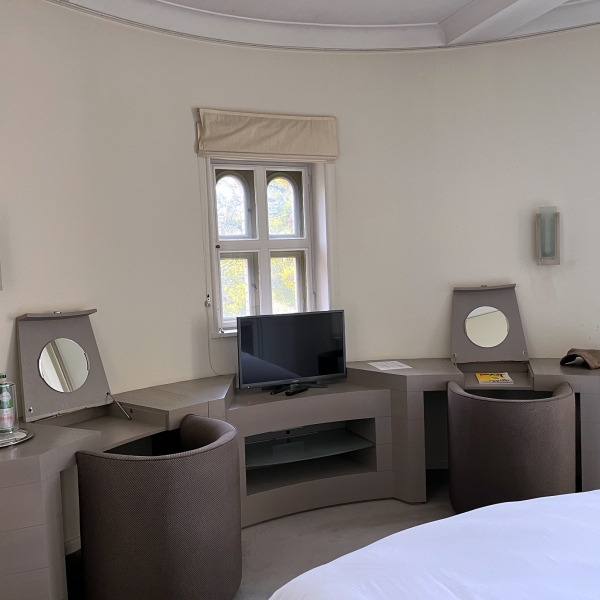 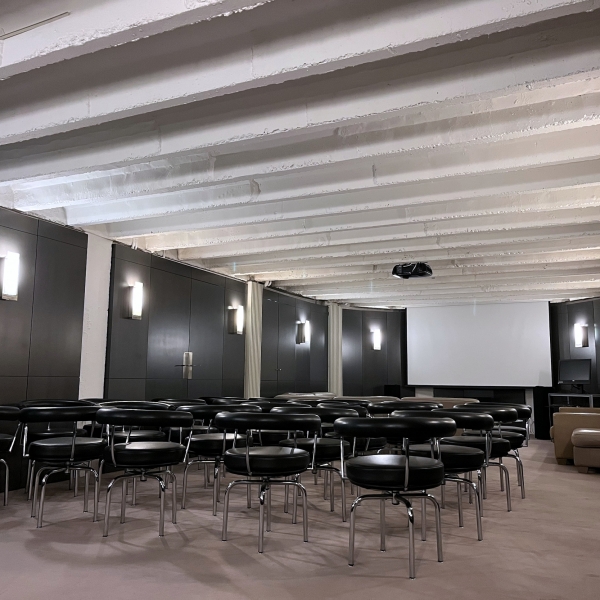 Bovet Fleurier Orbis Mundi Bovet celebrates the 200th anniversary of the company’s foundation by Eduard Bovet in 1822 this year. The Manufacture will hold boutique events throughout the year in various cities around the globe. At the opening of the event series, they presented Orbis Mundi, a true Bovet world-timer in the Villa Louis-Jeantet in Geneva.Girard-Perregaux: changing strategy We met Patrick Pruniaux CEO of Kering’s watch brands Girard-Perregaux and Ulysse Nardin in La Chaux-de-Fonds to hear about the new strategy of GP.Girard-Perregaux at Dubai Watch Week 2021 Girard-Perregaux celebrates it 230th anniversary this year - a big birthday to honor. The brand brought great anniversary timepieces to shine in the Dubai sun this November.