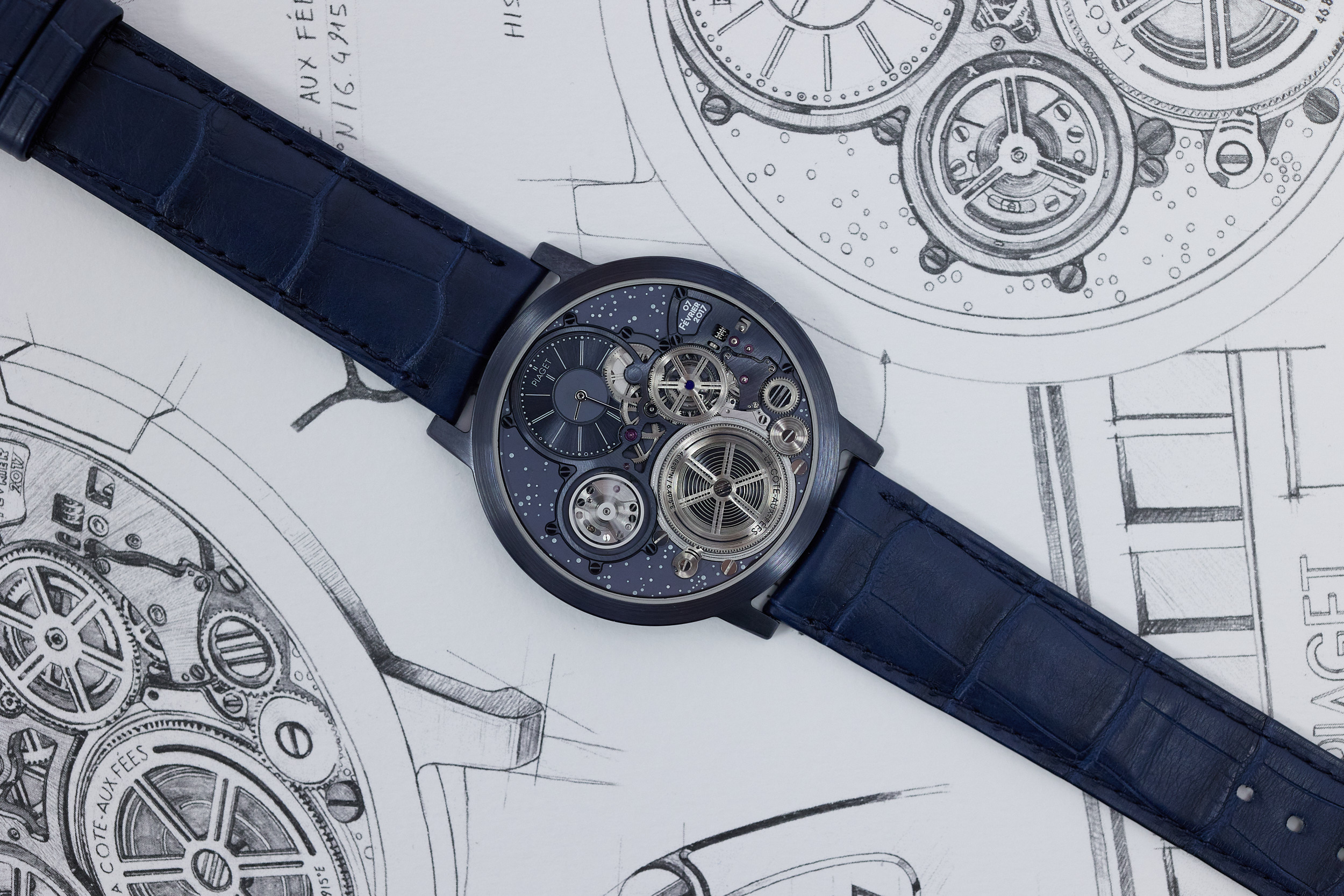 The creation of ultra-thin timepieces has been part of Piaget’s know-how for a very long time. At Watches and Wonders 2022 the Manufacture presented the new Altiplano Ultimate Concept Tribute – a unique piece, celebrating the first AUC prototype born on 7 February 2017.

There are fine-watchmaking brands that can excel in many territories. For creating high jewellery and artistic timepieces, imagining iconic designs and realising true technical marvels Piaget is certainly one of them. Exceptional gem-setting, engraving, wood– or feather marquetry and state-of-the-art calibres reflect Georges-Edouard Piaget’s motto : ‘always do better than necessary’.

1957 was a significant year in the almost 150-year-long history of Piaget as they introduced the ultra-thin hand-wound movement Calibre 9P (2mm thick) which is famous to this day. A few years later they developed the Calibre 12P, which was the world’s thinnest self-winding movement (2.3mm). These two innovations not only showcased Piaget’s exceptional expertise but also opened new avenues in the creative design of watches.

To mark Piaget’s 140th anniversary in 2014, their watchmakers once again revolutionised the ultra-thin world by presenting the Altiplano 38mm 900P with their 23rd ultra-thin calibre. At SIHH 2016 Piaget launched the amazing Altiplano 900D, in which not only the case and the dial are adorned with diamonds, but also parts of the movement.

Piaget’s Research and Innovation division didn’t rest on their laurels. In 2018 they presented the Altiplano Ultimate Concept watch, the world’s thinnest hand-wound mechanical watch at the time, with an only 2mm overall thickness. The watchmakers worked solely on the prototype for four years, during which many of the established codes of watchmaking were re-invented. The timepiece won the prestigious Aiguille d’Or prize at Grand Prix d’Horlogerie de Genève in 2020.

As a tribute to the original design, the Manufacture now offers a unique piece for purchase.

The Piaget logo appears with a historic font, which is the same typeface used in the logo above the manufacture in La Côte-aux-Fées. The name of the village is also engraved on the ratchet wheel together with its GPS coordinates. The inscribed date on the dial marks the birth of the AUC in French (07 Février 2017) while two circles on the outer perimeter of the sub-dial commemorate the exact time, when the AUC came to life – 7:47. 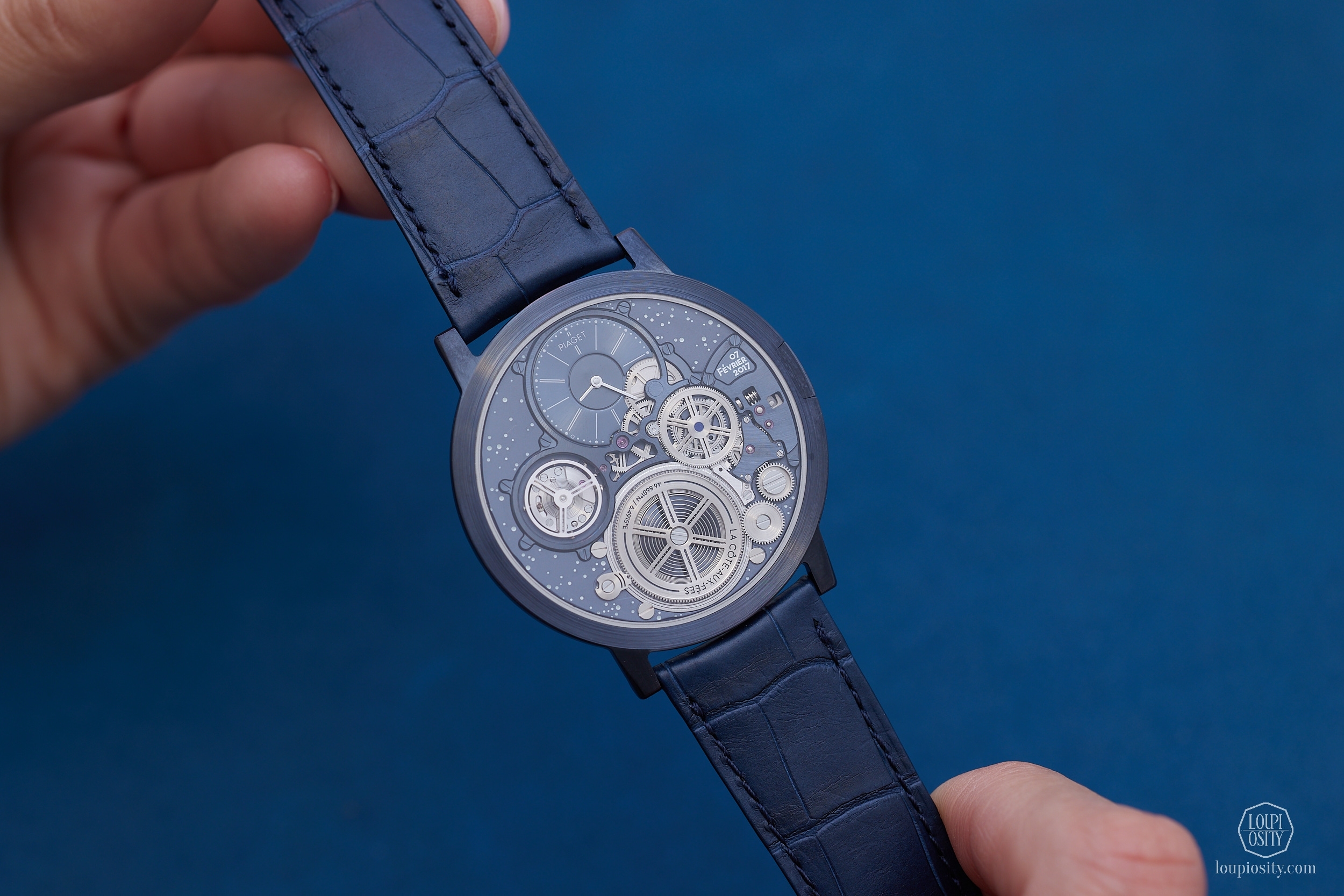 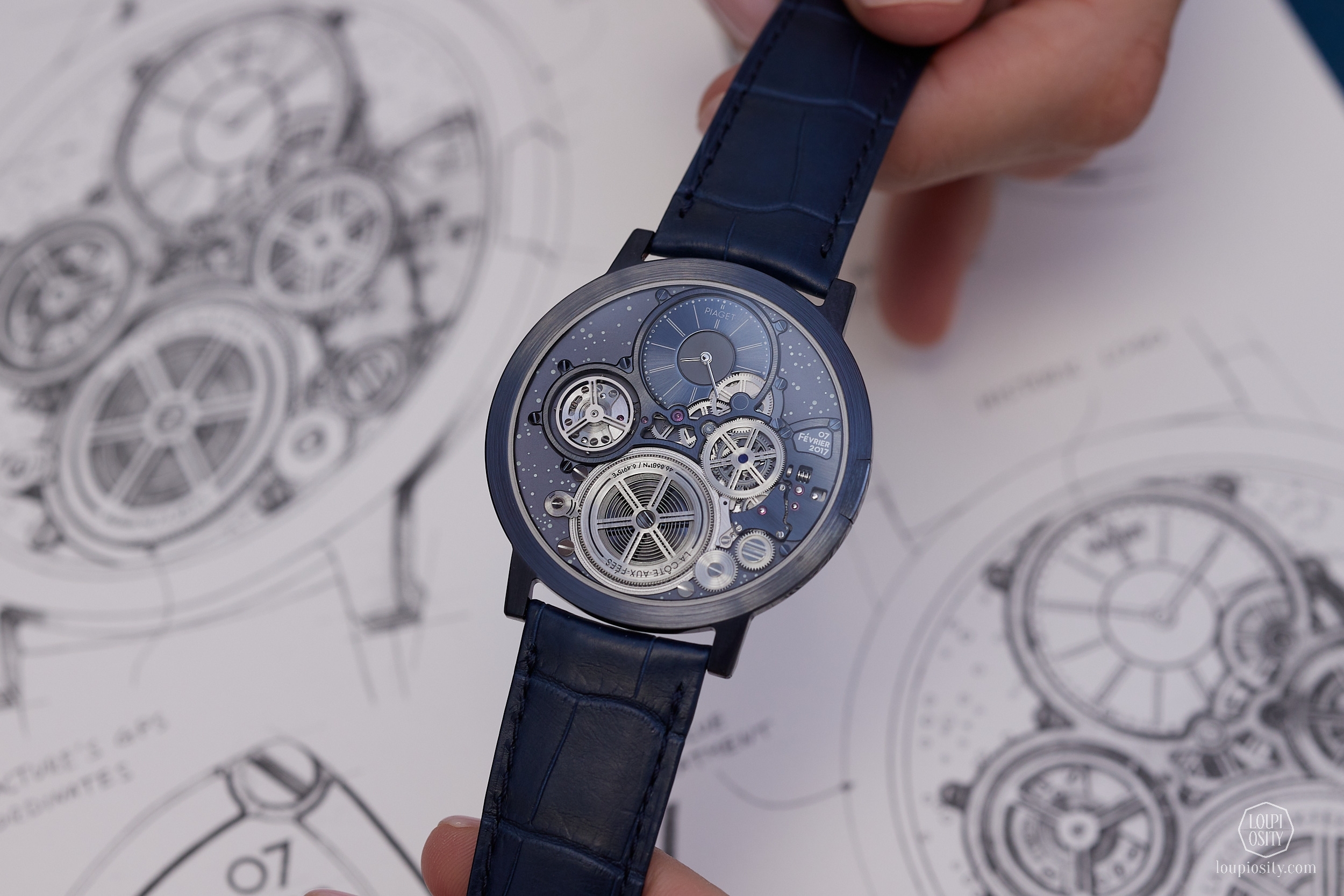 The background of the dial features dot-stars illuminated with Super-LumiNova that replicate the sky above La Côte-aux-Fées at the date and time of the AUC’s birth.

The case-back, bezel and lugs have all been satin brushed making a nice contrast to the case band that is polished. The 41mm case is made of a cobalt-based high-tech alloy. The dark slate blue PVD-treated timepiece is paired with an extremely thin dark blue alligator strap. 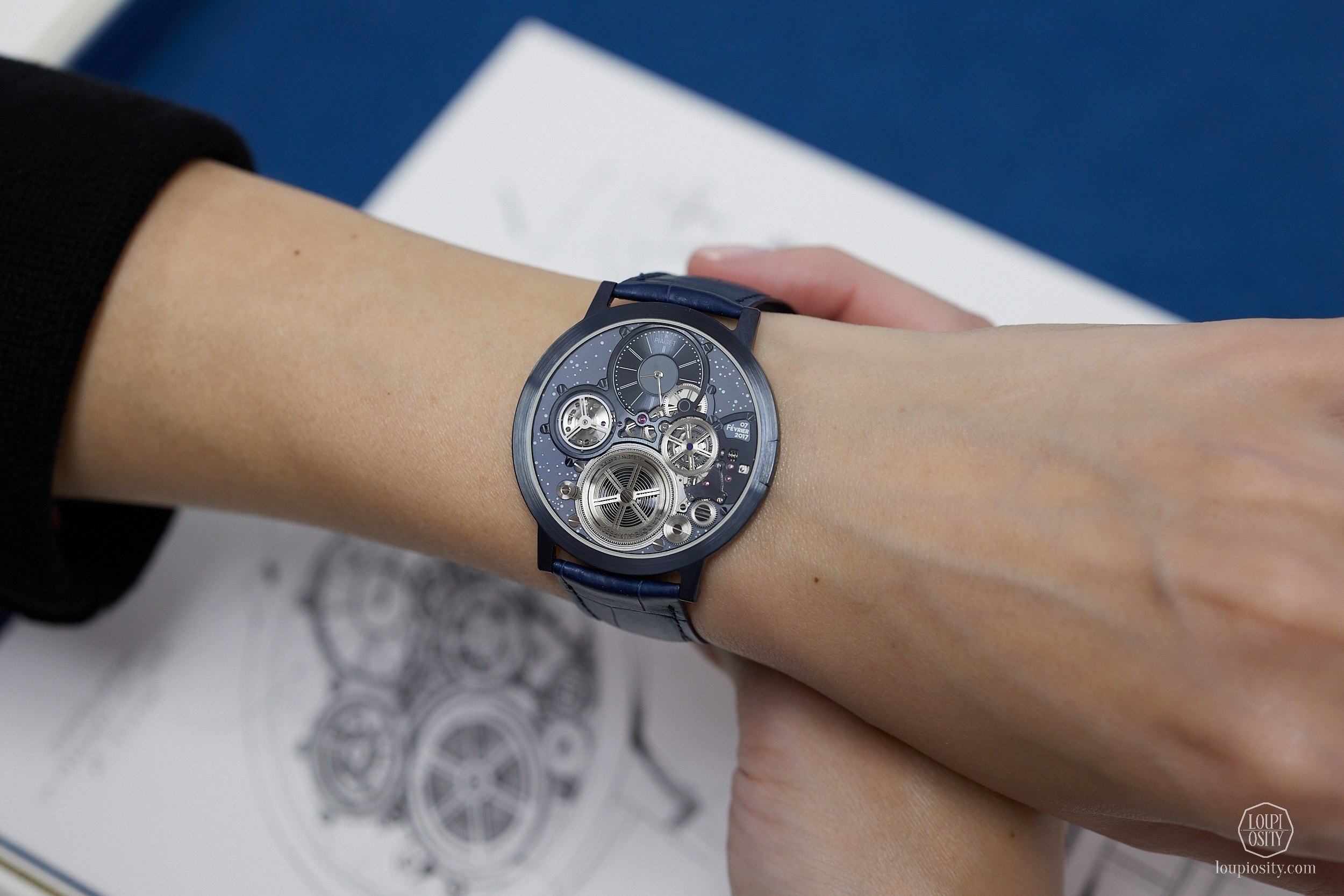 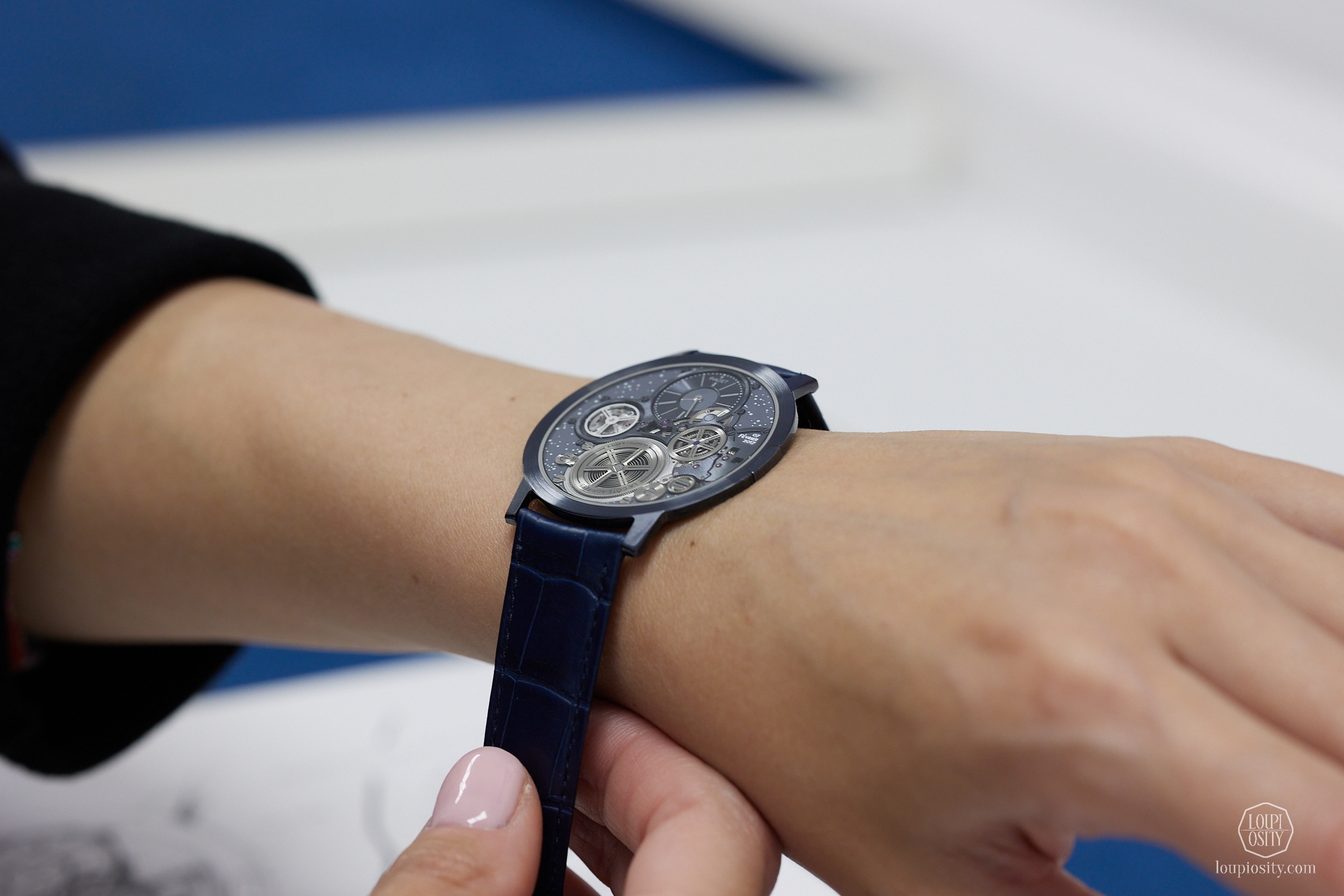 The mere 2mm total thickness is made possible by merging the main plate, case-back and bezel and employing extreme thin parts. How about 0.2mm thickness for the crystal and 0.1mm for some wheels? Even the barrel is just a hollow with no drum and cover – it is covered by the ratchet wheel. It offers 40 hours going reserve and is wound by an endless screw integrated in the case. The balance wheel in the calibre 900P-UP operates at 4 Hz. 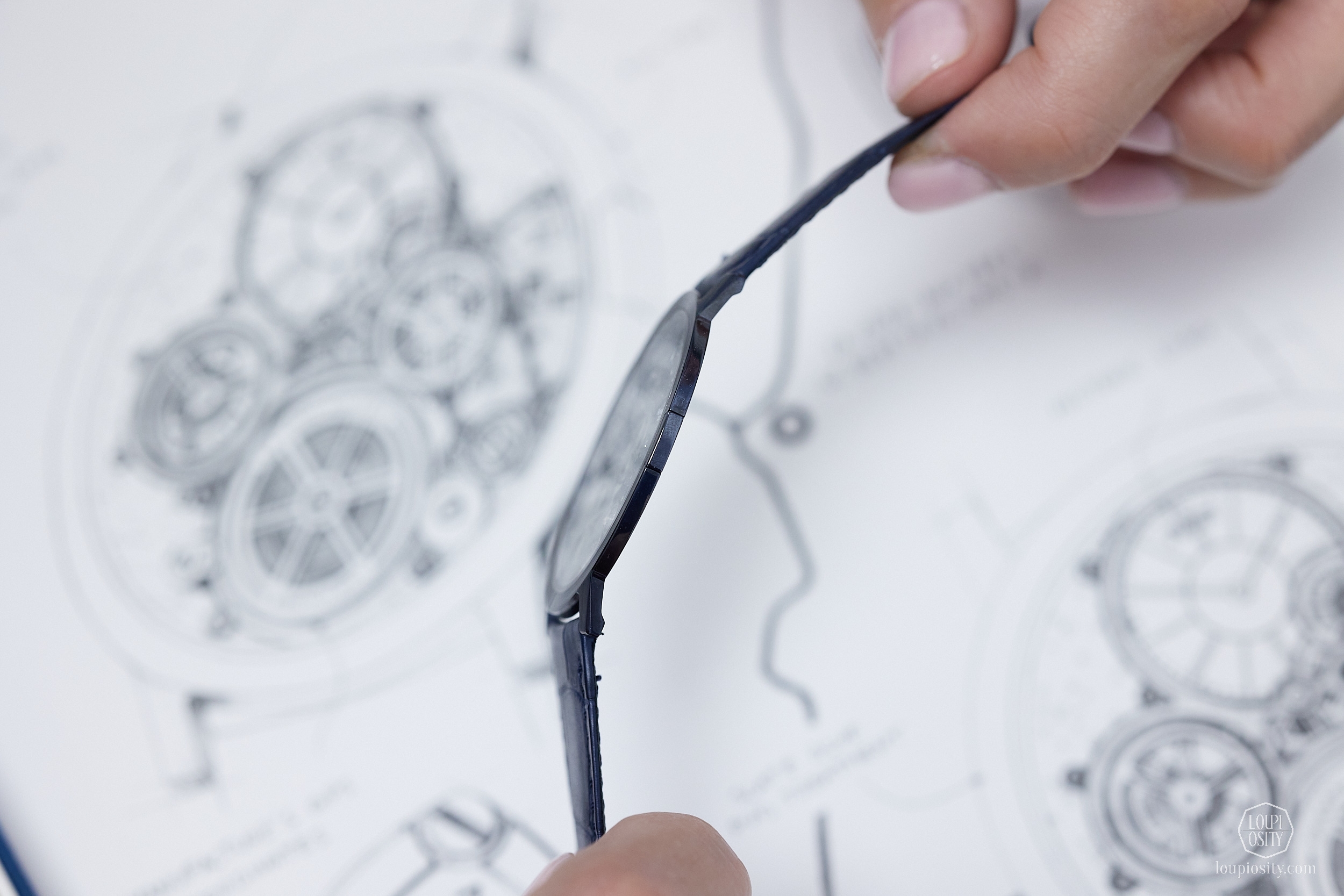 Piaget Watches and Wonders 2022 Piaget presented a great collection of novelties at Watches and Wonders 2022 but we selected two very precious and very Piaget-like timepieces to have a closer look at, here.Piaget - Sunlight Radiant Infinity line With the new Sunlight Radiant Infinity capsule and Limelight Gala watch Piaget is catching the last rays of sun before the moody winter days.'Details: Genealogies of Ornament' - Homo Faber 2022 The ‘Details: Genealogies of Ornament’ is set in the Nautical School area at Fondazione Giorgio Cini. It is one of 15 exhibitions that comprise the Homo Faber Event 2022, organised by the Michelangelo Foundation.