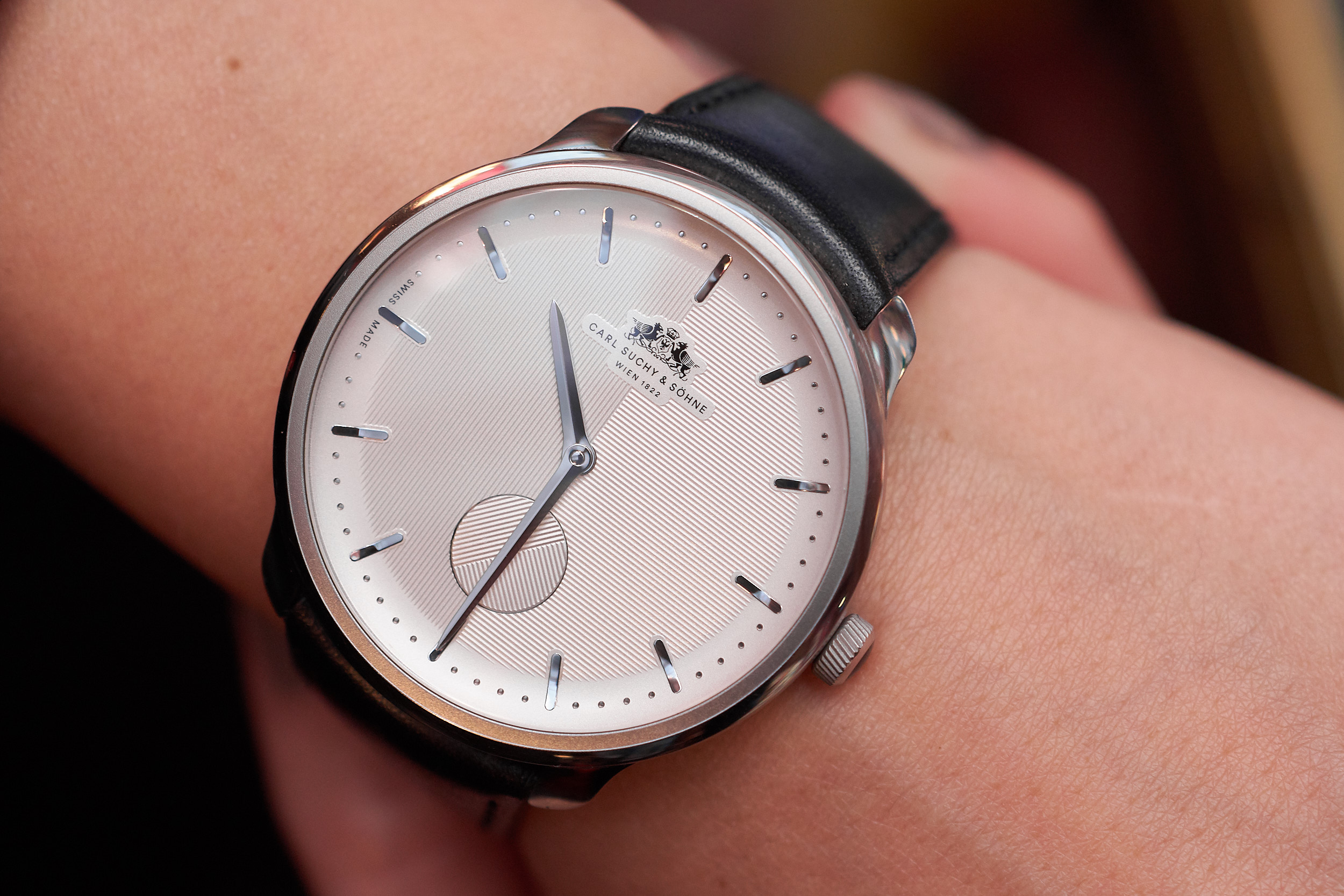 Here we are in a truly Viennese lavish bubble which people flock to from all around the world to experience. Hotel Sacher has been treating guests with 5-star-care since 1879. On this breezy winter day, her overly decorated red salon embraced the elegantly minimalist 21st century lines of the reborn Carl Suchy & Söhne timepieces with harmony. We dated Robert Punkenhofer, art-entrepreneur and the founder of the brand.

Art lovers, local and passing through, had already been searching for the ‘Promising Paradise’ for the past week in Vienna when we met Mr Punkenhofer in the Hotel Sacher. The Vienna Art Week, which ran under this motto for the 14th time this year, embraced cool exhibitions, book presentations, lectures and talks with thought-leaders. A child of the Imperial City, Mr Punkenhofer has dipped his hands in many things – the Vienna Art Week is just one of them. Serving as Austria’s Trade Commissioner on diplomatic missions across the globe he has gained a ‘treasure chest’ full of business cards: artists, collectors, leaders of defining cultural institutions and managers of dominant ventures with sizeable art programs. With the belief that contemporary art is a unifying international language and a clearly entrepreneur mindset he has been the type of person who can make things happen in this arena. This time too, his eyes brightly glitter from the sparks of ideas he is about to undertake. 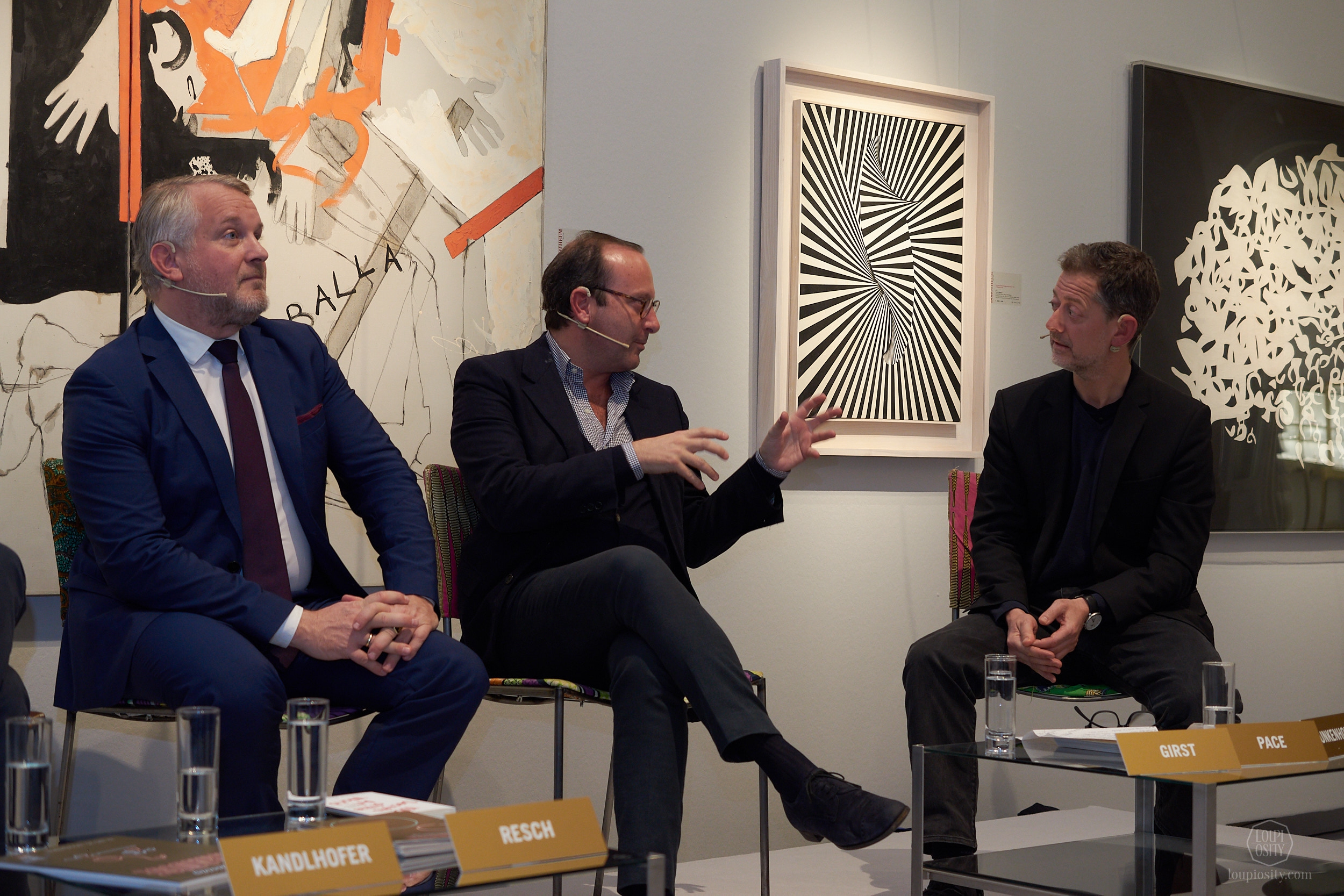 Having seen him moderating the panel about the future of art and digital at the Dorotheum auction house the previous evening, I asked him with honest curiosity:

So, why watches?
‘I came across the name Carl Suchy & Söhne few years ago.’ – Mr Punkenhofer starts. ‘I was astonished when learning that back in the second half of the 19th century the family company was the place to source the finest watches and clocks in the Monarchy. I started researching Carl Suchy & Söhne and my initial feelings become enriched with surprise that no one has done anything with a brand like this since it had closed down in 1918. I wanted to continue it.’

What were the main sign-posts you kept in mind during the work?
‘Carl Suchy created timekeepers with high technical and aesthetic qualities, which earned him and his sons numerous commissions from the aristocrats of the Monarchy. He became purveyor to the court. His designs were very contemporary and much inspired by the emerging artistic movements of the period. I did not want to reinterpret him or create a watch that is 100+ years old. Instead, I wanted to establish continuity to his thinking and aim to design something very contemporary today. As if the Master and his sons, always open for the new, were here in our Millennium and we designed a watch together.’

Lacking the Suchys, who did you team up with?
‘Luckily, I know people, who know people and they hooked me up with very talented individuals. The lines of Waltz N°1 came from the digital pen of industrial designer Miloš Ristin. This was his first watch design, by the way. The name Marc Jenni must be familiar to those in love with independent fine watchmaking. He hand-assembles the movement developed by the Vaucher Fleurier Manufacture (read our article about the movement manufacture here). The branding I do with Austrian graphic designer Reinhard Steger.’

Independent watchmakers rarely come out with classical watches. Did you end up exactly with what you had imagined?
‘I wanted the watch to be contemporary, but clearly continuing the elegance of Carl Suchy and his sons. When you look at their former timepieces, you find high levels of sophistication and astonishing visual balances. For example, I admire the superb minimalistic dials, which to me are reminiscent of the structures Alfred Loos designed later in the early 20th century. Waltz N°1 had to walk the same line and encompass the brand and a bit of Vienna within.’ 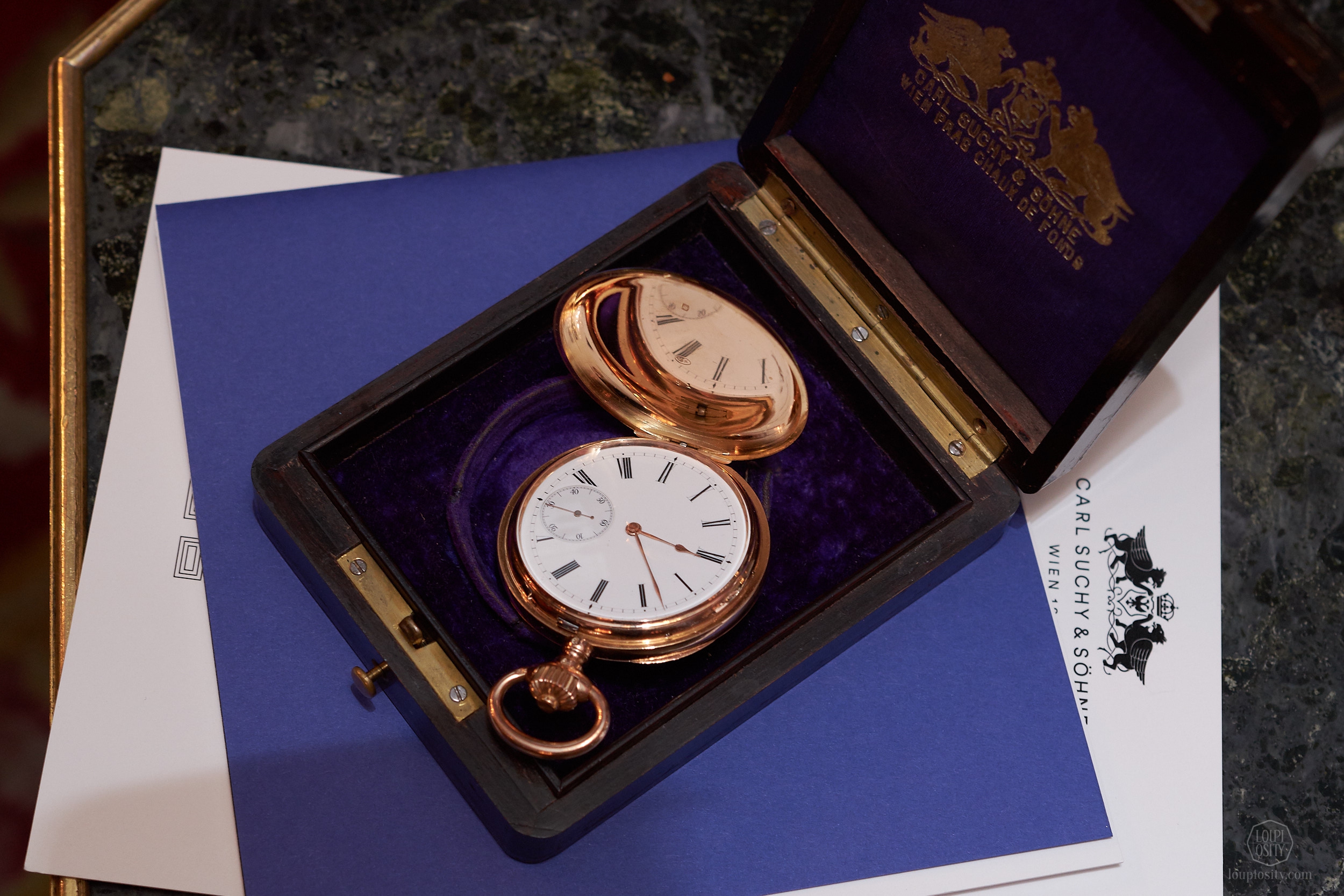 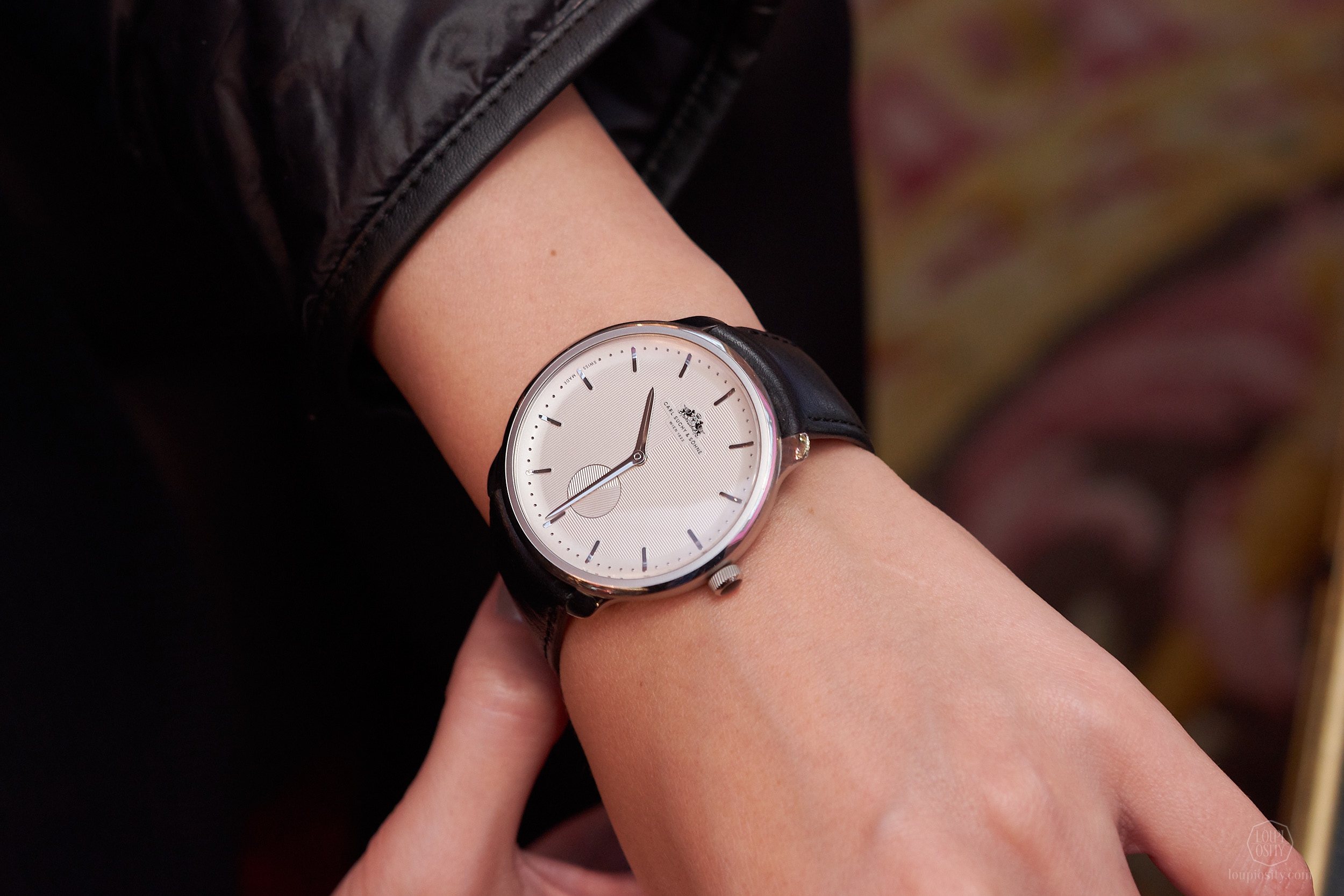 The Loos-bar (or American Bar) and Alfred Loos
The turn of the century (the end of the 1800’s, beginning of 1900’s) was an interesting and innovative time all around the world. In Central-Europe and in Austria this period welcomes the Art Nouveau, Vienna Secession and the Vienna Workshops (the Wiener Werkstätte); a community founded in 1897 as a progressive alliance of artists and designers such as Gustav Klimt, Koloman Moser or Oskar Kokoschka.

Alfred Loos (1870-1933) was their contemporary but he had a different approach to aesthetic. He was an Austrian and Czech architect and influential theorist of modern architecture. He challenged the traditional modes of thinking about art, design and architecture. ’Die wahre Schönheit liegt in der Funktion’ (The true beauty lies in the function) – he summed up his views. In his lecture ‘Ornament and Crime’ he not only advocated ‘smooth and precious surfaces’, but also showed connection between ornaments and morality. He held the needless decoration immoral being a waste of money and effort both by the designers and by the builders. He also pointed out that individuals with questionable ethics tend to surround themselves with unnecessary ornaments.

His works includes residential buildings, the Café Museum (Vienna, 1899), the American Bar (Vienna, 1908), the Villa Müller (Prague, 1928) or the Looshaus at Michaelerplatz 3 (originally a business building for Goldman & Salatsch), just to name a few.

‘The initial plans of Miloš were missing the essence of Vienna, therefore I decided to bring him here from Switzerland and show him around the Viennese way. We ate Schnitzel and went to places like the Austrian Museum of Applied Arts / Contemporary Art (MAK) or the Loos-bar to infect him with the Vienna bug. Looking at the final piece, I believe he really nailed it!’ 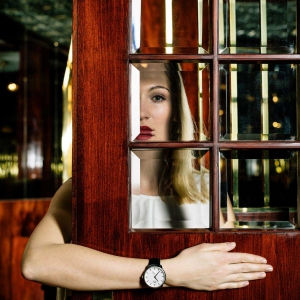 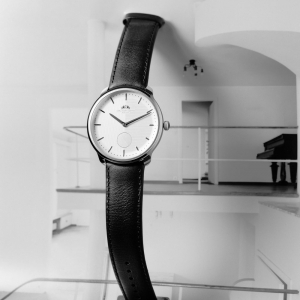 You mentioned Marc Jenni and the Vaucher Fleurier Manufacture. Could you explain why you decided for such a highly regarded package for the timepiece?
‘I thought of following the Carl Suchy family’s footsteps seriously. They were very fastidious about the quality, hence their fame in the circle of the upper-class. I have the same attitude to quality, therefore I too wanted the newborn to live up to these standards. When showing the piece to a potential investor in Asia I was asked why not produce the same watch with a cheaper movement so the margin can be higher at the same customer price point. But this is really not the way I relate to this piece. I am happy to work with Marc and have such an extraordinary movement counting the tact in the Waltz.’

The Waltz N°1 was launched in 2017 and the initial series sold rather quickly. What are your plans in terms of the production volumes?
‘We created 22 pieces in our first batch in 5 different colours. I financed it myself and via friends. In 2017 Peter Brabeck-Letmathe (Chairman Emeritus, former Chairman and CEO of the Nestlé Group and former Chairman of Formula One) joined as an investor and shareholder. The second series consisted 50 pieces. The skeleton version was launched recently in two colours, 5 pieces each. We are looking to bring up our annual production to a few hundred pieces. Preserving our qualities and exclusivity, I see a healthy balance at 1,000 timepieces a year in the mid-future.’

Carl Suchy & Söhne timepieces can be found in Vienna and at retailers specialised in independent masterpieces, such as at Chronopassion in Paris, Jenni Uhren in Zurich, The Lavish Attic in Hong Kong and the Noble Styling in Tokyo. 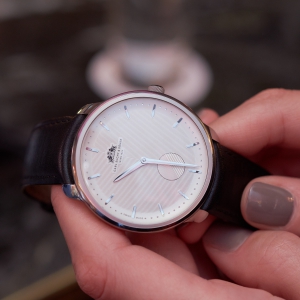 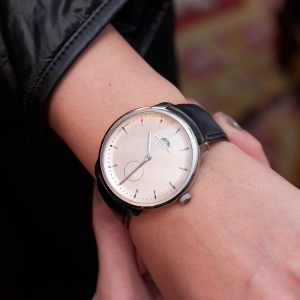 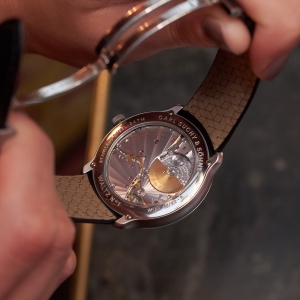 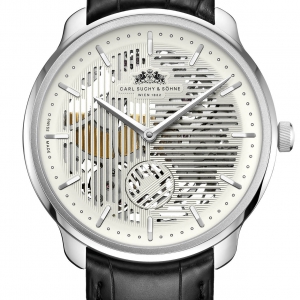 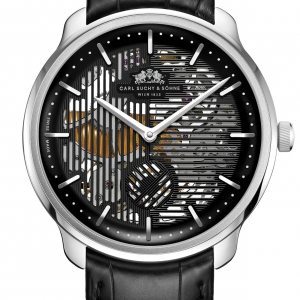 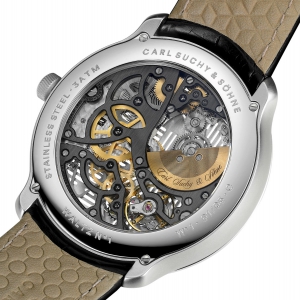 Summer Blue(s) In the midst of this hectic year we all need some fresh air. We took this years Zenith novelties to a post-quarantine walk in Vienna. Come with us!Breitling Chronomat for women We had the opportunity to preview the new Breitling Chronomat women watches in the Breitling boutique in Vienna.New views An overview about a few upcoming finewatchmaking events - hopefully all in real life - follow us along.