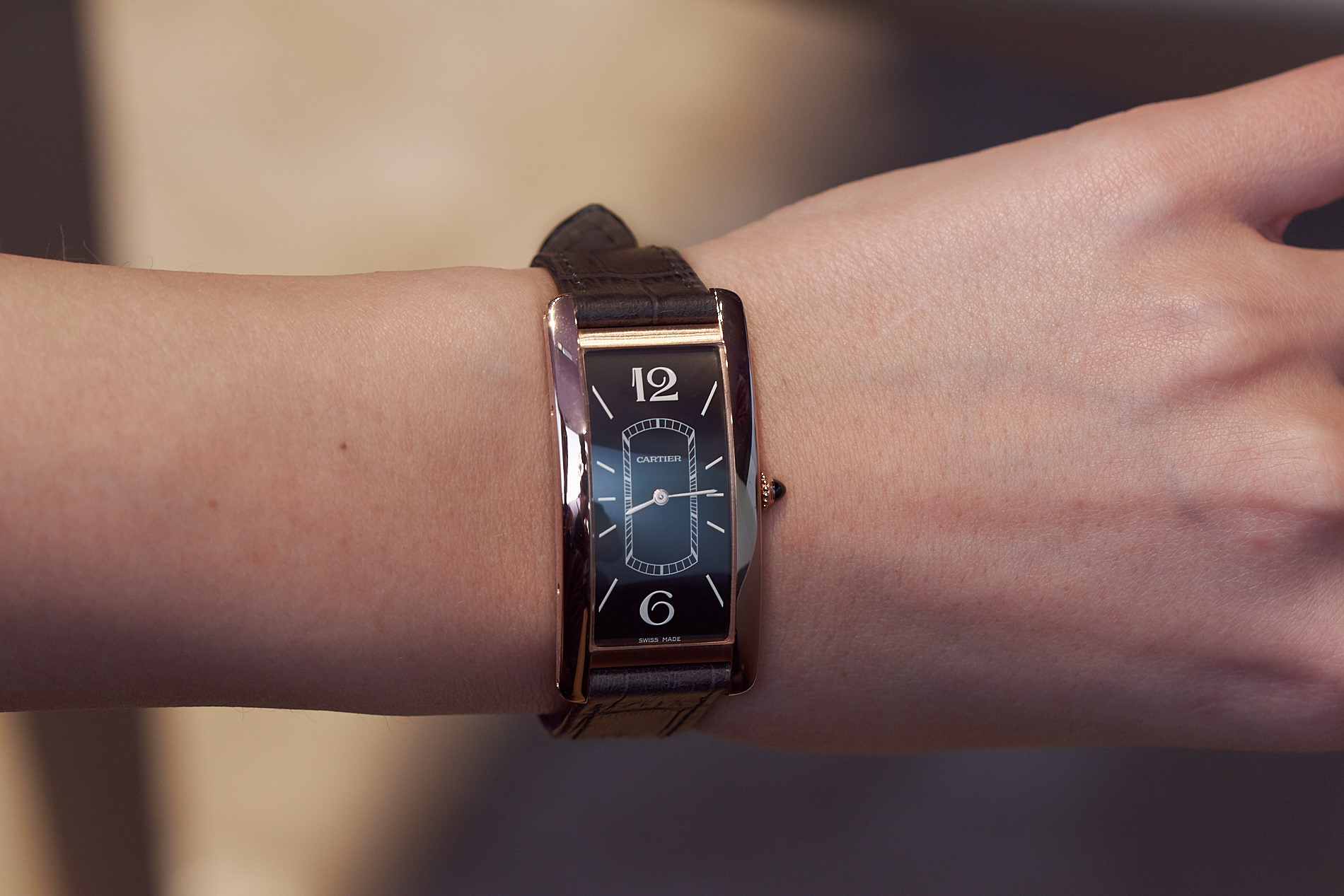 With so many icons “in the house”, Cartier always has the opportunity to revamp one or two of the already famous and loved timepieces. Cartier presented new Santos and Tank models at the SIHH 2018.

Cartier revisited the Panthére De Cartier and celebrated the 100th anniversary of the Cartier Tank last year. In 2018, the brand presented the new Tank Cintrée and the highlight was the much awaited new the Santos line that officially replaced the Santos 100 collection.

In 1904 Alberto Santos-Dumont a pilot pioneer friend of Louis Cartier complained about the reliability and comfort of using pocket watches during flights. Handling the issue with a practical solution is how Santos, the flat wristwatch, was born. It quickly became very popular. From the 1910s onwards the Maison began to manufacture smaller pocket and wristwatches and have created a number of iconic timepieces ever since – Santos certainly remained one of these.

Much later, in the seventies Cartier presented a steel Santos with tiny gold screws on the bracelet – this became such a hit that the company had difficulties in keeping up with the orders. In 1987 the Santos received a facelift. The Santos Galbée had somewhat different proportions and more curved lines than its predecessor.

Commemorating the 100th anniversary of Santos de Cartier in 2004, the Santos 100, Santos-Dumont and Santos Demoiselle (the women’s version) were created. Five years later the Santos 100 received a skeleton model in palladium.

Ever since it emerged, the Santos has been a “love or hate” watch; a divisive piece but with wide audience. Some models are pretty decadent while others are delicate, like this one from the Private Collection of Éric Nussbaum (who was a Swiss gemologist and the first director of the Cartier Collection).

The new 2018 models keep the elegance alive. They have two sizes: medium (35.1mm x 41.9mm and 8.83mm thick) and large (39.8mm x 47.5mm and 9.08mm thick). All of them are available in steel, in pink gold, in yellow gold or in two-tone gold and steel. The automatic 1847 MC beats the rhythm inside, but the date function is displayed only on the large models. Besides the metal bracelet you can choose for example a dark brown or grey alligator or a calfskin strap. 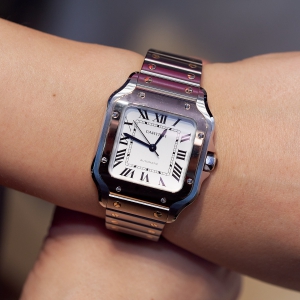 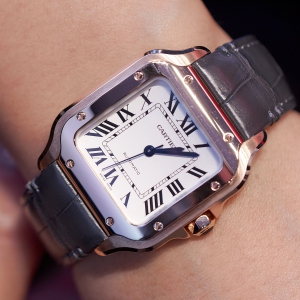 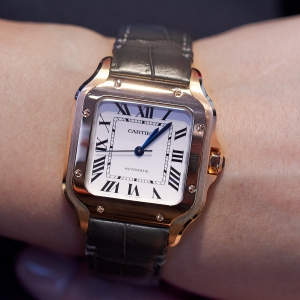 The quickly exchangeable straps were trending at SIHH. The Santos bracelets are equipped with the “QuickSwitch” system, one of the most effective we saw. Cartier bracelets also feature the SmartLink self-fitting technology, which allows you to remove or add links from the metal bracelet without any tool.

Two Santos Skeleton watches were among the novelties too. Both are large models in steel and in pink gold with a manual winding movement, the 9611 MC. 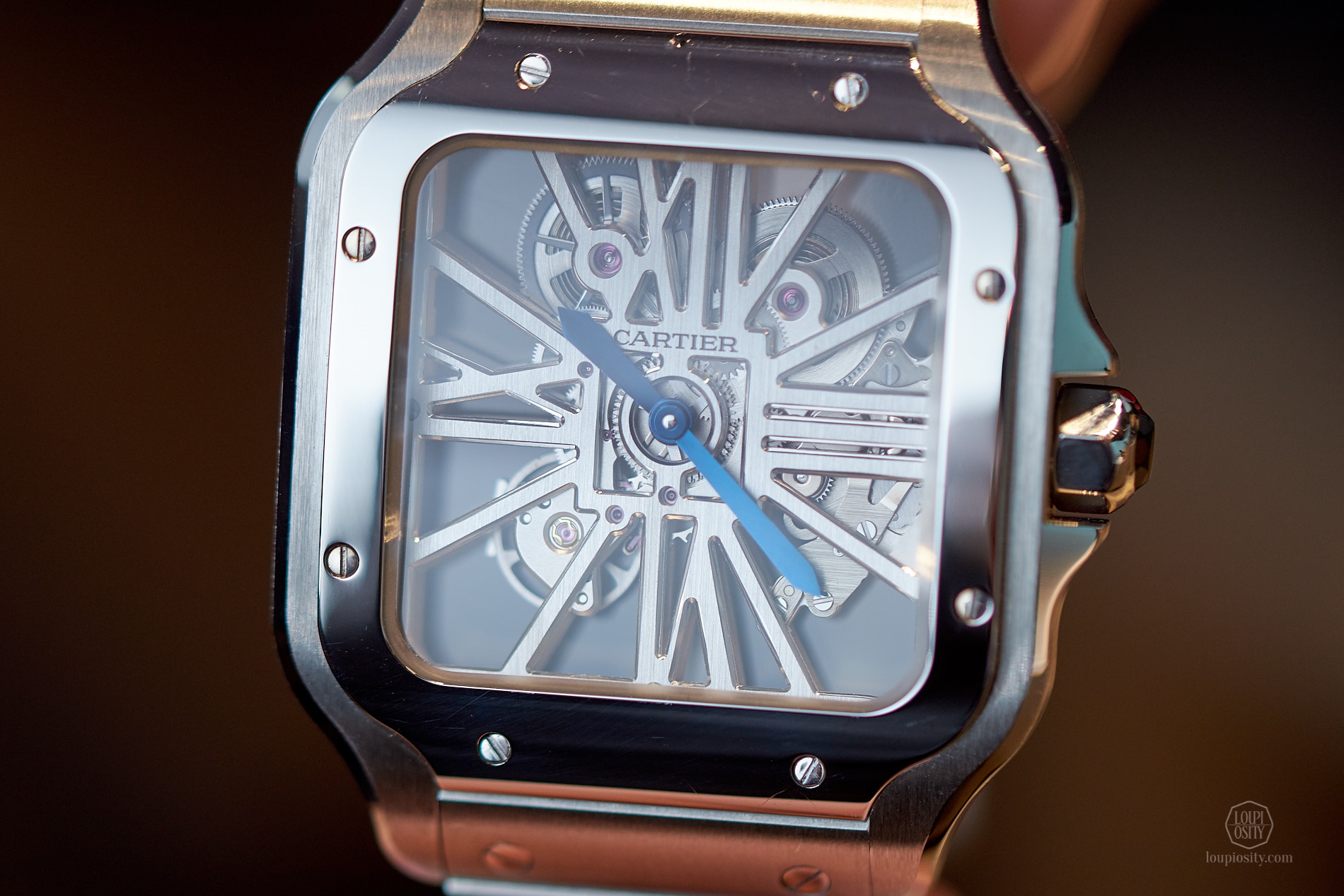 Another icon, another interesting design story and another remake. The inspiration for the case design was the shape of the Renault tanks of WWI, and the main characteristic was that “two side pieces of the Tank seamlessly connect the strap to the case.”

The prototype of the original Tank was a gift from Louis Cartier to John Joseph Pershing, a senior US Army officer, who served as the commander of the American Expeditionary Force in the WWI. It went into production in 1919 and a few years later a new version – the Tank Cintrée (“curved Tank”) was designed.

As Cartier says “Tank is a state of mind” and many clients would agree with that. Aficionados include a number of acclaimed actors such as Rudolph Valentino or Clark Gable, style icons like Diana, Princess of Wales or Jacqueline Kennedy Onassis, great creative personalities like the pop-art pope Andy Warhol or the French couturier, Jean-Charles de Castelbajac. The latter told the Madame Figaro magazine: “If all Tanks were made by Cartier, we’d have the time to live in peace.”

The Tank has been reinterpreted by Cartier throughout the years in many models (Tank Française, Tank Anglais, Tank Louis Cartier or Tank Américaine just to name a few), while always remaining faithful to Louis Cartier’s original concept.

The new Tank Cintrée is sleek and elegant in both look and size; 46.3mm long, 23mm wide and 7.6mm high; railway tracks on the dial with Art Deco-like Arabic numerals at 12 and 6, baton indices for the other hours. Three novelties are available: a yellow gold model with a champagne dial, pink gold with a black dial and platinum with a pale grey dial. Cartier has the tradition to crown the crown with a cabochon sapphire. On the platinum version the Maison chose a cabochon ruby instead. This model is limited to 100 pieces. 8971 MC calibre ticks inside the watches – a Jaeger-LeCoultre calibre 846, dedicated to Cartier.

The Tank Cintrée – both old and new – are among the favourites of many distinguished collectors. The watch auction house Phillips Watches selected it into their “Winning Icons” auction last autumn (see more here).

“I wear a Tank because it’s the watch to wear,” Andy Warhol said. We couldn’t agree more. 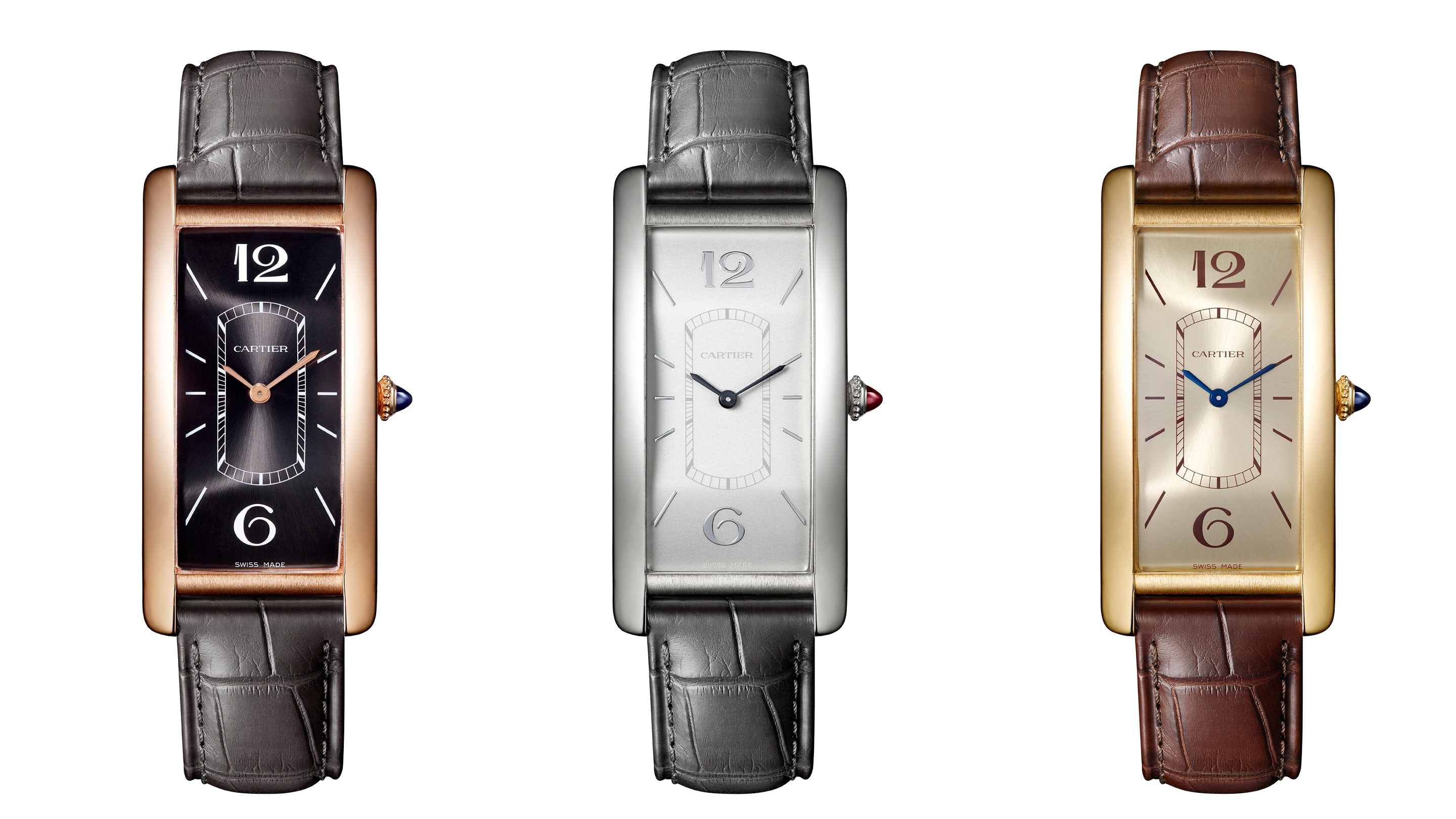 Photo credits: Cartier, Loupiosity.com.
All registered trademarks are property of their respective owners.
All rights reserved.