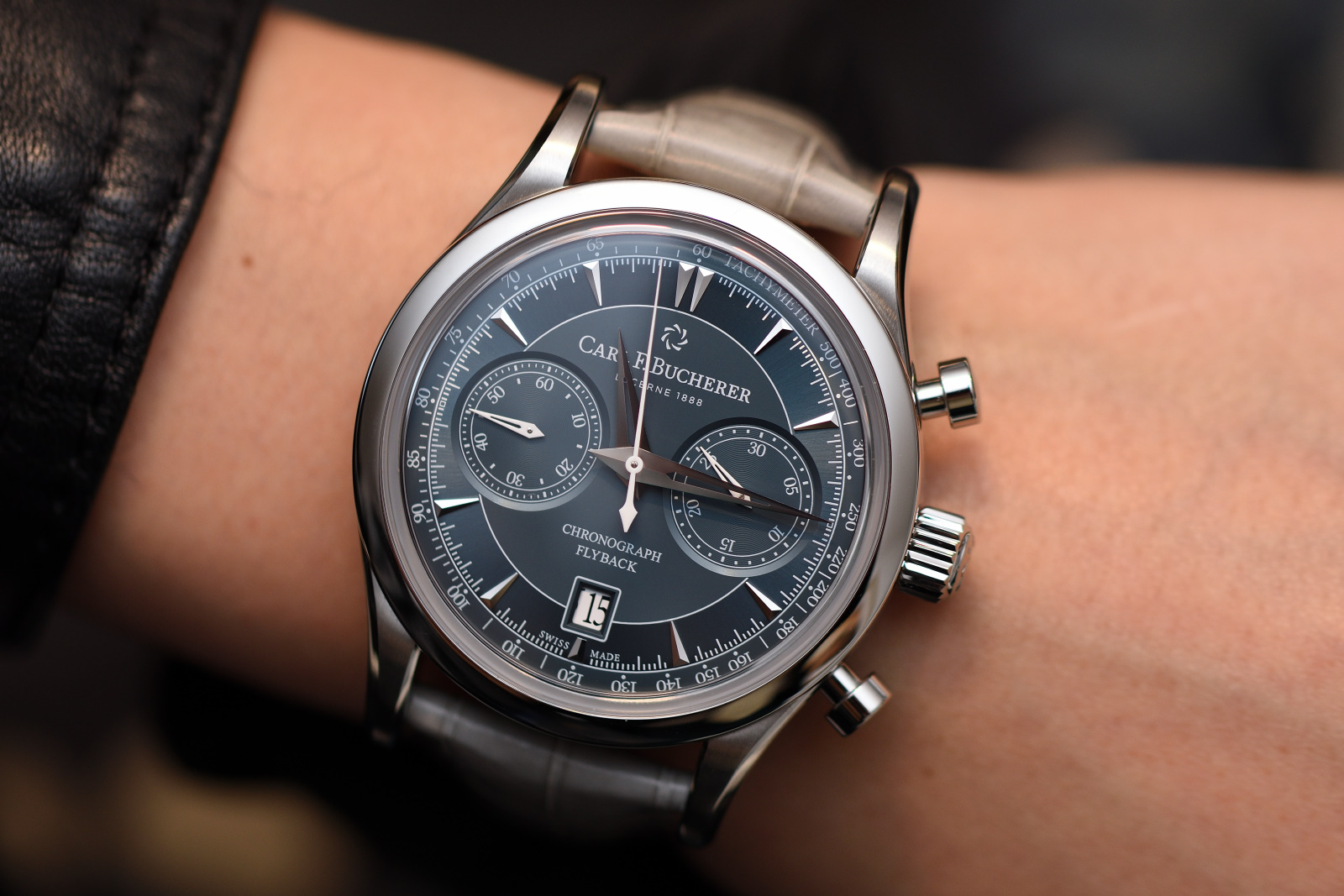 Carl F. Bucherer has been on a decent development curve since 2009. Back then, the manufacture produced 6,400 timepieces a year, which increased to 15,000 by 2011 and 25,000 by 2015. Last year, the company opened a new production facility in Lengnau to increase the capacity to over 30,000 watches annually.

This process actually started somewhat earlier. On 1 July 2007, Carl F. Bucherer acquired a long-time partner, Techniques Horlogères Appliquées SA, a specialist in movement development. The acquisition clearly meant to boost the in-house R&D as well as calibre production. In 2008, they introduced the outstanding base movement they had already been working on for years with THA, coded the CFB A1000. In its attributes, the movement unmistakably flagged that the company had arrived at a new chapter: eye-pleasing and brain-stimulating fresh design, versatility, and the incorporation of advanced mechanical solutions like the peripheral rotor traveling on DLC coated rollers or the escapement shock absorption system. In 2016, the CFB A2000 series was issued which inherited some parts from the A1000, for example the rotor system or the bridge layout, but it was designed to be an even more versatile and economical piece of technology.

Having solid movements like these and models like the ones in the Manero line, Carl F. Bucherer decided to build on them in 2017. On a sunny day in Luzern designers looked out of the window and said: Let’s play with the light! Let’s praise the colours! So it happened that both, the Manero PowerReserve and the Manero Flyback chronograph, received very desirable new colour versions this year.

The expressions of an extroverted soul appeared on the originally sober face of this model. The brand issued vivid limited editions in bright blue and green that seek the wrists of equally colourful individuals. There is a nice gradient from a deeper tone at the periphery to a lighter hue towards the centre.

The calibre is from the above-mentioned A1000 family, CFB A1011 with date, weekday, time and power reserve indication functions. I love the shape of the bridges and the decorations, which are a little like conductive tracks on a circuit board. The new dial colours enhanced the overall modern feel of the timepiece.

Both editions have steel cases and calfskin straps matching the colour of the dial. 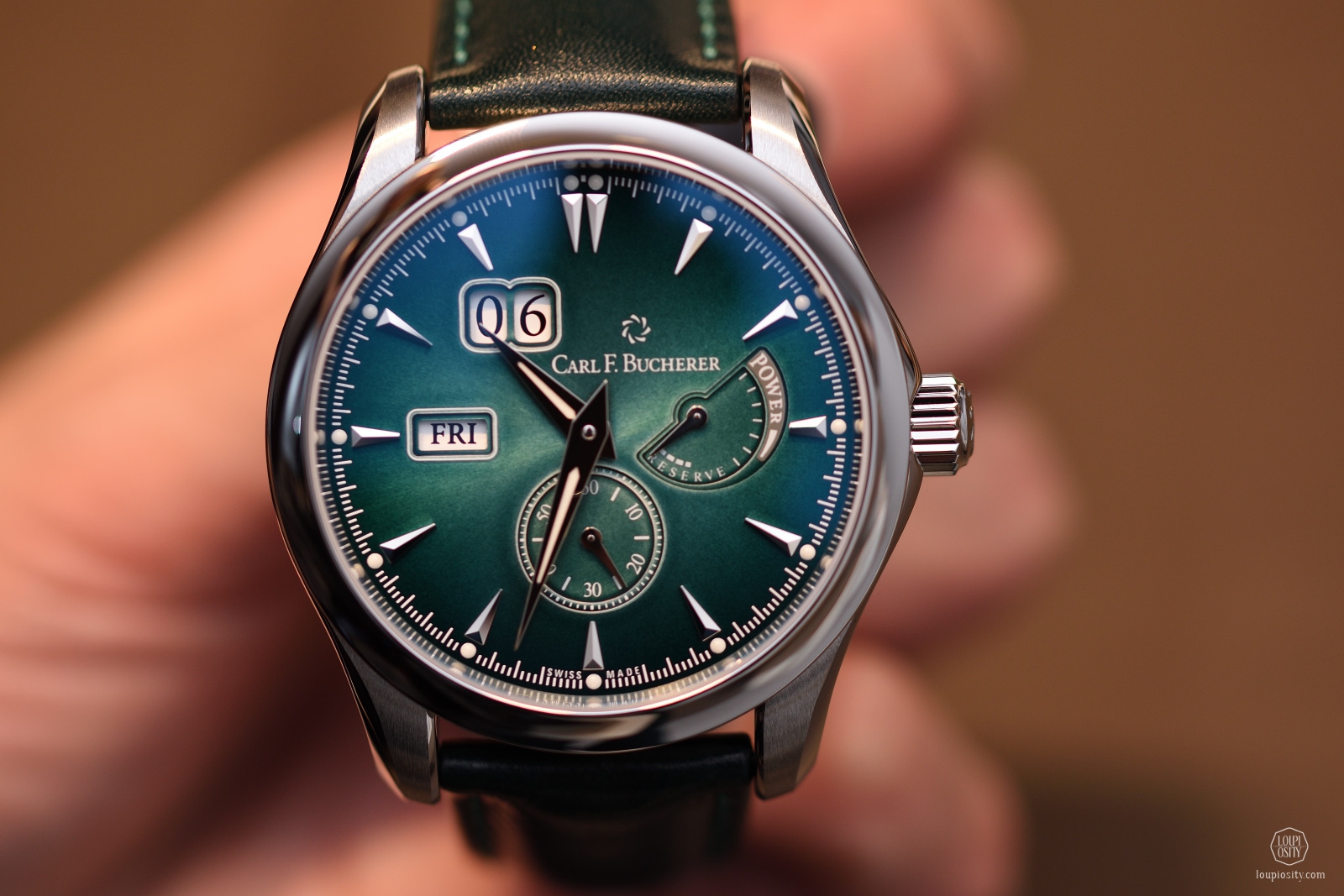 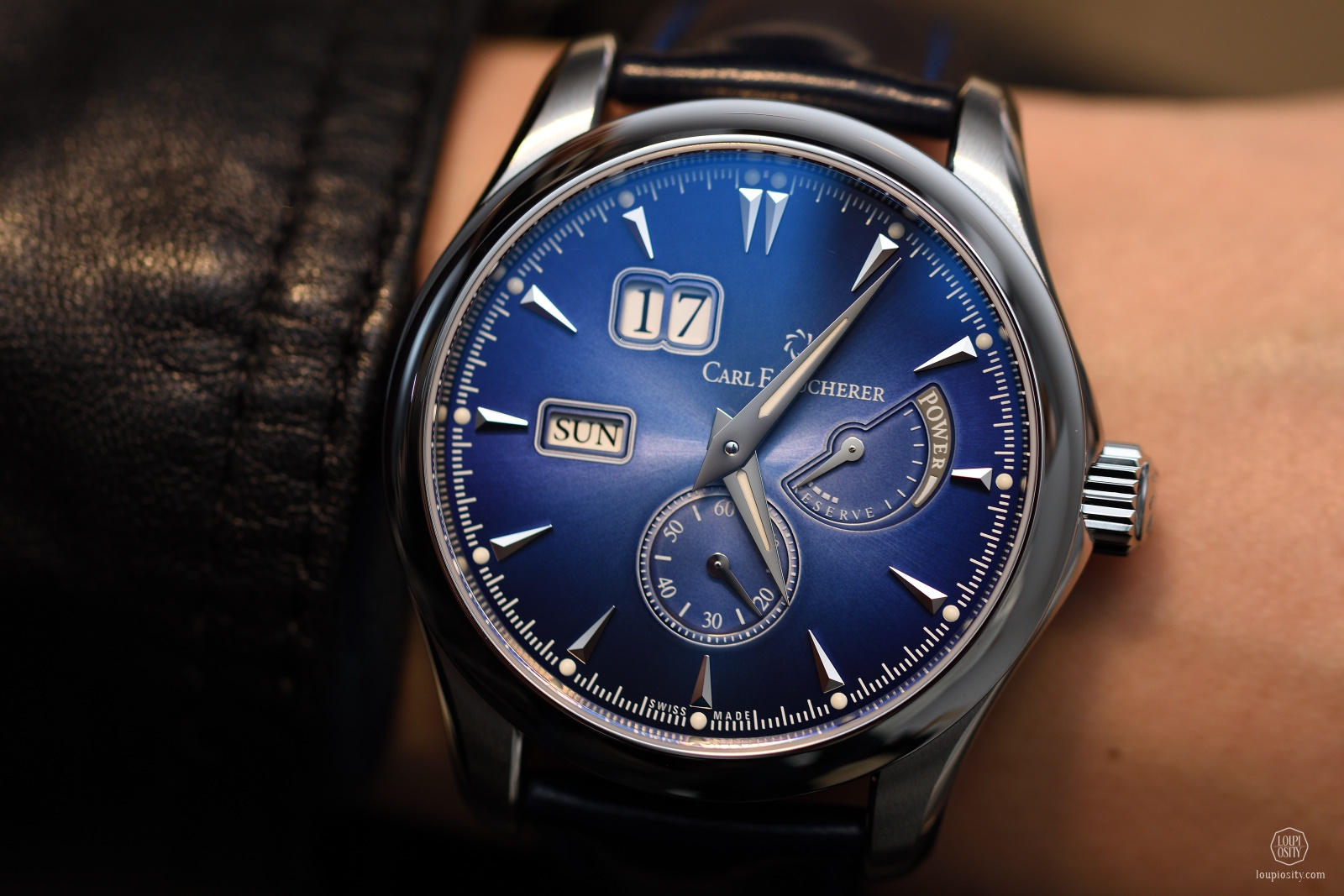 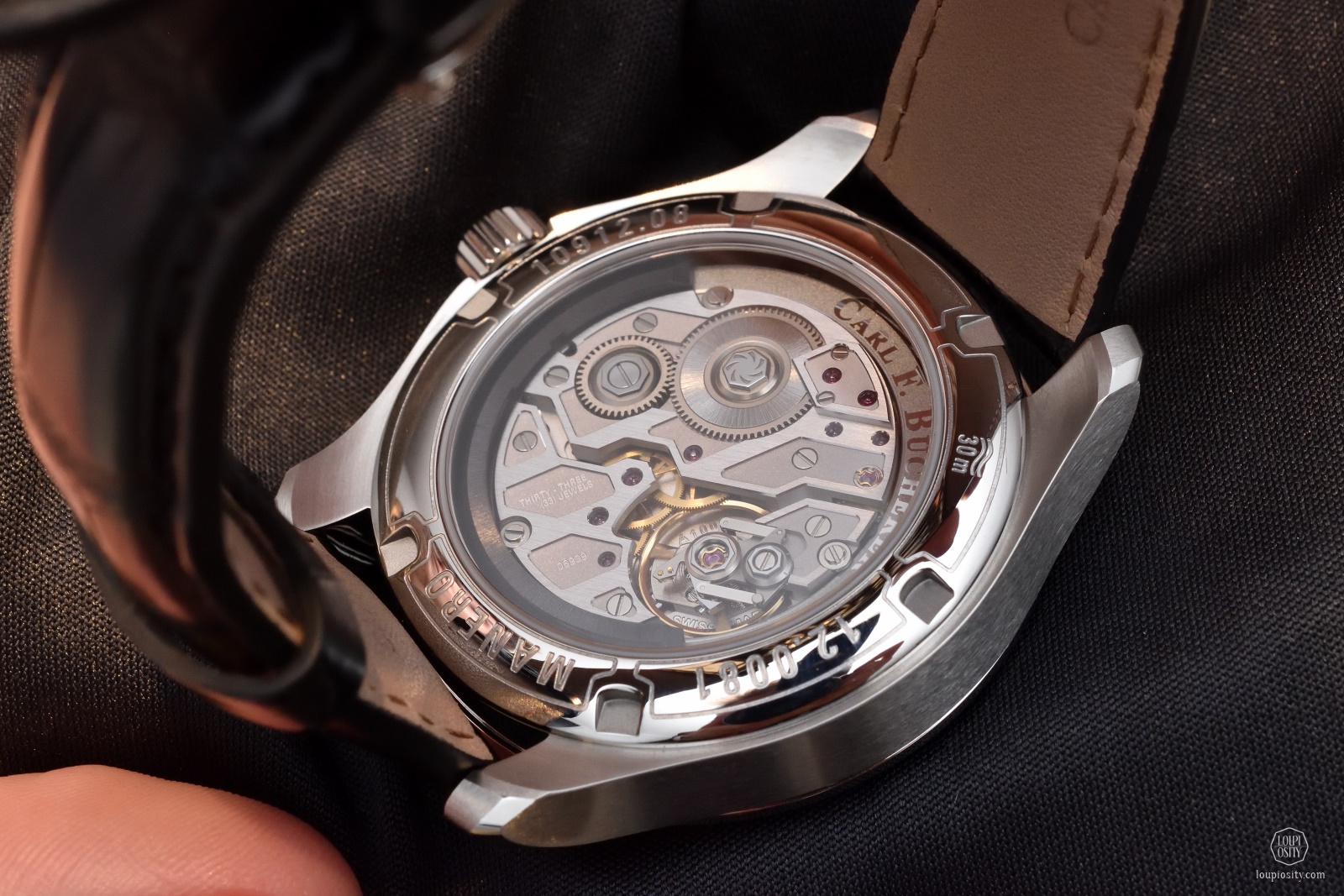 The old-timer style chronograph Manero Flyback was announced in 2016 in steel and 18k rose gold. The smooth and classic lines provide great legibility and are enjoyable to look at. The brand nailed it with three new colour combinations.

My absolute favourite is the steel bluish-grey version with a light grey Louisiana alligator strap. The two chronograph registers are slightly recessed in the surface of the dial and have a double circle track for the hand to run over. The counters and indicators are very well positioned on the dial (the case is 43mm diameter), providing an easy legibility of information. The Manero signature inward pointing applied indexes provide a lot of dynamism to the timepiece, just like the pump pushers. During time measurement, when the reset pusher at 4 o’clock is pressed, it stops the hand. Once released, the hand flies back to the zero and immediately starts to measure a new interval.

Gold is the new identity of Carl F. Bucherer and therefore another warm version of the Manero Flyback was presented in red gold with a champagne dial. This combination probably has the most vintage look of all. The third version is the most reserved in the triplet – featuring a red gold case with a black dial, golden hands and indexes. 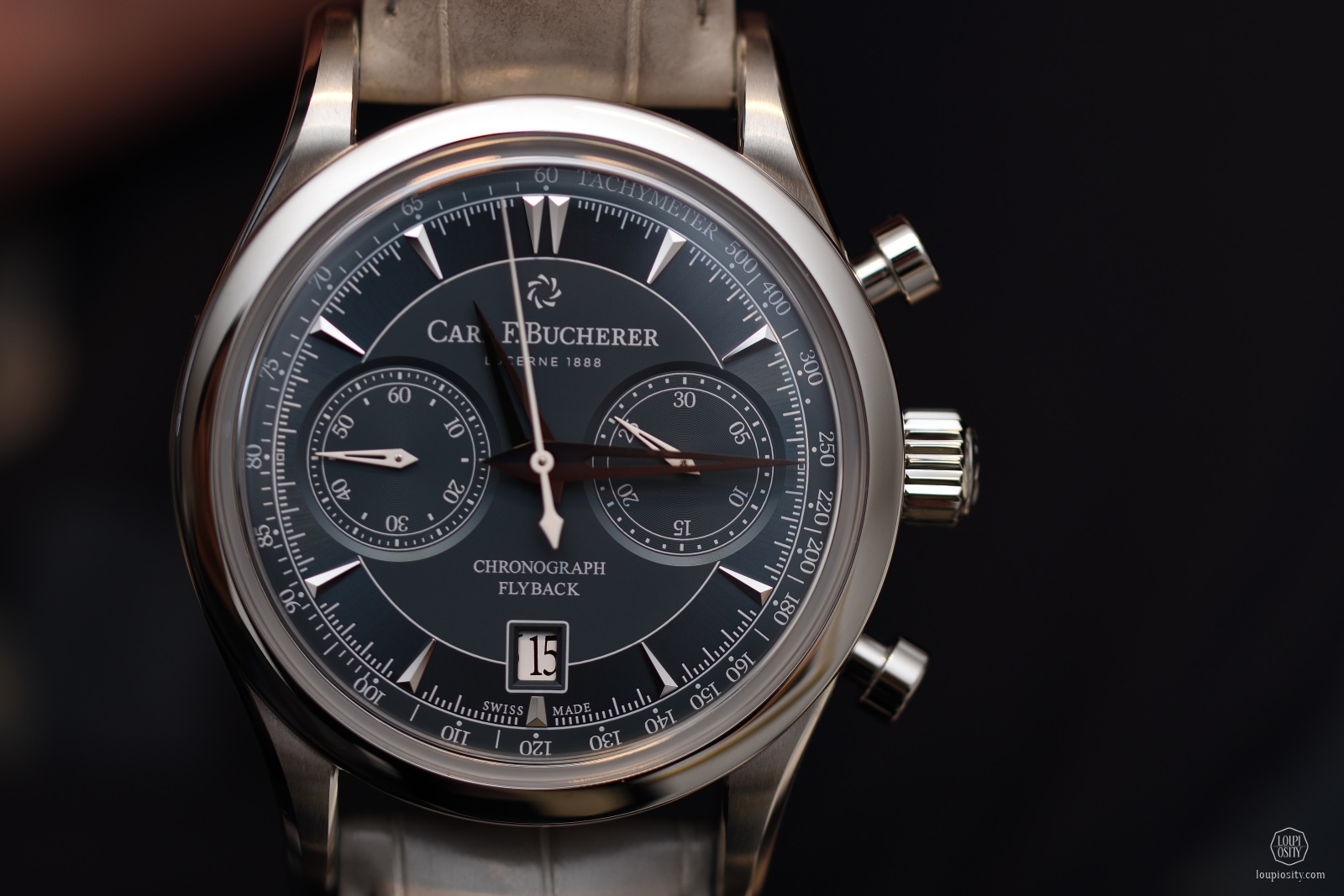 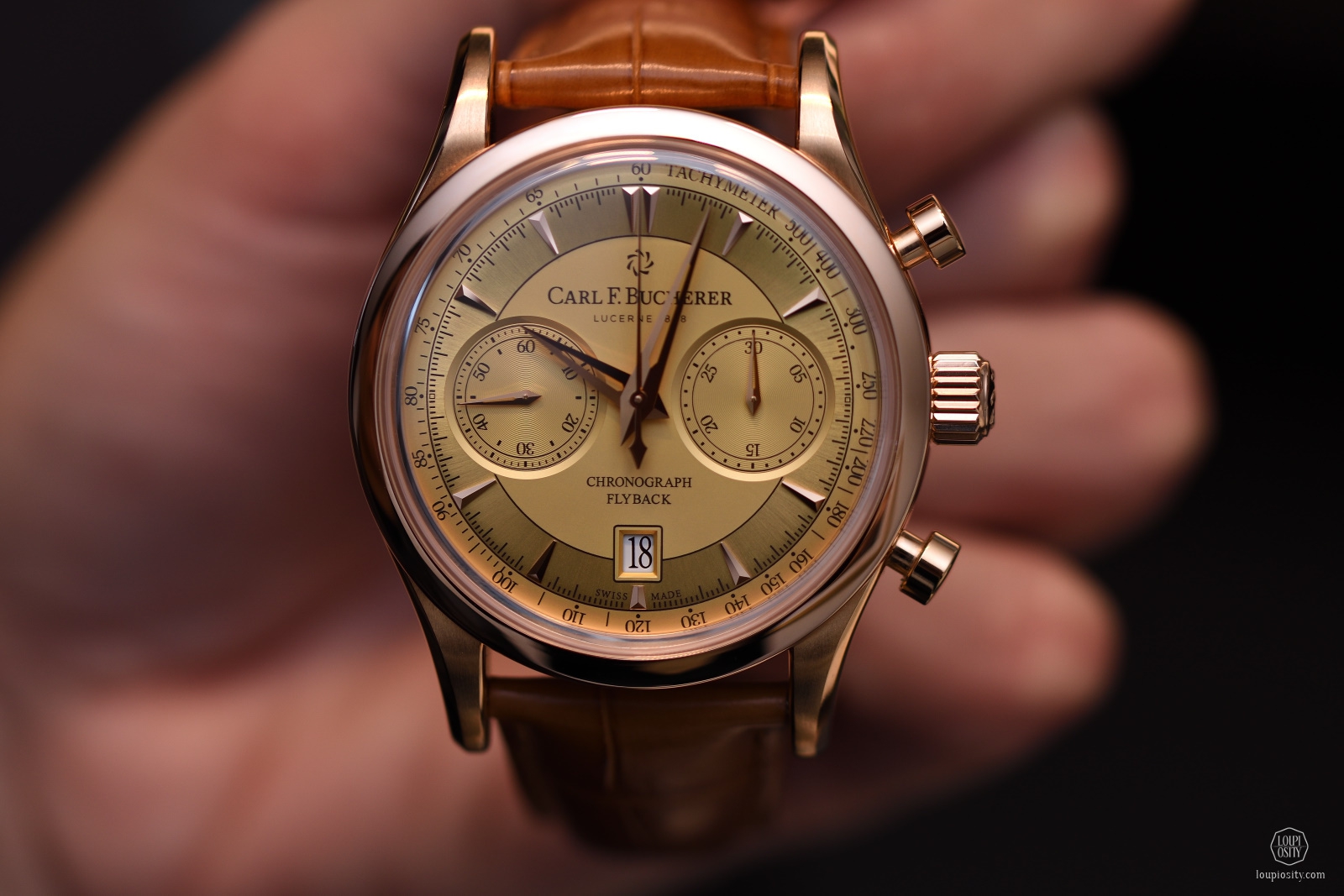 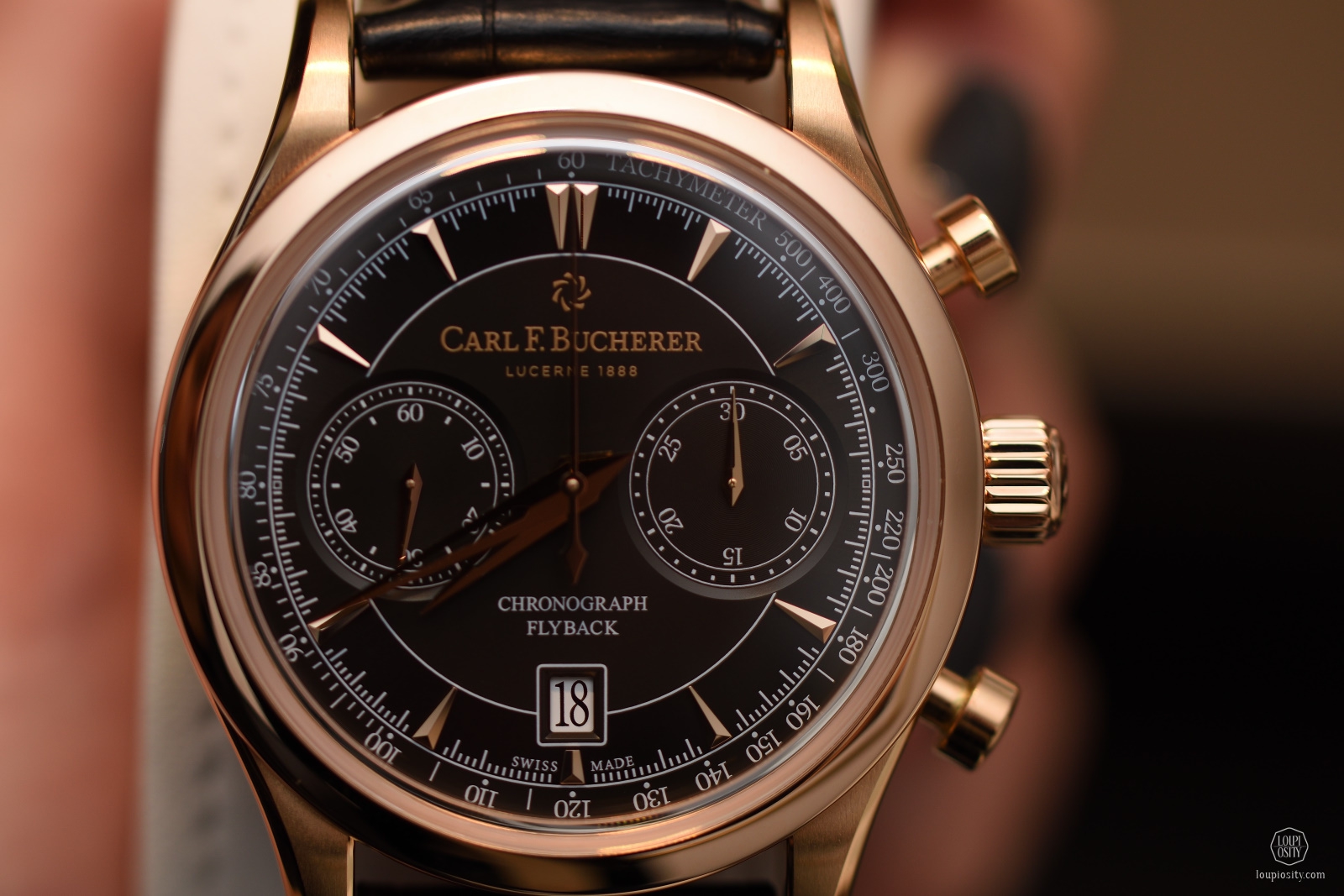