Wings on the wrist 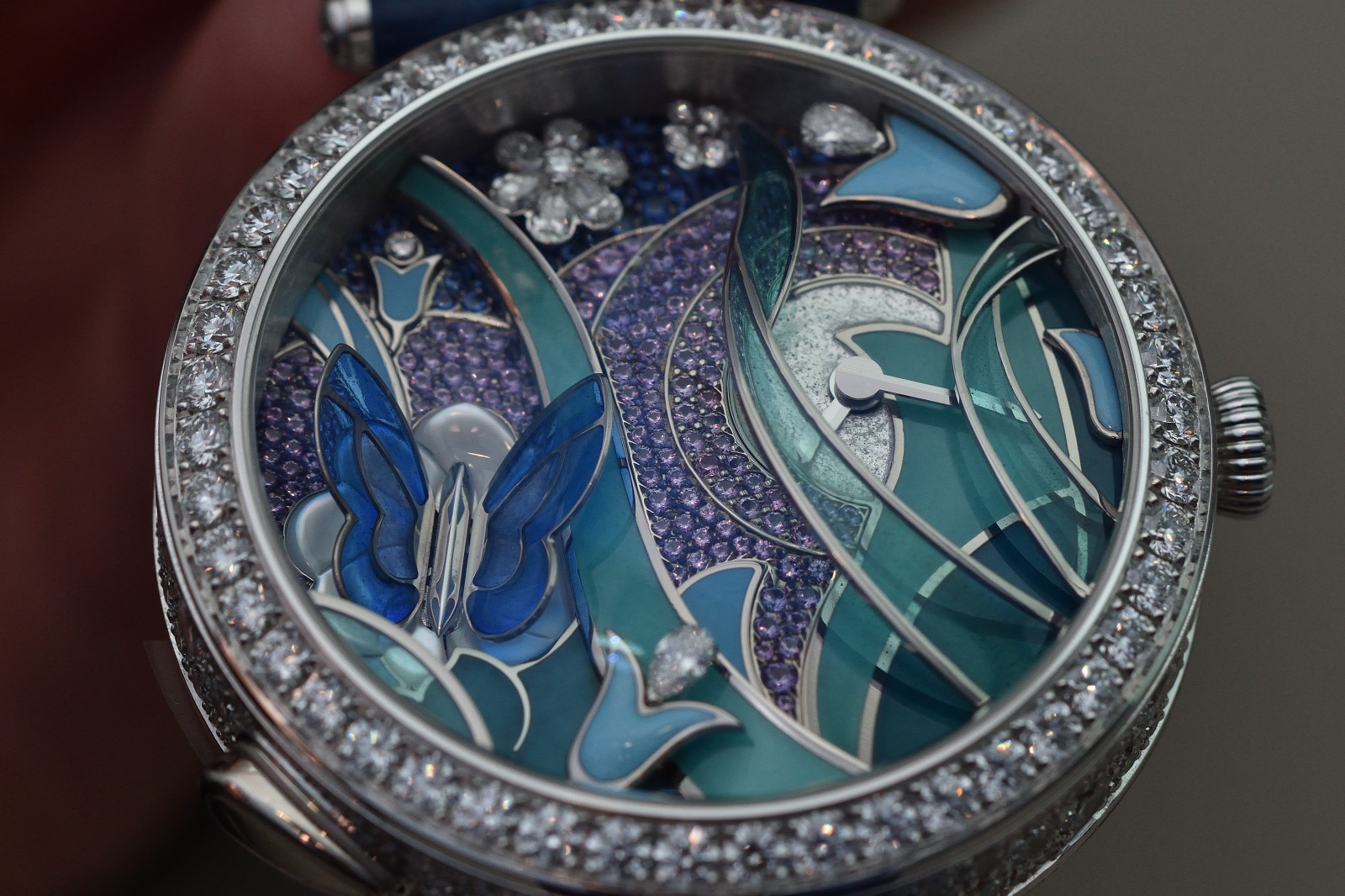 Van Cleef & Arpels continued the tales in the Enchanting Nature and created new masterpieces in the “Poetry of Time” watch collection.

Two breathtaking automata stole the show at SIHH 2017, incorporating two beloved figures of the Maison: the fairy and the butterfly.

The Fée Ondine Automaton table clock is an extraordinary object of art created with an intense collaboration with engineer François Junod and with the outstanding savoir-faire of numerous craftsmen. See this video to discover the Fée Ondine Automaton, which integrates high-jewellery making, lapidary, enamelling, sculpting and fine watchmaking. 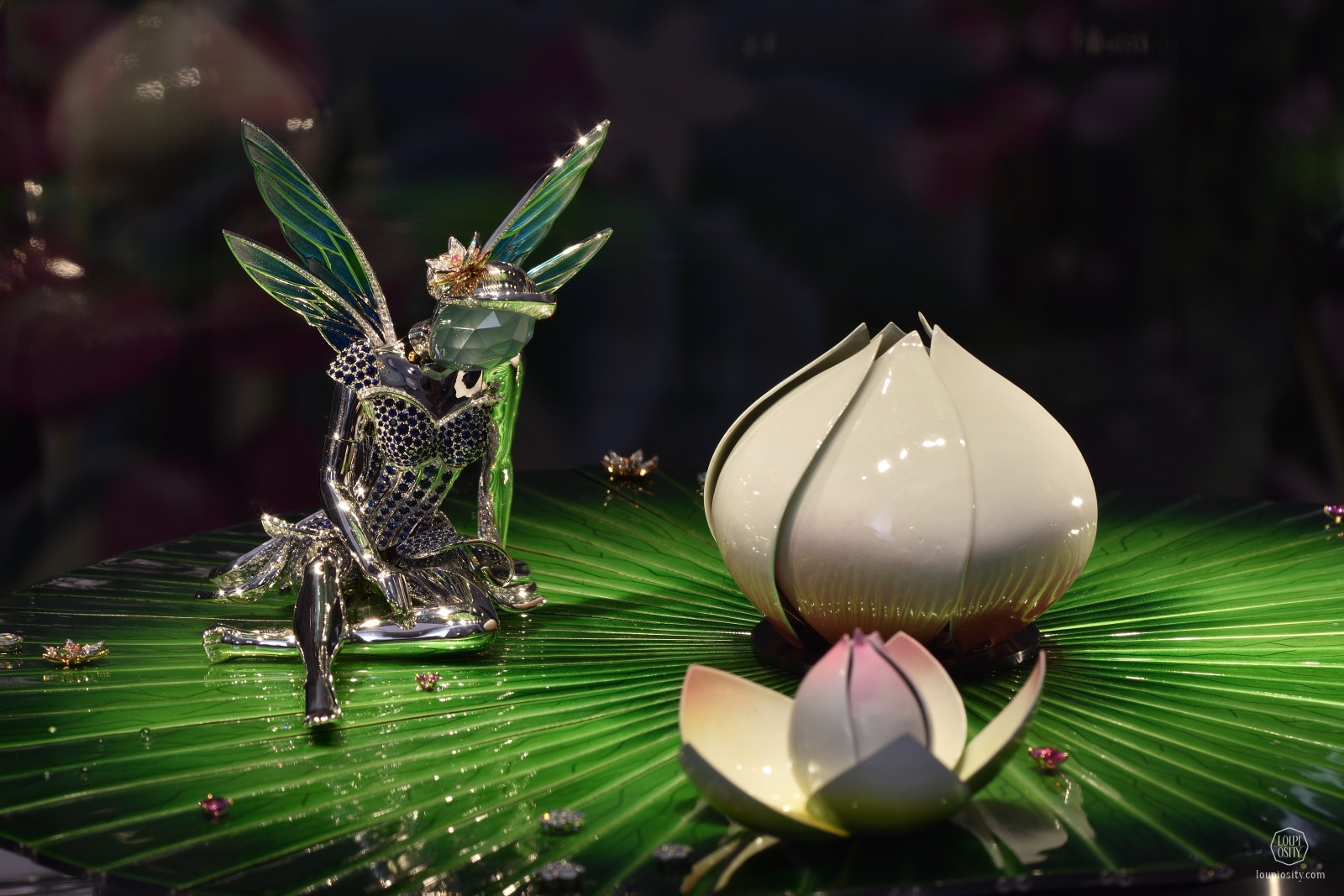 The new timepiece brings a little blue butterfly alive, fluttering its wings at a realistic pace and in irregular intervals. As an additional curiosity, the wing movements are influenced by the movements of the watch’s wearer.

The “base” of this creation is a 40mm white gold case with diamonds (in the so-called serti-neige or snow setting). The dial portrays a peaceful landscape; the moon is rising over a little pond surrounded with flowers and long blade of grass. The butterfly sits on a flower and beats delicately with his wings. 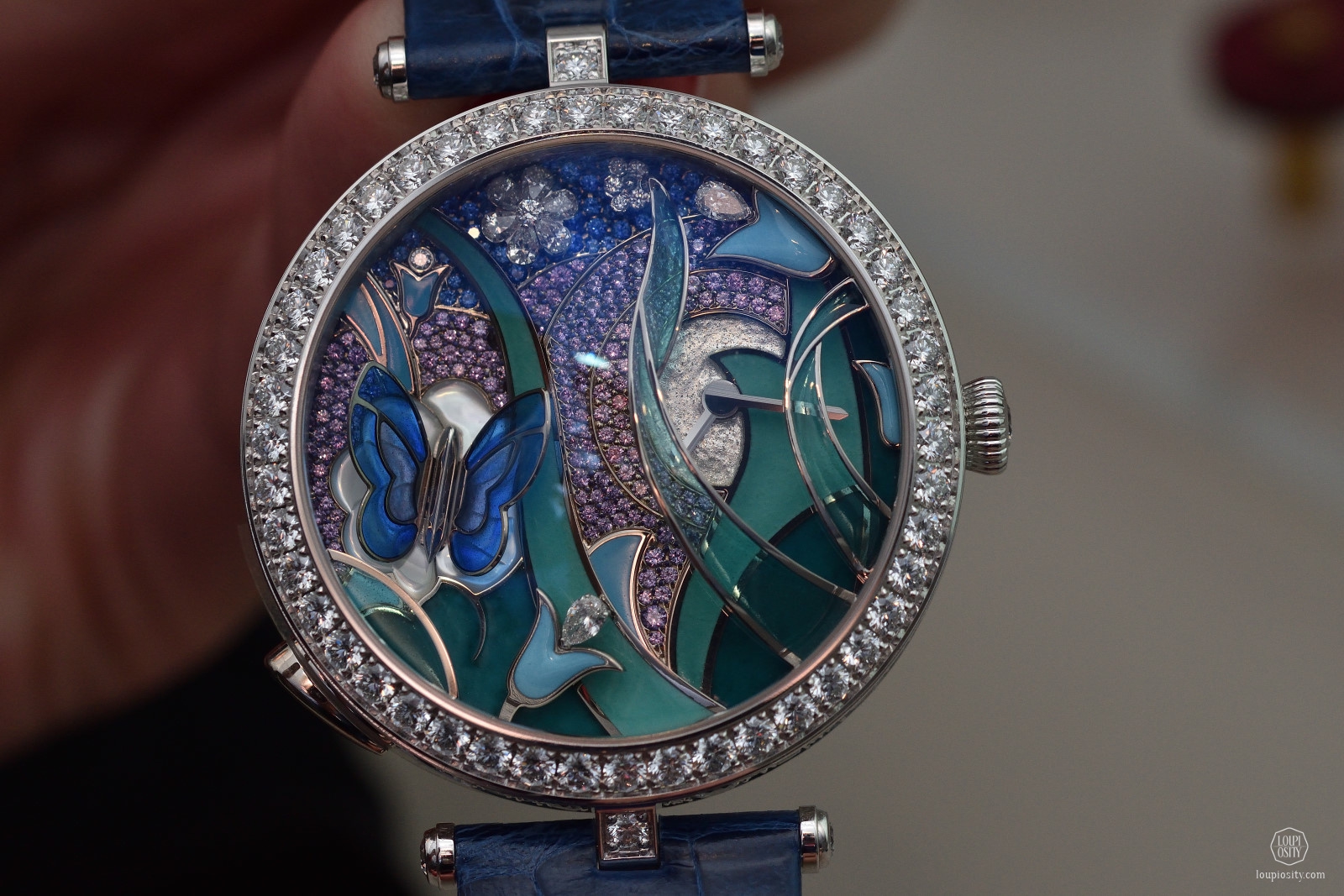 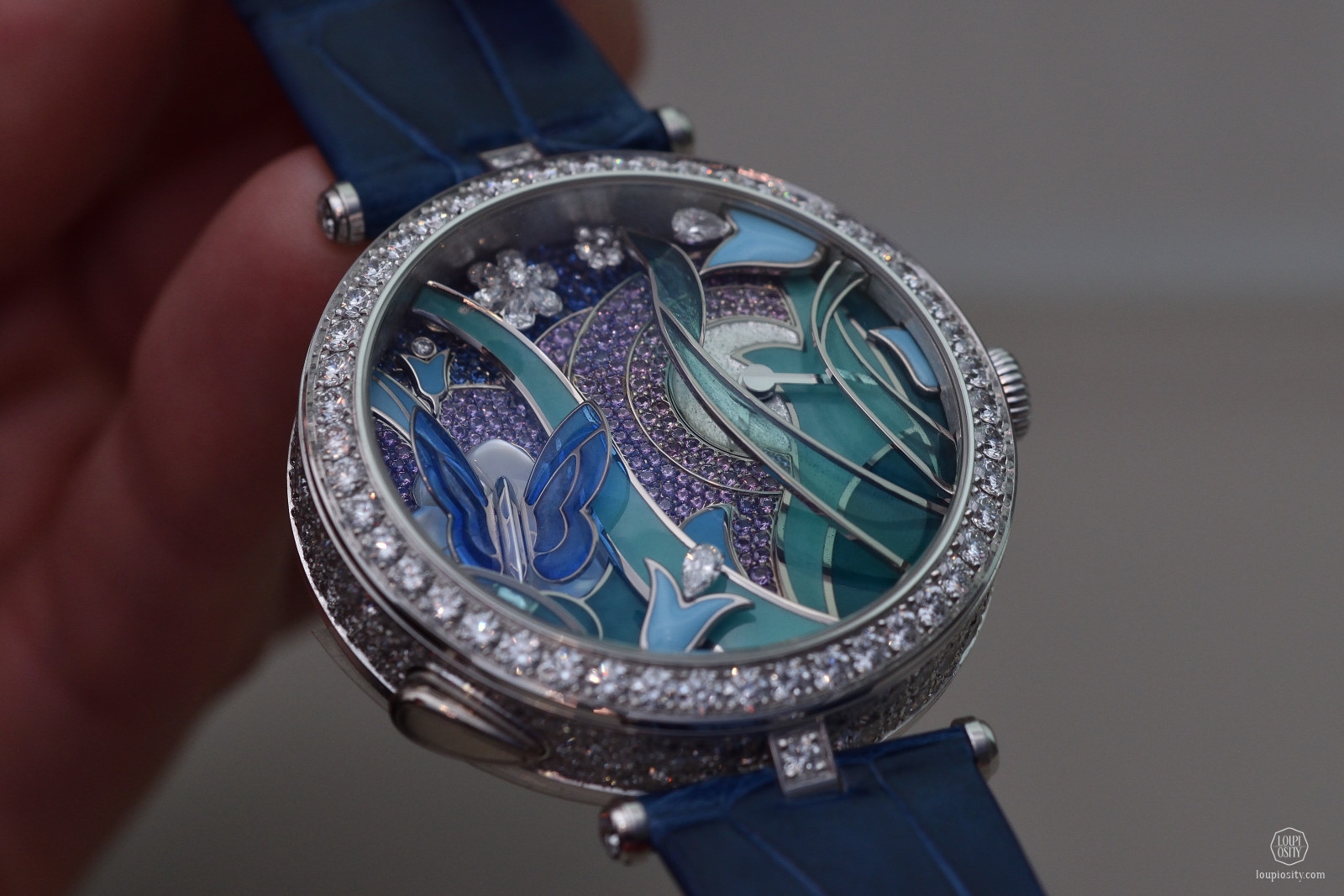 As we have already become used to it from Van Cleef & Arpels, the creations bring together many artistic skills – this time different enamel techniques, miniature painting and sculpting as well as engraving.

The papillon found his place on a subtle white flower made of sculpted mother-of-pearl. His wings are coloured with two shades of plique-à-jour enamel.

The grass and leaves are adorned with champlevé enamel, with the exception of rounded blades of grass, which are decorated with a greenish-blue gradation in curved plique-à-jour enamel. This technique has its difficulties in itself but the craftsmen of Van Cleef & Arpels developed a new version. They bended the leaf in order to create a three-dimensional form of the motif to follow the line of the domed dial.

The moon is in paillonné enamel, while its reflection on the water is set with blue, mauve and violet sapphires. The surrounding flowers are composed of enamel and round and pear-shaped diamonds. 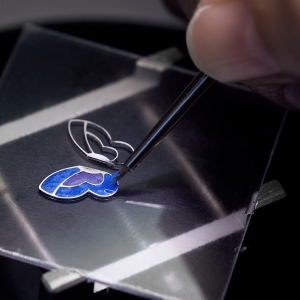 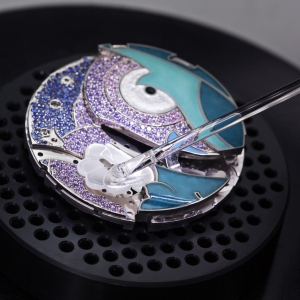 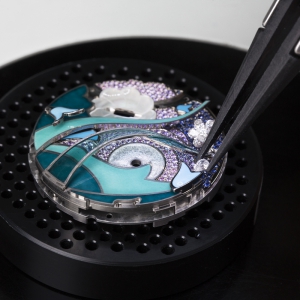 A few enamel techniques
During Champlevé, the moist powder enamel is applied to the engraved patterned metal surface, thus the enamel seeps into the patterns, and it is then fired. During the creation of the base metal pattern, extremely high quality requirements have to be met, because even the smallest unevenness can prevent the appropriate binding of the enamel. When the surface has cooled, it is polished with very fine sandpaper. The un-carved portions of the original surface remain visible as a frame for the colourful enamel designs. (Champlevé is similar to the Cloisonné technique, but in the latter case there are small wires added on top of the metal to create the enamel compartments).

The Pailloné technique is also a form of enamelling but a very thin precious metal foil – a “paillon” – is placed between the two layers of enamel. Due to the transparency of the enamel the foil lends a shiny and statuesque surface to the dial. The first step in the process is cutting the paillon (a piece of foil). Then the paillon that has been cut to shape is placed on the dial, adjusting it to its later position. Under a magnifier the foil is coated with the enamel technique (a coating made of melted and fused glass powder) and the whole piece is fired at a high temperature.

Plique-à-jour enamel enables the light to shine through the transparent or translucent enamel, like in the stained glass windows. This technique is similar to Cloisonné (see above) since the enamel is applied in cells but no material is applied on the reverse of the enamel.

Time to time the VCA Maison surprises the fine watchmaking world with very special complications. Let it be the Midnight Planétarium Watch revolving the planets of the solar system on the wrist in real- time, or the Lady Arpels Ballerine Enchantée Watch with time on demand by the ballerina’s tutu gracefully indicating the hours and minutes.
The Lady Arpels™ Papillon Automate watch is also an horological feat, the calibre has been the object of four patent applications by Van Cleef & Arpels.

The butterfly can move his wings on demand by pressing a button at 8 o’clock, but they come into movement also randomly thanks to an irregular wheel. The cogs’ uneven arrangement on the wheel induce the wing stroke more than a dozen times in an hour in an irregular pattern. The number of the flutters depends on the power reserve too – with more reserve the wings beat four times in a row, which reduces to a single stroke at lower energy levels.

The frequency of his wings’ movement depends on the wearer too. The winding rotor of the automatic movement speeds up the rotation of the irregular wheel by a differential mechanism, which makes the butterfly become more active.

If you look at the butterfly, it sits very deeply in the base of the 3D watch face, spreading the wings wide. This layout is a remarkable design and engineering feat, since the movement of the wings had to be solved within a very tiny space underneath. The rotational movement of the wheels is transformed to horizontal movements by two levers, which are connected to the wings on swivelling joints. 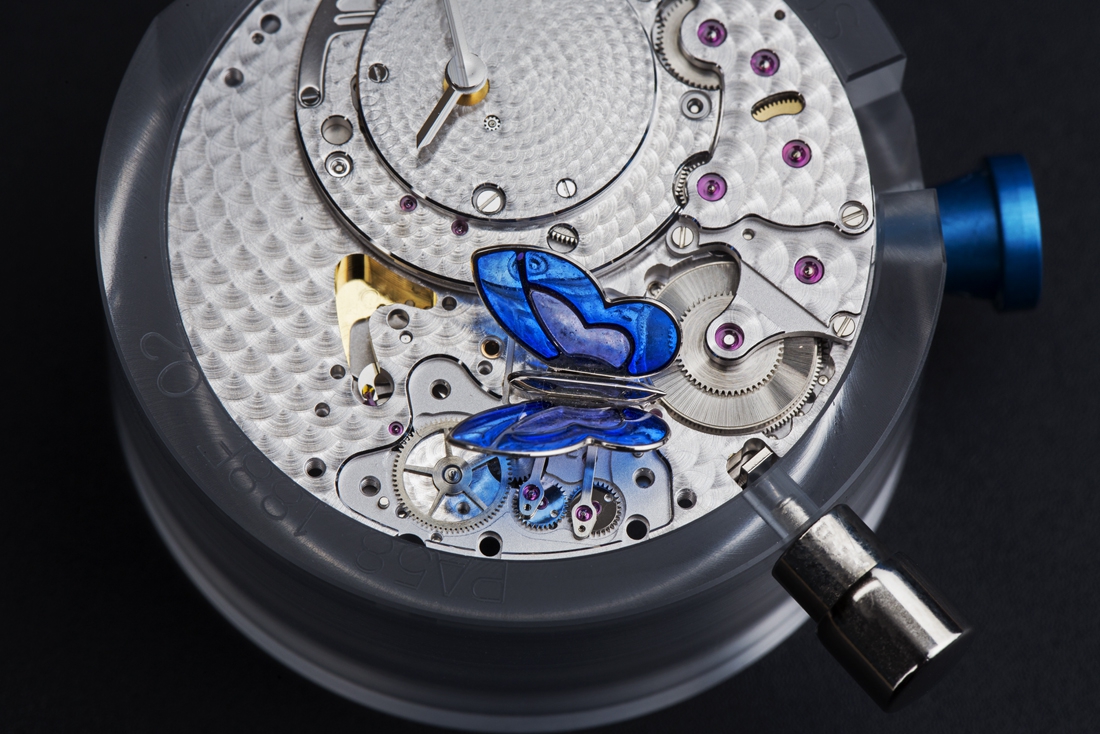 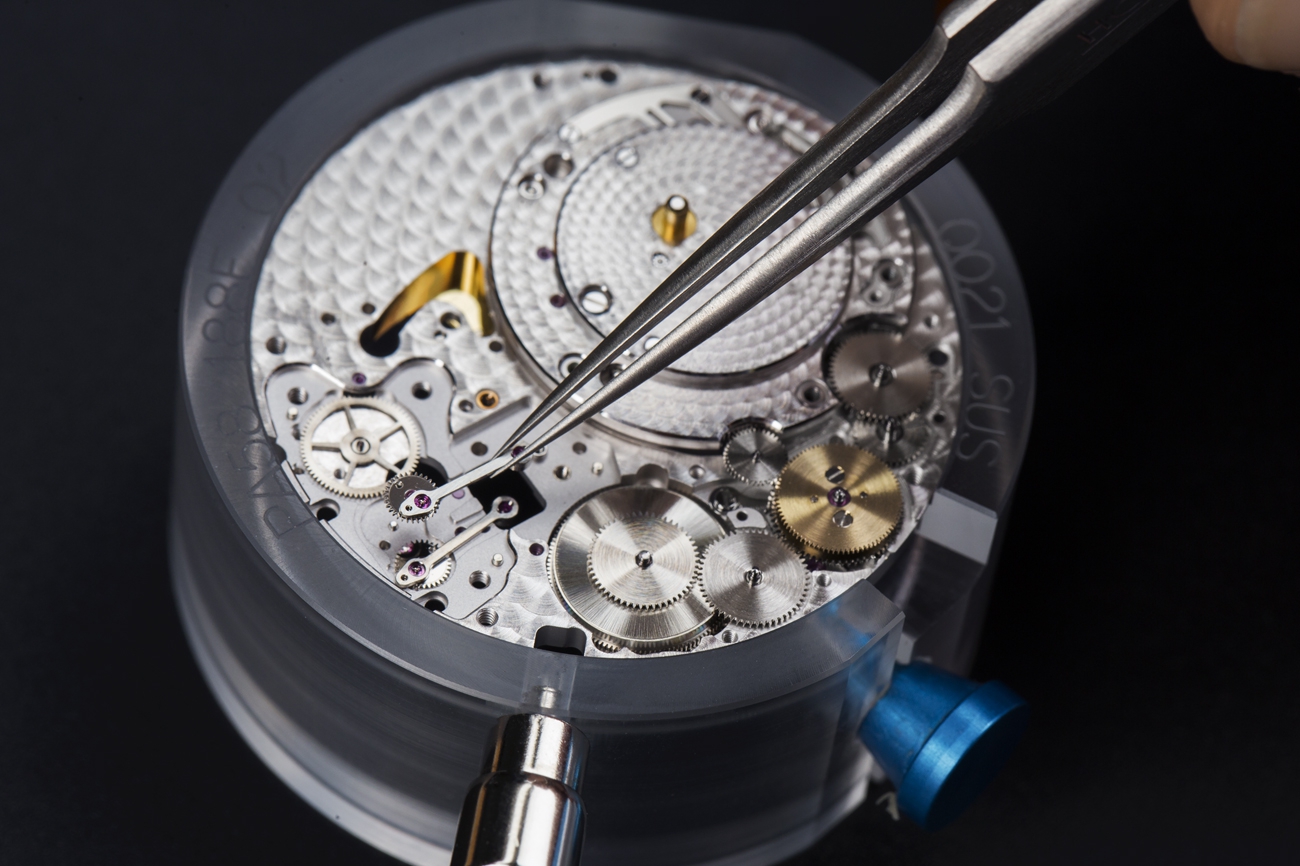 Engraved Gems at L’École, School of Jewelry Arts This June we are finally back to Paris - first of all to participate in the Révélations 2022 but of course there is always so much to discover there. Among other exciting events, we visited the Engraved Gems exhibition at L’École, School of Jewelry Arts just around the corner from Place Vendôme.#GPHG2020 The 84 pre-selected watches of the GPHG2020 are competing for the "Aiguille d’Or" Grand Prix or for one of the prizes in the 14 categories that reward contemporary watchmaking excellence.'Details: Genealogies of Ornament' - Homo Faber 2022 The ‘Details: Genealogies of Ornament’ is set in the Nautical School area at Fondazione Giorgio Cini. It is one of 15 exhibitions that comprise the Homo Faber Event 2022, organised by the Michelangelo Foundation.