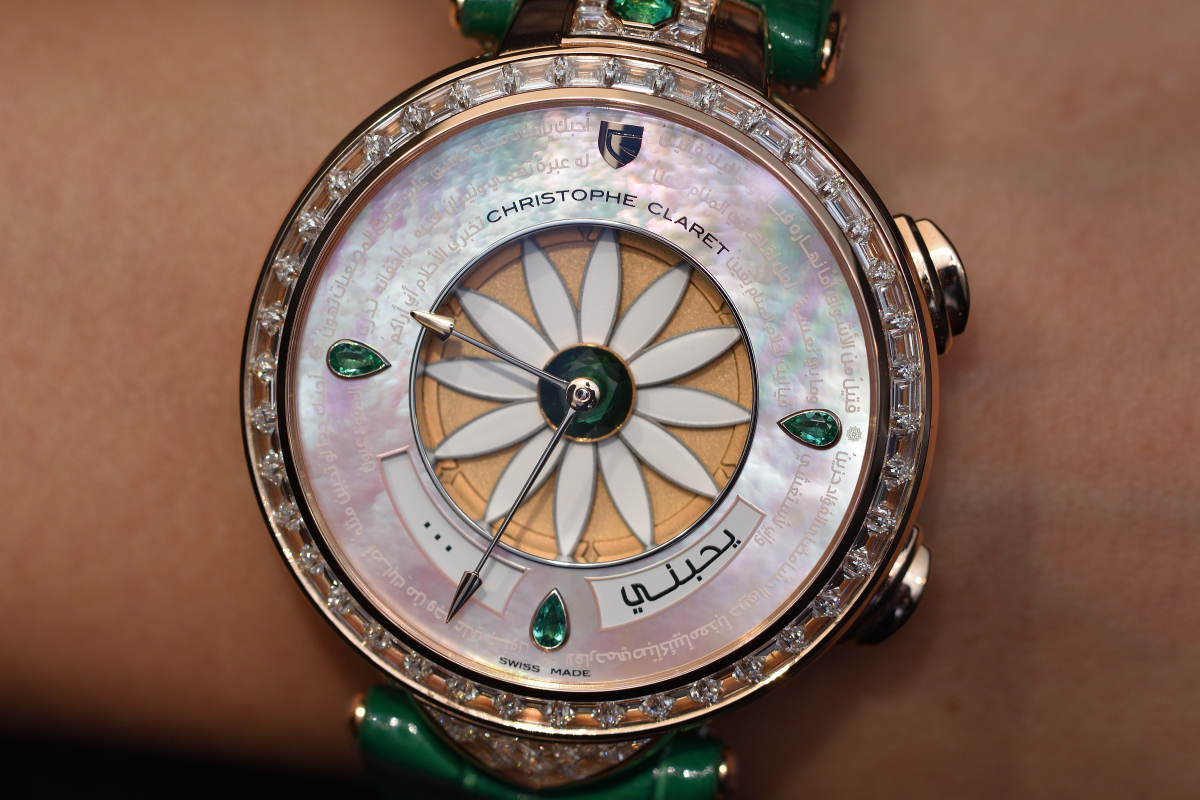 The engineering talent of Christophe Claret has surfaced in interesting mechanical animations and horological designs throughout the years, making him a sought after watchmaker. Mr. Claret infuses traditional mechanical solutions with creative new ideas and contemporary materials.

He is one of the rare independent watchmakers too, who has dedicated his attention to women with an affection for complex mechanical timepieces born with them. His Margot, which we met with at Les Ambassadeurs, even earned the Ladies’ High-mech Watch Prize of Grand Prix d’Horlogerie de Genève (GPHG) in 2014.

This article is dedicated to his latest creations Layla, the new Art Pieces and the white and 5N red gold damascened steel version of his well-known X-TREM-1.

Cristophe Claret integrated romanticism, poetry and fine watchmaking in his latest series for women. The look and the style are perhaps not everyone’s cup of tea but the pieces definitely belong to an elite range of high-end ladies’ complicated watches.

Marguerite bloomed in Summer of 2015 making the petal dance with a different mechanism. The idea of the watch was to provide a similar look but a more affordable alternative to the Margot (nearly one third of Margot’s hefty 200,000 CHF price tag). In this piece, petals do not disappear, but circulate to the rhythm of the hours – the butterfly sitting on a petal and dipped into super-luminova is the hour hand. Minutes are shown by another butterfly balancing on the stalk. 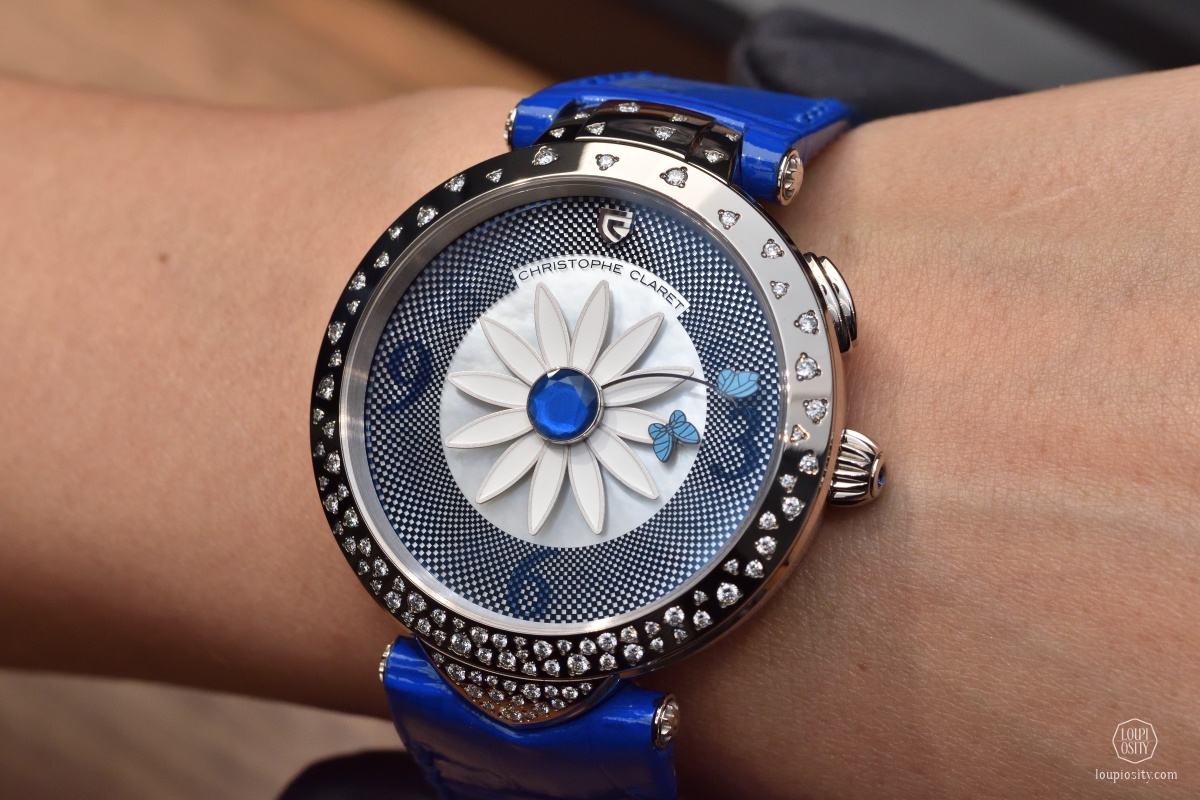 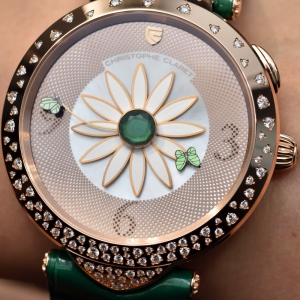 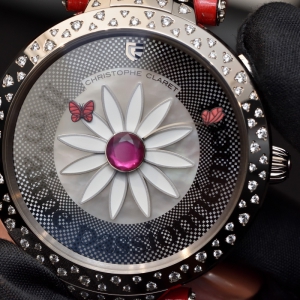 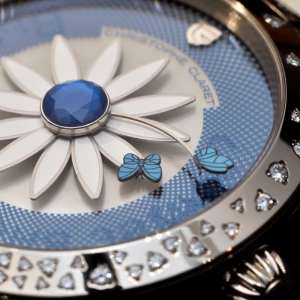 Layla, the Arabic version of Margot was presented in Qatar at the Doha Jewellery & Watches Exhibition earlier in 2016. It continues the “plucking the daisy” concept of Margot with a middle-eastern twist.

A light pink mother-of-pearl dial frames the flower and it is decorated with a delicate engraving of “Layla and Majnun”, the verses penned by Qays ibn al-Mulawwah ibn Muzahim.

Qays ibn al-Mulawwah ibn Muzahim was a Bedouin poet who fell in love with a girl called Layla Al-Aamiriya. Layla’s father did not allow them to marry and gave her daughter to another man. Qays’ obsession with the girl made him spiral into madness, hence the name “Manjun”, meaning madman. The “Layla and Majnun” love story originates from Northern Arabia from around 680 AD., but it has many variations, including Persian, Azerbaijani, and Turkish. It even inspired contemporary artists, like Eric Clapton for his 1970 song Layla.

The dominant colour of the watch is the bright green, combined with pink gold and the pink mother-of-pearl on the dial.

It is operated by a new adaptation of Margot’s movement to allow a right to left appearance of script. With a press of the pusher at 2 o’clock a petal or a pair of petals disappear. Once all are gone, the window at 8 o’clock shows the answer to the evergreen question: he loves me or he loves me not? If you don’t like the outcome, you can always play a second round.

The Layla is limited to 20 pieces. 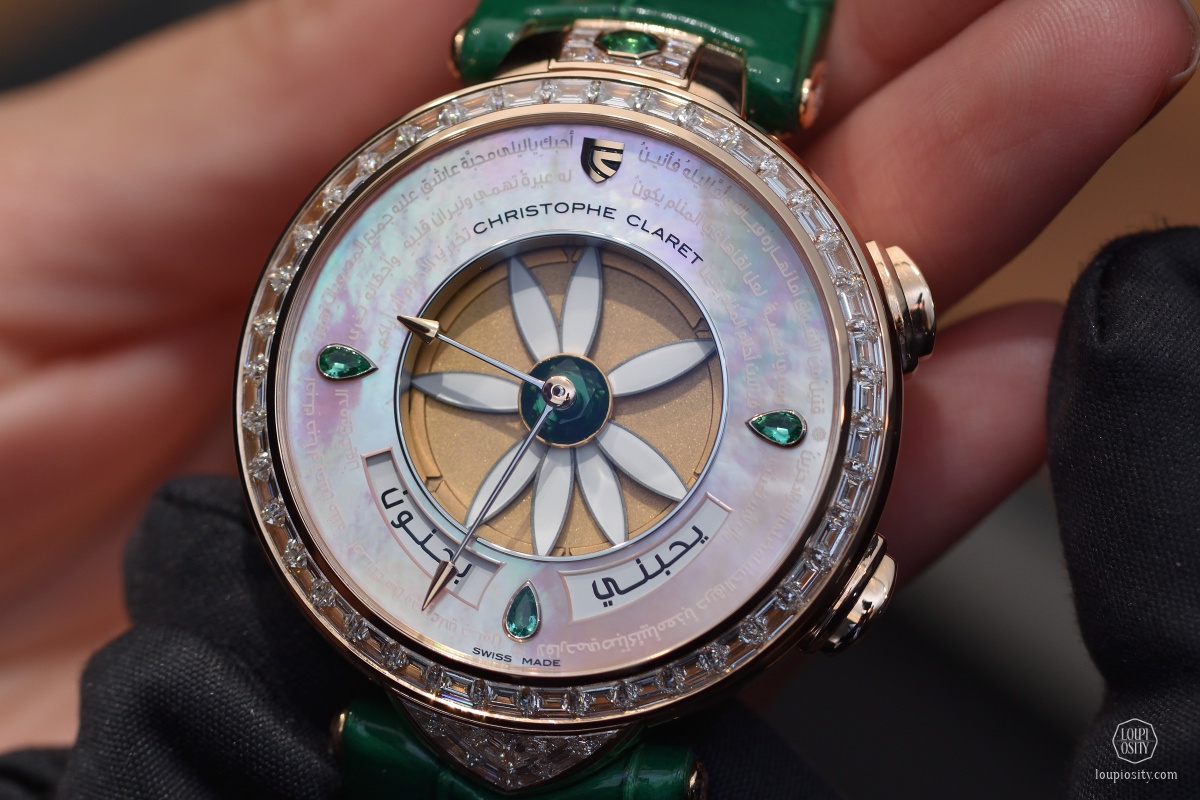 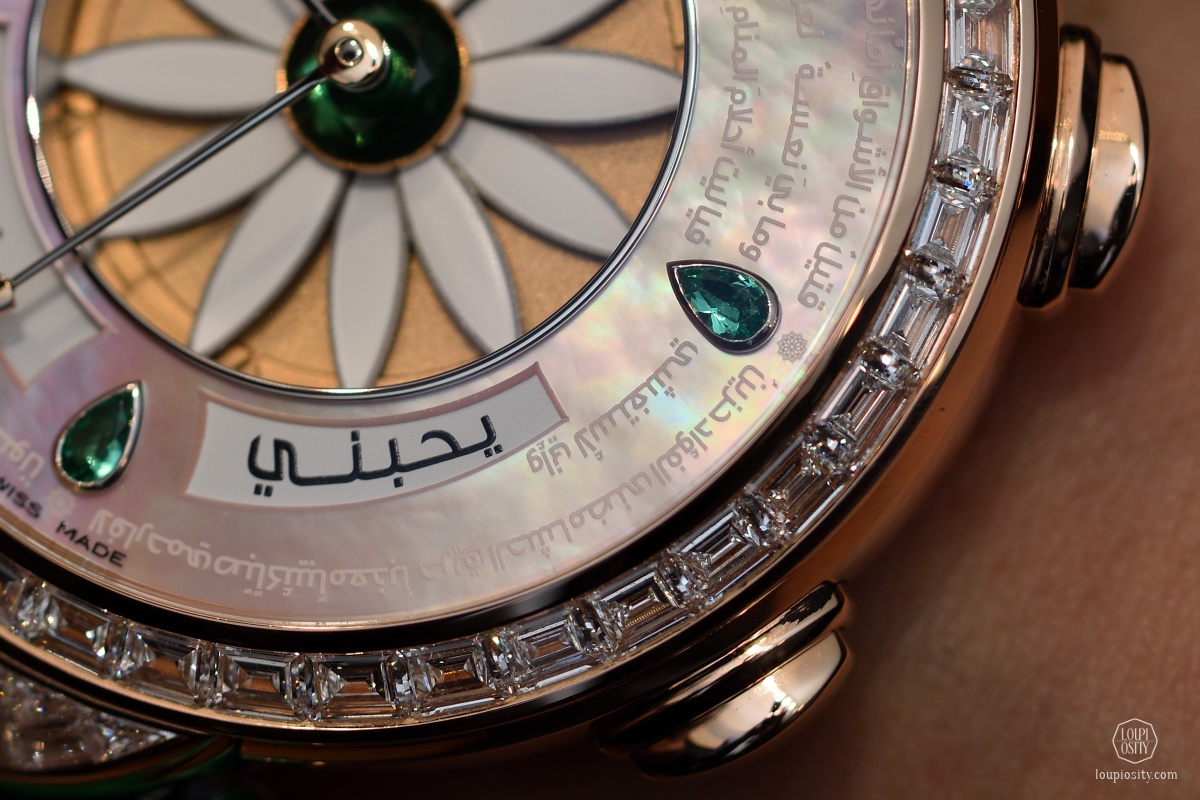 The brand has many special creations such as the X-TREM-1, the Aventicum or the Gaming collection – all in limited series. But there is one movement which is preserved for unique pieces only, the CCR97.

New creations were made this year with this calibre in white gold and with the back side adorned by a Falcon and horses. On the dial side you can see the beautiful movement with tourbillon, the hand-engraved bridge front of the barrel, blue screws and blue hands, framed by baguette-cut diamonds and sapphires.

The back of the watch is a little enamel masterpiece with a portrait of a falcon and two white prancing horses. 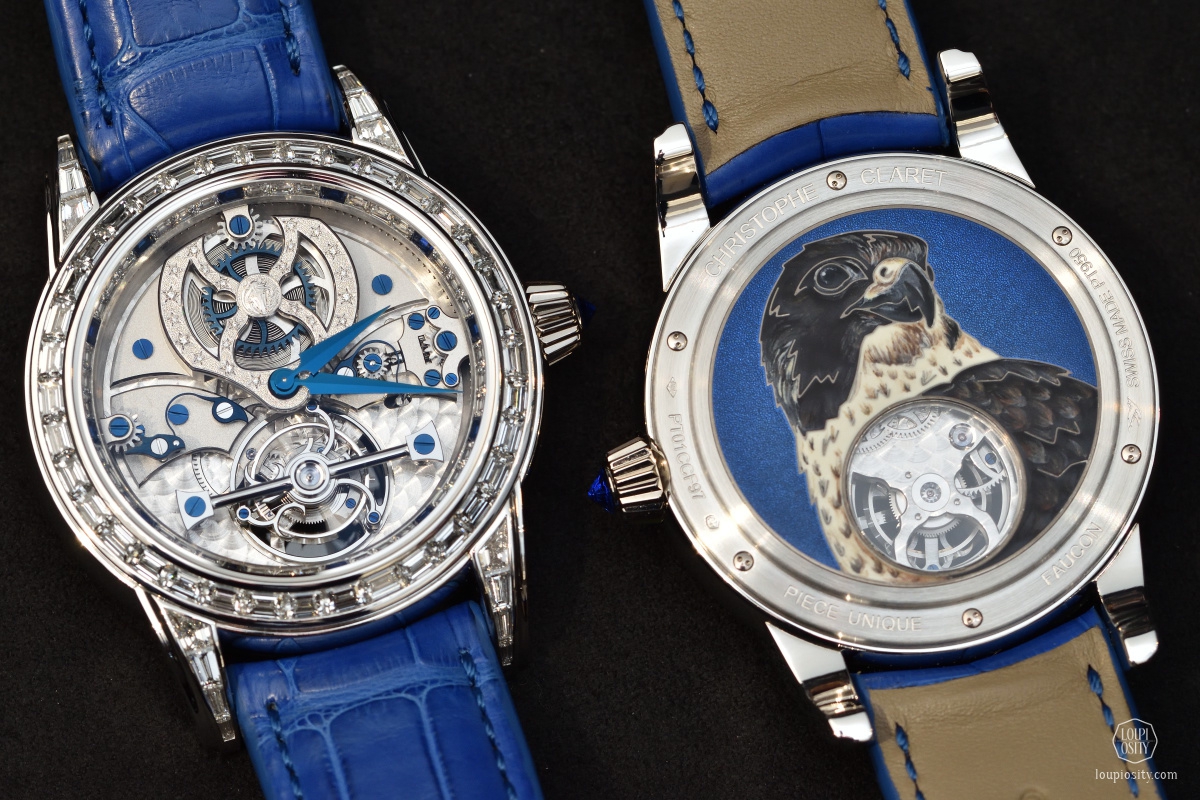 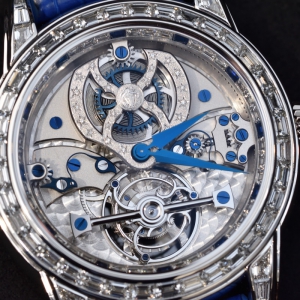 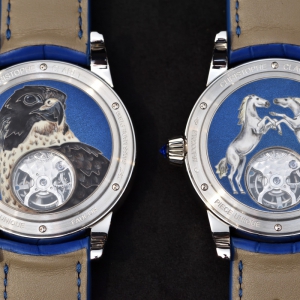 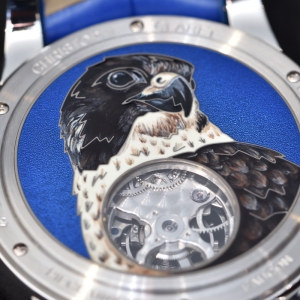 The idea of the Extreme Watches collection is creating unconventional and avant-garde timepieces. The first X-TREM-1 debuted in 2012 and its name well describes the concept: X for Experimental, T for Time, R for Research, E for Engineering, M for Mechanism.

This amazing piece includes a flying tourbillon inclined at a 30° angle. Hours and minutes are indicated by 2 tiny hollowed steel spheres, isolated within sapphire tubes on the left and right sides of the case-band. They are in a magnetic field, and so move with no mechanical connection. The magnetic field is generated by two miniature magnets moved by extremely thin and flexible cables. The technology was developed with the School of Business and Engineering Vaud (HEIG-VD) in Yverdon-les-Bains. See more here. 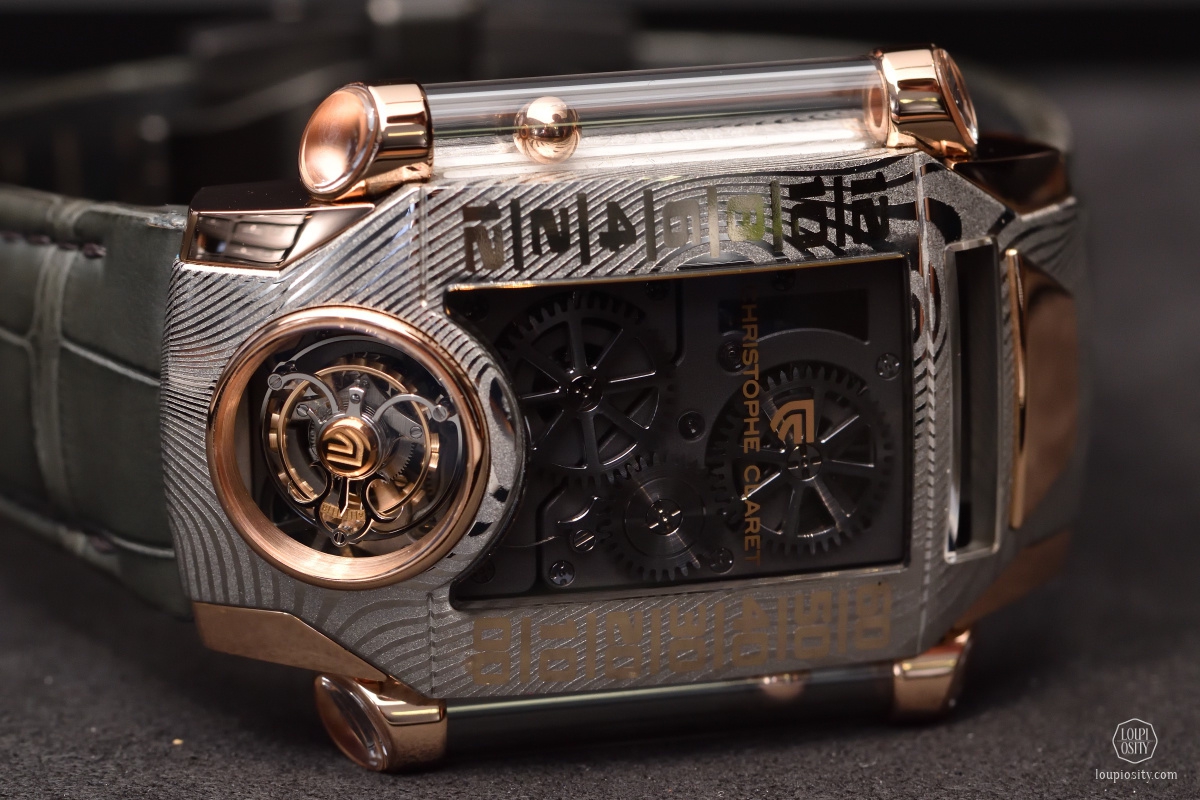 Since its birth the watch had a few variations, such as white gold with slate blue Grade 5 titanium, 5N red gold and black PVD-treated grade 5 titanium or chocolate brown PVD titanium and red gold, each in an 8-pieces limited series. The brand also supported the Only Watch auction in 2013 with a special version, the “X-Trem-1 Pinball For Only Watch 2013” in royal blue.

The latest timepieces are white gold or 5N red gold and damascened steel with an anthracite alligator strap.

Damascened steel is a form of steel having typical wavy patterns, developed in Middle Eastern countries and used chiefly in sword blades due to its qualities. These swords were known for being extremely resistant and sharp.

This “experimental” material is quite an interesting choice for this experimental timepiece. 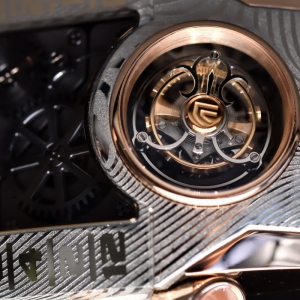 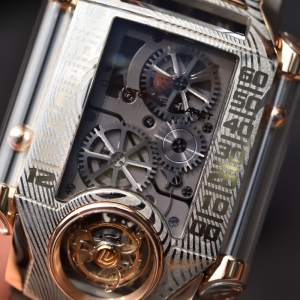 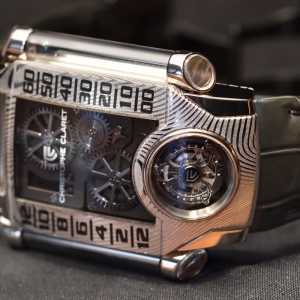 If you want to check these out yourself, you can meet Christophe Claret at the Dubai Watch Week in Autumn 2016, and in few months at the SIHH 2017, which will offer public days. I bet new wonders are on the way, too.