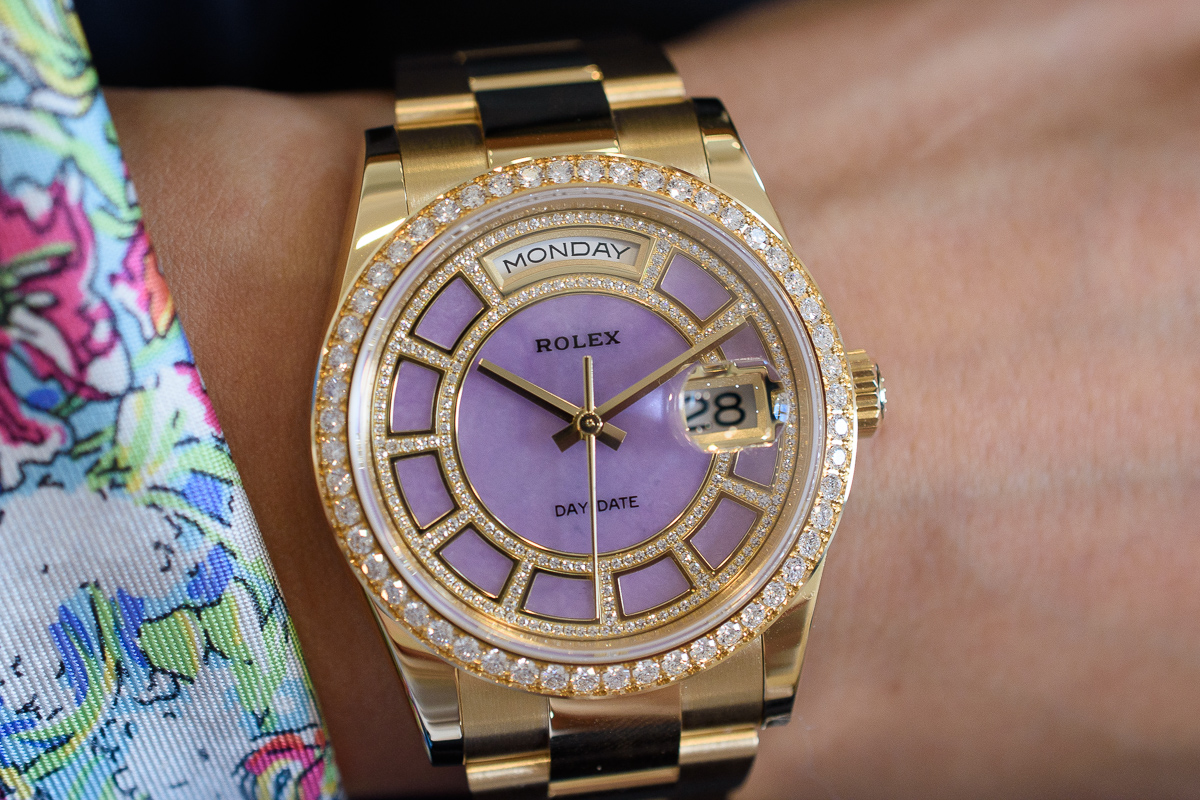 After the grey winter months, Rolex filled the April Baselworld with new colours. In recent years fortunately the company has allowed itself to be creative once again with different, sometimes even astounding colours, which I believe has a positive effect on the way they are perceived. The new coloured Day-Dates and Daytonas have become available at Petite Genève, and we passed by to greet them.

Rolex prices have exploded at many auctions in the past ten years, and sales included colour dialled pieces, which have experienced a “comeback”. The heydays were in the seventies, when the company issued a number of references with extraordinarily coloured lacquered dials and others made of stone or wood.

In 2006 Antiquorum sold an 1803 Oyster Perpetual Day-Date in yellow gold with a lacquered Stella green dial breaking the world record back then with CHF 40,120. Christies sold a ca. 1991 Ref. 18206 blue Stella platinum version for CHF 68,750 in Geneva, followed by the latest Phillips Geneva Watch Auction: Three with a similar model from 1998 for CHF 70,000.

At last year’s Phillips Glamorous Day-Date auction a yellow gold Day-Date (reference 1802) with very rare yellow Stella dial (nicknamed the ‘Taxi Driver’), from 1973 was sold for CHF 275,000 – nearly four times its estimate value. On the same event, a pink gold Day-Date (reference 1804) with Royal provenance was sold for CHF 191,000. It originated from 1975 upon special order of the Omani Sultan Qaboos Bin Said Al Said and has a burgundy Stella dial with the green Khanjar (the national emblem of Oman). The case back bears the initials KR for Khimji Ramdas, the Omani Rolex retailer.

In 1956, the Oyster Perpetual Day-Date made its debut. It was the first wristwatch to display the date and day of the week. These models are available exclusively in 950 platinum or 18k gold created in Rolex’s own foundry.

The Day-Date has seen an extraordinary variety of dials, watch cases and bracelets. One of these examples is the so-called Stella dial, produced for a short period during the 1970s. The colours are diverse; oxblood red, turquoise, blue, green, light mint green and even yellow. Some pieces with a wooden dial from the 80s or colourful hard-stone dials (such as lapis lazuli, onyx, green Jasper, malachite, red agate) – mainly from the 70s. The latter collection was originally designed for the Middle Eastern market, but grew in popularity all over the world.

In 2013 Rolex presented a new collection of the Day-Date with coloured dials. For the first time the timepieces had matching leather straps to the cherry, cognac or green dials.

In 2015 Rolex presented the Day-Dates with lighter colours: two of my favourites were the 950 platinum model with ice blue diagonal motifs on the dial, and the Everose version with sun dust stripes. The Oyster Perpetual models went in the opposite direction with stronger red grape, champagne, olive green and blue colours.

This year Rolex celebrates the 60th anniversary of the Day-Date with the hallmark colour of the brand: green. The bright green dial is set in a white gold or Everose gold case and is flanked by a fluted bezel. The centenary model was given the President bracelet, of course. 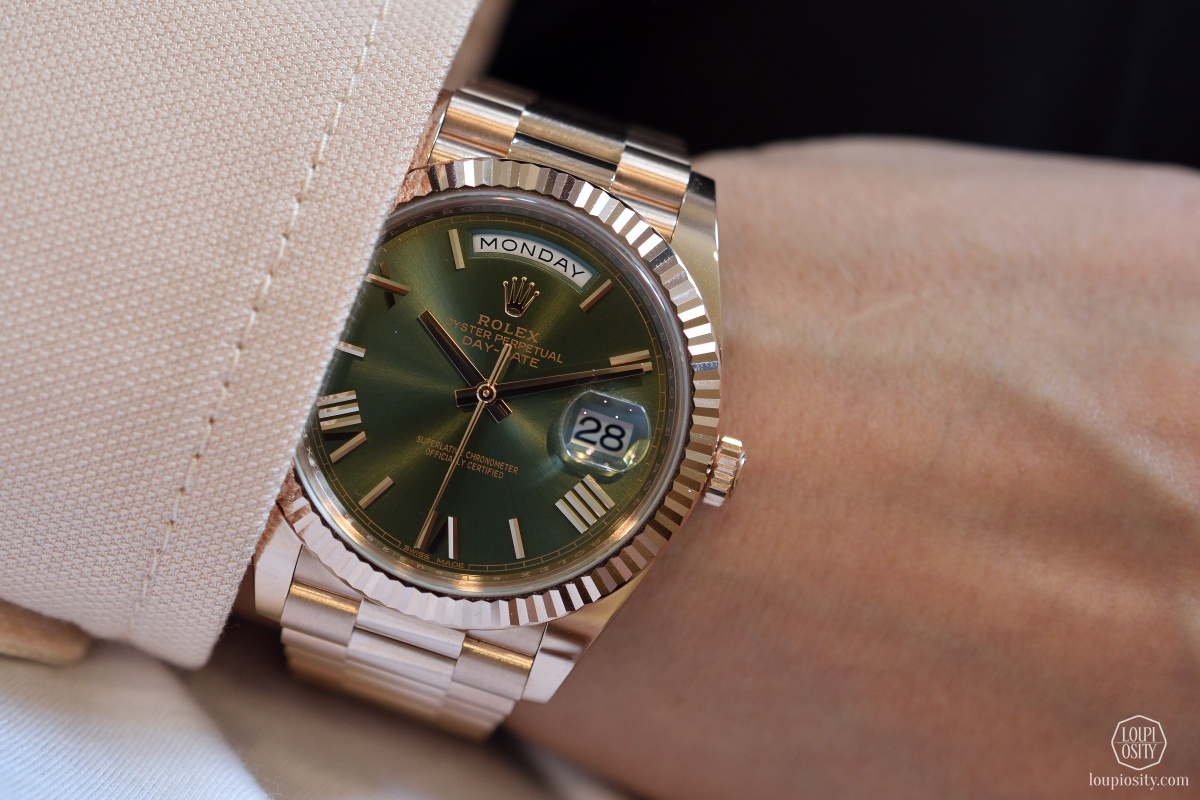 I just love the new 36mm Day-Date “Sertie” yellow gold models, which remind me a little of the hard-stone Stella dials. The diamond-set bezel frames the green jade or lavender jade. The jade carousel dials feature an open-worked design, having the yellow gold hour ring set with 217 diamonds and inlaid with green or lavender jade. In Chêne-Bourg (a municipality in the Canton of Geneva, Switzerland) Rolex has a facility devoted to gem-setting and dial decorations, the company is so proud of. The new jade models are great examples of the eminently high standards applied on dials. 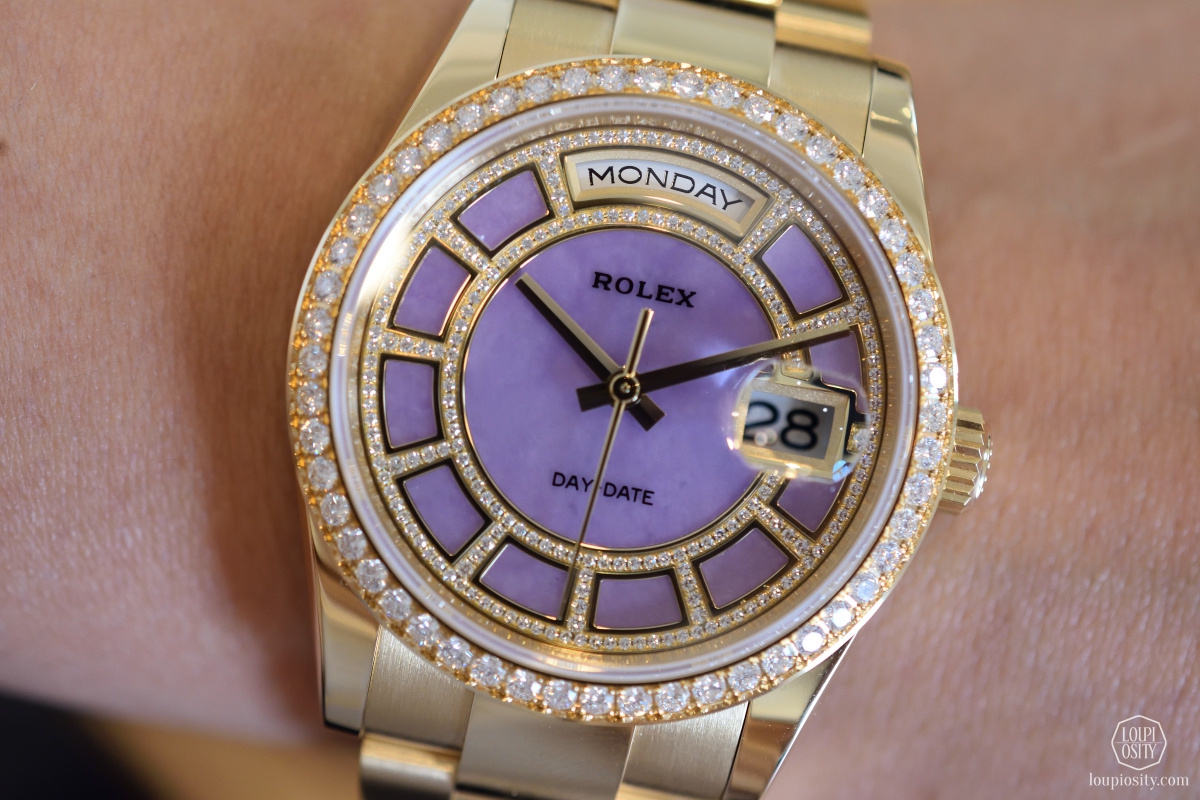 Rolex has been tightly bound to motorsport, including the Daytona car races as well as Formula 1 – both we have previously wrote about.

In the late 1960s Rolex started an esteemed relationship with Sir Jackie Stewart. The “Flying Scot” has been wearing Rolex for about 50 years: he bought his first yellow-gold Day-Date in 1966 and became a Rolex Ambassador in 1968. His wife, Helen wore a Lady Datejust even in a Rolex ad in 1973.

For a long time the Daytona was only available in Everose gold, yellow gold, white gold and platinum. In 2016 the Oyster Perpetual Cosmograph Daytona was released in 904L steel with a monobloc Cerachrom bezel, with white or black dials.

Beside the long-awaited steel models Rolex released two coloured dial versions for the Daytona: yellow gold with a green dial and white gold with a blue dial. They are both equipped with the self-winding calibre 4130 earning the company’s own Superlative Chronometer certification for the model. 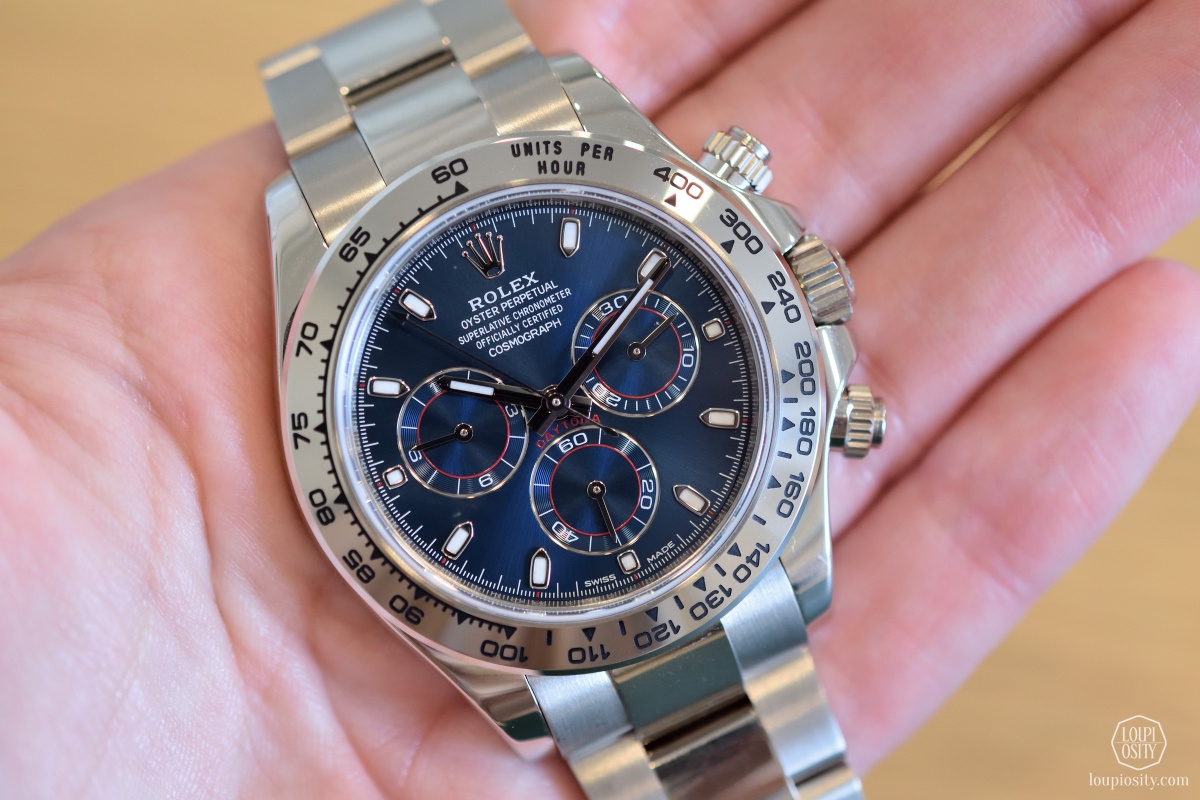 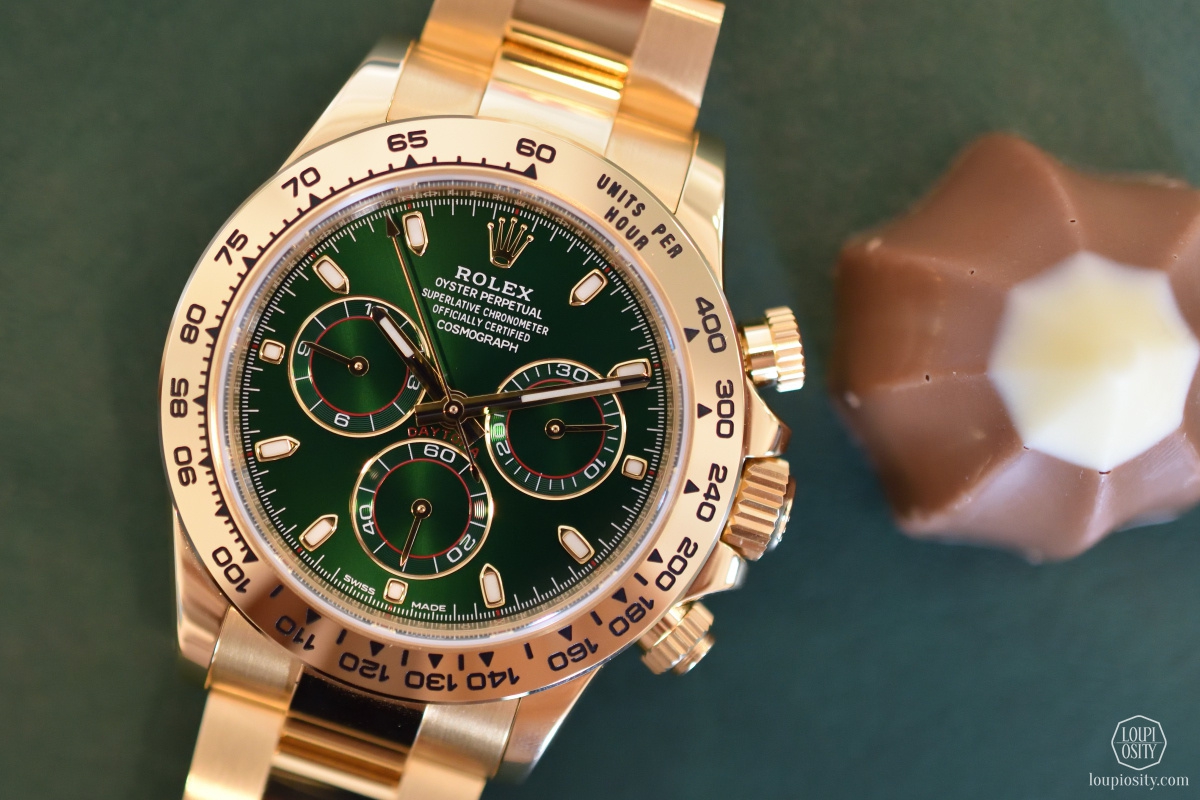 How these will perform at auctions, only time will tell. For now, experience the new models at Petite Genève in their full reality and let me know what you think about them! 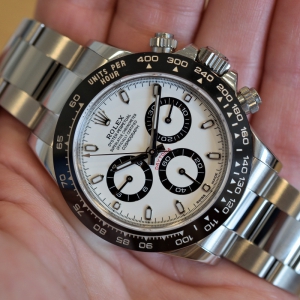 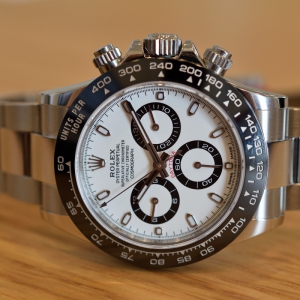 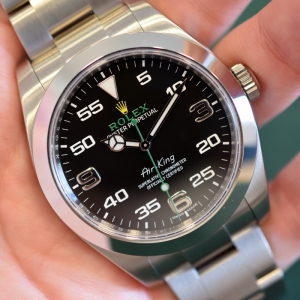 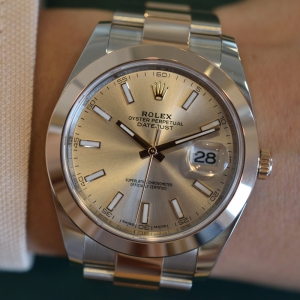 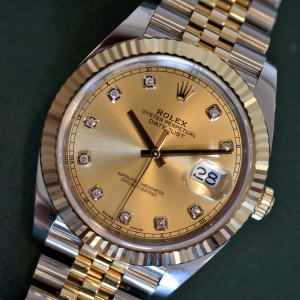 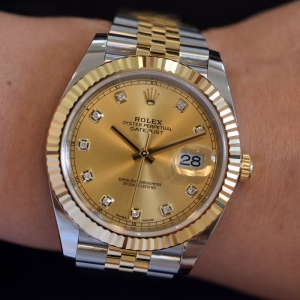 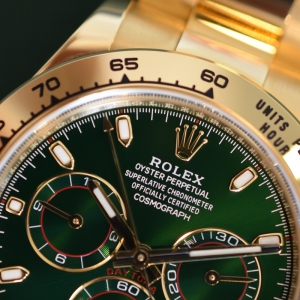 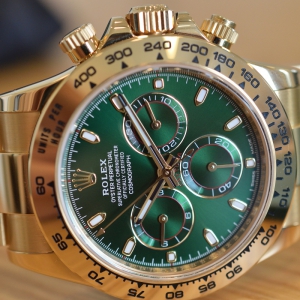 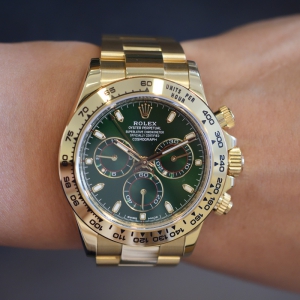 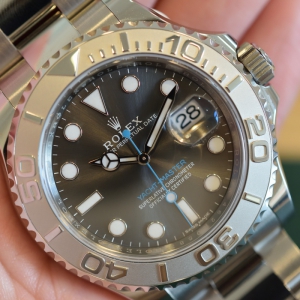 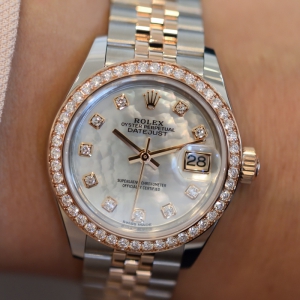 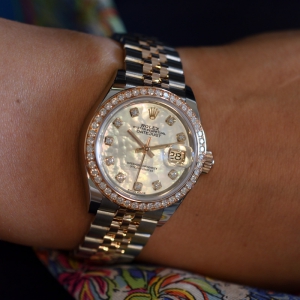 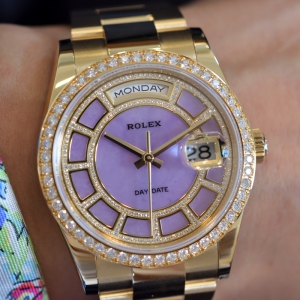 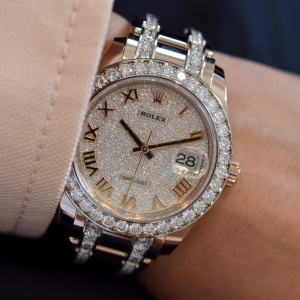 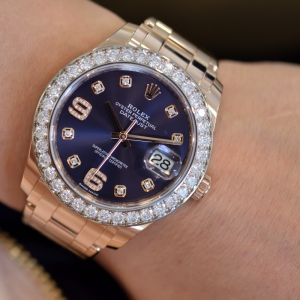 Rolex at Watches and Wonders 2022 At its first Watches and Wonders Rolex unveiled its latest collection of new watches for this year, which includes the platinum Day-Date 40, latest version of the Air-King or the 'southpaw' GMT-Master II.The OAK Collection - Rolex & Independent Chapters 4 out of the 11 chapters of the OAK Collection exhibition are dedicated to pieces of Rolex and independent brands. The vintage and contemporary museum-quality watches include special orders, ultra-rare limited editions and the most valuable examples of particular models. The four-stop exhibition world tour starts in the London Design Museum (19-25 May).Phillips Geneva Watch Auction: XIV Phillips Geneva Watch Auction: XIV will be held on 5 and 7 November in Geneva. There will be two sales events on the two days with very interesting haute horlogerie rarities.