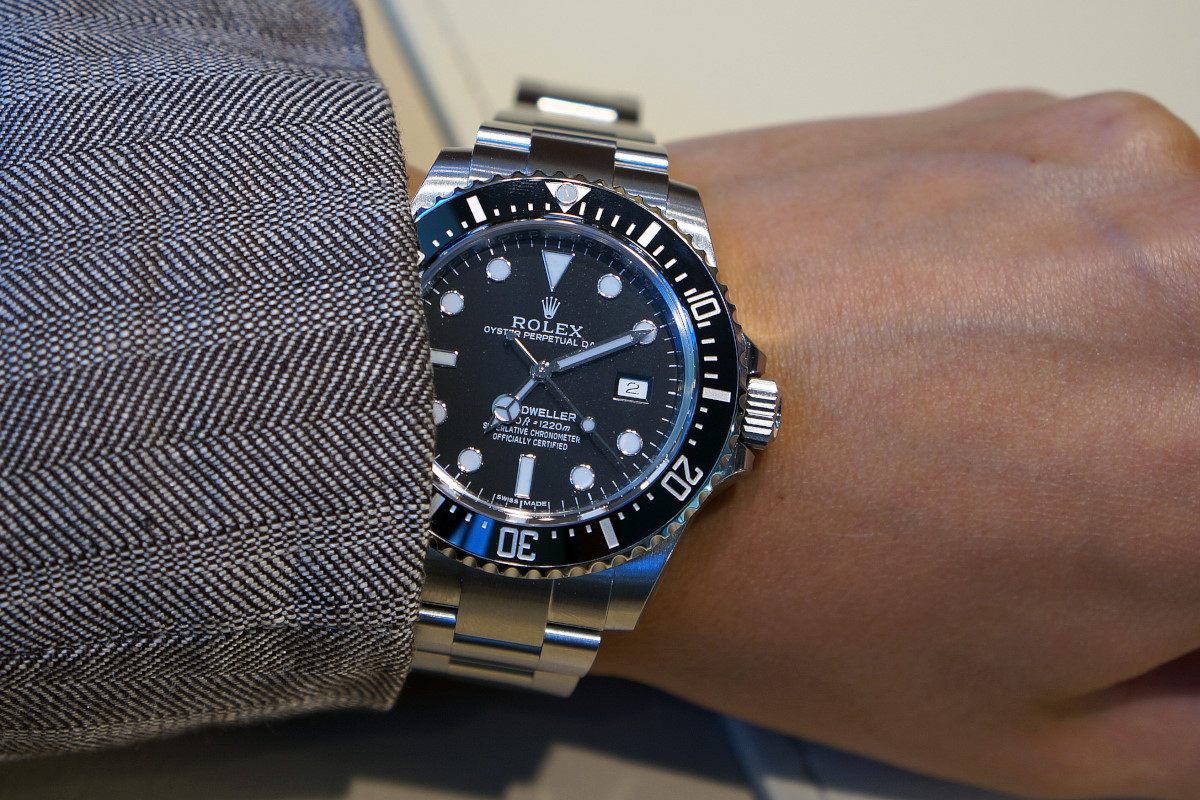 There are watches that were not made to be fashion items, but their existence is justified by a certain professional purpose. In fact, Rolex Milgausses and Sea-Dwellers should never be seen as both were created for people working away from the normal territories. Milgauss was designed for scientists of the CERN – who I imagine to live meters underground seldom surfacing. Sea-Dwellers are best utilized by technical divers working in the non-recreational depths of the sea. Still, both have a great character and some models have really become cult pieces!

I was invited to the Rolex “Petite Genève” boutique to meet them. I have to tell that my first impressions from Baselworld about these stylish pieces were reconfirmed.

Milgauss, as introduced, is not one of Rolex’s mainstream models; it was made with a specific objective for a niche audience.

The first model made its debut in 1956. With Milgauss, Rolex designed a watch for those who work in environments where the electromagnetic fields can significantly hinder the precision of timekeepers, for example in nuclear plants, certain laboratories or in the vicinity of medical apparatus. As there is a large number of Rolex fanatics who like to share their wisdom, it’s easy to find old ads and photos that depict the Milgauss in the 50s. Even on these vintage ads the “radiation safe” quality of the watch received the greatest emphasis.

Rolex created and patented the shield made of ferromagnetic alloys which surrounds the movement in the Oyster case. The Milgauss had a magnetic resistance of one thousand Gauss using a soft iron Faraday cage. So came the name; from the Latin mille, which means one thousand, and gauss, the unit of a magnetic field.

The Faraday cage is an enclosure surrounded with a metal mesh/surface that serves to block the electromagnetic effect into which thanks to the protective quality of the metal mesh the electronic field cannot enter (for example the metal body of an aircraft protects the passengers, in the event of a lightning strike). Gauss is the unit of measurement of magnetic induction. Its symbol is G or Gs. In the SI system they convert it to Tesla (T). (1000 Gauss = 0,1 Tesla)

The scientists in the European Organization for Nuclear Research “CERN” (Organisation Européenne pour la Recherche Nucléaire) have extensive experience with the reliability of the Milgauss. In fact, it is said that CERN asked Rolex to produce a timepiece that would be less affected by magnetism, which is how the Milgauss was born. 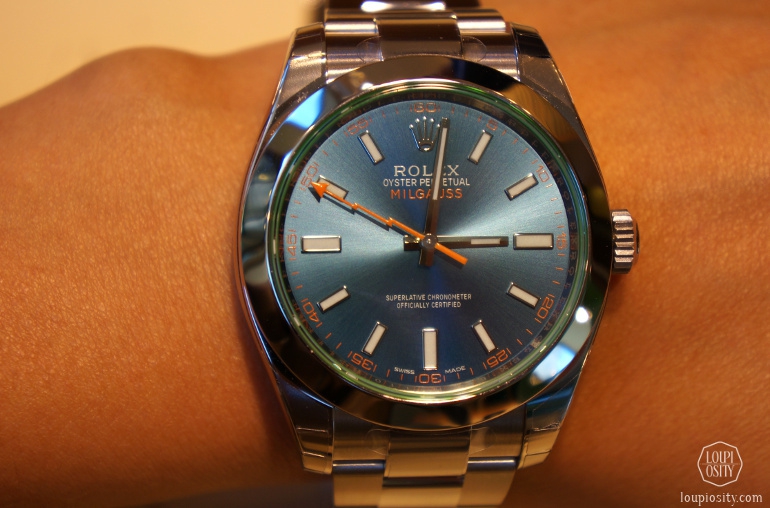 The story and development of the Milgauss is rather uneven, as it was originally made for a niche market it is no wonder that it was Rolex’s least successful model, thus in 1988 they stopped its production. However in 2007 new Milgauss models were issued and Rolex took the chance to add new developments to these models. The watch received the COSC certified 3131 calibre and the oscillator and the escapement are made of innovative paramagnetic materials, such as nickel-phosphorus and niobium-zirconium alloys.

Nowadays Milgauss is the watch of Rolex fans or young people. In 2014 for example a “funky” version was issued, featuring green sapphire glass (the “glace verte” is a type of glass; depending on angle and light conditions, the green edged glass varies from being dark green to a vivid green), Z blue dial, and an orange lightning-bolt-shaped seconds hand. 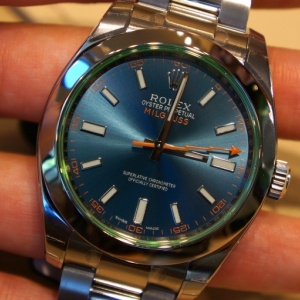 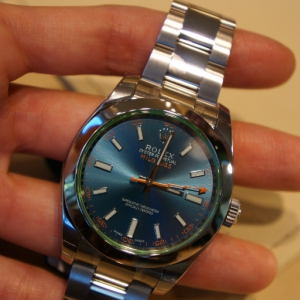 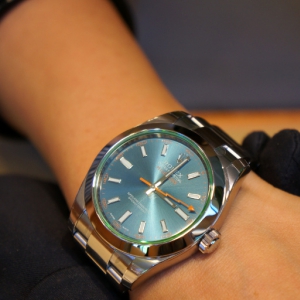 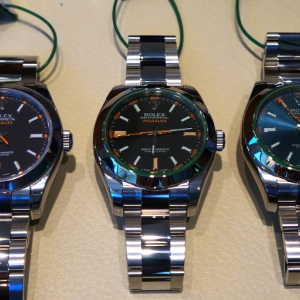 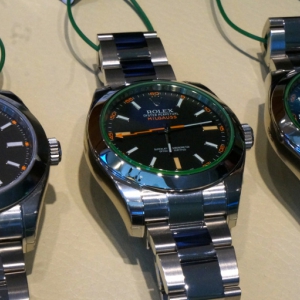 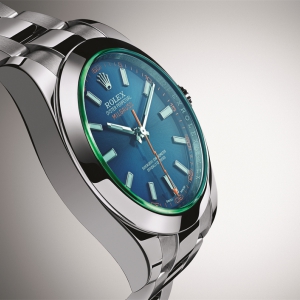 Similarly, the Sea-Dweller has a professional inspiration, as it was made for expert divers. Saturation diving, which was pioneered by George F. Bond in the framework of the Genesis project at the Naval Submarine Medical Research Laboratory in 1957, demanded professional “ultra water resistant” tool watches. These timers had to have greater resistance to depths and corrosion.

The first generation of Rolex’s diver watches was the Submariner, the first editions of which were issued at Basel in 1954. Funnily enough, another Bond, James Bond significantly contributed to the success of Rolex Submariners. This obviously meant that the watch was required to have resistance to Bond’s frenetic lifestyle while ruthlessly demolishing that of his conquests.

This package has made Submariners an attractive choice not only for naval and professional divers, but also those who are more comfortable in ladies’ hearts than in waters. An equally risky mission, of course.

Several models were made of the Submariner, both chronometer and non-chronometer versions. Rolex have constantly pushed the boundaries in terms of certified depth mainly by developing the case further and applying the famous helium escape valve. This invention has been key to ensuring that the Helium penetrating the timepiece gets eliminated at a similar rate as from the human body – normally the gas dissolves from tissues faster than from a sealed watch. By using the valve, pressure gets equalised faster and the crystal does not pop-out during decompression like in the early versions. Rolex has developed the valve with continuous real-life tests performed by Comex, the French industrial deep-sea diving company.

In 1967 Rolex received the patent for the helium escape valve and introduced the Oyster Perpetual Sea-Dweller, an even heavier-duty steel version of the Submariner. These watches have a thicker case and crystal, a date feature, but without cyclops magnifier. The now-familiar Mercedes hand appeared and was first painted with radium for the luminous indices, but later it was changed to tritium-infused paint. (Very detailed article about Rolex Sea-Dweller.)

The Submariners are cult pieces, numerous versions were created including several anniversary editions. In 2012 at Baselworld we encountered the “Maxi Case” with “Chromalight” hour markers, ceramic bezel, blue Parachrom hairspring and bracelet with “Glidelock” extension system. This April in Basel we saw the new edition of the timepiece. We did a face-off for the two versions at the Petite Geneve boutique. Spot the differences! 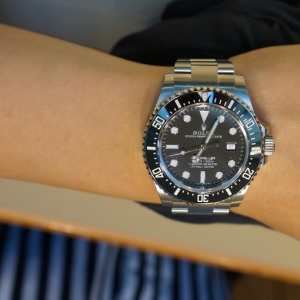 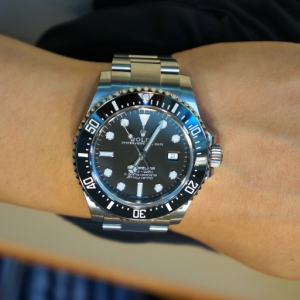 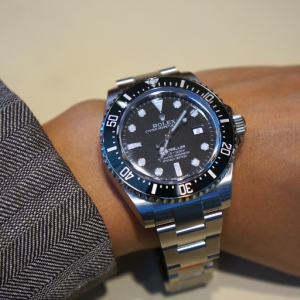 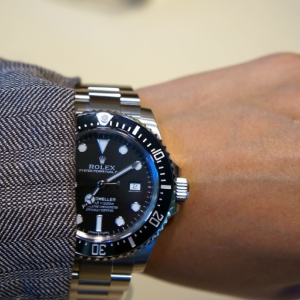 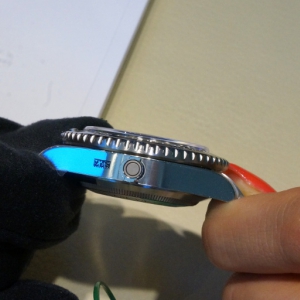 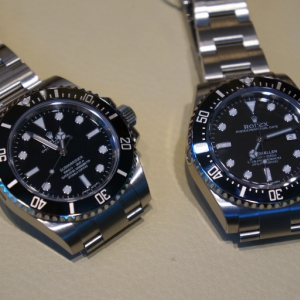 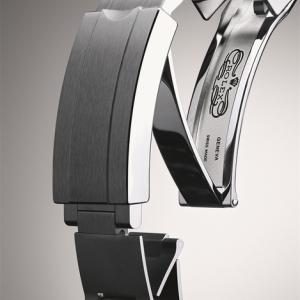 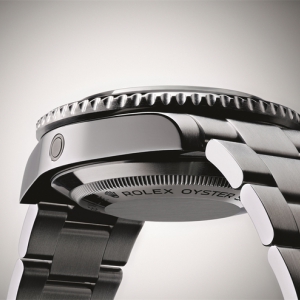