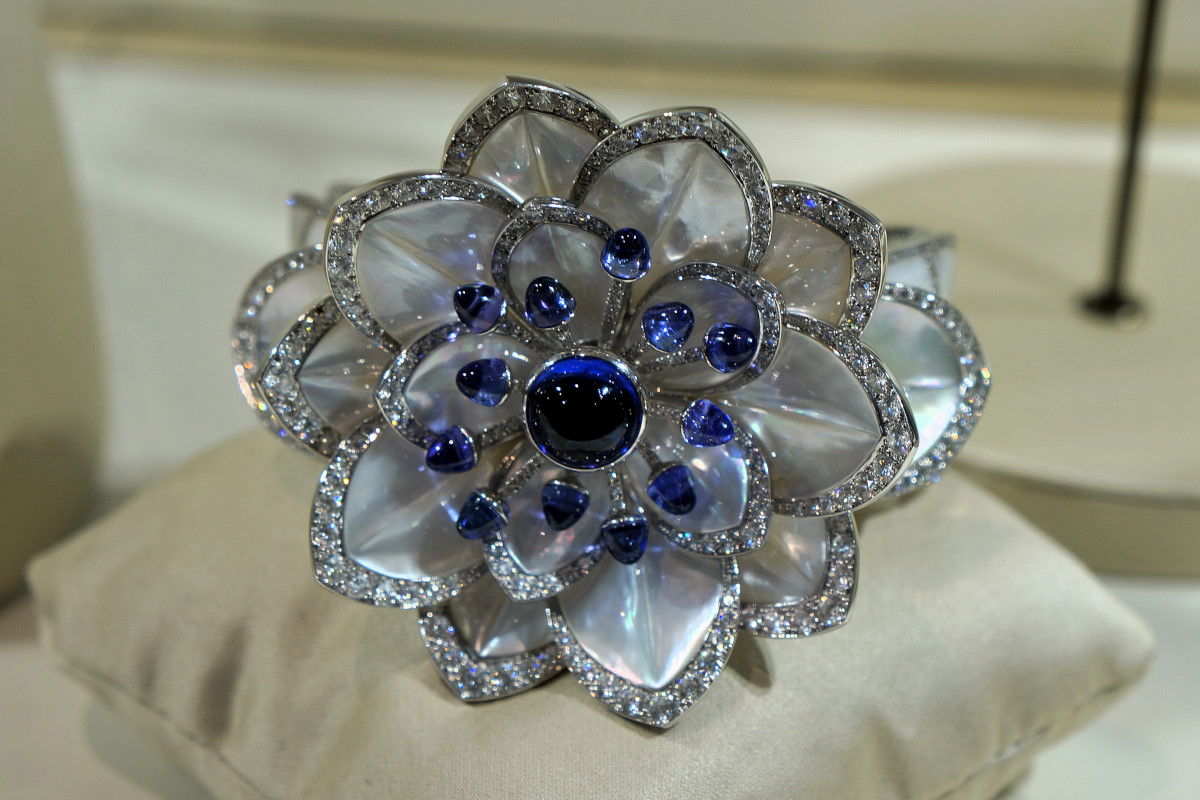 Last year Boucheron’s high jewellery collection celebrated light and their unpaired location at Place Vendôme. (Frédéric Boucheron was the first jeweller to move to the Square in 1893). This year, they captured the famous travels and inspirations of the founder’s son Louis, on the haute joaillerie pieces. They invite fans to five exotic countries…

In 1930, Boucheron was asked to assess the Imperial Treasures of Persia and the Ispahan mosque, the Iranian Great Mosque decorated with blue tiles. He became the official curator of these treasures and his client was Rezā Shāh Pahlavi among others. The focal piece was inspired by the relationship between the Boucheron Maison, the Iranian royal family. The Trésor de Perse necklace consists of diamonds, sapphires, rock crystals and calcedony, in various shapes, cuts and in a masterful combination. The diamonds are laced through the crystal cones, appearing like a set of mirrors against the blue sapphires. The necklace is completed with a ring with a historic cabochon sapphire and earrings. 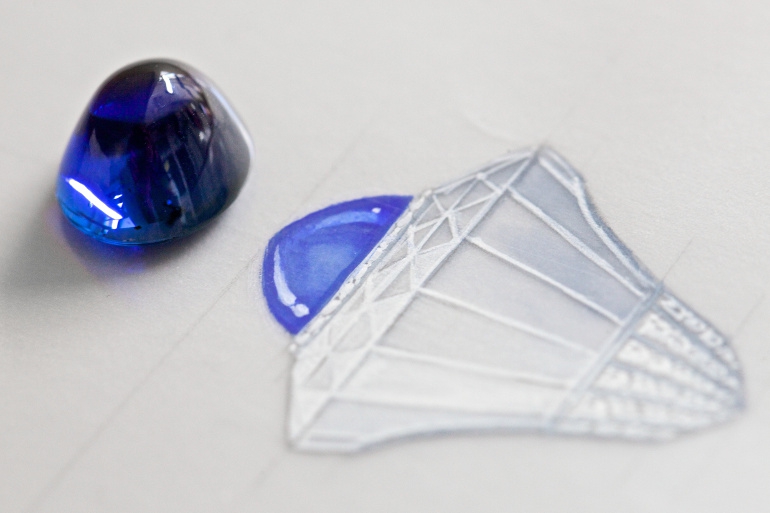 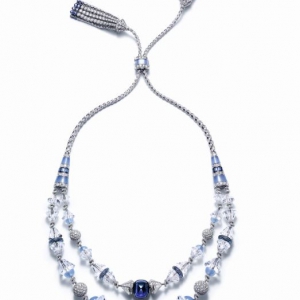 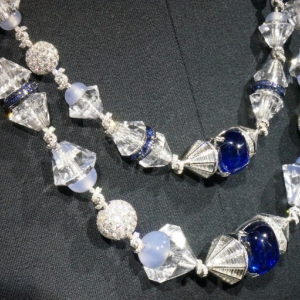 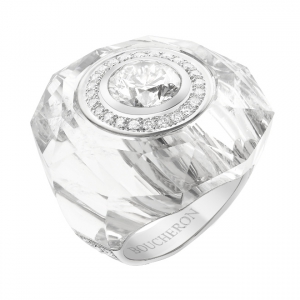 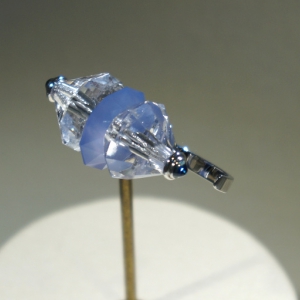 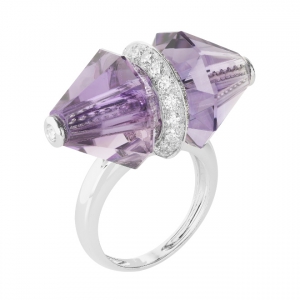 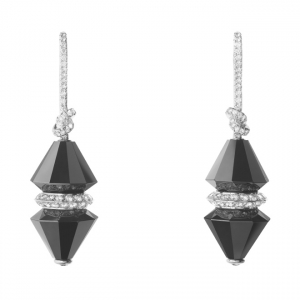 Japanese culture has served as a source of creative inspiration for the Maison for a long time. In 1910 they created a tiara, paying homage to Hokusai’s painting entitled “The great wave of Kanagawa” (from the 36 views of Mount Fuji series).

The motifs of Japanese shadow puppets, etchings and paintings have inspired unique pieces of jewellery that are stunning to both European and Asian eyes. As we could admire the wave and marine life inspired watches at Baselworld, once again we saw beautiful pieces in the Rives du Japon collection where water and waves are expressed through gemstones. The Ricochet necklace also evokes the rings forming on the surface of water when we throw a stone into a lake. The reverse of the necklace is just as stunning as the front.

The Rivage necklace continues the Hokusai theme with a wave of sapphires fringed by a diamond spray. The Master Jeweller who has been employed by the Maison for 35 years used 533 stones in various sizes and colours to shape the waves on this piece.

The Joy set celebrates the freshness of cool water with rock crystal bubbles, sapphires and diamonds inside (the creative concept is similar to the Collier Perles Declat). The ring includes an amazing 21-carat cabochon sapphire. 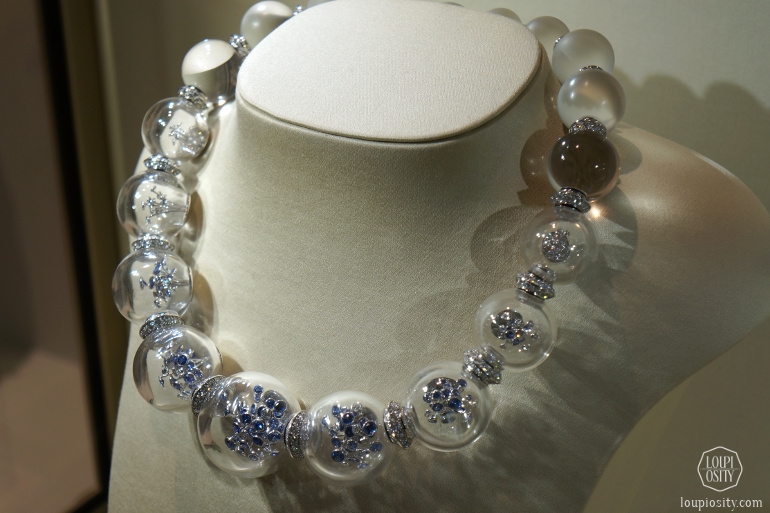 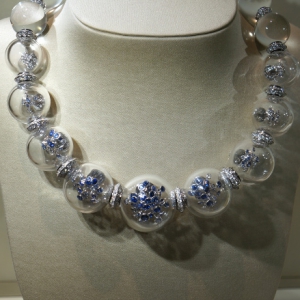 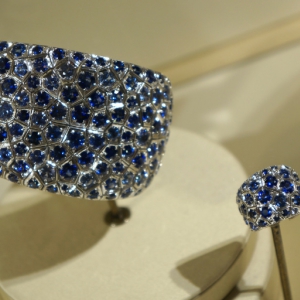 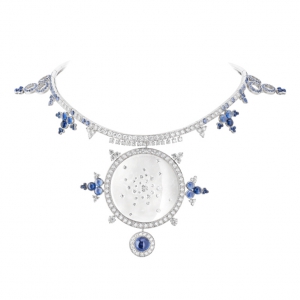 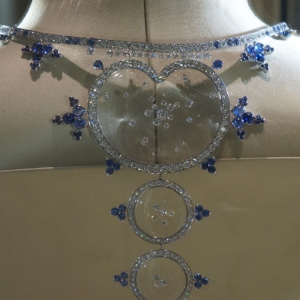 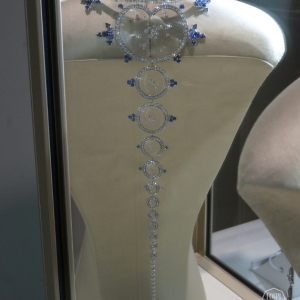 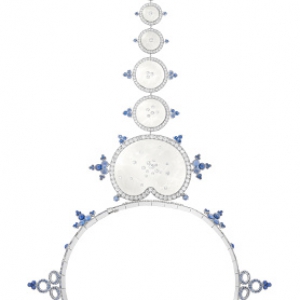 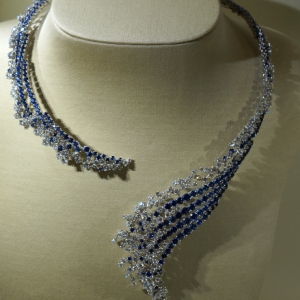 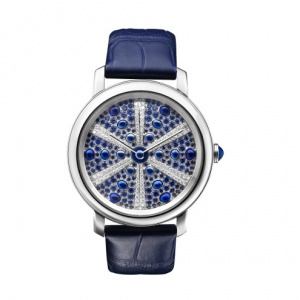 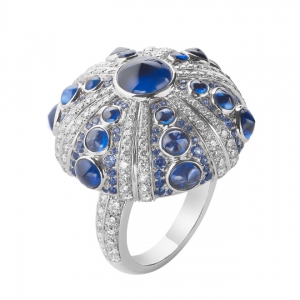 The Splendeurs de Russie is a remarkable creation, a necklace which can be worn as a tiara too. It recalls the cold Russian air and ice via amazingly clear diamonds.

The Point d’Interrogation necklaces are typical to the jewellery house. The Eternity is a simple diamond necklace without a clasp and with a stunning pear shaped diamond as a centrepiece.
Boucheron’s connection with Russia also has a long history and these pieces are devotion to the relationship with the Russian culture: in 1878 Felix Youssoupoff Russian prince bought a diamond corsage in Paris, which was reshaped by Boucheron into a tiara. Czar Alexander III and his wife Maria Feodorovna were famous customers of Boucheron, as the Empress had one of the most valuable jewellery collections of her time, including a magnificent sapphire parure of rare quality and beauty. The enthusiasm of the famous clients led the company to open their first boutique in Moscow in 1897, which was then relocated to St. Petersburg in 1911. 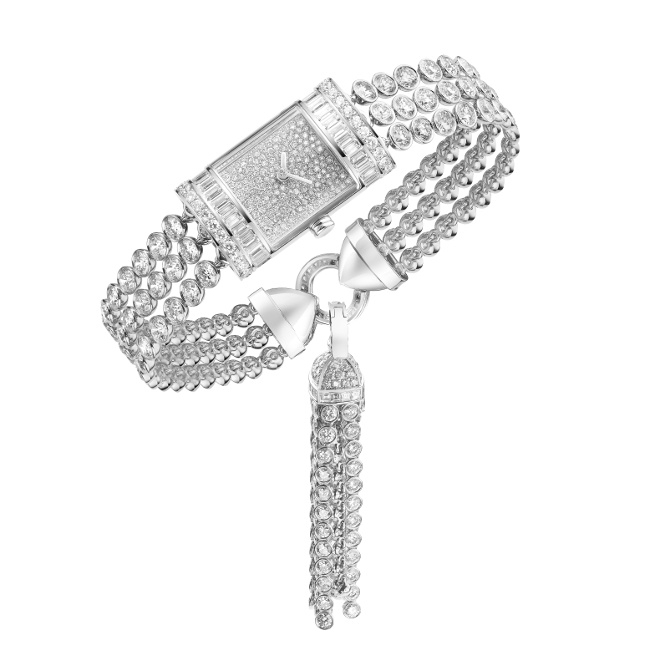 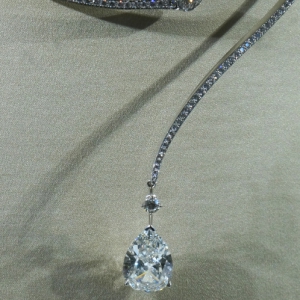 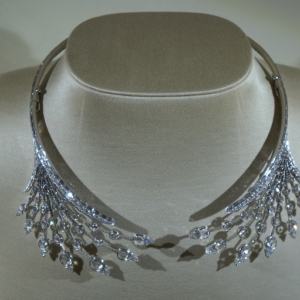 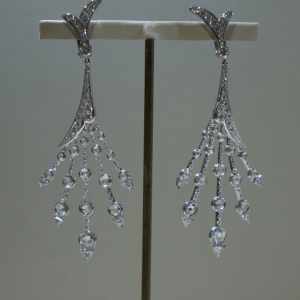 Louis’ passion for travelling led him to India in 1909 where in addition to creative inspiration and looking for special gemstones, he also won over prominent clients, such as Maharajah Sir Bhupinder Singh of Patiala. In 1928 the Maharajah of Patiala commissioned Boucheron to set some stones from his gemstone collection into pieces of jewellery.

In 2004 the Jaïpur High Jewellery collection was launched, with the atmosphere of the Indian capital of the state of Rajasthan. It is known as the Pink City, due to the colour of the stones used for the construction of all the buildings. The prior rulers of Jaïpur patronised artists and artisans from all over the world.

This year the main motif is the water lily as a symbol of purity and vitality. The very delicate Nymphéa has mother-of-pearl greyish petals with cabochon sapphires in the middle and on the pistils.

The Fleur des Indes necklace’s centrepiece is admirable, a 188.79-carat Moghul emerald, and it is engraved with a lotus flower motif. 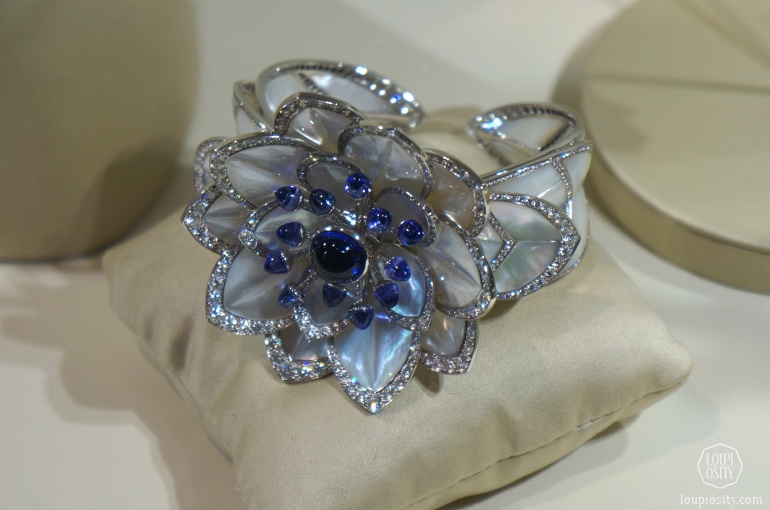 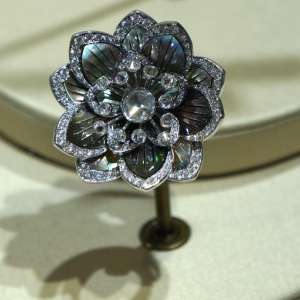 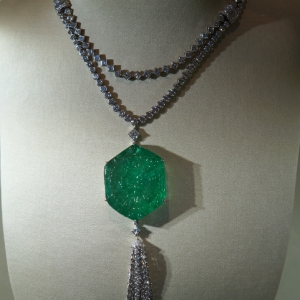 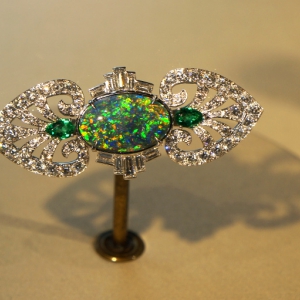 The calligraphy tradition of East Asia originated from China and it has also led to the development of other arts in the country such as seal carving and ink-stones. Calligraphy reflects the importance of words and wisdom. Each written Chinese word is represented by a symbol.

The shapes of Chinese calligraphy appear in the Pinceau de Chine series and dedicated to conserve the clean lines of this art. The Calligraphique set is simple yet beautiful. The necklace has a geometric design with pear-cut rock crystals and diamonds. are platinum set with cushion diamonds and taper diamonds. 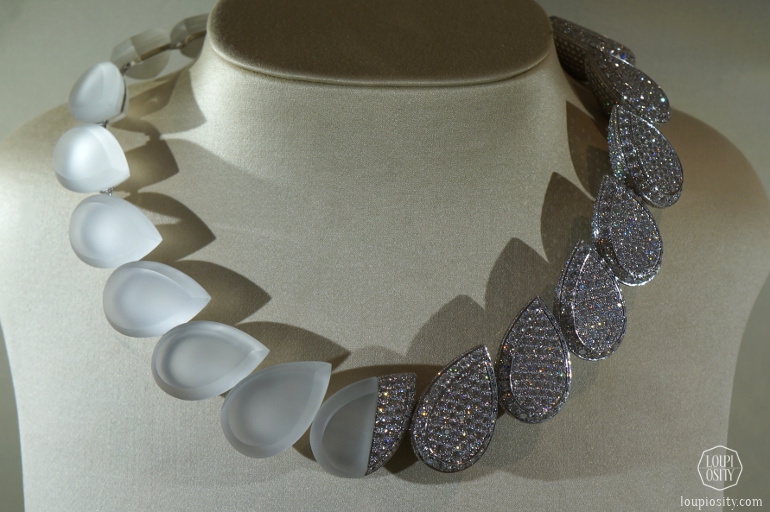 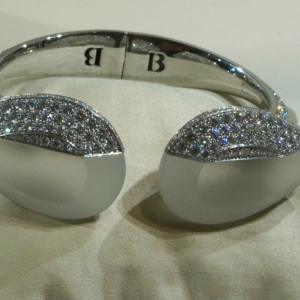 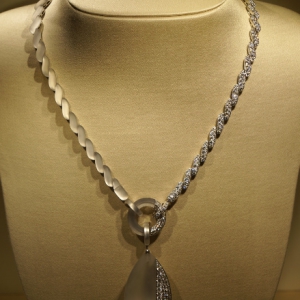 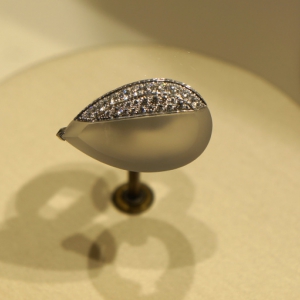 Claire Choisne, the Creative Director of Boucheron showed us once again the rich heritage, savoir faire and joyful harmony between tradition and modernity at Boucheron.

Photo credits: Boucheron, Loupiosity.com.
All registered trademarks are property of their respective owners.
All rights reserved.

Engraved Gems at L’École, School of Jewelry Arts This June we are finally back to Paris - first of all to participate in the Révélations 2022 but of course there is always so much to discover there. Among other exciting events, we visited the Engraved Gems exhibition at L’École, School of Jewelry Arts just around the corner from Place Vendôme.Hemmerle at Design Miami/ Basel One of the most unconventional and most recognisable high-jewellery houses, Hemmerle exhibited for the first time at Design Miami/ Basel. Finally we got to see art, jewellery and design pieces in real life in Basel - so naturally, the booth of the Munich-based brand was the top on the list to visit.Gold and Treasures, 3000 years of Chinese ornaments - the… L’École, School of Jewelry Arts presents a new exhibition in Paris, showcasing over three thousand years of goldsmithing work in China, through a selection of masterpieces from the Mengdiexuan Collection.