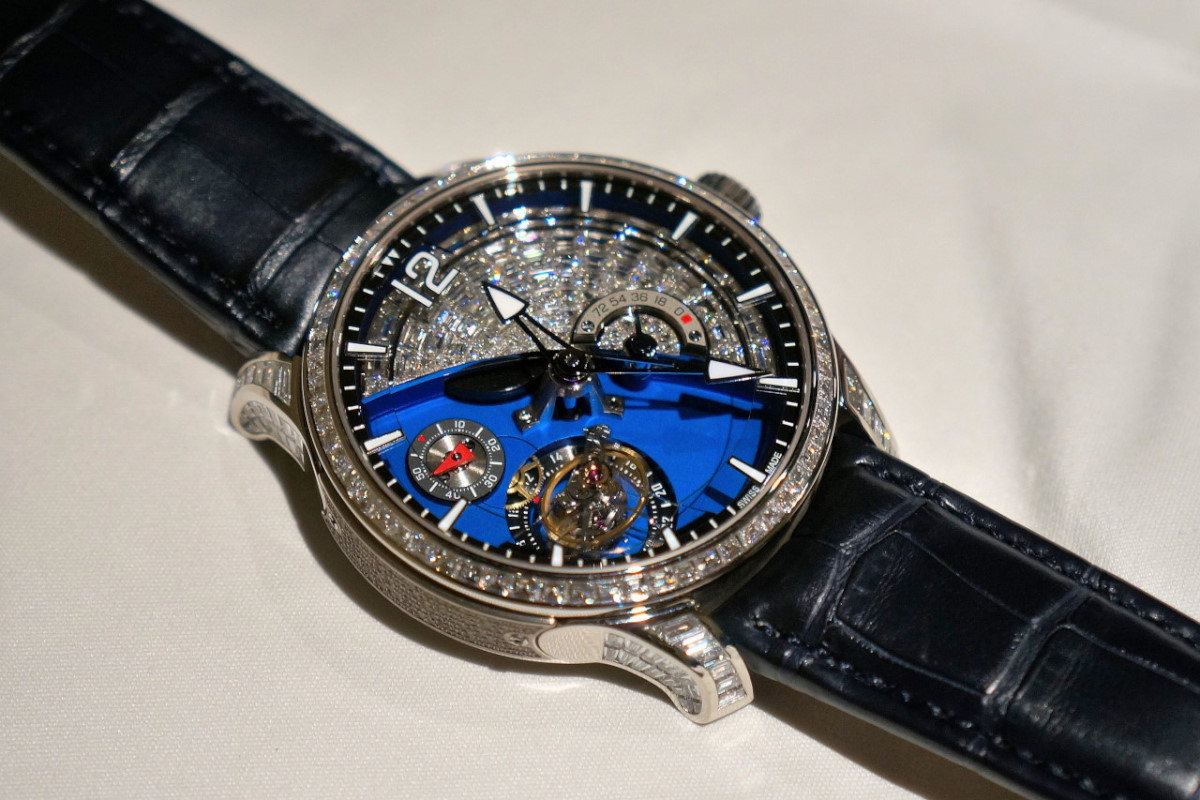 One of the most awaited meetings at SIHH 2014 for me was with Greubel Forsey. The young brand founded by Robert Greubel and Stephen Forsey was launched at Baselworld in 2004 with the announcement of their Double Tourbillon 30° – an invention they had been working on together for 5 years. Ever since, the two gentlemen with their talented team have been the source of unconventional horological solutions that remove you away from the orthodox world.

This year Greubel Forsey introduced four novelties and also introduced the fascinating Art Piece 1 they developed in collaboration with Willard Wigan to the scene.

The GF01 Contemporain in general has an exciting look. The watch face has two levels, an upper and a lower deck, and therefore it looks like one half was bitten out from the dial. Where the upper plate is “missing”, a 24 seconds tourbillon and a small seconds circle become visible. The hour hands sweep the higher plate and swim in the space above the lower plate. The power reserve indicator lays exactly at the edge of the two levels moving the hand on the upper plate.

The two-level design calls for play. To mark the 10th anniversary of Greubel Forsey, the artisans dressed the white gold upper deck as well as the bezel in diamonds. They used top-grade diamonds – internally flawless and D/E colour for all the baguette-cut gemstones.

In 1953 the diamond business introduced a new diamond grading system, which includes the description and classification of the diamonds, including clarity. In the early 70s another grade was added, as diamond graders realized that many diamonds were being aggressively cut and creating some surface blemishes. With any blemishes, the diamond cannot be graded as Flawless. The Internally Flawless category (IF) diamonds have no inclusions visible under 10x magnification (examined by a skilled grader), only small blemishes on the diamond surface. These diamonds are still extremely rare and valuable.

It is a similar case with the colour. A chemically pure and structurally perfect diamond has no colour. But in reality almost no gem-sized natural diamonds are absolutely perfect. By grading white diamonds we use a scale from D to K. The D colour is called colourless or exceptional white and the K is a faint yellow or tinted white. The D and E colours are really uncommon.

The titanium lower plate received a frosted royal blue coating, which together with the diamond-white top reminds me of ice broken down in water. The triangle of the seconds hand, the tip of the small hand on the tourbillon and the dot representing the low-power range on the reserve de marche indicator is red. Beneath the titanium bridge of the tourbillon the balance wheel is made of gold and with the rest of the regulator it is inclined at 25° completing one revolution every 24 seconds. The timepiece is made to order. 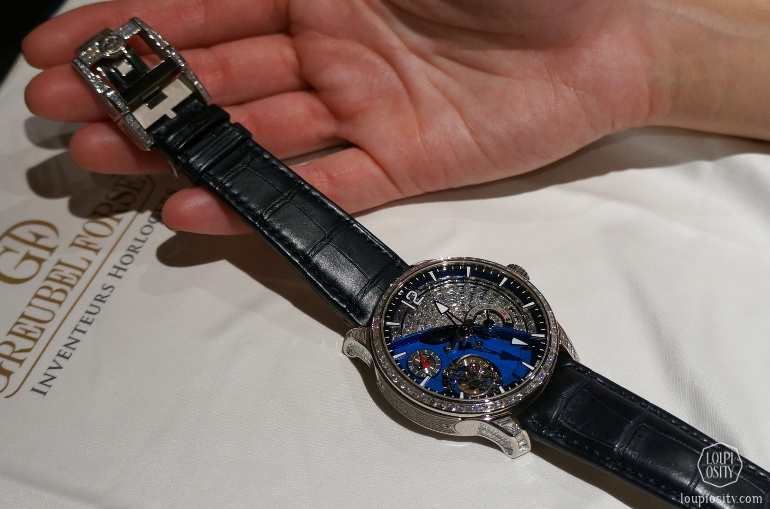 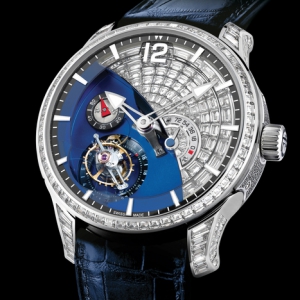 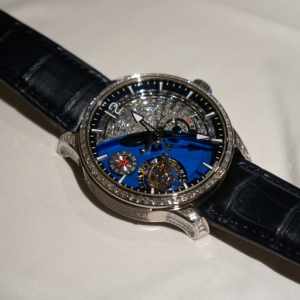 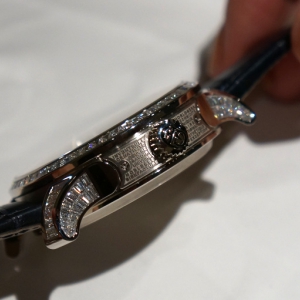 Talking about a versatile watch, the same model will enrich the 50th anniversary collection of Les Ambassadeurs presented 13th February in Zurich, having the upper plate completely engraved with little logos of the well-known boutique. 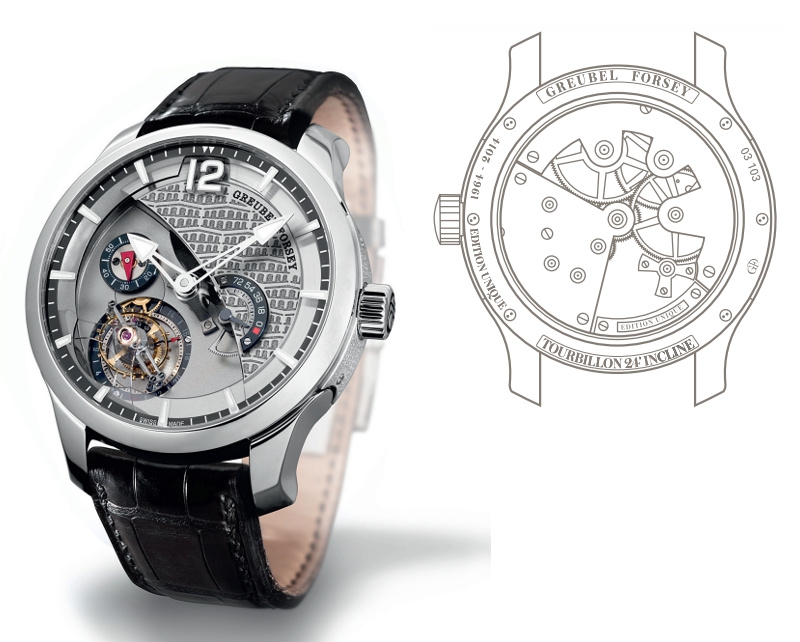 As I mentioned, the Double Tourbillon 30° was the first in the line of inventions, which celebrating a decade of continuous operations have been fitted into a limited edition timepiece. This watch encapsulates what GF professes about fine watchmaking – the two black ADLC plates enclosing the rest of the structure proclaim the brand’s fundamental values and beliefs. The love of precision timekeeping on the blurred border of engineering and arts has also brought this model alive.

It is called Bi-colour, not because of the fact that the case may be ordered in platinum and in 5N pink gold, but because these metals are accompanied by frosted nickel-silver bridges with a black chrome finish. The contrast in colours visible at all depths of the watch is really cool. May you glimpse the Double Tourbillon Technique 30° Bi-colour from any side; you’ll get an immediate dive right into the finest details of the movement. The massive quadruple barrels at 11 o’clock make sure that your time is deadly accurate from a complete winding for the next 120 hours. It is connected to the spherical differential situated at 1:30, which is linked to the power reserve indicator at 3. Its red arrow, as well as the seconds hand made of the same colour further enhance the masculine look. The main attraction is of course the Double Tourbillon 30° at 6 o’clock, which can be observed from basically any angle. The two cages make a complete turn in 1 and 4 minutes, the first inclined at 30°, while the second is horizontal. 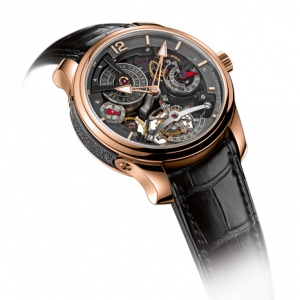 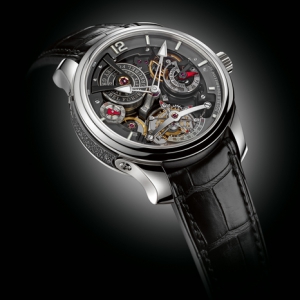 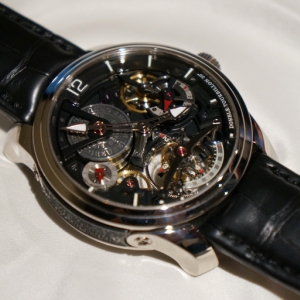 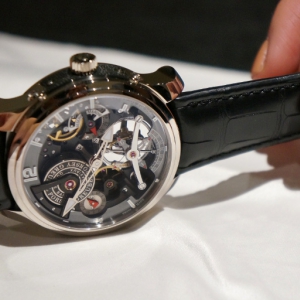 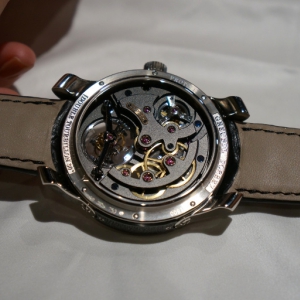 Have you already had a chance to see the Greubel Forsey GMT? Well if not, make sure you do! The model came out in 2011, jumping right to the top of the most exciting dual time zone watches. At SIHH 2014 the manufacture came out with the 950 platinum version.

To many people the asymmetric case takes some time to get used to, but I believe after the first surprise everything seems to be just in the perfect spot. Instead of purely displaying a second time zone on the dial, Greubel Forsey chose to add a little flick to it and placed the Earth at 8 o’clock. The globe turns anti-clockwise just like it spins in reality. Facing the North Pole you can get an instant view of the global time zones and what phases of the day the different territories are in. On the side the platinum case opens a sapphire window to the Southern Hemisphere. Naturally, there’s a second time zone indicator, situated at 10 o’clock. The back of the watch hides a rotating disc showing the universal time for 24 time zones. The touch point with the golden sun marks where midday is. The 24-second tourbillon inclined at 25° (another invention of Greubel Forsey) operates in the GMT. The bridges in the GMT Platinum are also black chrome treated nickel-silver. 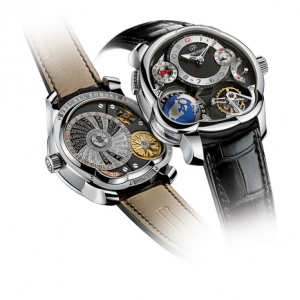 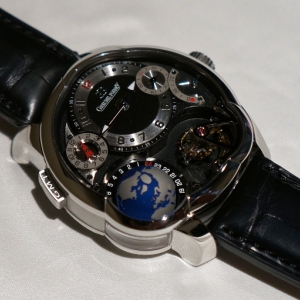 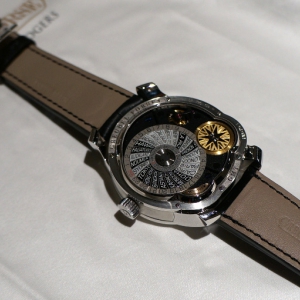 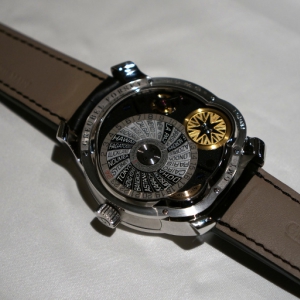 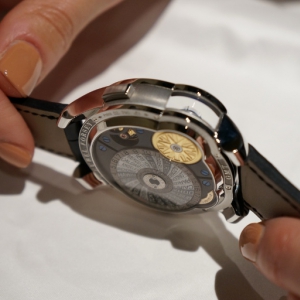 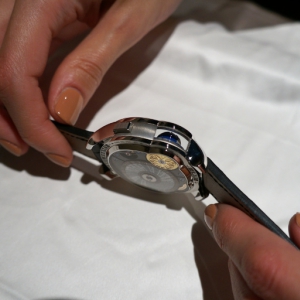 Probably the highlight of this years’ presentation was examining the prototype of QP à ÉQUATION. The model combines a perpetual calendar, one of the most complicated functions with an elegant simplicity. The display of the calendar occupies one quarter of the dial and is emphasized by its nickel-silver rounded border as well as its elevated height. It consists of three apertures aligned next to each other horizontally, allowing an immediate and natural reading of the date: day of the week, date and month and a small leap year indicator at 6 o’clock. Simplicity is evident in setting the date too, as you can easily modify the date forward or backward by turning the crown clockwise or anticlockwise.

On the case-back you can see an Equation of Time indication, connected to the perpetual calendar of course.

Since the orbit of the Earth is an ellipse, which is not centred on the Sun, and its speed also varies on this journey, the fictitious “mean” time we measure differs from the solar time which tracks the exact motion of the Sun. Sometimes the Sun, and therefore the solar time is ahead, and sometimes it’s behind the mean time – the difference can be as much as 16 minutes and 33 seconds. Equation of time describes the discrepancy between these times.

Greubel Forsey installed two superimposed synthetic sapphire disks on the back of the piece. The one driven by the date wheel has the scale of the time discrepancy, the second making one revolution a year holds a curve with four sectors. When the red sectors (2) intersect the scale, the solar time is ahead to the mean time by the value shown on the scale, when the blue (2) intersect, it is running behind. 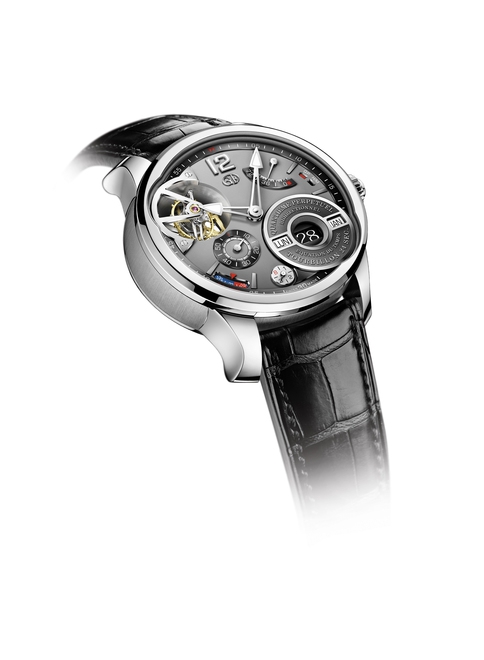 In the world of Lilliput wheels and pinions have become giants as Greubel Forsey teamed up with nano-sculptor Willard Wigan to create and install a miniature figurine in a special artistic piece. As Robert Greubel and Stephen Forsey noted, it was a 5 year road together with Wigan to “create a symbiosis of our respective creative universes”. The final result is fantastic! The sculpture situated inside the structure can be admired though an optical system that magnifies it 20 times. 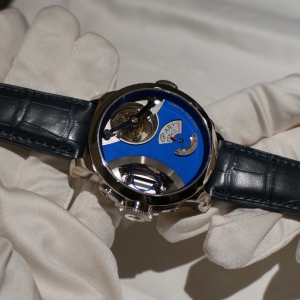 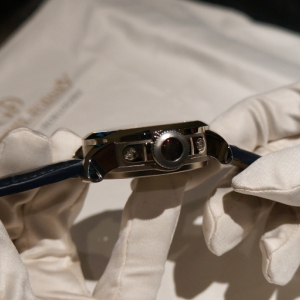 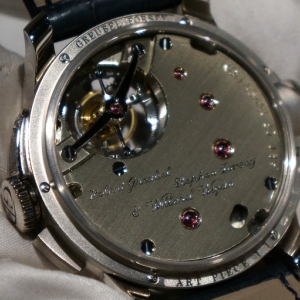