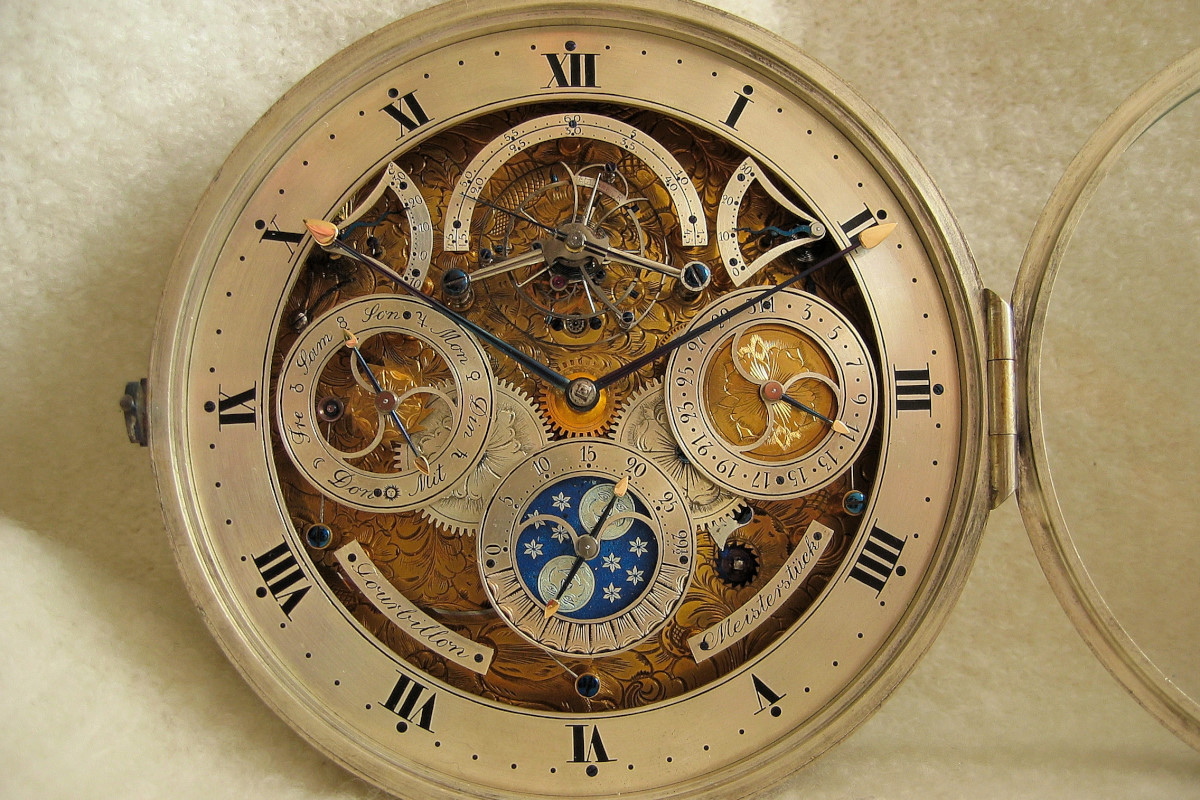 Aaron Becsei is an independent watchmaker, and member of Académie Horlogére des Créaturs Indépendants. He guides me with the experts’ knowledge through the secrets of fine watchmaking. In the series of Uncomplicate Complications we discover the seeds of uniqueness, art and value in a timepiece.

There’s an indicator in our car showing when the petrol’s about to run out and it’s time for us to head to the petrol station. The power reserve indicator has a similar function in mechanical watches, showing the amount of power still reserved.

The mainspring, which is a coil of metal inside a cylinder, called the barrel, is the energy storage in the watch. In manual watches it is wound by hand via the crown or by the rotor (eccentric weight) in the automatic pieces. The barrel has gear teeth around its circumference and when wound it drives the gear train. How long the watch keeps ticking once fully wound, called running reserve or “reserve de marche” in French, is determined by the characteristics of the mainspring as well as the efficiency of the entire movement.

There is an interesting dispute as to who made the first self-winding watch: Louis-Abraham Perrelet or Hubert Sarton. What is certain is that such mechanisms first appeared in the second half of the 1770s. Automatic winding mechanisms were first added to wristwatches as they became popular after World War I. In 1924 John Harwood registered his patent for an automatic wristwatch he created a year earlier. The launch of the Eterna-Matic in 1948 was a milestone because here the rotor that turns 360-degrees was fixed with a ball-bearing mounted rotor system.

During the history of watchmaking various mechanisms were used quite early on to measure and indicate the power reserve. This was particularly significant in sea chronometers, as they determined the longitudinal position of the ships using chronometers by calculating the difference between the reference time it measured (Greenwich Mean Time) and the noon experienced in the given position. For this reason it was paramount for the chronometer to run without interruption, and for this to be possible, the power reserve had to be monitored and the energy replaced.

In automatic-winding watches, the movement of the wearer drives the winding mechanism thus here the power reserve indicator does not play a major role – as long as the watch is worn, it remains wound up.

However the power reserve indicator serves well in manually-wound watches by showing the time left until the next winding. For appropriate punctuality the mainspring must always be stretched to some extent, the indicator must always be at least 30% of the running reserve. Breguet first added such a function to a wristwatch prototype in, but it was Jaeger-LeCoultre who first started to use it in serial production at the end of the 40s in the Powermatic Calibre 481 automatic watch. 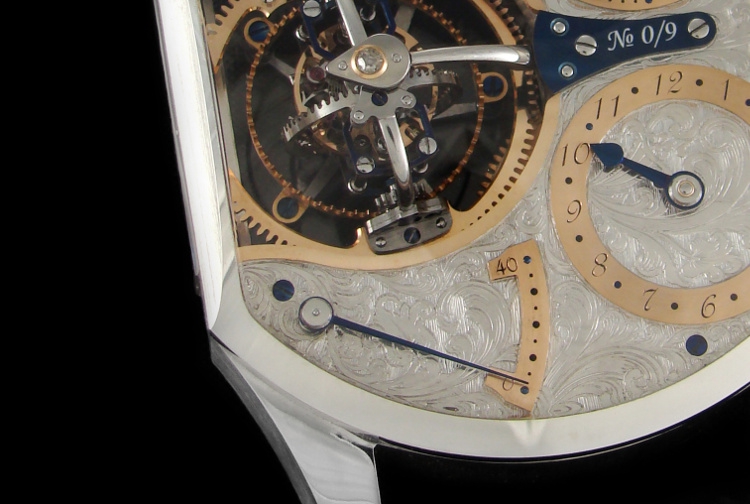 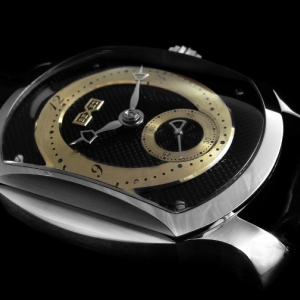 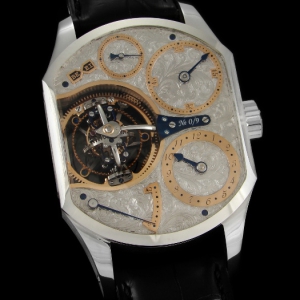 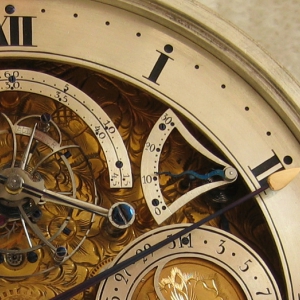 There are several solutions for measuring the power reserve. Basically when being wound, a train of gears connected to the ratchet wheel or to the barrel arbour, drives the power reserve indicator. By having the other side of this differential train also connected to the teeth of the barrel, the indicator moves in the opposite direction as mainspring energy is consumed. Aaron uses this solution in his latest modell, the Dignitas. 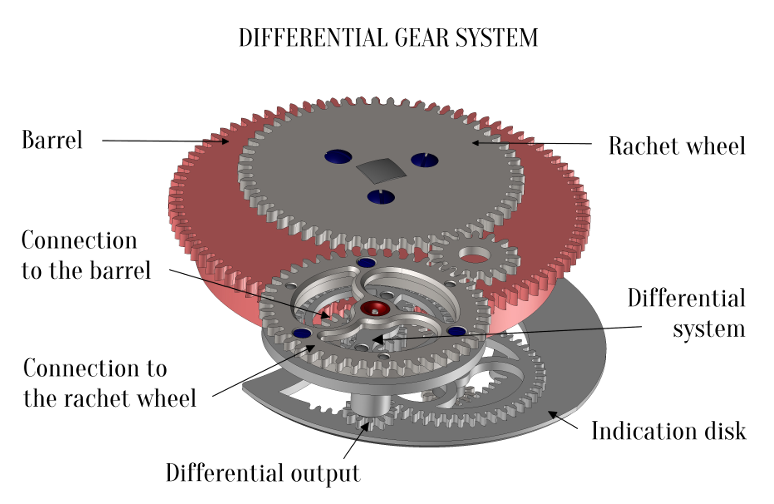 In his earlier pieces, like the Primus, a differential screw system operates, which includes a cone on a threaded shaft that is connected to the ratchet and the barrel. The cone is touched by a follower arm. When wound, the cone ascends, while during unwinding the cone descends. As the follower arm slides over the cone’s changing diameter surface the indicator hand linked to it moves one way or the other. 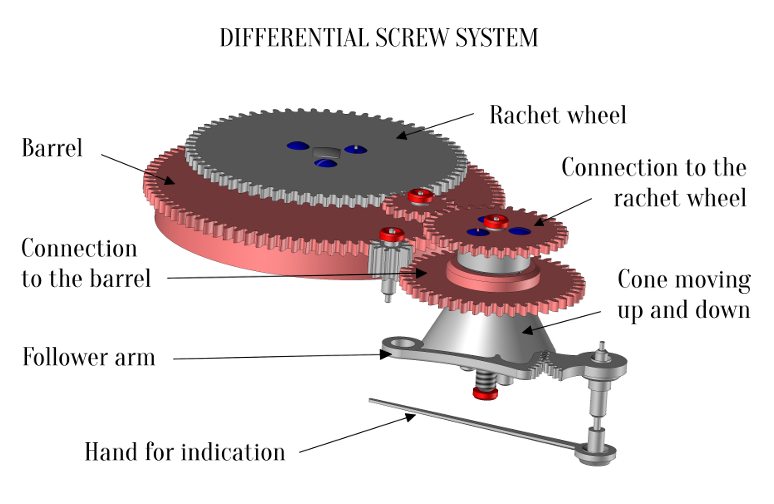 The articles of the series:

Photo credits: Bexei.
All registered trademarks are property of their respective owners.
All rights reserved.

MB&F Legacy Machine Perpetual Palladium We previewed the MB&F Legacy Machine Perpetual Palladium at the Geneva Watch Days 2021 - discover it with us.Geneva Watch Week A great amount of finewatchmaking brands will present their latest novelties to press, retailers and to the public in Geneva From 30 March until 5 April with the hybrid concept - online launches will be dedicated for those who are not able to travel to Switzerland this spring.Time to reconnect - H.Moser & Cie Swiss Alp Watch Final… Marking the end of an exciting and also divisive chapter of fine mechanical watchmaking, H. Moser & Cie. just released the Swiss Alp Watch Final Upgrade.