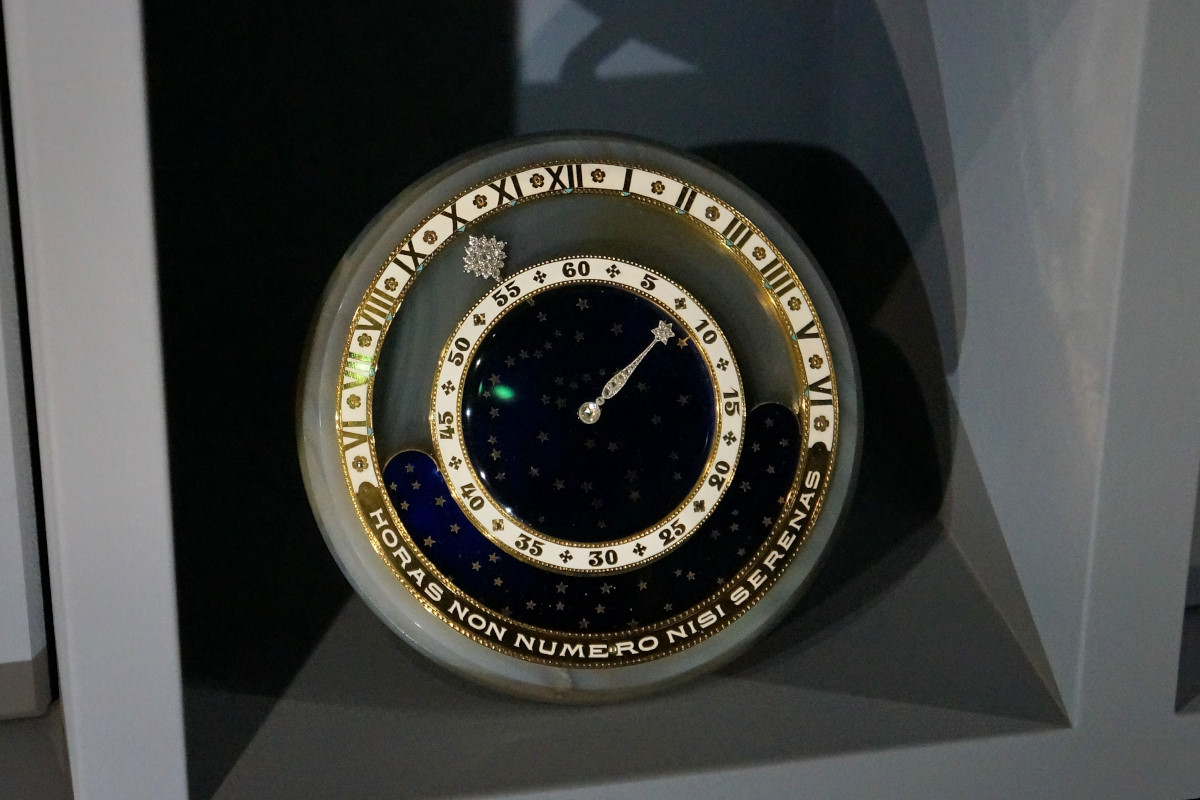 Cartier: Le Style at L’historie exhibition in Grand Palais, Paris. My previous article covers pieces until the late 1930s from the rich history and archives of Cartier.

I don’t really like illusions; I prefer standing with two feet on the ground facing reality. There are only a few exceptions to this, one of which is the mystery clock. In fact, fine-watchmaking in general is a kind of white magic to me by giving the illusion of happiness when looking at the time passing by and sounding charming bells of minute repeaters – not that any minute could be repeated. The passing of time is something ladies are rarely comfortable with, yet staring at the ticking of sophisticated timepieces quietly brings joy.

I find mystery clocks honestly fascinating. The first time I saw such a clock in real life was at Siegelson earlier this year at Baselworld, when I was shown one of the first single-axle mystery clocks that Cartier created in 1920. This timepiece, I tell you, does have magical aura.

A section of the Cartier exhibition at Grand Palais is dedicated to mystery clocks the Maison is well famous for. This is the first time to have such an extensive collection of these beauties showcased together.

Mystery clocks do not offer an obvious clue to how the hands on the dial are driven by the movement. Of course, there’s no magic involved, only engineering genius. Actually, the fundamental idea is pretty simple: the hands are fixed onto crystal disks, which on their circumferences are toothed and driven by wheels. All are well hidden by the frame, just as how the power is transferred from the main spring all the way to the crystal via at times transparent or impossibly narrow routes. Two masterminds behind such mechanics were Jean Eugène Robert-Houdin and Maurice Coüet.

It was the French clockmaker and illusionist, Jean Eugène Robert-Houdin, who in the 1830s first created mystery clocks. Born as Jean Eugène Robert, he was the descendant of Prosper Robert, a respected watchmaker of the village Blois in France. He took on the name of his wife and became Jean Eugène Robert-Houdin in 1830. As per the legend, during his apprenticeship as a watchmaker with his cousin Jean Martin Robert, the young Jean Eugène went to buy the book of Ferdinand Berthoud titled Traité de l’horlogerie (Treatise on Clockmaking). However, by accident the bookseller wrapped him the Dictionaire Encyclopedique des Amusuments des Sciences, Mathematiques et Physiques (Dictionary Encyclopedia of Amusements of Science, and Physical Mathematics), a writing about magic and illusions. Instead of returning the book, he studied it and became the pioneer of modern illusionism. His magical spirit and the engineering talent he inherited from his father resulted in a series of mystery clocks, which in 1839 won a bronze medal for him at the Exhibition of French Industry.

Robert-Houdin’s footsteps were followed by others, such as Maurice Coüet. He lived and worked in an era that revolutionized forms, function and technology. Art Nouveau, Secessionism and later the Art Deco made their marks on all areas of life, and were just the perfect movements to develop mystery clocks even further. Coüet, whose father and grandfather both worked for Breguet, studied with his farther in his small workshop in Evreux. Later he moved to Paris and set up his own business that supplied table clocks exclusively to Cartier. His inventive mind came up with interesting designs, such as the “planet” and “comet” clocks in 1919 that gave the illusions of the night skies or the fan-style “Carp” clock with a retrograde hour hand in 1925. 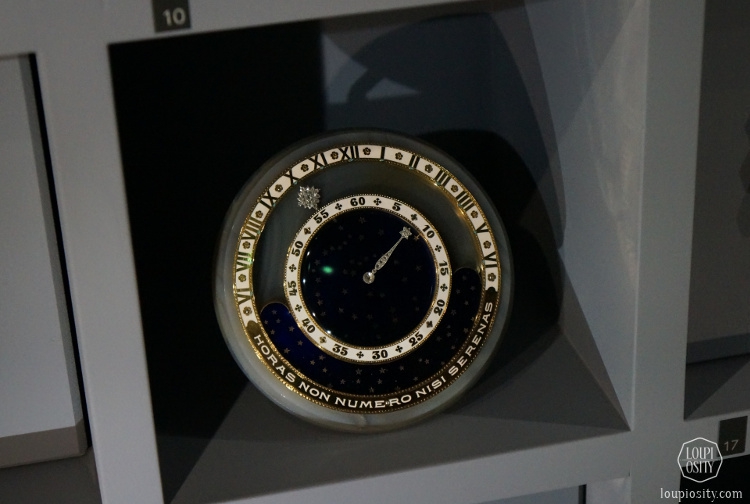 In 1912 he produced his first mystery clock, the Model A, resulting in an immediate contract with Cartier for exclusive supplies of such marvelous artistic mechanics. Coüet’s workshop produced astonishing pieces in the next two decades, representing the peaks of craftsmanship, material usage and engineering. His colleagues included Charles Jacqueau and Georges Remy accountable for mystery clock designs, his brother René, Alfred Loquet or the designer Alexander Diringer.

A series of 6 Shinto “shrine gate” (“portique”) mystery clocks were created between 1923 and 1925, all of them in different shapes. The first in the row was the Large “Portique” mystery clock, which has the movement under the removable Billiken figure and the transmission axle to the dial is found in the rock-crystal crossbar behind a coral cabochon. When in 1973 Cartier decided to establish the Cartier Collection, the first piece he acquired was this. 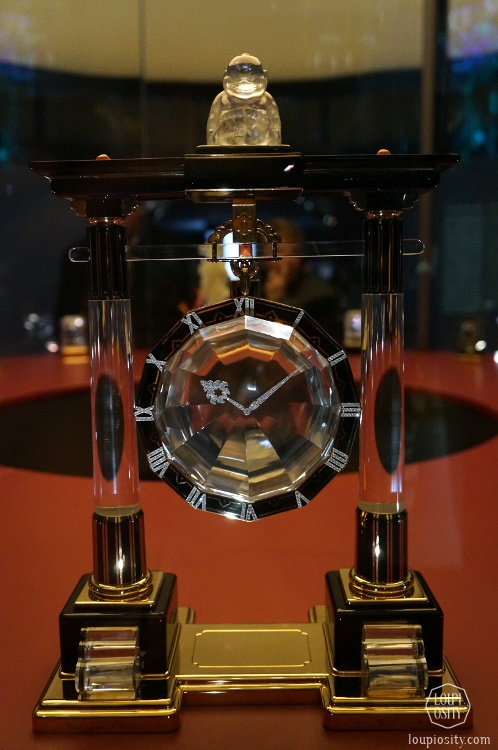 Cartier was famous for incorporating antiques into his clocks. Between 1922 and 1931 the Maison produced a series of 12 table clocks featuring animals and other figurines – today 4 out of the 12 are in the Cartier Collection.

The “Elephant” (1928) was built around a Chinese jade statue from the 18th century. The rectangular 8-day movement sits in a gilded metallic case attached to the base of the pagoda. Adjustment and winding happens by lifting the pagoda to reach the movement. 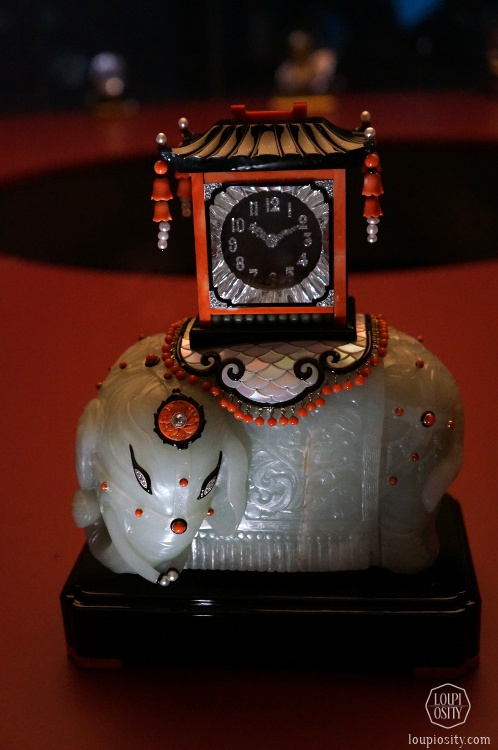 A 19th century Chinese agate figurine is central in the “Chimera” (1926) clock. The mechanism is in the base and the transmission axle runs in the coral underneath the chimera.

The antiques made of jade used for the “Deity” mystery clock (1931) are also from 19th century China. This was the last piece in the series. The movement is in the base, and it also incorporates a striking mechanism for the hours and quarter-hours. 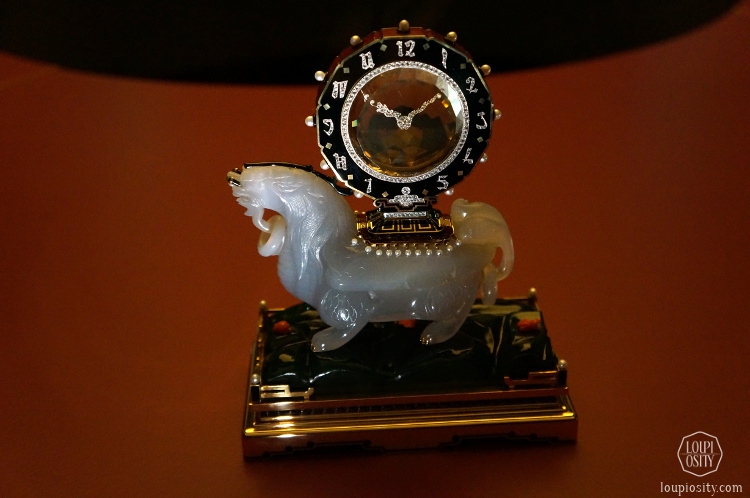 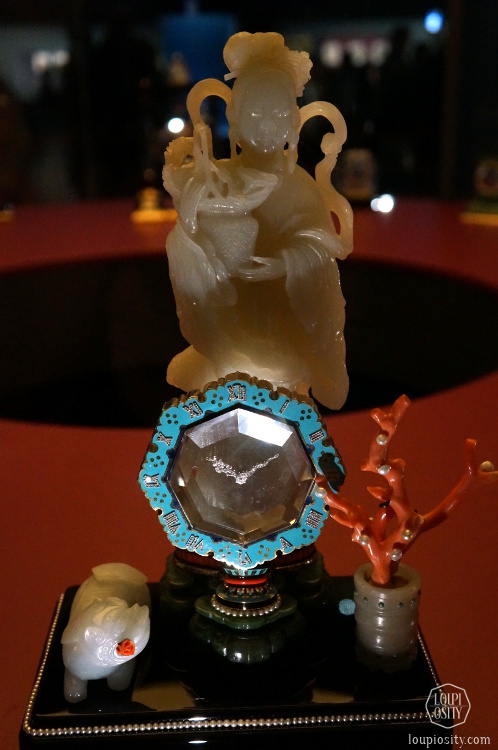 A member of the series, but not a true mystery clock is the “Carp” (1925) with an 18th century fish made of jade in the center. The hour hand, travelling on a rock crystal dial with numbers from 6 to 6, is a jumping back retrograde hand. 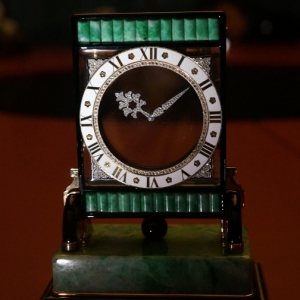 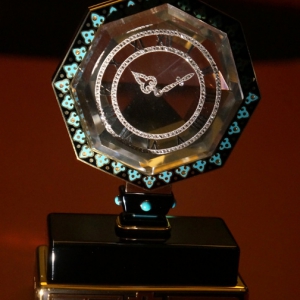 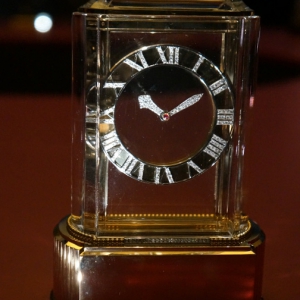 Révélations Paris 2022 After many recommendations, we will visit Révélations in Paris for the first time this June. The biannual event is a prestigious showcase for the finest contemporary creations from France and abroad. Follow along with us!Cartier 'Rare Watches' exhibition in Geneva Cartier Geneva had a special treat for watch lovers last weekend - the Rare Watches Exhibition included more than 30 exciting timepieces at the La Résidence space in the Rue du Rhône boutique. The showcase was open to the public for just two days. We were lucky enough to browse around some amazing Cartier icons. Panthère de Cartier collection This September Cartier presents new jewels in the Panthère de Cartier collection - necklaces, bracelets and rings in highly articulated sculptural creations.