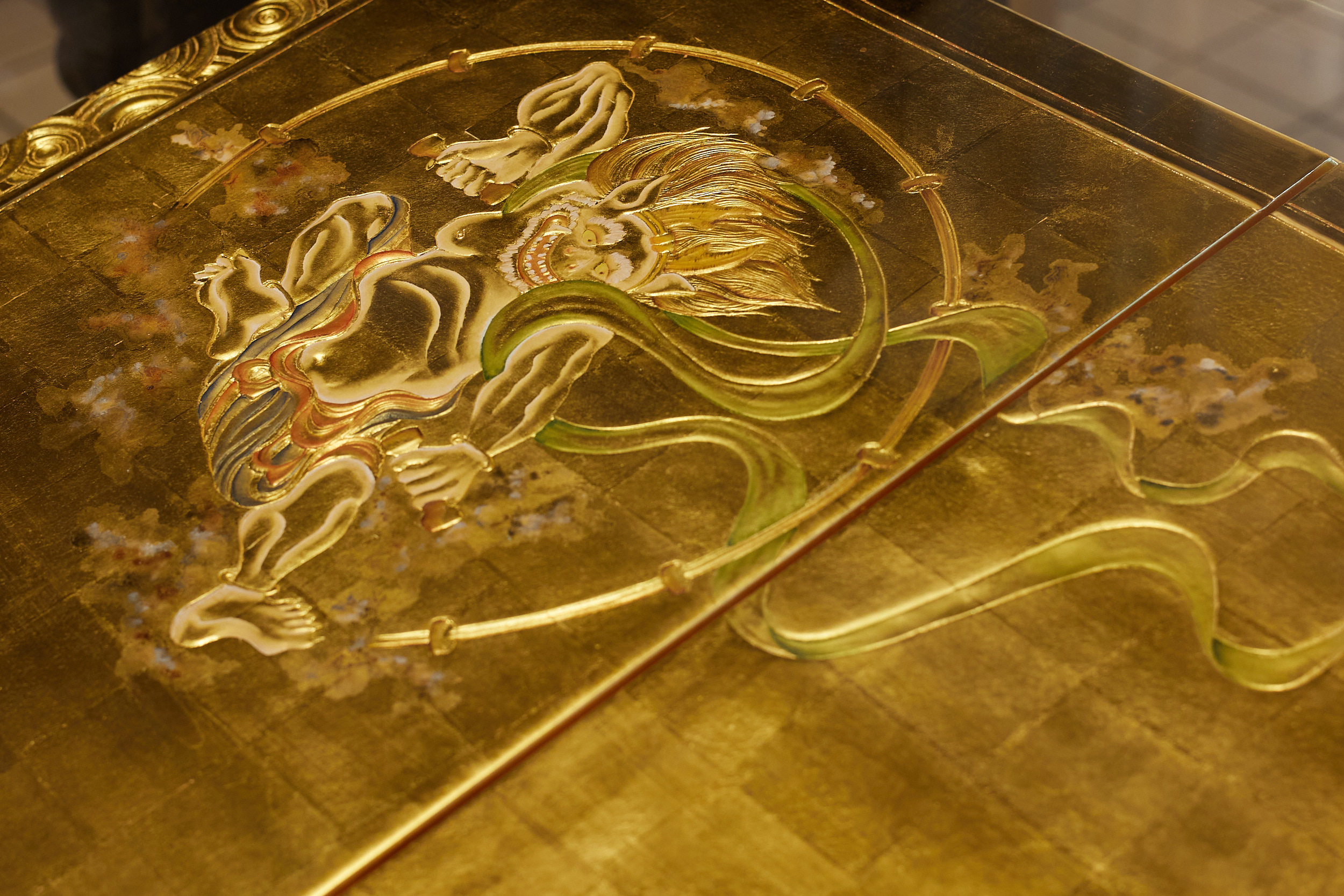 Vacheron Constantin is back to Homo Faber – celebrating artisanal talents in a wide range of disciplines, like fine watchmaking, enamelling or engraving. The Geneva Maison exhibited at the ‘Details: Genealogies of Ornament’ set in the Nautical School exhibition area at Fondazione Giorgio Cini.

We recently witnessed the re-birth of a Vacheron Constantin icon at Watches and Wonders where the brand presented its latest watch novelties. Beside the great timepieces the company is also well known for its highly artistic creations and fine details. In 2018 I met with one of their master enamelers who showed me the sculpture-like grisaille technique applied on enamel.

This year we had the opportunity to experience other facets of the ‘métiers d’art’ from the manufacture.

Vacheron Constantin pays tribute to Japan – the ‘Guest of Honour’ at Homo Faber 2022 – with two engraved white gold Les Cabinotiers Thunder God and Wind God timepieces, inspired by Japanese mythology. Raijin (the Japanese god of thunder, light and storms) and Fujin (his brother, the god of the wind) are among the most feared and respected Japanese deities.

The dials refer to a painting by the famous 16th century Japanese furniture designer and painter Sōtatsu, considered a national treasure in his country. His original work is at the Kennin-ji temple in Kyoto.

As Vacheron Constantin explains – ‘the 18k yellow gold dial is first adorned with intaglio-type fine line engraving to reproduce an irregular chequered pattern featuring matt and shiny surfaces creating the illusion of gold leaf decoration. A layer of transparent flux fired in the kiln is then applied to protect this base, which is thus ready for miniature enamel painting. Between six and seven firings were necessary to stabilise the colours of Fujin and Raijin on their clouds. A layer of overglazing flux, given a final polish using the lapping technique, concludes a process requiring a hundred hours of meticulous craftsmanship.’

The master engraver showed us her extensive and meticulous work on different pieces – she is involved in the creation of unique pieces and special limited editions like this. The Raijin watch is engraved with volutes representing the waves of thunder. There are also similar intaglio motifs on the case of the watch portraying Fujin in order to represent the filaments of clouds blowing the wind. 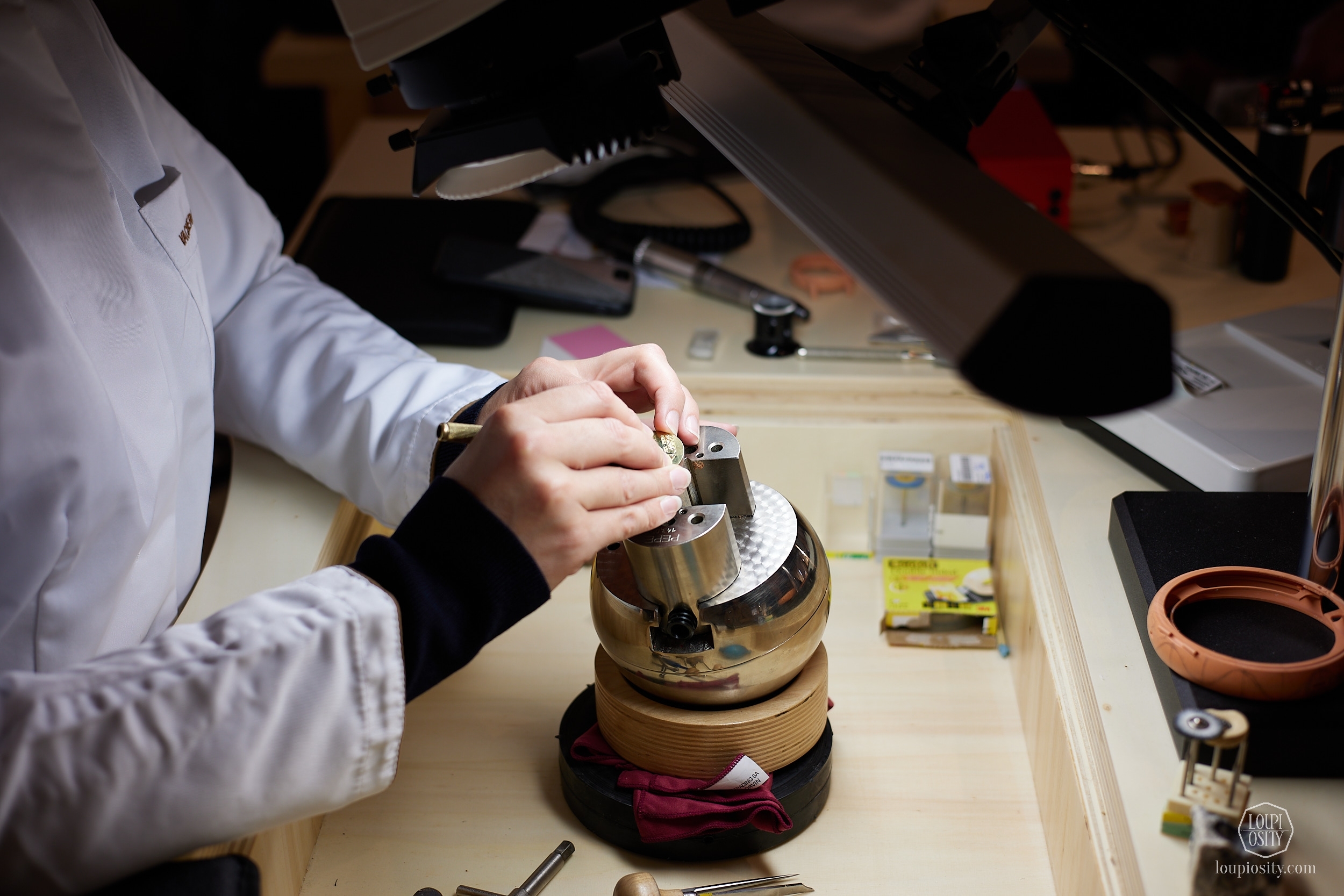 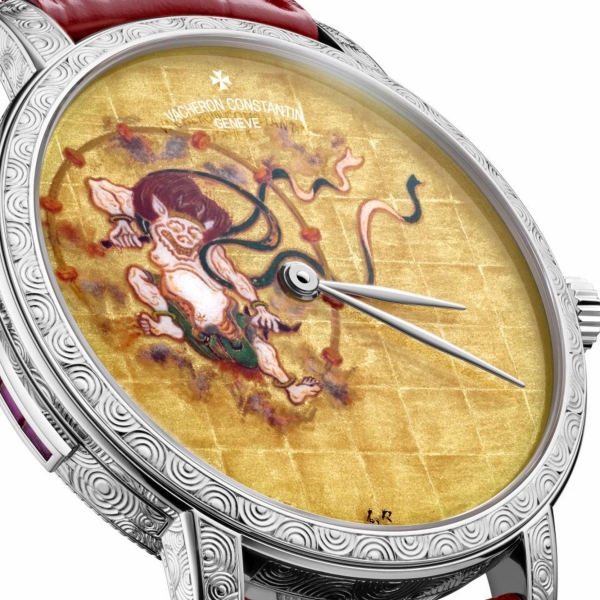 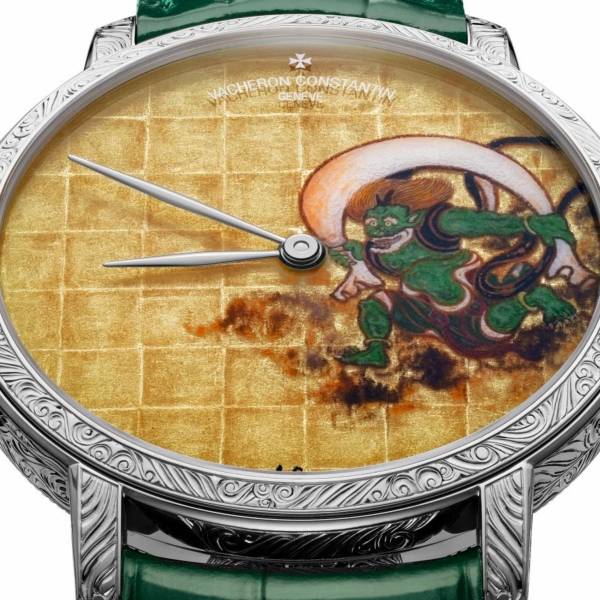 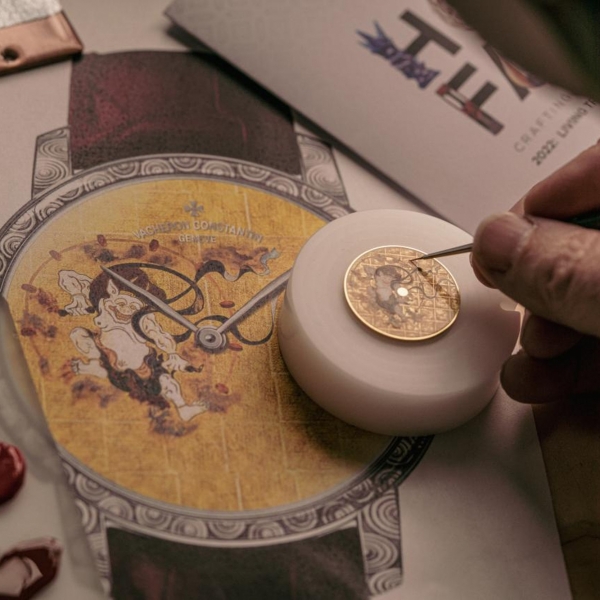 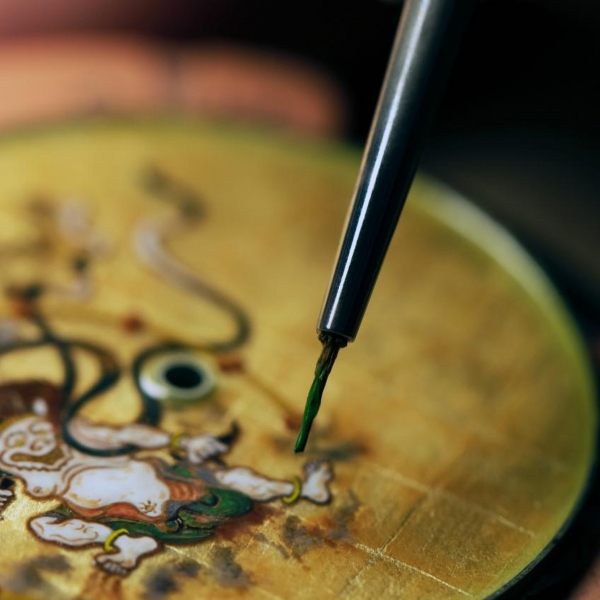 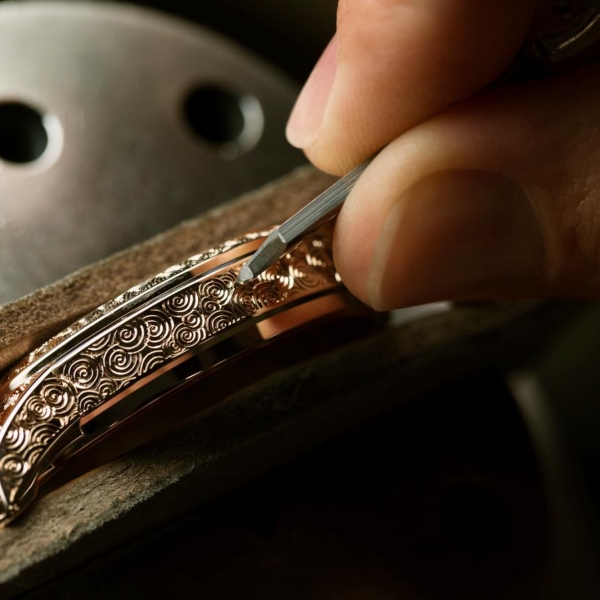 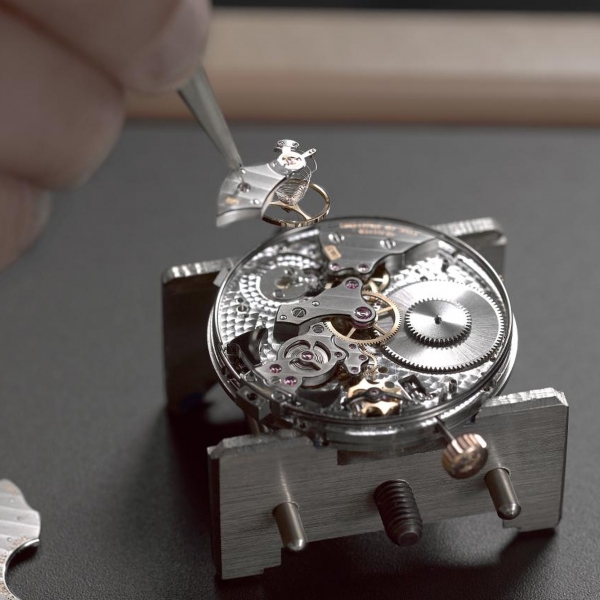 We were already lucky enough to hear the superb quality sound of the Vacheron’s minute repeaters, but – as the master watchmaker on site shares his impressions – for those who are witnessing it first, it could be really surprising.

The minute repeater watches were introduced in times when there was no constant source of light, so it was very practical to have a watch which could strike the time on demand. Minute repeaters for clocks were first introduced in 1676 by Edward Barlow (with the so-called rack and snail striking mechanism) and a different version was issued by Daniel Quare in 1986. At the end of the 18th century, A.L. Breguet designed a mechanism that would strike the hours, quarters and minutes.

Assembling a minute repeater could take a watchmaker 200 to 300 hours of work, a great amount of knowledge and practice – many trials and errors in hand-tuning to produce a nice sound. One timepiece will never sound exactly like another. 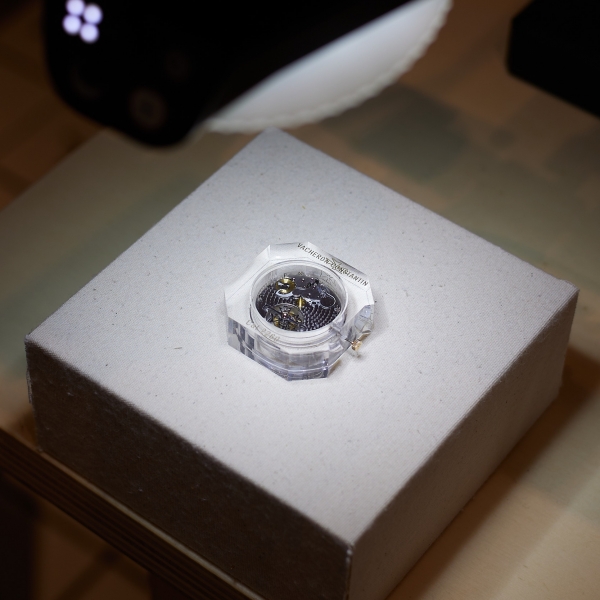 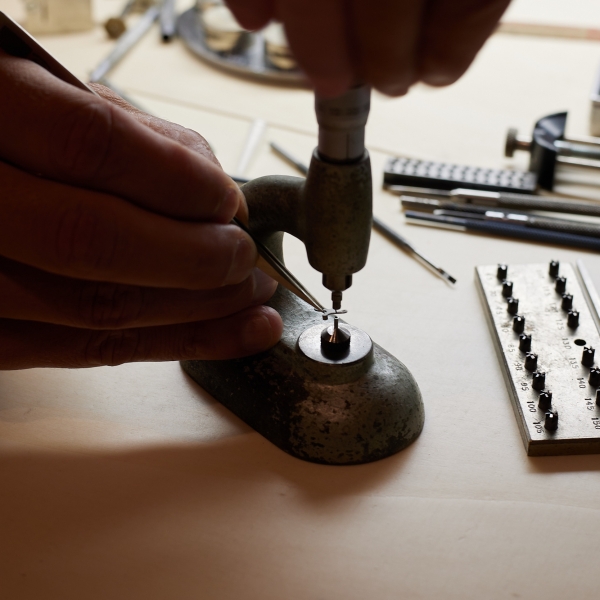 Vacheron Constantin is a partner of the Louvre Museum – the company supported the restoration of ‘La Création du Monde’ for example, an 18th century masterpiece-clock displayed in the Louvre. The brand also offered a bespoke watch featuring a reproduction of a masterpiece from the Louvre in Christie’s Bid for the Louvre auction.

The Louvre has 13 artistic craft workshops: framers and gilders, marble workers, carpenters and cabinet makers, metalworkers, drawing fitters, painter-decorators, upholsterers and many others. These workshops ensure the conservation of the intangible heritage of the museum.

At Homo Faber two amazing artisans were there at the scene from the framing-gilding workshop of the Louvre. They created a quadriptych for the occasion, inspired by scenes from Japanese mythology, which can be found on the two, single-edition timepieces of Vacheron Constantin. 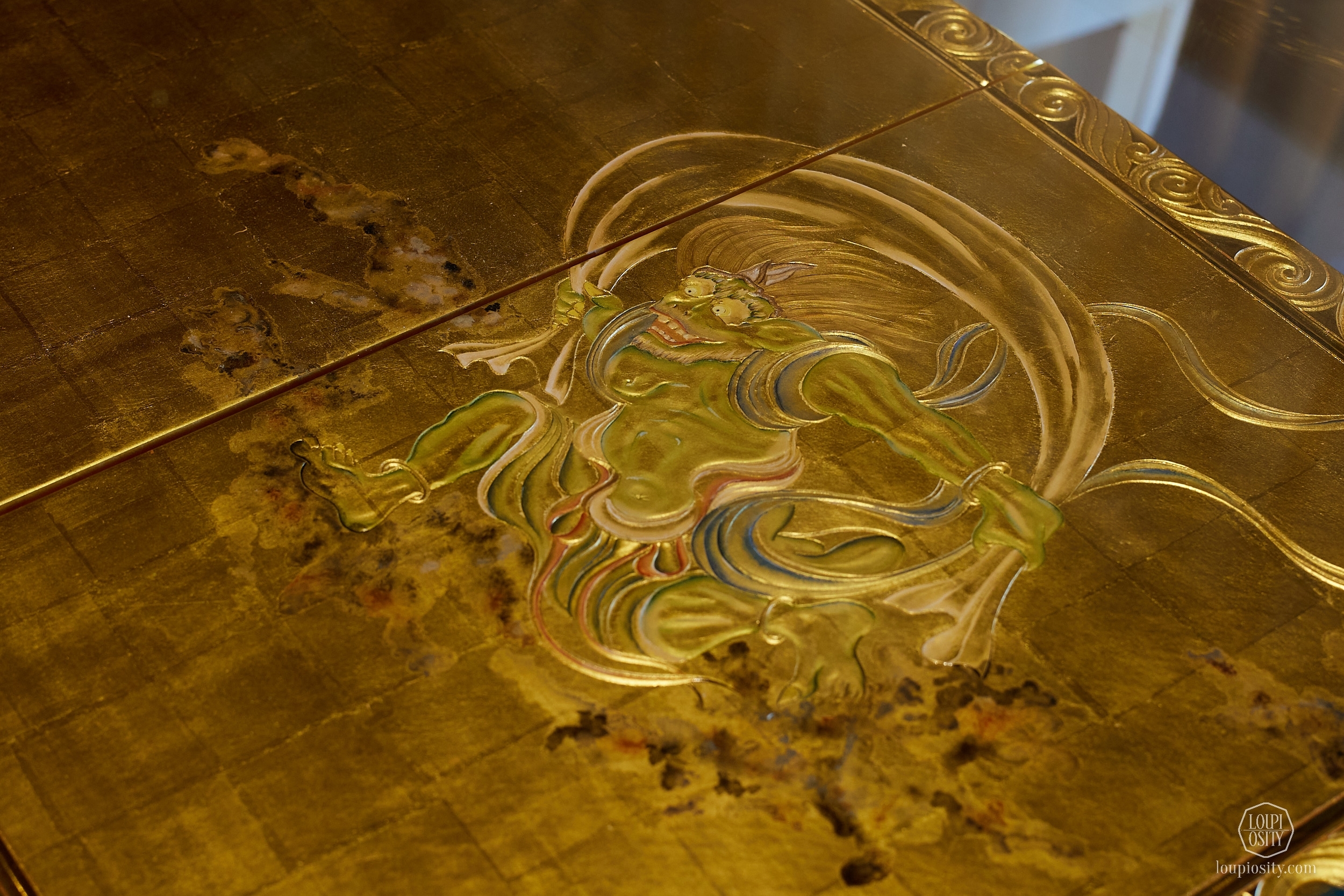 The gold gilders revealed some steps of the creation – the oak wood panels were de-greased to ensure that the preparations could fully adhere to the base. After 25 coats of primer and careful sanding, the designs are applied, engraved and then repaired – a technique using dedicated repair tools and endowing the engraved object with strength and volume.

The four panels are then prepared for gilding using the ‘tempera’ or water gilding technique. After a drying period, some parts are burnished by rubbing them with an agate stone giving a gleam and glister to the gold, while the unburnished parts were given a matt coating with diluted glue. Finally the motifs are coloured with oil paint. 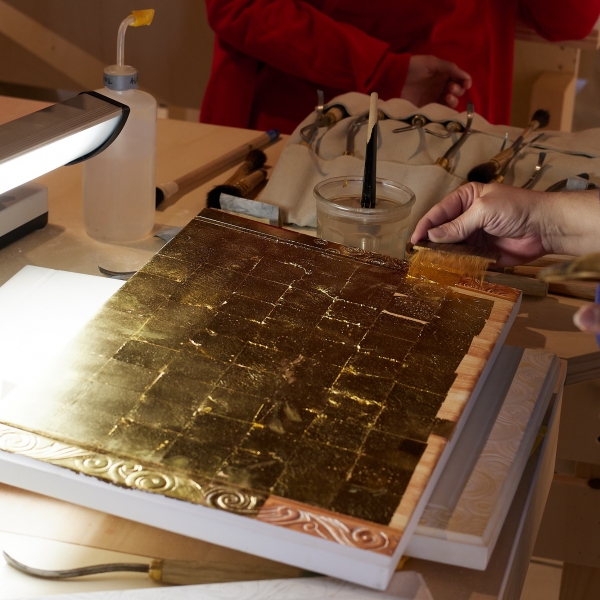 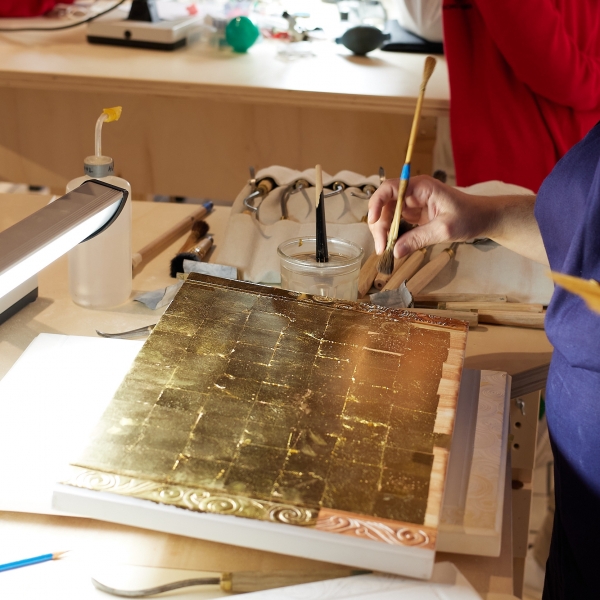 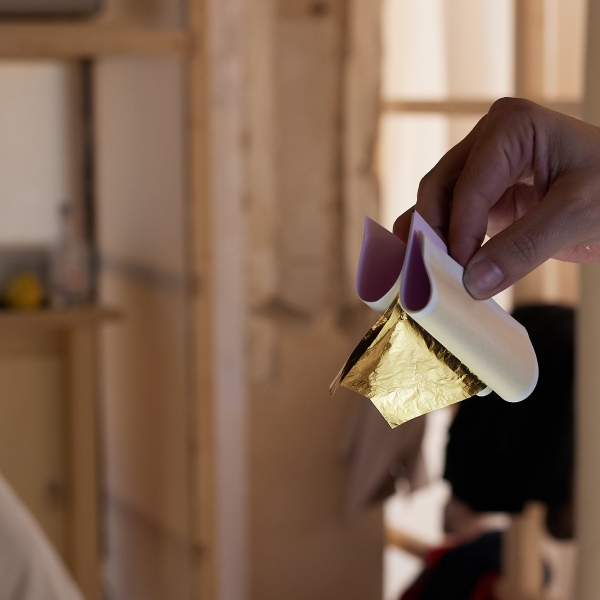 A Masterpiece on your wrist Vacheron Constantin is auctioning a Les Cabinotiers watch at the ‘Bid For the Louvre’ auction organised online from December 1st to 15th by the Louvre Museum and Christie's, with the support of Drouot.'Details: Genealogies of Ornament' - Homo Faber 2022 The ‘Details: Genealogies of Ornament’ is set in the Nautical School area at Fondazione Giorgio Cini. It is one of 15 exhibitions that comprise the Homo Faber Event 2022, organised by the Michelangelo Foundation. Vacheron Constantin - Métiers d'Art Tribute to great… Vacheron Constantin presented a number of novelties under the motto ‘Classic With a Twist’ at the Watches & Wonders 2021. New Métiers D’Art creations have also seen the light with a discrete satellite time display as a twist.