Rolex at Watches and Wonders 2022 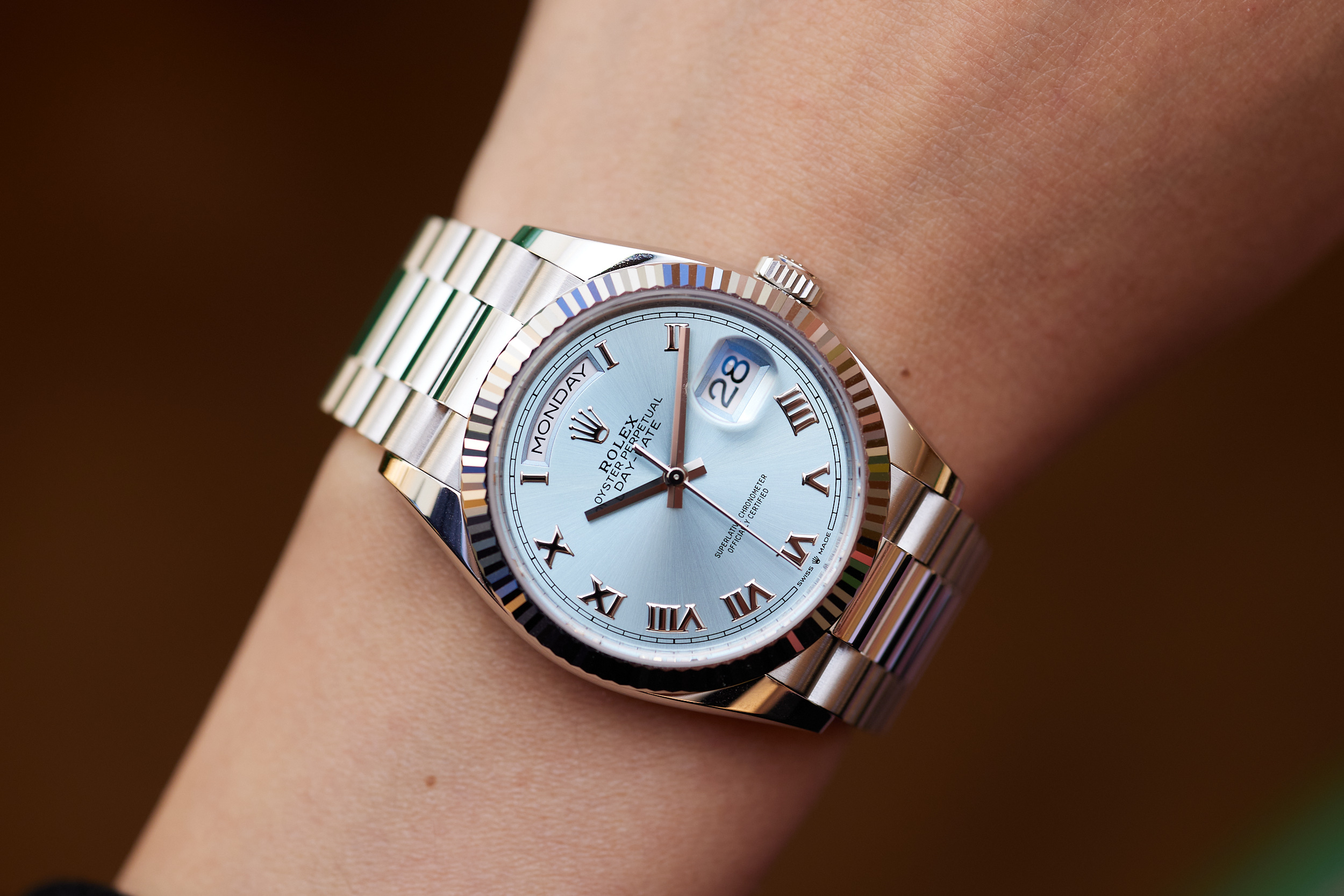 At its first Watches and Wonders Rolex unveiled its latest collection of new watches for this year, which includes the platinum Day-Date 40, latest version of the Air-King or the ‘southpaw’ GMT-Master II.

The last time Rolex exhibited at a big watch fair was at Baselworld in 2019. Since then so much has happened and moved around in the fine watchmaking world but one thing has been steady – everyone’s been wondering what the next step of the watch giant is in terms of exhibiting their novelties. When it was revealed to the public that Rolex had joined the Geneva-based event, the expectations and guesses became very diverse about how this would influence the watch fairs.

Rolex has always had its own way – let it be the own foundry, where it produces its very own gold and steel alloys; the own in-house gemologists and gem-setters to create exceptional dials and bezels or the very strict and secretive markcom strategy.

The arrival of Rolex to Watches and Wonders 2022 definitely changed the game, once again. It could – and already had – both positive and negative effects on the other brands and maybe the visitors and journalists as well. Only time – and some watch industry leaders and board of directors – will tell the next steps and the long-term effects of the super-eminent brands (Rolex and Patek Philippe) joining the Geneva fair.

For many watch fans Rolex can’t do wrong while others are nitpicking every choice of the brand. When we were sitting at the booth (which is I would say is exactly the same as the one you know from Basel, even the gentleman offering coffee remained) and hearing people’s reactions, we were sure – more than with any other watch company, that Rolex has been extremely successful in igniting love in one’s heart, while serious dislike in another’s.

But instead of deliberating further on the image of Rolex, let’s discover some of their novelties.

One of my favourite novelties is the new platinum Oyster Perpetual Day-Date 40 with a fluted bezel, ‘ice blue’ dial and three-piece link President bracelet. 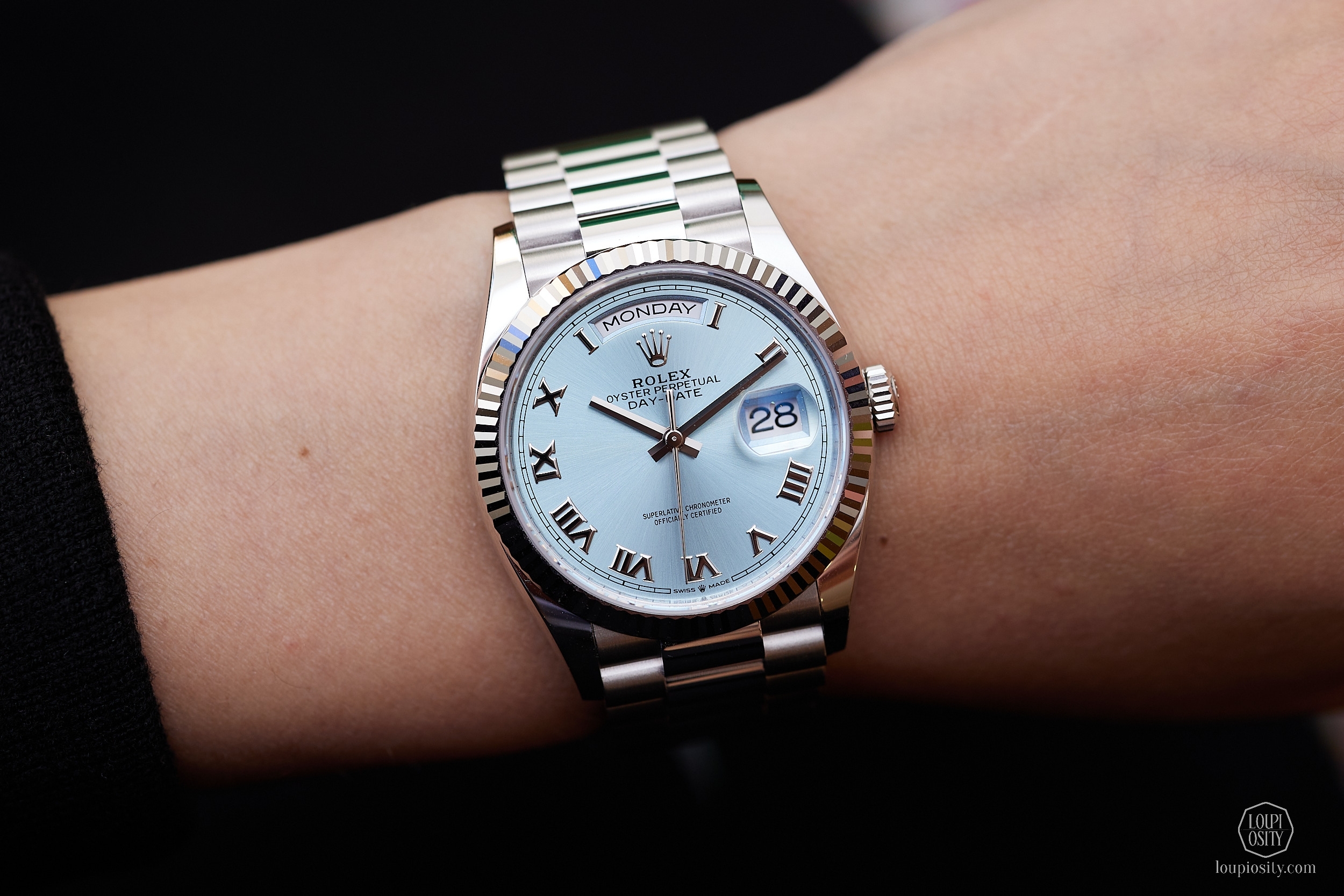 The Day-Date is the most prestigious Rolex model since 1956. It started as the first calendar wristwatch to show the day written in full (available with a bespoke day display in a wide choice of languages), in addition to the date. The models are available exclusively in yellow, white and Everose gold or 950 platinum created in the above-mentioned Rolex foundry.

What reveals a lot about its mythical charm is that it was worn by more presidents, leaders and visionaries than any other watch. As the company described it in an ad in the 1960’s: ‘Men who guide the destinies of the world wear Rolex watches’ and twisted it cleverly in 2000: ‘A Rolex will never change the world. We leave that to the people who wear them’. Known as ‘Presidents’ watch’, ‘Rolex President’ or even ‘El Presidente’, the watch has been the choice of many of the world’s leaders – famous and infamous ones alike. Rolex is great at maintaining the status of its pieces and keeping some undefinable fascination around them, so the Day-Date still remains one of the most iconic watches.

The Day-Date has seen a variety of dials, watch cases and bracelets but according to the company this is the first time with a fluted bezel on a platinum version. The fluting of the Oyster bezel is a Rolex signature from 1926, originally with a technical function – it served to screw the bezel onto the case helping to ensure the waterproofness of the watch (the case-back had the identical fluting, screwed onto the case for waterproofness, using specific Rolex tools). The fluted bezel now is an aesthetic feature and it could be found on the Day-Date, Datejust or Skydweller models for example.

Depending on the model, the number of the grooves (62-76) of the fluted bezel and the angle of the cut can change. Platinum is a heavy, silver-white metal, with a high melting point and good resistance to corrosion and chemicals. It is difficult to work with; it cannot be re-used and re-melted like white gold. As Rolex states, it requires highly skilled engineering and micro technological work to create this kind of a bezel, especially working with platinum – the process had to be adapted to this metal.

The ‘ice blue’ dial colour is a Rolex platinum’s signature and makes the cool toned metal even more frosty.

The watch houses the Calibre 3255, which has increased physical performance in many dimensions compared to its predecessor: precision is twice as good as the COSC requirement for chronographs –somewhere between 2-3 seconds +/- a day and enlarged autonomy by 50% to 70 hours. (See more about the movement launched in 2015 here.) 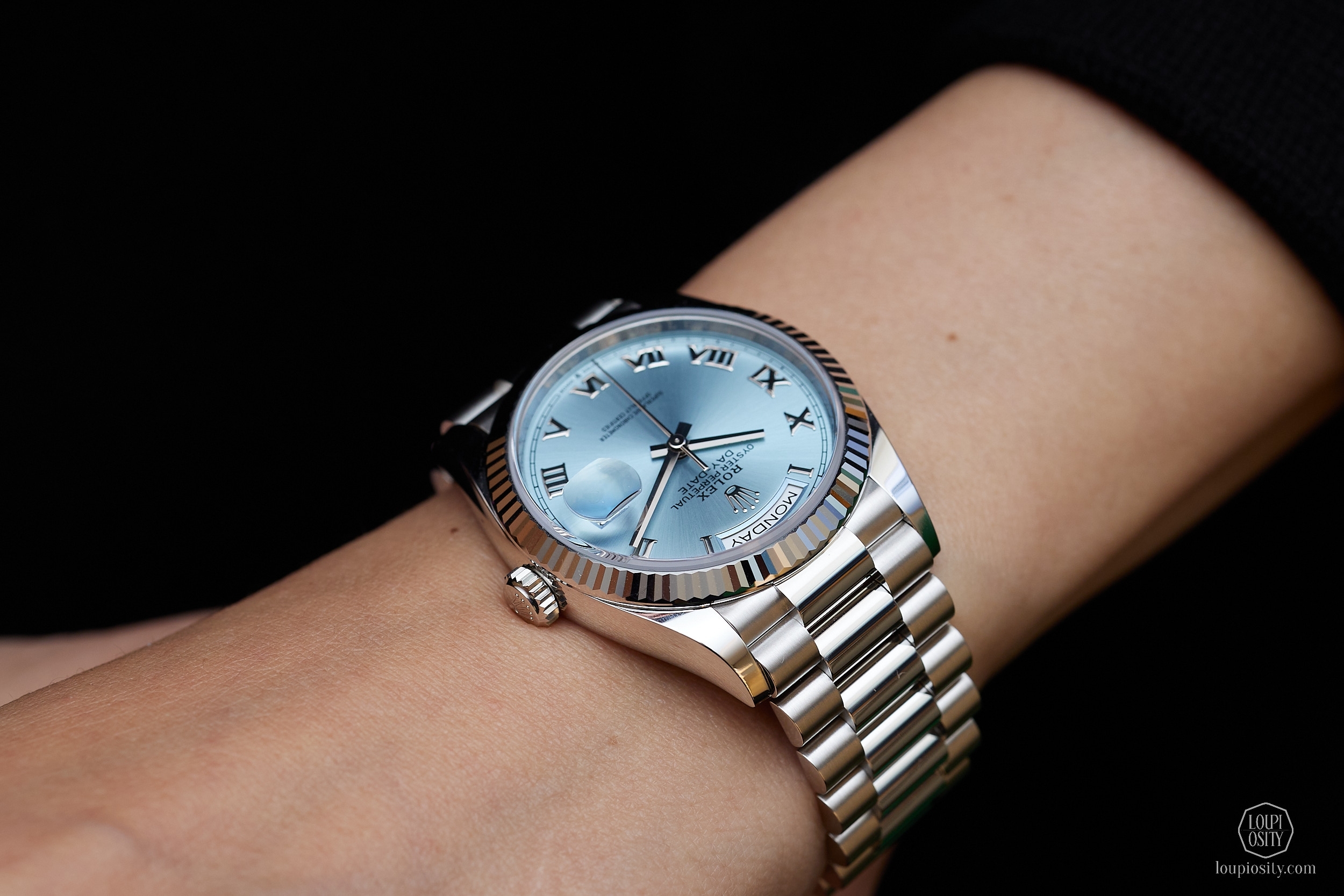 The Air-King is a divisive watch even among Rolex believers. Some appreciate it for its simplicity and to-the-point design while others think it is too low-key and not characteristic enough to be a true Rolex.

The story of the model dates back to the 1930’s. The pilots of the British Royal Air Force (British RAF – later they played a large role in WWII) used Rolex Oyster Perpetual watches on their missions. As Charles Douglas Barnard (a British aviator, who served in WWI and had record-breaking flights) declared: ‘The peculiar qualities of this Rolex watch render it eminently suitable for flying purposes and I propose to use it on all my long-distance flights in the future’.

Hans Wilsdorf quickly reacted and decided to launch a line for the royalty of the air. There were a few preceding versions but the first actual Air King was born in 1945. The line remained popular, the Air King 5500 was maybe the most coveted model.

A revamped Oyster Perpetual Air-King was introduced at Baselworld 2016 and now here is the latest Air King, 40mm in Oystersteel. The most obvious change is the addition of the crown guard and the sharper, flat-sided case. The flat three-link bracelet comes with the folding Oysterlock safety clasp.

The Air-King dial features a glossy black dial with a combination of large 3, 6 and 9 numerals marking the hours and the ‘5’ minute marker has now become ‘05’ for the more balanced look of the dial. 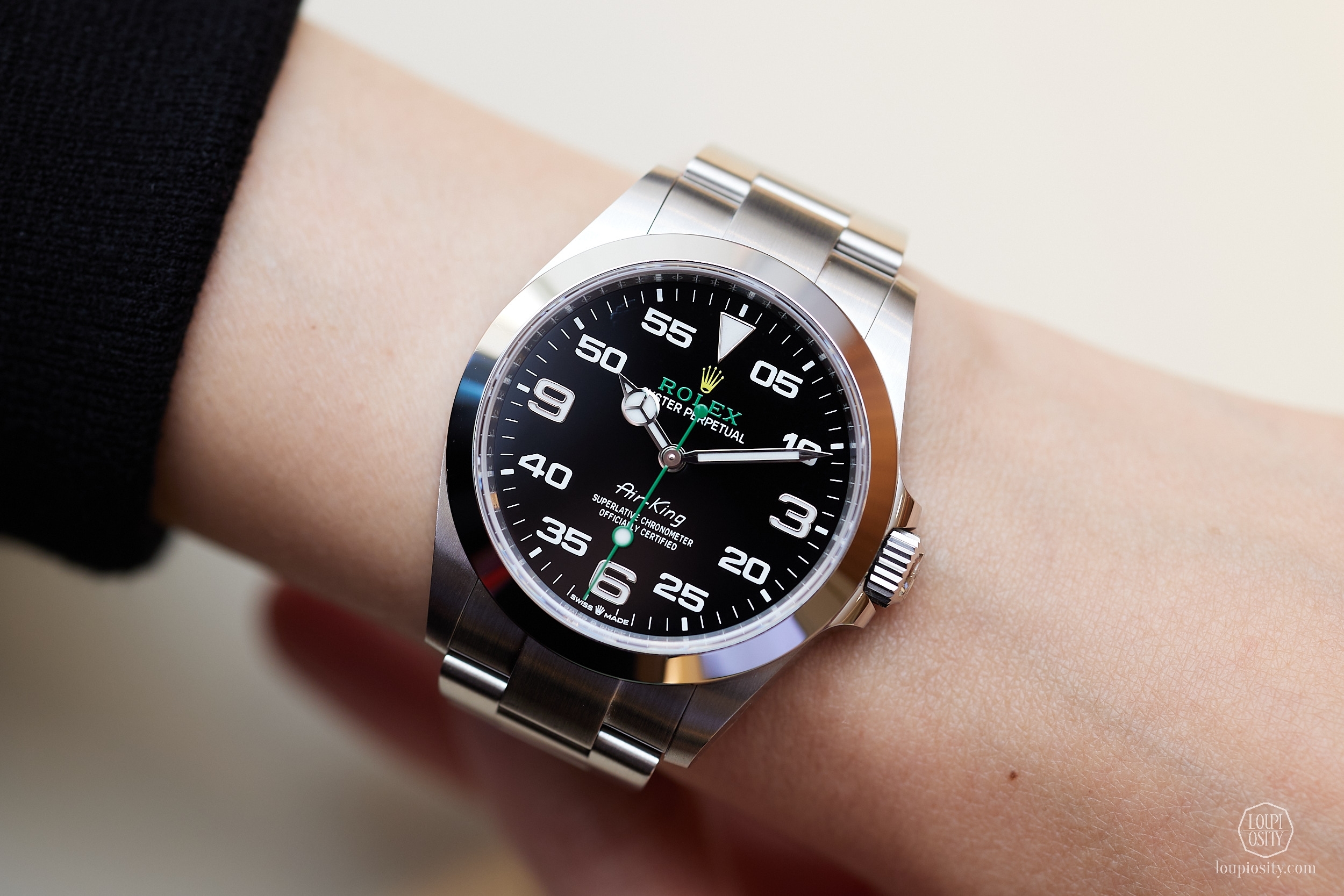 The self-winding calibre 3230 ticks inside with 70 hours of power reserve and it incorporates the patented Chronergy escapement, which combines high energy efficiency with great dependability. Made of nickel-phosphorus, it is also insensitive to magnetic fields.

The hands, the triangular hour marker at 12 o’clock and the 3-6-9 are filled or coated with a new luminescent material that provides a longer-lasting intense glow. 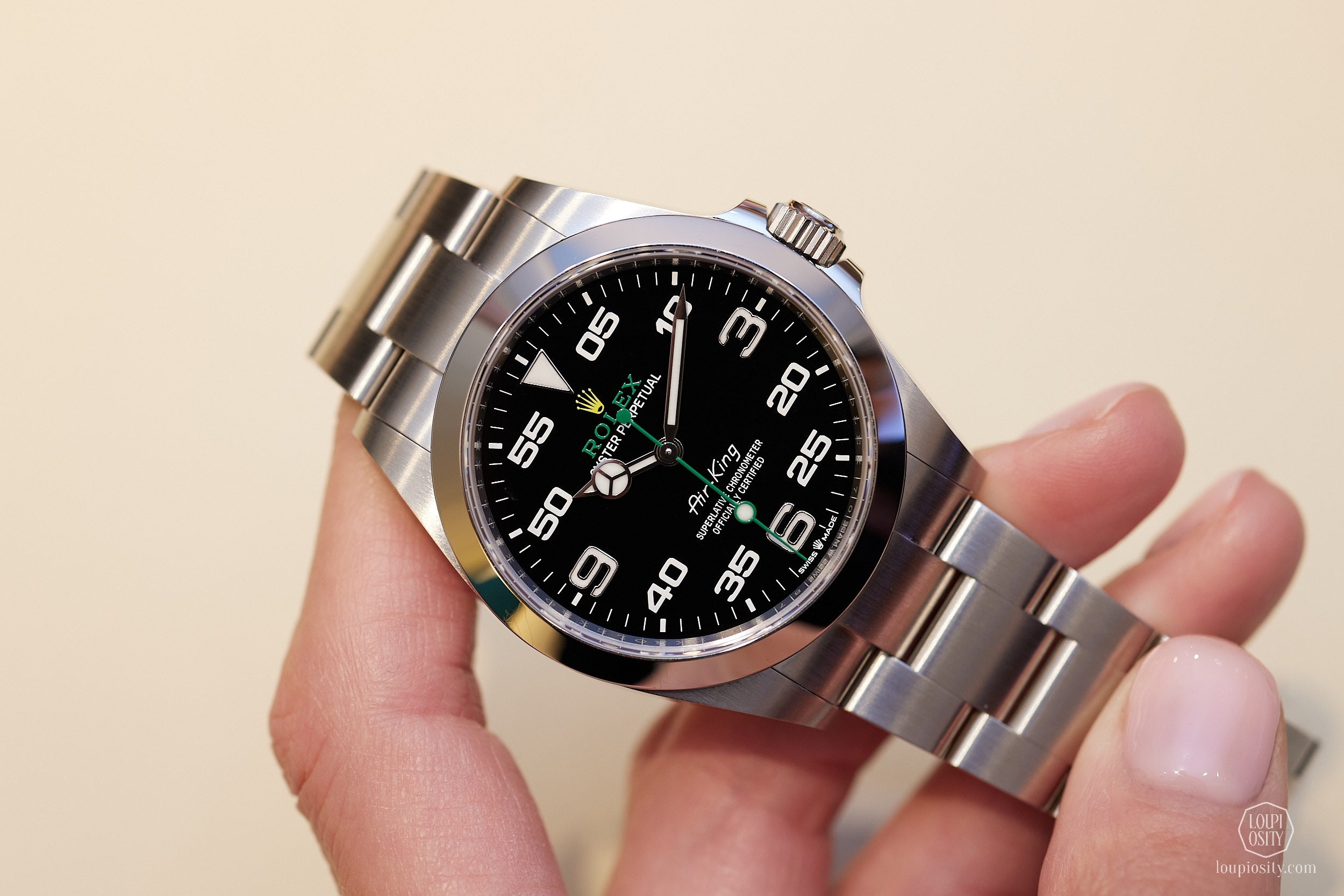 Rolex offered a nice bouquet for spring – with the ever classic 31mm Datejust models. The Datejust was originally introduced in 1945 to celebrate the 40th anniversary of the company and it is one of the oldest lines of the brand still in production – Rolex fine-tunes the line consistently. The Rolex Datejust is available in a wide variety of different metal combinations, dial, bezel, and bracelet options. The recent versions of the Datejust 31 are equipped with the calibre 2236 (it was released in 2014 and has been fitted on this model since 2018).

There are 24 blooming flowers on the dials, either with sunray, matt or grained finishing. Each of the flowers has a diamond set in the centre. 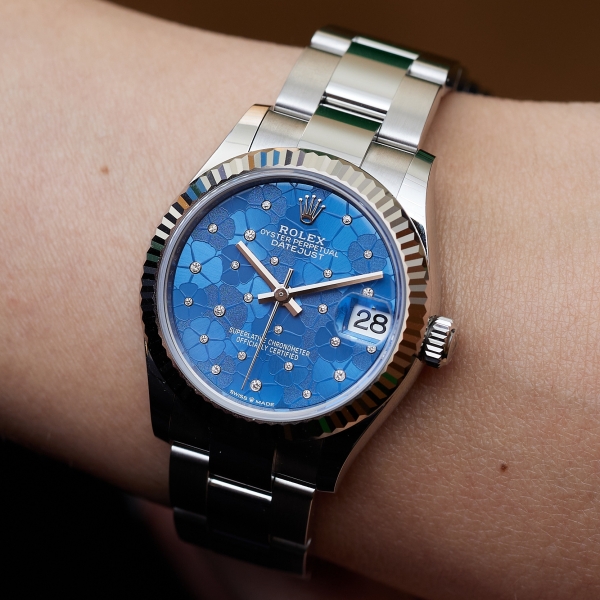 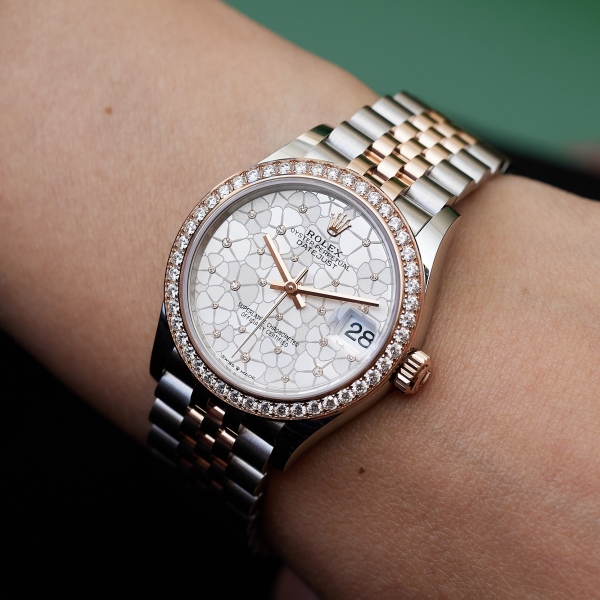 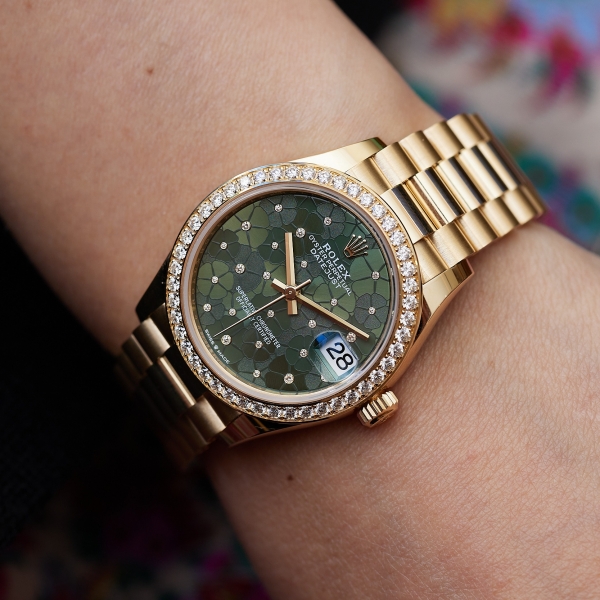 We were sitting in one of the presentation rooms of Rolex and I thought I followed the presentation properly but as soon as I got the new GMT-Master II in my hands, I flipped it without even looking, out of reflex. Since the crown is on the left side, my right-handed brain wanted to turn the timepiece around. It is a lefty watch, intended (?) for left-handed people or for those who like to wear the watch on their right wrist, like my dad (whose left wrist was somehow more sensitive and found it more comfortable to wear his watch on his right one). 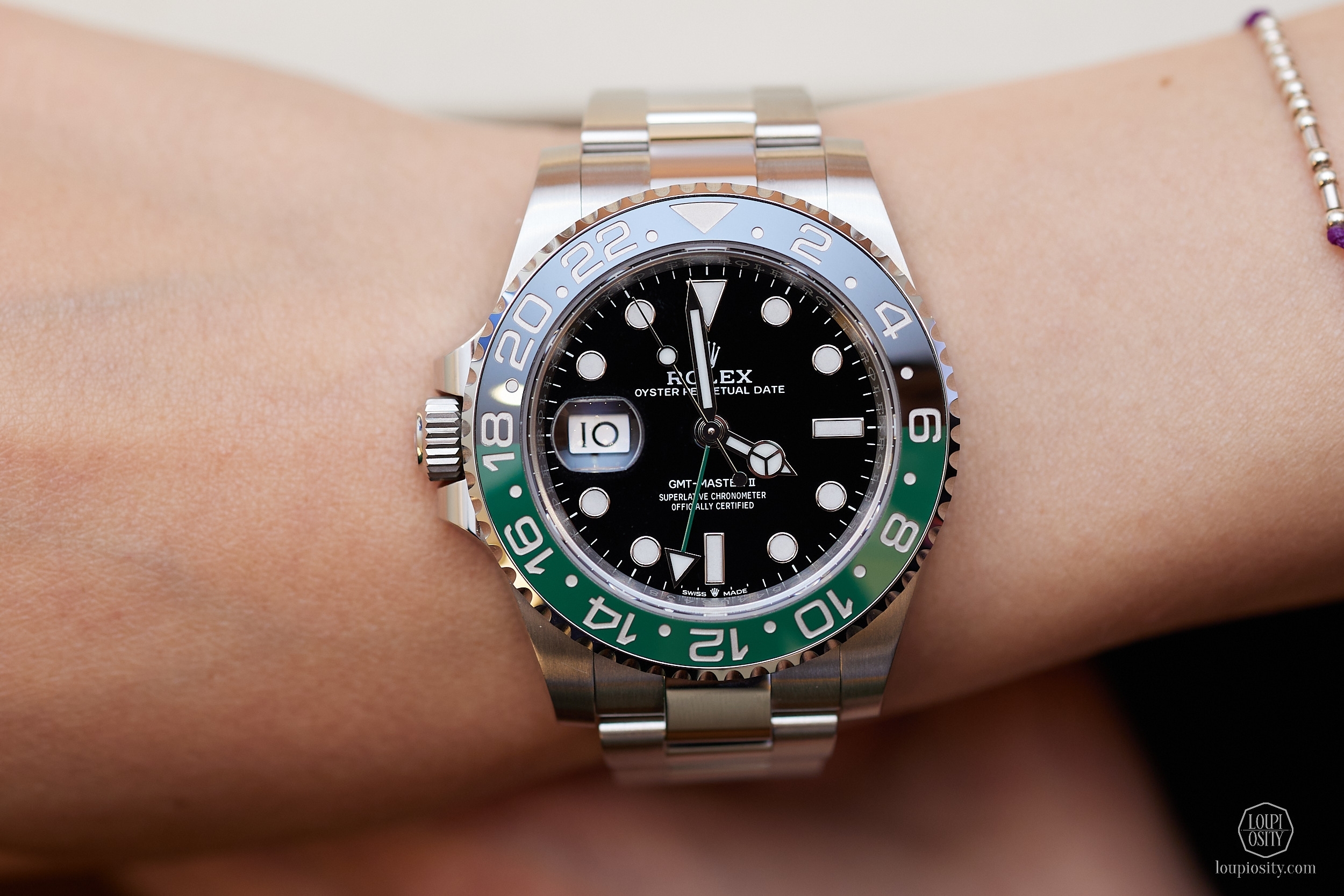 Another novelty is that the bidirectional rotatable bezel is fitted with a two-colour, 24-hour graduated Cerachrom insert in green and black ceramic. Cerachrom – introduced in 2005 – is a highly scratch- and UV-resistant ceramic material, which made its way onto the GMT-Master series too. The 2018 edition of the GMT-Master II came in a ‘Pepsi’ colour combination and a brown-black ‘Root beer’ version and now the green and black combination.

The GMT watch can show the time in two different time zones simultaneously. It features the self-winding Calibre 3285 which we covered here in more detail. 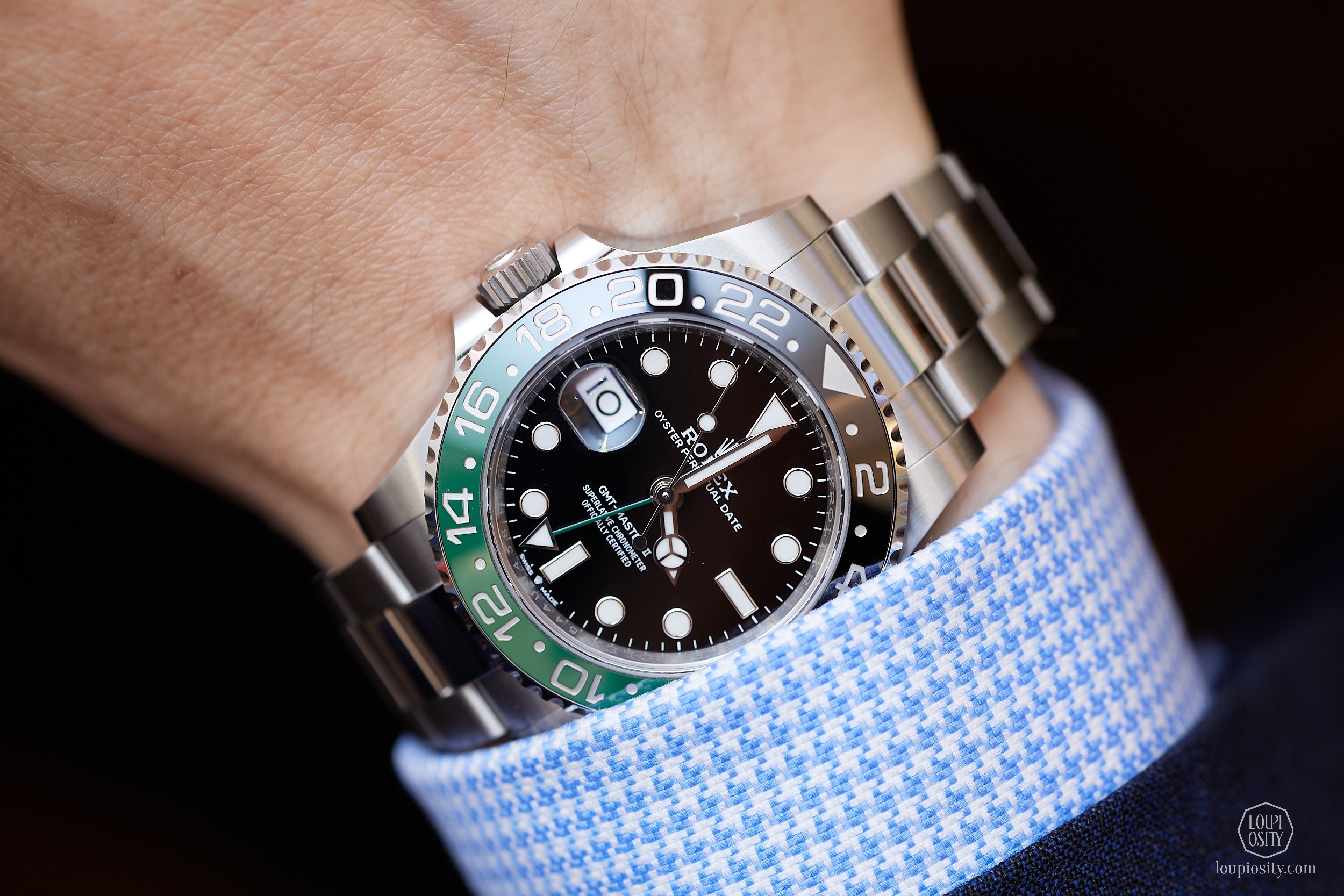 The OAK Collection - Rolex & Independent Chapters 4 out of the 11 chapters of the OAK Collection exhibition are dedicated to pieces of Rolex and independent brands. The vintage and contemporary museum-quality watches include special orders, ultra-rare limited editions and the most valuable examples of particular models. The four-stop exhibition world tour starts in the London Design Museum (19-25 May).The OAK Collection exhibition On 19 May, 162 vintage and contemporary museum-quality watches of the OAK Collection embark on a four-stop exhibition world tour from the London Design Museum (19-25 May). We sum up the 11 exhibition chapters and give you updates as we participate in the pre-opening ceremony on 18 May.IWC Schaffhausen at Watches & Wonders Shanghai IWC Schaffhausen Portugieser Chronograph was released at Watches and Wonders Shanghai with steel bracelet.