Roger Dubuis – Knights of the Roundtable 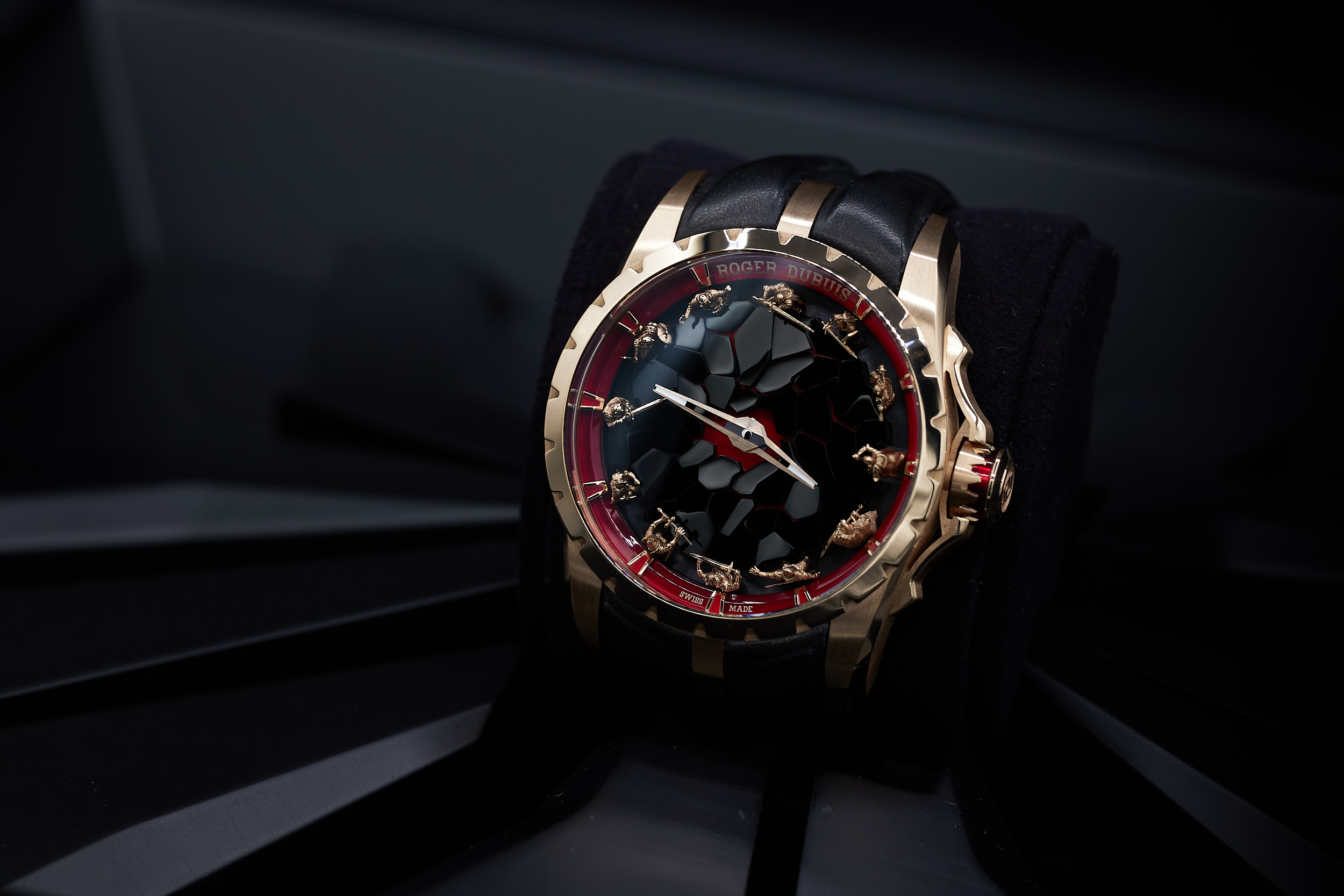 Roger Dubuis presented new additions to the Knights of the Roundtable series. This time, the extreme finishing is paired with extremely detailed knight miniatures frozen in motion and an appealing play of light on Murano glass.

Roger Dubuis is not for the faint hearted. The manufacture has been famous for very technical and sometimes flamboyant models, which all pride themselves in bearing immaculate finishing. With collections called Hyper Watches and Excalibur even someone meeting the brand for the first time shall expect nothing ordinary. The company loves setting its crafting skills, technology and novel materials into breaking the rules and telling stories. They create their own world by fusing the dark and magical Middle Ages and a futuristic technical universe, which manifests in strong Gothic lines and amazing structures in their signature Excalibur collection.

Because many playful collectors identify with this imagined Roger Dubuis world, it is no wonder that the examples of the manufacture’s even more mythical Knights of the Roundtable series sold out very quickly after issuing. The collection has seen multiple editions since its first appearance in 2013. In all previous editions, the tiny knight figures stood straight with their sword pointing to the centre axis. On some models they were detailed, on others depicted with schematic faceted shapes. They were more a symbol of imperturbability and knightly togetherness.

Roger Dubuis presented two new editions this spring, on which the knights are detailed to the extreme, and are frozen in a pose of tense readiness to fight. As if they were sensing danger and just pulled out their weapons to face it. The stage is set with Murano glass in both cases to make the impact greater.

Knights of the Roundtable ‘Magma’ in pink gold

The more ‘classical’ version, the Knights of the Roundtable ‘Magma’ was presented in mid-February, so this was the first time for us to see it in metal. Classical, in the sense that the knights face a known enemy: the blades of the hour and minute hands, like in the previous editions.

The focus is on the figures. They each strike a different expressive posture and therefore they all seem to have their own identity. Some of them with swords, a mace and axe, while others holding their arms as if they’d cast magic on the enemy. Their moves are full of energy and you’re waiting for the action to continue in the next moment.

The cracking pedestal with the unknown creature underneath has a deep silky shine. It is made of Murano glass just like the ‘flame ring’ behind the knights. The black pieces are carefully puzzled together and angled so that they truly lend the feeling of rupturing earth. Between the cracks, the red magma becomes visible. 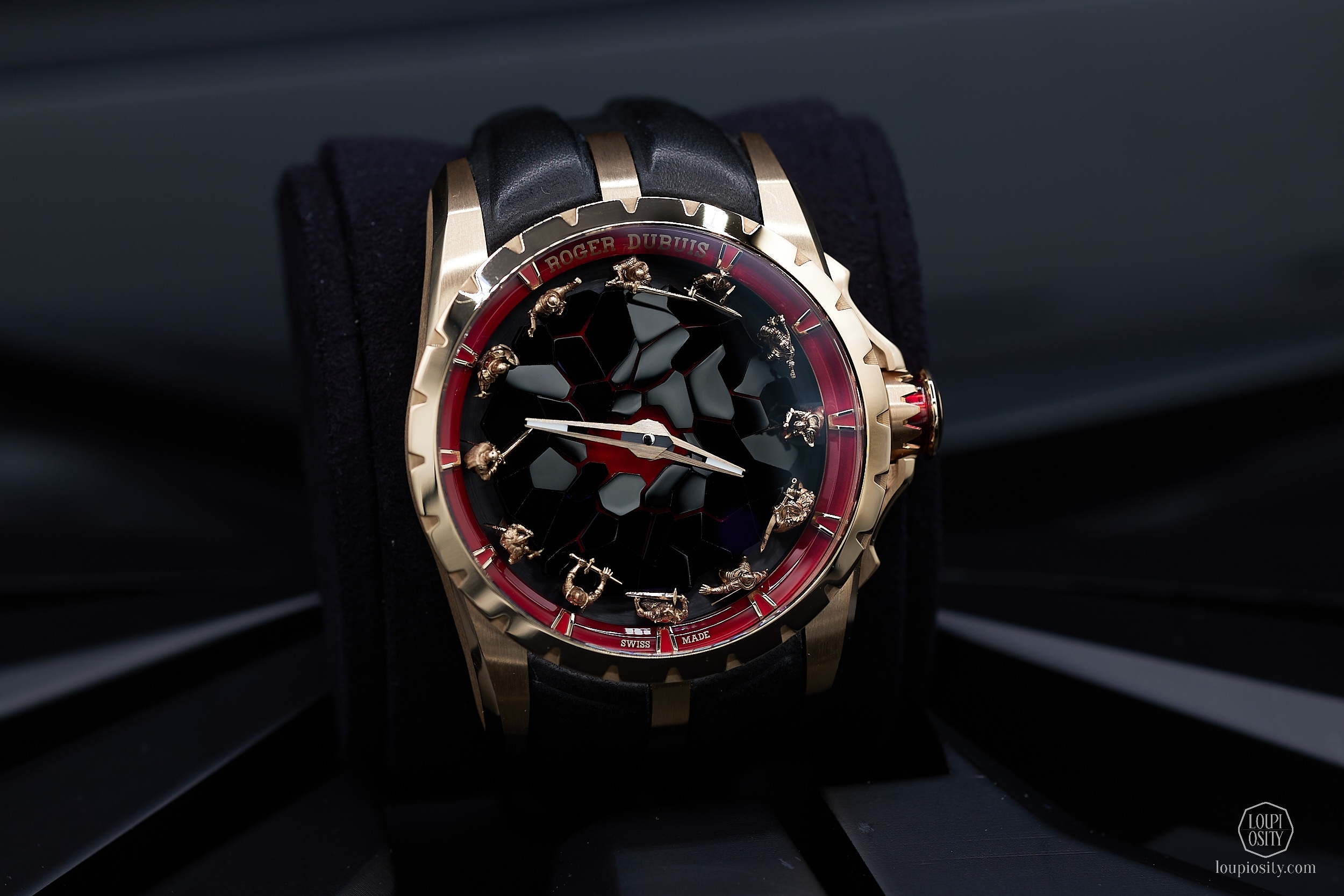 The 45mm case, just like the knight figures is made of 18k 750/1000 pink gold and all of them are meticulously finished. A sapphire ring runs under the bezel, giving a 360 degrees view onto the scene.

In reality, the source of the earthquake is the RD821 automatic calibre hiding under the cracks. With its 172 parts, the 4Hz movement is highly complex compared to its two-hand time-only function. It is the same movement with rhodium-plated ‘Côtes de Genève’ decoration ‘Poinçon de Genève’ finishing, that is used in the previous editions of this series. The RD821 received the Geneva Seal, the guarantee of exclusivity, origin, know-how, performance and durability. The rotor is very interesting at the back with two layers of tilted pyramid shapes moving on each other.

The model is limited to 28 pieces. 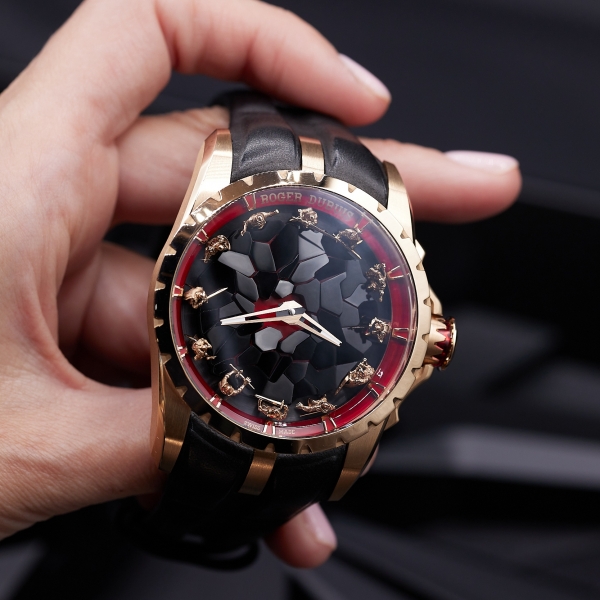 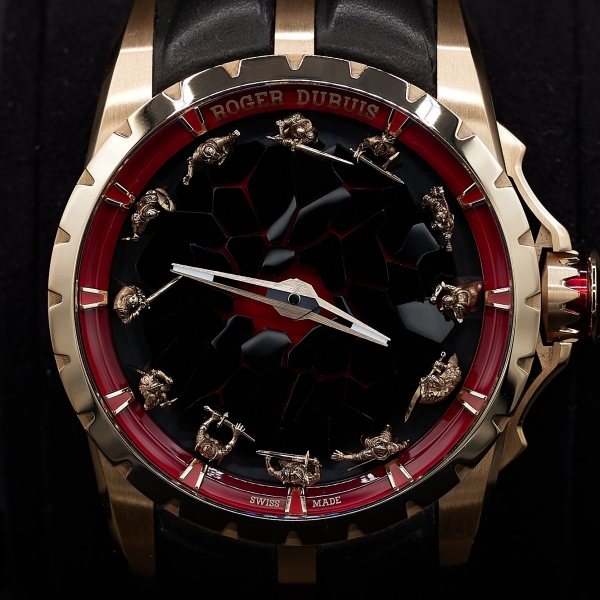 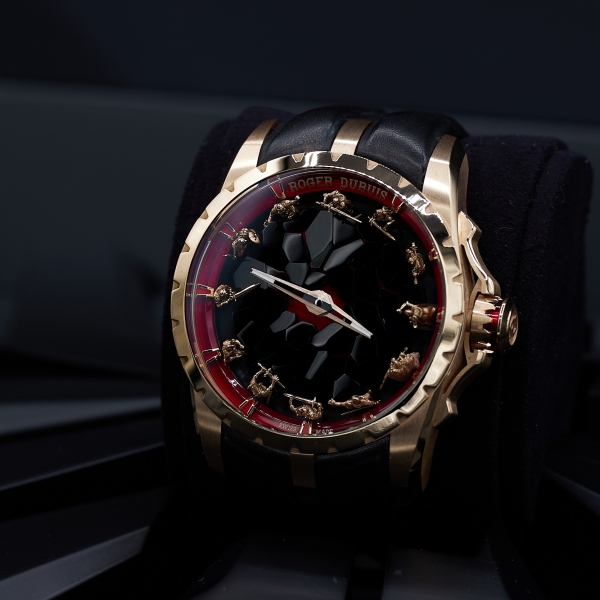 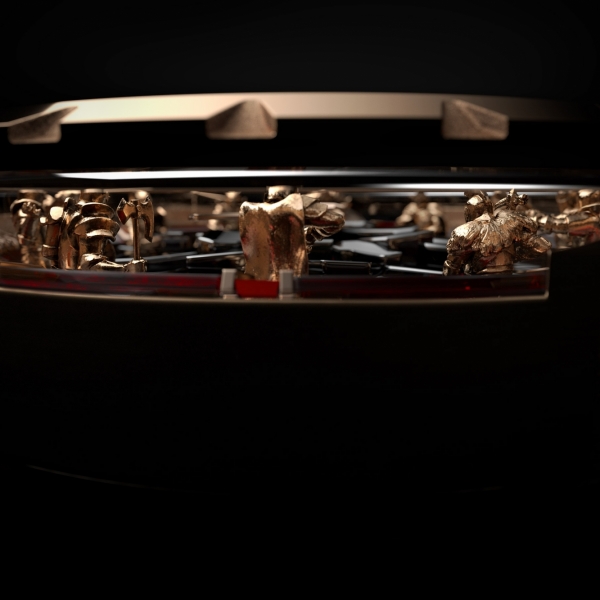 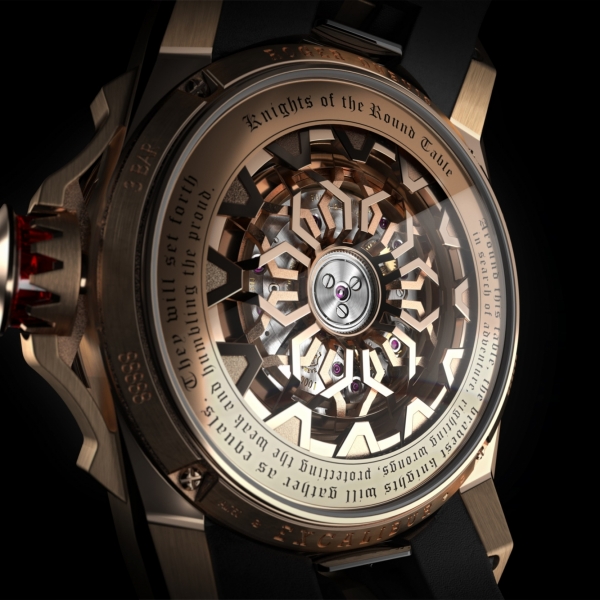 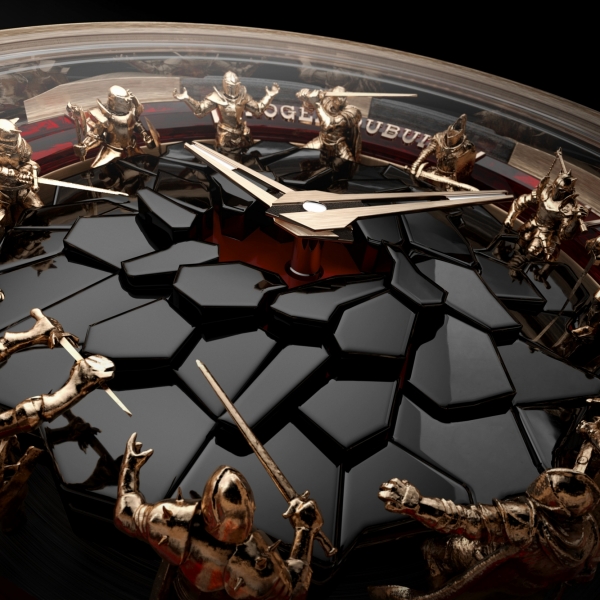 Knights of the Roundtable Monotourbillon in pink gold

This piece was introduced at the Watches and Wonders and it greatly differs from the previous 8 editions as knights surround the manufacture’s Monotourbillon as opposed to sweeping watch hands. This is the first time Roger Dubuis placed a tourbillon into the Knights of the Roundtable series. The hour and minute indication is present, but it is integrated into the circular design in the form of two golden markers rotating among the Murano glass walls on concentric disks. The translucent glass blocks are fixed on both sides of a sapphire disk, which makes the three-dimensional effect even stronger. The purple double surface flange is carved from a single block of Murano glass.

The golden figures are the same 6mm tall alarmed knights as on the ‘Magma’ edition. The case is 45mm pink gold. The RD115 hand-wound calibre has 72 hours power reserve and it is structured to make room for the disks of the ‘roundtable’. It has also received the Geneva Seal.

The model is limited to 8 pieces. 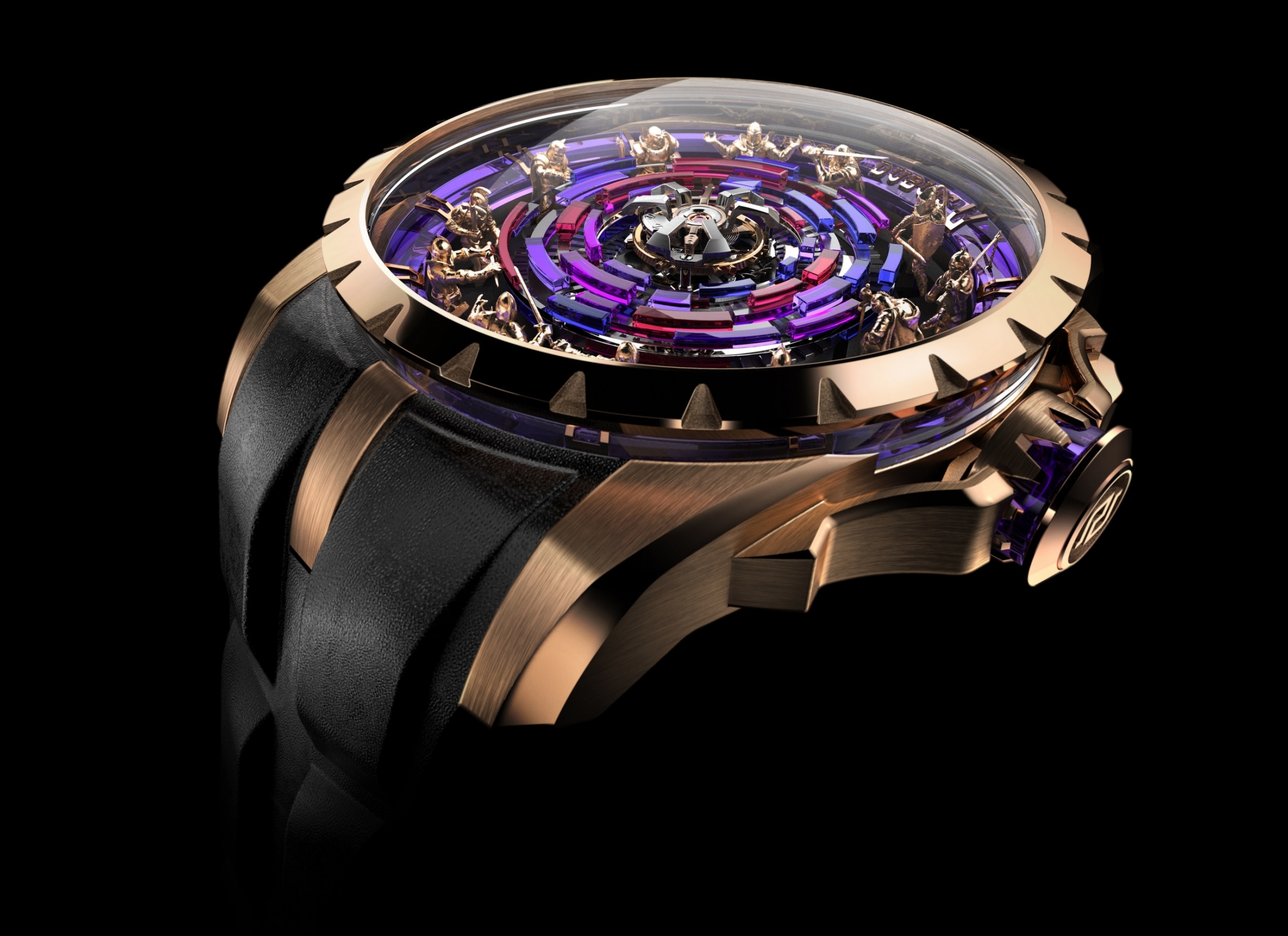 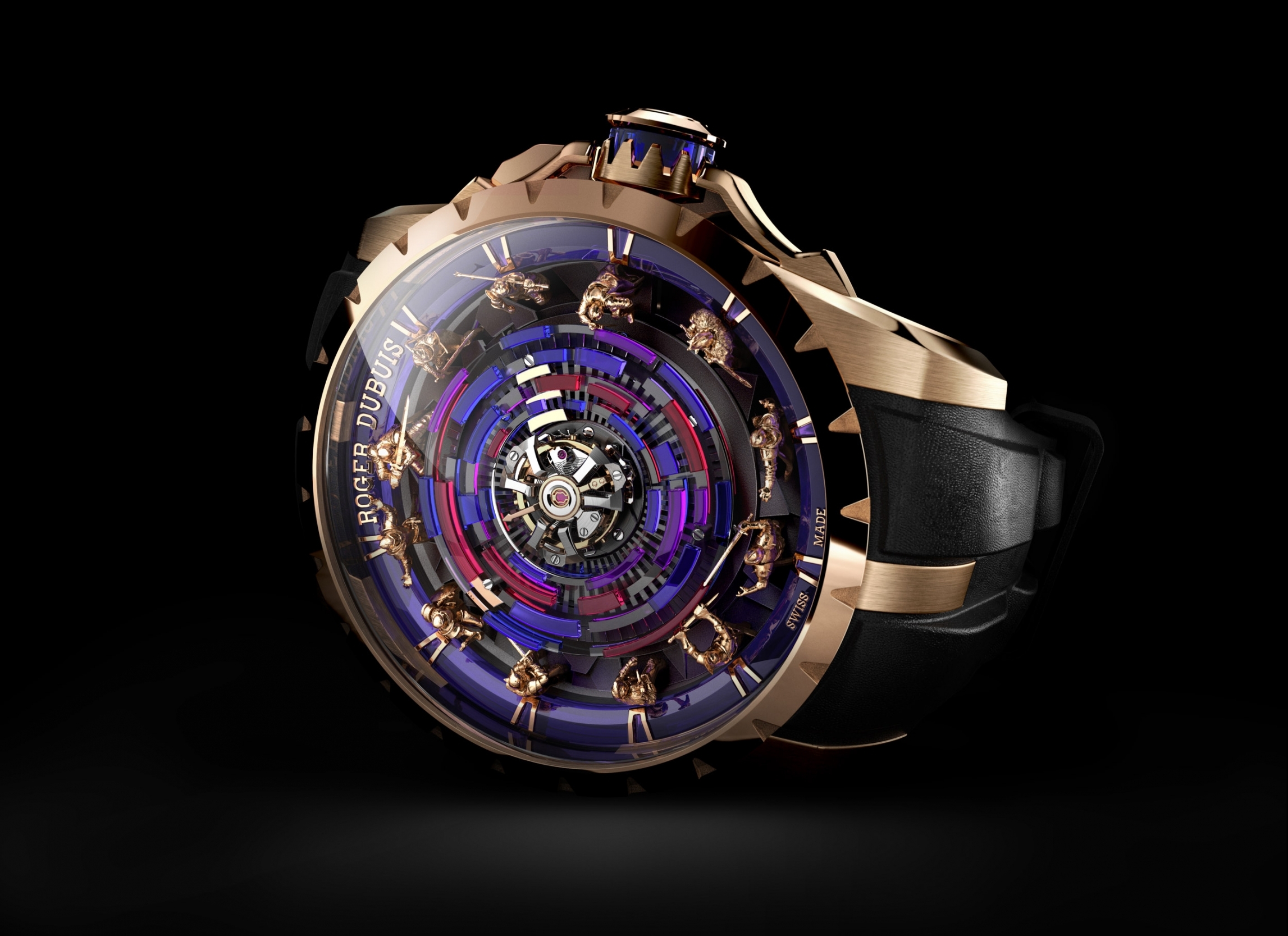 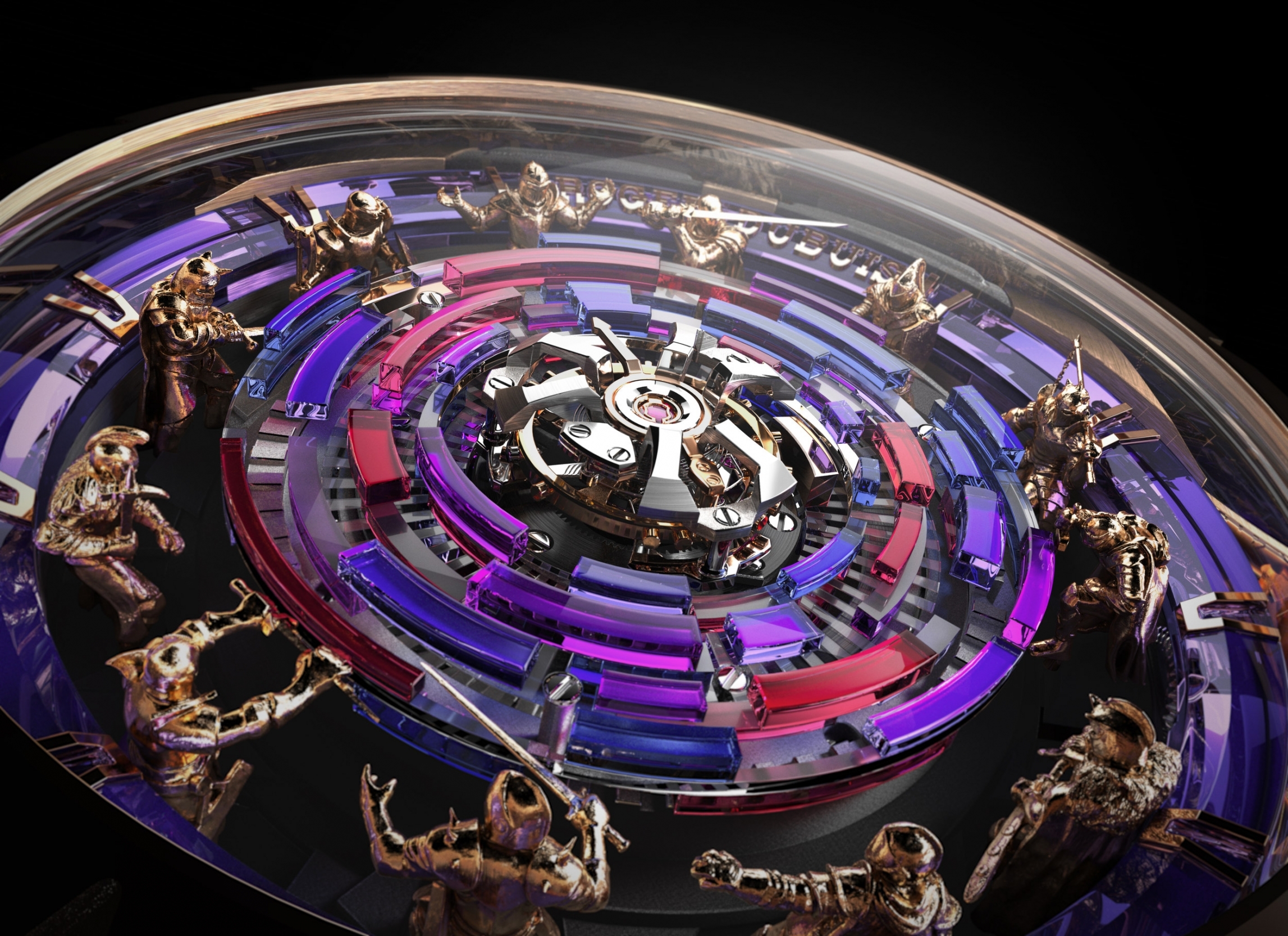 Girls don’t just wanna have fun – Part 23, Watches and… In this series we showcase mechanical and artistic wonders that were especially designed for women and others originally for men that come alive on spirited ladies’  wrists. We participated at the Watches and Wonders 2022 and we browsed a few novelties. IWC Schaffhausen at Watches & Wonders Shanghai IWC Schaffhausen Portugieser Chronograph was released at Watches and Wonders Shanghai with steel bracelet.New views An overview about a few upcoming finewatchmaking events - hopefully all in real life - follow us along.