Patek Philippe at Watches and Wonders 2022 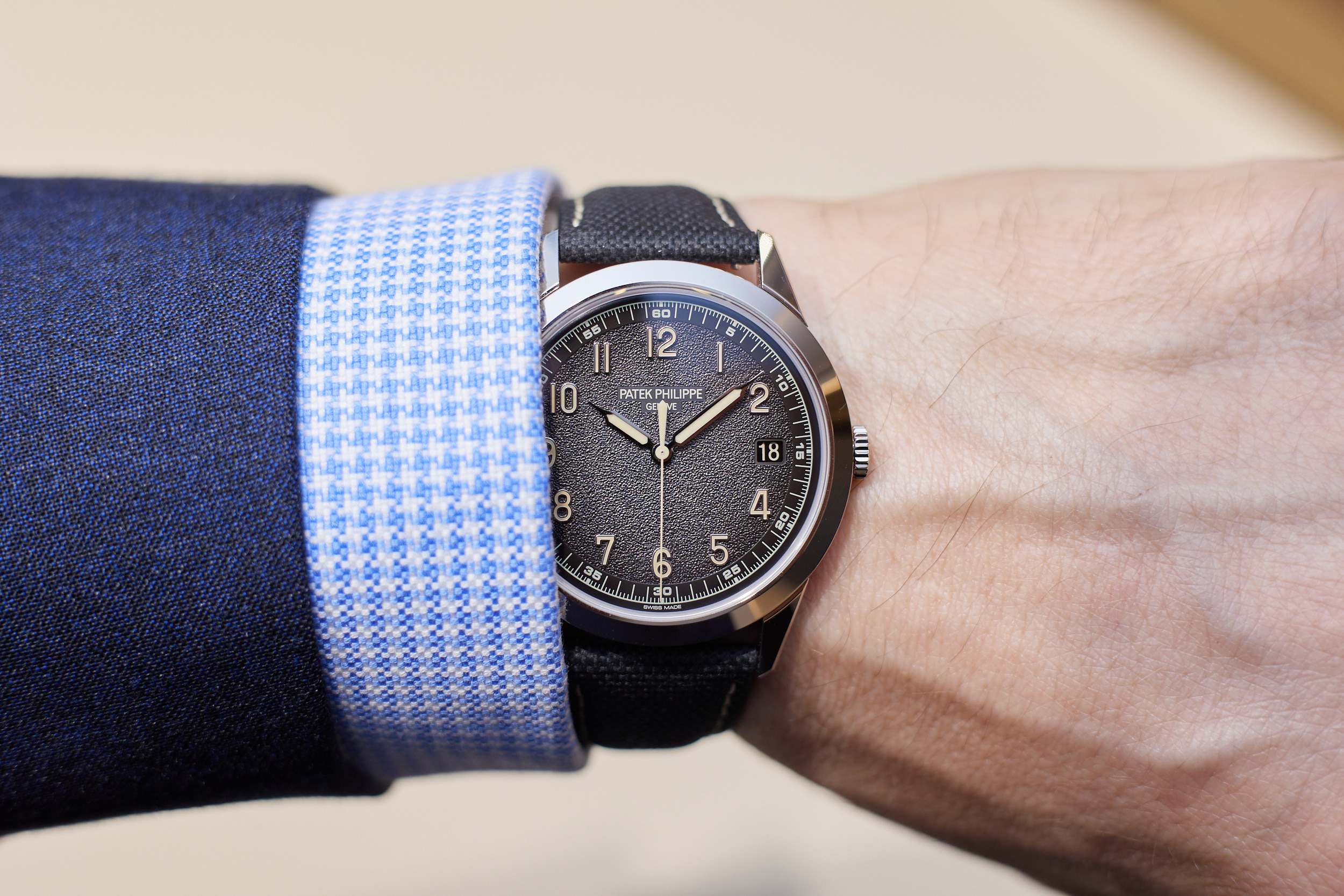 When I first saw Patek Philippe’s crystal cube booth I had to take a glimpse at the surroundings to reaffirm where I am. We were used to this sight in a different city and a different hall. With the new in-person edition of Watches and Wonders influential newcomers have arrived, including Patek Philippe. The booth radiates exclusivity – just to get to the reception, you need to get to a pre-reception area. 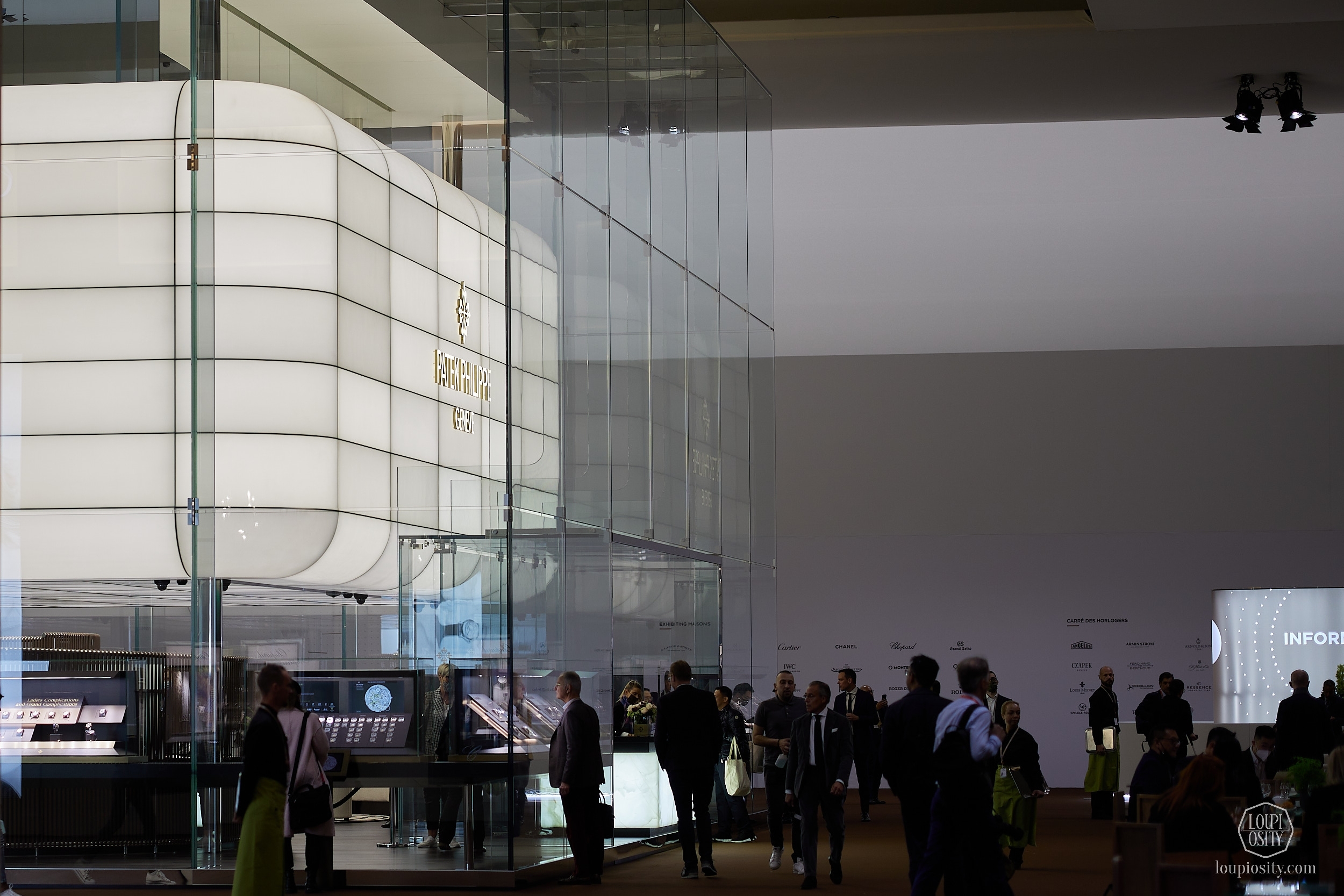 The manufacture presented 12 novelties ranging from the time-only quartz to the gem-set perpetual calendar minute repeater. But even when you enter Wonderland (like a child stepping into a giant toy store), there will be a first love you are reaching out for. For me, this was the casual and effortlessly stylish time and date Calatrava 5226G and its sibling the Calatrava 5326G with an annual calendar and travel time function. Let me introduce them to you with a selection of other novelties.

Patek Philippe has been using the Clous de Paris or hobnail pattern on the bezel of Calatrava models since 1934. The motif became iconic with the successes of the 1985 Calatrava ref. 3919 (33.5mm, manual calibre 215 PS), which helped Patek Philippe to recover from the quartz crisis. The hobnail has been constantly available in the Calatrava portfolio ever since. The newest addition to the ‘bankers watch’ style (as the ref. 3919 was nicknamed) was 2021’s novelty ref. 6119 on a somewhat larger 39mm diameter and the Calibre 30‑255 PS inside. Just like before, the tiny pyramids appeared in an endless circle around the bezel.

The new Calatrava 5226G is immediately a Calatrava and also it is not. It is as sophisticated as the other family members, but while the rest are pure and elegant, this radiates tremendous coolness. There is no single characteristic that is responsible for this X-factor, rather a mixture of attributes (very well balanced with the DNA of the collection) define its personality. 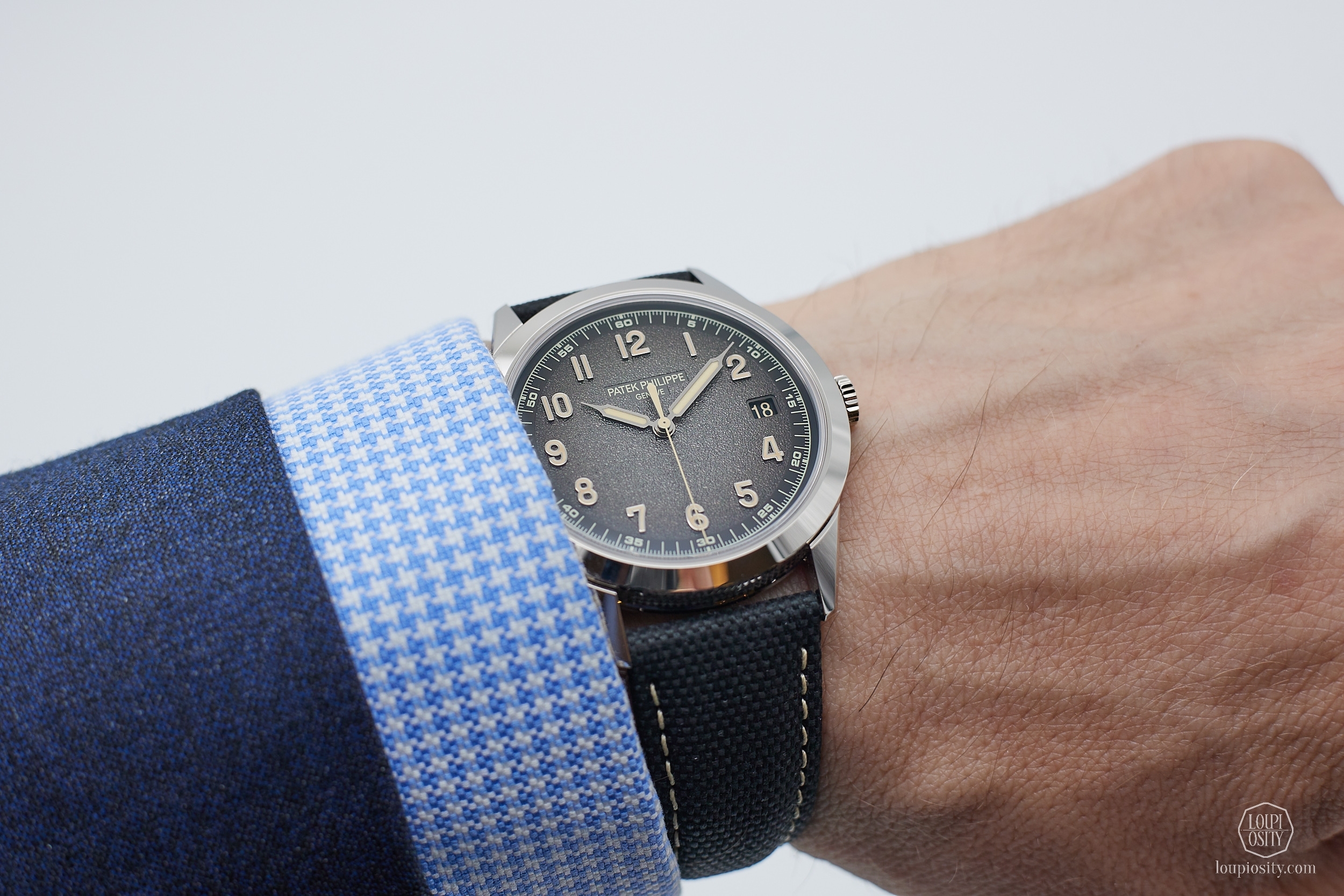 Let’s start with the Clous de Paris pattern, which appears this time on the 40mm white gold case band in three rows. What’s more, true to its predecessors, it runs in an uninterrupted circle. The lugs are actually attached to the case-back allowing a small gap between the case and the lugs and therefore the hobnail motif can continue behind the lugs. The impact is even greater as the pattern is surrounded by polished and inclined surfaces such as the lugs and the slightly chamfered wider bezel. 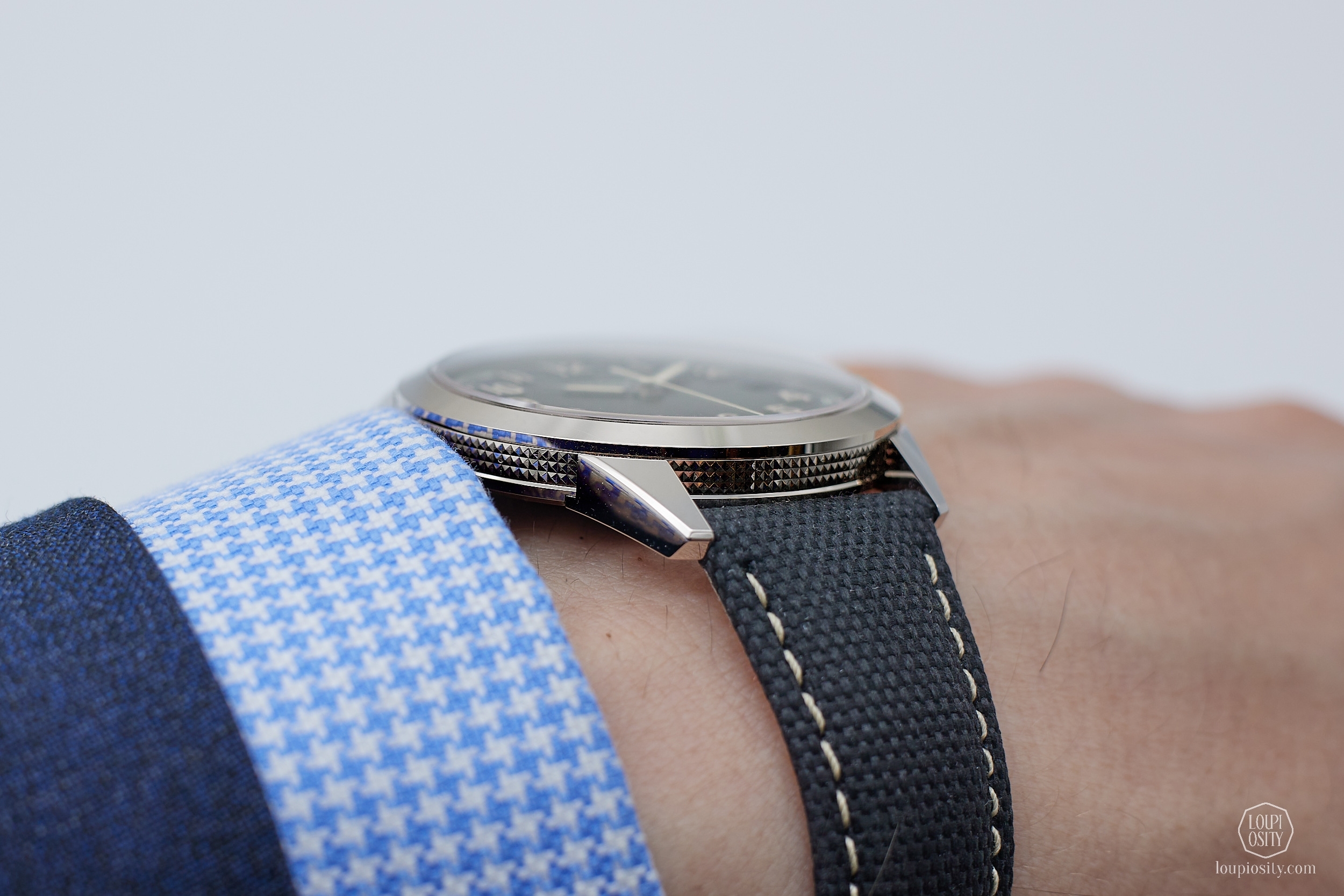 The dial is the second conspicuous phenomenon. Patek Philippe says that the inspiration for this textured charcoal grey and black gradient surface was the grip of the older cameras. The grey has a warm hue, which is complemented with golden Arabic numerals and beige luminescent coating. The gradient rough surface ends in a flat black ring, where a beige minute track is situated. The same black-beige combo is repeated in the date aperture.

The hands stand out from the circle of dauphine and spade-handed Calatravas. Matching perfectly to the more sporty case and dial, the watchmakers added syringe-style hour and minute hands made from 18k gold and the same beige luminescent coating. The seconds hand is lacquered beige.

I love the unity of these design components combined with the simple time and date function, which allows for a very slender shape. From the great and even better novelties of Patek Philippe, the ref. 5226G remains my top favourite even after multiple run ups.

The bigger brother is the 5326G proudly presenting an annual calendar and a travel time function. Due to the added complexity, the Calibre 31‑260 PS QA LU FUS 24H is bigger than the previous one (33mm diameter and 5.6mm height) and therefore the case is slightly larger: 41mm in diameter and 11.07mm in height. This means a wider case flank and five circles of Clous de Paris guilloched decoration. Similarly, they run behind the lugs and only the crown and the four recessed date corrector pushers break its flow. The four buttons are: 2 o’clock month corrector, date at 4, moon phases at 8 and the day of the week at 10 o’clock. The crown has three positions: you wind it by default; pulled out once, you can set the local time in one hour increments; pulled out completely, you can set the home time. 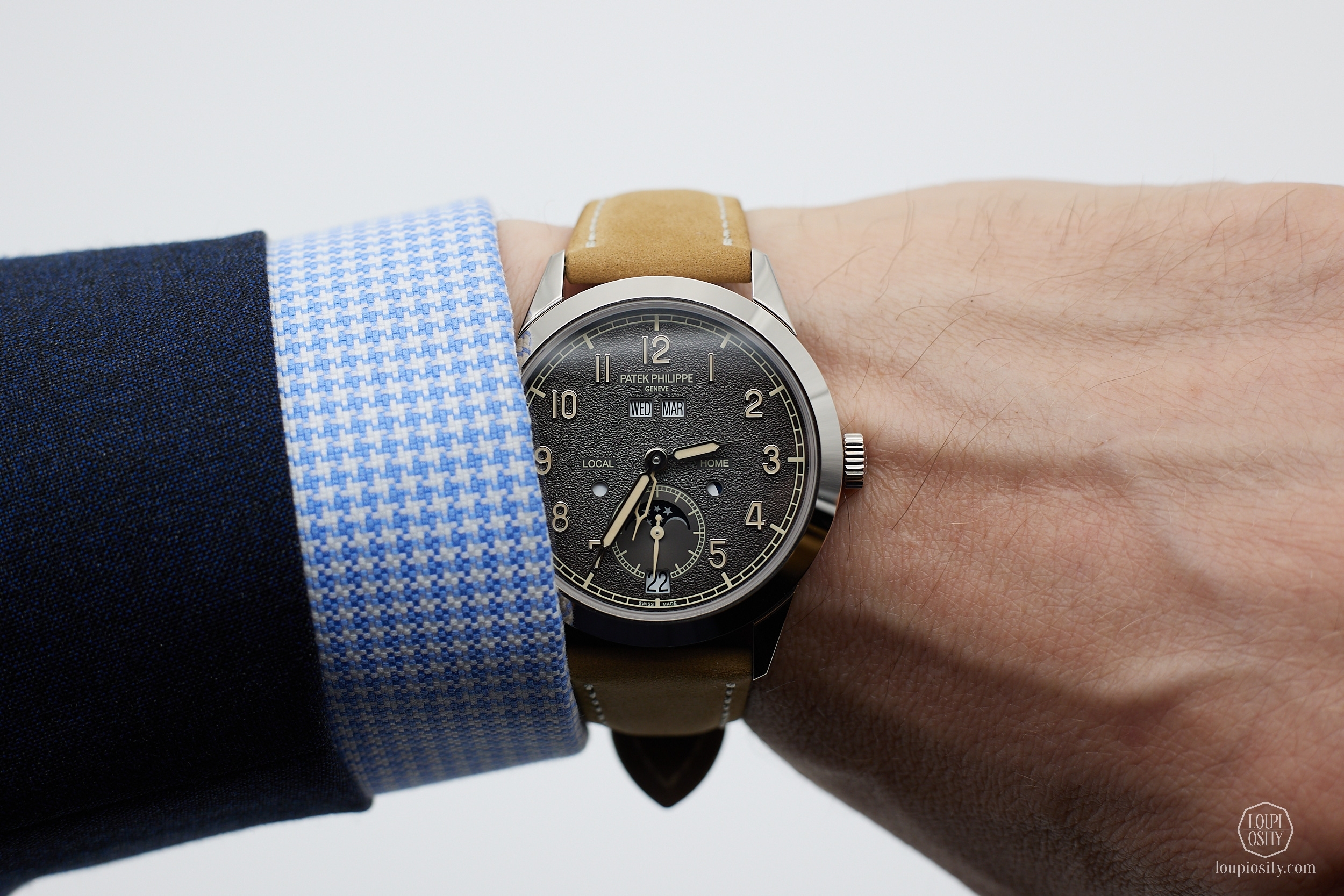 The face has the same textured charcoal grey-black gradient with a few more apertures and indications. The day of the week and the month are situated at 12 o’clock. The date is at 6 o’clock just like the moon phases and the small second. The home time hour hand is skeletonized and is executed in the same syringe-style. In order to keep its spirit but balance out the number of added indications, designers decided to simplify the minutes numerals and chose a railway-track minute scale.

The automatic Calibre 31‑260 PS QA LU FUS 24H consists of 409 parts including an off-centred platinum mini rotor and beautiful bridges, all of which can be observed on the case-back. The mainspring stores energy for 38-48 hours when fully wound. 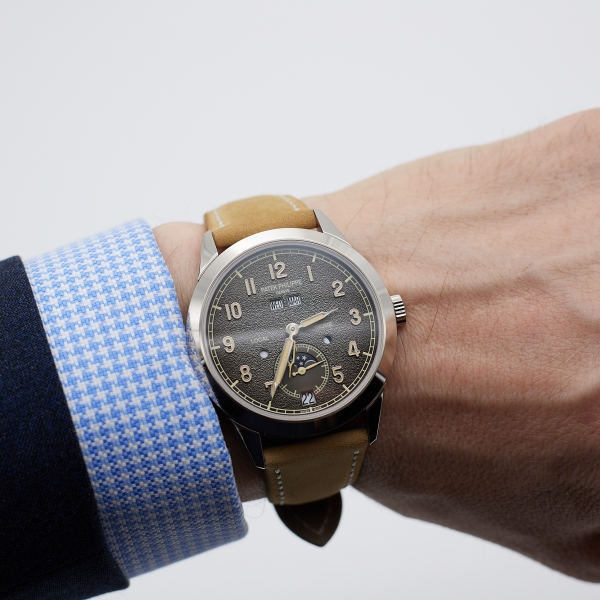 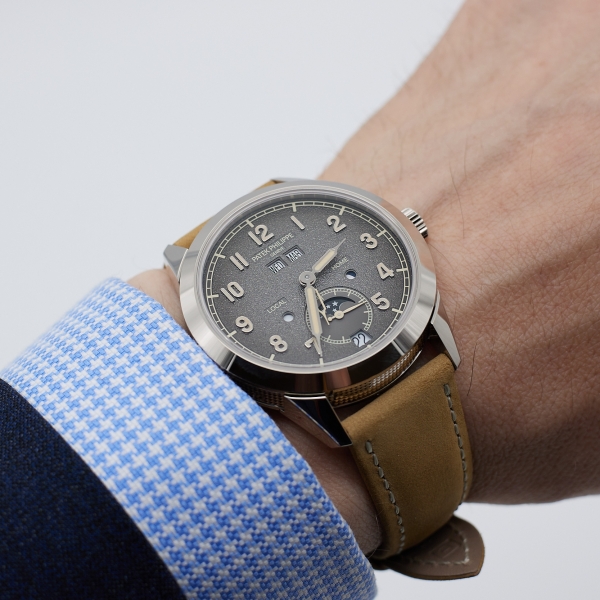 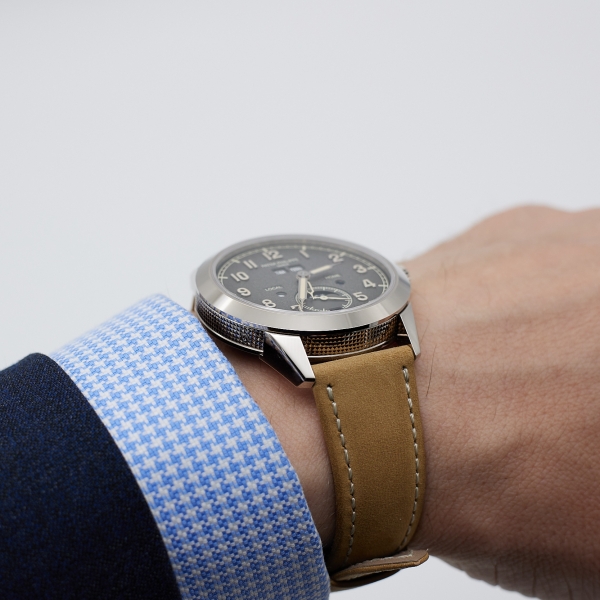 Dark green has been a colour of multiple Patek Philippe novelties this year. Coupling it with a rose gold case lends a completely new look to the ref. 5205 launched in 2010. The colour is actually a green-black gradient getting darker around the rim. The beautiful rose gold accents stand out visually from this dark background. The sub-dial at 6 o’clock shows the moon phases and hours in a 24 hour scale. The signature annual calendar apertures of the ref. 5205 get tremendous emphasis. The lugs are skeletonized and their shape continues in the case as a hollowed negative. 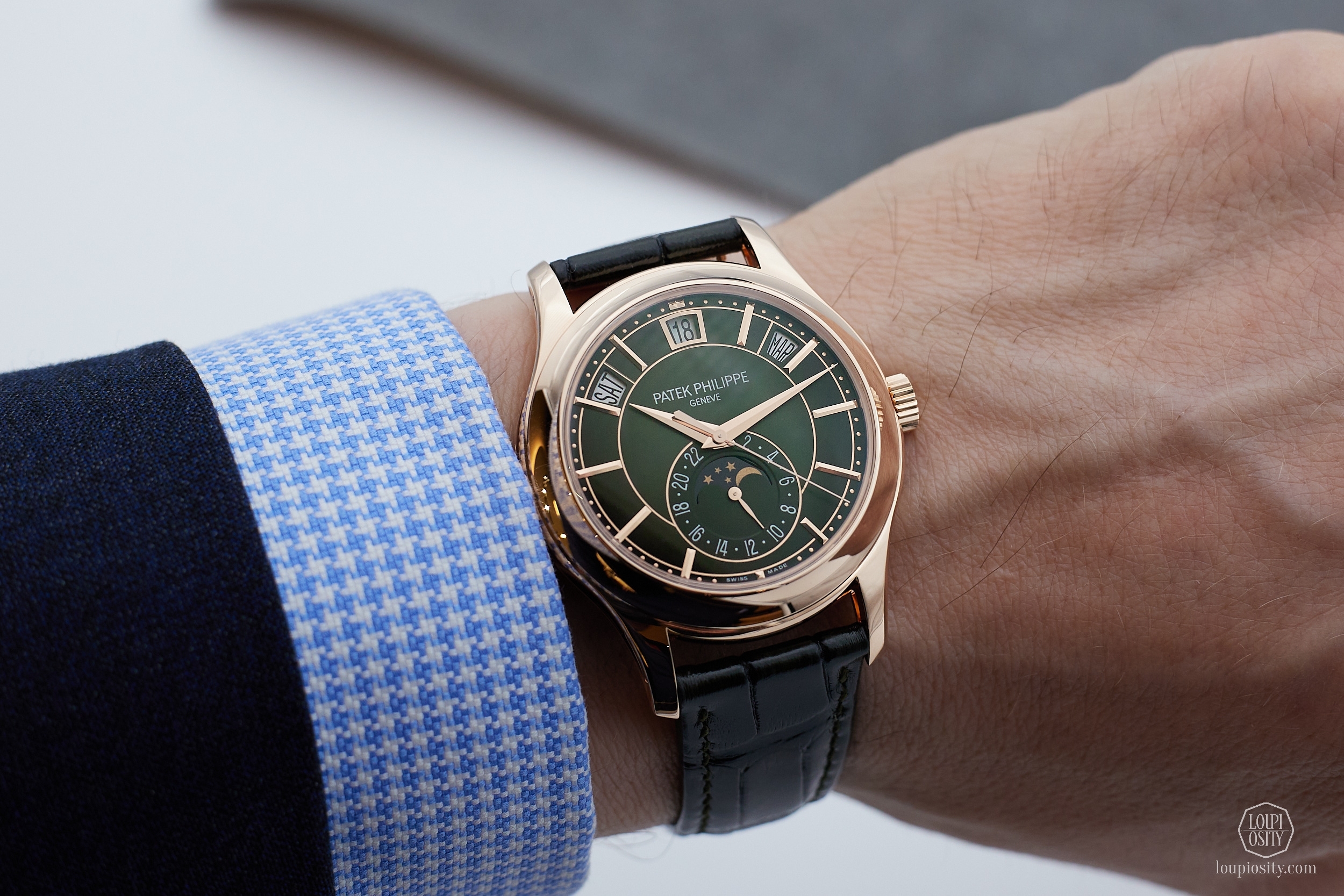 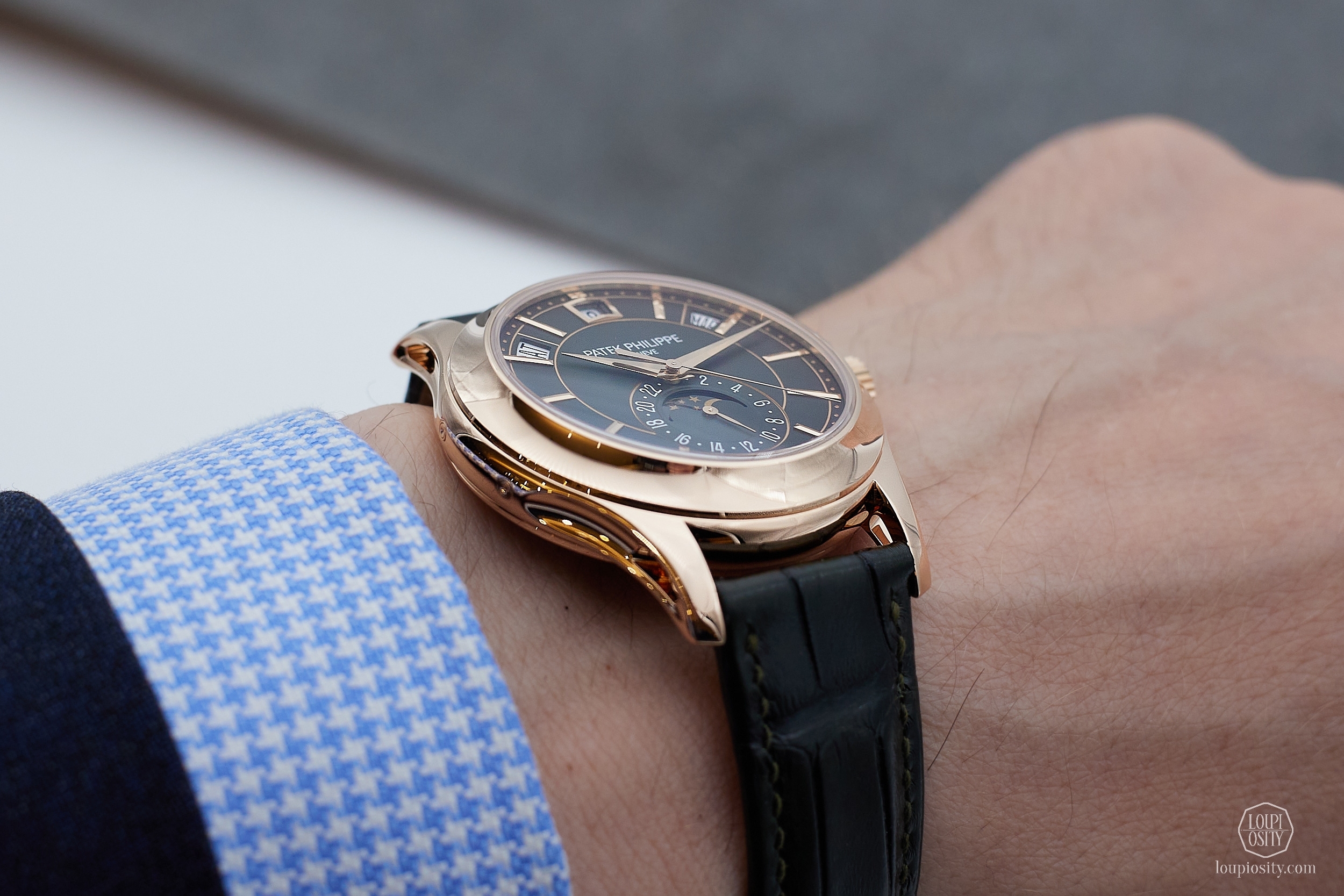 In the early 1940s, Patek Philippe designed a calendar display layout that can be naturally read. Day of the week and month are in a twin rectangular aperture at 12 o’clock and date and moon phase in the second sub-dial at 6 o’clock. Take a look at these early Ref. 2497 examples from 1951 and 1954 auctioned in 2017.

Introduced in 2017 the Ref. 5320 followed the same display setup. In 2022, Patek Philippe introduced a rose-gilt opaline dial version in white gold case with charcoal grey gold applied numerals with luminescent coating. In addition to the displays of the aforementioned predecessors, the 5320 has two small round apertures on both sides of the sub-dial. The one between 7 and 8 o’clock is a day/night indicator. The other between 4 and 5 o’clock is a leap year display.

The Calibre 324 S Q is a 4 Hz automatic movement with a power reserve of 45 hours. 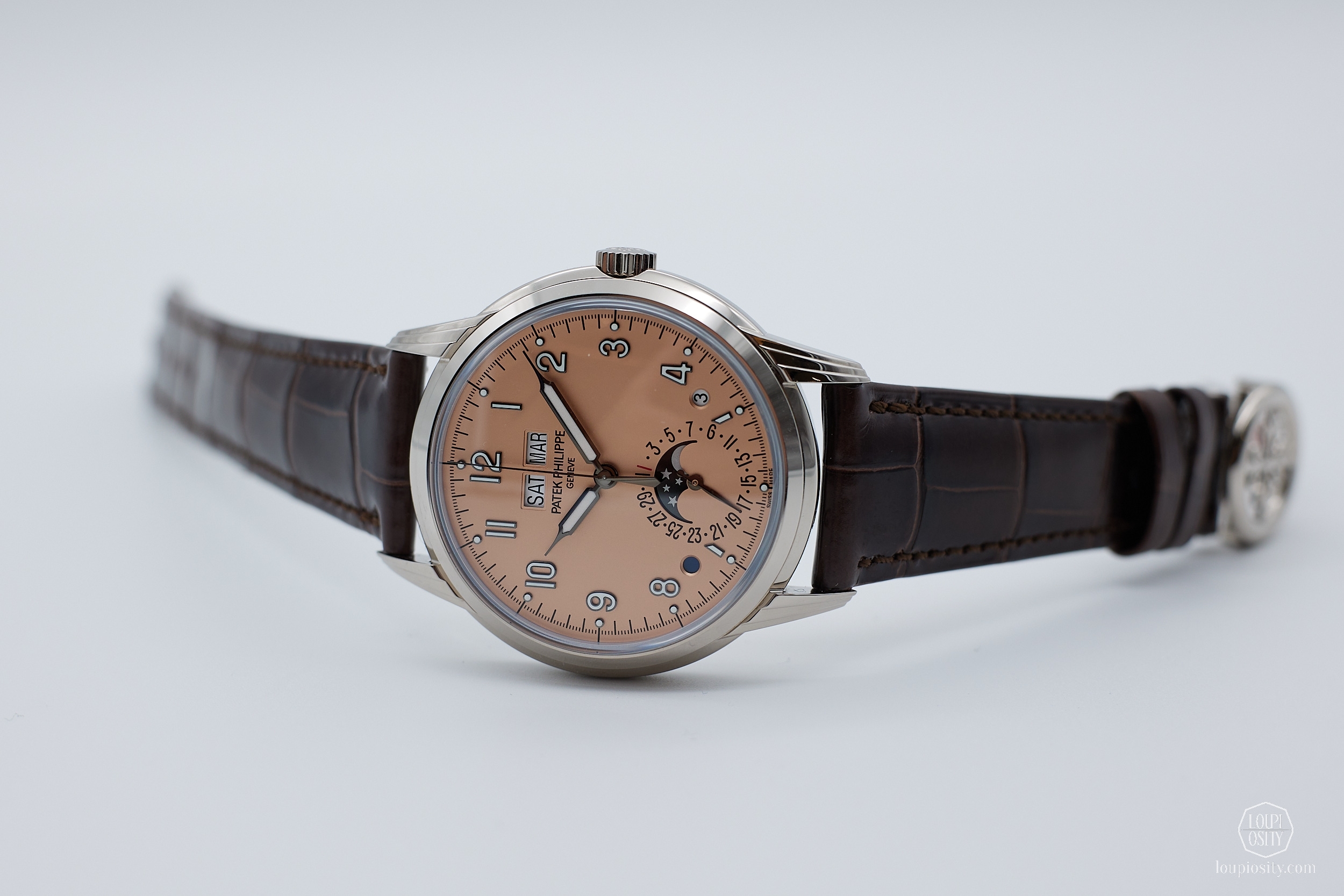 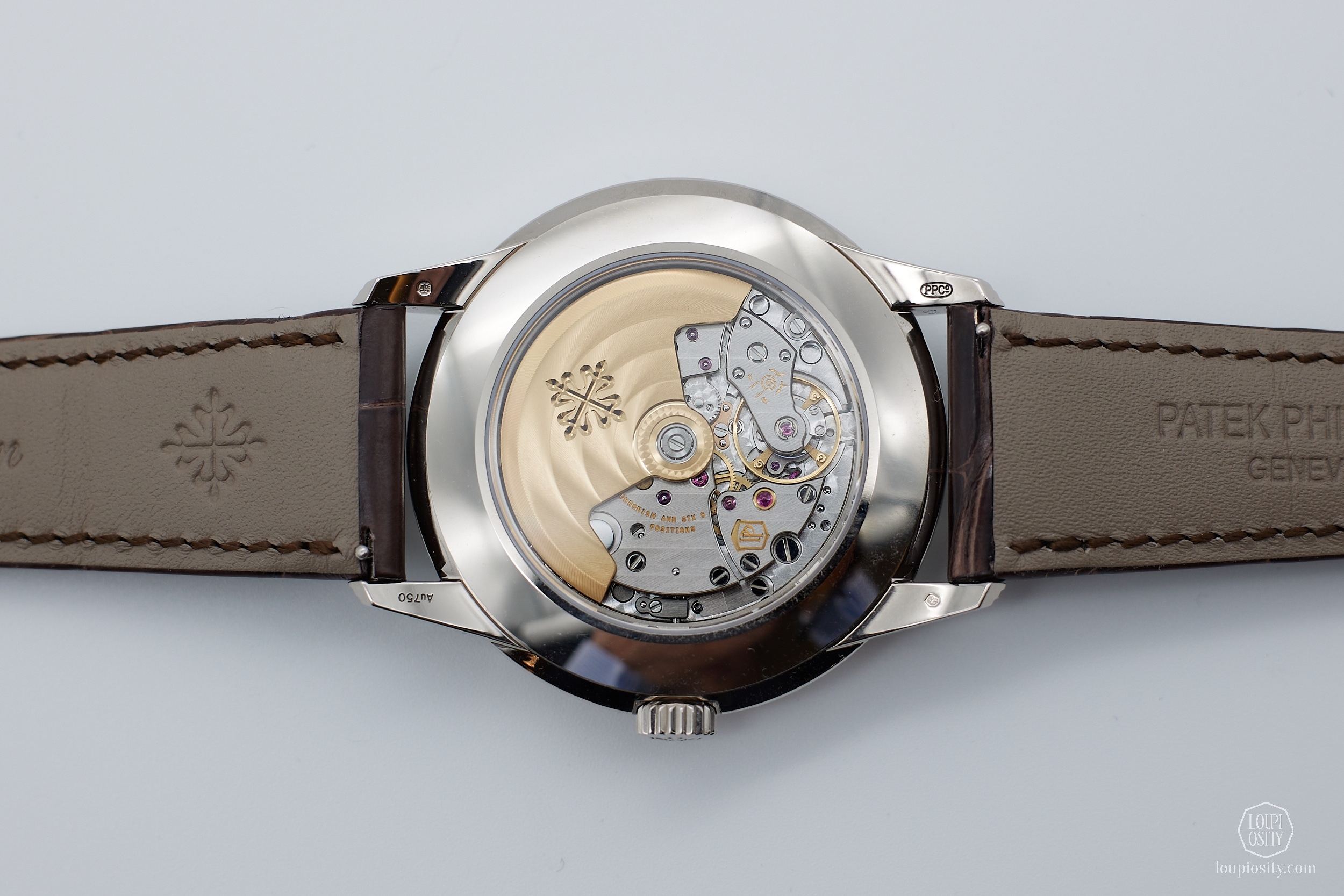 Only Watch 2019 at Christie's Following the preview of the one-off dedicated pieces of participating brands from 7-9 November, the 8th edition of the biannual Only Watch charity auction is about to begin at the Four Seasons’ Hôtel des Bergues in Geneva.Girls don’t just wanna have fun – Part 19 In this series we showcase mechanical and artistic wonders that were especially designed for women and others originally for men that come alive on spirited ladies’ wrists. The Phillips Geneva Watch Auction X line up a number of instantly loveable pieces. We browsed the lots at the preview and selected a few.Vacheron Constantin Historiques 222 Vacheron Constantin's Historiques collection is now enriched by the 222, a contemporary re-edition of the Maison’s iconic 1977 ‘Jumbo’. We saw the novelty at Watches and Wonders 2022.