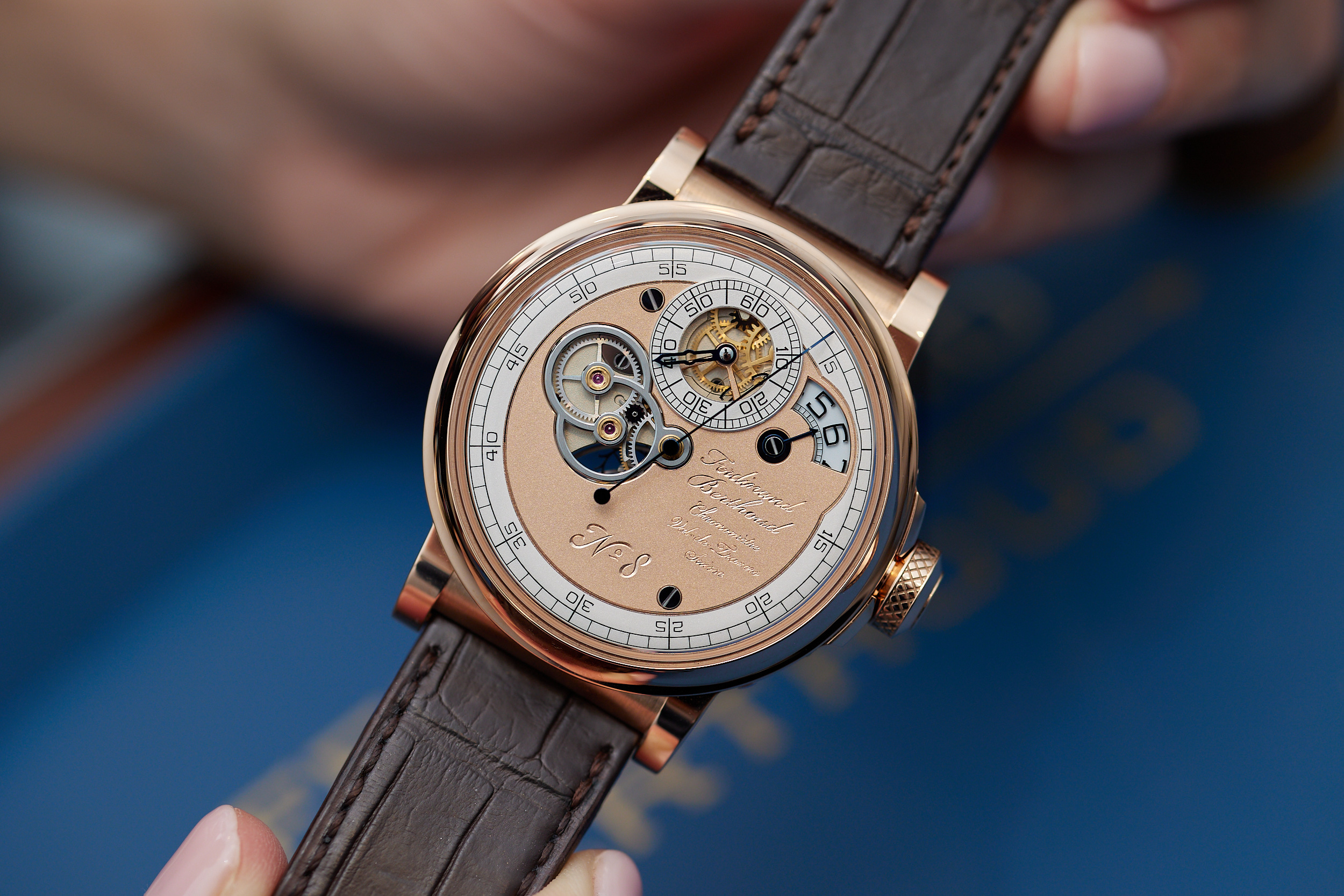 Inspired by the Marine Clock No.8 that earned Ferdinand Berthoud the royal warrant in 1770, the manufacture introduced the Chronomètre FB RSM this Spring. The highly precise movement includes a deadbeat seconds and a stop-seconds mechanism.

Ferdinand Berthoud lived during the race for controlling the oceans and remote lands. Navigation in open waters lacked the exact determination of longitude, which would have required the precise measurement of time at a reference location. He and his contemporaries had eagerly worked on creating marine chronographs that not only prove themselves in a reasonably calm terrestrial environment, but operate accurately and reliably for months (if not years) out in the rough waters. Berthoud created a number of models and the successes of his Marine Clock #8 earned him the title of Horloger mécanicien du Roi et de la Marine (Watchmaker-Mechanic by appointment to the King and Navy) in 1770. His story is pretty fascinating, you can read more about it here.

As a master watchmaker and inventor, he put an emphasis on distilling and handing over his accumulated knowledge. He included articles about the equation of time and solar cycle measuring clocks in Denis Diderot’s and Le Rond d’Alembert famous Encyclopédie. He also published an Essay on Horology about the civil use of these instruments. On the more hands-on practical side, Berthoud employed apprentices as it was accustomed at the time to teach and involve them in the creation of some of his most important pieces.

Manufacture Ferdinand Berthoud embarked on developing its new model in the same spirit. They commissioned a young apprentice to research deadbeat seconds mechanisms and patents and work out the mechanism that can be integrated into the Calibre FB-T.FC.RSM in collaboration with the master watchmakers of the house. 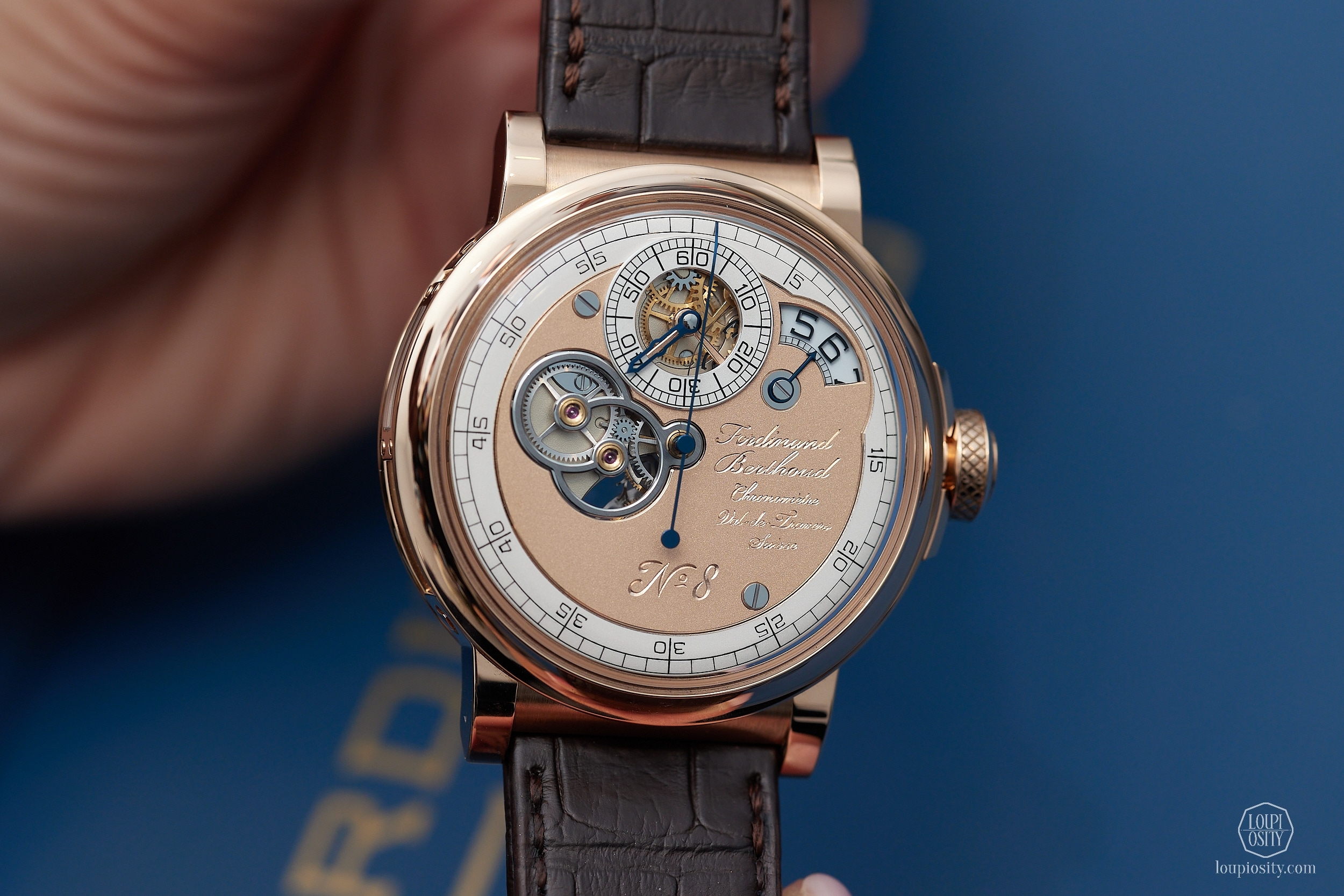 The signature fusee-and-chain mechanism of Ferdinand Berthoud provides ‘constant force’ distribution of the stored energy to the tourbillon with direct-drive seconds.

By employing the deadbeat seconds mechanism, the torque gets accumulated by a small spring making the gear train stop until it gets released exactly 1 second later. This makes the second hand jump in 60 discrete positions a minute. Additionally, a device to stop the balance enables the tourbillon to be stopped when setting the time to the exact second. Of course, the manufacture put great emphasis on getting the mechanisms perfect, so all timepieces would be COSC certified.

The timepiece was presented at the Watches and Wonders fair. Like always, the second hand received the centre stage jumping second-to-second instantly. Hours are indicated in a quarter ring aperture at 2 o’clock, while minutes can be read from the skeletonized hand sweeping above the opening at 12 o’clock. The deadbeat mechanism can be observed in the 8 shaped opening in the front as well as in the back. The dial is made of 18k frosted gold and is fitted into the 44mm rose gold case. The piece is also available with a grey dial and with blue tones and a white gold case.

As usual, Ferdinand Berthoud is limiting the number of movements produced (20 pieces for the Calibre FB-T.FC.RSM) giving the option to collectors to select the metal, the dial colours or even the octagonal case. 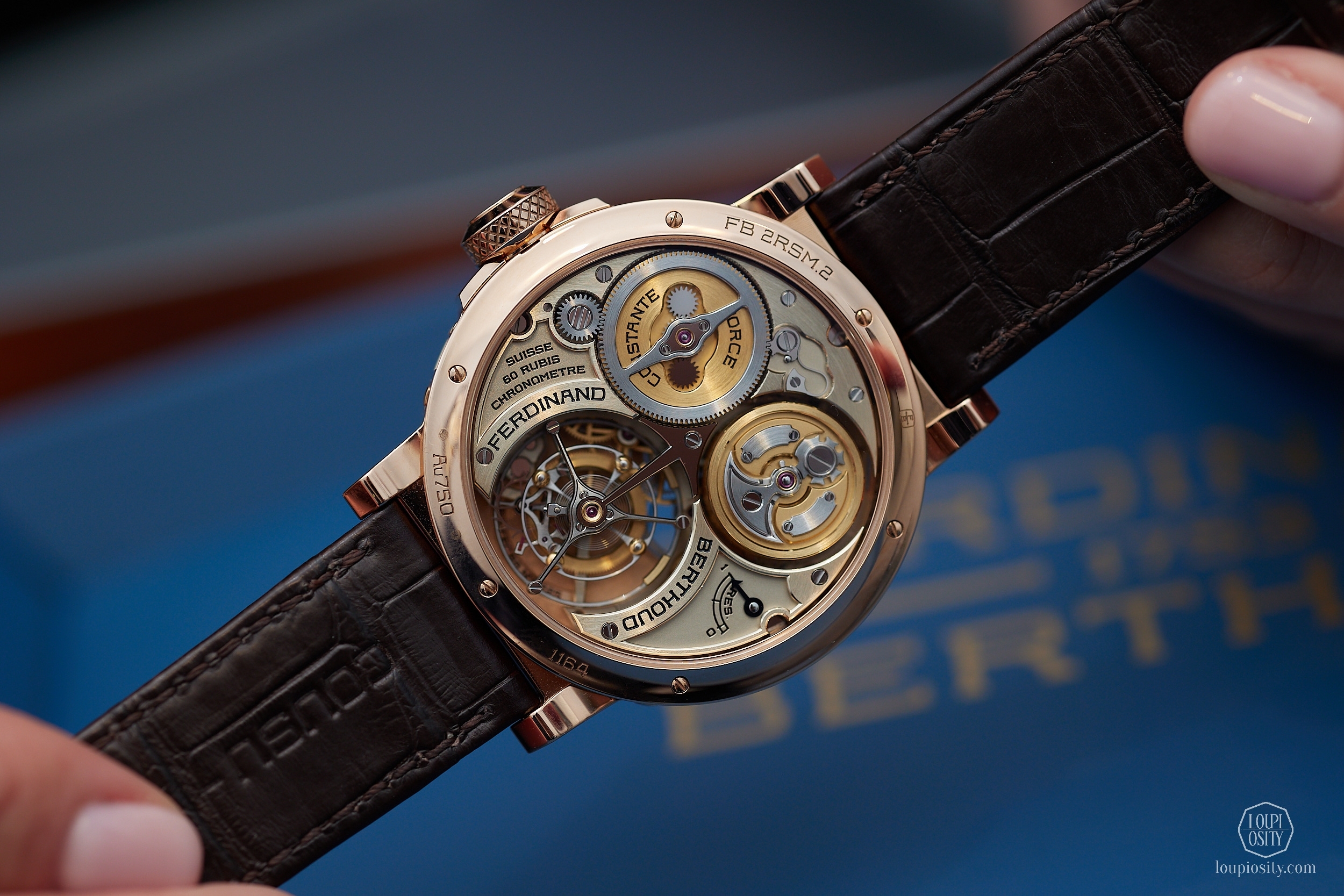 Ferdinand Berthoud Chronomètre FB 3SPC This October, Chronométrie Ferdinand Berthoud presents a new model inspired by a historic civil timekeeper of the French post-revolutionary period. The beautiful Chronomètre FB 3SPC forms the third pillar of the brand’s collections.Independents at the Dubai Watch Week 2021 Under the sunny Dubai sky and the arch of the DIFC Gate Building independent watch brands showcased their special pieces in a great atmosphere. The Brands’ Exhibition hall was bright with smiles and loud from the chit-chat while a number of astonishing models wandered from wrist to wrist. Below are a few exceptional creations by independents.URWERK - Geneva Watch Days For the Geneva Watch Days, URWERK set up in a beautiful suite with a lakeside view at the Beau-Rivage to introduce their latest novelties. We saw the unique UR-T8 Raptor piece and the EMC Time Hunter Desert Sage.