Greubel Forsey recently revealed their latest project the ‘Renaissance d’une Montre’ which will be instituted in 2023 and which is destined to provide some of their timepieces with a second life. Beside the introduction of this project the manufacture brought a new timepiece to the Dubai Watch Week – the Balancier S2.

One of the most recognisable and super high-end watch brands, Greubel Forsey, was founded by Robert Greubel and Stephen Forsey. It was launched at Baselworld in 2004 with the announcement of their Double Tourbillon 30° – an invention they had already been working on together for 5 years. Ever since, the two gentlemen with their talented team have been working on unconventional fine watchmaking creations, highly appreciated by collectors. Alongside a few other – mostly independent – watch houses they have always been a kind of a league of their own.

Around 2012 Robert Greubel and Stephen Forsey initiated the ‘Naissance d’une Montre’ project together with Philippe Dufour (one of the most eminent contemporary watchmakers) and Michel Boulanger (a watchmaking teacher from the Diderot vocational training college in Paris) to revisit the forgotten watchmaking tools and techniques.

‘We are really afraid that one day we’ll just stare at these tools and there’ll be no one who can work them. This situation is rather fragile; may anything happen to these people it could mean the total disappearance of centuries old knowledge.” – explained Stephen Forsey back then why they had started this project – ‘Our goal was to record the traditional watchmaking techniques by involving someone, who could convey this knowledge to the next generations.’

Michel designed and created the initial watch entirely by hand. The prototype he made was auctioned by Christies in Hong Kong in May 2016 for USD 1.5m. (See more about the ‘Naissance d’une Montre’ here.)

In 2020 Antonio Calce (former CEO of Corum and Girard-Perregaux) joined Greubel Forsey – first as a consultant to Robert Greubel before being appointed Chief Executive Officer (succeeding Fabrice Deschanel) and Executive Board Member, which was announced in December 2021.

‘Our Atelier is evolving constantly and rapidly. Our timepieces are now more advanced than ever in terms of precision, reliability and innovation. However, our clients are intimately attached to some of the early Greubel Forsey timepieces in their collections. How can we preserve the soul of these timepieces while providing them with the very best of our current know-how?’ – Antonio Calce is dedicated to answer his own question with an innovative program – a first in the history of Haute Horlogerie.

The owners of certain Greubel Forsey timepieces will soon be able to contact the manufacture to request changes to the exterior parts and even the movement of their watch, in order to provide it with a new aesthetic or new functions and indications. The program will be fully operational from January 2023, once the different possibilities offered by each movement have been analysed – an amazing feat, as there are about 30,000 individual component references.

Aptly communicated just before the Dubai Watch Week 2021, I’m pretty sure that many fine watchmaking aficionados and hard-core collectors will be keen to learn more about the concept at this event too.

Greubel Forsey is already unveiling some of them: the Balancier Contemporain could be equipped with a second time zone, an inclined escapement, or even with a tourbillon instead of a balance wheel. The GMT, which already displays local time, a second time zone and universal time by its globe and cities disk, could be equipped with a further time zone display coaxial to the hours and minutes hands. Below you can see the original Balancier Contemporain for example – the owner will be able to work in close collaboration with the brand on his or her timepiece. 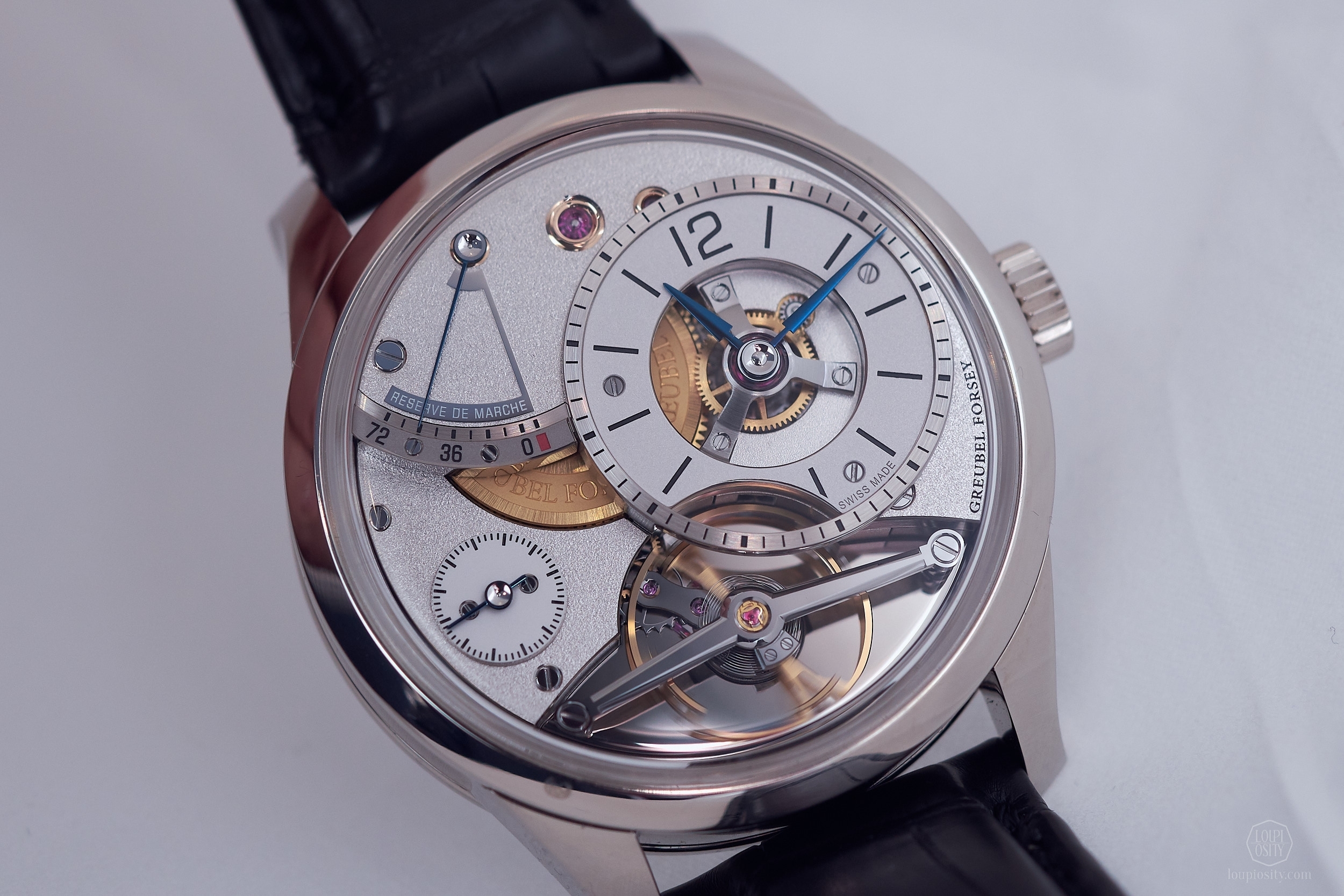 During the pandemic-defined 2020 Greubel Forsey presented the Balancier S, a timepiece featuring a large, high precision and inclined balance wheel within a water-resistant titanium case. I had the chance to sit down virtually with Stephen Forsey – please learn about it more here.

The new Balancier S2 by Greubel Forsey made its entrance onto the watchmaking stage on 27 November 2021 in the middle of the Dubai Watch Week at the Cipriani restaurant. The new timepiece accentuates the contemporary look of the Balancier S and the strong, ‘sporty’ appearance of the GMT Sport. It shares the movement of the Balancier S but introduces a different case, finishing and design codes. 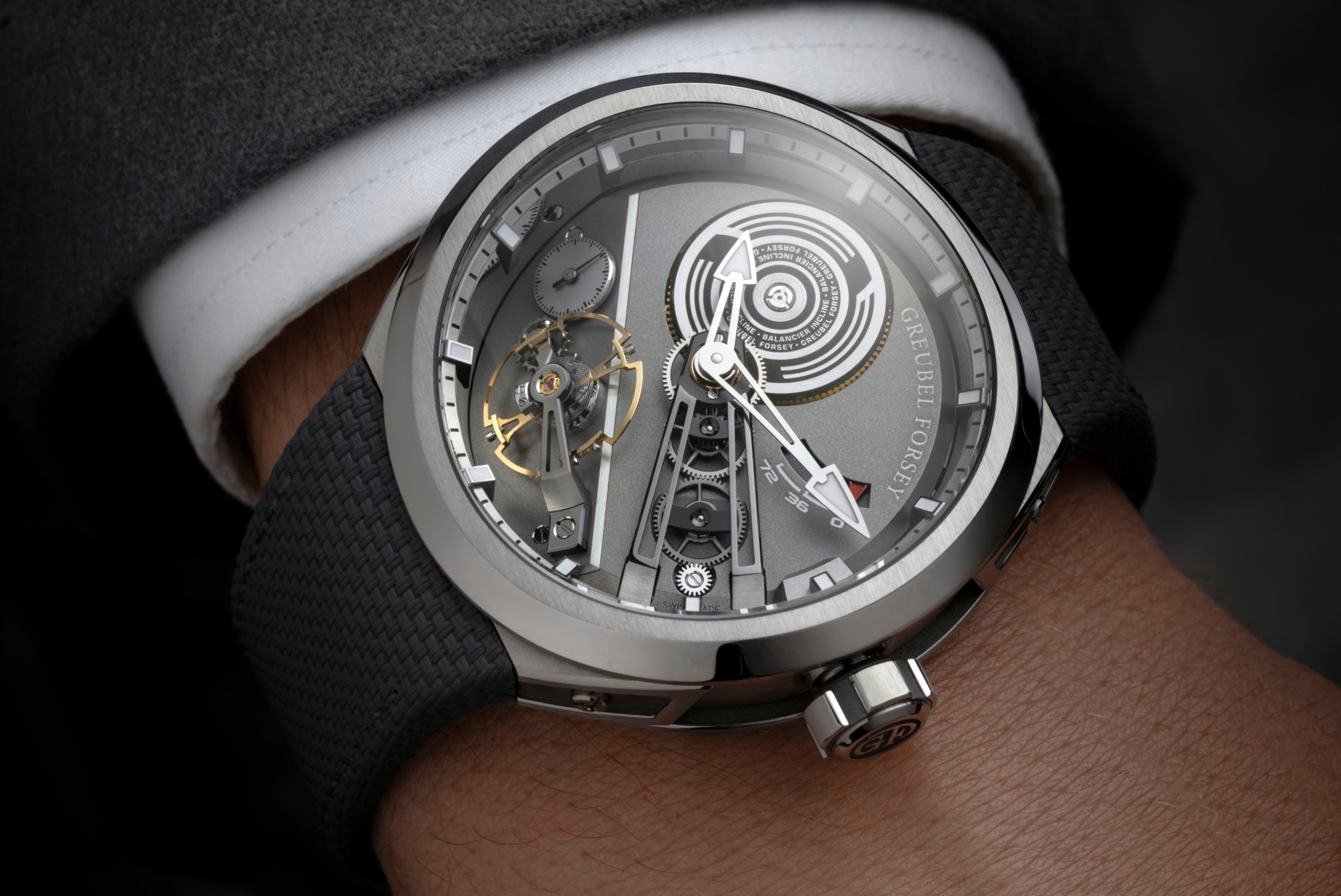 The Balancier S2 has a 46.5mm titanium case, titanium bezel with polished flanks and – for the first time – an openworked central double-arched titanium bridge. Its dial has luminescent white hour and minute hands suspended above and features an intense black or grey backdrop that cuts through the balance bridge between 5 and 9 o’clock.

The charcoal grey backdrop version will be limited to 88 pieces and of the model with a light grey background 16 pieces per year will be released over 4 years (2022-2025), totalling 64 pieces.

As this summer Greubel Forsey announced that it will completely eliminate animal leather from its straps, the latest watch has a rubber strap or on demand the client can have a 3-row titanium bracelet. 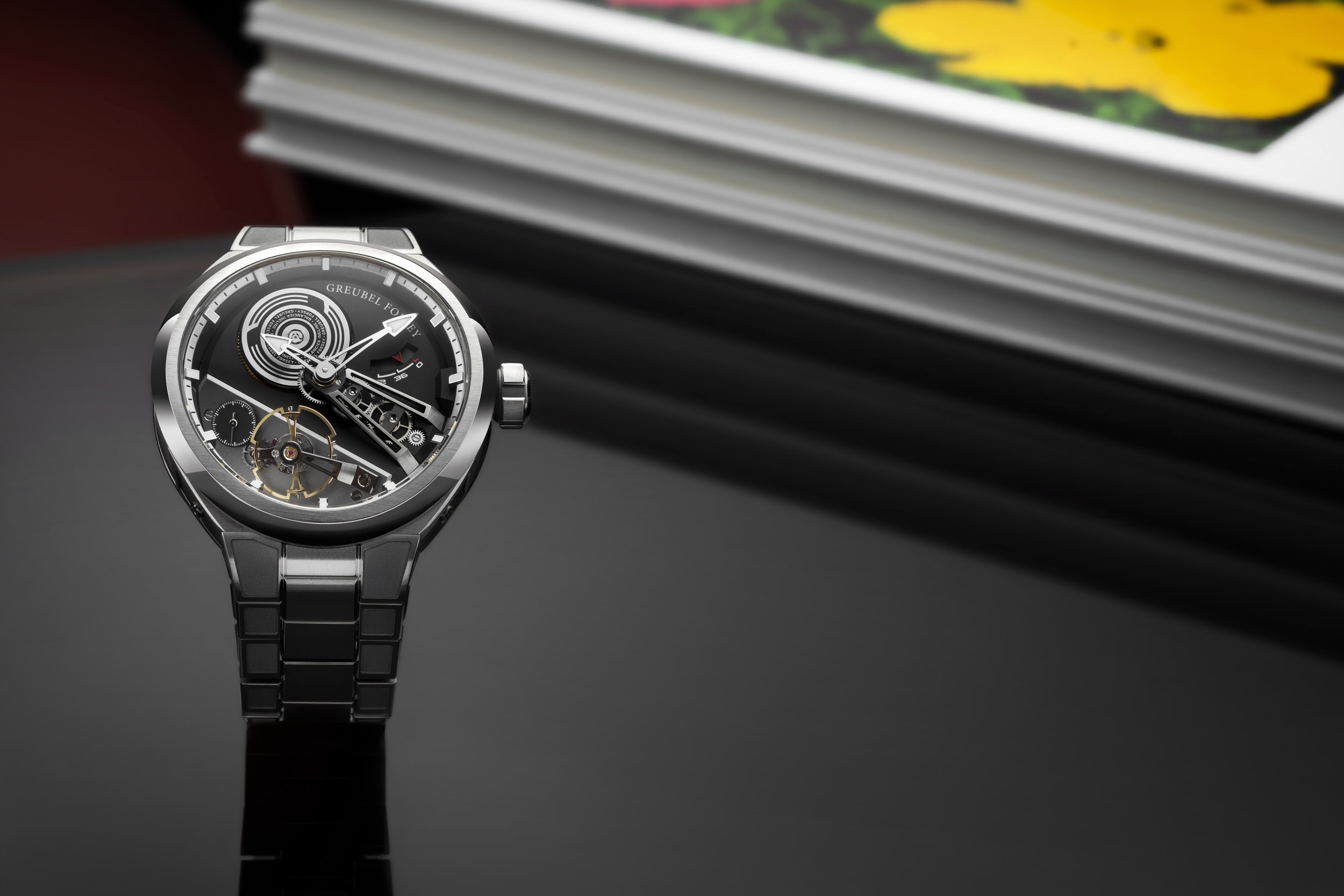 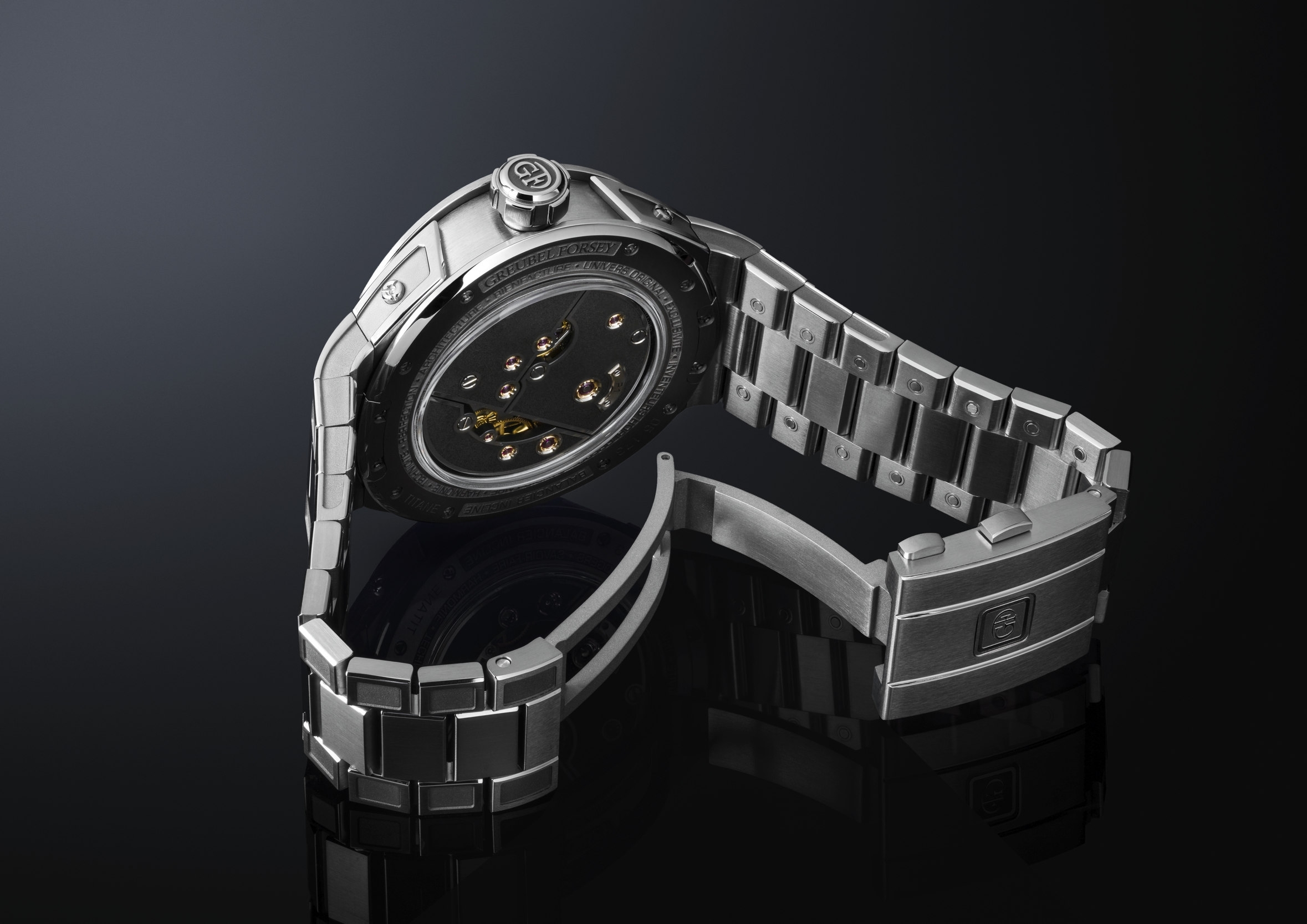