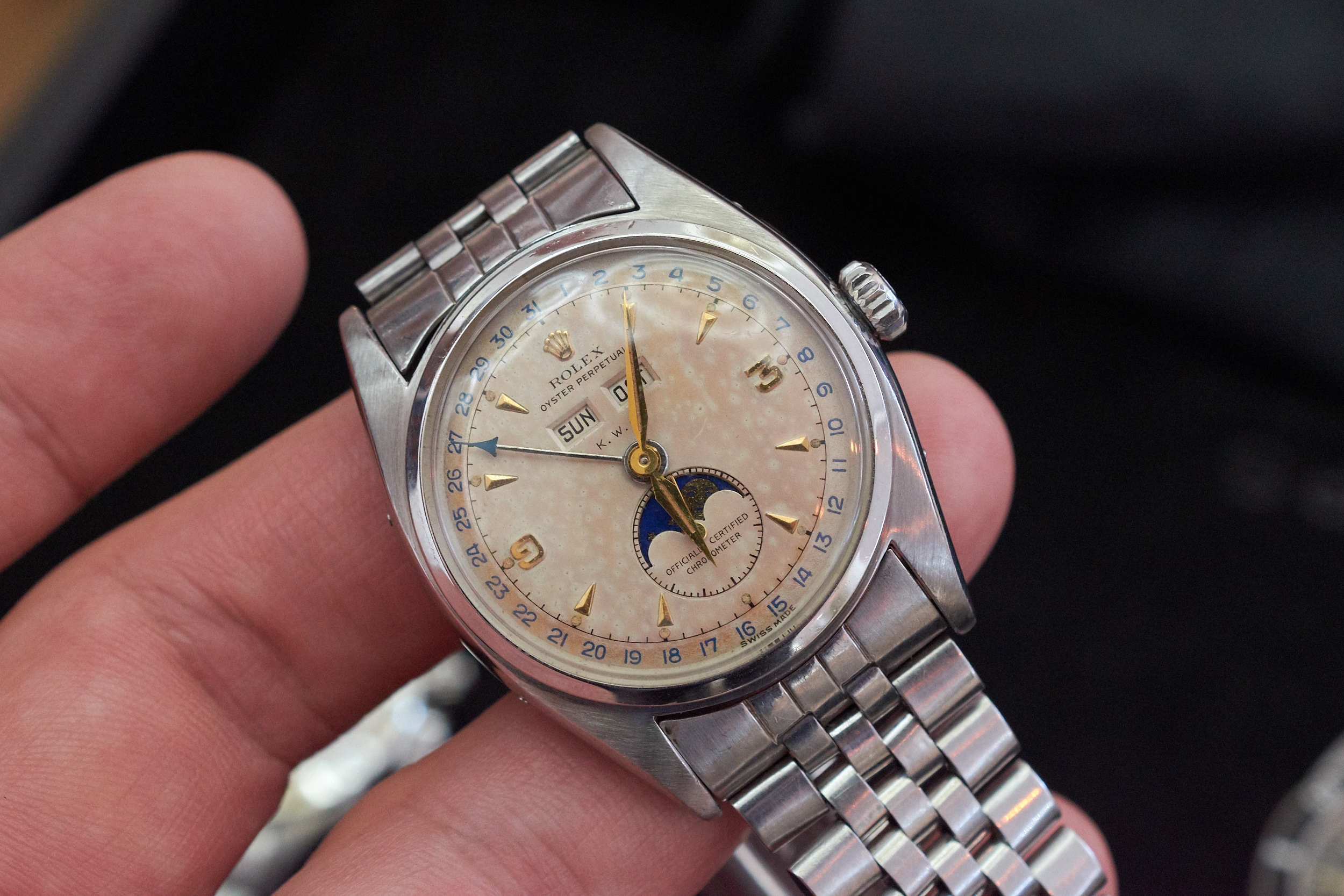 Phillips Geneva Watch Auction: XIV will be held on 5 and 7 November in Geneva. There will be  two sales events on the two days with very interesting haute horlogerie rarities.

In this article, we include a tiny selection from the 250 examples being offered at the GWAXIV at the Hôtel La Réserve in Geneva. The sales offers highlights, like the five spectacular F.P. Journe ‘Souscription’ watches (each numbered #1 & reunited for the first time ever) or a set of four Philippe Dufour watches.

In 1956, the Oyster Perpetual Day-Date made its debut. It was the first wristwatch to display the date and day of the week. These models are available in 950 platinum or 18k gold created in Rolex’s own foundry. Nicknamed as the ‘Presidents’ watch’, ‘Rolex President’ or even ‘El Presidente’, the watch has been the choice for many of the world’s important figures.

The Day-Date has seen a great variety of dials, watch cases and bracelets. One of these examples is the so-called Stella dial, produced for a short period during the 1970s. Other models received extensive gem-setting decoration on the dial or on the bezel.

Lot 114 from circa 1987 is one of the first ‘Rainbow’ models Rolex ever made, probably even before Rolex even used the model name. It has a 36mm 18k yellow gold case with a yellow gold President bracelet. Its bezel is set with sapphires that graduate in hue to reflect the colour spectrum. The tones range from a vibrant and intense deep red, that changes to orange and yellow hues then green, blue and finally deep purple. The gold dial also displays gemstones in a rainbow hue, referencing the colours of the bezel.

Rolex has a facility in Chêne-Bourg (a municipality in the Canton of Geneva, Switzerland) devoted to gem-setting and dial decorations with eminently high standards in these as well. The company owns a gemmology laboratory – so no wonder that all the gem-set Rolex timepieces are exquisitely made. 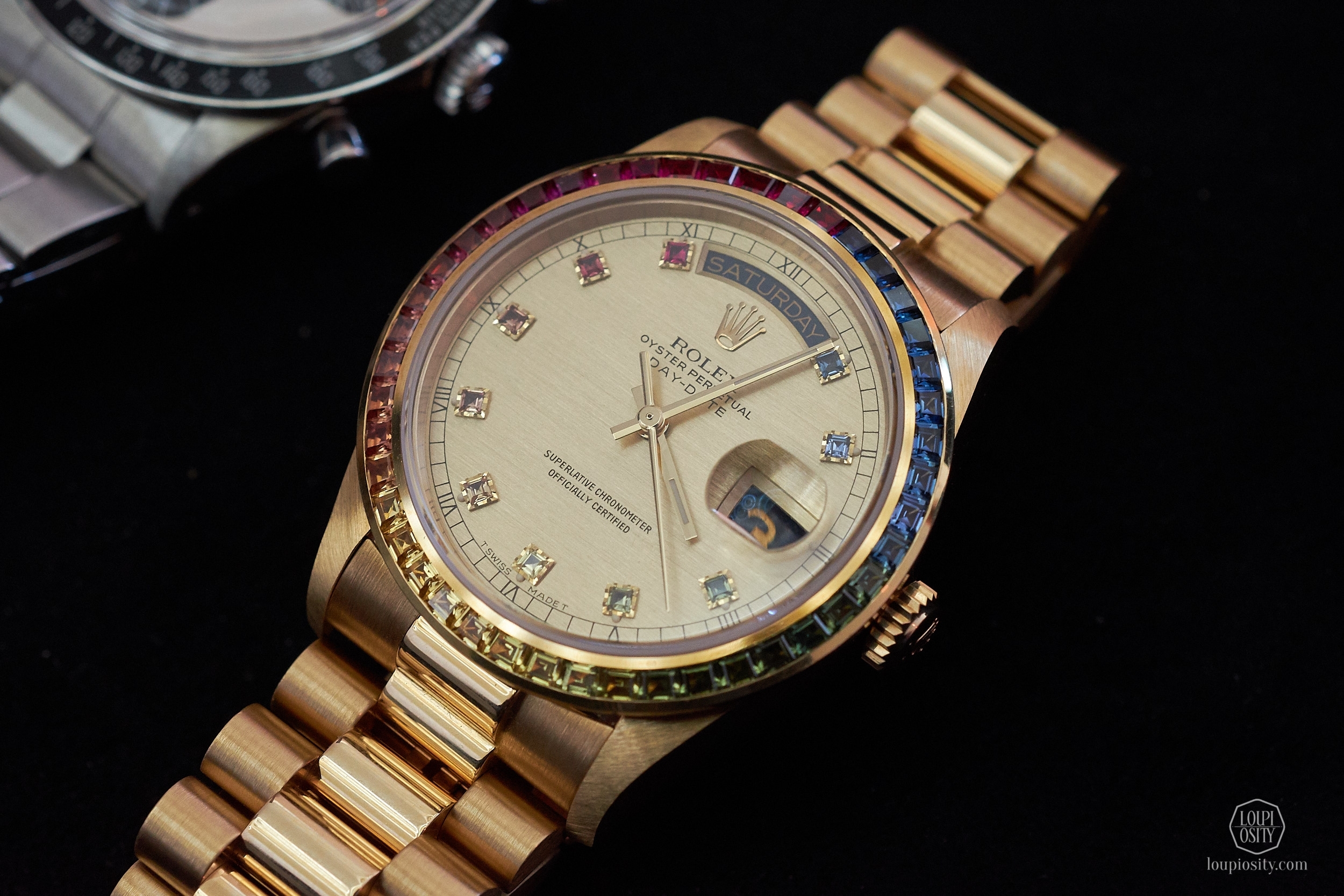 The Geneva Watch Auction: XIV includes a special collection of watches: the only known full set of the original five ‘Souscription’ watches of F.P. Journe and – even more special –  the number 1 in each series.

The idea behind these ‘subscription’ watches was that François-Paul Journe – one of the finest contemporary watchmakers who has been passionately creating haute horlogerie pieces for more than 3 decades – tried to find a way to finance his own brand in 1999.

Journe created 20 tourbillon wristwatches with ‘remontoir d’égalité’ to be sold to existing clients using this subscription system, whereby the future owners would pay part of the price of the watch upfront.

When he decided to launch the Chronomètre à Résonance a year later, Journe used the same system and the owners of the tourbillon were also offered to purchase a Résonance.

The first twenty models made in the Octa collection – the Octa Réserve de Marche, Octa Chronographe and Octa Calendrier – were reserved for the collectors who had bought the original Tourbillon and Résonance ‘Souscription’ series, and were subsequently also called the ‘Souscription’ pieces by Journe.

The timepieces offered at the auction are consigned by the original owner and all have a Number 1, making this set not only incredibly rare but an important fragment of fine watchmaking history. The watches will be auctioned individually.

Lot 141, the platinum, 38mm Octa Chronographe has an integrated chronograph, housed in the calibre 1300 measuring 30mm in diameter, 5.5 thickness with the chronograph mechanism taking up only 1mm – an amazing feat in itself. The Octa Chronograph (in production from 2004 to 2008) was the first automatic fly-back chronometer chronograph with an oversized date window. 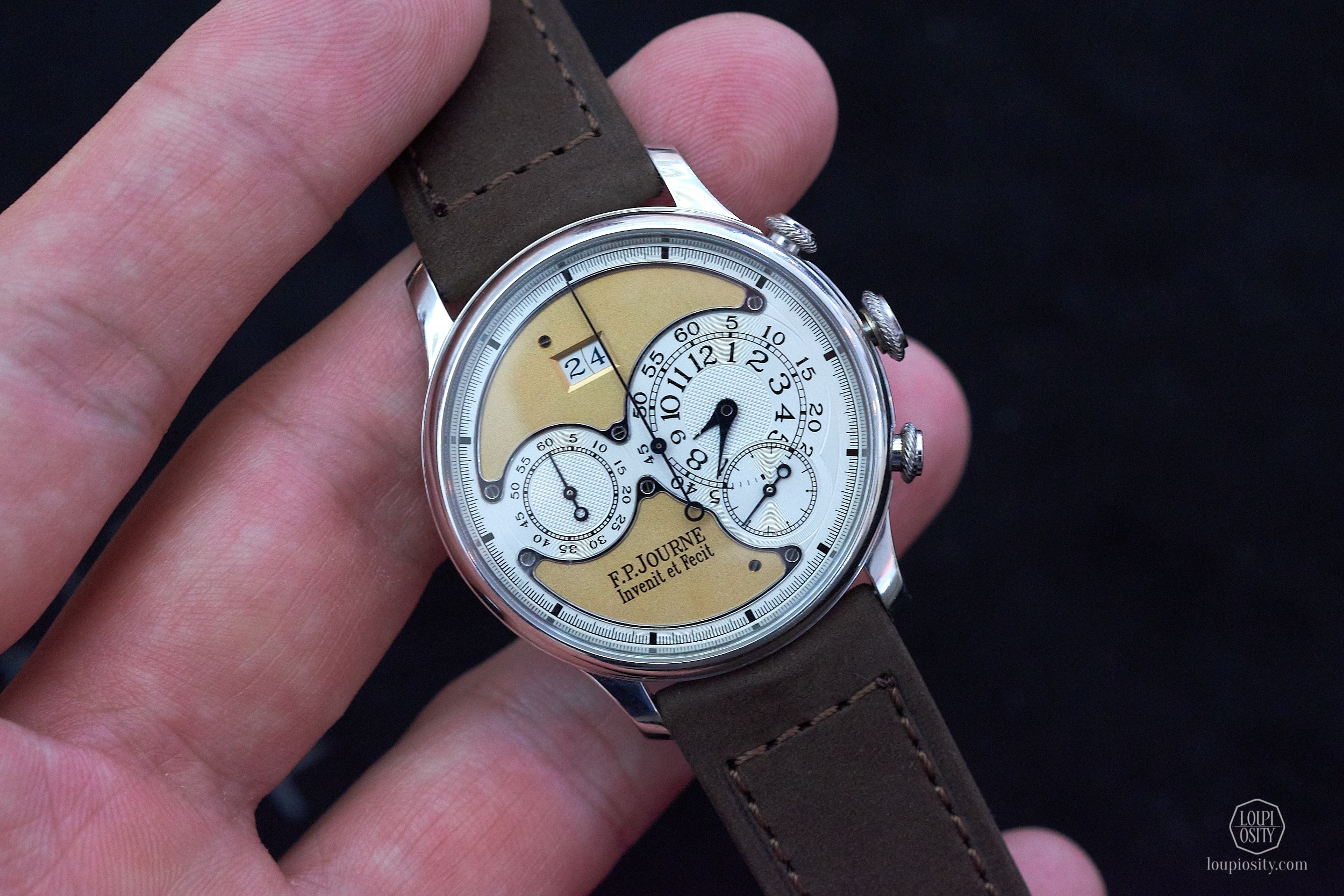 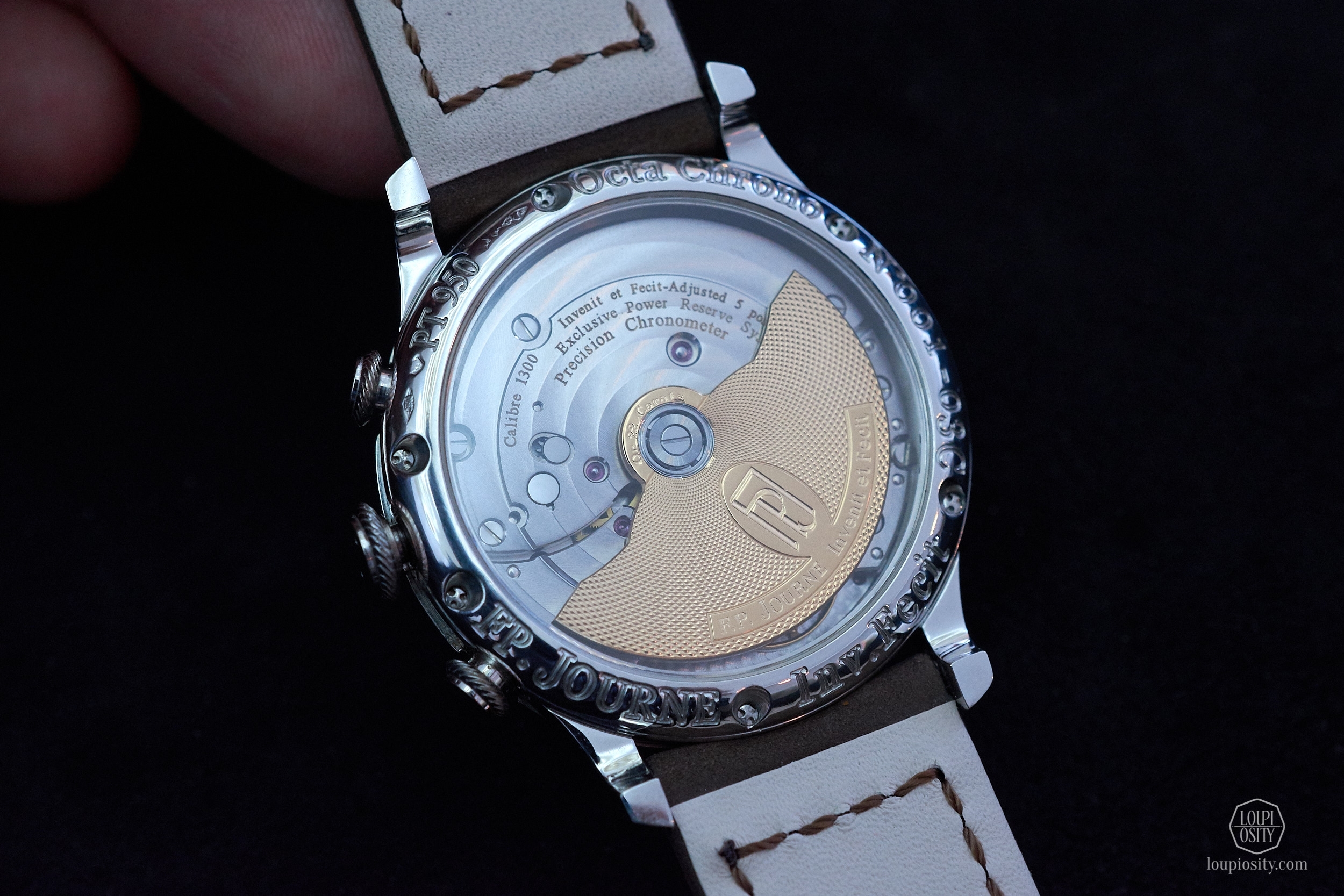 The Reference 6062 is one of the most complicated Rolex watches (back then but even today’s Rolex pieces mostly have simple calendar or chronograph functions) and certainly among the most sought-after collectors’  pieces. We covered a few at recent auctions, including the Rolex Ref. 6062,’Bao Dai‘ which achieved CHF 5,066,000 at the GWA V in 2017 due to the famous-infamous provenance.

It has the triple date functions (month, day and moon phase) organised in a layout with month and day display in two neighbouring rectangular apertures and the date indicated by a hand on the peripheral scale of the dial. The reference was launched at the Basel fair in 1950. This 36mm ‘Stelline’ model example from 1953 is stainless steel – the majority of these models were gold – with a Rolex Jubilee bracelet.

Just under the date windows there is a delicate K.W. Co signature. Two interpretations exist as to what this signature stands for: either it suggests the watch was retailed by the “Knickerbocker Watch Company”, an American importer of Swiss watches and wristwatches, or that it is the signature of a former retailer in India. 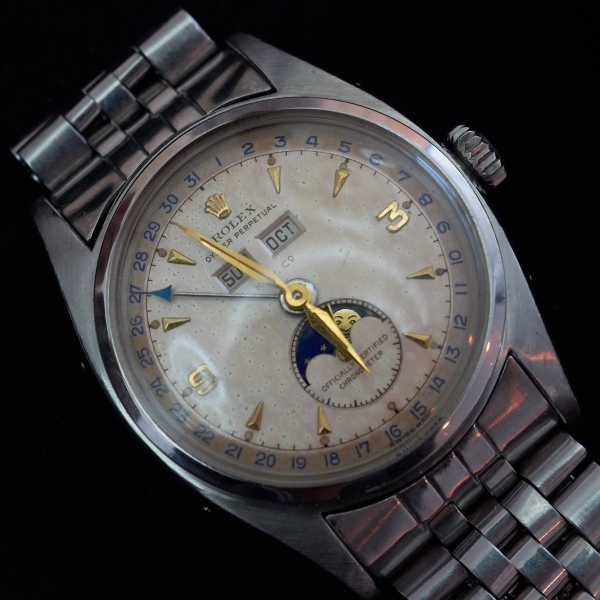 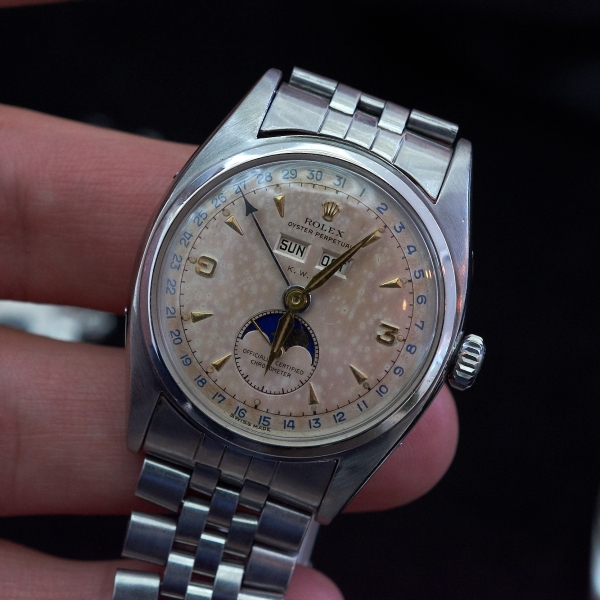 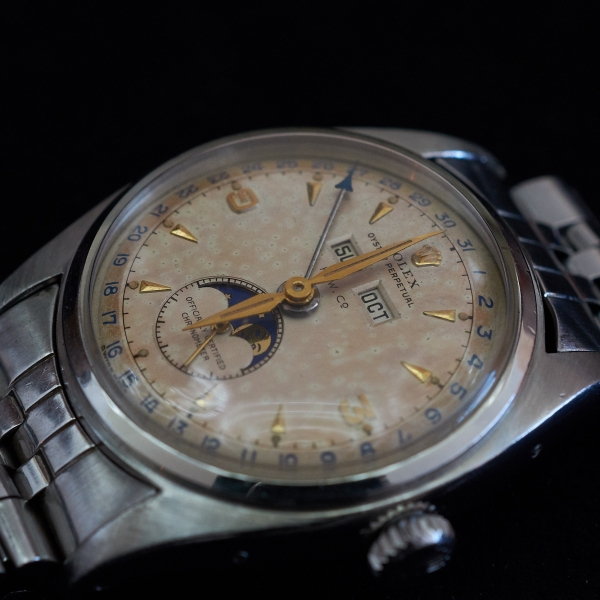 Apart from F.P. Journe, another exceptional contemporary watchmaker’s creations are incorporated in the GWAXIV.

As Aurel Bacs, Senior Consultant Bacs & Russo and Alexandre Ghotbi, Head of Watches, Continental Europe and Middle East, jointly said, “To us and a huge community around the world, Philippe Dufour is the horological equivalent of Michelangelo, the importance of his work cannot be overstated. This “set” of four Philippe Dufour timepieces has been an epiphanous moment for us. Offering his four creations – the Grande & Petite Sonnerie pocket watch, Grande & Petite Sonnerie wristwatch, Duality and Simplicity – is truly humbling and mind boggling. Dufour is a living icon and his creations are as coveted as oeuvres by the greatest artists of our time. (…)”.

Lot 190 is the Duality in pink gold, number 8 – the model was introduced in 1996 and just nine were created altogether (and only 3 in pink gold). The timepiece took inspiration from the so-called ‘school watches’ (double-balance pocket watches) made at the Vallée de Joux watchmaking school, in the 1930s – which is the ‘alma mater’ of the eminent watchmaker. 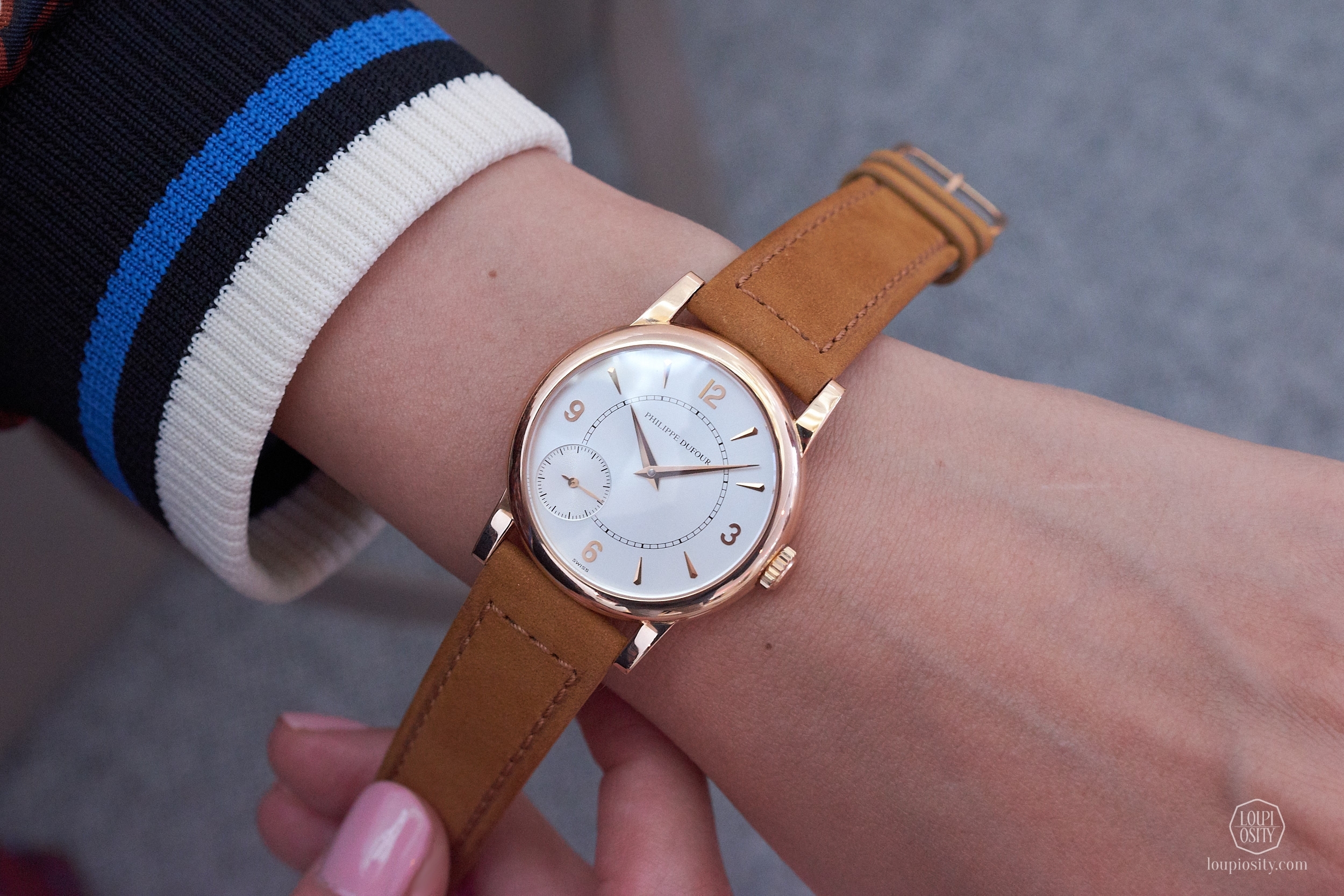 Duality is the world’s first wristwatch using a double escapement (hence the name) featuring two independent balance wheels compensated with a central differential gear. Having two balances connected in this way enables greater accuracy as it allows the balances to average out their rates. If one runs slightly faster and the other a little slower, the rate variations would cancel each other out. Furthermore, this system produces less variation across all different positions. 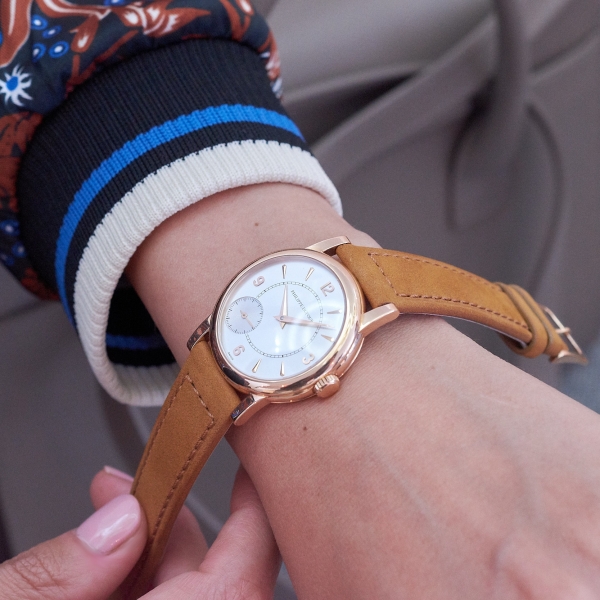 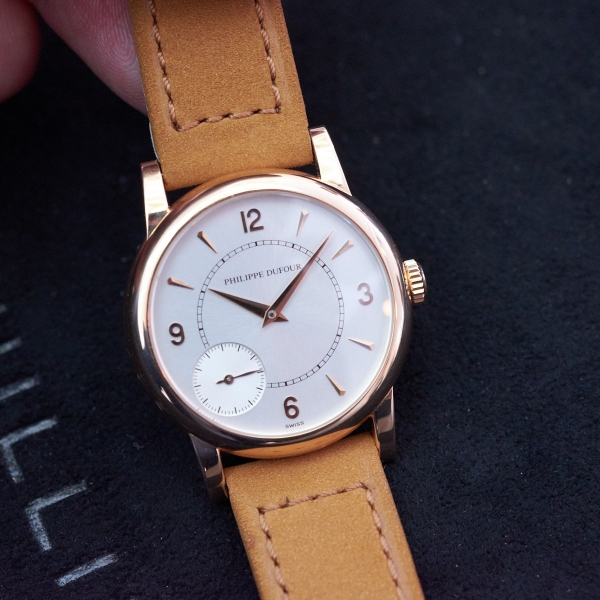 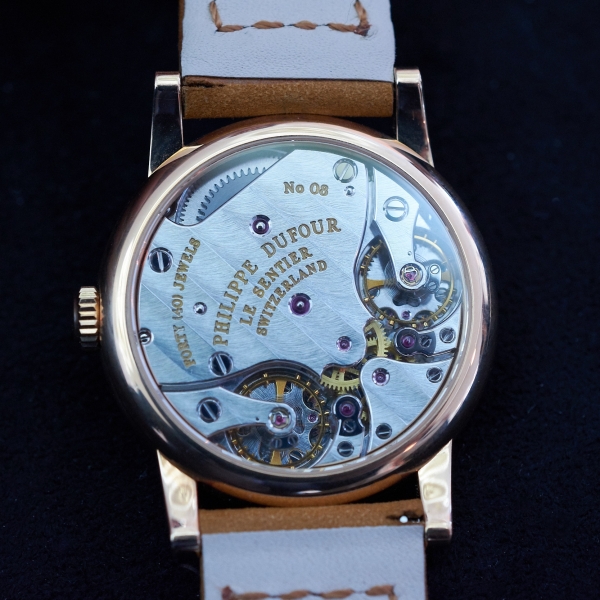 Paul Newman’s Daytona wasn’t a unique piece but it was customised by an engraving on the reverse side. However, this single piece did not just help Rolex to start making money with the Daytona, but baptised a dial-configuration forever.

The stainless steel 37.5mm Ref. 6264 was produced in very limited quantities in the early 1970s. It can be considered a transitional reference, featuring the  ‘old school’ pump pushers rather than screw-down ones (which are in the Oyster case). It is basically a reference 6241 with the upgraded chronometer-grade 727 movement. Rolex exchanged the pump pushers on the later references, so the 6264 is rather rare.

Its dial was called Exotic, before the Newman’s provenance and it is in mint condition on this example. These dials were made by Singer, a dial manufacturer (established in 1919 in La Chaux-de-Fonds) in different variations. For steel pieces we can see mostly black dials with white sub-registers or white with black sub-registers. The font type, the outer second track, the ‘lollipop’ index with square tops printed in the sub-dials and the red Daytona sign are typical on these dials.

An interesting addition to prove the ownership is that the piece not only has the Rolex original Guarantee booklet dated February 1, 1971, service invoice and receipt but the original owner includes photographs of himself wearing the timepiece in different years from the ’60s to today. 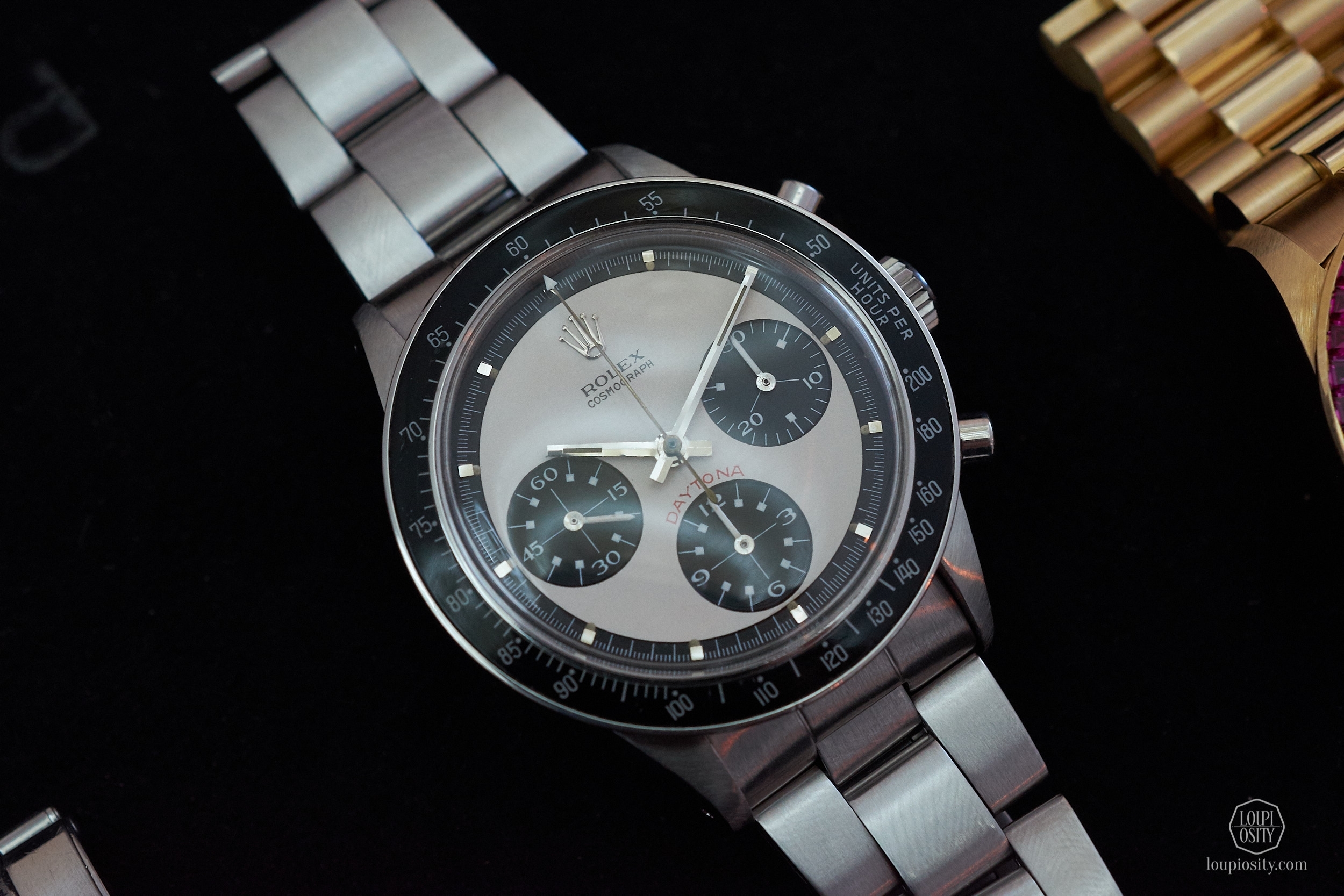 Rolex created a great amount of special orders of Day-Date and Cosmograph Daytona pieces for the Gulf countries (like for example this Rolex Day-Date with Omani Khanjar, 1973).

The United Arab Emirates or Oman commissioned watches from Rolex to be given as gifts for high-ranking officials, foreign dignitaries and diplomats. Today, they are coveted treasures sought after by collectors around the world – together with the interesting stories and curiosities attached to these pieces.

This example is a stainless steel 37mm chronograph wristwatch with UAE Quraysh Hawk dial made for the UAE, upon special request for Mohammed bin Rashid Al Maktoum, Emir of Dubai in circa 1976.

On these types of timepieces the emblem of the country appears on the dial, usually at 6 o’clock but in some rare cases, Rolex removed its name from the dial to make place for the symbol.

The present example has this layout – the Quraysh/Quraish Hawk (the hawk and the falcon plays an important role in the Arabic culture of the Arabian Peninsula) is seen at 12 o’clock, just under the crown. Above 6 o’clock is the signature of the Ministry of Defense (Wazarah Ad Difa’A) written in Arabic script. These graphics are all original and authentic. 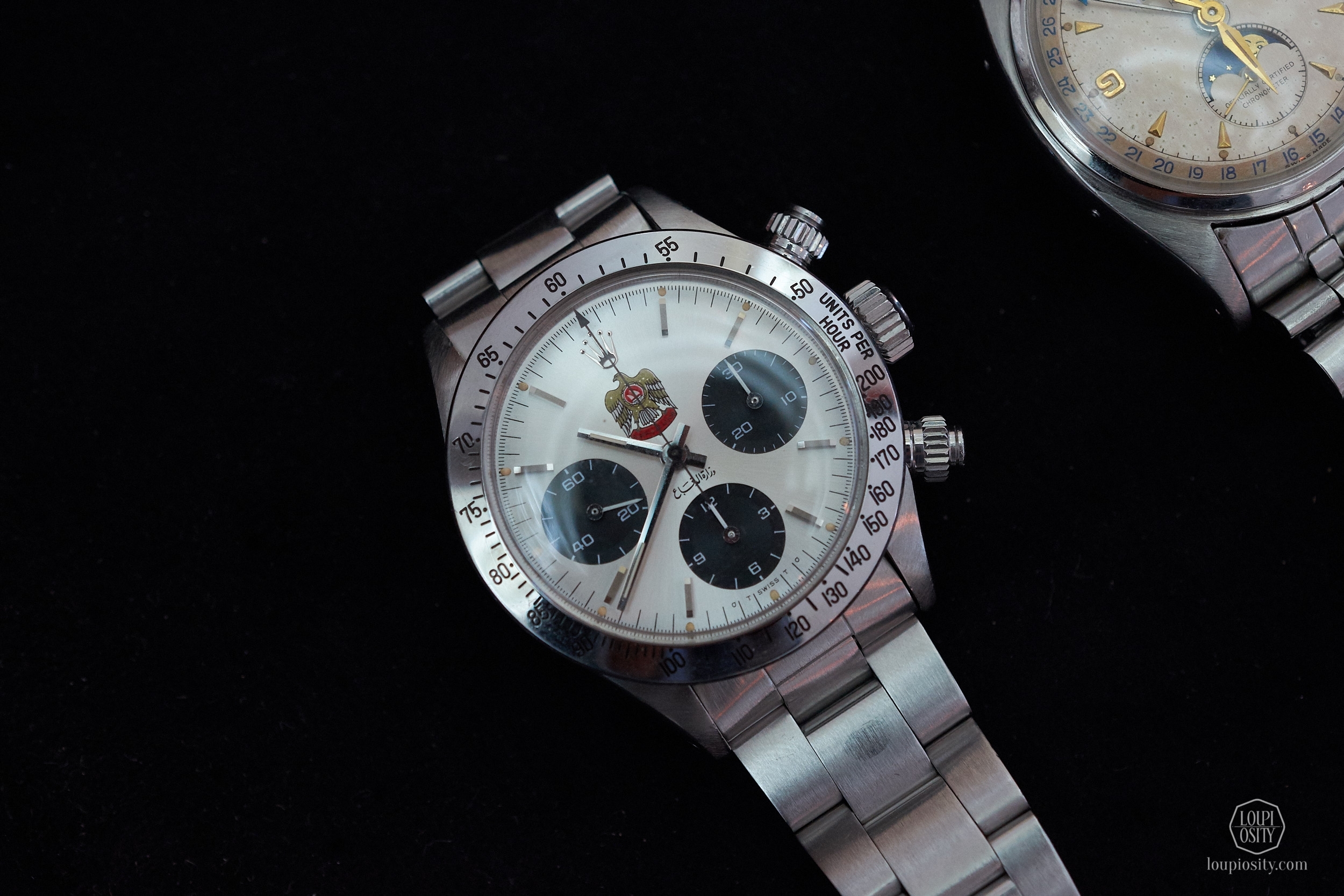 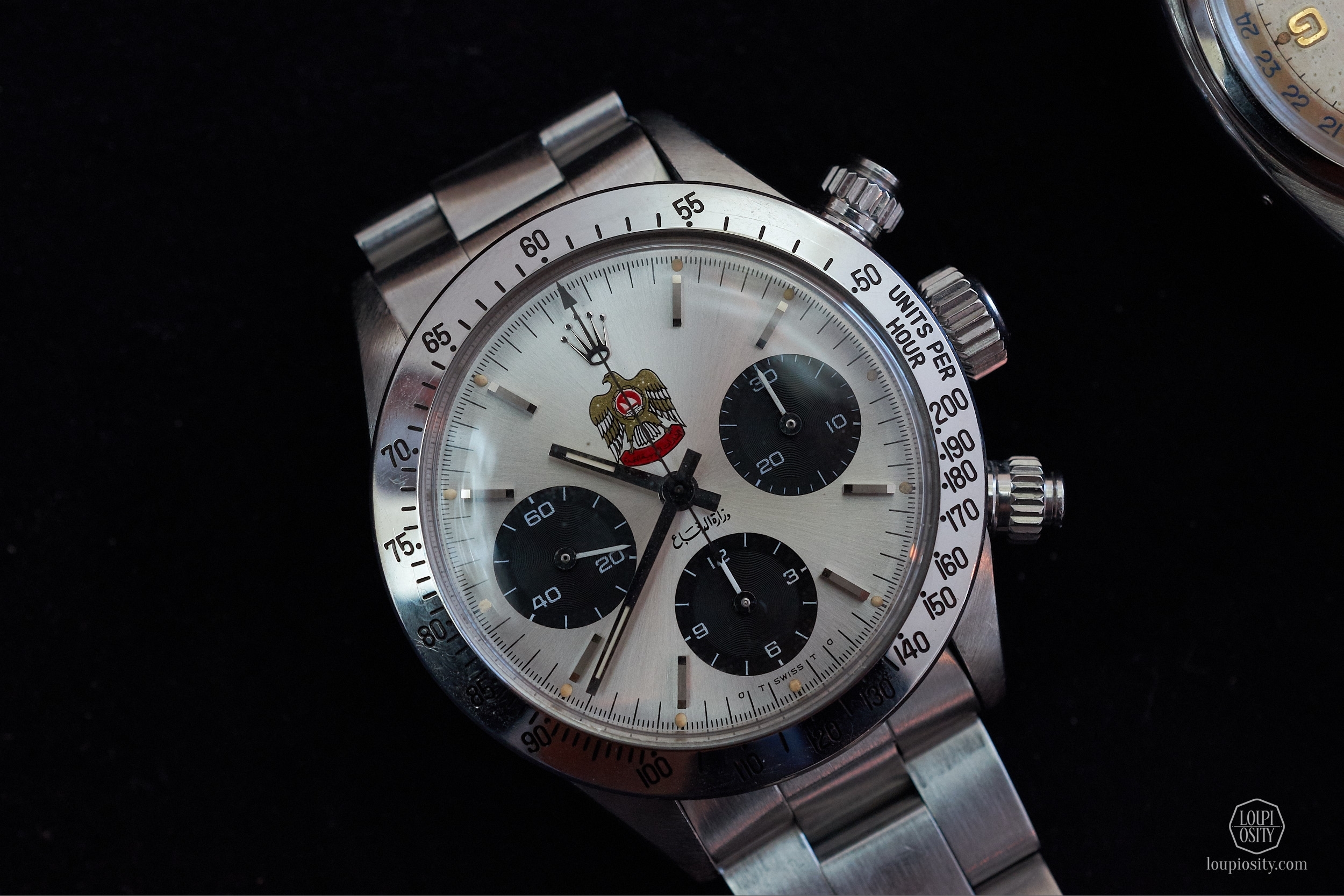