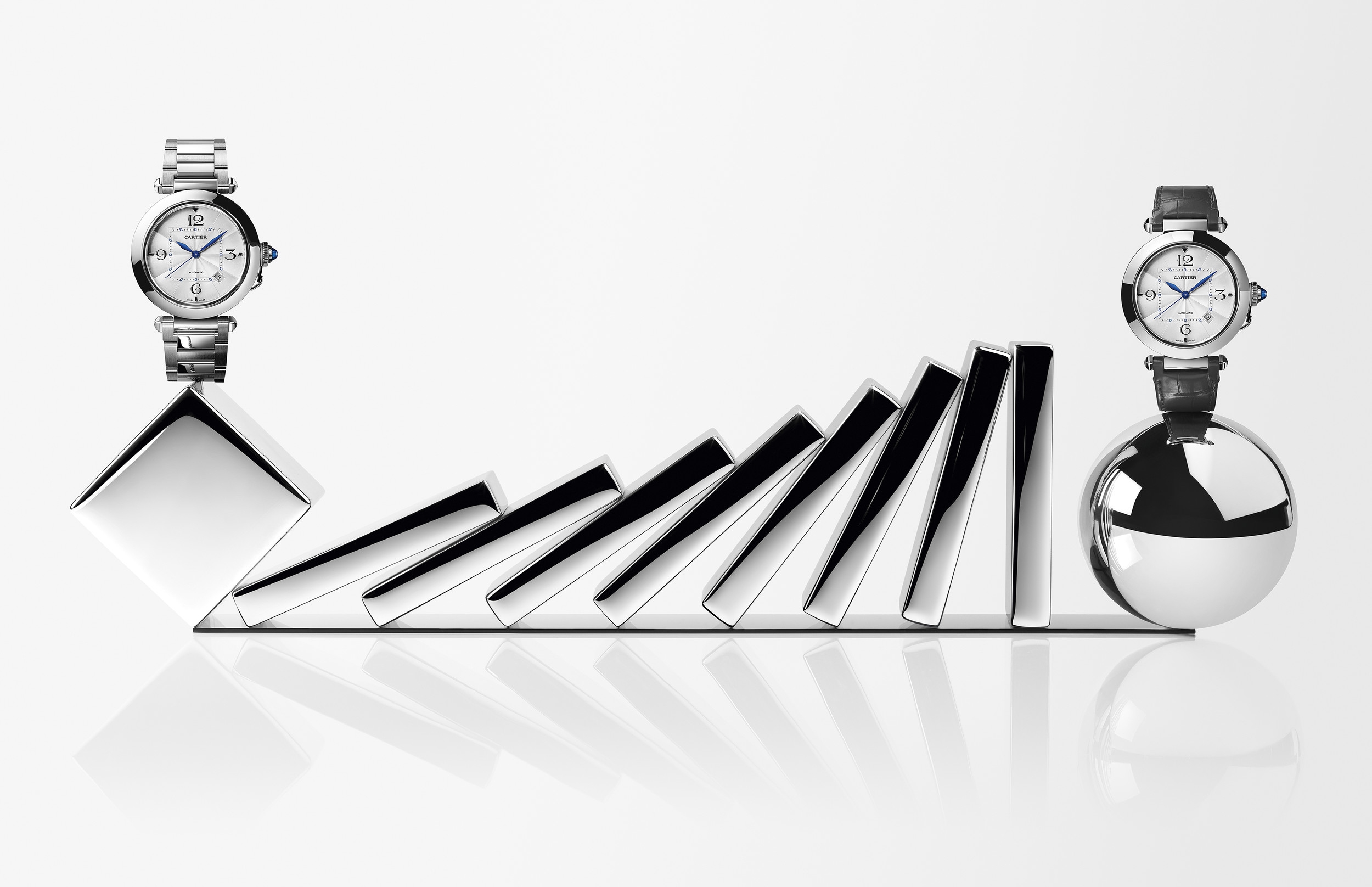 In this series we showcase mechanical and artistic wonders that were especially designed for women and others originally for men that come alive on spirited ladies’ wrists. Due to the current pandemic situation in this special edition we browse the Watches & Wonders 2020 online announcements for exciting novelties for women.

Formerly SIHH, now Watches & Wonders is usually a great opportunity to try on the latest releases and select my favourites for the ‘Girls don’t just wanna have fun’ series. The current circumstances resulted in the strangest watch muster ever, where we must imagine watches based on official laboratory photos and intro videos. But at least organisers managed to pull together a perfectly functioning digital media room with all documents under one roof!

Having reviewed the catalogues, I put the following timepieces on my shortlist. Until we meet, I will play with you all in my imagination!

Being a very visual person I truly appreciate design and aesthetics. Iconic design sets new standards in its field. It is balanced, pleases the senses and can be recognised immediately. Therefore it stands up to the test of time.

Almost 90 years ago, Jaeger-LeCoultre launched a wristwatch that was destined to become a 20th century design classic: the Reverso.

The idea behind creating the first Reverso was to make a watch that could withstand the harshness and hits of the British Army’s polo grounds in India in the early ‘30s. Jacques-David LeCoultre and French designer René-Alfred Chauvot patented the invention of a ‘wristwatch which can slide on its base and flip over on itself’. The creation was an instant success and it has also become one of the most immediately recognisable watches of all time, looking as fresh and modern today as when it first appeared.

This spring La Grande Maison launches a new model for women, with a 40 mm x 20 mm x 7.9 mm stainless steel case and a beautiful red-wine dial. The rich glow is achieved by applying multiple layers of lacquer over a subtle sunray guilloché pattern and is complemented by white numerals. The cool shine of the 27 diamonds and the stainless steel case make the colour of the dial even more vivid. As a final touch, the piece comes with a red-wine alligator strap.

The Reverso One timepieces have only one ‘face’ so the back of the watch – this time the solid steel case-back – is like a blank canvas. It invites for a personalised engraving – a special message, a significant date or even a bespoke motif. 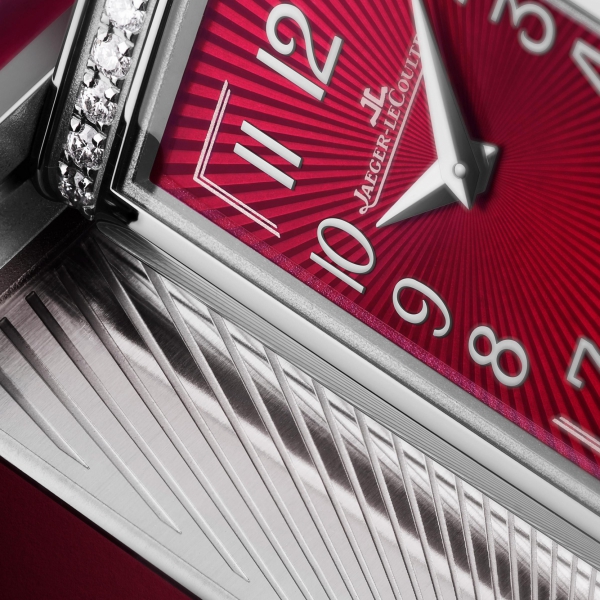 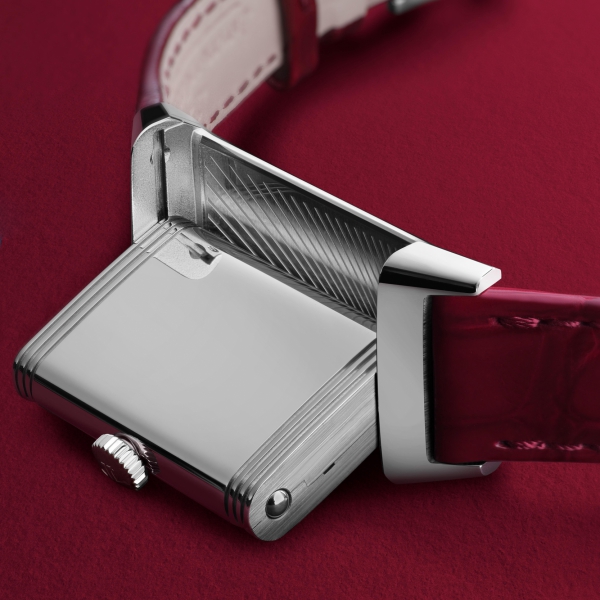 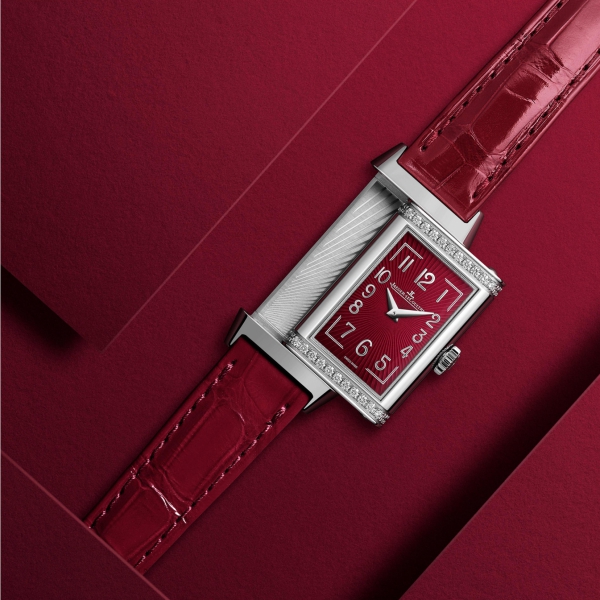 The designers and watchmakers of Cartier have been responsible for a number of watch icons. This offers the Maison an amazing heritage to revisit and adapt for the 21st century.

2020 brought the revival of the Pasha de Cartier. As the story goes, Louis Cartier created the first version of this watch in 1931 (other sources state 1934) for Thami El Glaoui, the pasha of Marrakech. He needed a watch that he could use during various activities, like swimming. Cartier came up with a gold wristwatch, which was waterproof but sleek and elegant at the same time.

In 1985 Gerald Genta (the renowned Swiss watch designer, who designed the Royal Oak of Audemars Piguet but worked with other firms too, including IWC and Patek Philippe among others) created the modern-day Pasha. This version was again water-resistant, had a 38mm case (which seemed slightly large at that time), and a rectangle minute rail-track within the round dial surrounded by 4 Arabic numerals. The case was completed with so-called Vendome lugs and an oversized crown with a blue sapphire – the shape of the crown was in nice harmony with the lugs.

The Pasha de Cartier became a success among ladies too and had seen various versions, materials and complications.

The 2020 Pasha de Cartier 35mm and 41mm are produced in steel, yellow gold, pink gold and are set with diamonds. The line contains fine jewellery and fine watchmaking creations with tourbillon and even skeleton versions too. All models are equipped with mechanical movements – the 1847 MC in the simpler versions, the 9466 MC in the tourbillon model and the 9624 MC in the skeleton timepieces.

The straps are interchangeable thanks to an adaptation of the QuickSwitch developed by Cartier, which the brand introduced in the Santos line in 2018. The SmartLink system allows the wearer to change the size of the bracelet without any tools.

An iconic Cartier design element is the blue sapphire (or spinel) crown – on the new Pasha the chained crown is even more special. It has a winding crown with the stone, hidden under the fluted crown cover – again with a blue spinel or sapphire. The owner can unscrew the crown cover, where she or he can have a customisable engraving. 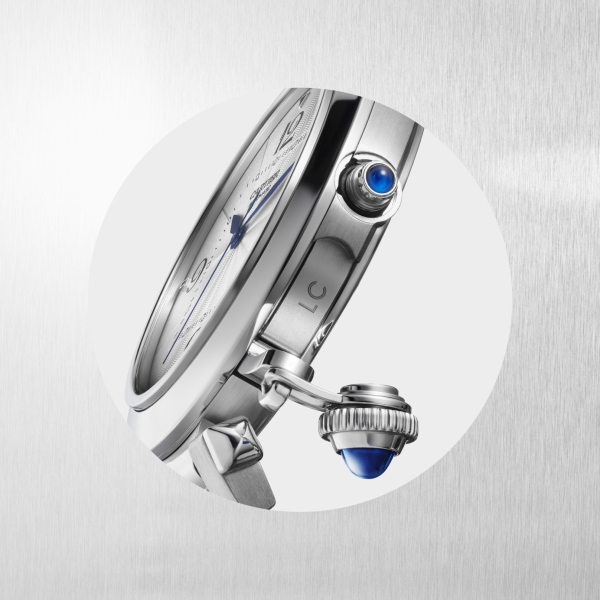 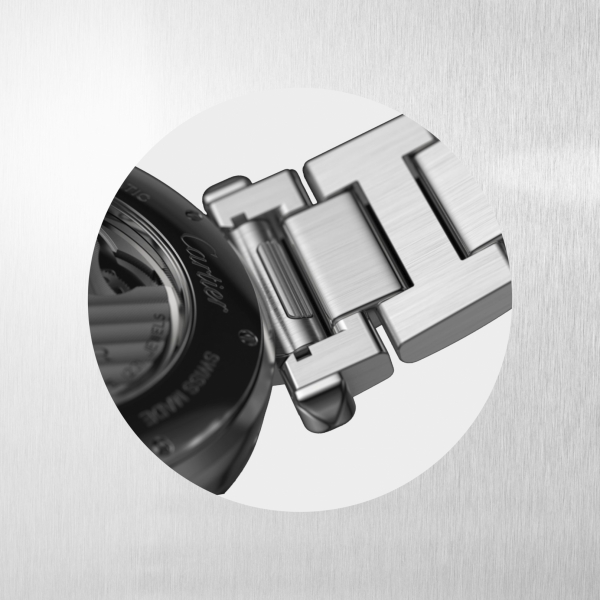 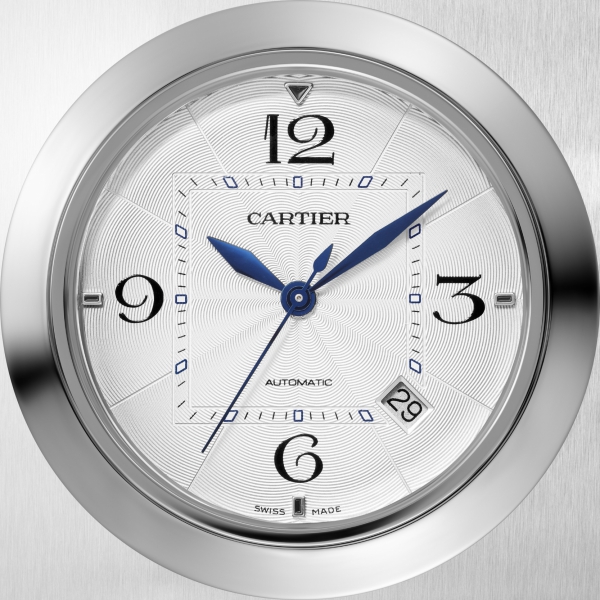 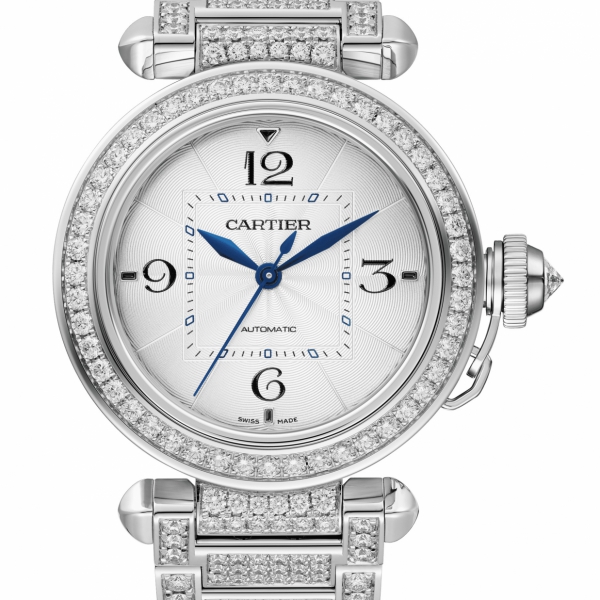 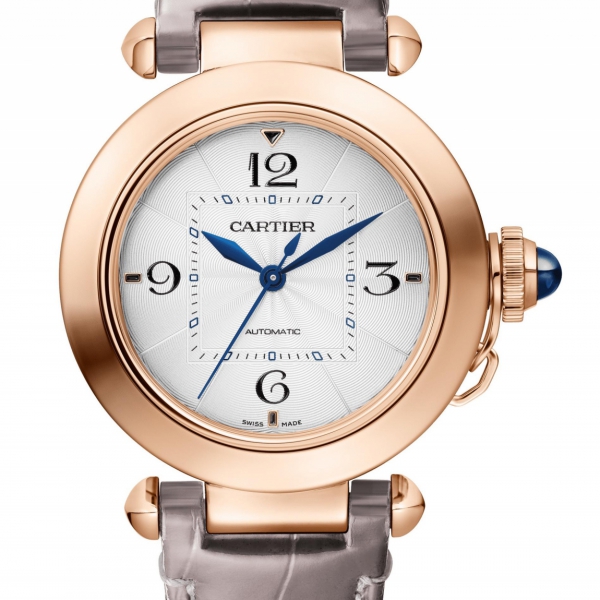 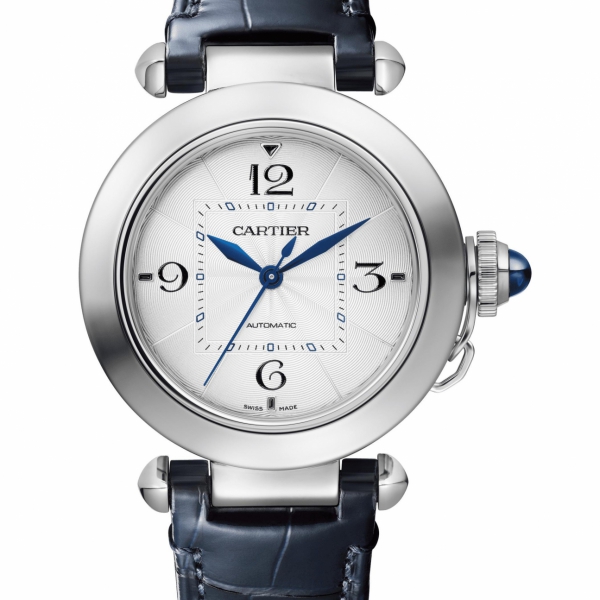 The new Moser piece is a total opposite in design of the above mentioned jewellery timepiece. It is extremely minimalist yet fabulous.

Many times I have praised H. Moser & Cie ’s approach to luxury. About five years ago the brand released the first purely minimalist Concept model, equipped with a dial void of indices or a logo. Beyond the customary material meaning, luxury conveyed by these watches embodies the perfect freedom from conventions. It is for those who feel completely accomplished and satisfied when looking at a mechanical masterpiece on their wrist with only a beautiful dial, a few hands and no additional fluff – not even indexes or numbers. Purity becomes the logo of these pieces. I’m a huge fan of the pieces so I was happy to see that Edouard Meylan and his team went a step even further.

The new Venturer Vantablack® Black Hands has a 39mm version in white gold. As its name suggests, it has a Vantablack® dial and black hands. Thanks to the Vantablack®, the blackest black ever produced by artificial means, this time the black hands seem to be more like grey. 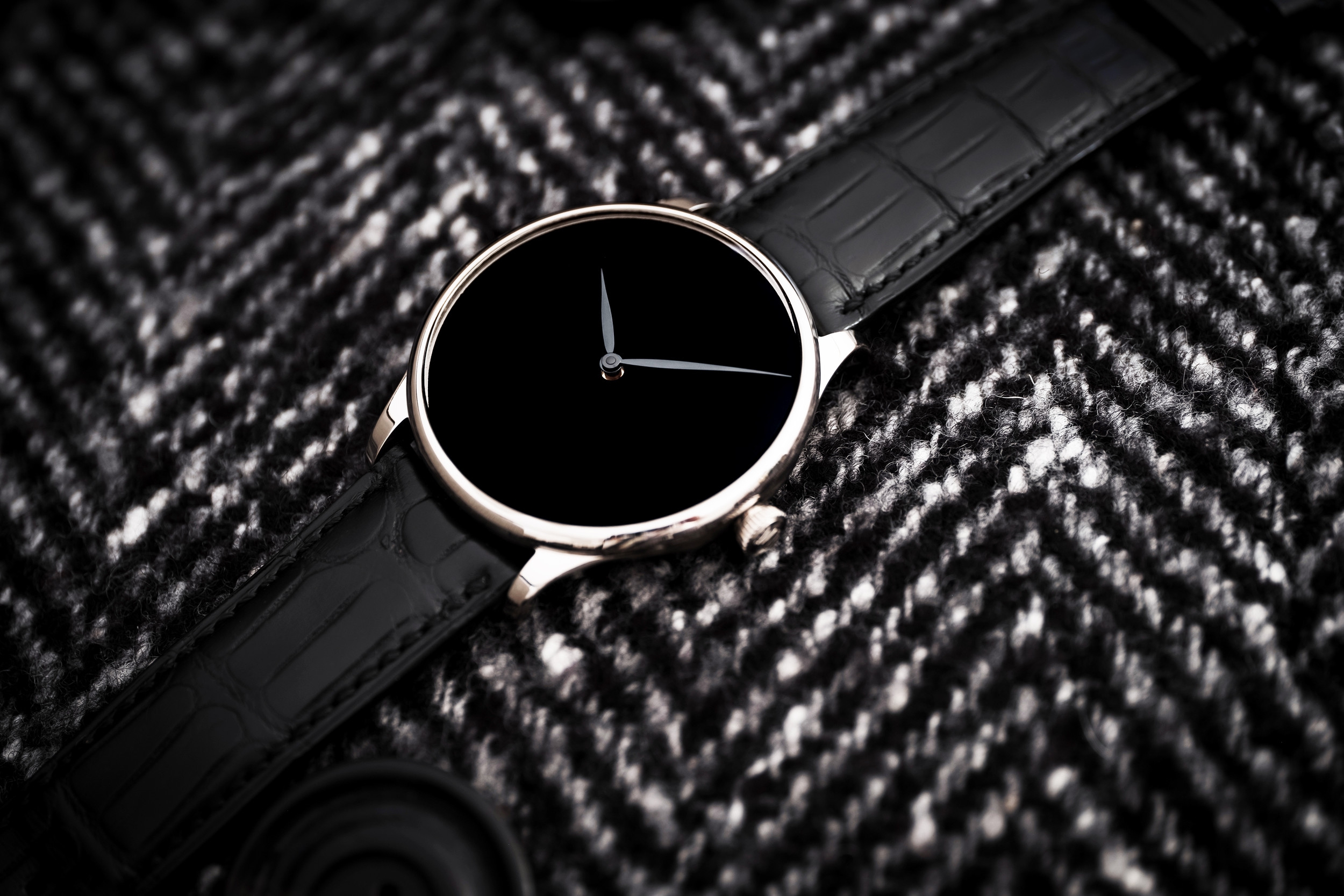 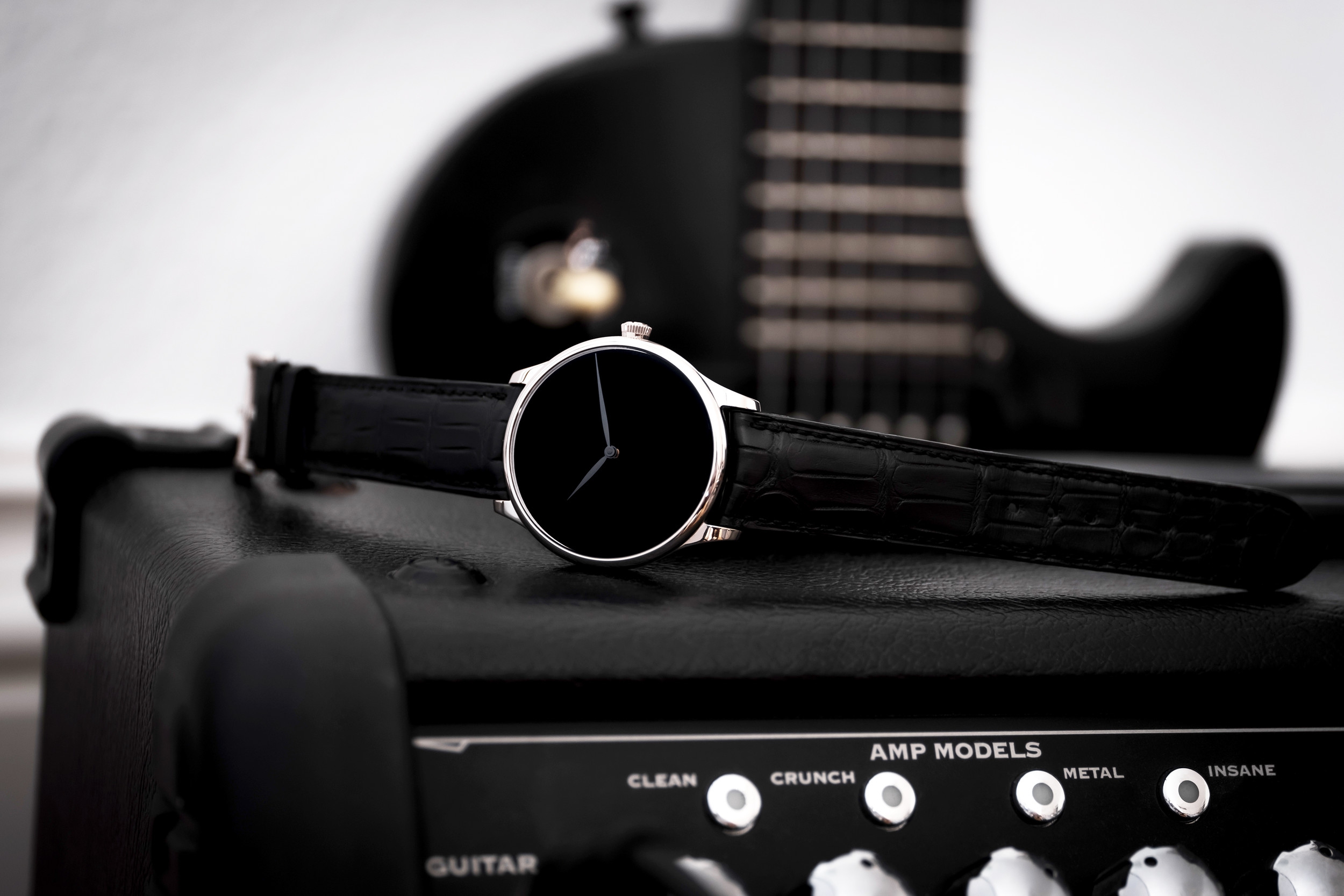 Vantablack® is the brand name for a relatively new class of super-black coatings, developed by Surrey NanoSystems founded by Ben Jensen in the United Kingdom. These coatings are used in special fields such as deep space imaging, automotive sensing, optical systems, art and aesthetics.

In order to see an object, light from the object must enter our eyes. Put it very simply: our eyes see things because the light reflects off of objects and hits the eye. If a surface absorbs light rather than reflects it the object seems darker. Vantablack® coats the object with a special structure which absorbs the light. As the company explains: ‘it is not a black paint, pigment or fabric, but is instead a functionalised “forest” of millions upon millions of incredibly small tubes made of carbon, or carbon nanotubes. Each nanotube in the Vantablack® forest has a diameter of around 20 nanometres (that’s about 3,500 times smaller than the diameter of the average human hair), and are typically from around 14 microns to 50 microns long. A surface area of 1 cm2 would contain around 1,000 million nanotubes.’


Anish Kapoor – Indian-born British sculptor known for his installations and conceptual art – began working with Vantablack in 2014 and later acquired exclusive rights to the pigment. This step fired up a rather interesting battle in the art world – another artist Stuart Semple created a Kickstarter project to support the development another super black paint, the Black 3.0.

Last year there was already news that the engineers of MIT (Massachusetts Institute of Technology) developed an even darker material.

Although it’s resistant to shocks and vibrations, Vantablack® remains a material which is extremely delicate to handle. The watchmakers of Moser had to put a structure in place and develop special processes to successfully work with this material. Once behind the sapphire crystal, Vantablack® is protected as if in a safe.

Girls don’t just wanna have fun – Vacheron Constantin, Part… In this series, we showcase mechanical and artistic wonders that were specially designed for women and others originally for men that come alive on spirited ladies’ wrists. Vacheron Constantin presented wonderful novelties to women at the online Watches and Wonders event in April. Finally, we were able to try them on.IWC Schaffhausen at Watches & Wonders Shanghai IWC Schaffhausen Portugieser Chronograph was released at Watches and Wonders Shanghai with steel bracelet.Interview with Franziska Gsell, CMO & Sustainability… I met Franziska Gsell, CMO & Sustainability Committee Chair, Executive Board Member at the stylish and minimalist IWC Schaffhausen booth during Watches and Wonders. We discussed how the pandemic has changed the way IWC interacts with customers and what sustainability means for the brand.