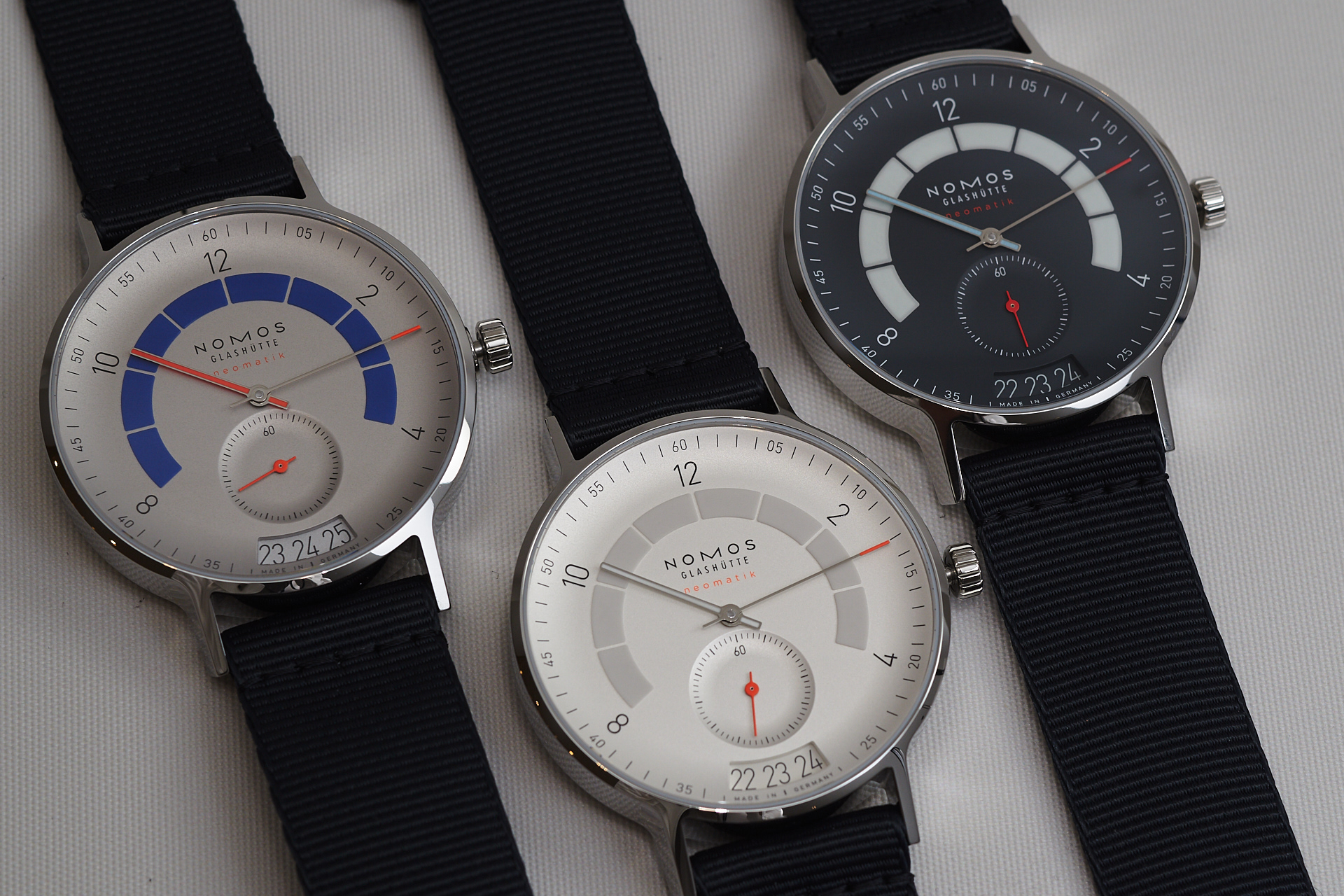 The new Autobahn model arrived to 2018 with high speed and took the Red Dot Design Award immediately. The engine is the company’s new generation DUW 6101 movement, which also powers the new editions of Tangente, Orion, and Ludwig. We discovered the pieces in Basel.

Back in my crazy days at university, these lines elevated to a local proverb. Although I never followed it myself, they are from a popular German series with flying, exploding and crashing cars on the motorway in the state of North Rhine-Westphalia. The policemen and the bandits of ‘Alarm für Cobra 11 – Die Autobahnpolizei’ were accountable for half of the car crashes in the whole of Europe, for sure. The series surfed the legend of the German highways which have become a real concept of speeding. The first public road was opened in 1932 between Cologne and Bonn and today the motorway network reaches 13,000 kilometres in Germany, making it one of the densest networks in the world. 52% of them only have a recommended speed limit. The land speed record on a highway of 432 km/h (268 mph) was also set here between Frankfurt am Main and Darmstadt by Rudolf Caracciola in 1938. The cult of the ‘autobahn’ has been enforced further by cult bands, such as the electronic synth-pop band Kraftwerk. They released the album ‘Autobahn’ in 1974, the title song capturing the feeling of driving on the highways climbed up to the top of the charts world-wide.

In 2018, NOMOS Glashütte encapsulates the love of speed and the shapes of the old record breaking cars in my favourite NOMOS novelty this year: the Autobahn. The manufacture commuting on the Berlin – Glashütte axis summoned designer and architect Werner Aisslinger to co-create the piece.

Werner Aisslinger was born 1964 in Nördlingen, Germany and studied industrial design at the Hochschule der Künste (HdK) in Berlin. Among his first big commissions was the prototype of the Loftcube housing – a mini, compact portable house, which can be placed on the roofs of the city just like a container. In 1993 he founded his own company, ‘studio aisslinger’, with an emphasis on product design, design concepts and brand architecture and he (together with his creative partner Tina Bunyaprasit) has been working with brands like interlübke, Mercedes-Benz, adidas, IC-Berlin, Marc´o Polo, thonet, flötotto, berker, Hugo Boss, Younicos and many more.

Aisslinger has also made a name for himself with his work for Vitra, a Swiss furniture company ‘dedicated to improving the quality of homes, offices and public spaces through the power of design’. He contributes to futuristic hotels (like the Michelberger Hotel, 25h Hotels in Zurich and Berlin, or for the Weitzer Hotel Group), edgy bars and dining spaces, greenhouse installations or retail stores. His works can be found in museums around the globe: in the New York Museum of Modern Art (MoMA), the Fonds national d’art contemporain in Paris, and the Victoria & Albert Museum in London.

The car designs of the heydays between the 60s and the mid-80s had a great influence on his curves, which also return on the watch he dreamed for NOMOS. ‘Every discipline has its peak and for me car design peaked between 1975 and 1980. It was a very futuristic period. (…) ‘, Aisslinger said in an interview. The characteristic straight external case wall of NOMOS is smoothed nicely on the dial. It is like a miniature skate park flowing down towards the centre and breaking down again in the seconds sub-dial. The 8 luminescent chapters half way between the edge and the centre and stretching in a 240 degrees arch make the racing spirit evident. 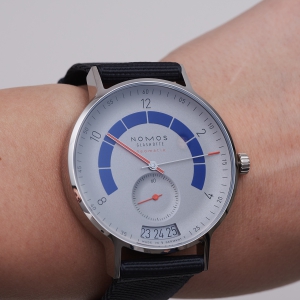 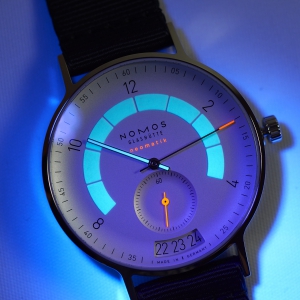 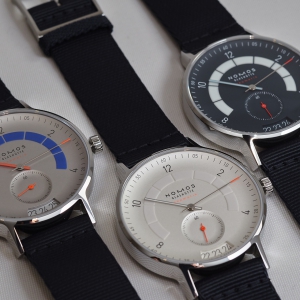 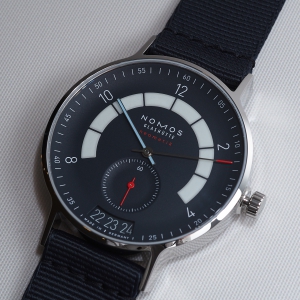 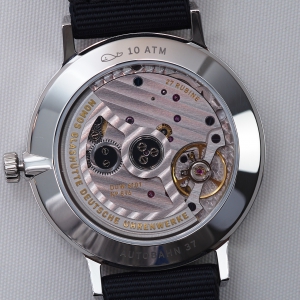 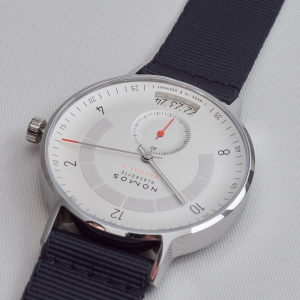 The beating heart is the fresh DUW 6101 movement, which continues on the path set by the DUW 3001 in 2015: a thin (3.6mm) automatic calibre incorporating the NOMOS Swing System escapement and it adds an integrated date mechanism too. The date ring revolving around the movement is the new subject of creativity at NOMOS. The cut-out shape from this smoothly dropping dial at the Autobahn speaks for itself but it comes back in another way on the Tangente below.

The Autobahn is available in three 41mm stainless steel versions: in sportgrau (‘sport grey’ with blue luminous ring and neon orange accents), nachtblau (midnight blue with white luminous ring) and the most reserved one with white silver-plated dial with a light grey luminous ring. It actually reminds me of Rudolf Caracciola’s Mercedes-Benz W125 ‘Rekordwagen’ from 1938 (third row from the bottom in the gallery here).

Check out this great video about Werner Aisslinger’s view on car design and watches:

Three important NOMOS models the Tangente, Orion, and Ludwig arrived to a new chapter by embracing the new DUW 6101 calibre. Tangente neomatik 41 Update, Orion neomatik 41 date, and Ludwig neomatik 41 date are the full names of the 2018 editions. All are available at select retailers from mid-May. The Tangente displays the same date ring completely differently.

‘A true classic doesn’t need an update. But—if it’s done well, it can take one.’ – says Michael Paul, designer of the brand. He has been with NOMOS Glashütte for over a decade now. The idea of redesigning came with the new calibre, especially thanks to the date ring. The new watch became the most grown up model with its 41mm diameter, but kept the same proportions. This time, the date ring does not hold any numbers – they are on the dial next to cut-outs around the entire circumference. The ring on the movement has only a single red chapter, which appears under another pair of cut-out day-by-day. 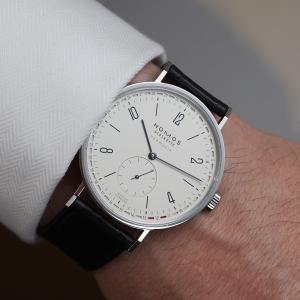 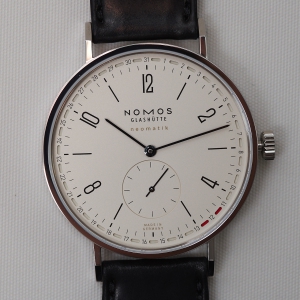 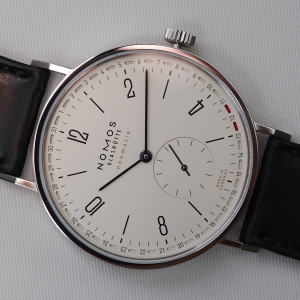 By the way, the date mechanism is quick and easy to set and you can turn it in both directions with the crown.

The DUW 6101 is another major milestone for the company. NOMOS launched it by clearly showing how such a layout in the hands of good designers can be brought alive in many different ways. One of them, the Autobahn, has succeeded so well that it just won the Red Dot Design Award 2018. The official award ceremony will take place on 9 July in Essen, Germany.

Have you seen the cute and colourful Tetra models? Check them out here. 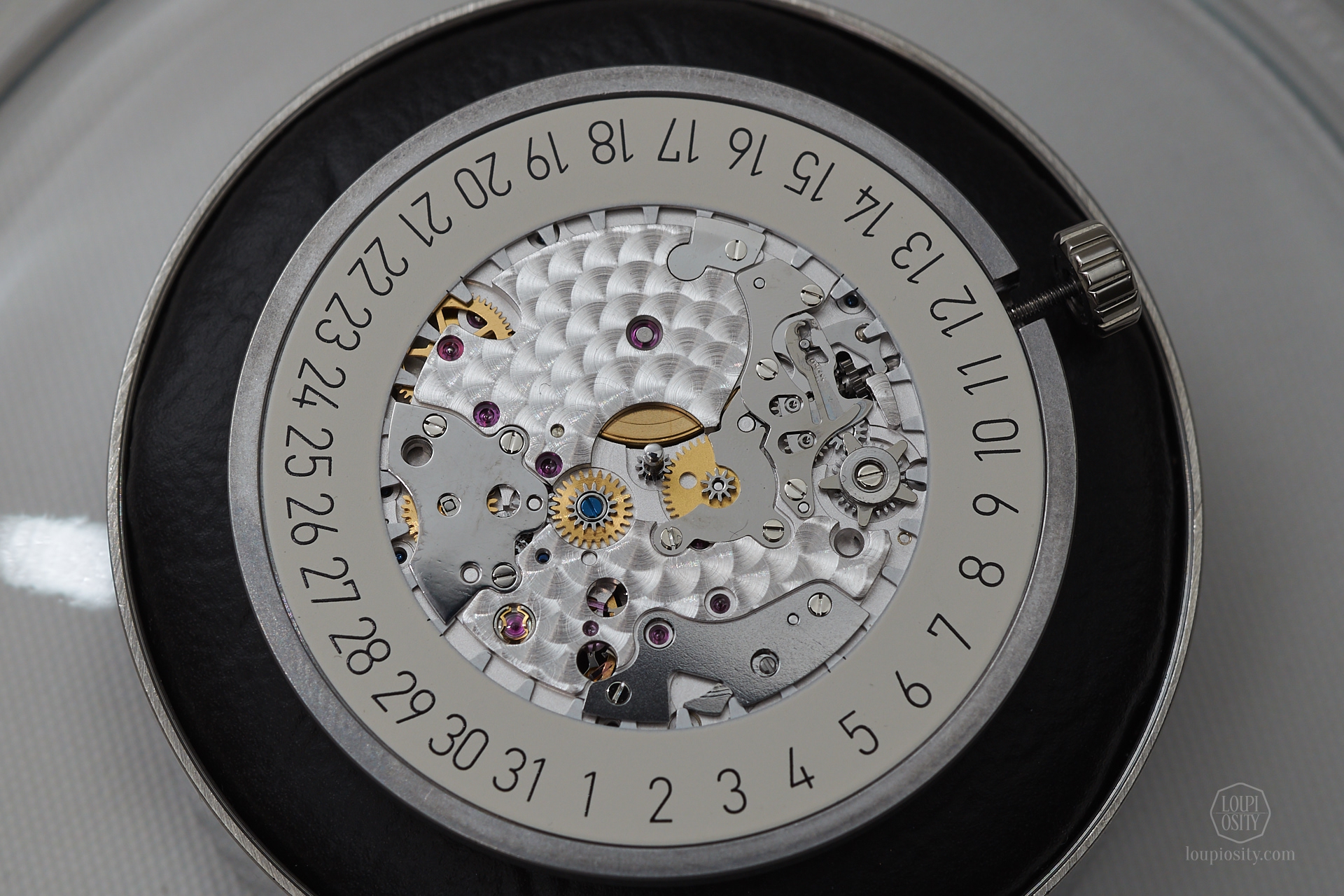 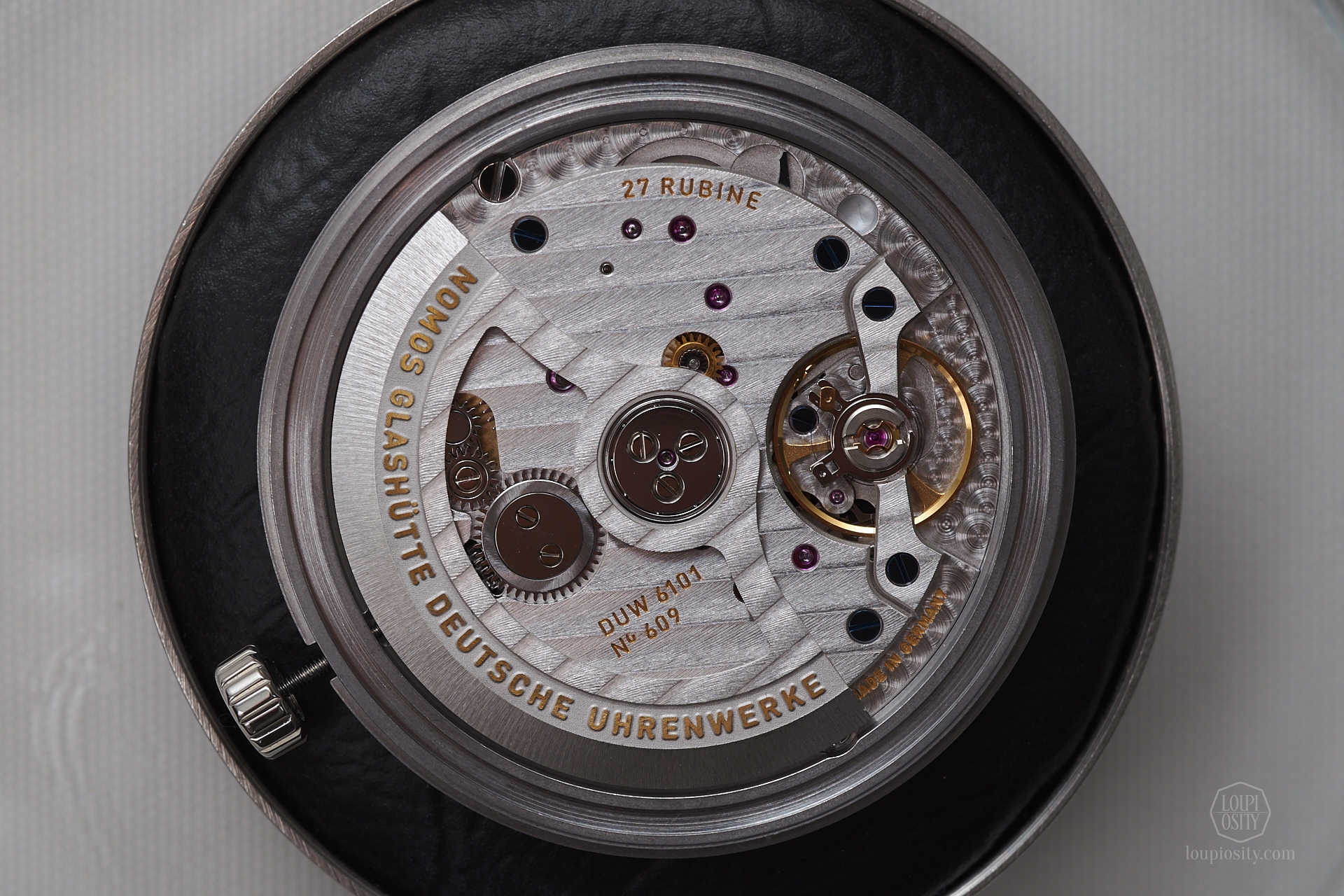 Bovet Battista Tourbillon at Dubai Watch Week 2021 At the Dubai Watch Week 2021 we had the chance to see the Bovet Battista Tourbillon, the next milestone of the brand’s collaboration with Pininfarina. The co-designed model is inspired by Pininfarina’s Battista GT Hyper Car.Ressence Type 1 Squared X Ressence celebrates its 10th anniversary with the Collection X - four watches, released throughout the last months, each is limited to 40 pieces and shares the main dark olive-green colour-theme. Now here is the latest one, the Type 1 Squared X.NOMOS Glashütte Tangente neomatik platinum gray NOMOS Glashütte just released the Tangente neomatik platinum gray, available in diameters of 35 and 39 millimeters – an elegant new addition to the most successful watch line by the German brand.