Posted by Eszter on 22nd April 2018 in Uncategorized
Tags: klokers 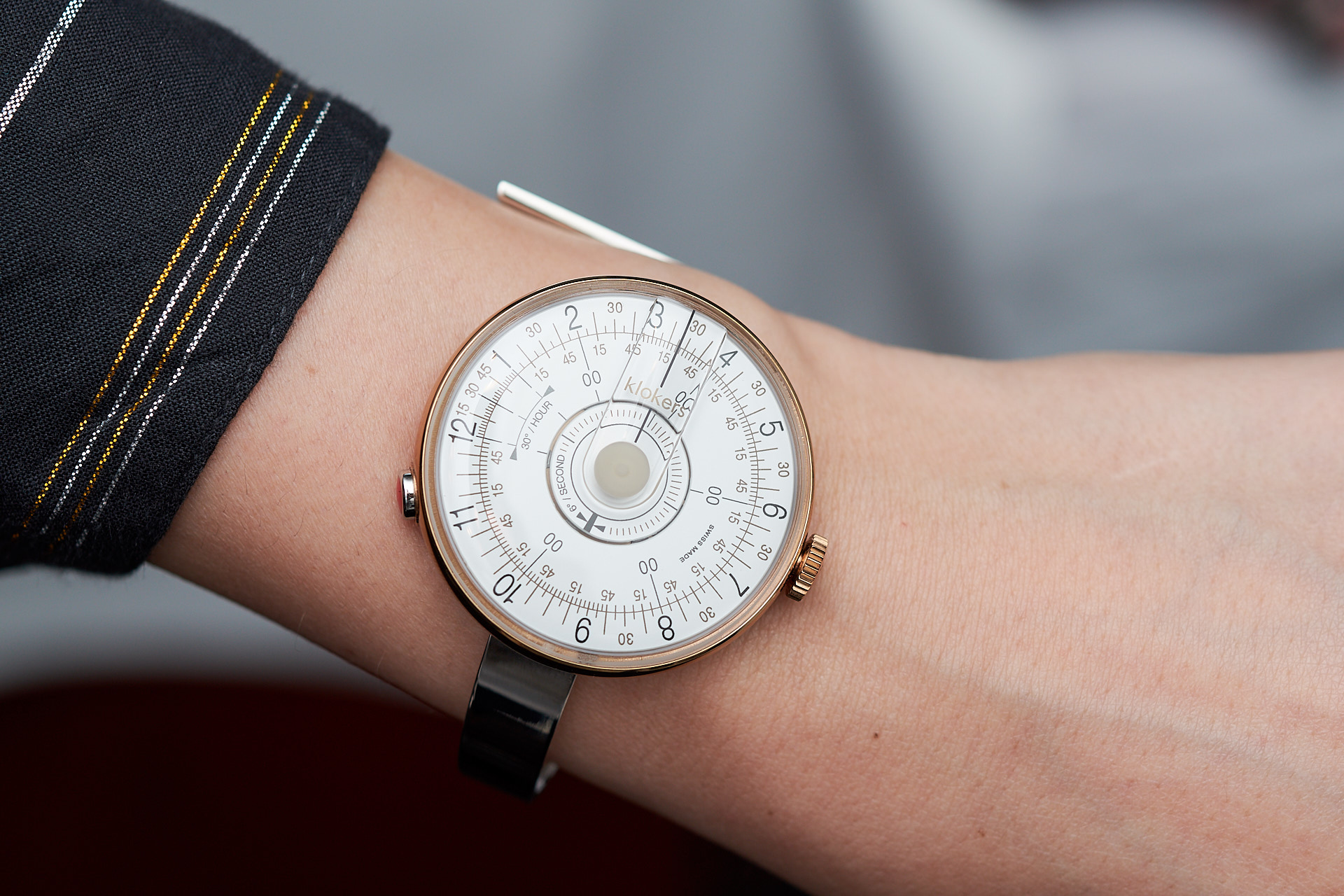 UPDATE: Klokers informed us about the ceasing of the activity as of July 2nd, 2019.

With the following article we sail onto different waters, but the crowdfunding phenomenon is interesting and we particularly like the brand imagined. We met klokers in Basel.

It’s been only about 5 years since we launched Loupiosity, but even in such a short time I have seen many watch brands come and go. Volatility is similar in crowd funding campaigns. It is a popular practice of backing the realisation of a creative venture by raising money in small amounts from individuals – but you hear about so many frauds, controversies and cancelled projects.

And of course, there are watch companies or aspiring watch brands on these platforms, keen on financing their ideas by the passionate crowd. On Kickstarter alone there are more than 1,100 projects in the watch design category!

One that has gathered much experience by successfully completing two campaigns is a French brand manufacturing their products in Switzerland, klokers. We had an enjoyable conversation with Mady Jay communications and PR manager at klokers in Basel about the brand, the pieces and the special agile development method of the crowd funding model.

It is not easy to tell what you need to be credible when raising money, but creativity, strategy and the right concept for addressing the targeted audience won’t hurt.

In late 2013, Nicolas Boutherin developed the idea of the KLOK-01 and in the next 12 months he worked with founding partner Richard Piras on the concept and the designers worked on the prototype. They raised an initial fund to go on with establishing the Swiss company and started scouting for the right manufacturing partners. The first Kickstarter campaign in September 2015 aimed for EUR 50,000 to get the production of KLOK-01 and another model KLOK-02 going, but it ended up raising over EUR 600,000. With the experience of the first campaign behind them, they launched a second round in 2017 simultaneously on Kickstarter and Indiegogo, with similar financial results. KLOK-08 is being industrialized and it is expected to be delivered at the end of 2018.

From a marketing perspective, the whole brand is built up very well with a cool product that one can easily identify with. The lively video reflects the founder and artistic director Nicolas Boutherin’s intention to be at the crossroads of fashion, design and watchmaking. ‘Without taking ourselves too seriously and by doing things with pleasure and humility, we go further with the idea of fashion and watchmaking; we talk about a way of life, a philosophy. Beyond the challenging design and state-of-the-art technologies, we question our relationship to a fast-paced society which often forgets the most important things’, adds Richard Piras, co-founder and general manager. 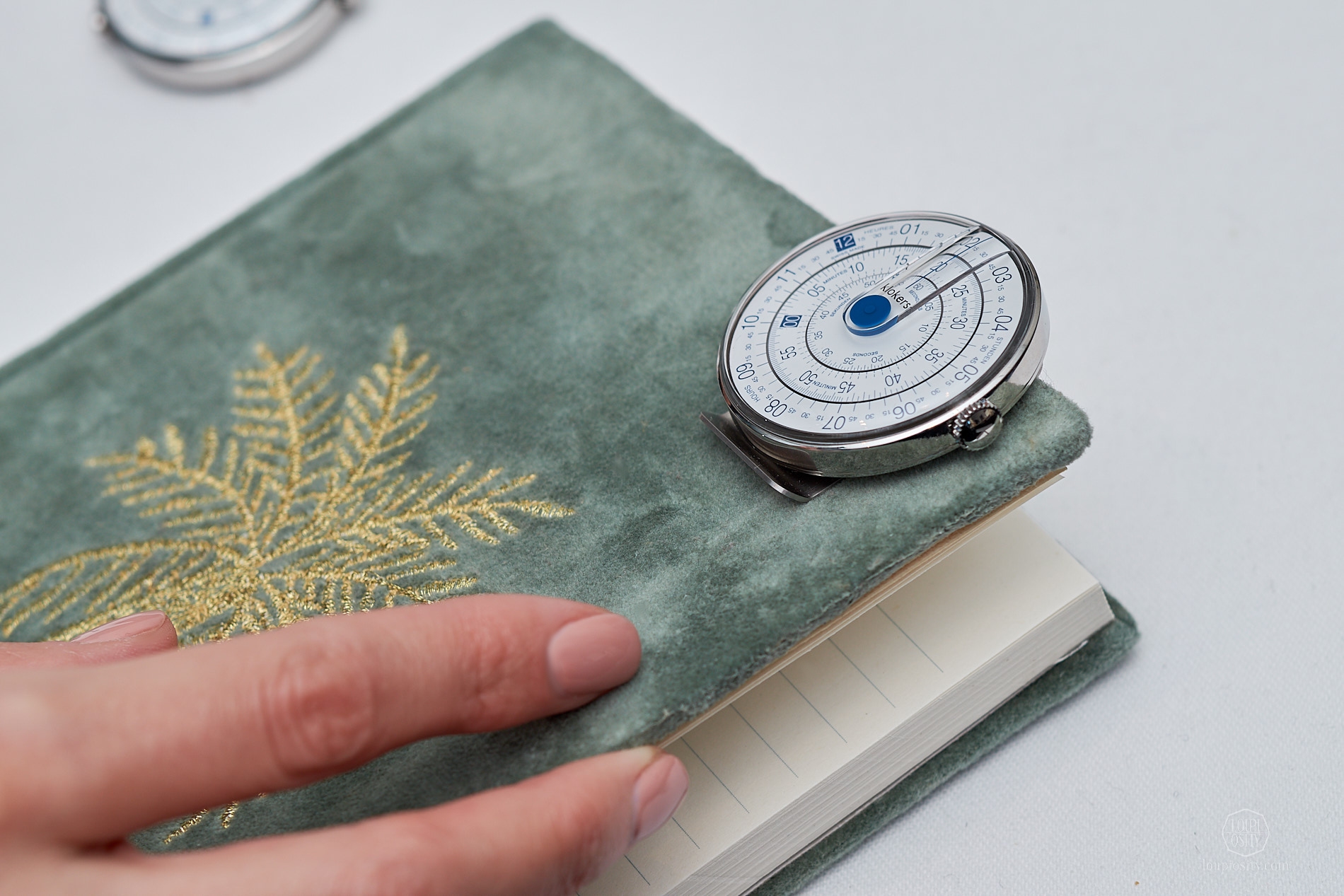 The core design concept is interchangeability, provided by a ‘watch-head’ with a patented fixing system ‘the klokers key’, which lets the owner to wear the piece not only on the wrist but also on the vest-pocket or attached to a diary or by standing it on the desk. klokers offers many different bracelets, such as a steel Milanese strap and a silver bangle, colourful leather straps in different sizes as well as other accessories including the klokers key. Recently, a pocket watch conversion set created by the Milanese leather company Il Bussetto was added, called the klokers Bell. It is made from hand painted vegetable tanned cow leather. Affirming klokers’ positioning, it was presented last year at Pitti Uomo in Florence, the most important international event for menswear and men’s accessories.

The watch collection now includes the revised model of the first model KLOK-01, the KLOK-02 (on-hold now) and the KLOK-08 on pre-order. 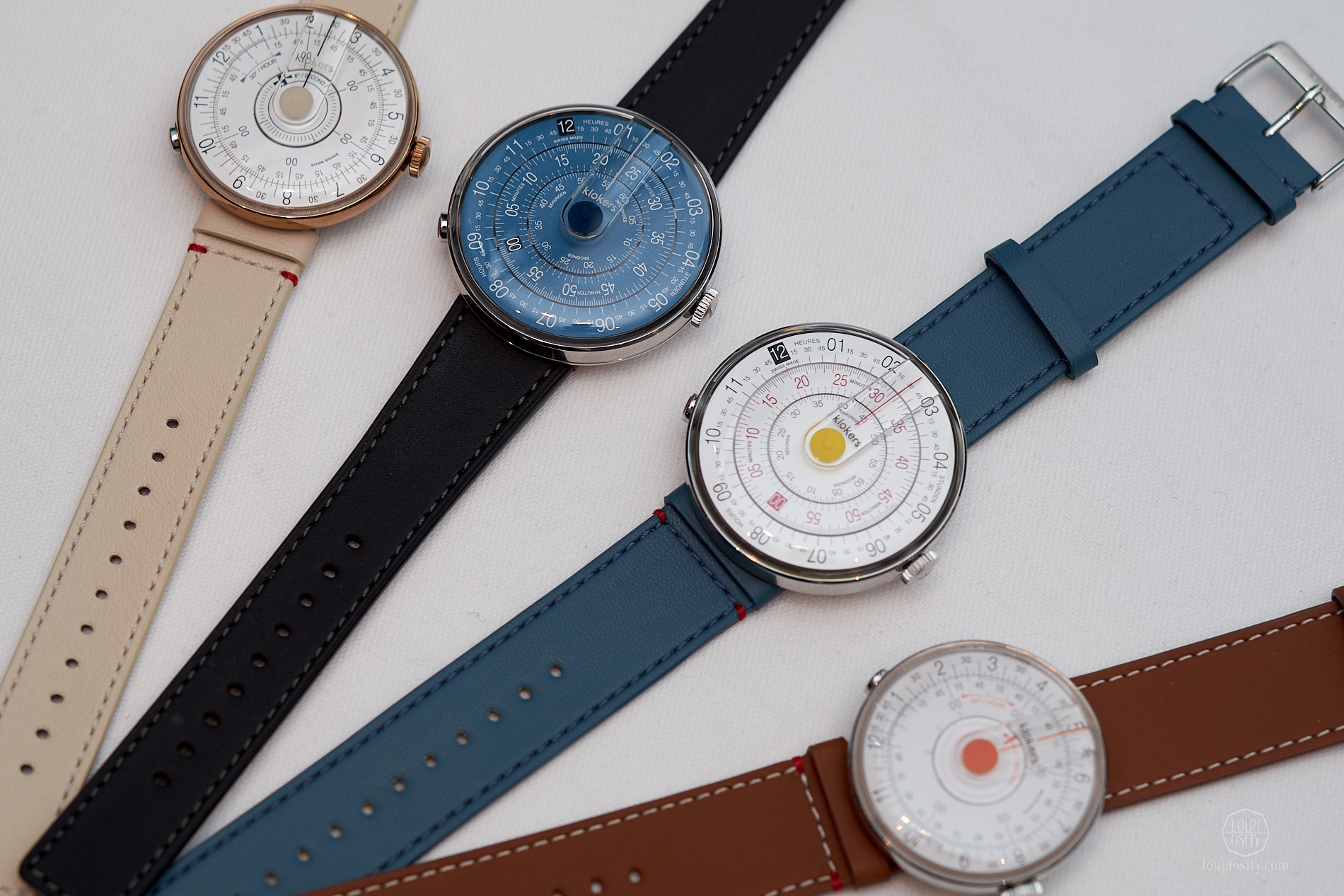 Telling the time à la klokers is a little different – in the case of KLOK-01 there are three concentric discs – one for the hours, one for the minutes and one for the seconds. They turn anticlockwise to show the time along a central vertical axis (patent-pending solution). The watch features a 44mm metal-polymer composite case and a Ronda quartz movement inside.

It is child’s play to change the strap; with a pushbutton at 8 o’clock you can unlock the watch head from its bracelet or accessory and click it to another one. 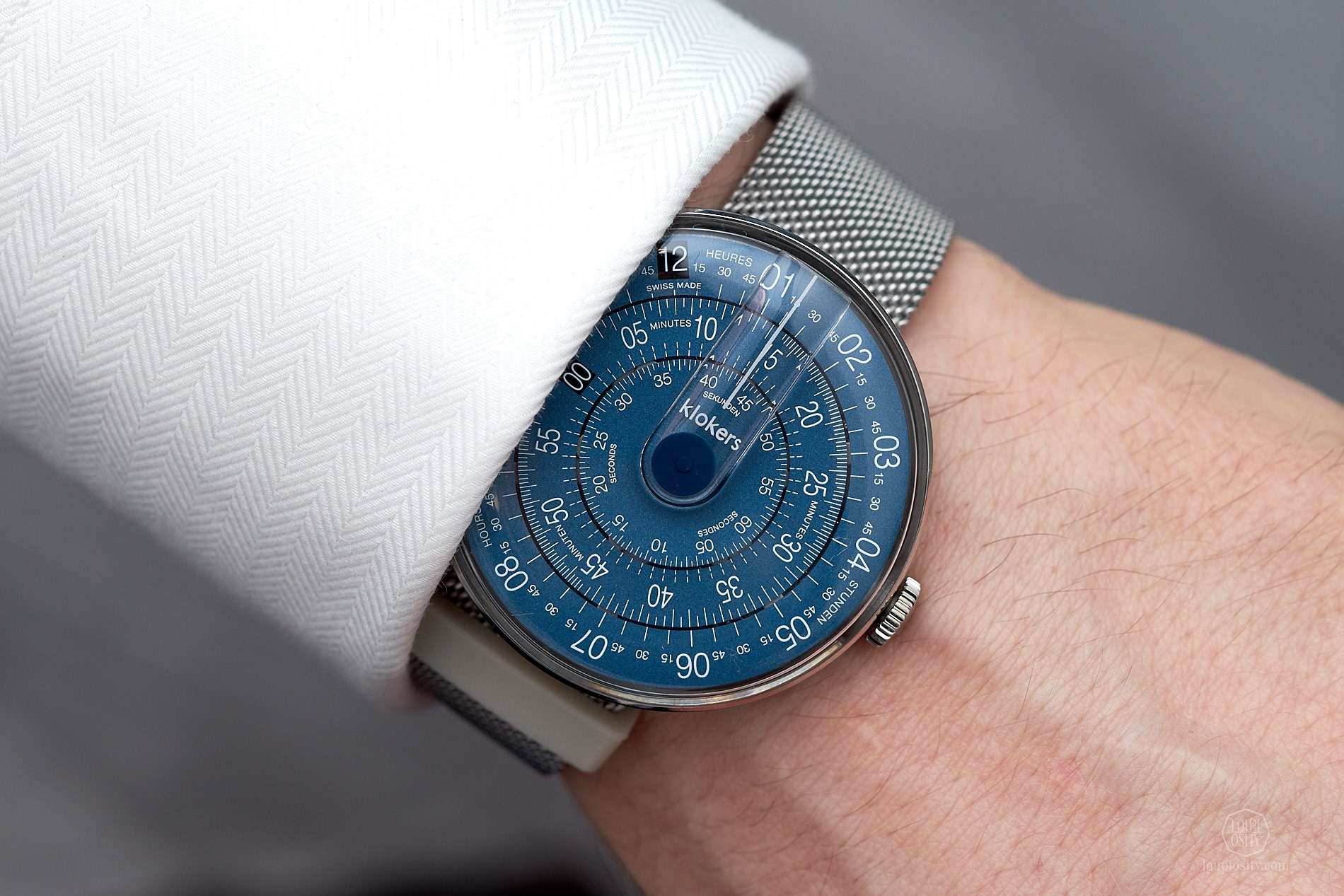 Beyond the marketing and design success, producing the initial piece brought much experience to the team. I asked Mady about the main learning points they distilled. ‘Kickstarter remains the privileged place to develop new products for klokers with the support of our community. We are totally aware that the first version of the KLOK-01 launched on Kickstarter three years ago had some weaknesses to be improved. But thanks to the feedback of the community members and a listening team, klokers has set up a continuous improvement program. Kickstarter is a particular place. We also have set up an efficient and reliable customer service, our clients may send their watches to be exchanged or repaired under warranty.’

Did you apply changes on the initial KLOK-01 model?
‘Yes, we produced since last August 2017 our latest version of KLOK-01 with significant improvement. Some key elements have been changed such as the disks and their connection with the watch movement. A patent is currently on-going. KLOK-01 is much more resistant to shocks and daily activities today.’

How about the KLOK-02?
‘The first KLOK-02s have been delivered. Those KLOK-02s met our quality requirements of the label Swiss Made. All these are sold-out at this time. As the latest manufactured KLOK-02 did not meet those same levels of quality required, we decided to put them into standby production to improve this to ensure that our client will have the best quality products possible.’

The new pieces took the spirit of the Sixties. One of the feedbacks the company received from the backers of KLOK-01 was that the polymer glass can get scratched easier. For someone with an active lifestyle this is not an option, therefore KLOK-08 can be ordered with sapphire-glass. The production processes and partners have also been revised to improve performance and quality. ‘We have learned a lot from our first Kickstarter campaign. We have gained a lot of experience in terms of industrialization. klokers now works with established industrial partners’, says Mady.

Concentric disks remained but were reduced to two: one for the hours and minutes and one for seconds. Just like before, they turn anticlockwise and show the time along a vertical axis. With the smaller case (39mm) the brand clearly targets a broader audience.

Having seen klokers on photos around the Internet, we were was excited to touch the pieces myself. It is an exciting concept with a great design and we enjoyed having them on. I think it fits many wardrobes and lifestyles.

The KLOK-08 is scheduled for delivery between September 2018 – March 2019 for the backers on Kickstarter and Indiegogo. 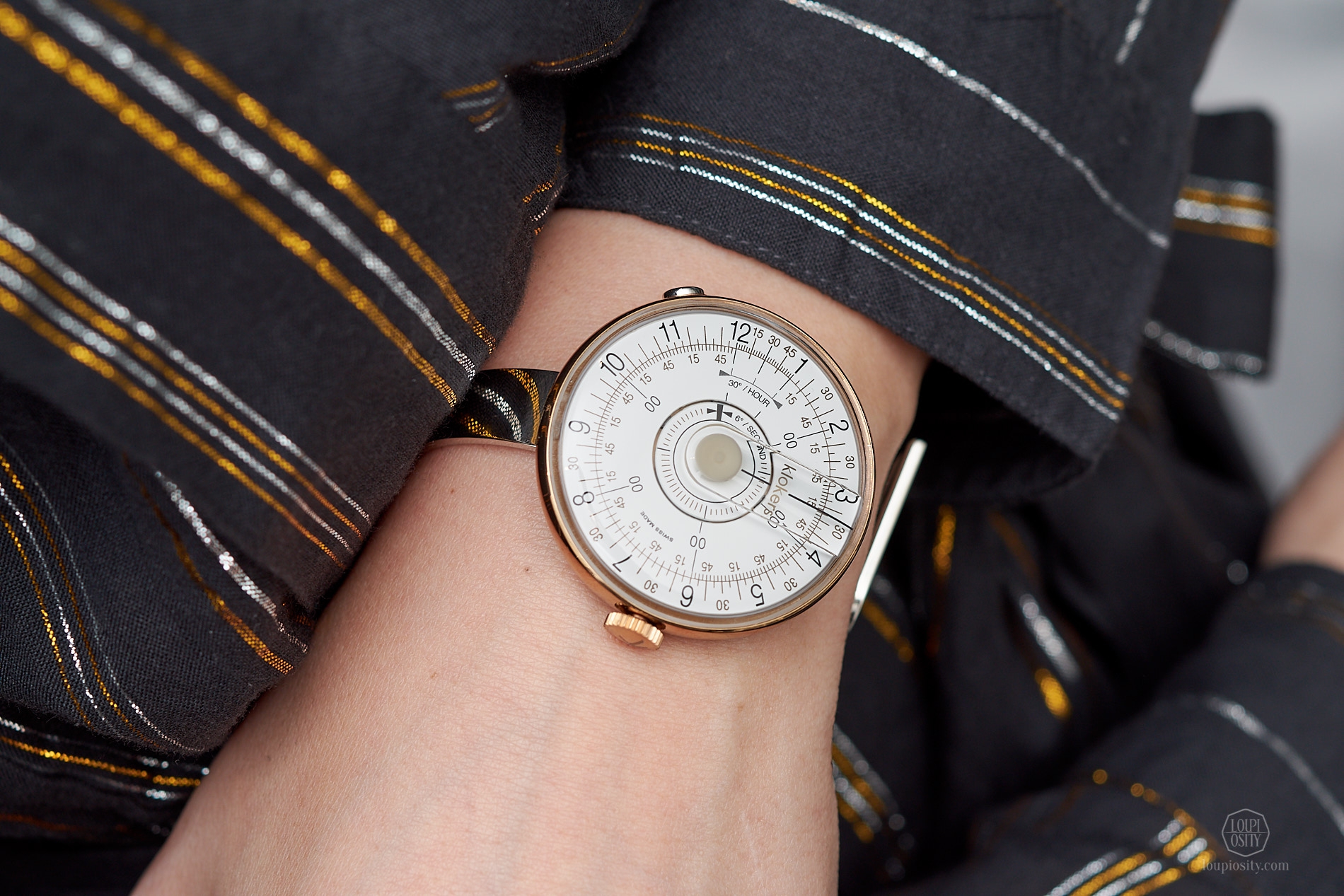 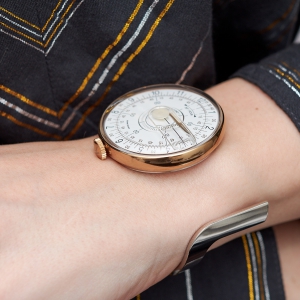 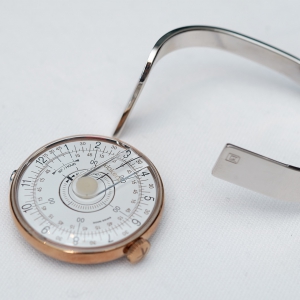 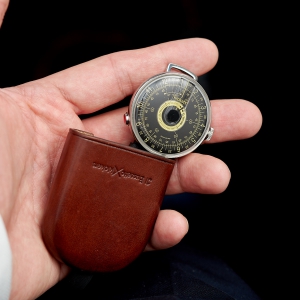 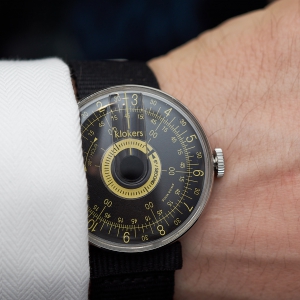 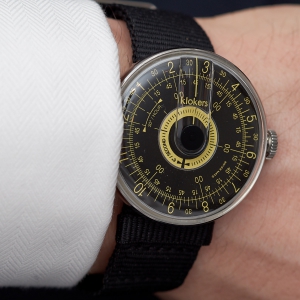 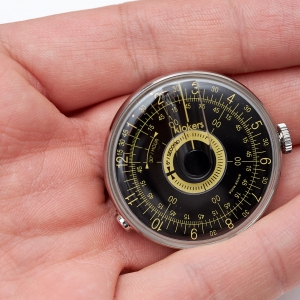 Time to Draw - with Ressence and Sotheby’s Ressence and Sotheby’s are joining forces against the coronavirus and launch a competition to design a unique watch and support a covid-19 research programme.Only Watch 2019 at Christie's Following the preview of the one-off dedicated pieces of participating brands from 7-9 November, the 8th edition of the biannual Only Watch charity auction is about to begin at the Four Seasons’ Hôtel des Bergues in Geneva.Cross if you dare - Czapek & Cie’s Antarctique Passage de… Following the success of its Antarctique Terre Adélie collection in May Czapek & Cie. just launched the Antarctique Passage de Drake watch line. We previewed the new pieces in Geneva.