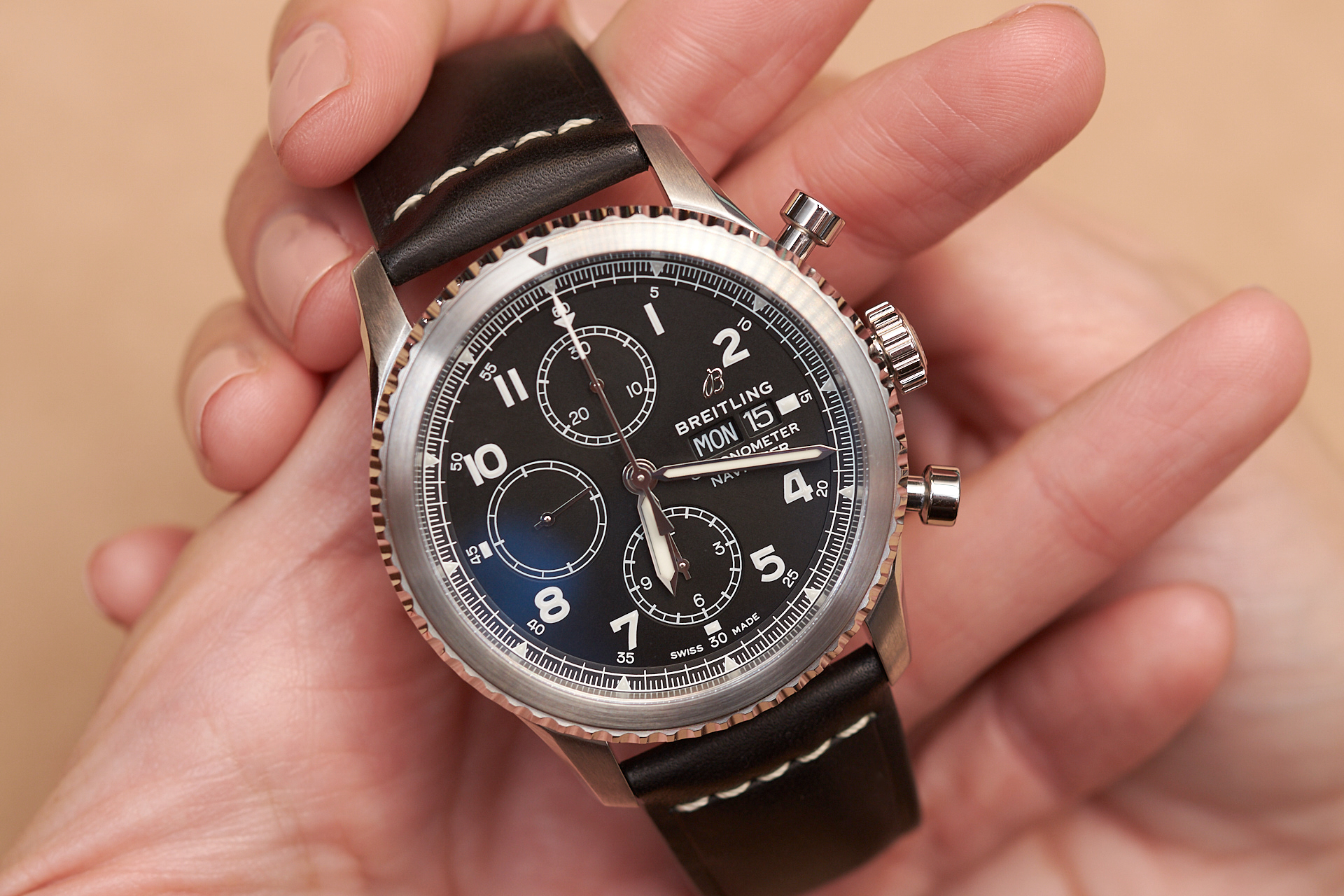 Following their recent intercontinental road show for presenting the new corporate image, Breitling arrived to Basel with the first novelties born under the new ownership and the revised strategy. Emotions and critical voices have been raising since the financial investor took majority shares in the company, therefore we were keen to understand the changes we can expect from the watch manufacture. We visited Breitling at Baselworld.

It was almost a year ago when the private equity firm CVC acquired the majority (80%) of Breitling SA from Theodore Schneider (20% remained with him). The company, among the last independent family-owned Mohicans of the historic Swiss watchmaking era, has been taken over by the fund in a state with almost a decade of under-performance behind them. Back in 1979 when Theodore’s father Ernest Schneider took over Breitling from the founders, the company had already gone out of production laying off its 24 workers. Although the situation today is not quite as tough as 30 years ago, but putting the firm back on track again might require similarly draconic measures. Then it was the employment of quartz at Breitling that turned the boat around, today it could be the consolidation of the product offering and the revision of the go-to-market strategy – either way, they both have naturally evoked intense emotions. The difference is that while with the Schneiders it was a family take-over with goals of a single individual (and later his son’s), today’s targets are set by a mixture of financial and private investors.

So what are these goals altogether?

Being a financial investor CVC’s end-goal would normally be an exit of some sort. They must increase the value of the ‘package’ in order to be desirable for a future owner. Based on their portfolio, CVC brings a good knowledge of financial and operational restructuring skills on board, but they are ‘outsiders’ in the luxury segment. Financial decisions in such a highly emotionally-driven industry are not the only things you need for success, hence CVC hired someone who has lived and breathed watchmaking but also has the dynamism required for delivering change. CVC approached Georges Kern who has already proven his abilities at IWC between 2002-2017 by supporting his private entrepreneurial goals and offering him shares (cca 5%) in Breitling. Thus what he could probably not have achieved at Richemont, Georges Kern as CEO co-owner became personally interested and invested in Breitling’s success. Just like some of his team members who also received shares. So, the interests are there although very different from those of the previous family business.

In the last 130+ years, Breitling has earned a very high reputation and a strong product image. Their innovations contributed to the developments of chronographs and famous models such as the Navitimer raised their own fan clubs. It’s not easy to touch a brand like this. At our meeting at Baselworld, we talked about their top short- to mid-term priorities. 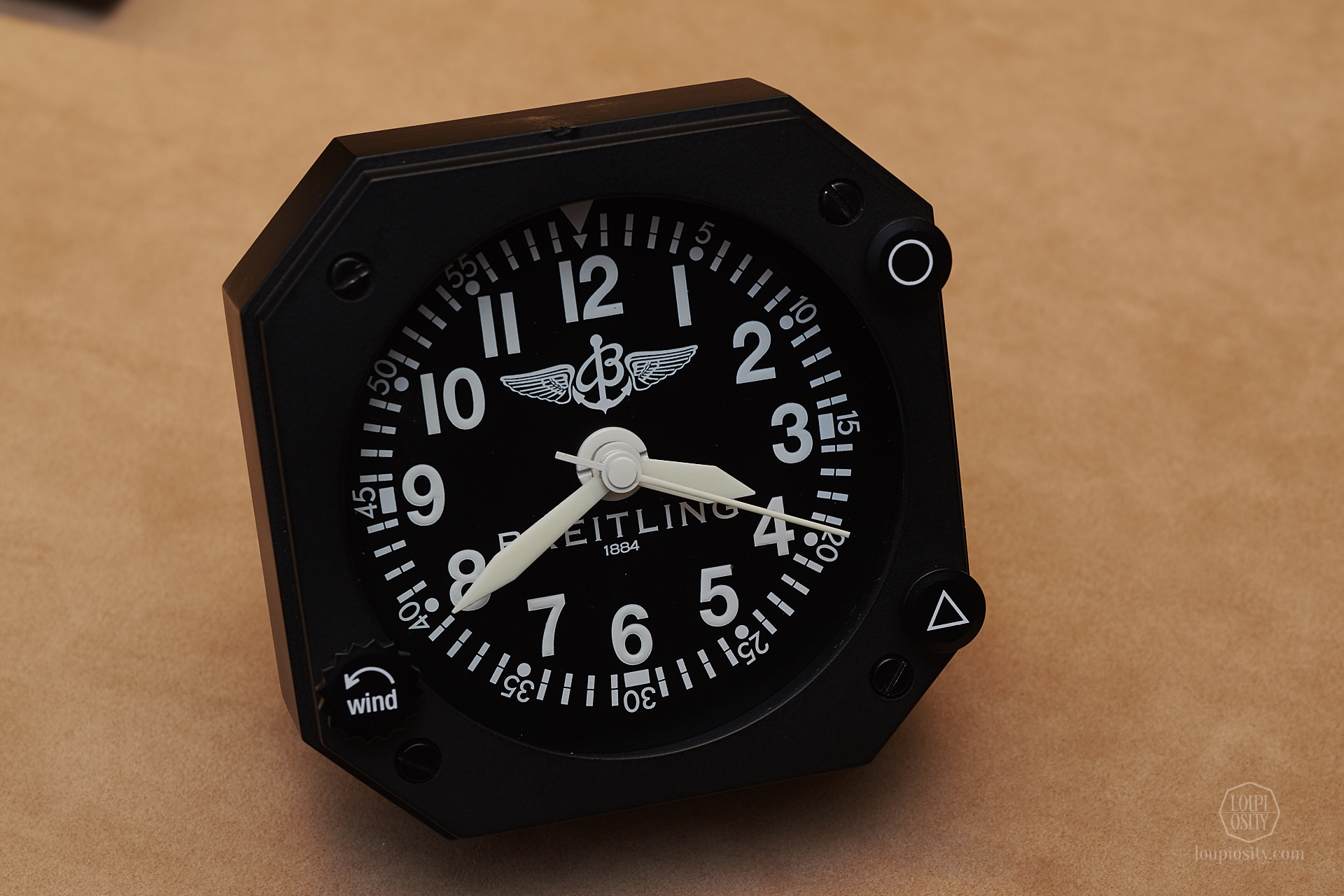 Today there are nearly 650 references, some of them with just minor differences. Collections have also been too abundant, which made it challenging for customers and even retailers to navigate. The new management wants to focus on better product management, which considers the changing consumer preferences and is easier to oversee. They plan to bring down the number of references to 120 and organize them into 5 main themes: air (Navitimer), land (Transocean), sea (Superocean), universal (Chronomat) and performance (Professional). Eliminating over 80% of the references means that they will discontinue models and limit the available variations while maintaining (and even slightly increasing) the current 145,000 unit / year production volume.

Previous collections were included in these 5 themes – for example the Avenger in the Chronomat collection. New product lines however would refer to the main collection’s name. This happened with the fresh Navitimer 8, which probably insulted most Breitling fans who argued that it doesn’t have anything in common with the original Navitimer 1. They are truly distinct, yet they both fall under the ‘Air’ theme, hence the collection is the same.

Collaborations like the one with Bentley or the recently announced Norton Motorcycle might result in multiple models across different collections depending on the theme of the actual watch. Most models will target the EUR 3,500-8,000 range, which means that Breitling will withdraw models in the sub- EUR 2,000 segment.

Breitling’s brand has clearly been built on a manly and testosterone-filled image, selling to men with pin-up girls. Their parties at Baselworld were legendary. I do not think that it is an issue making watches to a certain niche only, however the style that worked a few decades ago might not conform with the ‘unboxed’ roles of today. Companies wanting to be successful cannot simply ignore the ongoing changes. Mr Kern slashed the parties and is moving away from the sexist image, which does not mean that the watches would be less hot.

As you can see from the collections, aviation and the sea will be just two of the 5 themes. Therefore, the new branding brought the old-new B logo back to the watch face and omitted the wings and the anchor. Boutiques will be refurbished according to the new image too.

Just before Baselworld, Breitling announced its new Breitling Squad concept. The idea is to create squads whose members are recognized masters in their respective professions. Based on the dynamic values of Breitling – action, purpose, and pioneering spirit – they formed the Cinema Squad (Brad Pitt, Charlize Theron, Adam Driver, and Daniel Wu), the Explorers Squad (Bertrand Piccard, David de Rothschild and Inge Solheim) and the Surfers Squad (Sally Fitzgibbons, Stephanie Gilmore and Kelly Slater). ‘At Breitling, we believe in the power of a team, the strength of a group, and the mutual identification of a common target, which ultimately leads to success,’ says Georges Kern.

Men in the USA and Europe have been a traditionally strong segment for Breitling. The image and the product offering (especially the large sizes of the watches) more or less excluded women as potential buyers. The latter also made it hard for Asian customers to go for Breitling. These two groups hide tremendous growth potential.

The company plans to introduce new models in all collections for smaller wrists and even come out with pieces dedicated to women. Other popular sub-areas in the main collection themes such as sailing or scuba diving will later receive new models too.

Over half of the current sales happens through independent retailers. In order to better control the representation of the new brand on the market and to reduce Breitling’s appearance on the grey market, the company will manage the sales to retailers more directly and will reduce the number of sales points (currently there are about 2000 globally). Digital is also bold in Breitling’s sales and customer servicing strategy. Watches will appear in carefully selected 3rd party online stores.
Breitling also considers supporting the pre-owned watch market by helping retailers to trade-in pre-owned timepieces for new ones.

Touching the icons is never easy. As highlighted before, the Navitimer now is the cumulative name for ‘Air’-themed watches, which naturally includes the previous Navitimer 1 family, but has been extended with a new line called Navitimer 8.

Inspired by the aircraft board instruments Breitling Huit Aviation Department developed in 1938, the Navitimer 8 brings a somewhat softer design into the airborne family. As Guy Bove, Creative Director described it: ‘From a design perspective, it occupies a unique position between Huit’s onboard clocks and the Navitimer.’ The notches on the bezel, the dial and the Arabic numerals are inherited from the old technical instruments.
The company introduced five new models with a mixture of in-house and Breitling-modified movements: two chronographs, a travellers’ watch, a date & date and a time & date models.

As the name suggest, the Navitimer 8 B01 is equipped with the manufacture chronograph movement B01. It is a close to a decade old calibre, which operates in many Chronomat, Navitimer and Transocean pieces (and the same one that is traded with Tudor for their MT5612 automatic movement). It comes in stainless steel with a black or blue dial, or in 18k red gold with a bronze dial. All have silver colour brushed chronograph sub-dials. These sectors appear tone-in-tone on the black or blue dial and 90 degrees rotated in the Navitimer 8 Chronograph. The black version is also available in DLC-coated steel case, looking pretty nasty. Inside is the COSC-certified Breitling Calibre 13 (based on ETA Valjoux 7750). All chronographs come in a 43mm case. 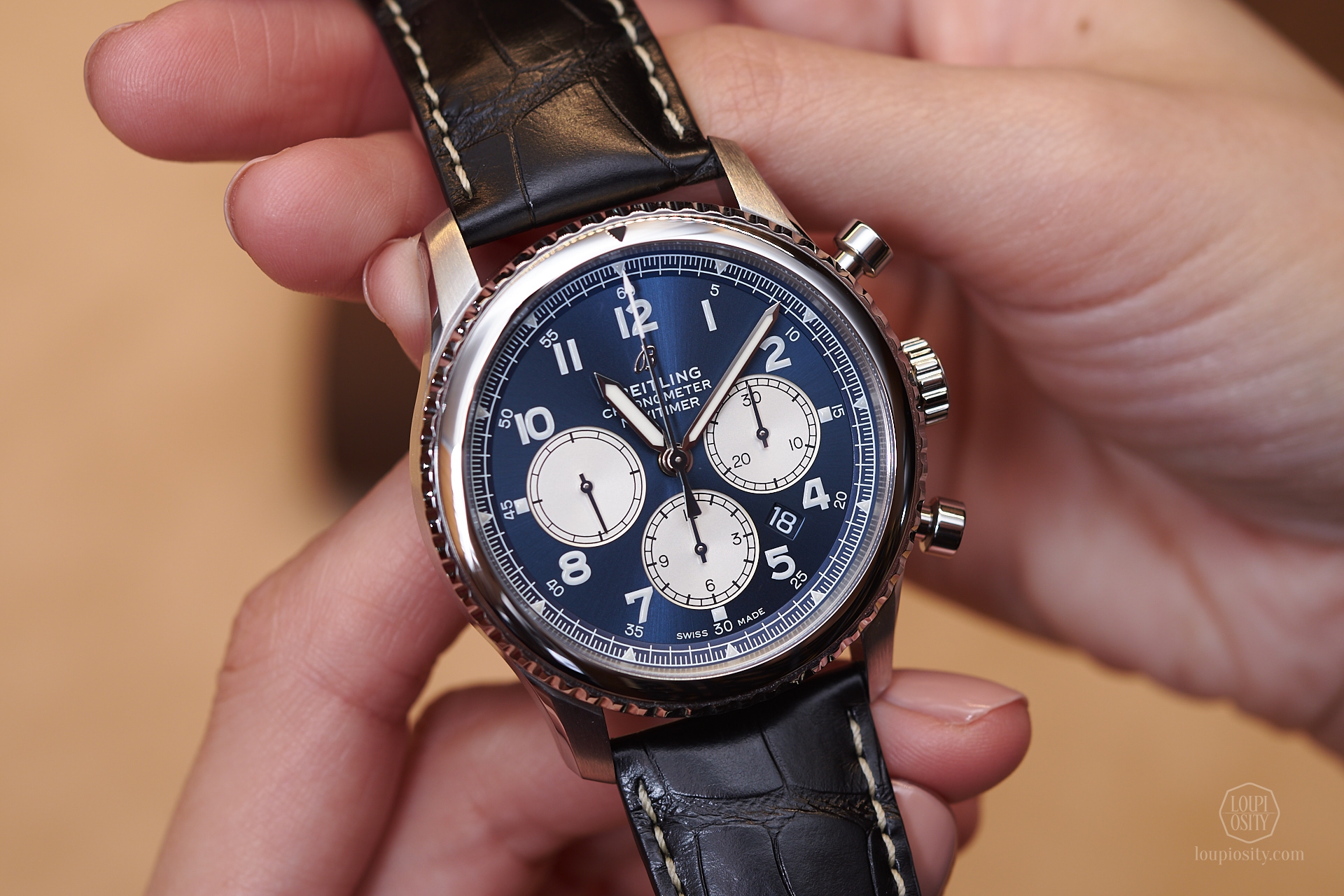 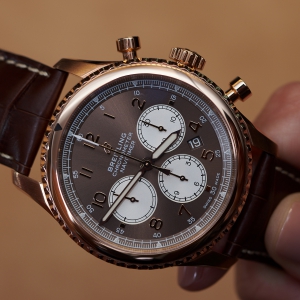 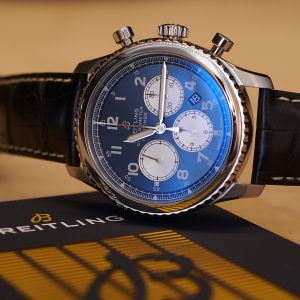 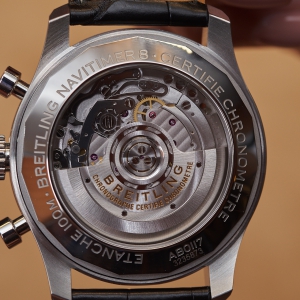 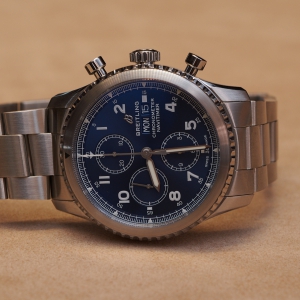 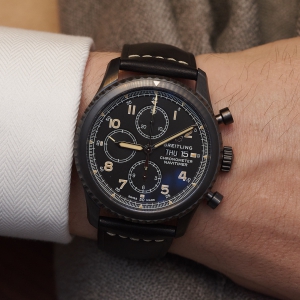 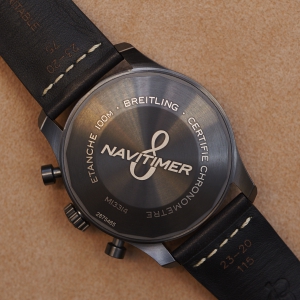 The Navitimer 8 Unitime was made for frequent travellers by an easy-to-adjust and read local-time / world-time indication. Turning the crown will set the local hours by discreet jumps and rotate the world-time ring on the periphery at the same time. The movement behind this feat is the B35, which is Breitling’s extension of the ETA 2892-A5 calibre with their own world-time module. The brushed dial comes in two colours: silver with blue / grey world-time hours ring and all black. 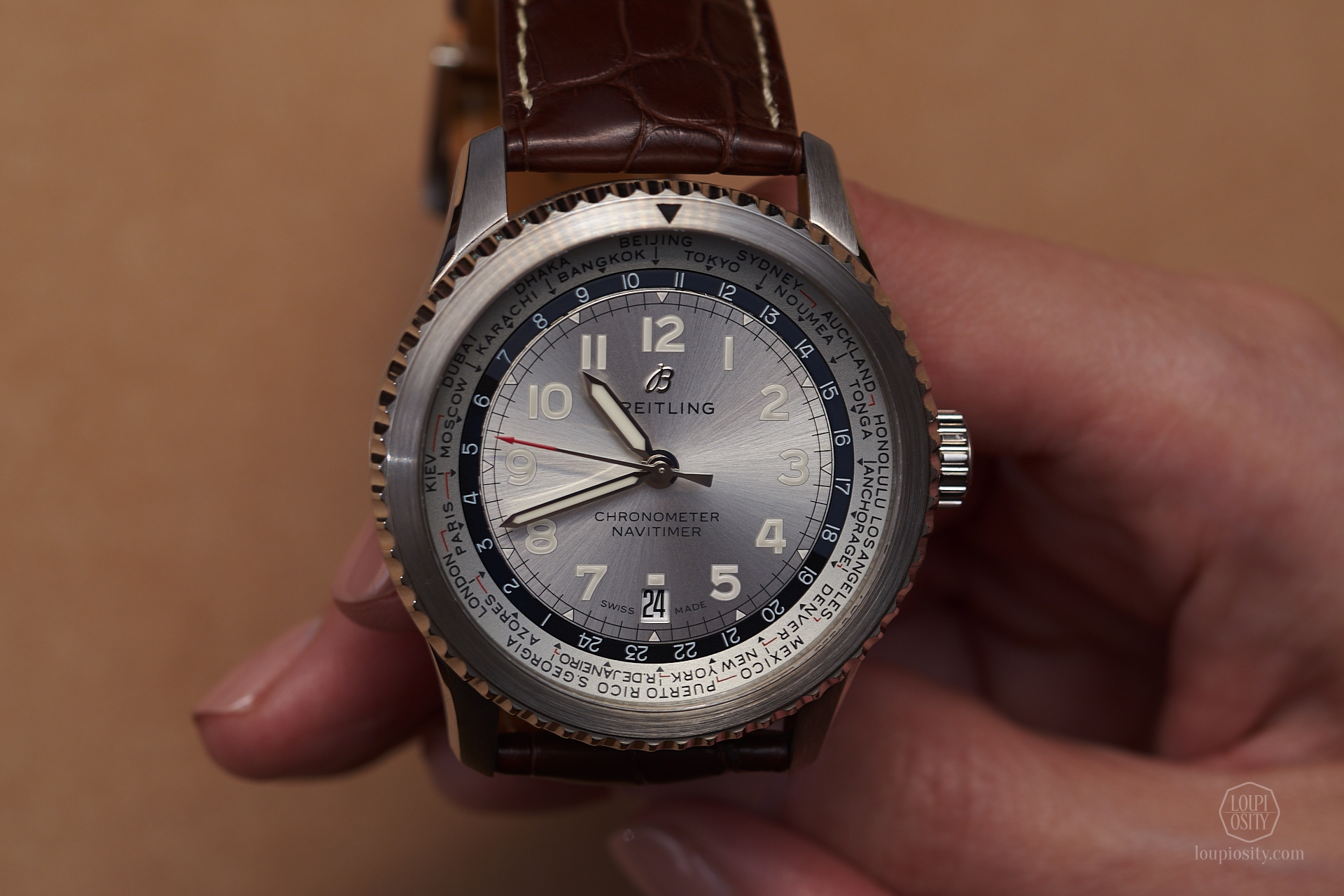 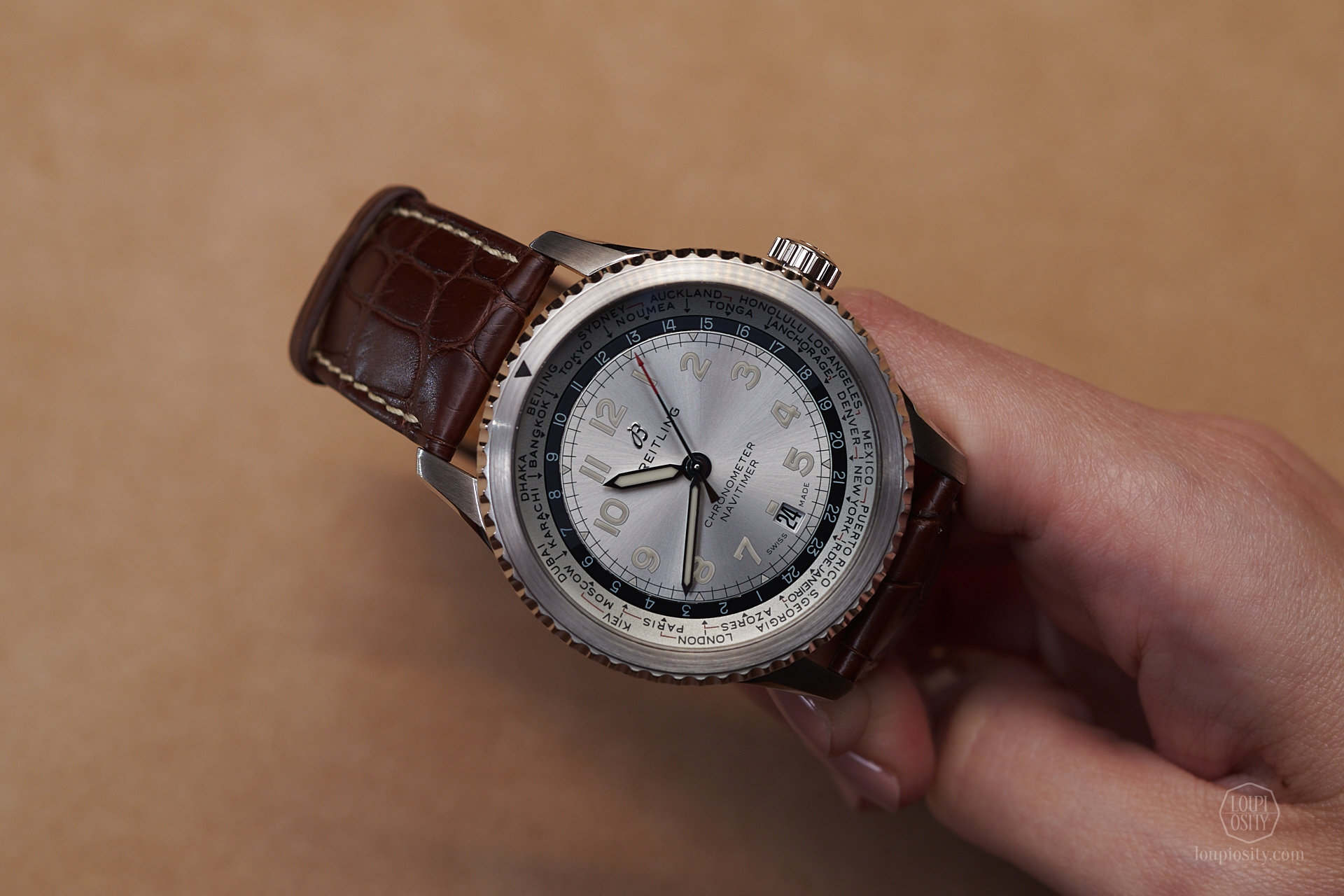 On the simpler and smaller side, Breitling presented two 41mm models. The Navitimer 8 Day & Date and the Navitimer 8 Atomatic offer the blue and the black dial options. I particularly like pairing this tone of the blue with the black leather strap. Just like at the Chronograph, the simplest black Automatic timepiece can be ordered with DLC-coating. 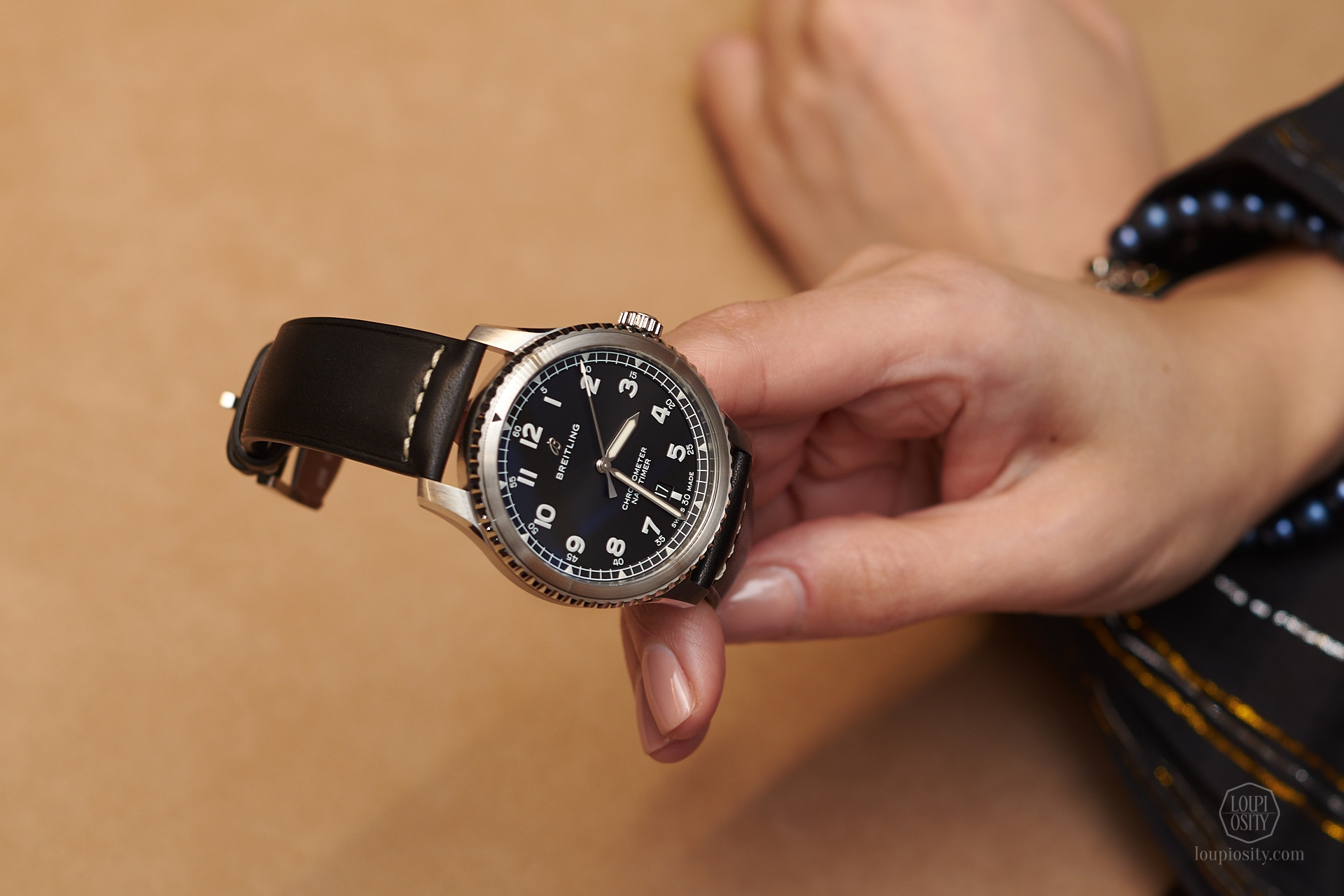 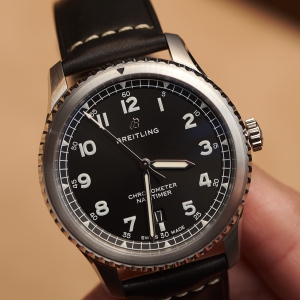 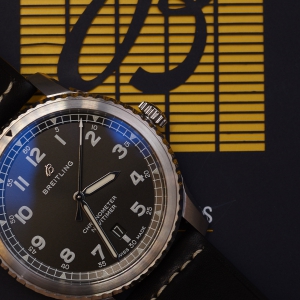 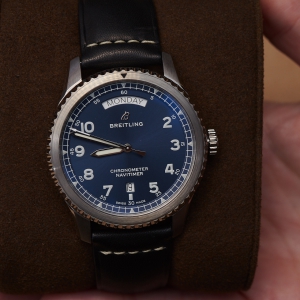 To highlight their commitment to the original Navitimer, the company brought out new versions of this line too. It is interesting though that they introduced only a few larger (46mm) references while five smaller (43mm) and four even smaller (41mm) chronographs were issued, which points again to the direction of broadening the scope of potential customers. The 43-46mm versions come with the B01 movement, while the 41mm version has the same Calibre 13 inside as the Navitimer 8 Chronograph and the sub-dials are also rotated here.

The Navitimer 1 chronograph on 41mm might be a bit too dense I guess, but this is when another novelty steps in with style. My favourite this year was the Navitimer 1 Automatic 38, which is a simple automatic timepiece in a Navitimer dress. It looks great on ladies’ wrist, so we included the piece in our “Girls don’t just wanna have fun” series. Please read about it more here.

Breitling has a character made up by innovative technical solutions, and a very recognizable design palette. With the acquisition, it certainly started a new chapter in its life. Preserving its identity while adding more to its personality is a challenge that requires good senses for balancing. Compared to last Baselword, which was in the middle of the negotiations, we felt more certainty in people in terms of what direction the company would take. Now we saw the first steps, including the new models and people we met at the booth as well as retailers seemed to be honestly positive about the changes.

There are still many questions, of course, but the next 12 months will shed light on most of them. Breitling just announced their participation at Baselworld 2019. 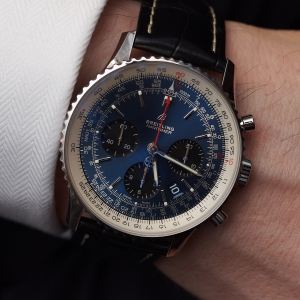 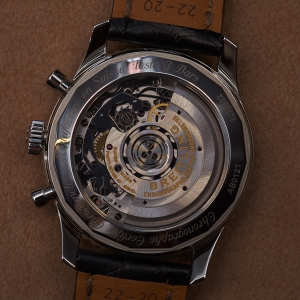 Photo credits: Breitling/PPR, Loupiosity.com.
All registered trademarks are property of their respective owners.
All rights reserved.