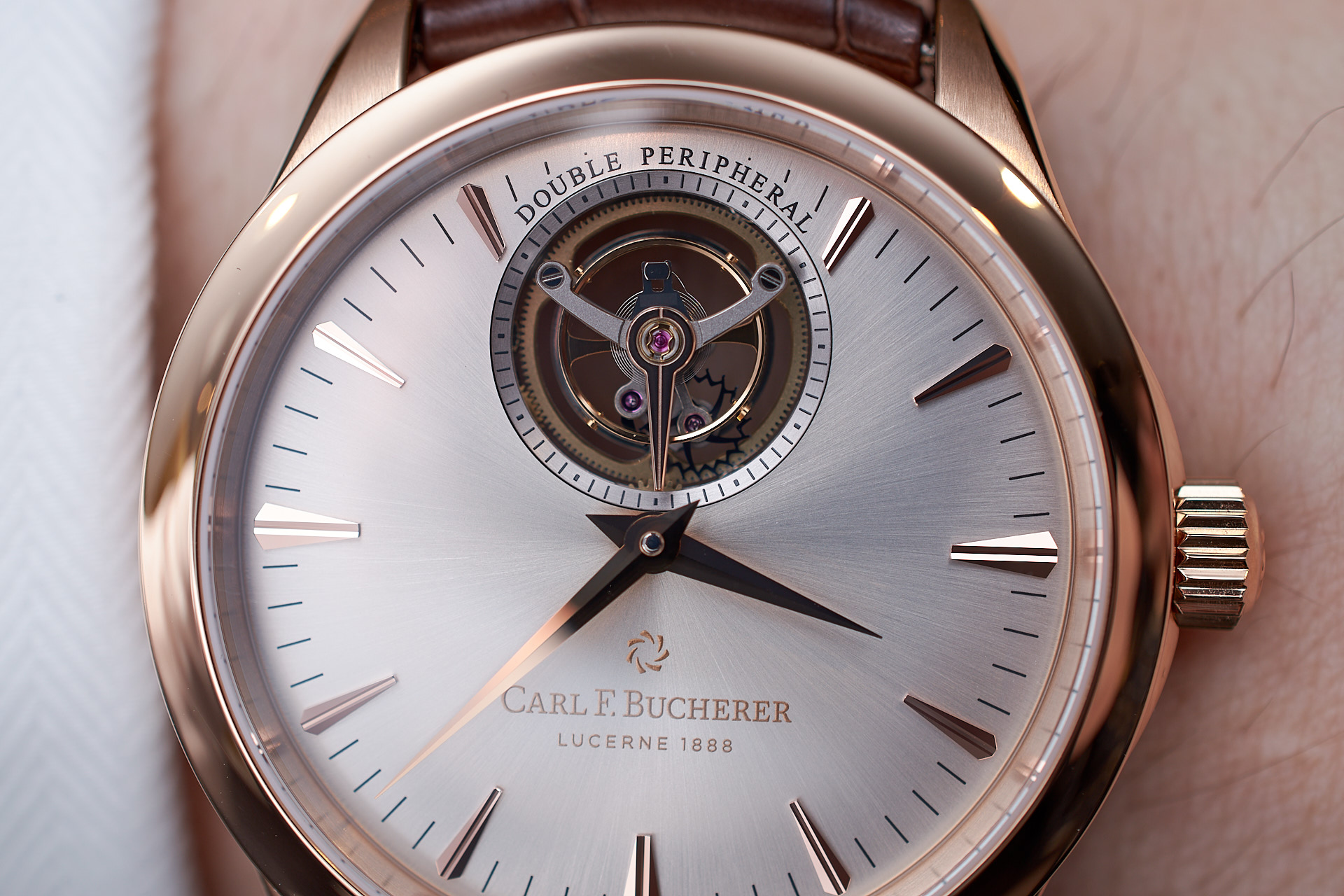 ‘Nobody has a peripheral system like we do. We want to be the leader in peripheral technology.’ – Sascha Moeri started the presentation of the new Manero Tourbillon Double Peripheral with an overview about the strategy behind the piece. We visited Carl F. Bucherer at Baselworld.

My very first encounter with Carl F. Bucherer watches was in my childhood. I spent a few summers in Liechtenstein with my brother at his godfather’s place. He owned two pieces from the brand – I can’t recall the exact models, but one was an elegant mechanical piece with brown leather strap, the other, I suppose a quartz watch from the 70’s. At the time I had no idea about watch brands, but they considered them precious and therefore the company’s name somehow stuck in my head.

Anyhow, for many years I did not consider the brand as a cool or youthful company – I associated it with the kind strictness and seriousness of our beloved Liechtenstein relatives. Fast forward to the end of 2014 when I met the name Carl F. Bucherer again; this time in Vienna. It was the Patravi ScubaTec at ViennaTime that showed me what else this mixture of letters could represent. Since then, a growing curiosity has always preceded our encounters and the company has become one of the most interesting ventures to me.

It is not just the timepieces that have a character with mojo (one of my favourites was the Manero Flyback from last Baselworld, the steel bluish-grey version with a light grey Louisiana alligator strap), but perhaps even more the team’s ability to address and converge various age groups. Watches and campaigns seem to be born according to a strategy that goes beyond what the next collection should be. They like to be associated with sports events and teams, such as the recent Baikal Ice Marathon or the Swiss women’s national football team and the men’s league, as well as the ocean conservation work of The Manta Trust.

Carl F Bucherer is surprisingly comfortable with using the social media channels too. They collaborate with bloggers and influencers and the CEO, Sascha Moeri, takes his part in the game, big time. He was among the first corporate heads in the industry who reached out to people with Instagram accounts (and he does it really well) and he maintains a good relationship with the digital media. He is in the small minority of CEOs who dedicate time to converse with both online and offline media and personally makes the effort to shape the image of the brand for the positive.

This is exactly what he did at this years’ Baselworld too.

Proud and happy to celebrate our 130th anniversary and decided to wear our timepiece not only on my wrist! #CarlFBucherer #Anniversary #Suits

Leading up the product presentation he gave an overview about the company’s recent activities and how the novelties fit into the longer-term strategy.

Many brands have started to take bigger control over their retail channels nowadays by reorganising and decreasing the number of sales points. Mr Moeri emphasized that CFB has a large international network of strong retail partners and the company appreciates its distributors. Carl F. Bucherer currently has mono-boutiques in Lucerne, Moscow, Shanghai, Hong Kong, Dubai and Mauritius. ‘We open boutiques always with a partner. We have less of a margin, but we do not want to kill the business after they helped to build the brand.’ – he added.

The European retail giant Bucherer Group (the Bucherer Group / Bucherer AG is the parent company of Carl F. Bucherer) has announced the acquisition of Tourneau in late January 2018. Tourneau is an American retail institution with 28 locations across the US and a well-established online business for new and certified pre-owned timepieces. As Guido Zumbühl, CEO of the Bucherer Group commented: ‘With this acquisition, we will immediately introduce the Bucherer brand to millions of potential customers in one of the most important global watch and jewellery markets. This is also a great opportunity to firmly establish the Carl F. Bucherer brand in the US and introduce Bucherer Fine Jewellery into the North American market.’

Sascha Moeri underlined that the Lucerne-based company remains family-owned and faithful to its original founder’s philosophy. Being still independent is not always easy but allows the brand to react quickly and be more flexible.

In terms of the products and the sales figures he noted that Carl F. Bucherer is now at a very healthy unit number as well as a men’s and women’s model mix. When he joined in 2010, the company produced 6,400 units, 80% of which were for men. With the revision of models and by opening the Lengnau factory the firm reached 25,000 units and 40% of these are for women. In the future, he plans to maintain this ratio and increase the unit number to no more than 29-30,000 (by 2019).

Great brands have certain technologies clearly associated with them. Carl F. Bucherer has invested heavily in perfecting the peripheral winding system, introduced in the 2008 calibre CFB A1000. The rotor construction, which the company managed to work reliably, has become a signature of CFB. Watches equipped with such movements (e.g. the Manero Peripheral with the CFB A2050) race in the very competitive CHF 5-10,000 range. Sascha Moeri made their intention clear: ‘Nobody has a peripheral system like we do. We want to be the leader in peripheral technology.’

Building up the momentum, they came out with the 2018 edition of the aforementioned Manero Peripheral, but also introduced a tourbillon supported peripherally, which gives an unobstructed view to the regulator from the front and back sides.

The big shot this year was definitely the entrancing Manero Tourbillon Double Peripheral with the new CFB T3000 manufacture calibre. The timepiece has a sober face framed in the ‘distinct gold’ of the brand and with the tourbillon on its forehead. The hands and the indexes are razor sharp; this property is further highlighted by the tiny pale lines of the brushed dial. Although simple and humble, every attribute of the look is just as strong as the main attraction itself. 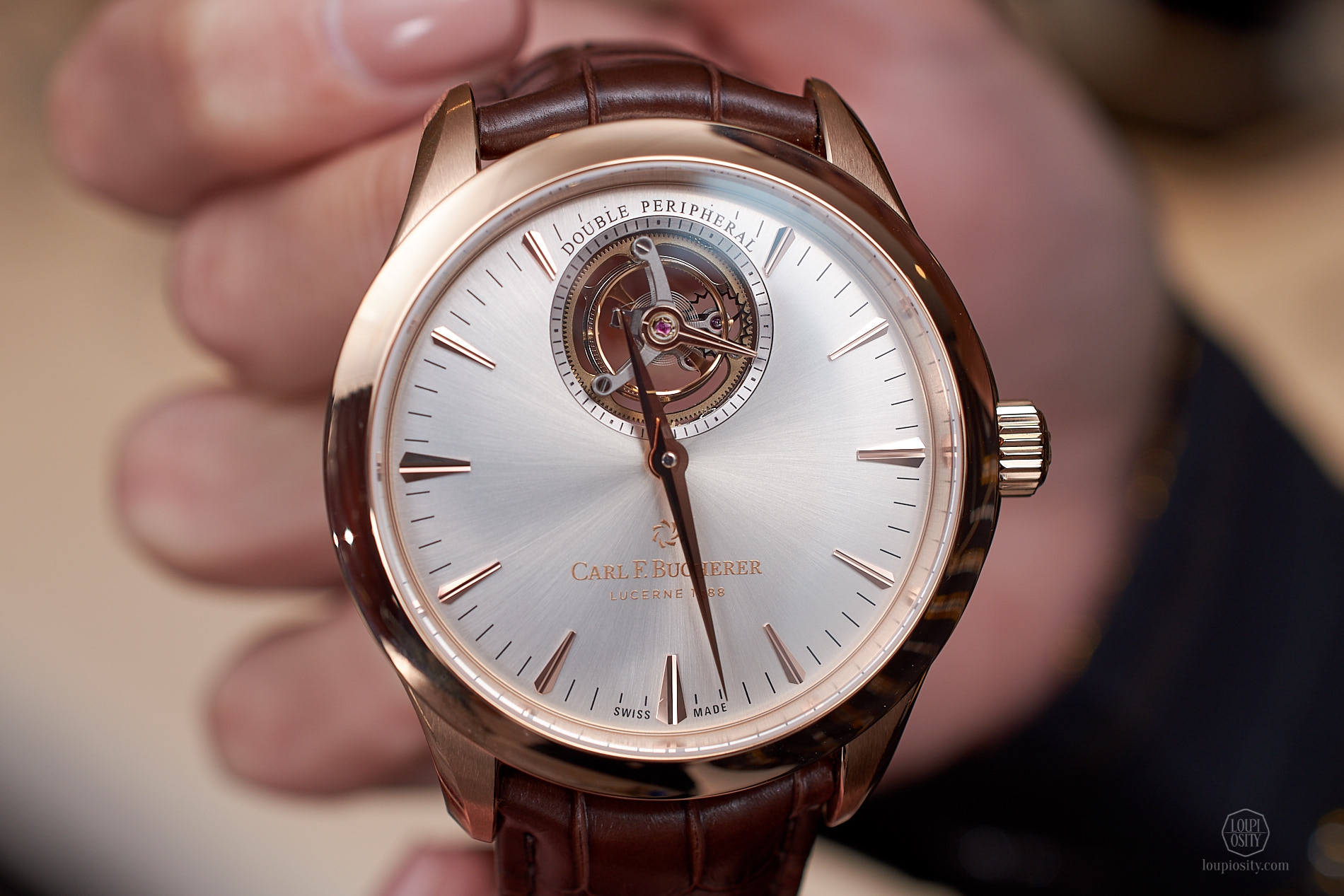 The movement, visible though the sapphire at the back, continues to direct the eyes to the tourbillon by simply covering everything with Côtes de Genève except for the regulator. More accurately, an opening reminiscent to an ant tunnel shows a little bit from the gear train. Its modern shape is in contrast with the elegance of the timepiece. It is not just interesting, but also further stresses the innovative nature of the content. Of course, you can also observe the peripheral weight as it swings with your moves. 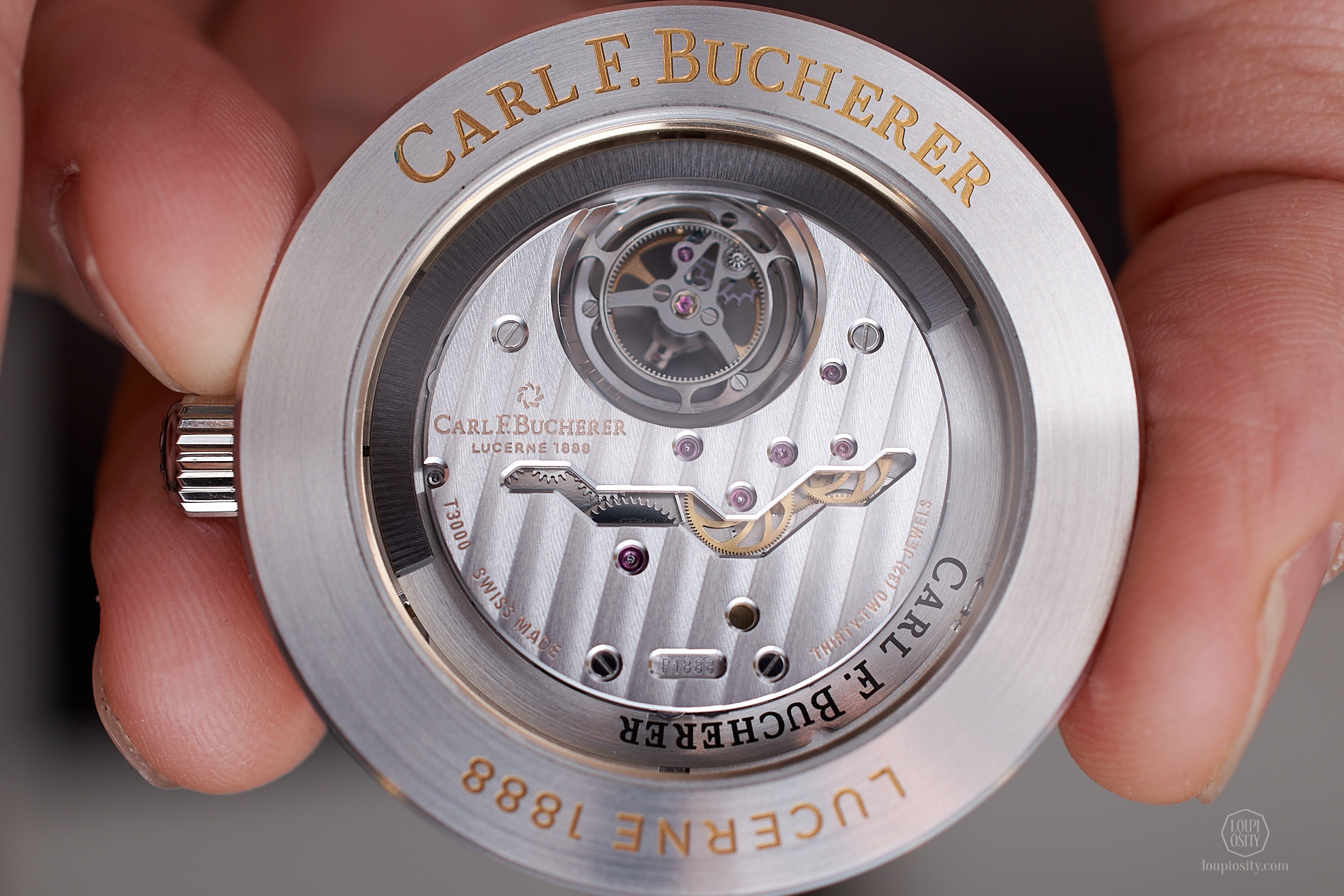 The tourbillon is naked on both sides. There is no mounting to the main plate or to the balance-wheel bridge. The cage is supported by three ceramic ball bearings hidden from the eyes and is driven from its exterior. Carl F. Bucherer used silicon for the escape wheel and the pallet fork. The mainspring on the barrel stores energy for 65 hours of continuous operation.

18k rose gold was used for the 43.1mm diameter case of this awesome piece. This is the same colour as the plated indices on the silver-coloured dial. It comes with a hand-stitched Louisiana alligator leather in dark brown. 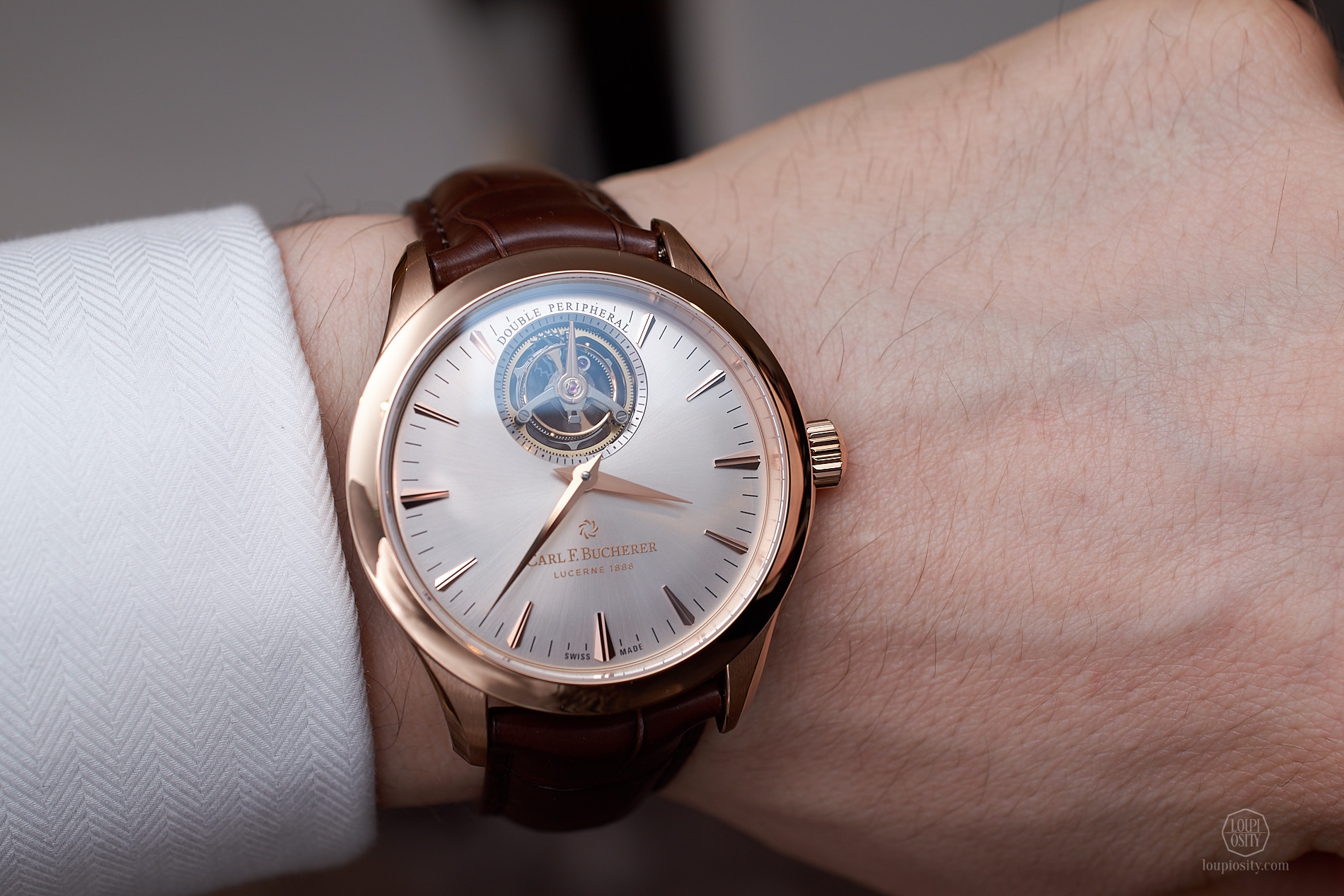 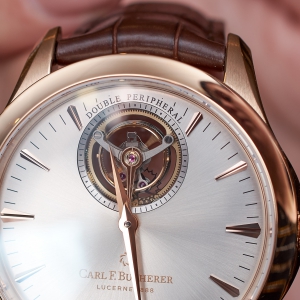 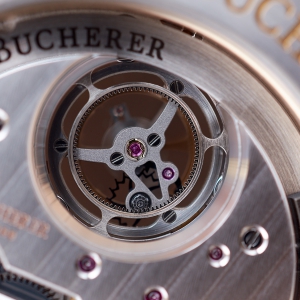 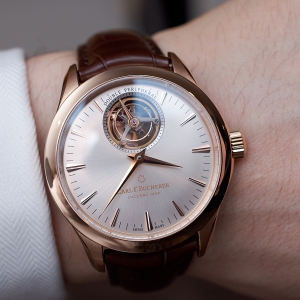 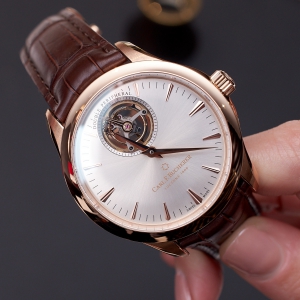 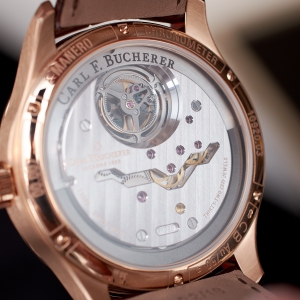 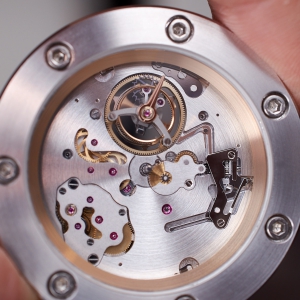 The simple and solid Manero Peripheral brought a very competitive option to those who love quality every-day watches in 2016. New colour options and an increased size arrived in 2018. The previous steel and rose gold editions were 40mm, which have now become 43mm. The calibre is the same CFB A2050 as before. 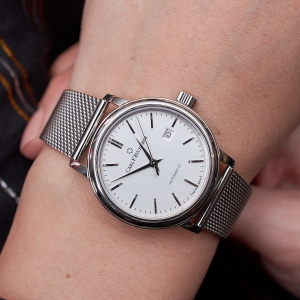 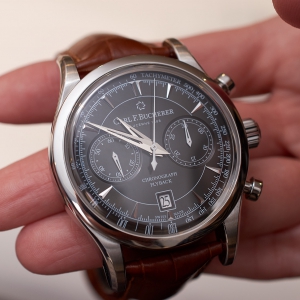 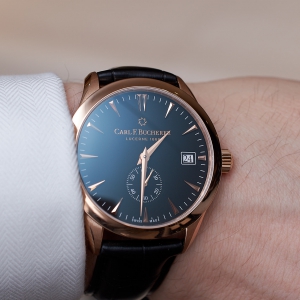