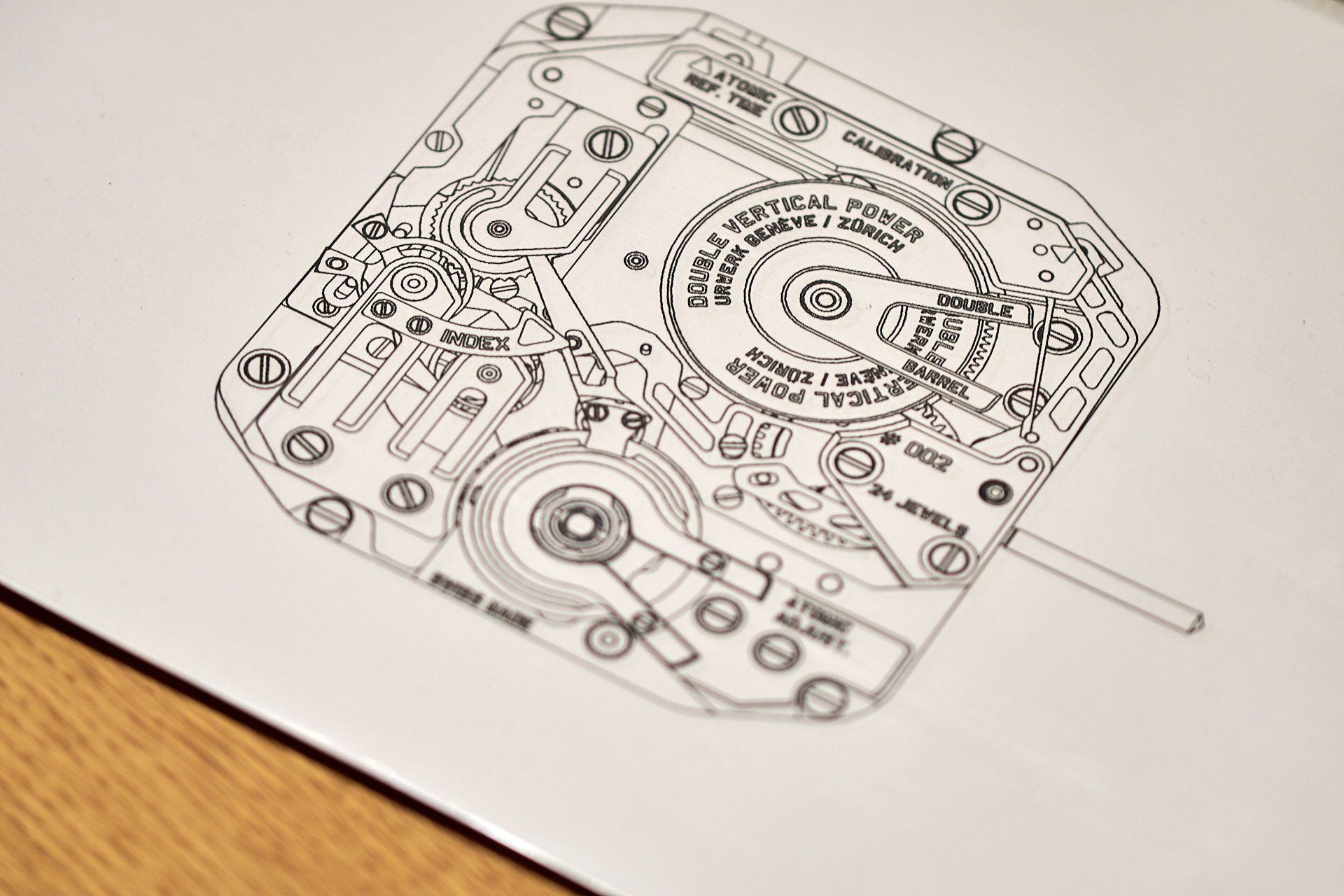 URWERK has undertaken a very interesting project that is about to cross the finish line – as Cyrano Devanthey watchmaker noted, their biggest challenge so far. In the last 8 years they have strived for reinterpreting Abraham-Louis Breguet’s marvellous sympathique clocks in an URWERK way. Cyrano showed us the work in progress AMC at the SIHH 2018 and the completed piece during the Basel watch week in March 2018.

There are contemporary watchmakers whose image has undeniably been associated with transposing the highest grade of the ancient watch-engineering art onto a 21st century platform. In many ways, they do what the outstanding figures of the past did: building a sustainable business but always fancying entering new territories. Just like much of their contemporaries they are blessed with technical wisdom and fine visual sensors, but they stand out with an inexorable drive for quality, a self-defined futuristic perspective, humbleness and a good amount of curiosity. Their mission seems to point beyond plain business. They take personal responsibility in preserving the best of their long-living profession and the time to discover and encourage those who could run with the baton even further.

Challenging the past and the future

URWERK’s founders Felix Baumgartner and Martin Frei are among these individuals. They have been setting an example with their own actions while leaving space for others to explore their own ideas and limitations along the same values. They surround themselves with like-minded talents who have the guts to live with the opportunity and impact URWERK’s products and go even beyond. These explorations may target both extremes: sometimes to realise pioneering ideas, at other times to return to methods that have already been forgotten.

Physician and designer Dominique Buser and watchmaker Cyrano Devanthey have been zealous partners in pushing the boundaries. They studied together in Solothurn and went their own ways before reuniting at URWERK. They both collected old watchmaking machinery and restored them to working condition. These spirited good old human-controlled machines and the cherished dream of creating a watch with all parts from A-Z with them brought the Oscillon project alive in 2016. Having walked the same path as the “Naissance d’une Montre” initiative of Robert Greubel, Stephen Forsey, Philippe Dufour and the French teacher Michel Boulanger, Oscillon got invited to continue under the aegis of the Time Æon Foundation and with the support of URWERK and FHH. The two presented their first timepiece in 2017 created under the guidance of Felix Baumgartner.

Cyrano and Dominique have also been instrumental in fuelling URWERK’s spaceship. For instance, they participated in developing the EMC (Electro Mechanical Control), a mechanical timepiece with electronic performance monitoring, which offers the owner a direct access to its beating heart.

While EMC and its second generation had been marching forward to win various awards in 2016 and 2017, the AMC (Atomic Mechanical Control) had already been well on the drafting table. Being a physician, Dominique has naturally been excited to create a mechanical timepiece controlled by atomic clocks. Atomic clocks are the most precise timekeepers of today, which provide an oscillation standard based on the frequency of the microwave signal the electrons in atoms emit when changing energy levels.

Engaging with atomic clocks was a rather no-go for Felix Baumgartner, but it was probably the EMC project which opened the door to re-thinking how traditional watch mechanisms can be enhanced with special electronics. When the idea of reinterpreting Breguet’s astonishing Sympathique clock was conceived, revisiting the atomic clock concept returned.

Although every single mechanical watch today bears his marks, the genius of Abraham-Louis Breguet (1747 – 1823) becomes shockingly apparent when an ambitious project such as URWERK’s AMC raises questions Breguet found answers to over 200 years ago. At that state of the technology (machining, metallurgy, engineering and pen & paper added design) he managed to create a mechanical system that regulated itself. He called it the ‘Sympathique’ clock. It comprised of a ‘mother’ clock providing a highly precise reference time and a pocket watch, which could be worn normally and placed in the special cradle of the mother clock for the night. The mother clock synced the pocket watch to the reference time, wound up its mainspring and even regulated its running for greater accuracy (only this one that we know of had all three functions in a single piece – the rest had two functions in different combinations). Although not as spectacular as other complications or mechanical entertainers of the era such as the writing, piano playing and drawing automata of Jacquet-Droz, the idea of the self-regulating systems was well ahead of its time…

URWERK took Breguet’s concept and re-imagined it for the 21st century: the mother clock became the most precise timekeeper available today and an atomic clock and a wristwatch replaced the pocket watch. Lifting the bar even higher, they aim to embed all three main functions mentioned above in the system.

The mother clock milled from aluminium incorporates the reference time module (developed for URWERK by TIMEstandard in collaboration with atomic clock producer Spectratime) and its decent power source. These are the two large metallic bars in the aluminium cage. What you don’t see here yet is the electronics to trigger setting, regulating and winding the actions and some moving parts. The atomic clock will also have a time display itself and will be decorated. If you take only the frequency stability of the atomic clock into account (mentioned by Dominique in the below video), the accuracy is 1 sec in every 300.000 years. Calculating also with ageing, temperature changes and all the other factors, a maximum of 1 second in 317 years is forecasted at the very worst case. 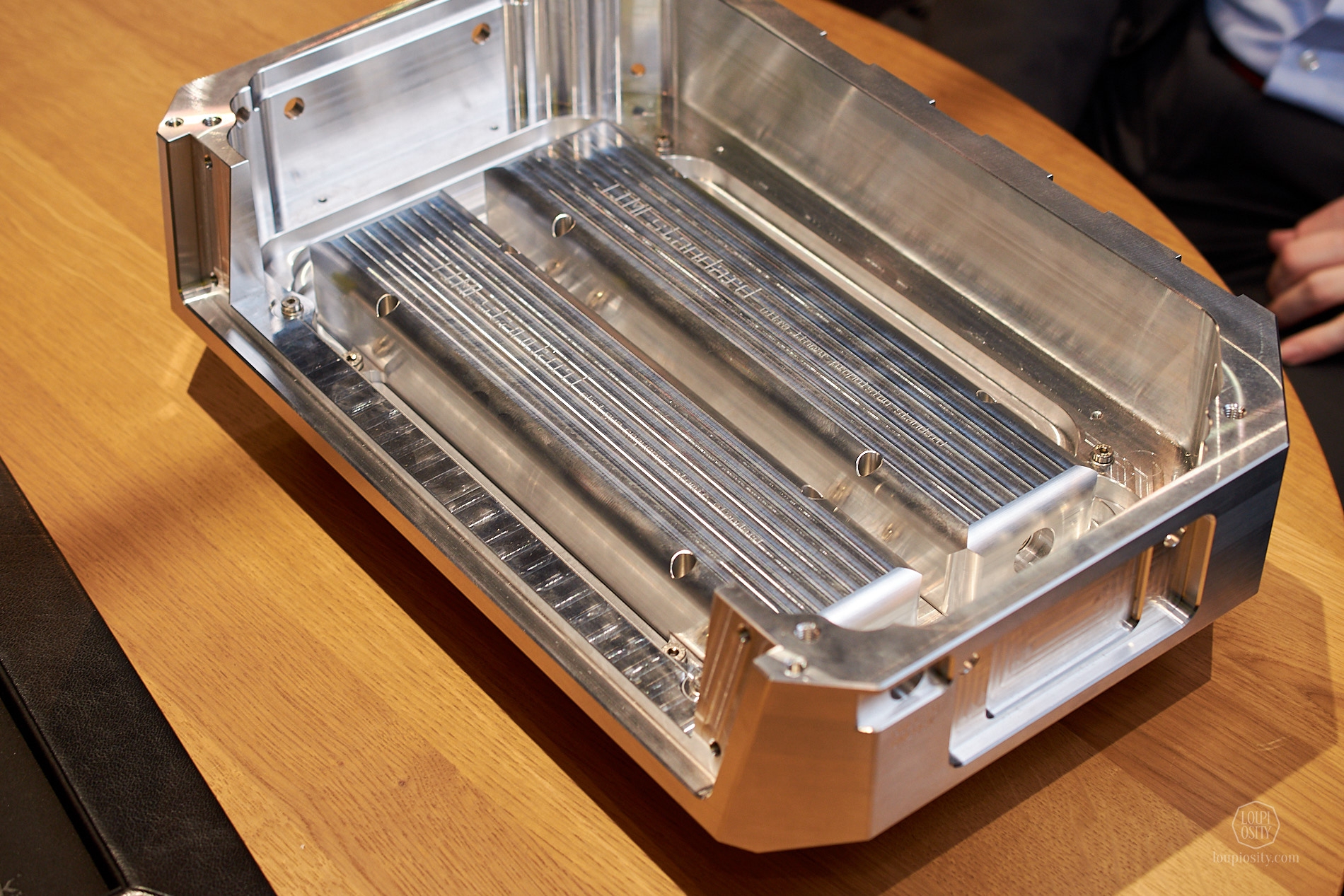 The wrist watch includes the mechanical movement and all the components necessary to perform these functions upon being triggered by the mother clock. At the first quick look, the movement of the EMC and that of the AMC slave watch seems identical. In reality, it is only the shape, that the balance wheel and double barrel they have in common.

The AMC wrist watch has two special mechanisms to perform the rate adjustments and the time synchronisation. 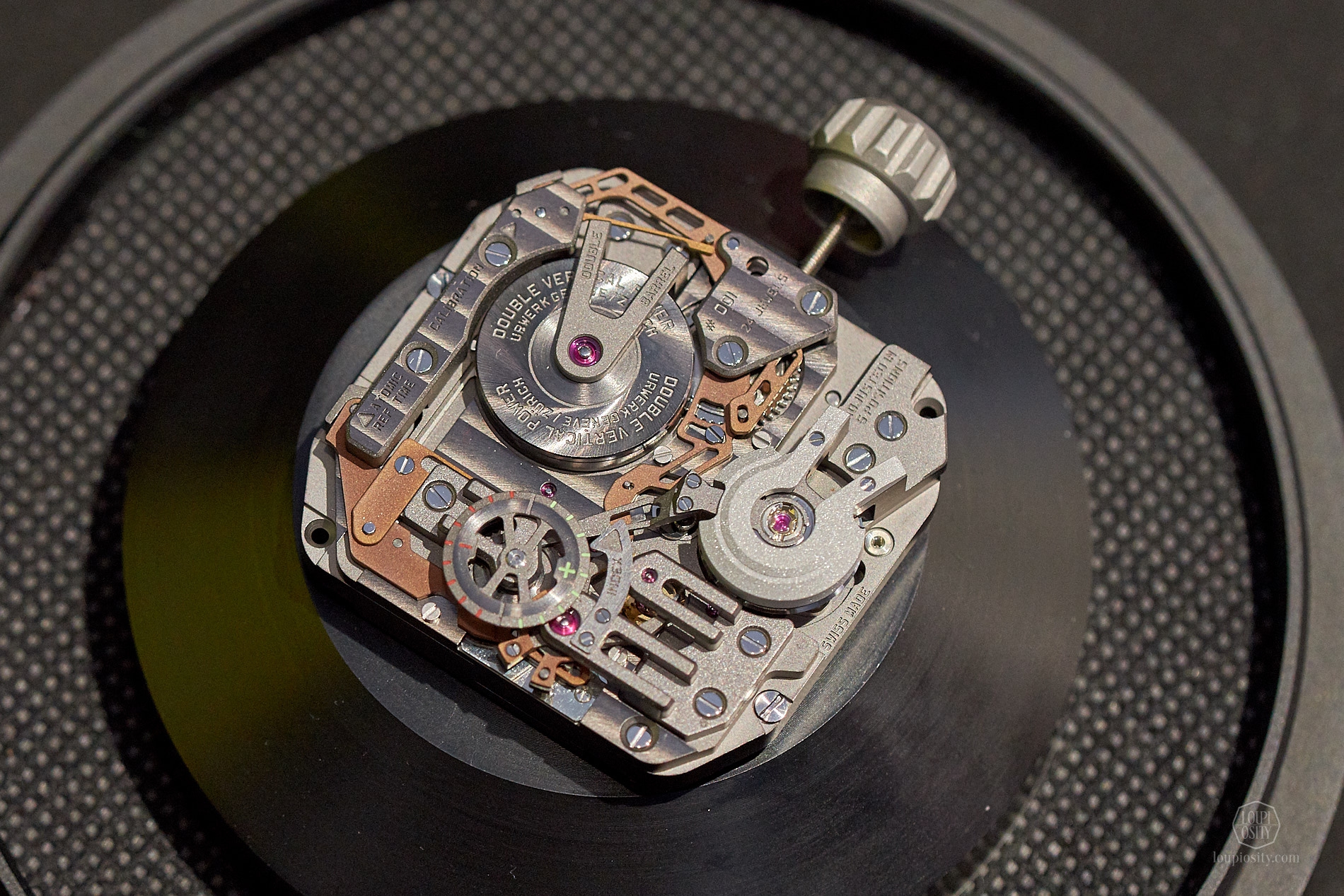 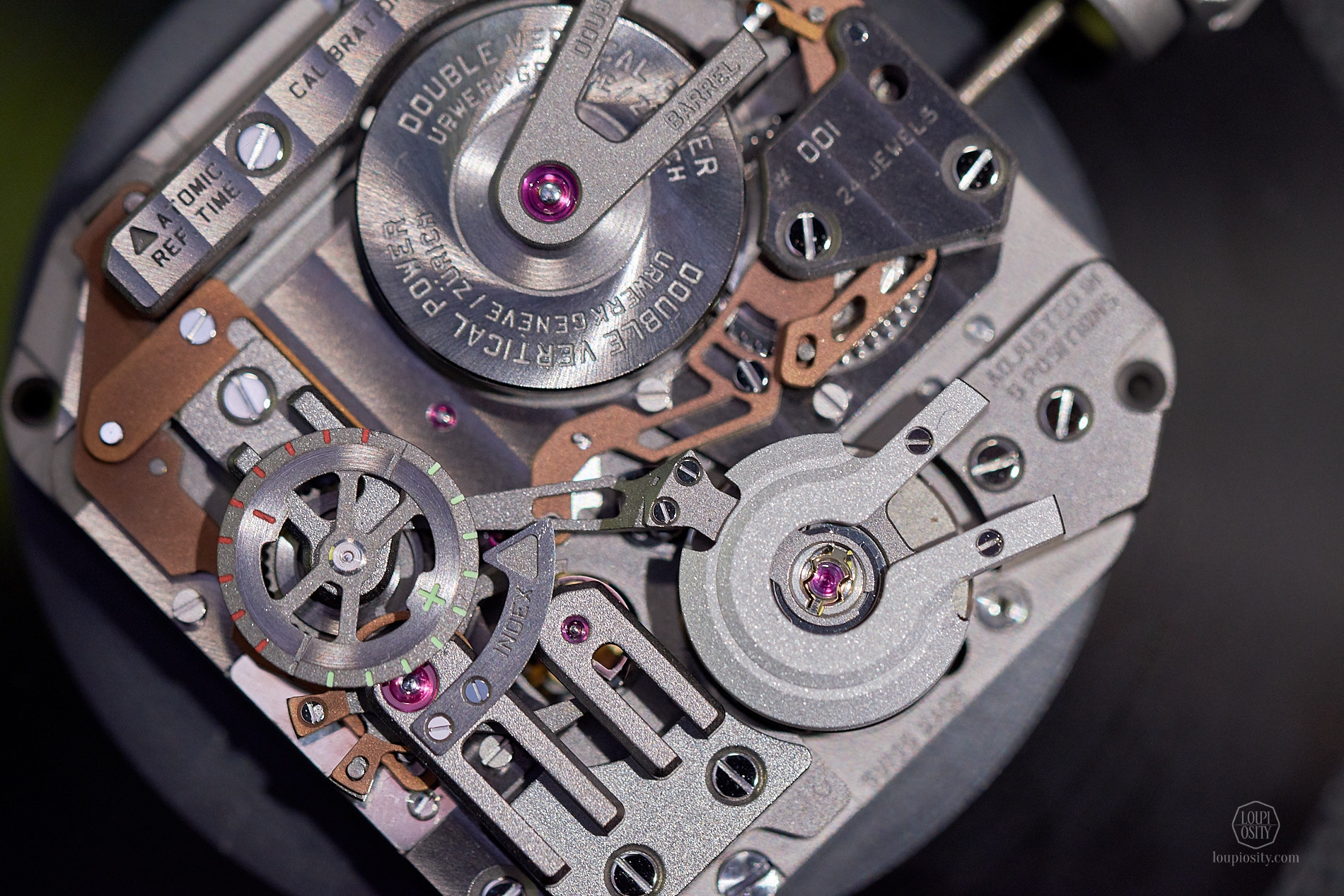 Probably the most complicated of all is to sense the rate of the small balance wheel in the wristwatch and make it faster or slower depending on its current performance. It is done gradually, and triggered always at XX:59:00.

At a certain point in time, a lever running along the side of the movement is pushed by an extending bar from the mother clock. This makes two jaws on the other end of the lever close on a half-round shape that looks like a micro rotor. The jaws have a tooth on their central pivot, which engages with a wheel.

Trying to catch the uneven shape can have three possible results:

1. the jaws close exactly on the outmost tips of the half-round (shown on the picture), which means that the wristwatch is in sync with the mother clock; 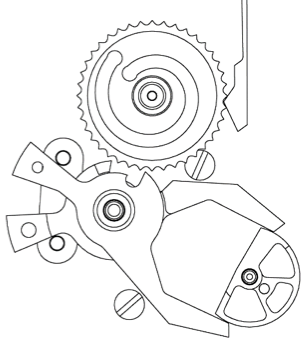 2. the bottom jaw closes on the round, while the top closes on the flat side of the shape. This means that the wristwatch is faster than it should be. The instability of the catch makes the shape rotate and the jaws close further. As a result, the tooth on the jaws will rotate the linked wheel counter-clockwise by one tooth. 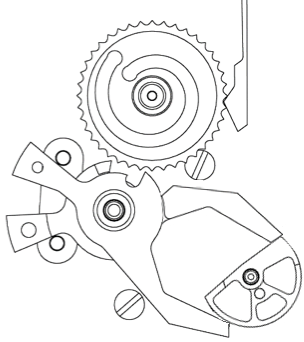 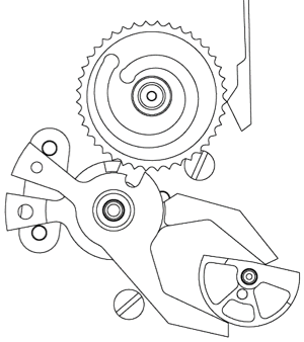 3. the bottom jaw closes on the flat, while the top closes on the round side, meaning that the wristwatch is slow, which will rotate the above wheel clockwise by one tooth.

The wheel being rotated is situated under the red-green scale with the plus and minus signs. It has a spiral within. A peg in the spiral is in contact with the balance’s index lever and as the wheel rotates it changes the effective length of the spring. Each tooth on the wheel corresponds to a 1-2 seconds rate adjustment depending on the final model.

The mother clock sets the time of the wristwatch to its reference time just one minute after setting the rate.

A few minutes before the event it pushes a lever that has two paws on its opposite end. These engage with two heart-shaped cams fitted on the second wheel and the minute wheel (via an intermediate wheel). The paws slide on the heart shape which turns the wheels. When they rest, the hands are set to zero. At the synchronisation time, the mother clock releases the lever, which lifts off the paws and the hands start to rotate.

This function does not require any additional parts within the wristwatch. It is performed by a shaft from the mother clock that extends and rotates the crown.

The project continues and the amazing AMC system is said to be ready by the Basel fair. We will be there to see it.

Dominique Buser about the AMC at the SIHH Auditorium

UPDATE: The completed URWERK AMC presented at the Basel watch week in March 2018 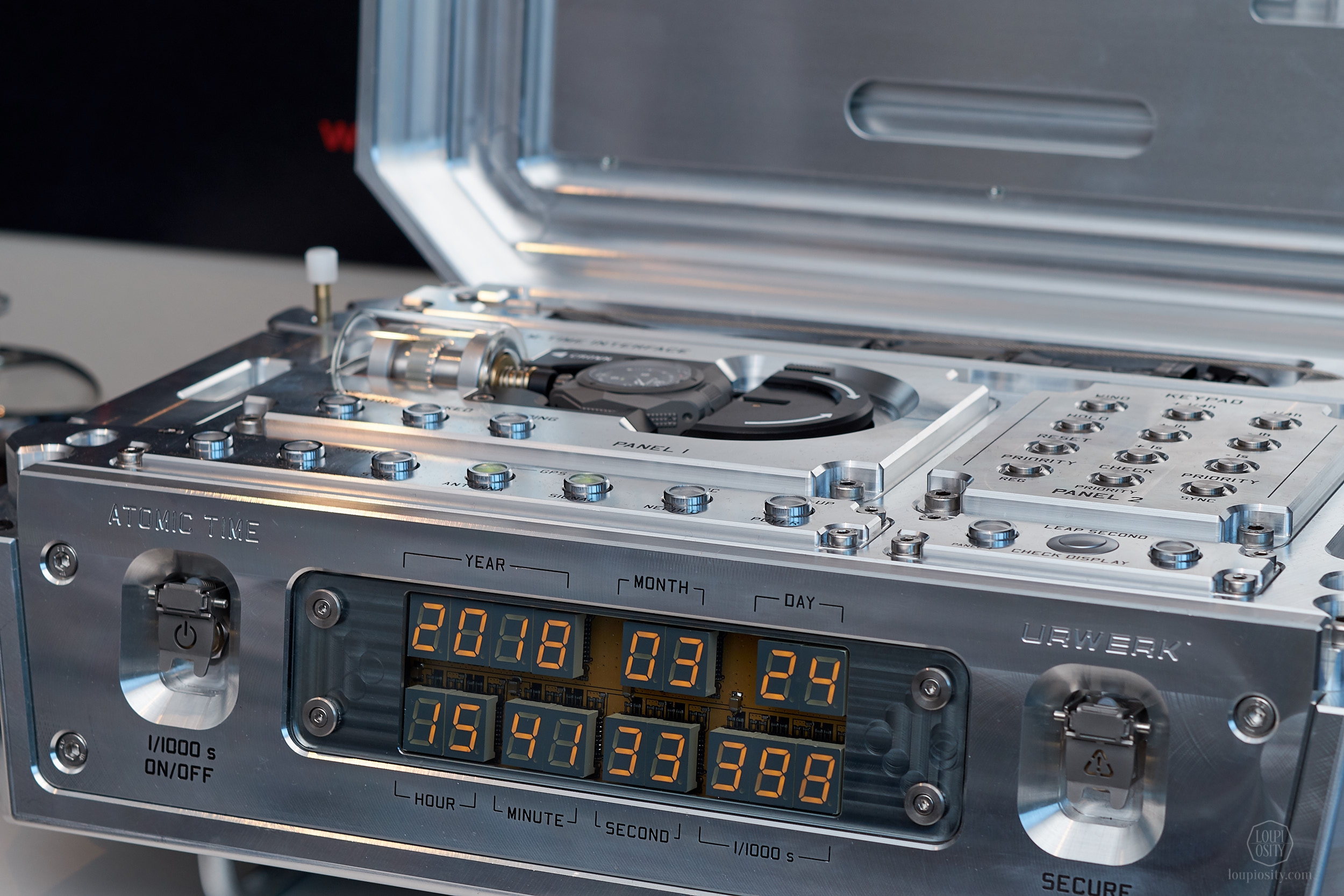 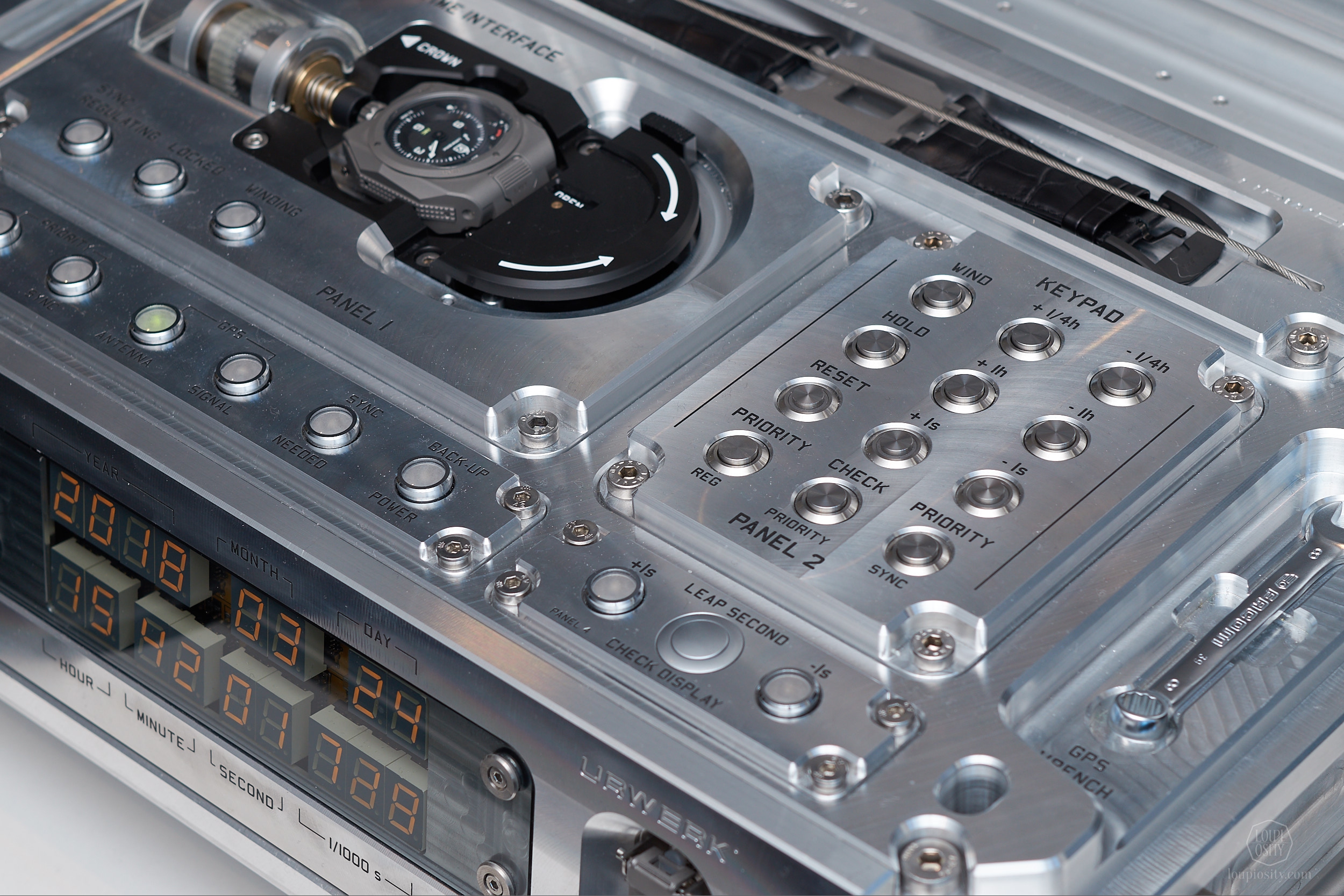 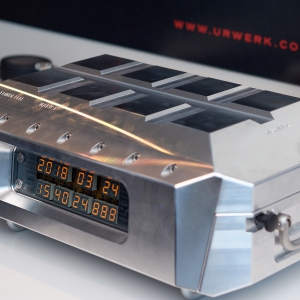 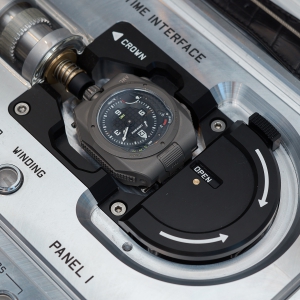 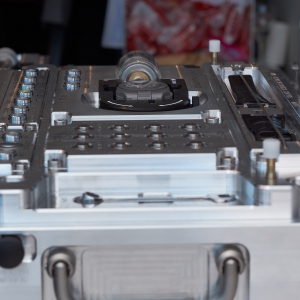 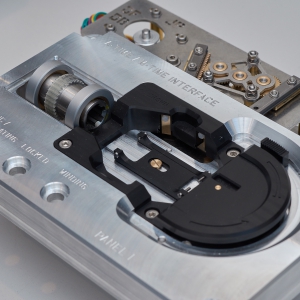 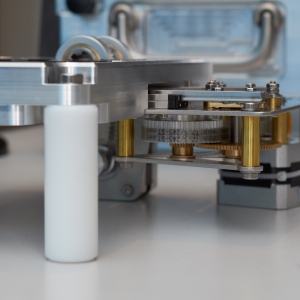 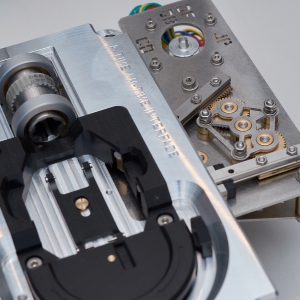 Photo credits: URWERK, Loupiosity.
All registered trademarks are property of their respective owners.
All rights reserved.

URWERK - Geneva Watch Days For the Geneva Watch Days, URWERK set up in a beautiful suite with a lakeside view at the Beau-Rivage to introduce their latest novelties. We saw the unique UR-T8 Raptor piece and the EMC Time Hunter Desert Sage.Vacheron Constantin - Métiers d'Art Tribute to great… Vacheron Constantin presented a number of novelties under the motto ‘Classic With a Twist’ at the Watches & Wonders 2021. New Métiers D’Art creations have also seen the light with a discrete satellite time display as a twist.Only Watch 2021 The ninth edition of the Only Watch auction will be held 6 November 2021 in Geneva. The selection includes unique timepieces created by the finest brands to support the research of Duchenne muscular dystrophy.