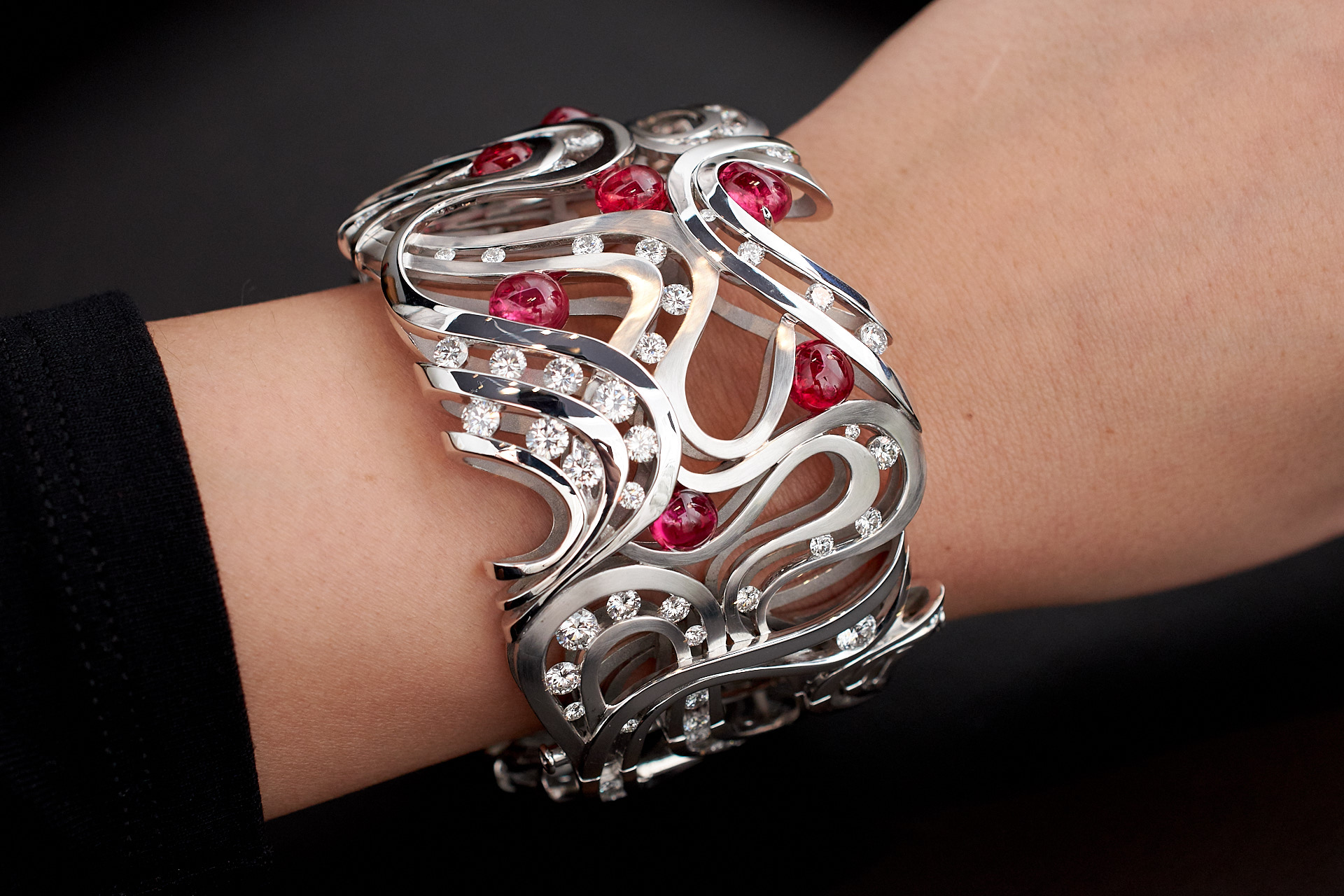 In 2018 the annual TEFAF Maastricht fell from 9-18th March. It featured an enormous selection of fine art, antiques and design objects and hosted a series of thought-provoking discussions.

‘Collecting in the 21st century’ was the main theme of the TEFAF Art Symposium this year. The conversation about the increasingly globalised market and the changing standards and expectations was led by Nanne Dekking, Chairman of the TEFAF Board of Trustees. The panel talked about the transparency of the art market, the role of online and social media and new attitudes and ethics in collecting.

Beyond the talks, the audience could get a taster into the restoration works. The Amsterdam Museum’s loan exhibition at TEFAF Maastricht 2018 presented important paintings from the 17th century, which went through extensive restorations in the past years. The degree of damage prior to treatment and the final restored works were both showcased. Visitors could also see the process and listen to the restorer at work on the video next to the paintings. The centrepiece of the loan exhibition was a restored masterpiece by Bartholomeus van der Helst, The Headmen of the Longbow Civic Guard House (1653). What makes the portrait of the prominent individuals very special is that the silverware depicted by the artist in the mid-17th century survived and were also shown next to the painting. 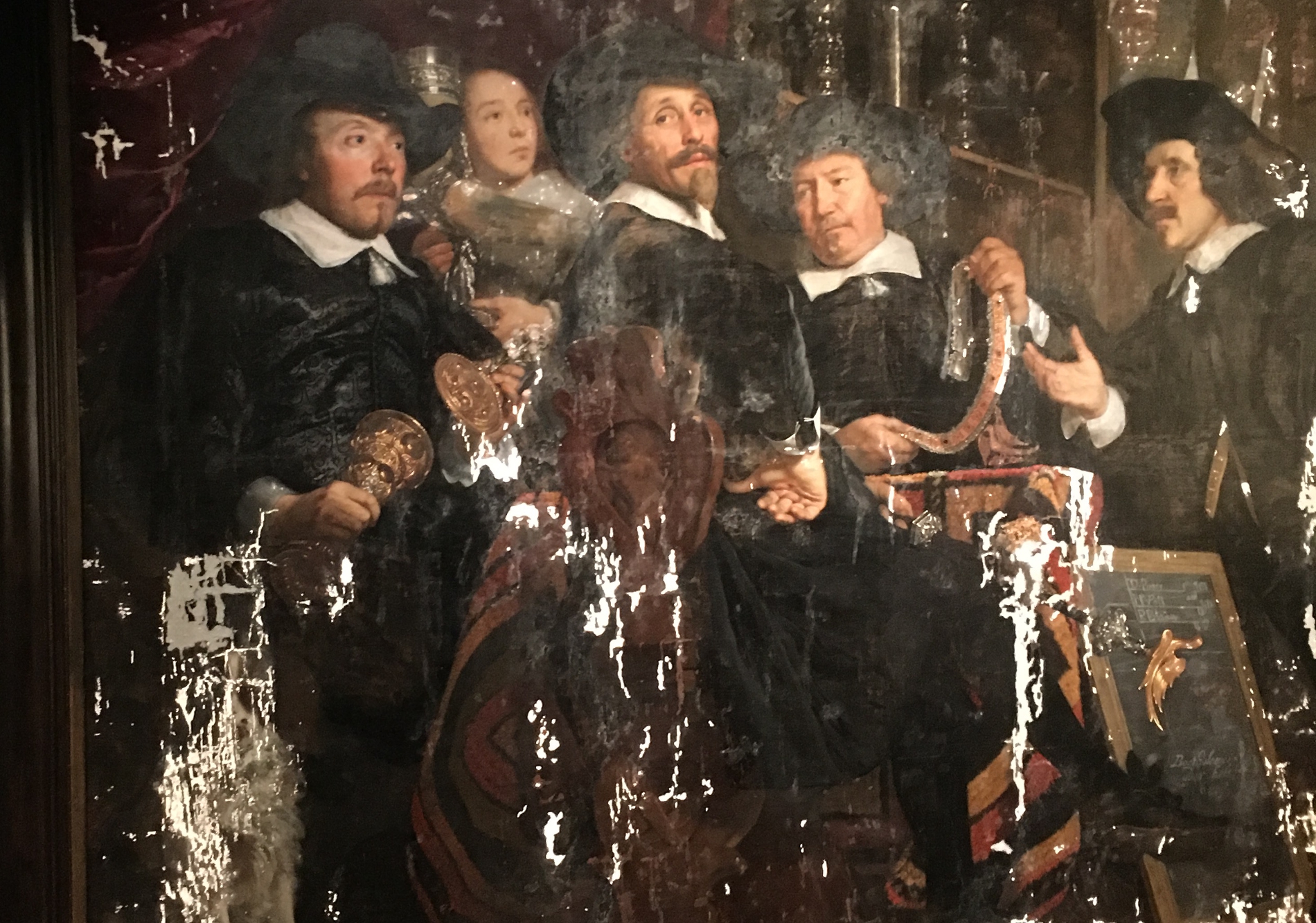 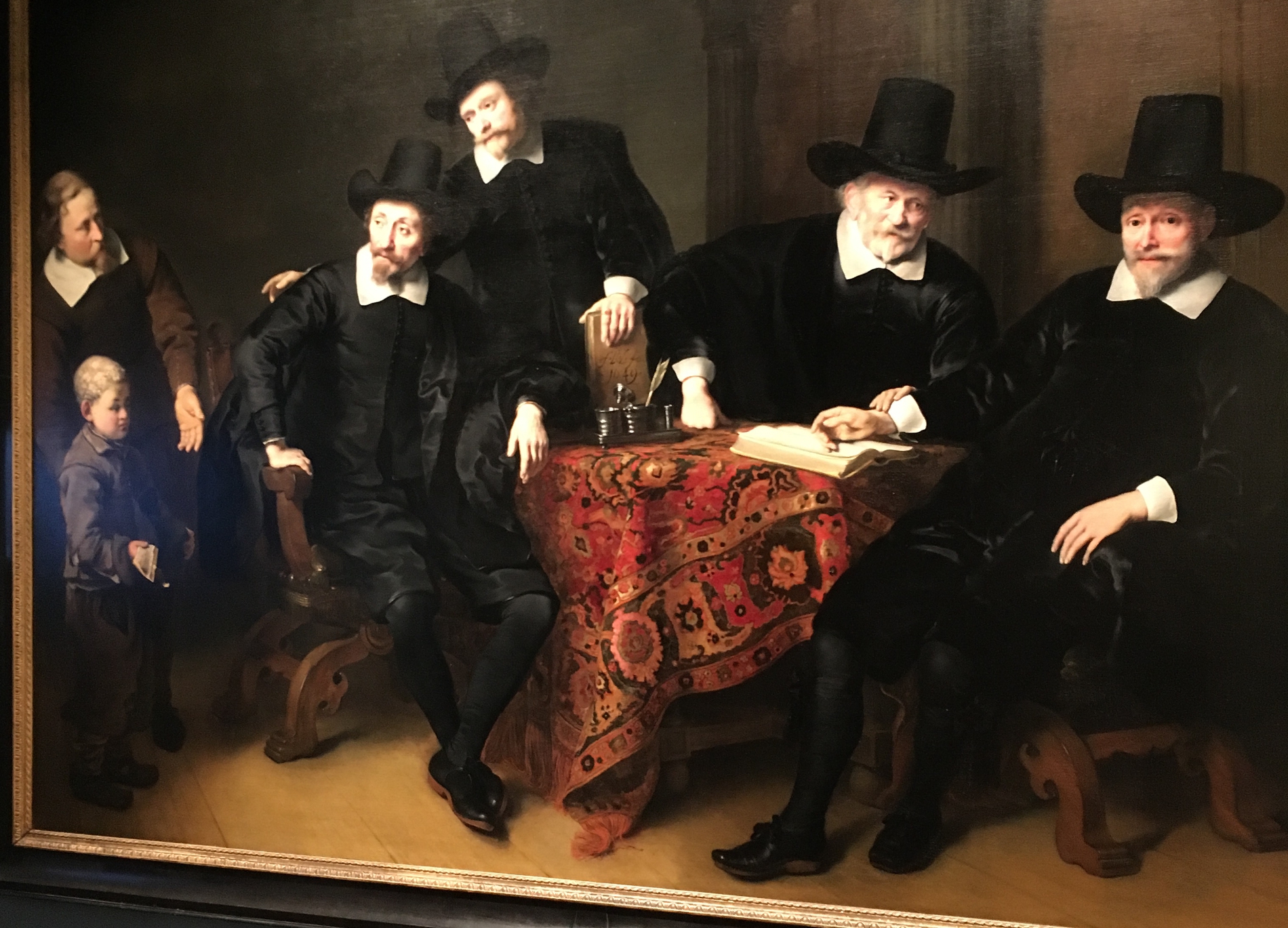 Restoration and conservation are important subjects at TEFAF. The organisation also donates up to EUR 50,000 annually to selected conservation projects of museums. The two new recipients of the fund are the Museu Nacional de Arte Antiga in Portugal and the Museum of Fine Arts in Boston, USA. In Portugal it will support the conservation of the oldest part of the ‘Palácio Alvor’ palace complex, called ‘Capela das Albertas’. The chapel founded between 1583 and 1598 has a beautifully contrasting simple exterior and a lavish interior. In the USA, it will contribute to the restoration of a painting by Rembrandt Harmensz van Rijn. The ‘Portrait of a Woman with a Gold Chain’ is one of the two oval paintings gifted to the museum in the late 19th century. Although structurally stable, the painting has not been treated for 50 years, so it’s in dire need of cleaning and retouching. Projects such as these aim to preserve the heritage and present the original beauty of each work to visitors.

The outstanding selection of artworks includes a dedicated section to High Jewellery. It lines up contemporary jewellery artists like Wallace Chan, Hemmerle, Otto Jakob and Reza, all that will be the sought after antiques of tomorrow.

One of the most recognisable and creative jewellery houses is Hemmerle. Led by the fourth generation of the family, they have been loyal exhibitors at TEFAF. The family business dates back to 1893 when brothers Joseph and Anton Hemmerle founded it. The two gentlemen took over a goldsmiths’ company specialising in medals and orders.

In 1895 Hemmerle was appointed ‘Purveyor to the Court’ by Luitpold, the Prince Regent of Bavaria. They quickly become renowned in the Bavarian government and among the great families of the German nobility. The jeweller started to make the Bavarian Maximiliansorden medal in 1905 by order of King Maximilian II. The medal is awarded to acknowledge outstanding achievements in science and art – it is still being made by Hemmerle to this day.

This year Hemmerle celebrates its 125th anniversary and dedicated the new collection to this occasion. The jewels are inspired by the company’s heritage as medal makers. The shapes and forms are reminiscent of those found on the stamps and medals. An example to this is the diamond, blackened silver, iron and white gold pair of earrings that revisit the lines of an old metal stamp with a cross (similar to the Maltese cross but with rounded edges). 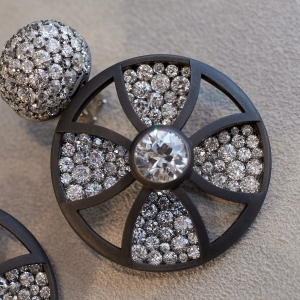 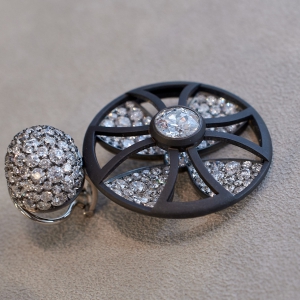 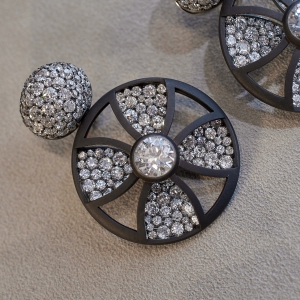 The High Jewellery exhibitors of TEFAF certainly have one thing in common – their jewels require definite taste, personality and the appreciation of being niche. Otto Jakob has an interesting phantasy world, captured via his unique creations – they are more wearable micro sculptures than gemstone-heavy jewels.

He uses not only precious metals or gemstones, but an amazing variety of different materials. He has a great personal collection of minerals and crystals and from time to time, he chooses one to include in a particular creation. This is the case for example with the new ‘Morenas’ earrings. The base of the diamond-set white gold earrings are two tropical Afzelia seeds. Afzelia is a tree native to tropical Africa or Asia. Its species are used primarily for the wood, but it has interesting seeds too – usually red or black and they are used as beads. The seeds come in different shapes and sizes. Otto Jakob had to go through three kilograms of his seed collection to find a handful of matching pairs.

The Hazelnut hanger recalls the shape of a hazelnut seed by depicting the structure of its shell with different goldsmith techniques. 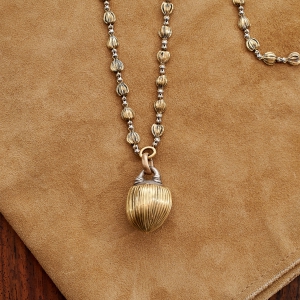 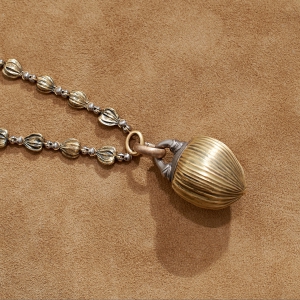 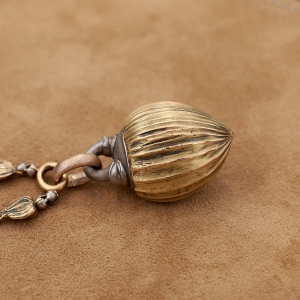 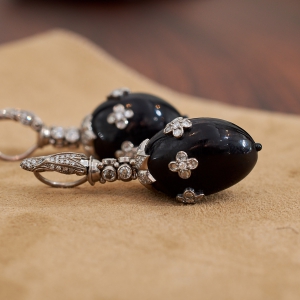 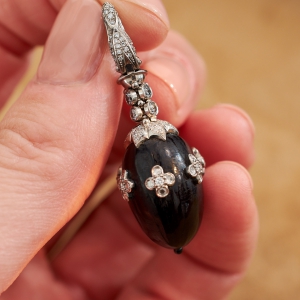 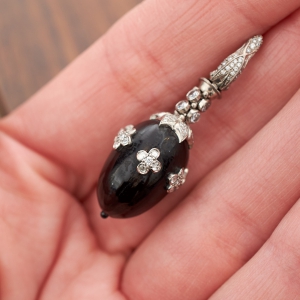 There are not many places in the world where high jewellery aficionados can admire the moving works of REZA, incorporated around the most fantastic gemstones. As the leader of the House, Olivier Reza – the son of the renowned gem dealer and master jeweller Alexandre Reza – decided to close retail outlets worldwide and have an invitation-only salon in Paris and a retail space in the Ritz Paris at the Place Vendôme.

Therefore, it was great opportunity for me to visit their booth at TEFAF. Although the House owns exceptional gemstones (during his travels Alexandre Reza collected rare diamonds, emeralds, sapphires and rubies), Olivier Reza likes to balance the stone and the design and refrains from allowing one to outshine the other. Many REZA creations reflect movement with curving shapes and lines and craftsmen make an emphasis on keeping the jewels comfortably wearable.

Great examples are the Corne d’Abondance earrings, which have many variations with rubies or emeralds, with or without pearls. It has not only a dynamic shape but the pearl- and emerald beads move like little tassels.

One of the highlights was the Mont Blanc cuff in white gold set with 7 cabochon spinels and 110 brilliant-cut diamonds. The surface is sand-blasted and polished on the white gold. It is a real statement piece but far from being heavy – the winding gold lines have different gaps between them, providing the feeling of ‘floating diamonds’.

The new Zamarat Necklace features a Colombian emerald weighing 19.78ct as well as emerald beads, cultured pearls, diamonds and incorporates motives from the edgy Titan bracelets (see here). The Facettes Perle ring shows a different style – a bit more edgy and a bit more contemporary interpretation of a pearl ring with a rose-colored grey natural pearl of over 14ct surrounded by brilliant diamonds, some of them in Fancy Pink colour.

REZA is heading to ART MONTE-CARLO in April, the contemporary and modern Art Fair that will take place under the patronage of H.S.H Prince Albert II of Monaco.

REZA and Hemmerle will also exhibit at TEFAF New York in May. So, take the chance to look at their jewels close-up. 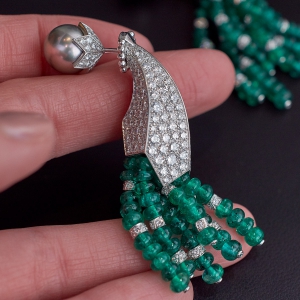 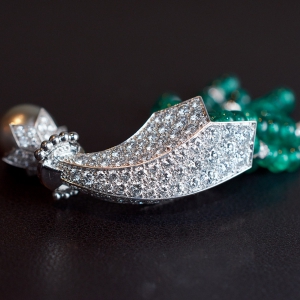 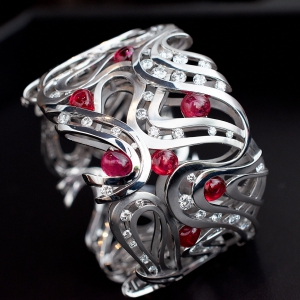 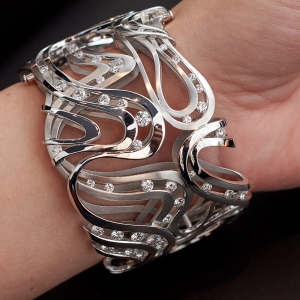 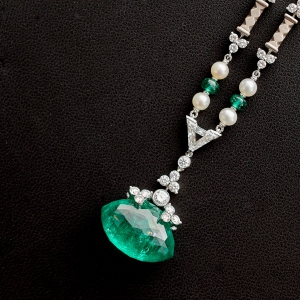 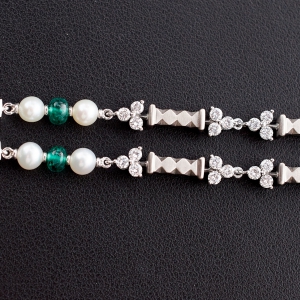 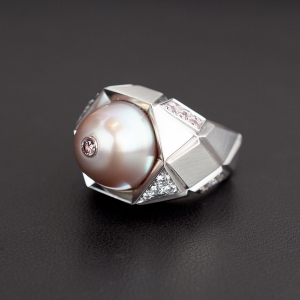 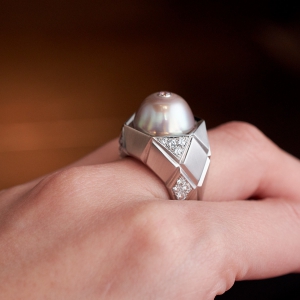 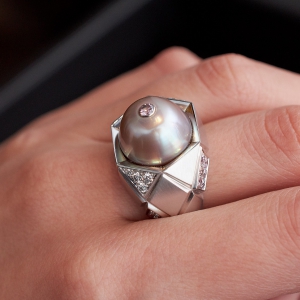 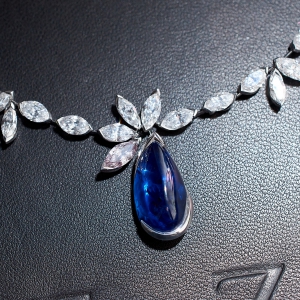 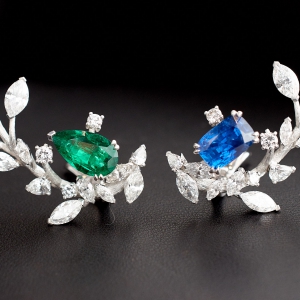 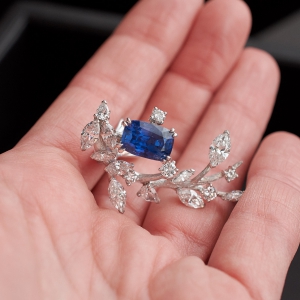 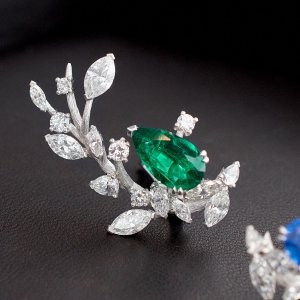 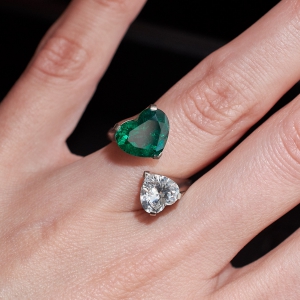 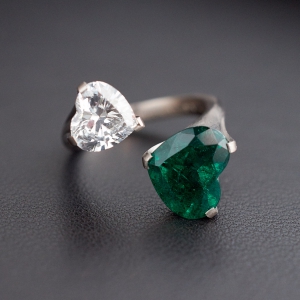 Dubai Watch Week 2021 In the very long months of the pandemic - as any other sector - the luxury industry and the watch brands have been coping with virtual presentations and online product launches. Of course everyone is keen to return to the live events, real personal discussions and not-on-the-Zoom connections. The Dubai Watch Week welcomed a great number of visitors in the sunny…Hemmerle at Design Miami/ Basel One of the most unconventional and most recognisable high-jewellery houses, Hemmerle exhibited for the first time at Design Miami/ Basel. Finally we got to see art, jewellery and design pieces in real life in Basel - so naturally, the booth of the Munich-based brand was the top on the list to visit.Interview with Franziska Gsell, CMO & Sustainability… I met Franziska Gsell, CMO & Sustainability Committee Chair, Executive Board Member at the stylish and minimalist IWC Schaffhausen booth during Watches and Wonders. We discussed how the pandemic has changed the way IWC interacts with customers and what sustainability means for the brand.