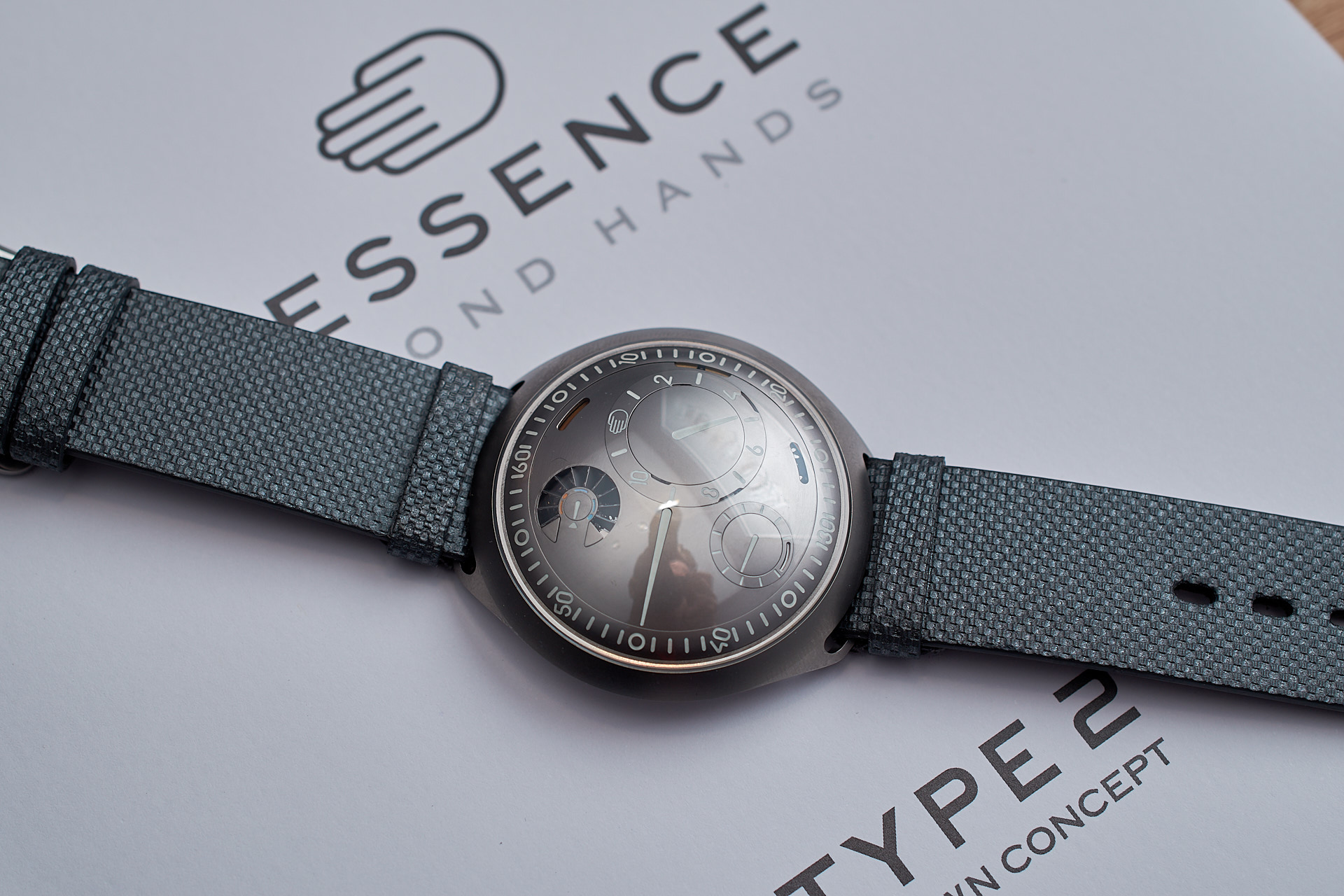 When a talented ‘outsider’ enters a well-known playing field, the same rules start to gain a new meaning. Industrial designer Benoît Mintiens took the user experience-centric mind-set of his profession and spiced up the watch arena with it. We saw the e-Crown, Ressence’s brand new innovation at the SIHH 2018.

Ressence have proudly adhered to the ‘freedom to think differently’ concept since their inception in 2010. The passing of time is animated by a disc in a disc mechanism called ROCS or Ressence Orbital Convex System on all ‘Types’ in their collection. Sometime it works dry (Type 1 and Type 2), other times it is immersed in 35mm of oil (Type 3 and Type 5), which projects the crazy revolving eyes onto the glass. The genuine concept and the immaculate execution brought home the Horological Revelation Award at the 2013 Grand Prix d’Horlogerie de Genève (GPHG) among others.

At SIHH 2018, the company presented their next big thing: an autonomous electro-mechanical time-setting mechanism, the e-Crown. Its promise is to keep the timepiece accurate by relying on no external regulating signals (like GPS or radio) and by using only natural batteries: the wrist movements and the sunlight. The interesting unit came to Geneva embedded in the Type 2 e-Crown Concept watch. 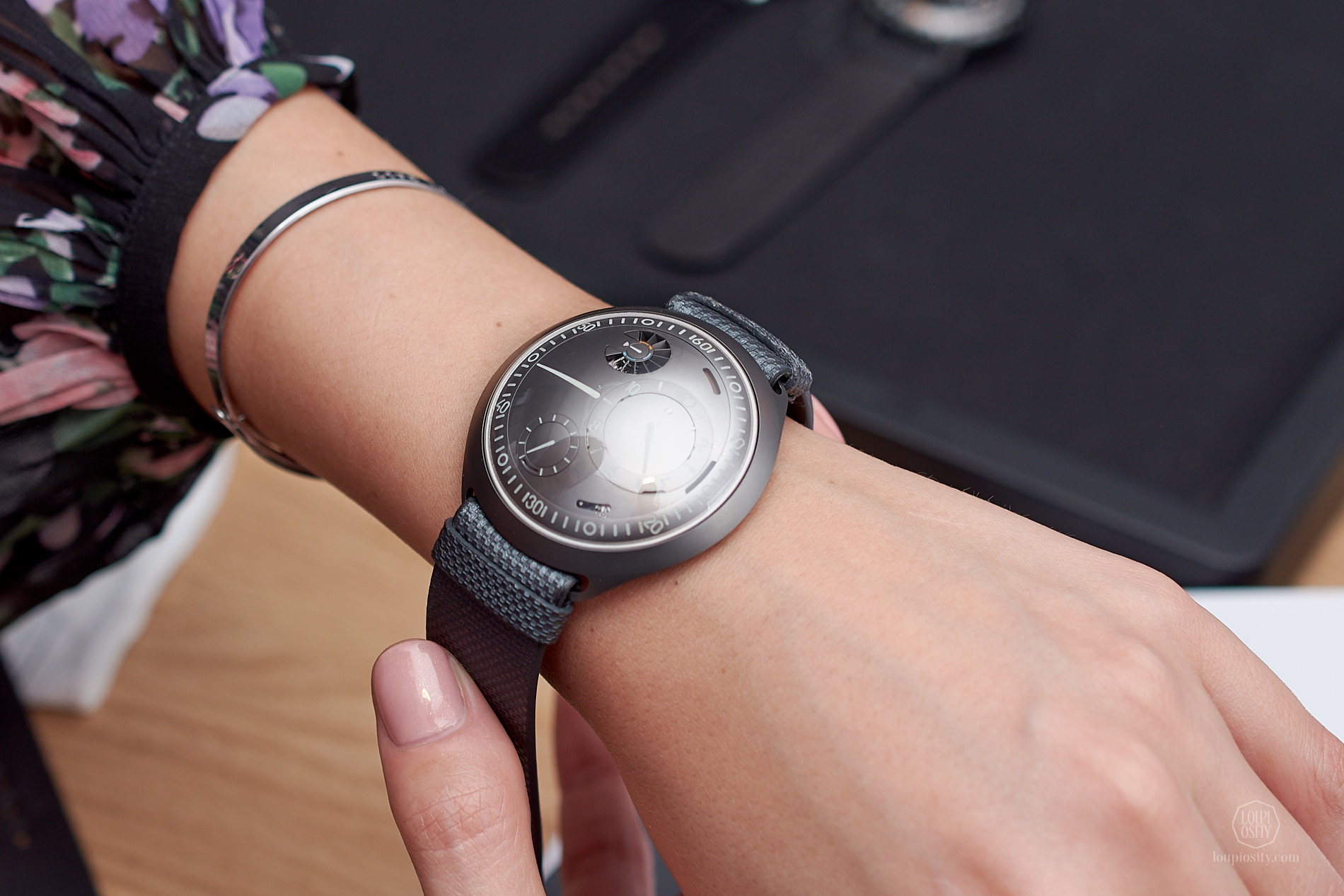 The name e-Crown refers to its main function: a smart unit for setting the time indication. It is an electronic circuit with a motor and wheels, situated between the base calibre (a modified ETA 2824) and the ROCS disc system. Normally, the ROCS is connected by the canon pinion to the extended pinion that rises from the centre wheel of the movement. By driving the canon pinion with the movement, the wheeling of the ROCS revolves the discs at the right pace. The connection is not super stiff, but the cannon pinion can slip over the extended pinion in order to allow setting the hands without moving the entire gear train (that would not be possible anyway due to the locking pallets in the escapement). During time setting, ‘human power’ rotates the minute wheel in the ROCS which moves all other gears in the displaying device; however the force does not go back to the calibre thanks to the slipping of the cannon pinion. The e-Crown sits right here and its motor replaces the ‘human power’.

And it does intervene only when needed in a very clever way. The brains consist of a microprocessor, a management system, several sensors and a communication unit. It keeps track of a self-set reference time electronically and continuously, no matter what. Setting this reference time is done by tapping the glass of the watch with two fingers (just like on a touchpad) followed by the turning of the case back lever. When done, the hand positions are read by a specific sensor which kicks off the running of the reference time within the management unit. At regular intervals, the same sensor is directed to read the time that the indicators show and if they differ from the reference time, the system applies the appropriate amount of crown rotation by starting the motor. 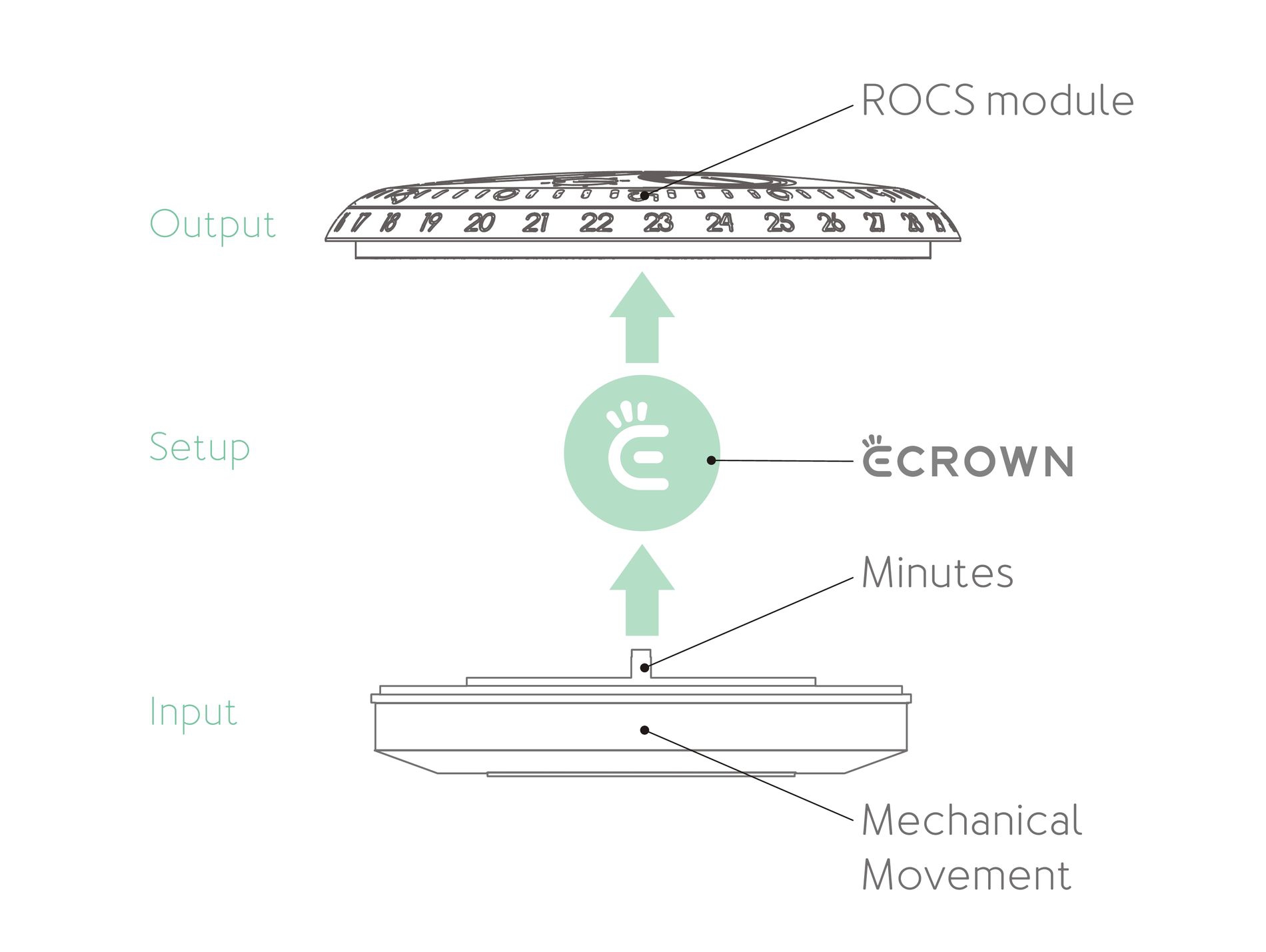 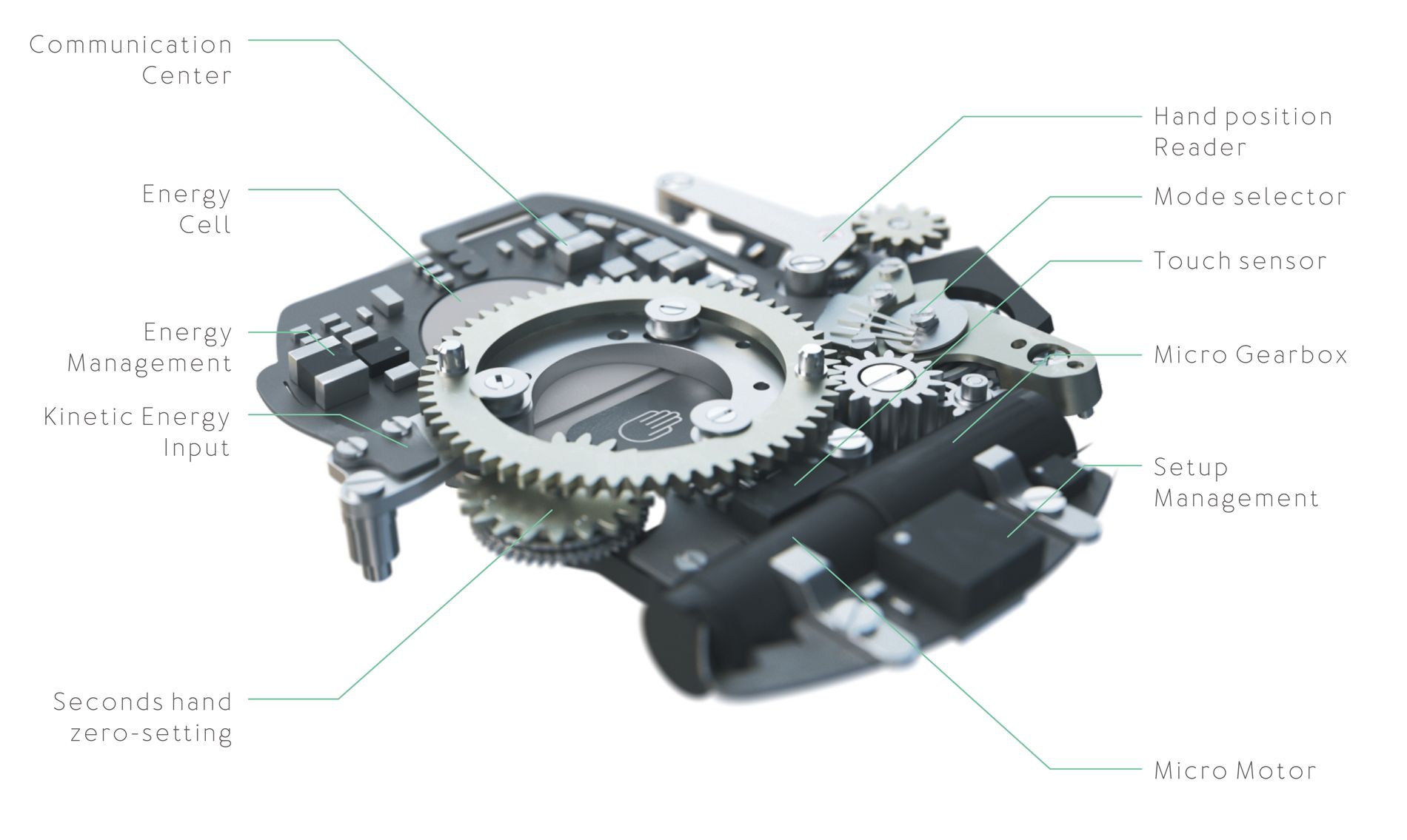 The e-Crown can be triggered from outside the watch too. Ressence developed a smart phone app, where users can set multiple time-zones. The app communicates with the watch via Bluetooth and upon new settings it sends the signal with the new time to display. As you pick the time-zone on the phone, the e-Crown makes the planets of the watch move around back and forth – pretty amazing!

The ingenuity of the entire system is in the energy management. First of all the watch, including the e-Crown, uses self-generated kinetic and photovoltaic energy. The movement is automatic and stores the required energy by winding the mainspring. The e-Crown also has a kinetic energy unit with a generator and an energy cell for storage. Additionally, an auxiliary source has also been incorporated under 10 little shutters. These are photo sensitive cells, which are activated upon the drop of energy – for instance, when the watch is not worn for a longer period. The entire complex e-Crown uses 1.8 Joules of energy per day (although tiny, but just to compare, the mainspring of the ETA 2824/2 movement stores 0.3 Joules that keeps the calibre in motion for 38 hours – this is how efficient watch mechanisms became).

The e-Crown was presented in a Type 2 e-Crown Concept watch. Type 2 will be put into production later in June. 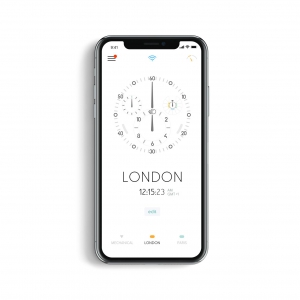 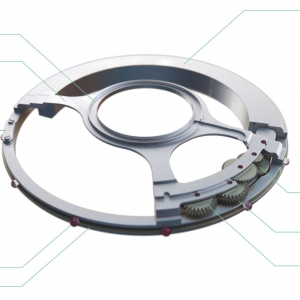 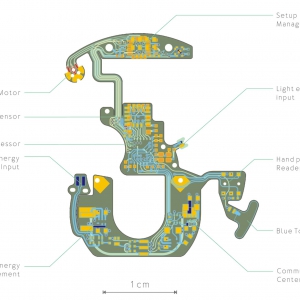 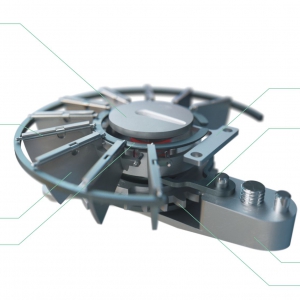 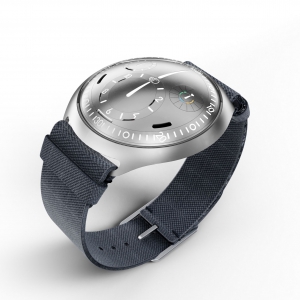 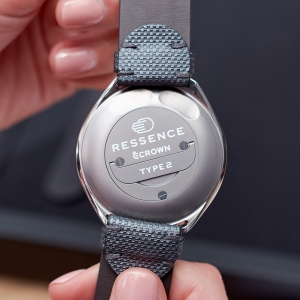 Photo credits: Ressence, Loupiosity.com.
All registered trademarks are property of their respective owners.
All rights reserved.

Ressence Type 1 Squared X Ressence celebrates its 10th anniversary with the Collection X - four watches, released throughout the last months, each is limited to 40 pieces and shares the main dark olive-green colour-theme. Now here is the latest one, the Type 1 Squared X.Ressence Type 1 Slim X Ressence was born in 2010 with a clear purpose in mind: improving the function of the mechanical watch in the 21st century context. This summer the brand presents the new Type 1 Slim X, a limited-edition piece marking its 10th anniversary.Time to Draw - with Ressence and Sotheby’s Ressence and Sotheby’s are joining forces against the coronavirus and launch a competition to design a unique watch and support a covid-19 research programme.