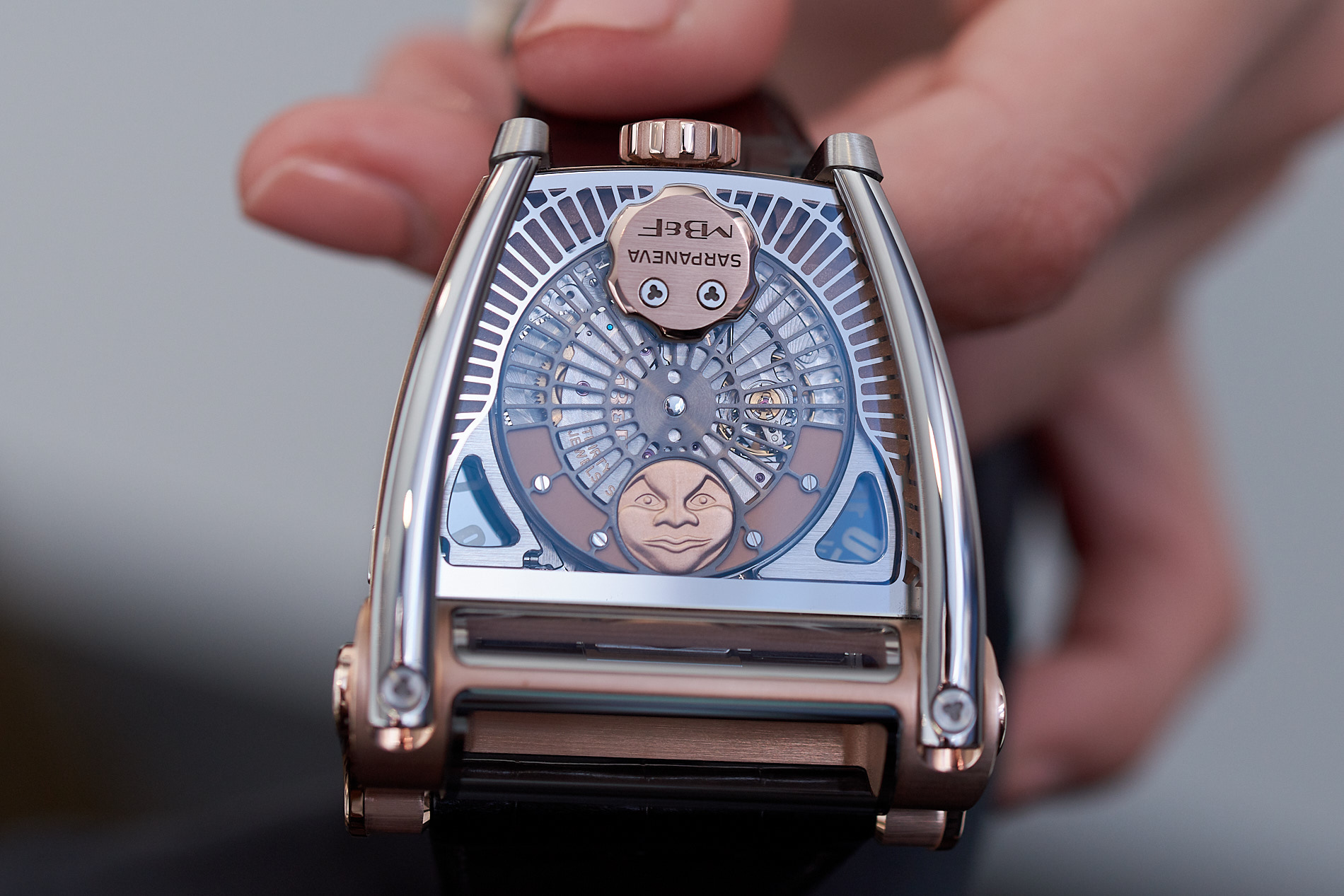 MB&F invited long-time friend Stepan Sarpaneva to re-imagine the Horological Machine #8. The recent collaboration took shape in the MoonMachine 2, which we also held in our hand at SIHH 2018.

Maximilian Büsser established MB&F in 2005. With his watchmaking experience in his pocket and his network in the address book he realised a long-cherished idea of creating an engineering garage for radical concept watches. He imagined it with like-minded people and together they have created almost 40 time objects in the past 13 years. Interestingly, friends don’t just appear by a generic impersonal word in the brand’s name, but their photos and stories can be found on the website – look it up, it’s a very good read with familiar faces! 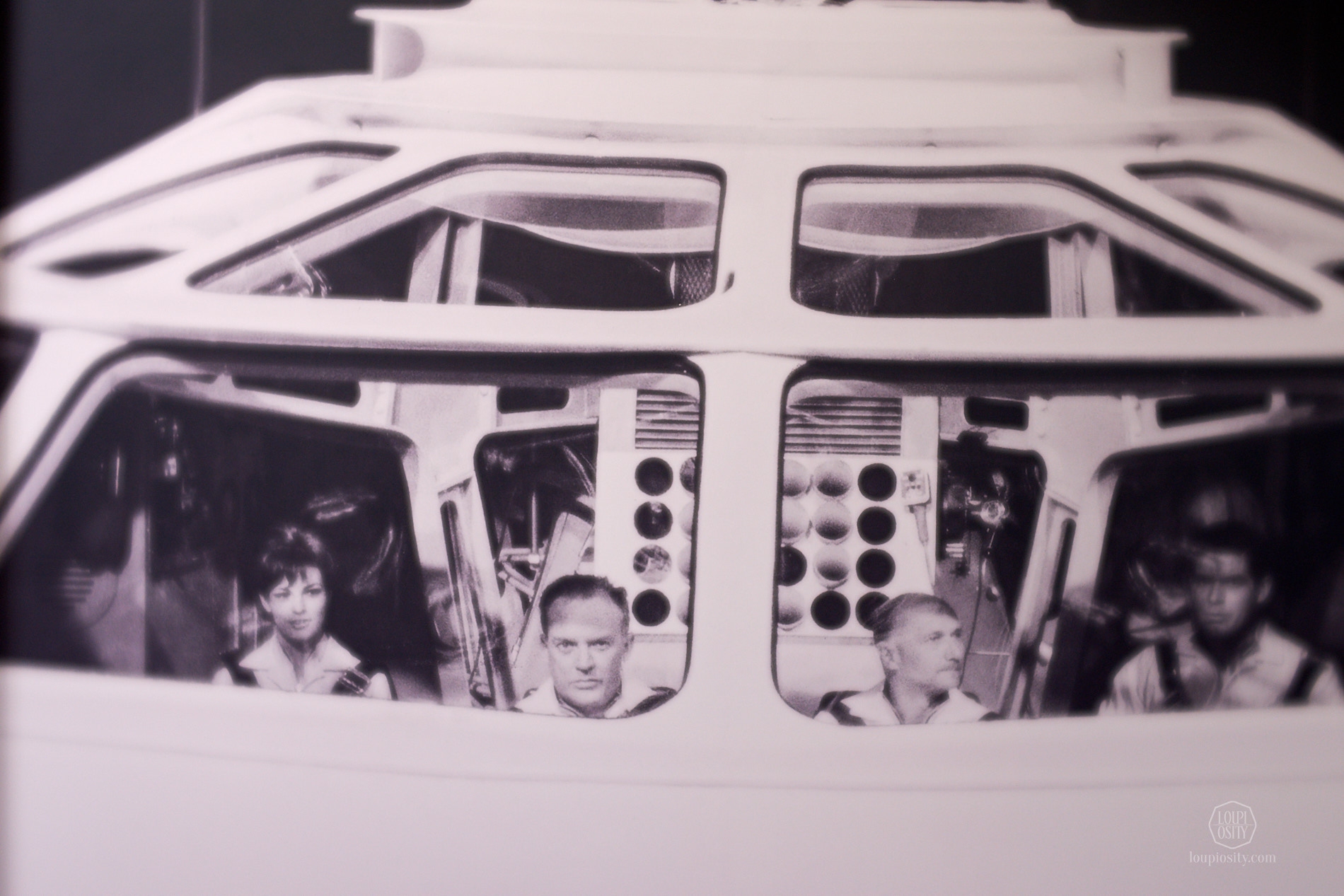 One of these blokes is the Finnish Stepan Sarpaneva, who runs his own watchmaking workshop in Helsinki. His strong designs reflect the patterns of nature and the architecture of his home land just as the spirit of his compatriots – Stepan talks about the birth of his signature moon face grimace in his anniversary booklet (p40): “Everyone here in Finland floats around with an aura of slight melancholy. So a smiling Moon was out of the question. Instead, I decided to give the Moon an aristocratic melancholy, with a bit of indecision as to whether he is happy or sad in nature. The expression of the Moon […] just ‘is’ – the same as the people here.”

His Moon first rose on an MB&F model in 2012, when the first “MoonMachine” based on the Horological Machine N°3 Frog was presented. In that piece, the enigmatic Moon circulated in the smiling mouth of the frog under its huge eyes.

Just a few weeks before Elon Musk put his Tesla on orbit around the Sun, Stepan Sarpaneva shot Maximilian Büsser’s “Can-Am” inspired Horological Machine N°8 to the Moon, too. As they say, when Stepan saw the HM5 in 2012 he put forward the idea of filling the gap between the projected hour and minutes indicators with a moon phase. The limited HM5 ended in 2014, but the projected disks with the prism continued their story in the HM8. The duo decided to take the chance and implement Stepan’s idea into this model, which became this year’s MoonMachine 2. 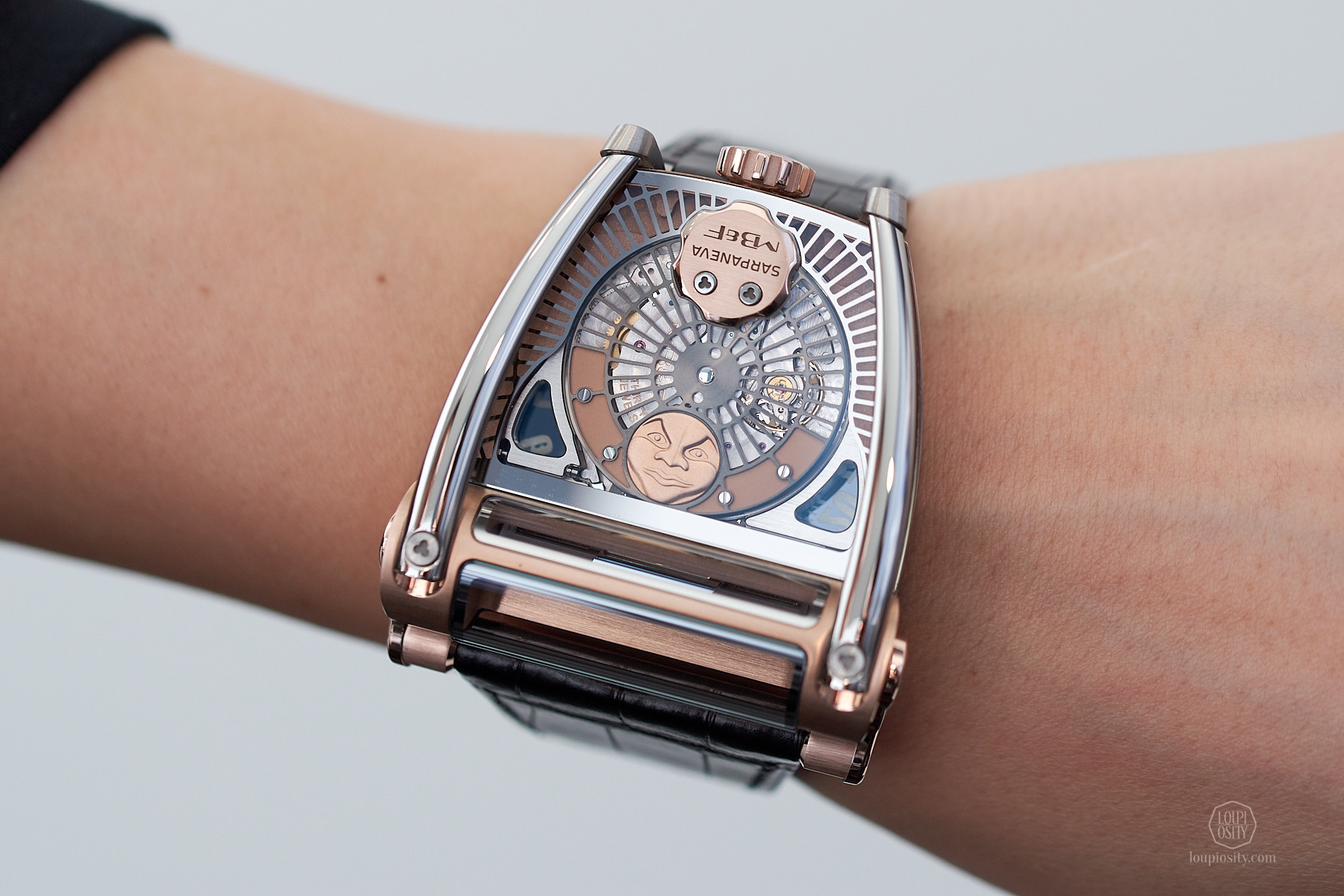 The chassis and the engine are the same, but pimped by Sarpaneva with a self-created moon phase module as well as his signature design elements. The indecisive Moon moves left and right with the rotor, while perpendicular to it, another face is visible between the hour and minute indicators. In fact, the latter is the moon phase indicator, which shows the projected image of two Moon appliqués situated in the opposite corners of the same disk. The tiny golden heads are 4.5 mm in diameter with the thickest part being 0.35 mm; the thinnest part around the eyes is 0.07 mm. No wonder that the success ratio of completing a head is only 20%. Sarpaneva’s team will make around 360 such heads until the 72 needed is born (there are 2 on each moon phase disks and the watch is limited to 36 units). 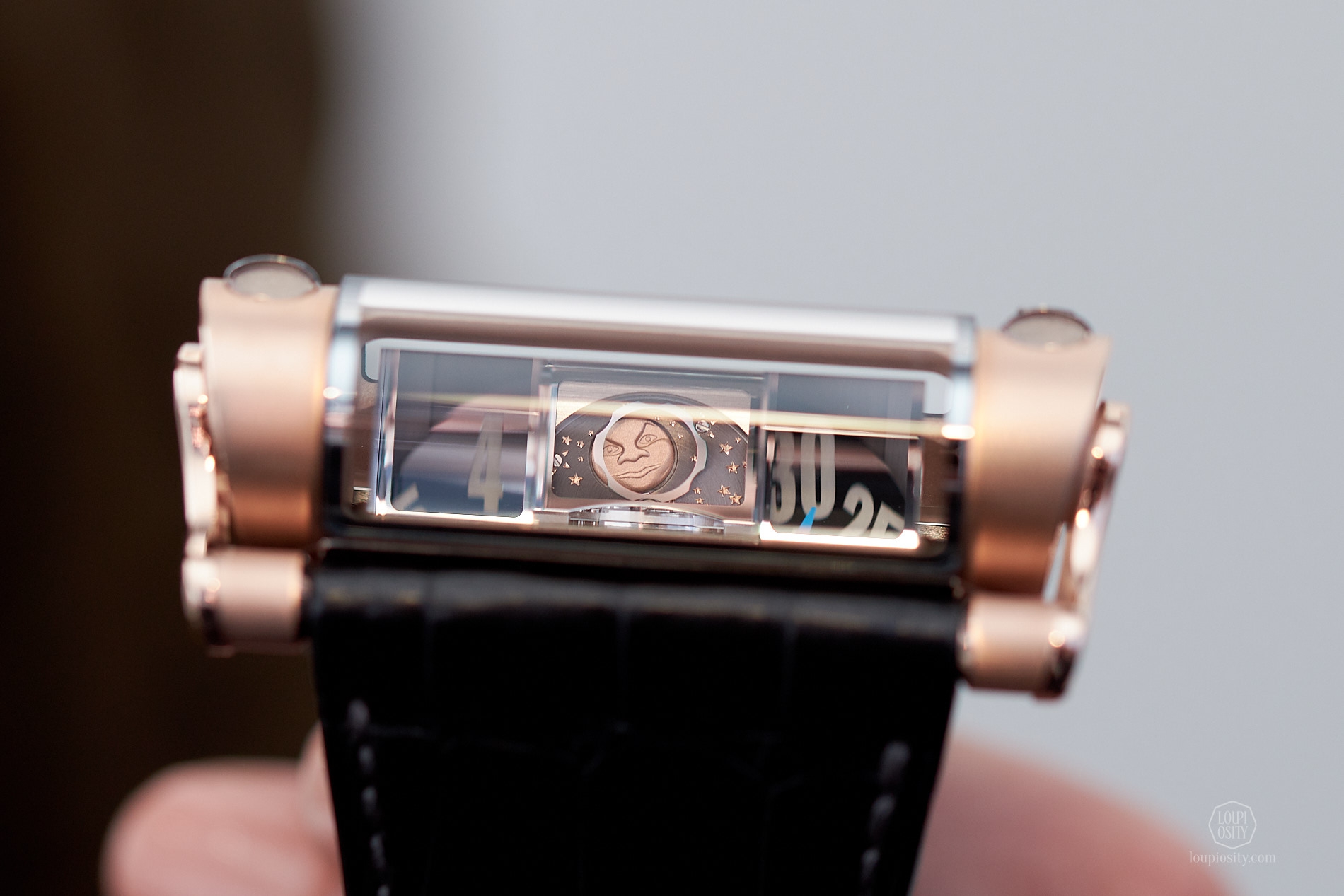 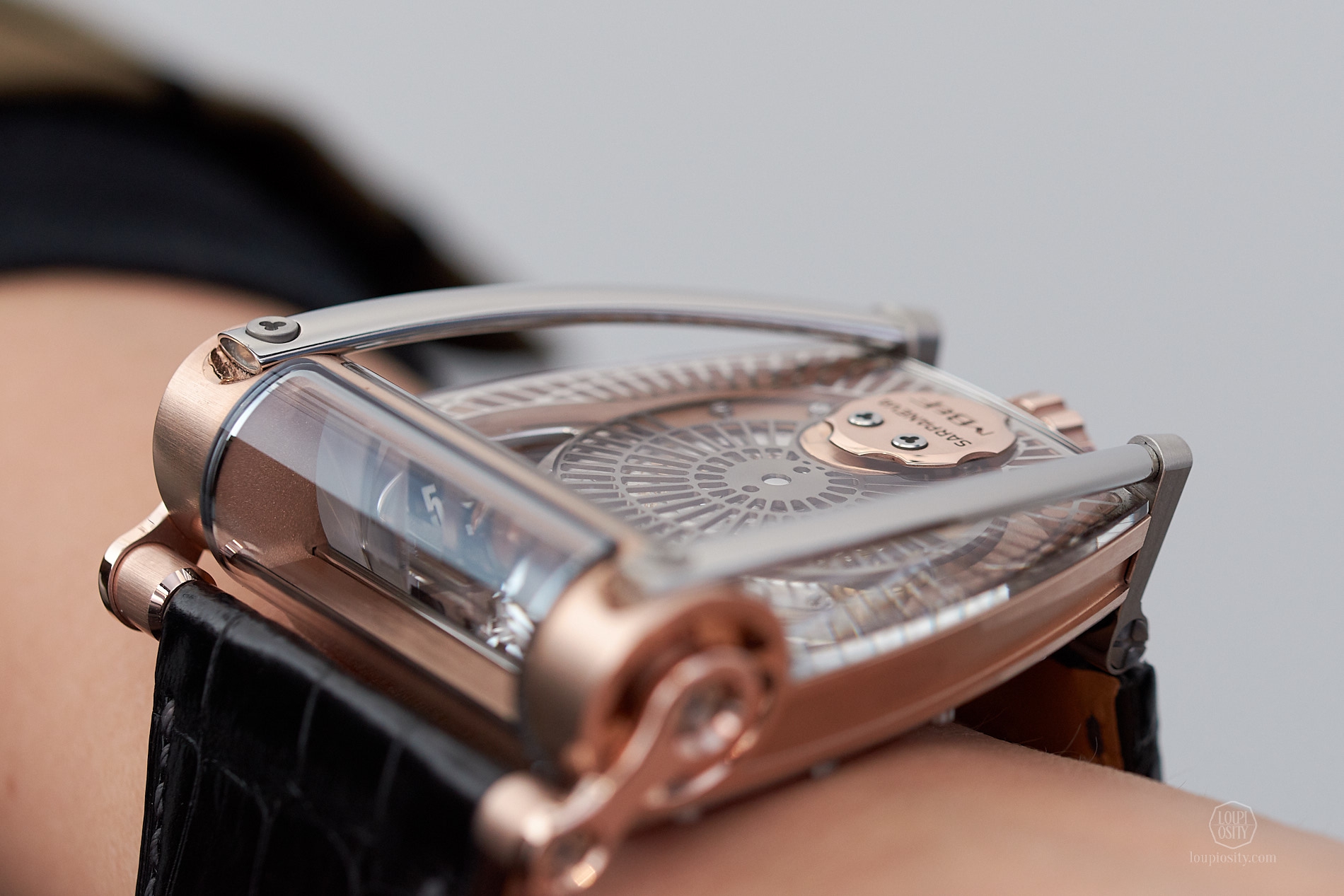 The “battle-axe” rotor of the HM8 was also replaced by an open-worked structure. Stepan actually borrowed this pattern from the iron gratings on the streets of Helsinki: “There are things that stay long time inside my bony head – and when the moment is right I get an idea and start to work on it.” Having appeared first on his Korona models, it made its way to a prominent place on the MoonMachine 2. The pattern goes beyond the rotor and it melts into the sides of the case.

The whole playful concept works together and you can tell that collaboration was less guarded by contracts and more supported by shared humour and principles. 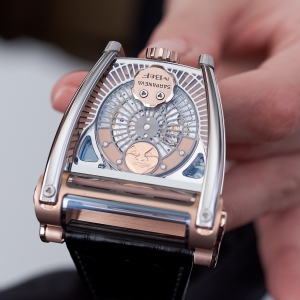 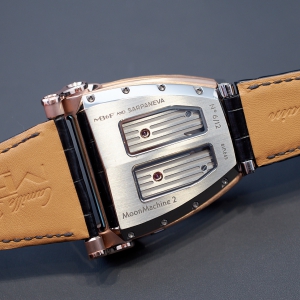 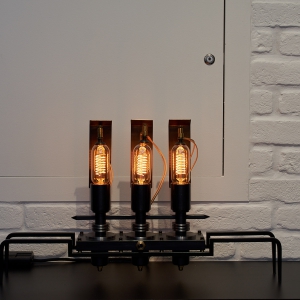 M.A.D.EDITION In June 2021 MB&F offered a special watch to its ‘Friends’, the M.A.D.1, under a different label, M.A.D.Edition. The appearance of the watch on social media stirred the water of the mechanical watchmaking.MB&F and H.Moser & Cie join forces - ‘united we stand among… MB&F and H.Moser & Cie are co-signing a pair of creations whose DNA blends the main characteristics of each. This June the Endeavour Cylindrical Tourbillon H. Moser × MB&F and the LM101 MB&F × H. Moser are released.MB&F Legacy Machine Perpetual Palladium We previewed the MB&F Legacy Machine Perpetual Palladium at the Geneva Watch Days 2021 - discover it with us.