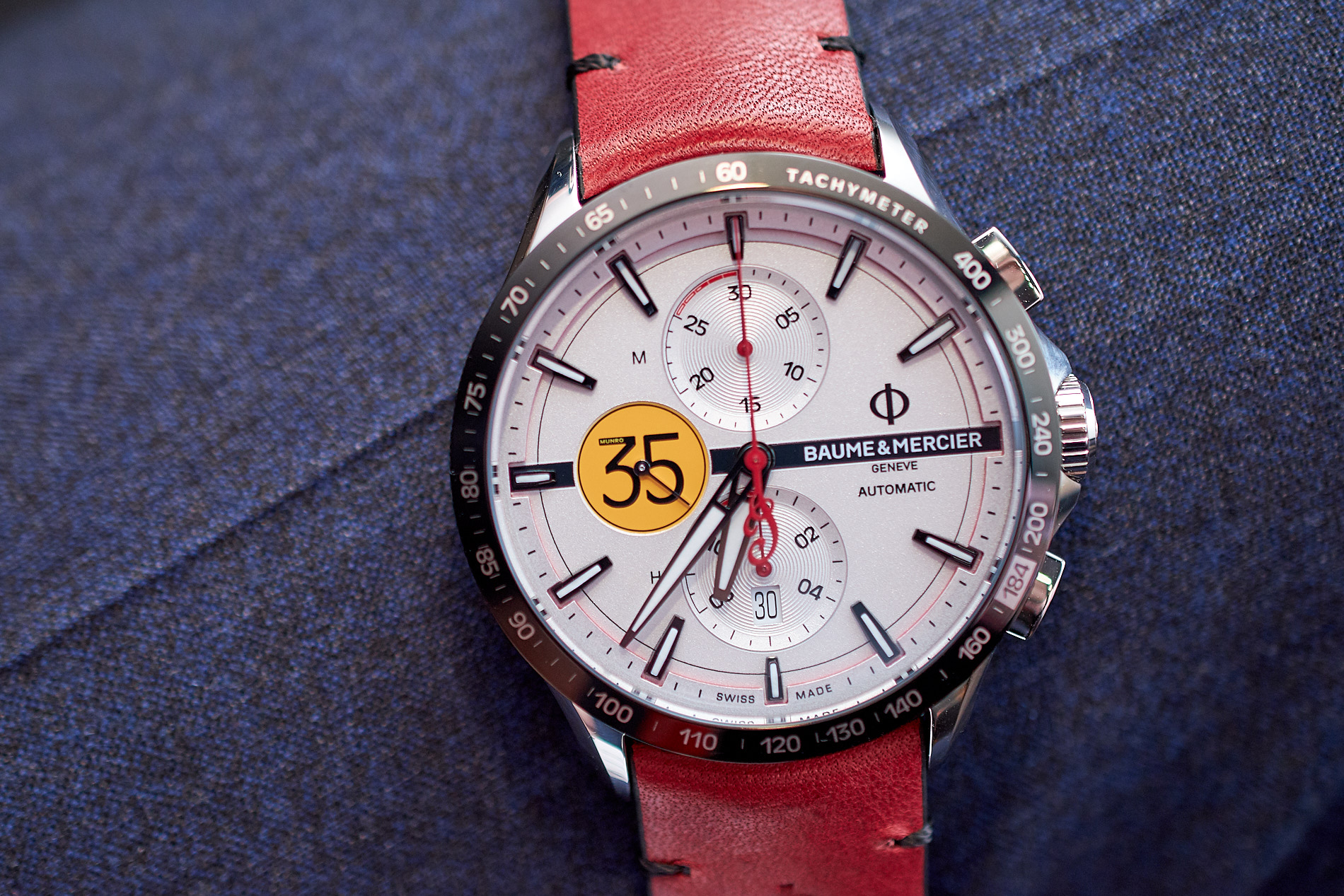 A big step for Baume & Mercier was the announcement of its new Baumatic movement developed together with Manufacture Horlogère ValFleurier and the Richemont Research & Innovation teams. We saw the new Clifton equipped with the Baumatic calibre and the speedy Clifton Club Indian® Burt Munro Tribute model at the SIHH.

At the SIHH 2018, Baume & Mercier came out with its first own mechanical self-winding movement called the Baumatic. Having “in-house” mechanical movements is a recurrent question in watchmaking: on the one hand you get freedom from suppliers; on the other hand it can increase production costs. Baume & Mercier had been ripening the thought of developing its own base calibre for years. They emphasised that it was important to feature authentic advantages while remaining affordable.

Developed in collaboration with Manufacture Horlogère ValFleurier and the Richemont Research & Innovation teams, the movement responds to four sensitive fields of watchmaking: the issue of magnetic fields, the efficiency of the power reserve, accuracy and the durability of the movement. 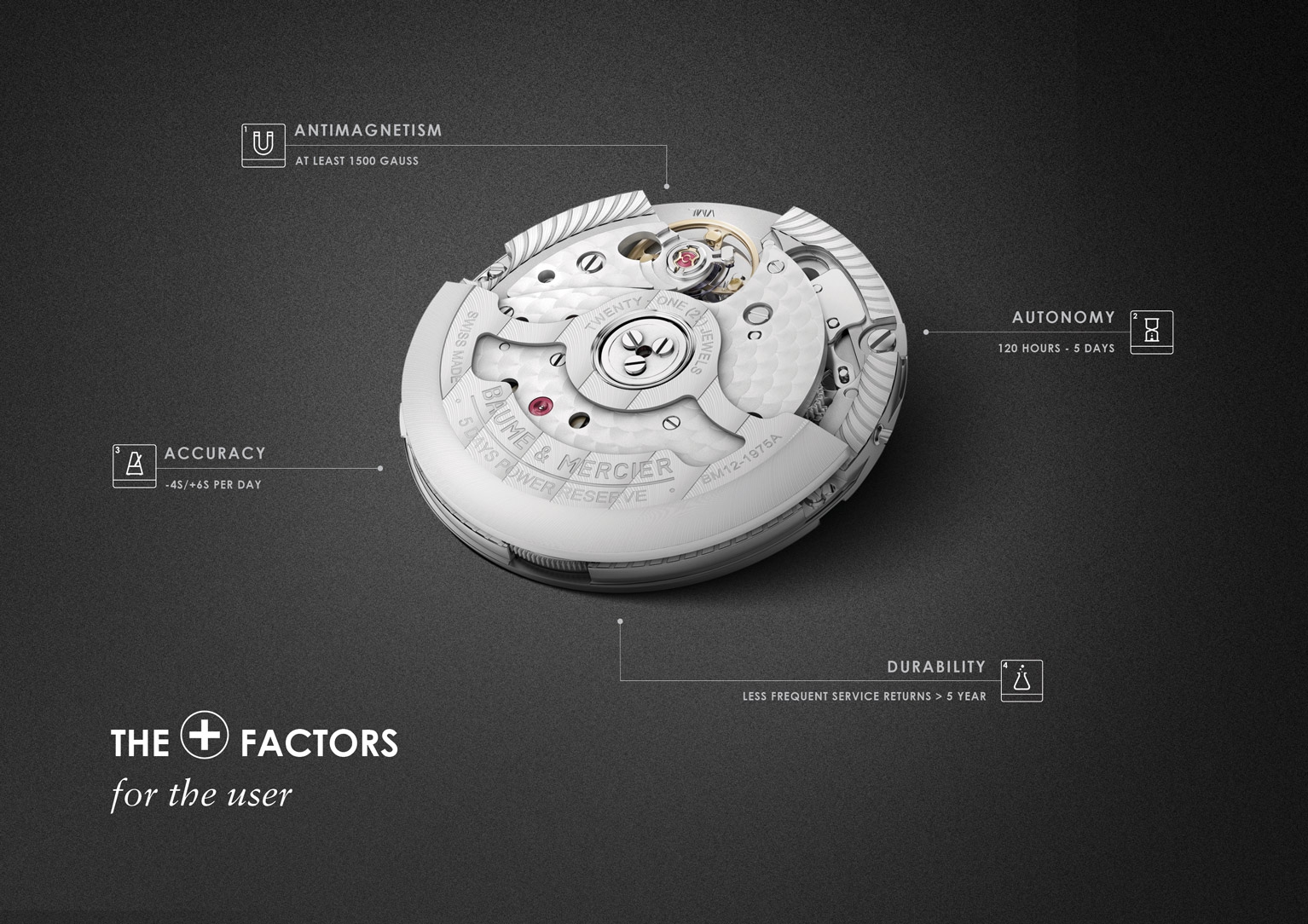 The hairspring, the anchor and the escape wheel are resistant to the effects of magnetic fields up to 1500 Gauss thanks to the use of silicon. The high-performance escapement is equipped with the Powerscape technology, which is an anchor and an escapement wheel with a special geometry. Less friction reduces the need for lubrication and it results in 30% more running time.

The hairspring is made by the Twinspir™ technology – a trademark and brand of Richemont. As the brand describes: “it is applied to a new hairspring with a composite structure, combining two cores of silicon, alternately set at a 45° angle and bound by a silicon dioxide layer that also plays a role in ensuring thermocompensation.” As a result, the movement is more resistant to corrosion and less sensitive to small impacts and also ensures a 120 hour power reserve. These, along with fewer lubricants, necessitate less maintenance.

The Clifton Baumatic is the first model the calibre was placed in. In terms of looks, it exudes elegance with clean lines and simple shapes. It is available in three classic designs and a fourth COSC-certified chronometer version.

The latter has 5-days power reserve and bears the classic Clifton design: white dial with a porcelain-like finish, hour and minute time markers and a date aperture at 3 o’clock. 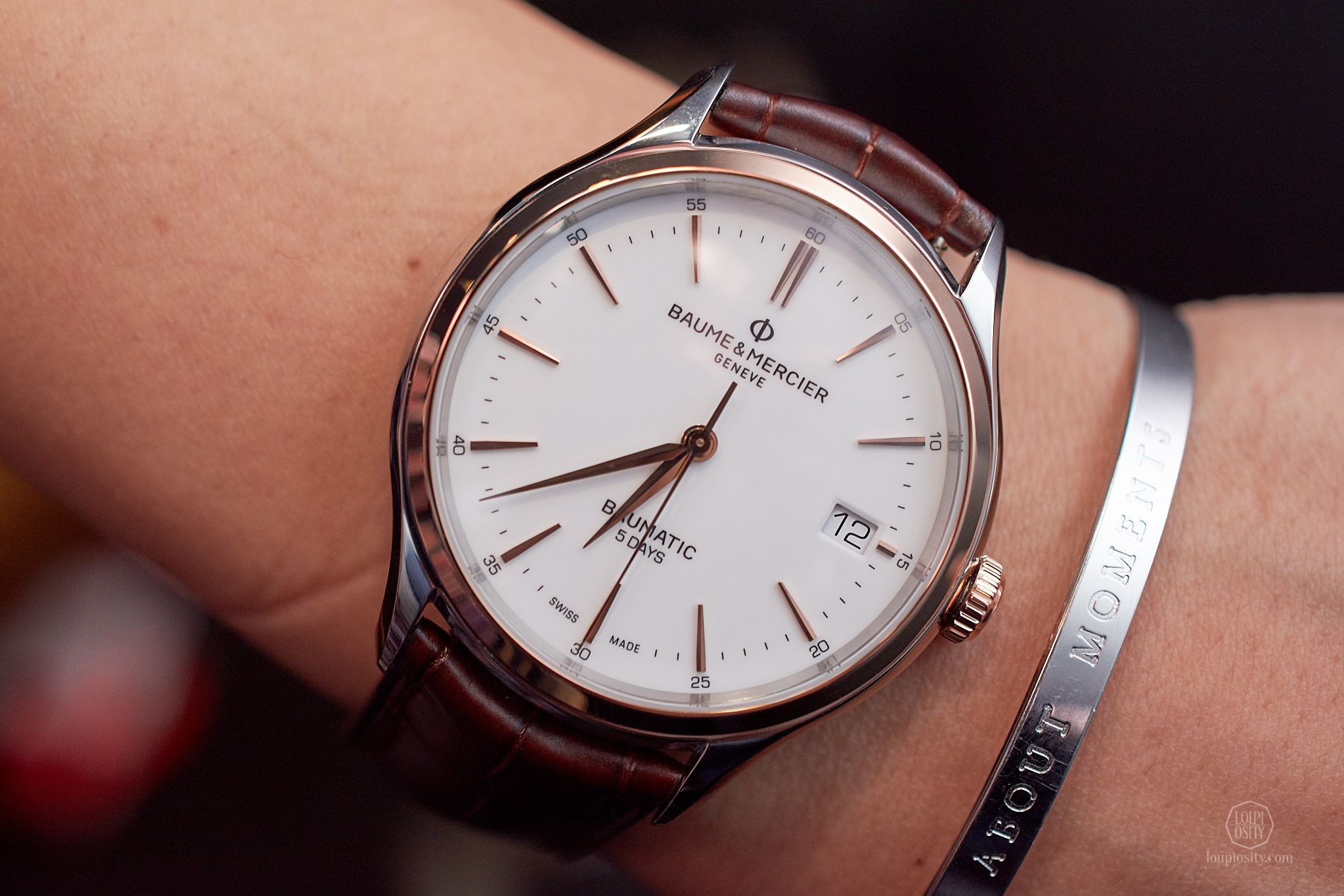 On the occasion of the 50th anniversary of Munro’s iconic land speed record, Lee Munro, Burt Munro’s great nephew, recreated the historic run at Bonneville on August 13. “We are very proud and honoured to partner with Indian Motorcycle,” said Alain Zimmermann CEO of Baume & Mercier. “Our agreement is cherished by our common pursuit of perfection, quality and craftsmanship, translated all in iconic design and contemporary aesthetic. Our brands have both strong- shared values and exude exceptional spirit.”

Indian Motorcycle® was founded in 1901 by the entrepreneur George Hendee and the renowned engineer Oscar Hedstrom. The “American Indian” name was chosen to embody freedom and adventure and something spiritual, just like the Native American Indians. Since the founders shared a passion for racing, their important goal was to drive faster, perform better and continually improve the technology. During the 1910s, Indian became the largest manufacturer of motorcycles in the world. Indian’s most popular models were the Scout, made from 1920 to 1946, and the Chief, made from 1922 until 1953. 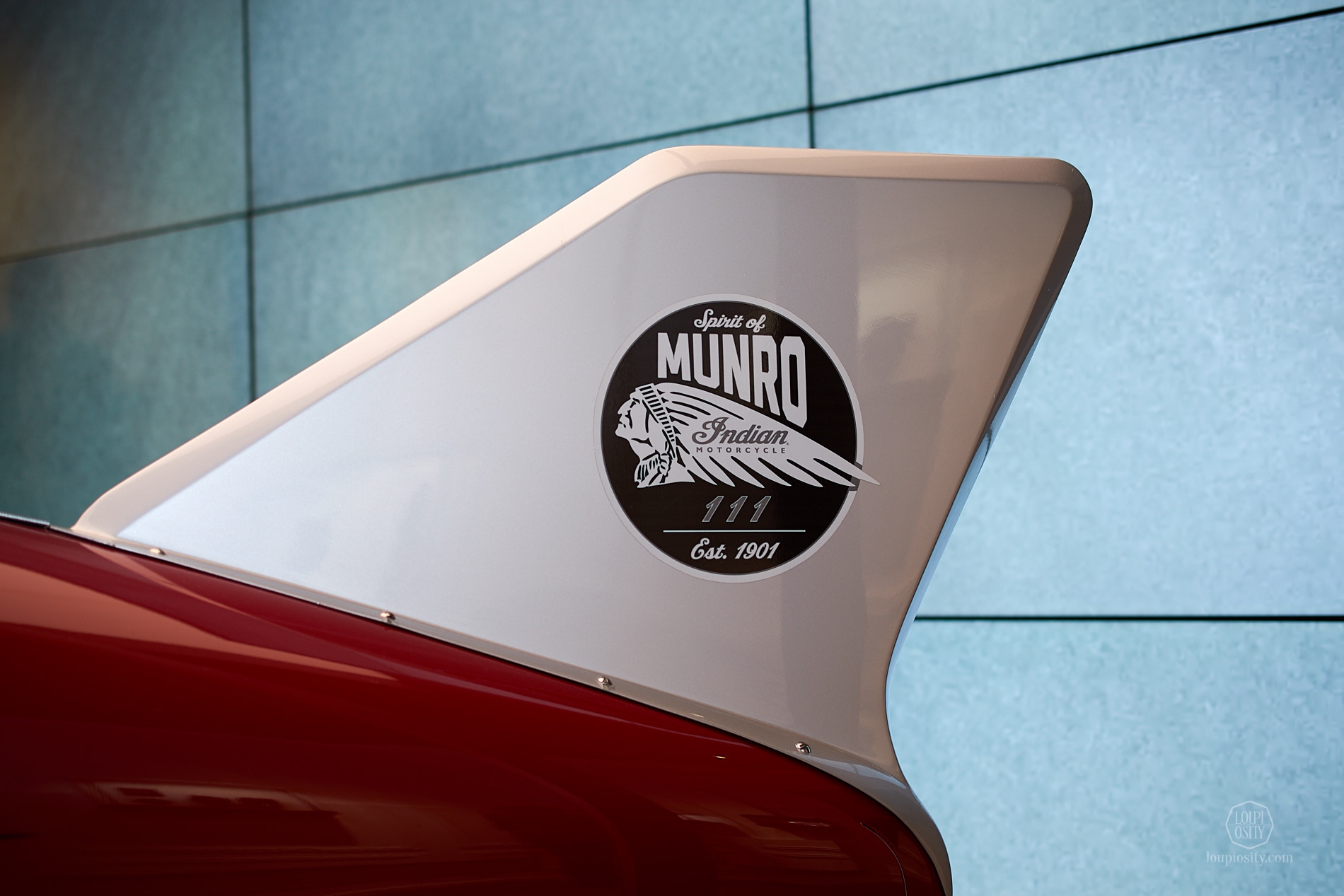 Herbert James “Burt” Munro (1899 – 1978) was a New Zealand motorcycle racer. He had a genuine “need for speed” – he started to ride the fastest horse across his family’s farm at an early age and later became a professional speedway rider.

In the 1940s, Munro started claiming a number of New Zealand land speed records. In 1967 – at the young age of 68 – he made motorcycle history by setting a new official land speed record – 184.087 mph with an unofficial top speed of 205.67 mph. He raced with his heavily modified 1920 Indian Scout Streamliner across the Bonneville Salt Flats in Utah, USA. (The epic record was also depicted in a film staring Anthony Hopkins as Burt Munro.)

Paying tribute to this 50th anniversary, Baume & Mercier designed the Clifton Club Indian® Burt Munro Tribute, limited to 1967 pieces. The stainless steel watch has a fixed bezel in polished steel-ADLC with an engraved tachymeter scale (the 184 mph highlighted as a nod to the land speed record achieved in 1967). The sandblasted silver-coloured dial features snailed chronograph’s counters, a sub-counter in yellow with Burt Munro’s lucky number (35) and “Indian Red” chronograph’s seconds hands with the “I” of Indian Motorcycle® logo. The watch looks best with its “Indian Red” calfskin strap with black stitching, but also has an additional black calfskin strap. 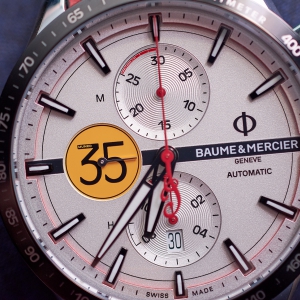 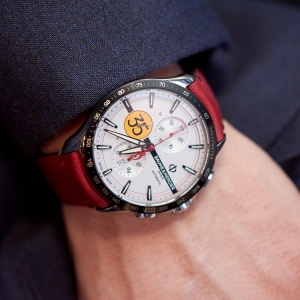 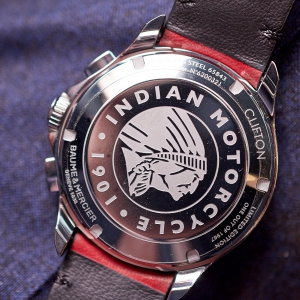 The stainless steel 44mm watch is named after Munro’s record-setting motorbike, the Indian Scout. Underlining the racing spirit it has an open-worked slate-grey and black dial, with a tachymeter scale on the bezel and multiple sub-dials. Baume & Mercier included some hints to the tribute: the chronograph counters designed to recall the speedometer, the date disc at 9 o’clock displays “1901” at the 19th day of the month to recall Indian Motorcycle® foundation’s date and of course the case-back is engraved with the logo of the moto-company. 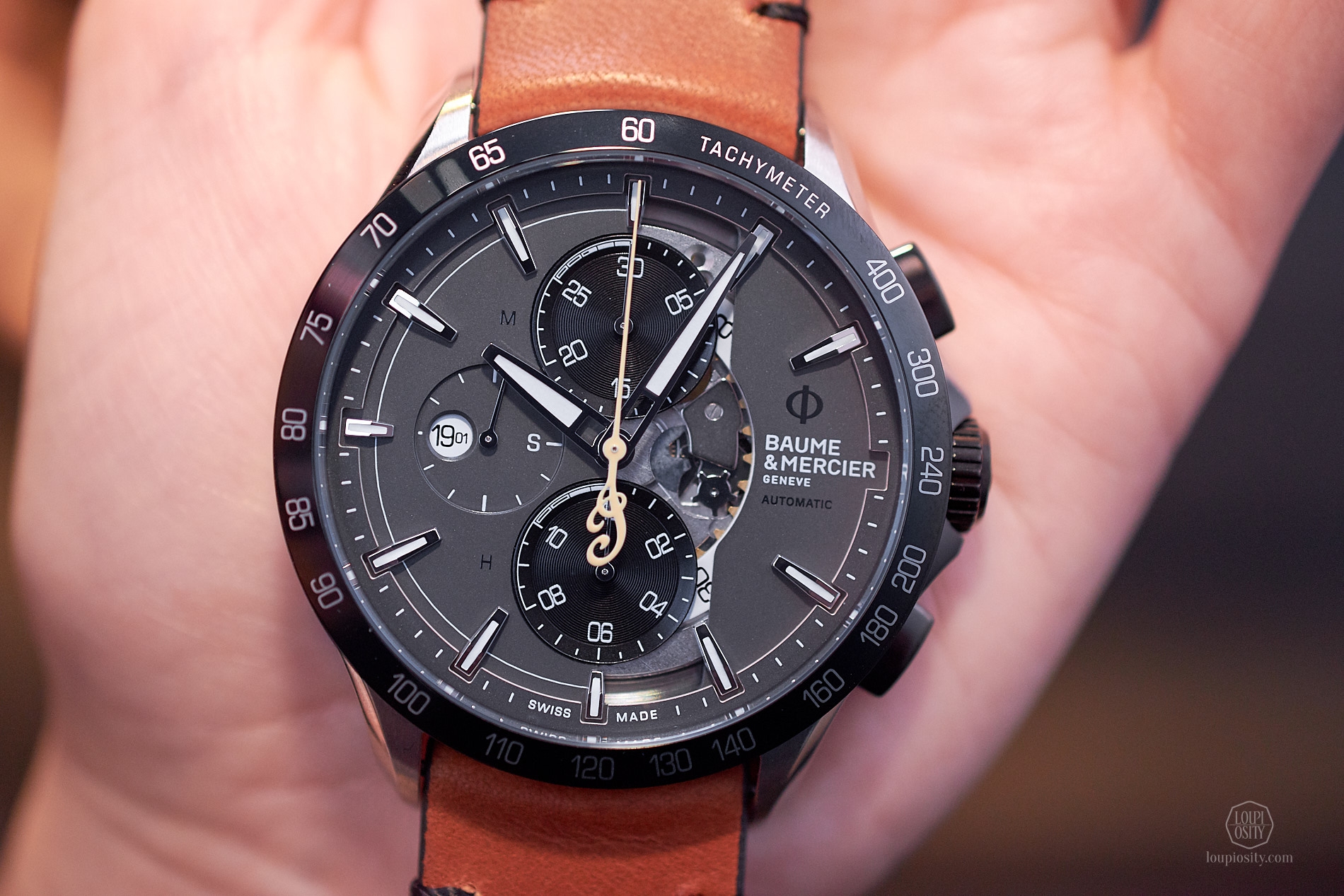