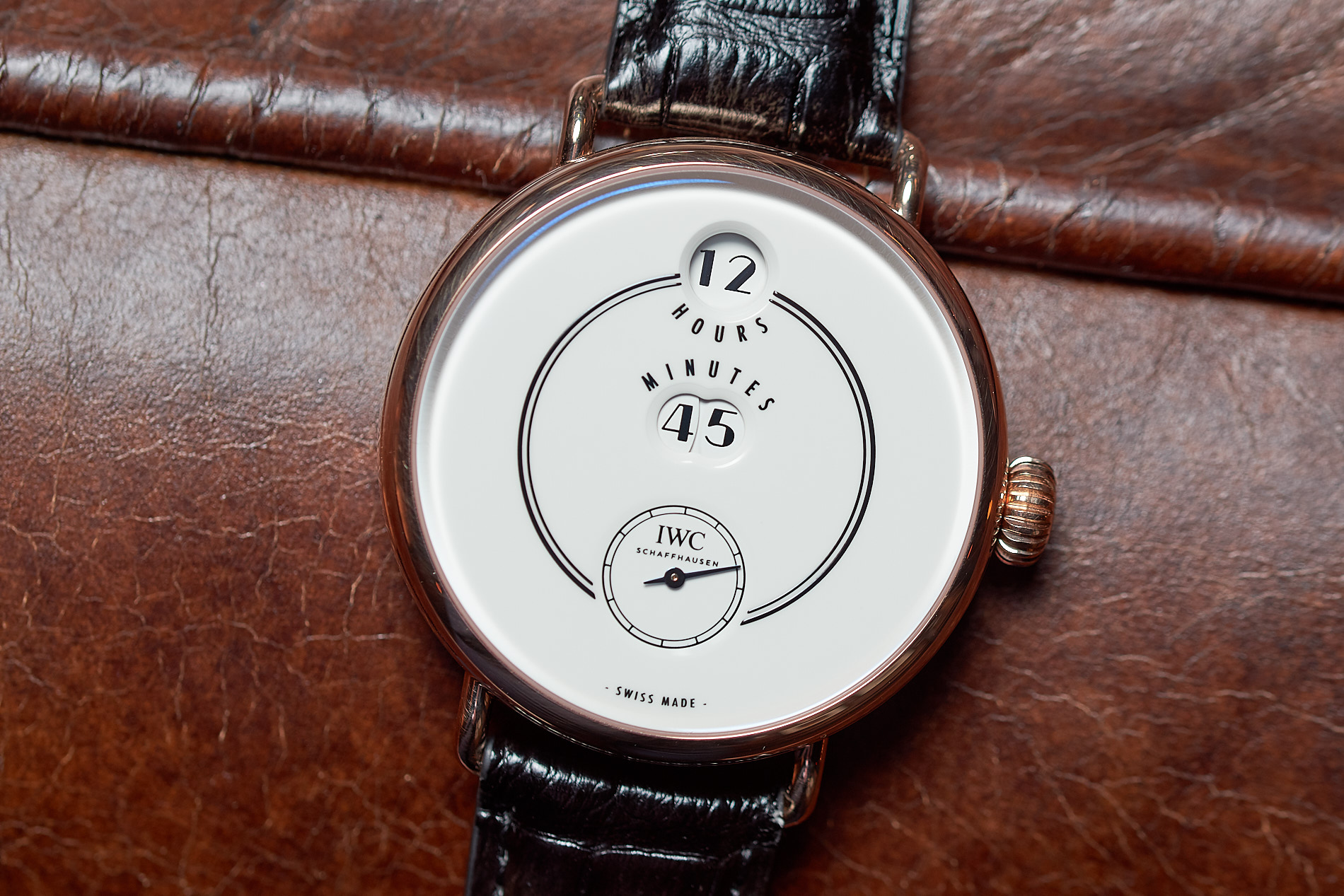 In 1868, Florentine Ariosto Jones backed up by his American compatriot Charles Louis Kidder registered the International Watch Co. in Schaffhausen. At the SIHH 2018, IWC celebrated the 150th anniversary of its establishment by presenting 27 Jubilee novelties in basically all collections. In this article we spend some time with Mr. Jones and introduce you to the most unusual piece that stands beyond any collection, the IWC Tribute to Pallweber Edition “150 Years”.

Jones opened the company in 1868 – aged only 27 but with some major experience behind his back. Born in New Hampshire (USA) he became a private of the Massachusetts infantry regiment when the U.S. Civil War broke out in 1861. Interestingly, he was enlisted as a “watchmaker”. Probably due to injuries he was withdrawn from the regiment in 1864 and went to work for E. Howard Watch & Clock, a well-known watchmaker in Boston. He witnessed the onset of the Second Industrial Revolution that brought about the explosion of steel production, the raise of the railroad magnates and the emergence of industrial processes providing greater efficiency. He recognised an opportunity in manufacturing high quality pocket watches in such an industrial model, therefore in 1867 in search of the right location to establish his watch company he set foot in Switzerland. He wanted to exploit the cheap specialised labour market to supply parts and movements to a US sister company, which would encase and sell them locally. Although he implemented the industrial approach in his Schaffhausen firm, sales figures did not meet the expectations. He saw the way out through raising the production numbers to push down the unit prices. The increased development costs and production overruns reached the level that liquidity ran out and creditor banks pushed for selling the company and inventories. Jones returned to the US and left watchmaking behind – he designed steam piping systems for the American Steam Appliance Company. He passed away in 1916.

The Rauschenbach family took over IWC in 1880 and many of today’s emblematic collections were established during their 75 years of reign – especially when Ernst Jakob Homberger the son-in-law of Johannes Rauschenbach-Schenk took over the management. We wrote about his contribution to IWC’s pilot watch heritage in 2016, when a new line of aviation watches emerged at SIHH. He was also the one who introduced the large and precise Portugieser watch.

The early Rauschenbach period produced a very interesting pocket watch too, based on a license obtained from an Austrian watchmaker Josef Pallweber. Pallweber developed a jumping hour mechanism that would display the hours and minutes through small apertures on rotating disks digitally. He patented it in Salzburg in 1883 and sold the license to multiple firms, including IWC. Between 1884 and 1890 IWC manufactured approximately 20,000 such pieces. 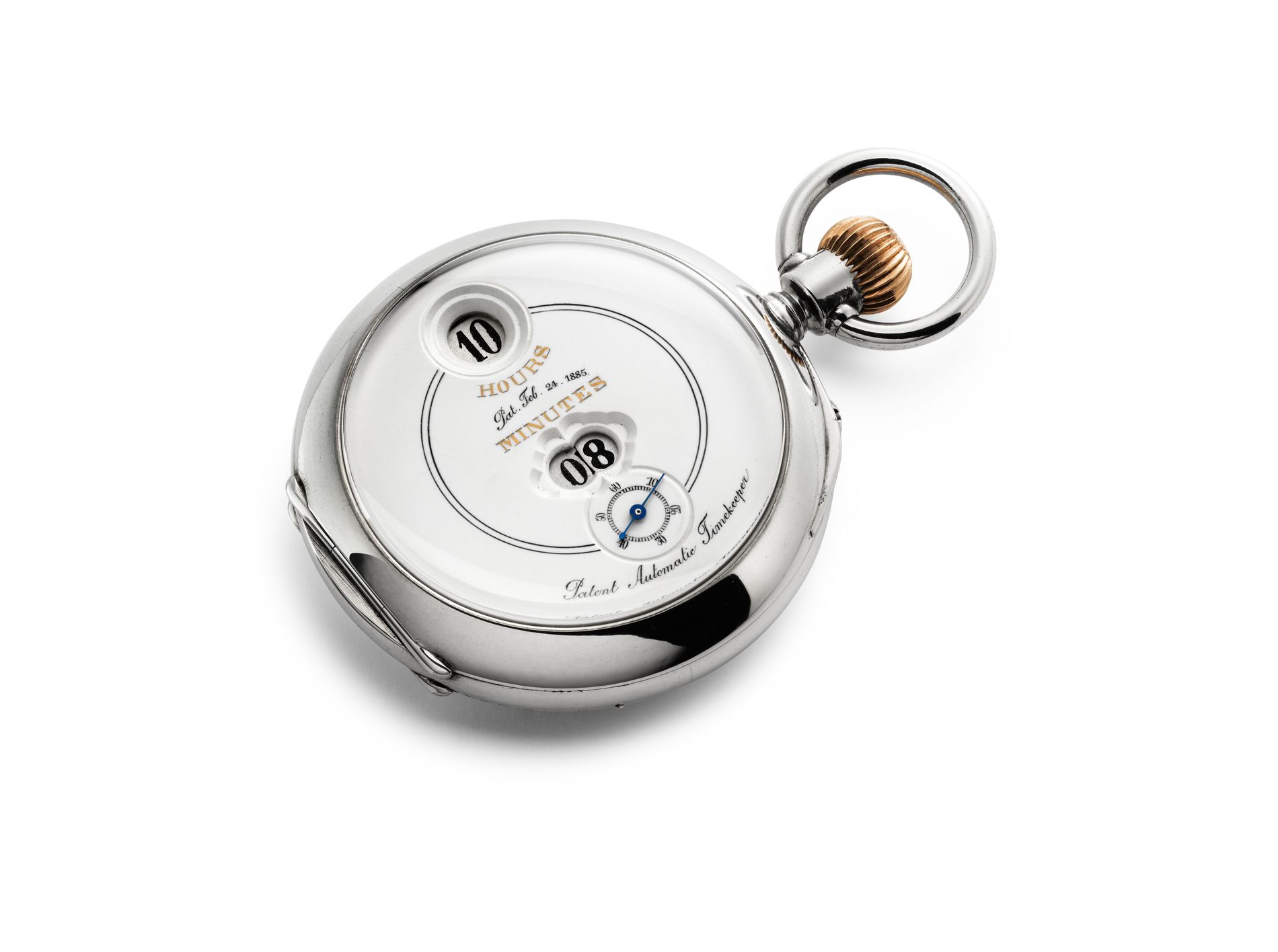 With such an attractive vintage look and the fact that it stands above all collections, the IWC Tribute to Pallweber Edition “150 Years” became the leading piece in the jubilee collection (you can find all other novelties in this article).

Just like the historical pocket watches, the 250 limited Jubilee wrist watch has a clean and legible dial with two apertures scripted “hours” and “minutes” respectively. Both are indicated by rotating disks.

In his patent Josef Pallweber described these displays with overlapping disks. For the minutes, he designed the full double digits (for example 60, 50, 40, …) to appear on the top dial with openings left for the single digits (for example 43, 26, …) that are shown by the lower disk. For the hours, he detailed two options: one displaying 24 hours and another for 12 hours. Interestingly, in the latter he rather split the numbers scale on the two disks 1-7 on one, and 8-12 on the second, giving an explanation to this solution himself: “By means of the arrangement of twin dials, as described, I am enabled to give the numerals thereon a greater space, and consequently make these numerals larger, so that they may be better seen than would be the case if but one dial were employed.” (source: patent)

In the Tribute timepiece by IWC, disks are arranged differently. Numerals 1-12 for the hours are inscribed on a ring and are visible through the aperture on the top. Minutes appear close to the centre of the dial, but disks are placed next to each other: double digits on the left, singles on the right. The energy required to rotate them are sourced from a separate barrel and wheel system, which is released in every 60 seconds by a special mechanism connecting the two wheel trains. The same locks it again immediately. The larger disk with the ones rotates the smaller in every ten minutes. As a result, the calibre 94200 has a 60-hour power reserve. 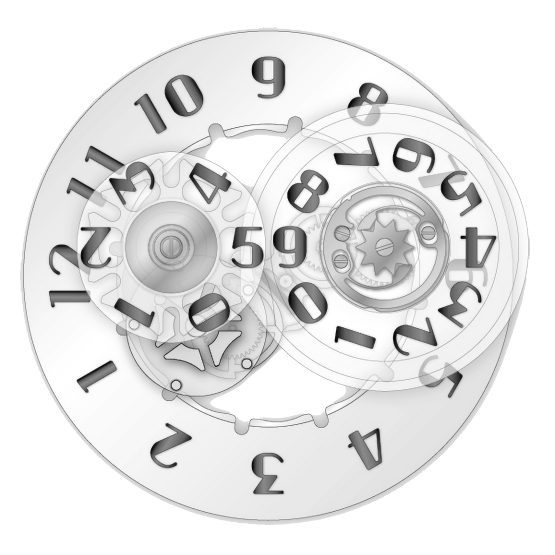 The funky move of the digital display is spiced up with beautiful typography from the early-1900s. Their spotlight is the white and smooth lacquered dial surface and the double concentric circle connecting the hours window and the rail of the small seconds. 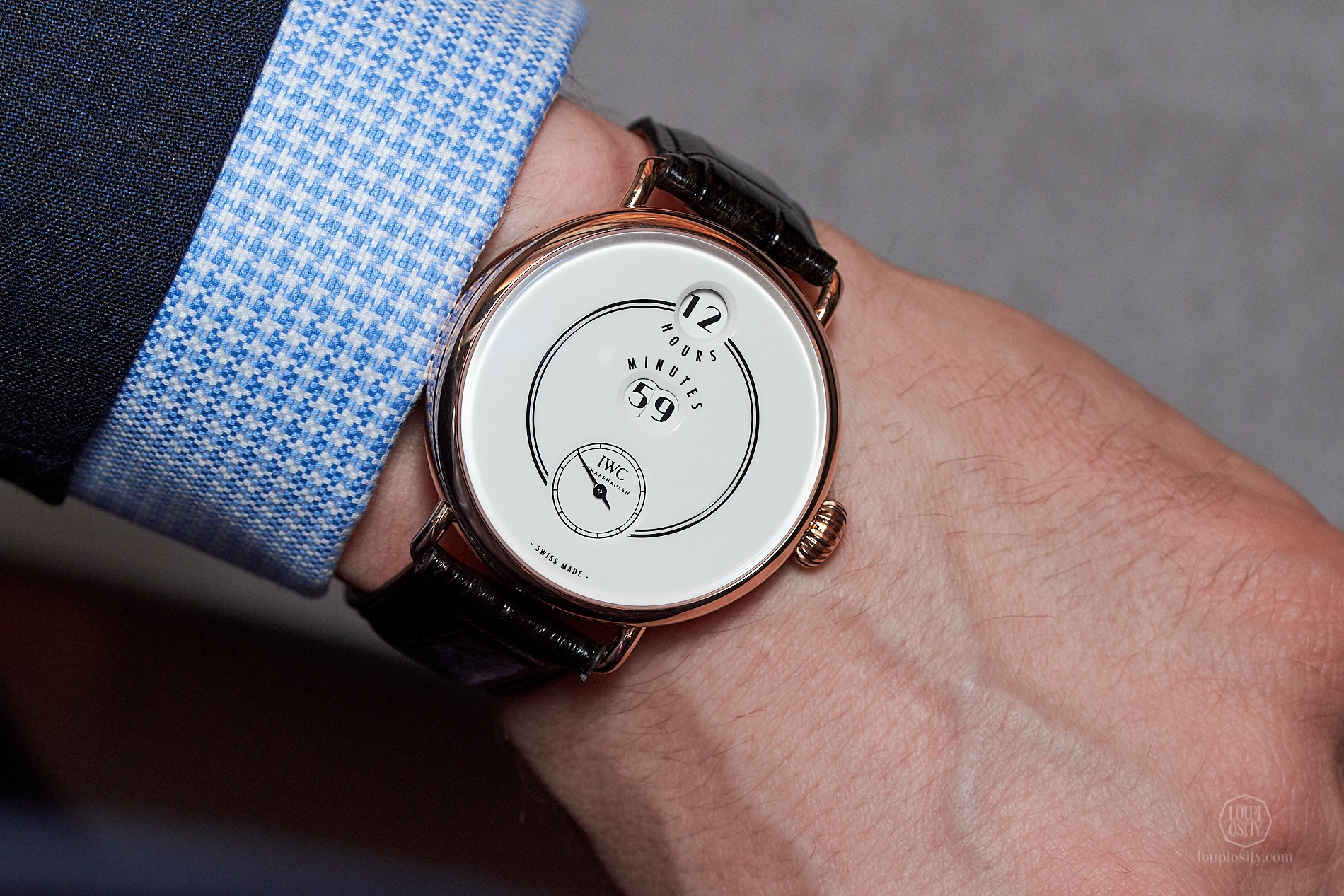 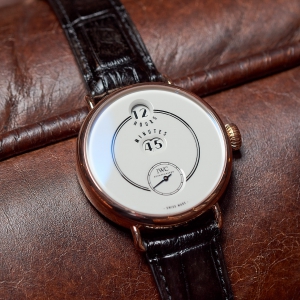 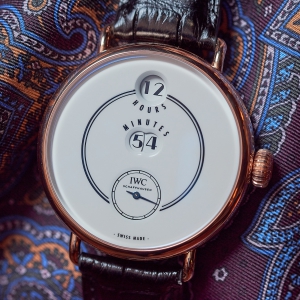 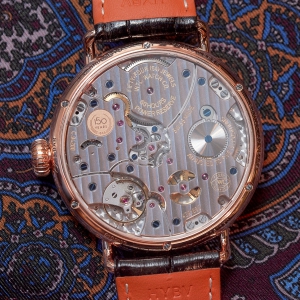 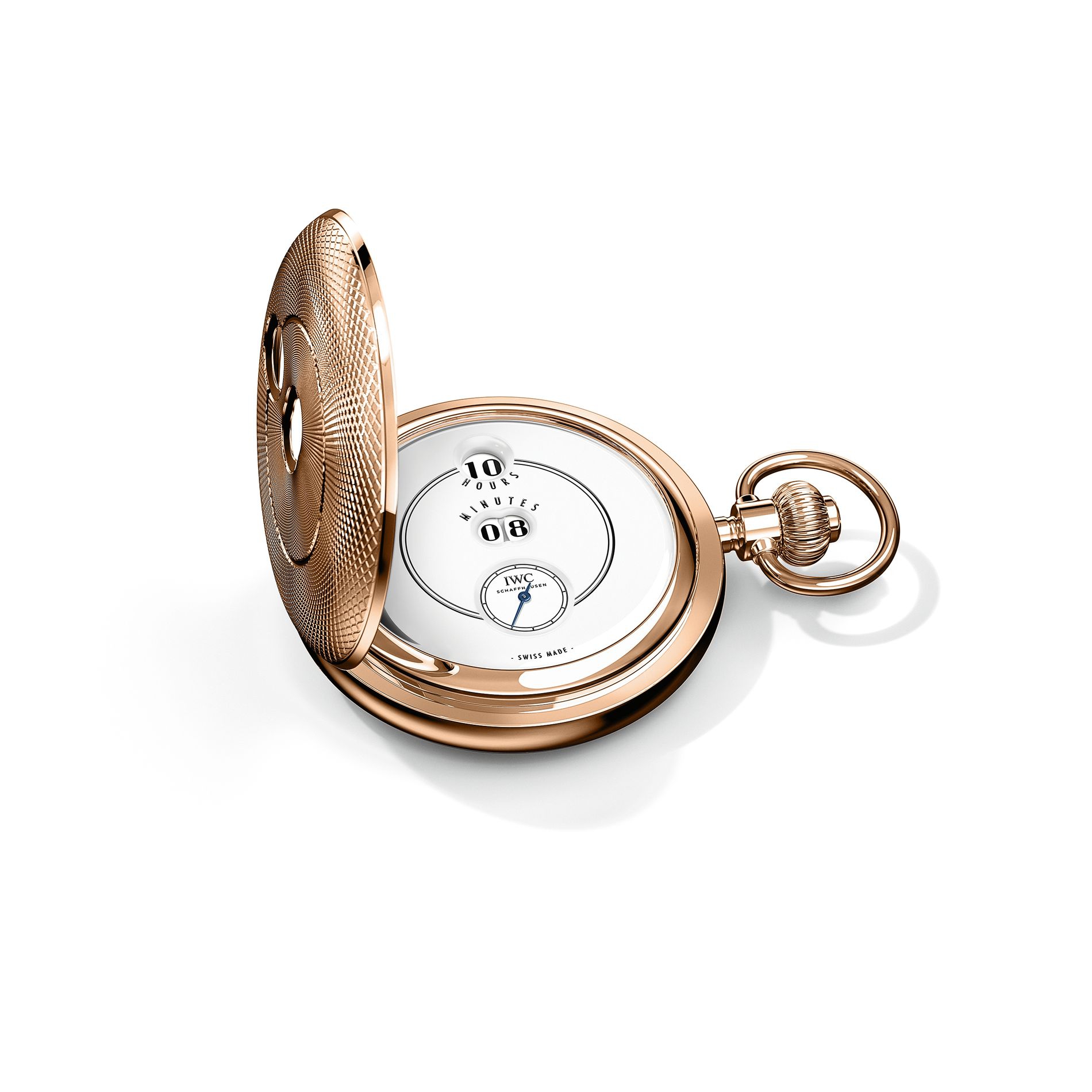 IWC Schaffhausen - Manufakturzentrum Following the launch of the exceptional anniversary collection and the Pallweber tribute watch at the SIHH, IWC went on celebrating its 150 years of history with a brand new Manufakturzentrum. Last week we saw the recently inaugurated facilities from the inside as well as from a bird’s-eye perspective.'Silver Spitfire' restoration This January IWC Schaffhausen announced to support two British pilots to accomplish a flying challenge: ‘Silver Spitfire – The Longest Flight’. Now the restoration of the aircraft is complete.Jaeger-LeCoultre at the 75th International Film… Jaeger-LeCoultre cultivates strong ties with the film industry and shows commitment to highlighting filmmaking culture. During the 75th International Film Festival of La Biennale di Venezia, the Grand Maison will celebrate the 13th anniversary of its partnership with event.