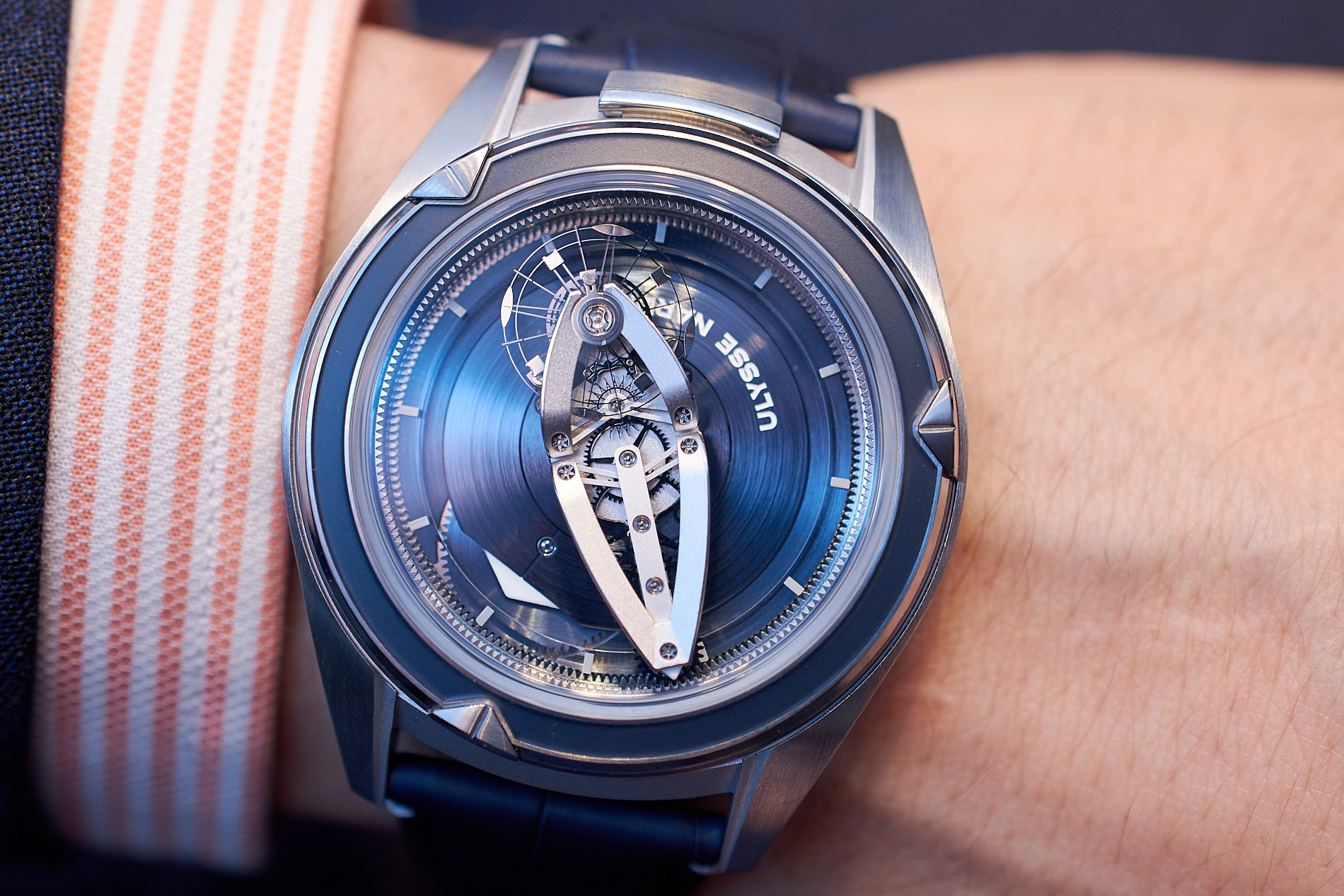 Ulysse Nardin took everything it takes to freak out the visitors of its SIHH booth. We submerged into their abyss to lay our hands on the new Freak and the Diver Deep Dive introduced at the show. Take a big breath!

Ulysse Nardin’s booth is worth a word or two. Have you heard of the exhibition entitled “Treasures From the Wreck of the Unbelievable”? It was the recent show of Damien Hirst the divisive contemporary artist in the Palazzo Grassi and the Punta Della Dogana in Venice. Hirst sculpted an entire collection around the “recovered” art pieces of an imaginary ancient collector (Cif Amotan II – an anagram for “I Am a Fiction”) that sunk with an imaginary ship somewhere on the Indian Ocean. 189 bronze, marble, malachite, rock crystal, silver and gold pieces of Mickey Mouse, the Shield of Achilles, a Giant Clam Shell, Hydra, Kali and other mythical creatures brought Hirst’s story alive in two of the most prominent Venetian galleries between September and December 2017.

Many of the pieces were bought by François Pinault (the father of François-Henri Pinault, CEO of the Kering Group), owner of the aforementioned venues as well as the majority shareholder in the Kering Group – the same company that owns Ulysse Nardin too. This explains how coral and shell covered Goofy and friends could greet the audience at Ulysse Nardin’s booth at SIHH. Next to them, the head of the “Penitent” was displayed with the brand’s slogan #FreakMeOut written above it. Colourful sea weed and coral provided the background to the novelties in the windows.

Behind the interesting art exhibition we found what we came for: the new automatic Freak Vision and the Diver Deep Dive. 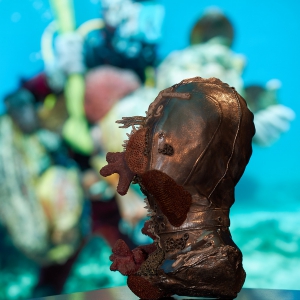 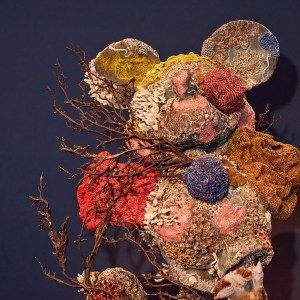 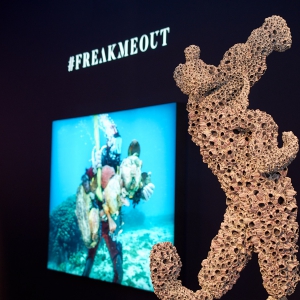 The Freaks, created by Rolf Schnyder and Ludwig Oechslin, have represented Ulysse Nardin’s most innovative timepieces since their appearance in 2001. Many new design and production methods as well as materials have been brought to market by the Freak collection.

The company showcased a concept watch in 2017 called the InnoVision2 with some really interesting developments. In 2018, the Freak Vision embeds some of these components in a serially produced timepiece.

Just like its predecessors the entire gear train and the escapement are carried around the clock by the revolving upper bridge. Unlike the previous Freaks, the energy for this is supplied by the movements of the hand transformed by a “grinding” self-winding system. Presented in the InnoVision2 it is approximately twice as efficient as a normal rotor, taking the tiniest kinetic energy onto the mainspring. It operates based on the phenomenon of elastic body deformation, made possible by the excellent physical attributes of silicon.

Silicon in such a dainty thin form can flexibly change shape as a result of external forces, store the energy and give it back by resetting the shape. In case of the “grinder” a monolith square-in-a-ring shape was fabricated, which can “shake” with the smallest wrist movement. This oscillating motion rotates the winding wheel situated above the barrel by small crawls. As a side-note, due to using small body deformations of a single silicon structure, friction has been again reduced to the minimum. 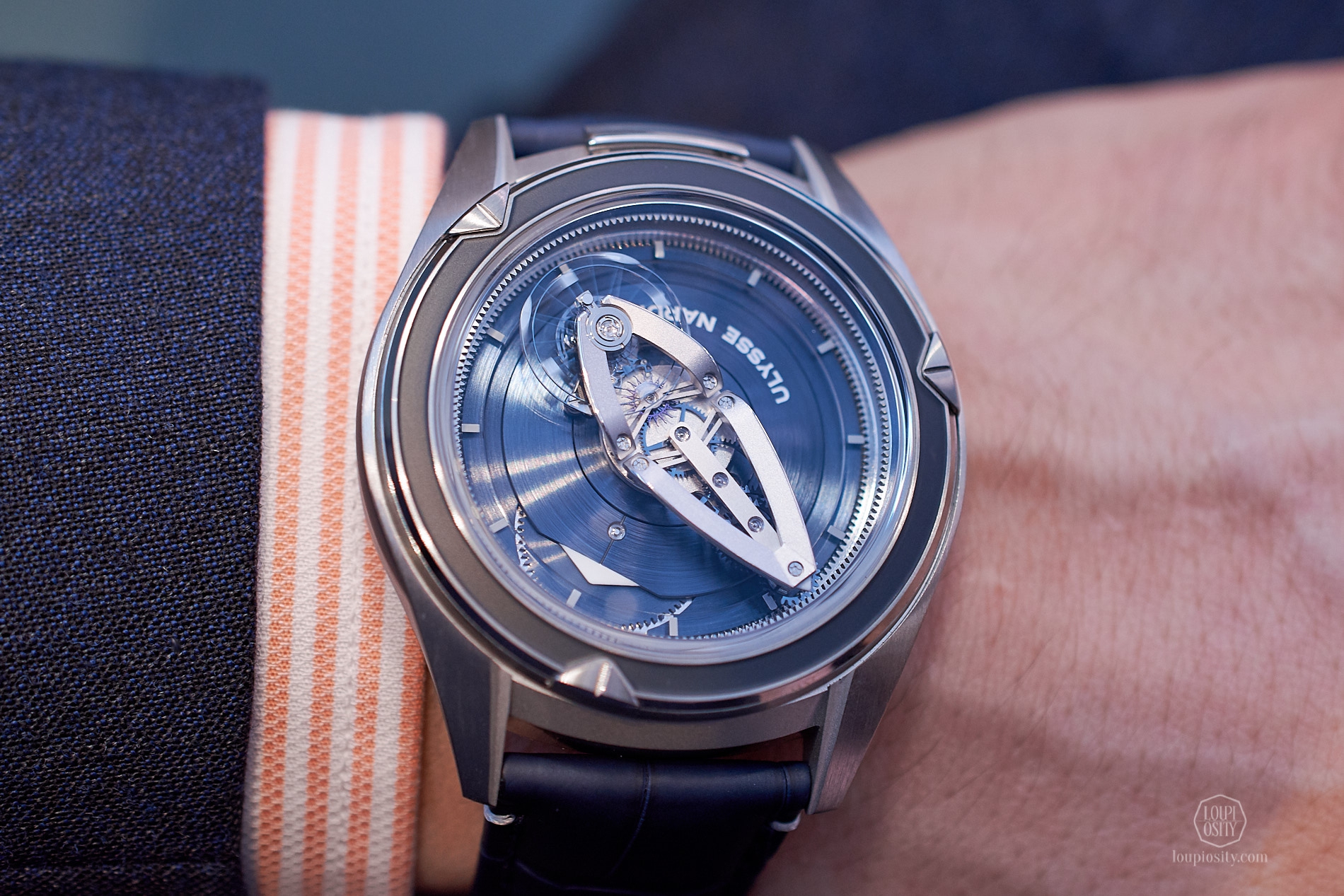 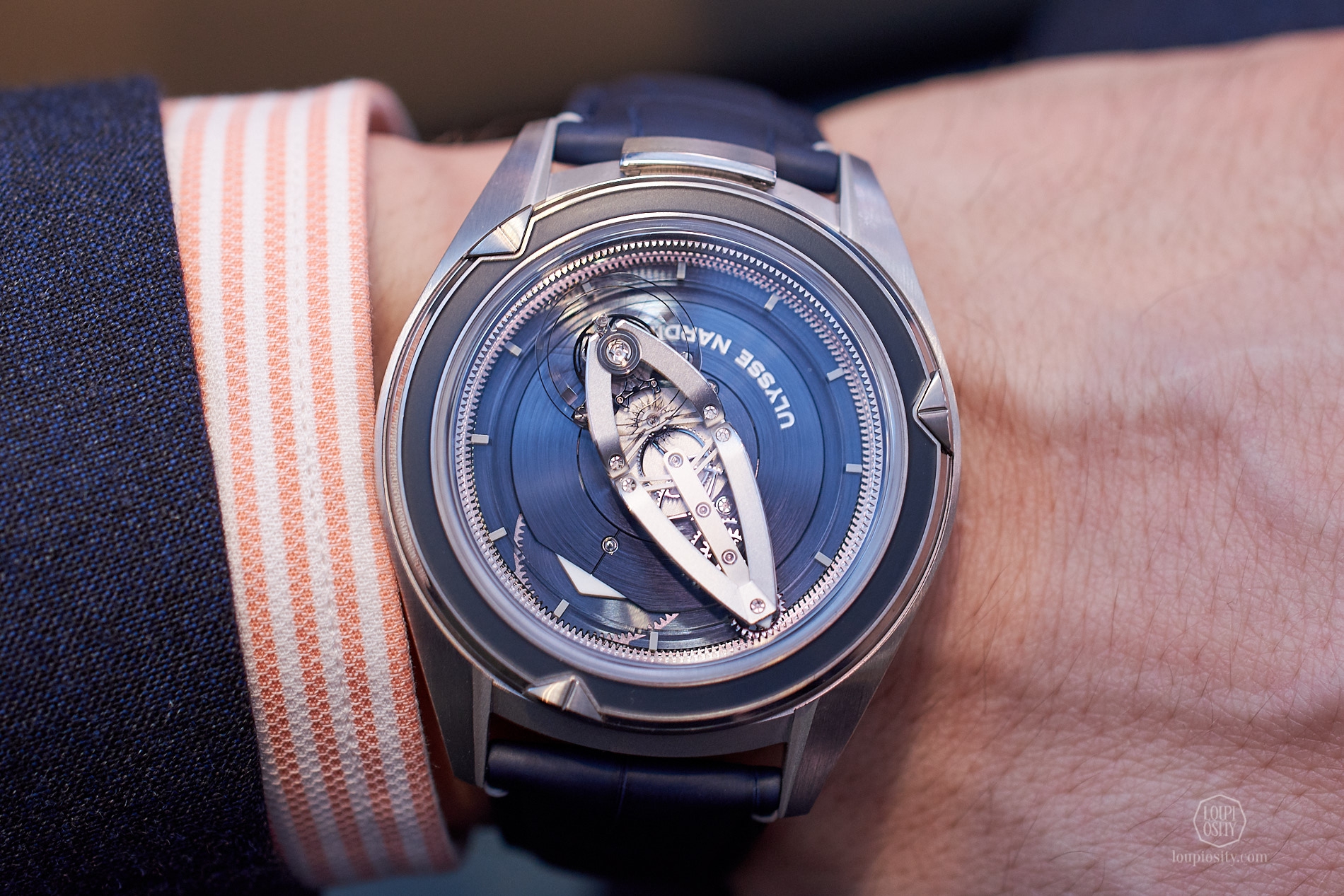 The same characteristic of silicon is used for providing constant impulses on the balance wheel. Ulysse Nardin’s Anchor Escapement was introduced in 2014 and it includes again a monolith silicon structure in which the pallet fork is suspended between deforming flat springs. Their direct snap through action moves the pallet fork this way or another with the constant energy coded in the well-defined and manufactured properties. (A great video showcases this here.)

Additionally, the balance wheel from InnoVision2 also made its way into the escapement. It is also silicon-based weighing almost nothing in the centre and boosted with nickel mass components outside for greater torque. “Micro-blades” on the spokes have stabilising function by being in contact with the air – altogether, they deliver greater accuracy.

The Freak is a captivating piece of technology in any version, but in terms of aesthetics my personal favourite remains last years’ Freak Wing. 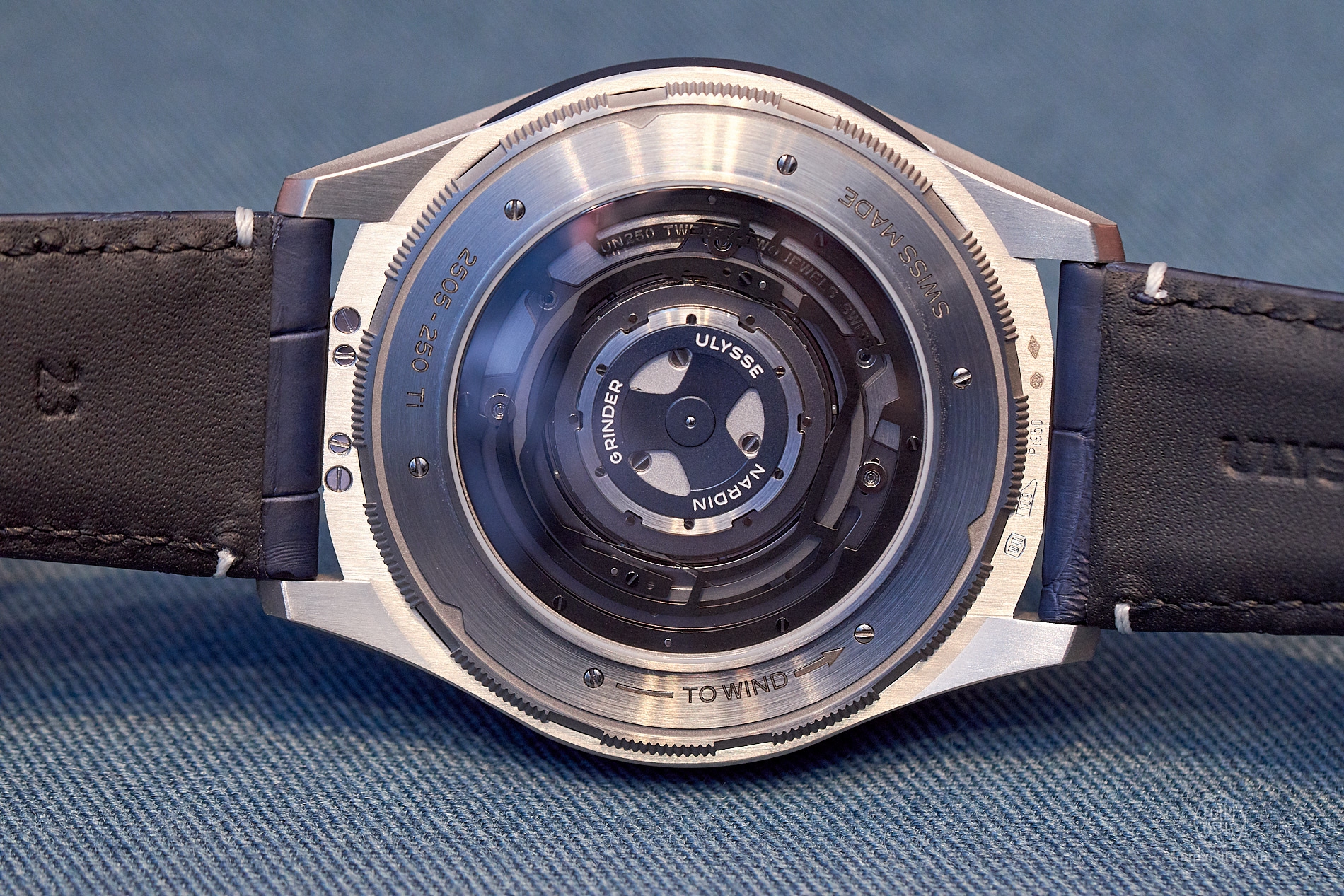 In 2016, the company introduced a bold limited edition Diver Chronograph with hammerhead sharks swimming on the dial. As if the 300m water-resistance would not be more than enough for observing these marvellous fish (they like warm waters so mainly swim at depths between 1m-100m), the manufacture came out with an even more durable 1000m depth-resistant timepiece this year.

With its robust body and circling hammerheads, the Ulysse Nardin Diver Deep Dive cries out for water. Silicon was used here once again for the escapement wheel, the lever and the balance spring in the in-house calibre UN-320. The helium release valve is at 9 o’clock, while the crown at 2 is protected by a guard. The latter makes the wearing over a wetsuit more comfortable as it is slightly displaced from the usual 3 o’clock position.

This watch is for serious diving – well beyond Hirst’s studio in real oceans and real depths. Gear up! 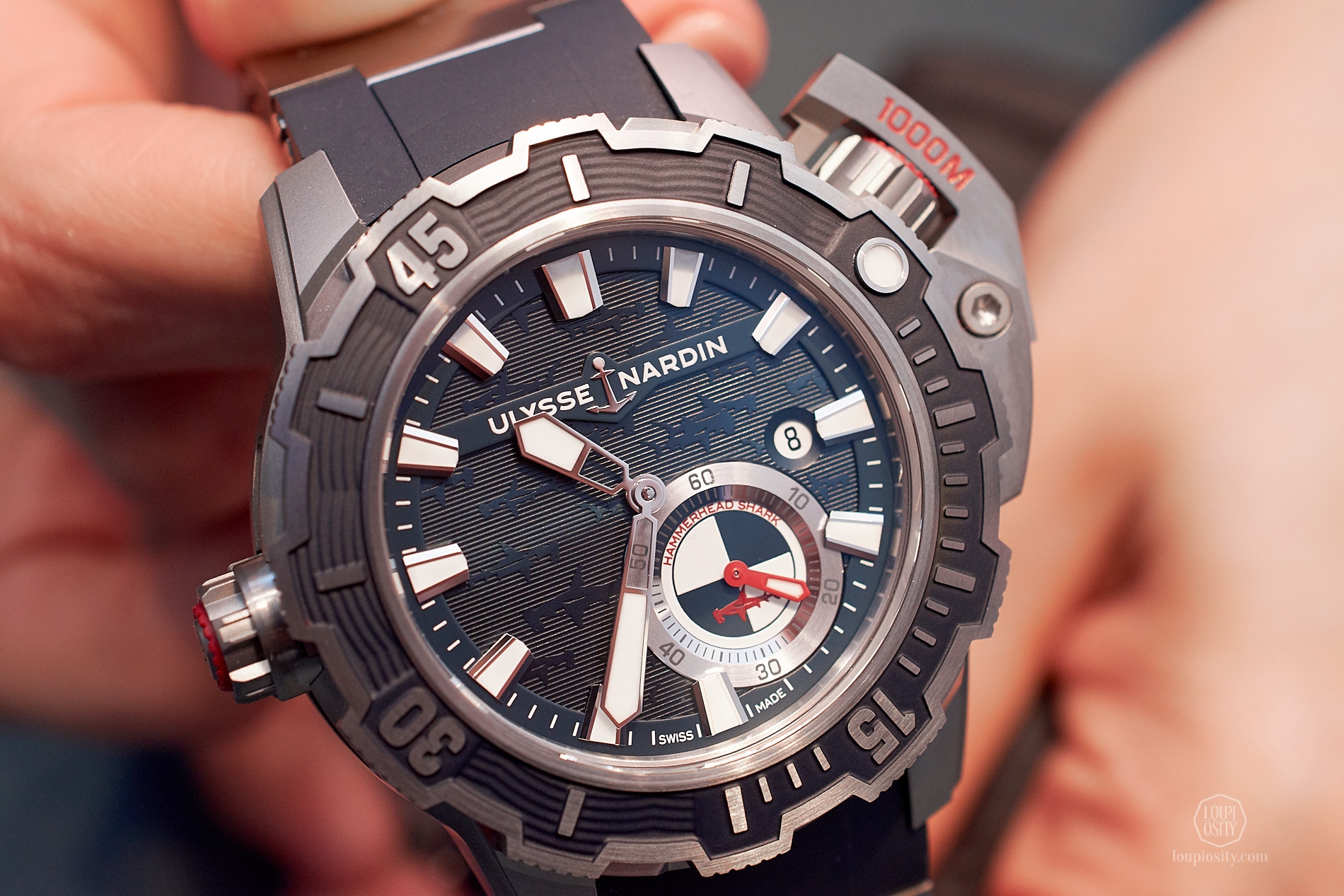 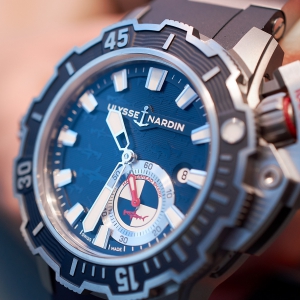 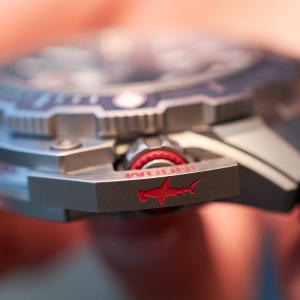 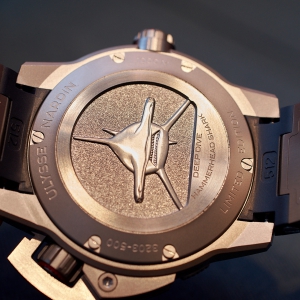