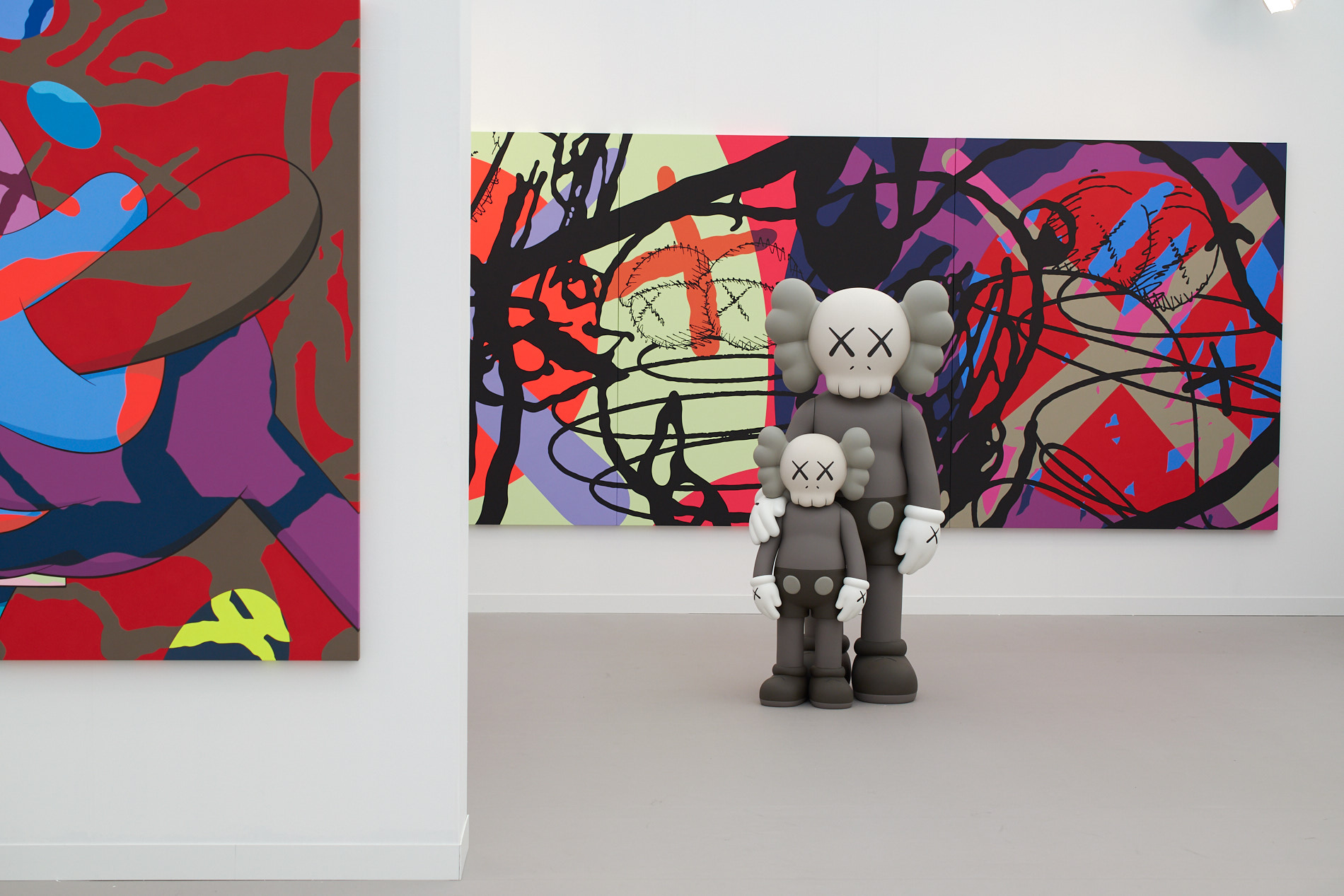 Many UK-based and international galleries present their portfolio at the Frieze Week. Frieze London introduces some of the world’s most significant contemporary artists – from the emerging to the established – in circa 160 galleries from 31 countries. Frieze Masters features six thousand years of art history from more than 130 galleries – visitors can find ancient and tribal art, Old Master paintings, medieval sculpture and 20th century masters here.

The two fairs are situated about 15 minutes’ walk from each other, which is a rather refreshing exercise in the Regent’s Park. However, if you feel like it, you can hop on the shuttle bus or take the VIP transfer service by BMW. (The BMW Group has over 100 cultural co-operations worldwide, including TEFAF and Art Basel.)

In the previous article I gave some background information about the events. This one is dedicated to a few galleries and artworks I saw at the Frieze London and the Frieze Masters.

Emmanuel Perrotin (born May 1968), is a French art dealer specialising in contemporary art. He founded his first gallery in 1989 at the age of 21, since then he opened galleries in Paris (currently four spaces there), Hong Kong, New York, Seoul and Tokyo.

The gallery participated at Frieze London with a solo show by KAWS. Born as Brian Donnelly in 1974 he is a New York-based pop artist and designer. He graduated from the School of Visual Arts in New York, having a Bachelor of Fine Arts in illustration. He started as a graffiti artist in the early 1990s and also worked for Disney as a freelance animator. He is widely known for his cartoon-like vinyl figures (the latest edition was just released here), acrylic paintings and large sculptures (one called the “Final Days” was exhibited at the Regent’s Park at Frieze Sculpture).

KAWS has also collaborated with Nike, Vans, Comme des Garcons and many more. Just like Takashi Murakami or Jeff Koons, he blurs the line between fine and commercial art. If you are interested in his style, discover more here about the evolution of KAWS’ Street Art aesthetic. 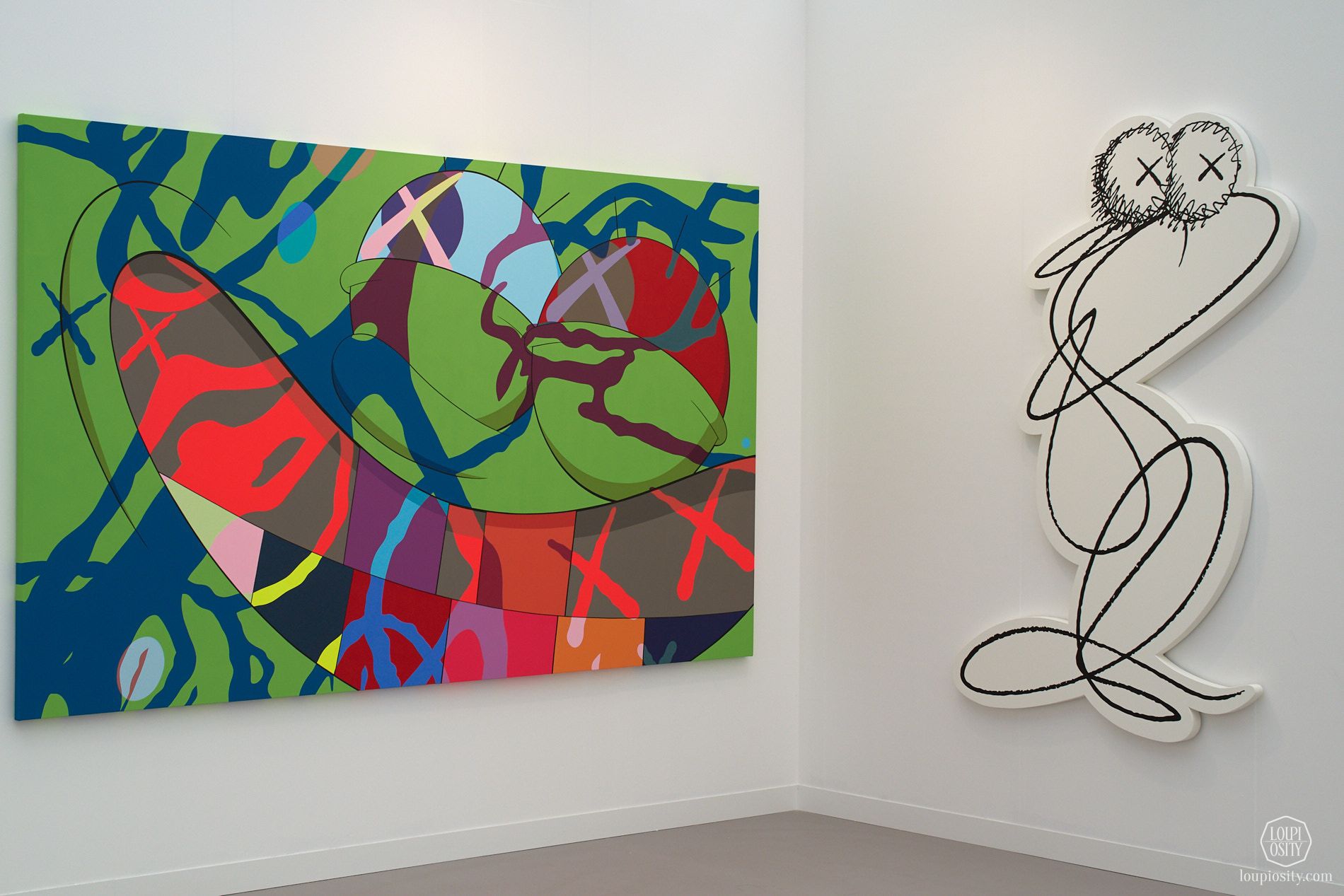 British Timothy Taylor founded his gallery in 1996 in London. His collection is presented spanning an almost 200m2 space in Mayfair and in another gallery in New York close to the High Line. Timothy Taylor is specialised in modern and contemporary art with artists like Alex Katz, Sean Scully, Kiki Smith and more. At Frieze, he put the works of Eduardo Terrazas on display.

Mexican Eduardo Terrazas was born in 1936 in Guadalajara. He started his career as an architect, but he oriented towards graphic design, typography, urban planning and fine art.

For the fashion freaks out there: he was the designer of the transparent Plexiglas balloon, which was the centre part of the iconic photo project of the American Melvin Sokolysky for Harper’s Bazaar in 1963. The series features models posing in a giant hanging bubble over the streets of Paris.

For Frieze London, Terrazas not only exhibited his works but he designed the booth as well. The collection included acryl paintings and wool yarn pieces. He collaborated with a Huichol craftsman (Native American people in Mexico). In his Tablas series he created artworks using a traditional folk process in which coloured yarn is woven into wooden panels and covered with Campeche wax.
His creations feature rhythmic geometric compositions, circular, octagonal and triangular forms and lines, many times in vibrant colour. 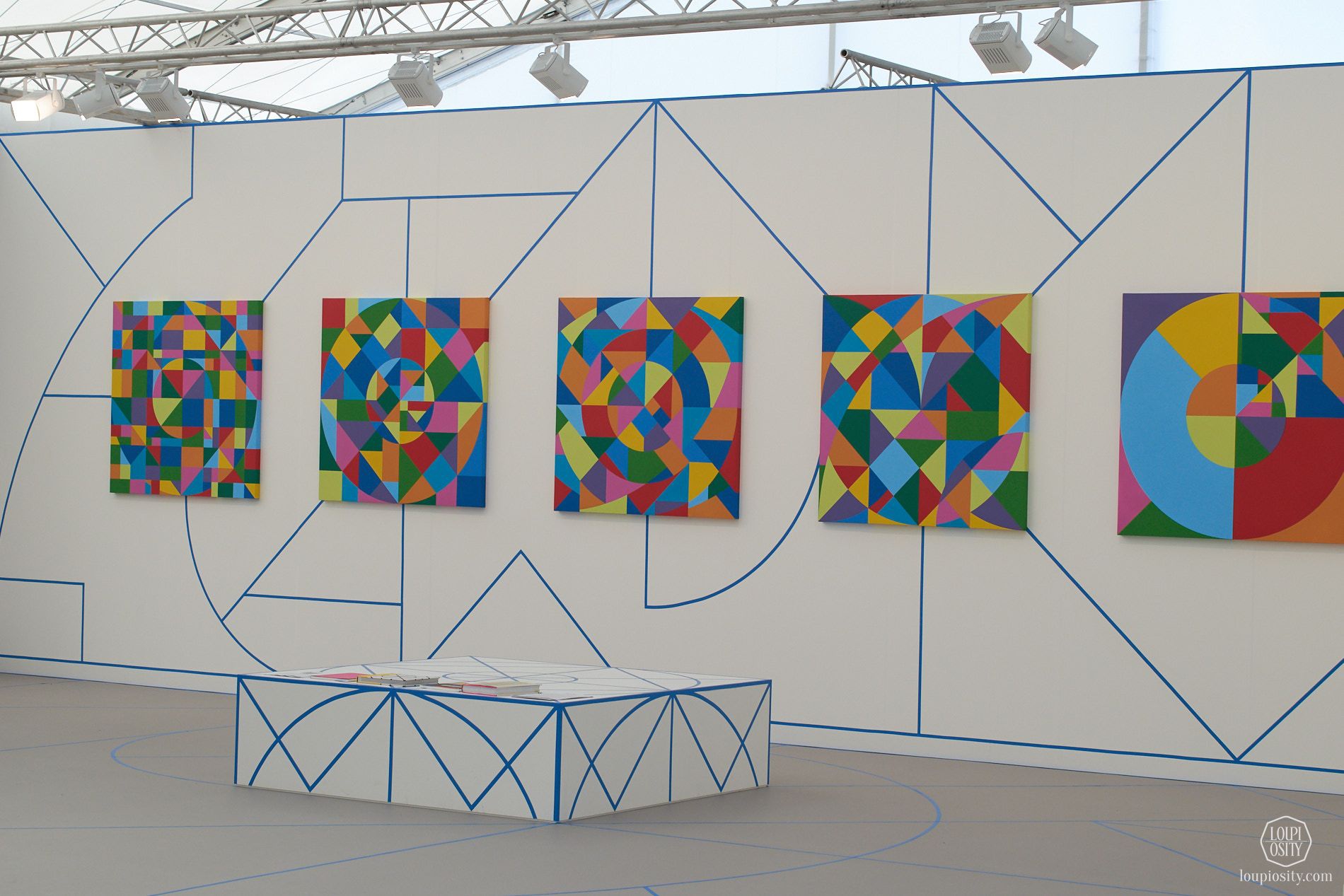 I first saw pieces from The Third Line at Art Dubai. It is a Dubai based gallery (located at Alserkal Avenue), founded in 2005 lining up a great spectrum of contemporary Middle Eastern artists.

Guggenheim and the global financial services company UBS has a joint, called the UBS MAP Global Art Initiative program to “challenge the historically western-centric view of art” with contemporary art from South and Southeast Asia, Latin America, and the Middle East and North Africa. It features a few of the gallery’s artists too, including Abbas Akhavan, Zineb Sedira, and Joana Hadjithomas & Khalil Joreige (curated by Sara Raza). This naturally brings an international recognition and institutional support to the gallery.

We selected two artists from them at Frieze London.

Hayv Kahraman is an Iraqi artist, currently living and working in Los Angeles. As the gallery describes: “Her work engages the viewer, utilizing elements of calligraphy, Italian Renaissance painting and illuminated Arab manuscripts to reflect on the placelessness and experience of diaspora, engaging aesthetic notions and codes of beauty to depict often psychologically brutal subjects.” Her artworks depict her own experiences about war and refugee life, the effects of war, the social position of women – difficult topics interpreted in an aesthetic way. Two oil works on linen were present for viewing from the “Get Direction” series: ‘Straight’ and ‘Right’. 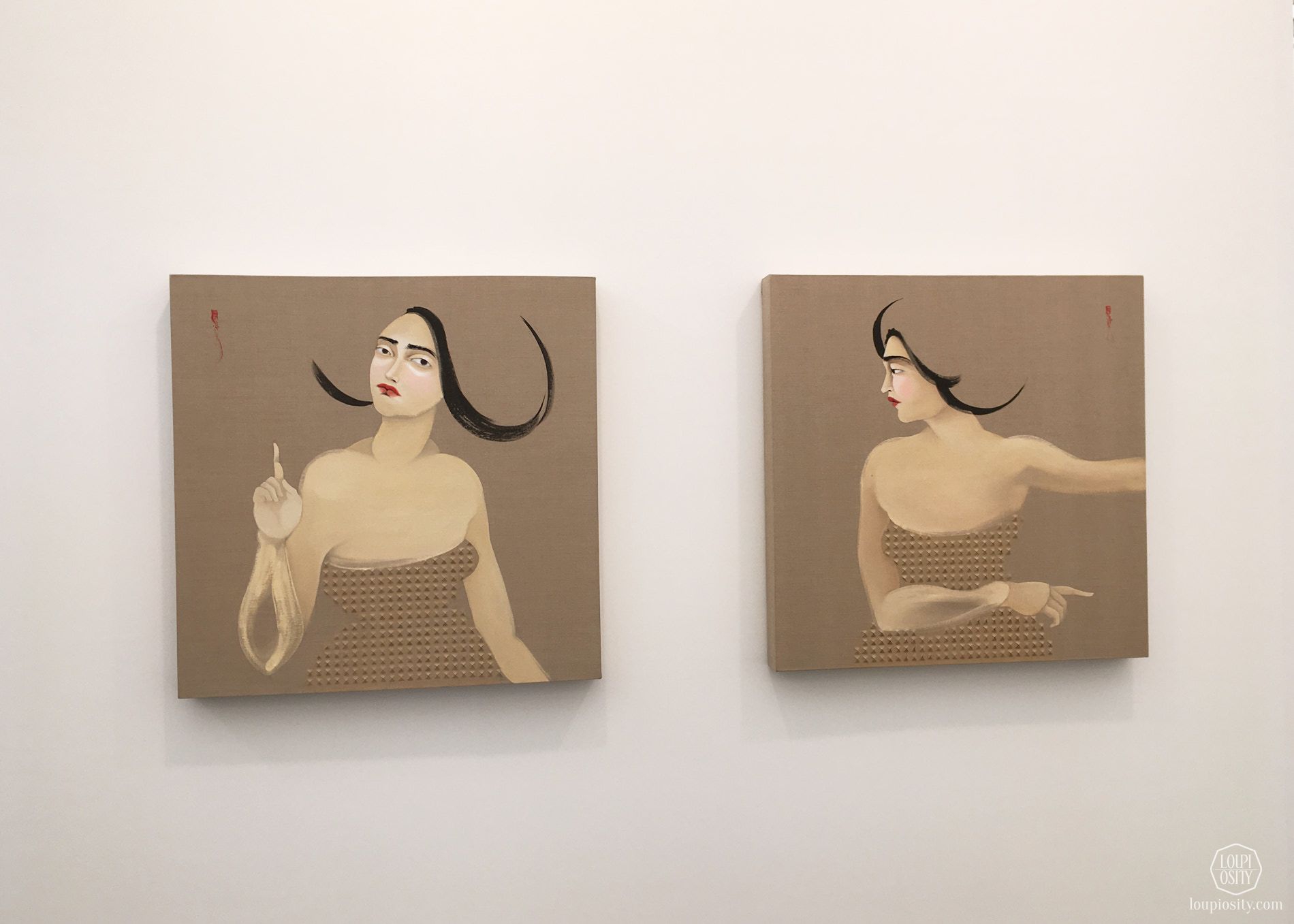 Amir H. Fallah was born in Tehran, Iran in 1979. He received his Bachelor of Fine Arts from Maryland Institute College of Art in 2001 and his Masters from University of California Los Angeles in 2005. His oeuvre includes painting, photography, sculpture, and installations. Duality is a motif of his art: his academic training and his graffiti experience provides an interesting background, and he mixes Iranian culture with American. 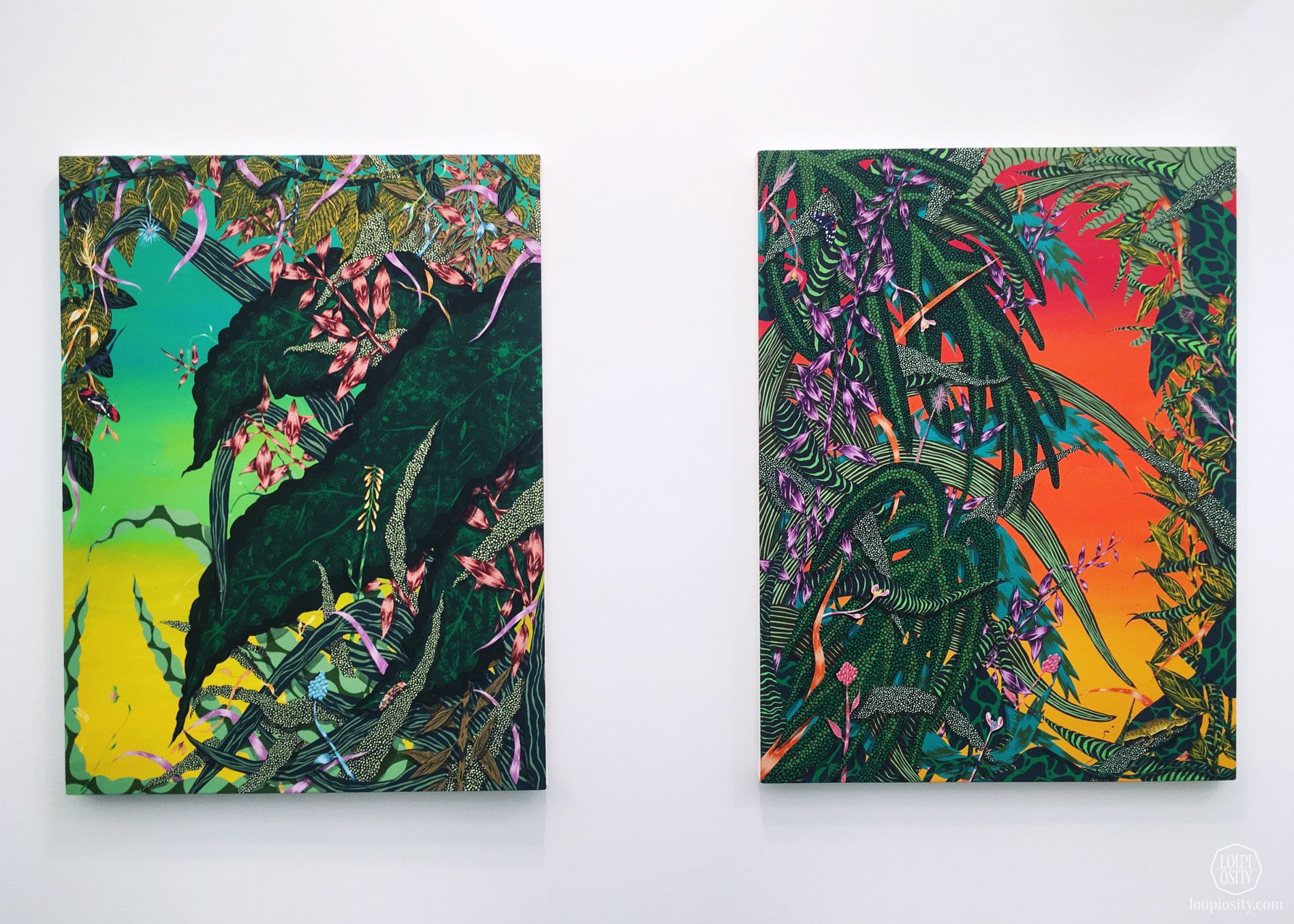 Fruits of the Frieze Masters

Acquavella had an impressive booth at Frieze Masters and they brought this Gaugauin painting, among many others.

Eugène Henri Paul Gauguin (1848-1903) was a French Post-Impressionist painter, sculptor, printmaker, ceramist and an important figure of the Symbolist movement. He was the contemporary of Camille Pissarro and Paul Cézanne and initially he worked in an Impressionist style. He was included in the fifth Impressionist exhibition in 1880, an invitation that was repeated later on. In 1888, he went on to Arles to try to establish an artists’ colony together with Vincent Van Gogh. He became disappointed with Impressionism as he felt the traditional European painting lacks creativity and it becomes more imitative. “Don’t copy too much after nature. Art is an abstraction: extract from nature while dreaming before it and concentrate more on creating than on the final result.” – he advised (Britannica https://www.britannica.com/biography/Paul-Gauguin).

He is particularly well known for his artistic experiments and works made at the tropical islands of Tahiti and Marquesas in French Polynesia. His bold, colourful and design oriented paintings significantly influenced Modern art movements and artists in the early 20th century including Henri Matisse or Pablo Picasso.

The exhibited “Nature morte aux pommes” is from 1890, shortly before Gauguin first travelled to Tahiti. The bright and warm colour palette fits well to his still-lifes and later to the Tahitian landscapes. Gauguin admired Paul Cézanne’s technique. He was also inspired by Cézanne’s still-lifes (like the “Dish of Apples” ca 1876 or Still Life with Fruit Dish, Apples and Bread ca. 1879) and interpreted the genre with his own pictorial vocabulary. 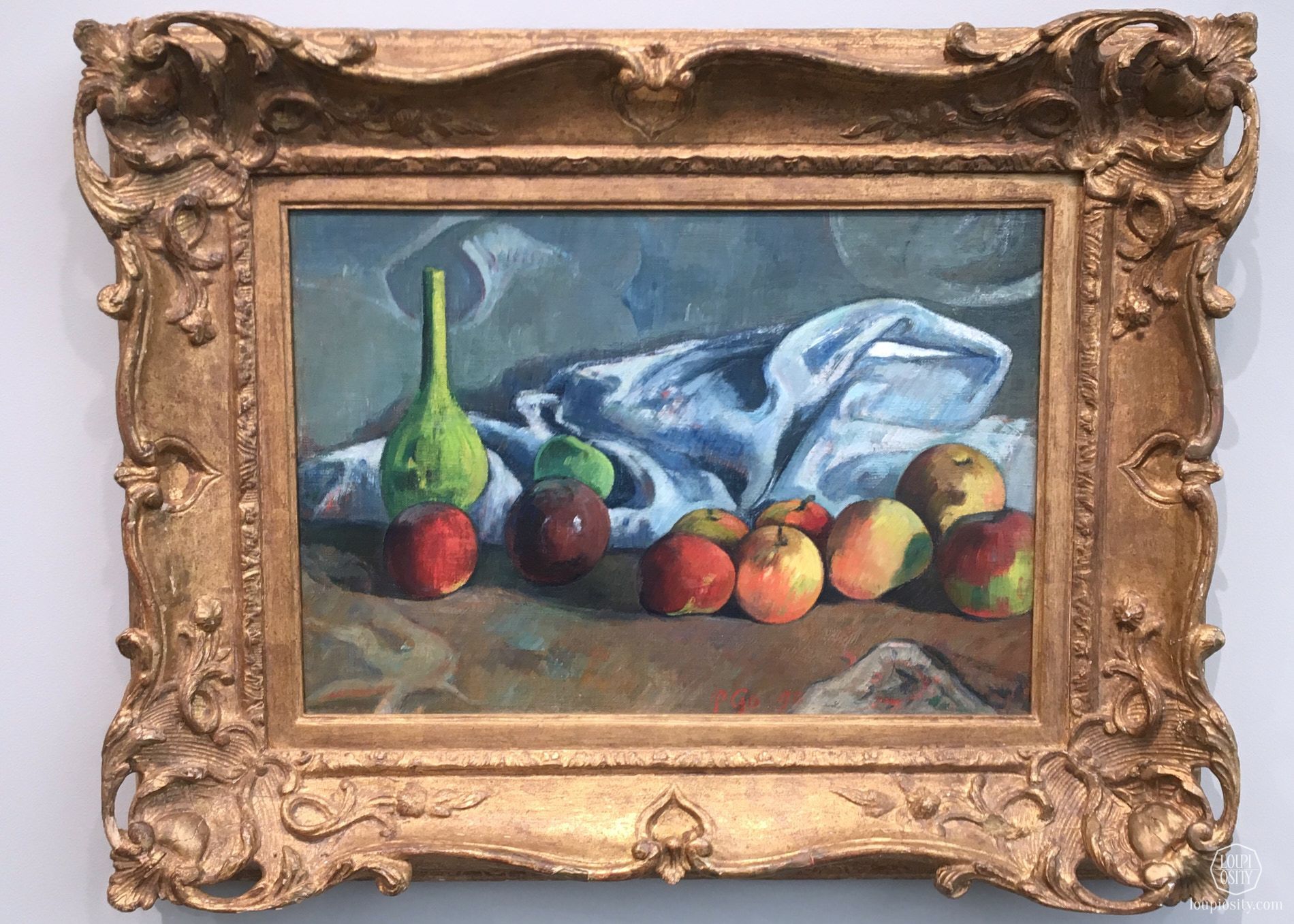 The art-dealer family business first opened in Paris in 1919 and then moved to Florence in 1967.
Jean-Luc Baroni has been known as a specialist of fine paintings and drawings by Old and Early Modern Masters. For over 15 years, he has been working from his gallery in St. James’s London.

Achille Laugé (1861-1944) was a Neo-Impressionist and Pointillist painter. He was intended to become a pharmacist, but he also attended Fine Arts school. In 1882 he joined the National School of Fine Arts in Paris. He was inspired by the works of Georges-Pierre Seurat, Paul Signac or Camille Pissarro. After his studies, he returned to south of France and remained there for almost the rest of his life. He frequently depicted fruits and flowers from his own garden, mostly in a simple and harmonious way. This “Still life with flowers” dates back to circa 1892. 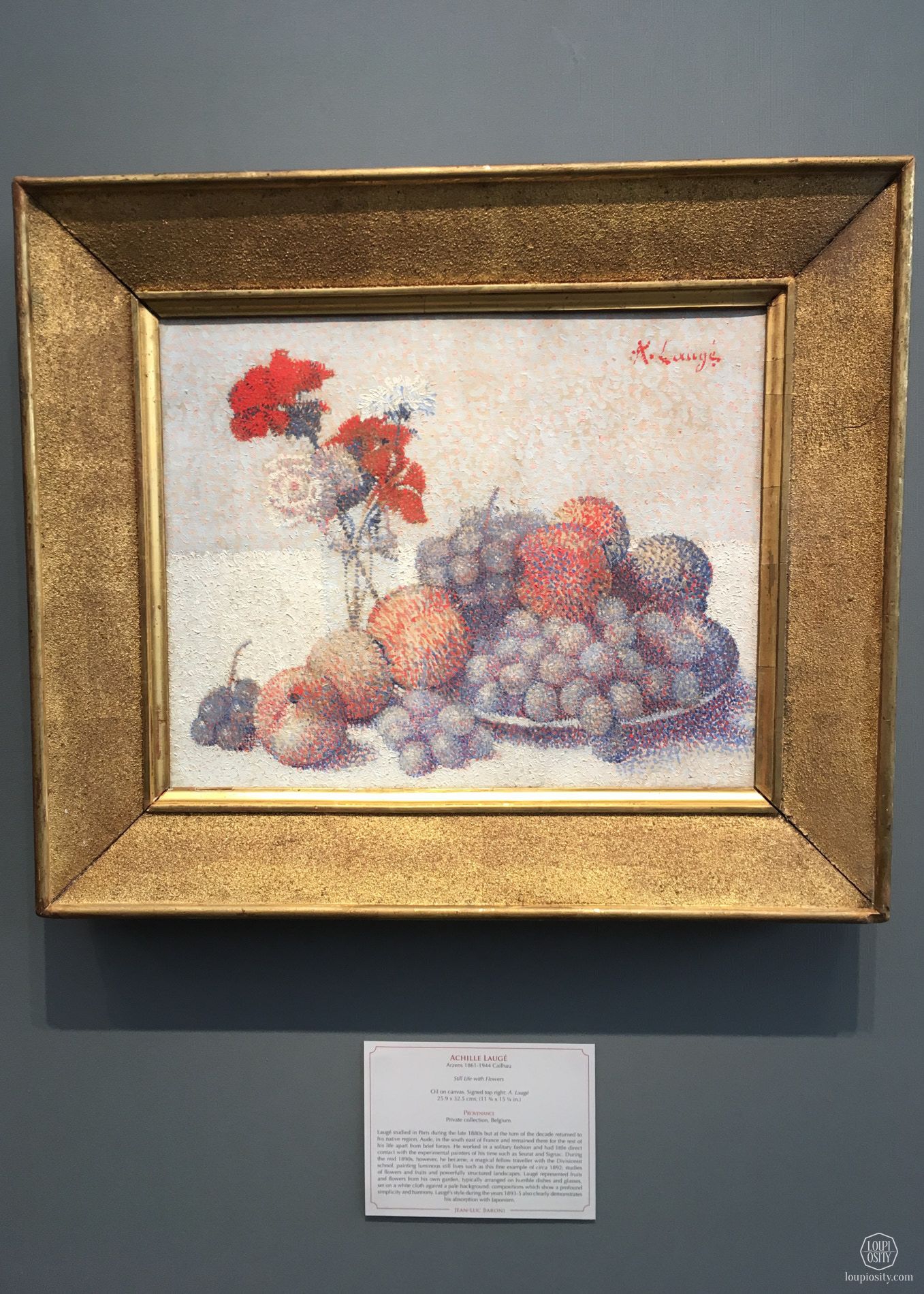 In 1977, Johnny van Haeften and his wife Sarah opened their gallery, specializing in Dutch and Flemish Old Master Paintings of the 16th and 17th centuries. He is one of the Founders of the European Fine Art Fair in Maastricht (TEFAF) and an earlier member of the Executive Committee (he has many interesting stories and views, which he shared in TEFAF’s interesting video series.) Earlier this year he gave up his London gallery at St. James’s, Mayfair and moved out to his Richmond Park home to sell by appointment only.

Ottmar Elliger the Elder was born in 1633 in Copenhagen. He travelled extensively to Antwerp, Amsterdam and Hamburg. He finally settled in Berlin in 1670, where he became a painter to the court under Friedrich Wilhelm von Brandenburg. Ottmar Elliger the Elder was primarily a flower and fruit still-life painter as it was particularly popular in seventeenth-century Hamburg. The current “A Garland of Flowers and Fruit surrounding a stone niche” depicts an ornamental recess in a wall with exuberant garland of flowers and fruit decoration. There is a small snake at the bottom ledge of the stone niche and a spider hanging from its thread, almost in the centre of the painting.

Still lifes by Ottmar Elliger are held in many of Europe’s leading public (and also private) collections. These include the Staatliche Museen zu Berlin; the Rijksmuseum, Amsterdam; the Kunsthalle Hamburg; the Gemäldegalerie Dresden; the Statens Museum in Copenhagen; and the Ashmolean Museum in Oxford. 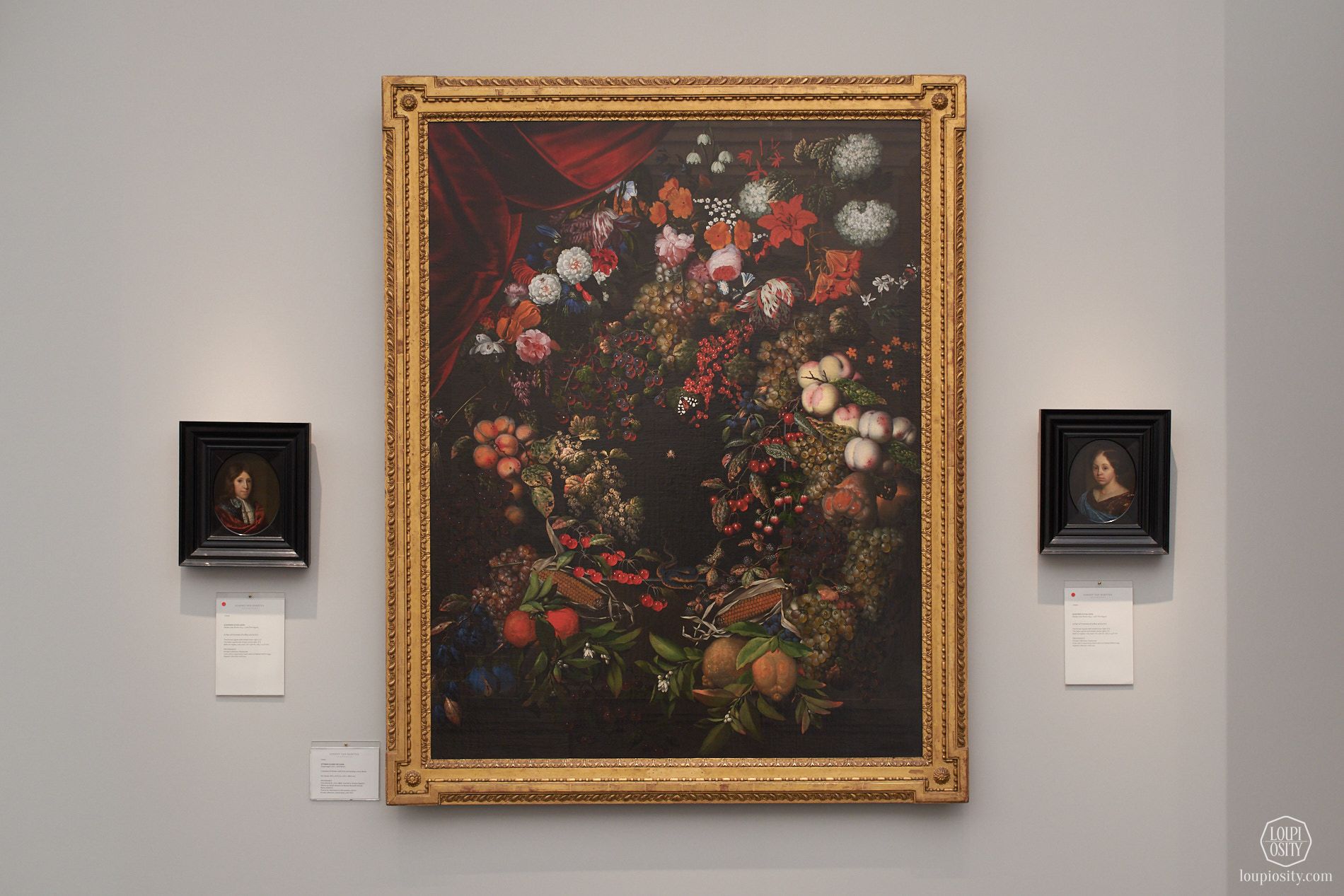 Finished with Frieze for now? Come on, let’s have a walk at PAD London too!

Photo credits: Loupiosity.com.
The photos were taken at the Frieze London and Frieze Masters 2017. All images used for illustrative purposes only. All registered trademarks are property of their respective owners.
All rights reserved.

Paris+ par Art Basel Paris+, by Art Basel is the newest fair for Modern and contemporary art, taking place October 20-23, 2022 in the French capital.Révélations Paris 2022 After many recommendations, we will visit Révélations in Paris for the first time this June. The biannual event is a prestigious showcase for the finest contemporary creations from France and abroad. Follow along with us!MB&F LM Split Escapement EVO At the Geneva Watch Days, MB&F celebrated their amazing achievement of creating 20 calibers in 17 years as an independent watchmaker. They also introduced the icy-cool blue/grey LM Split Escapement EVO and a special edition for the Beverly Hills MB&F LAB opening soon.